Whether it’s a lake, river or the open ocean, the surface of the water hides many secrets below, including changes in water depth, holes, drains and depressions in the bottom, along with structure such as weed, rock, oysters and timber.

It also conceals bait and schools of fish that are often attracted to this structure, as it offers shelter, food and a break from the current where there is flow. Polarised sunglasses cut the glare off the surface of the water, allowing you a sneak peek at what is below the surface. A depth sounder or Fishfinder is what truly opens your eyes to the world beneath the kayak.

For the many anglers that love the simplicity of kayak fishing, a sounder can seem a complicated option with its transducer and transducer cable, head unit, power cable and a battery requiring installation and management. For others, it’s not worth the weight and lack of portability when accessing hard to get at launch points or portaging from pool to pool.

When I stumbled upon the Deeper wireless Fishfinder for smartphones at one of the annual fishing expos, I got chatting with the guys from Deeper and was blown away with how far this portable technology had evolved. Needless to say, being the gadget freak that I am, I soon had one in my arsenal and was keen to get out on the water and put it to the test. 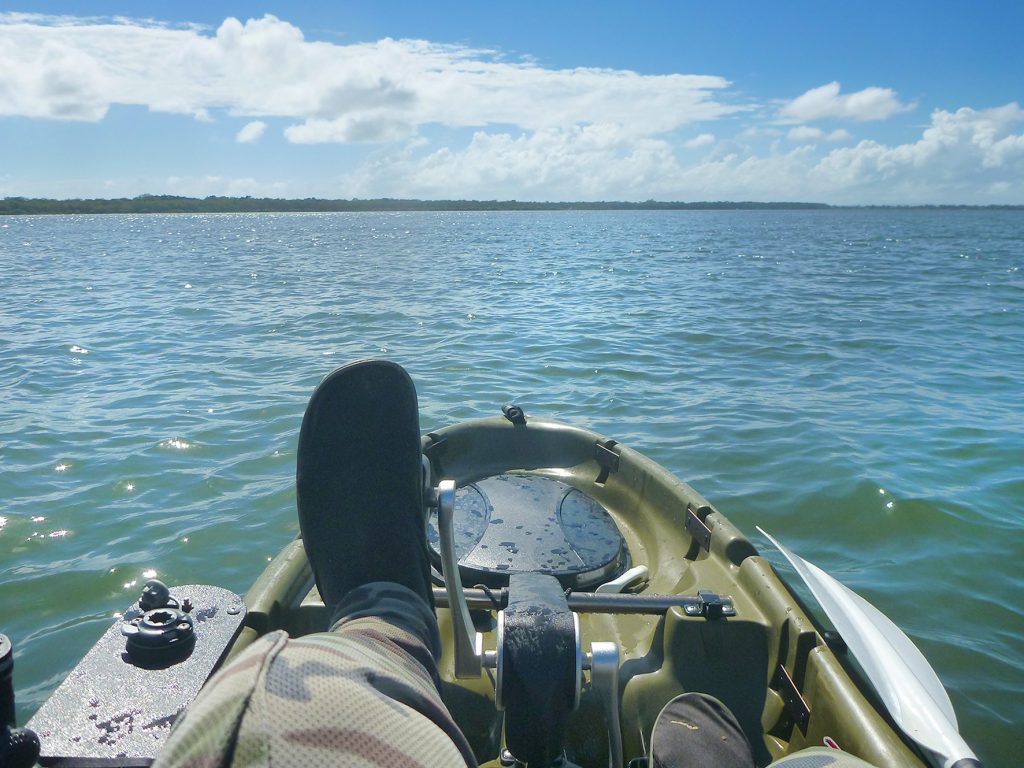 Without a sounder it’s just a big flat expanse. The sounder opens your eyes to what’s below. 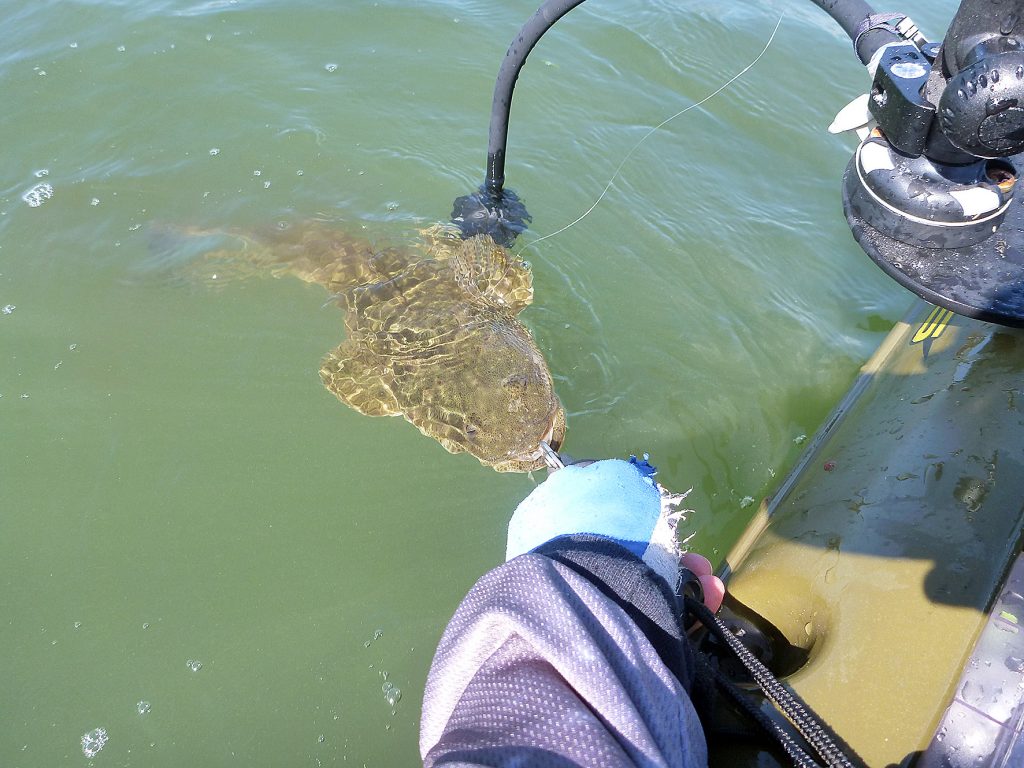 The author’s second challenge required the Deeper to find the sandy channel through the weed, producing this nice flathead. 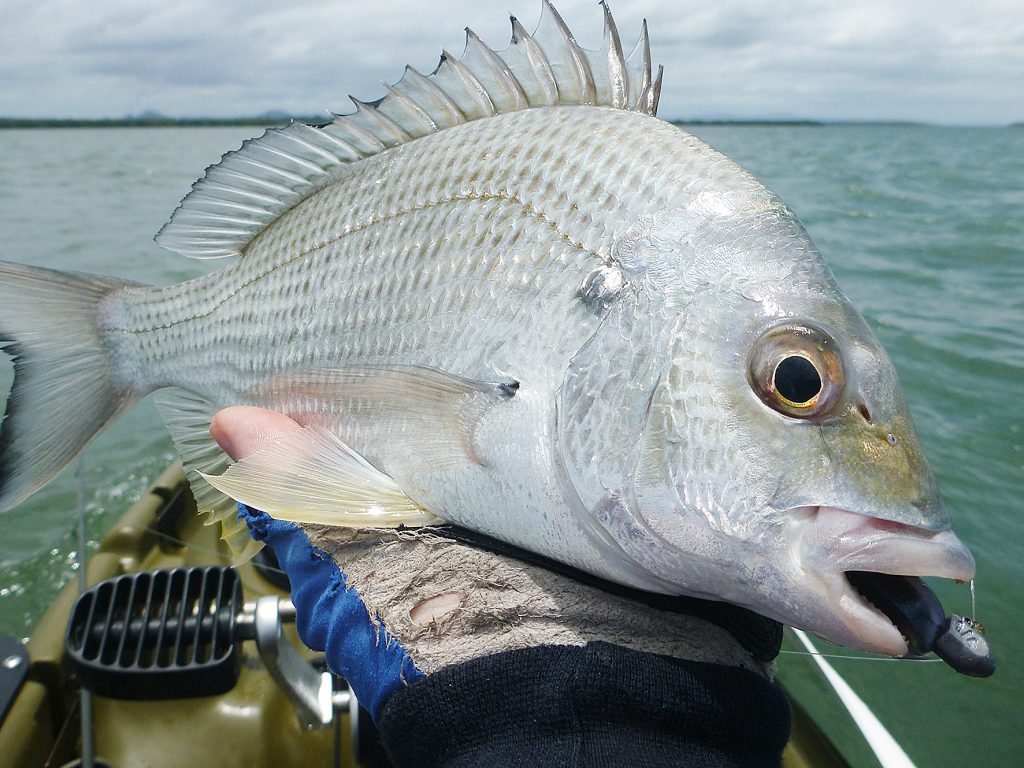 A bream landed from the sunken vessel located using Deeper. 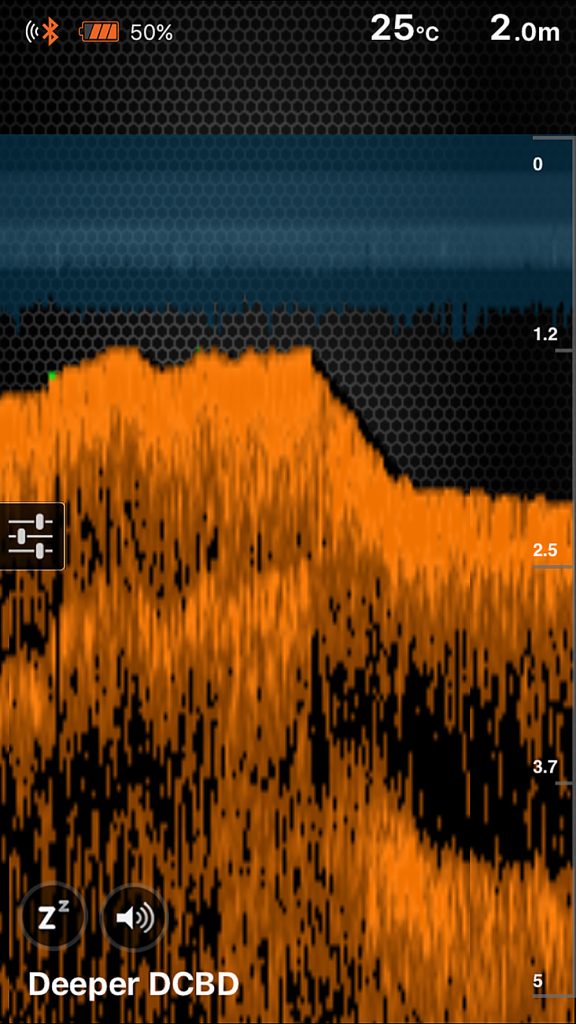 Drop off into the drain located and bream are on! 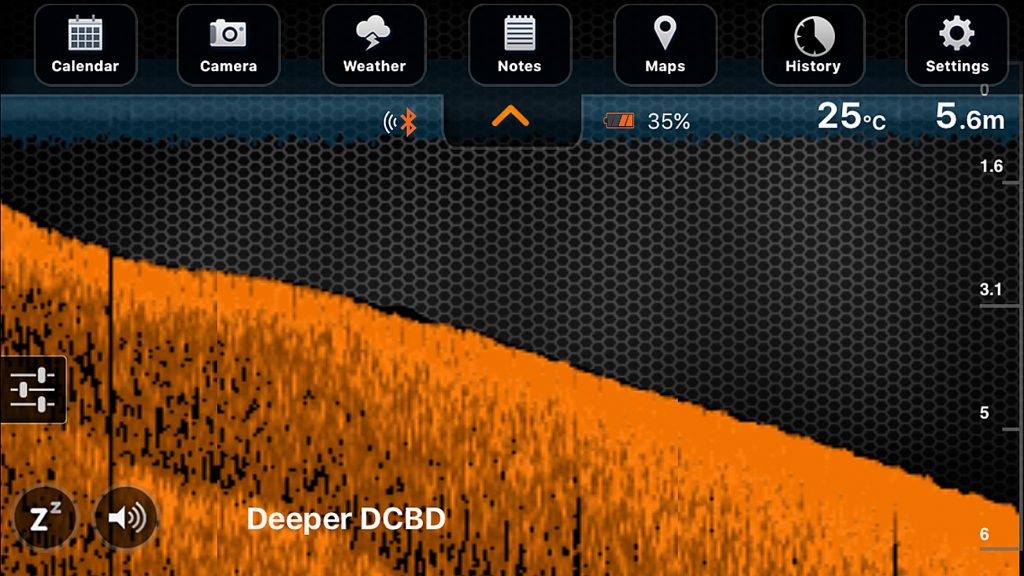 Water depth can change dramatically over a short distance. Deeper keeps you fishing the right areas. 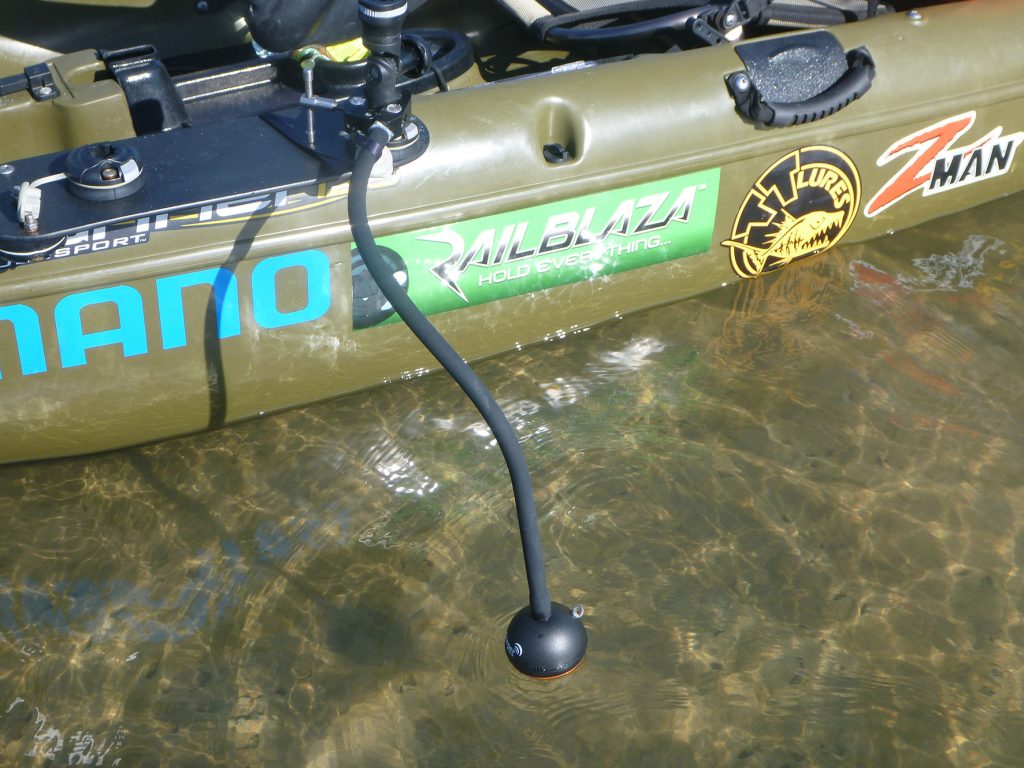 The Deeper is a simple and effective sounder option for kayak anglers. 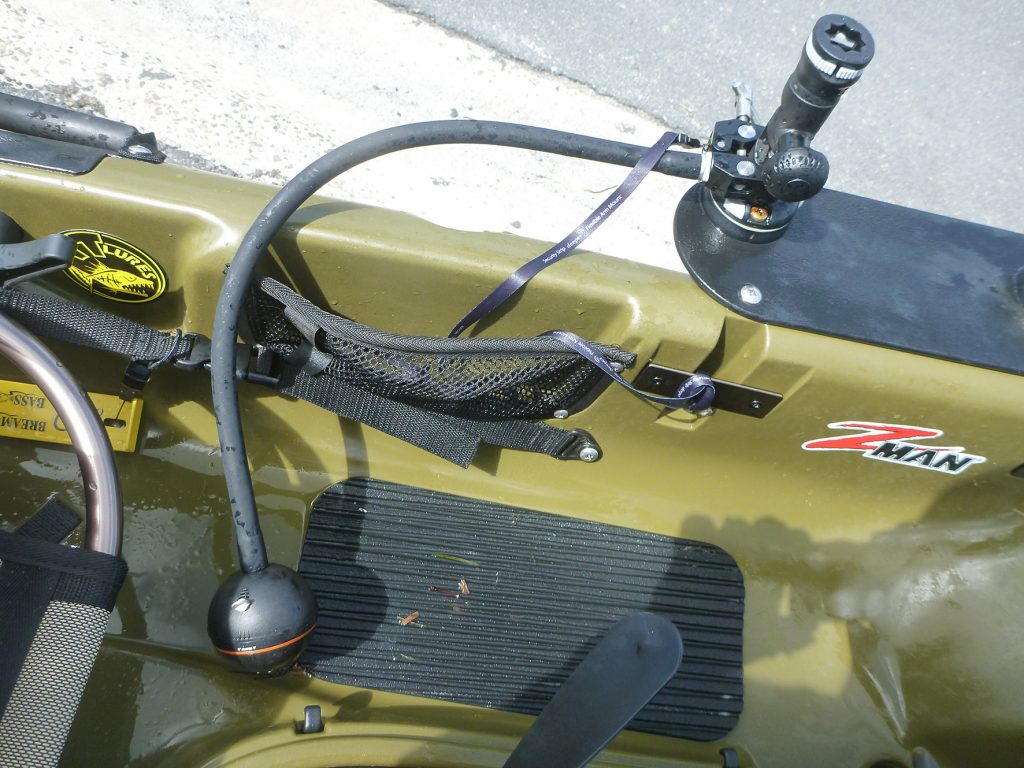 The Flexible Arm Mount allows the Deeper to be swung back into the kayak when not in use. 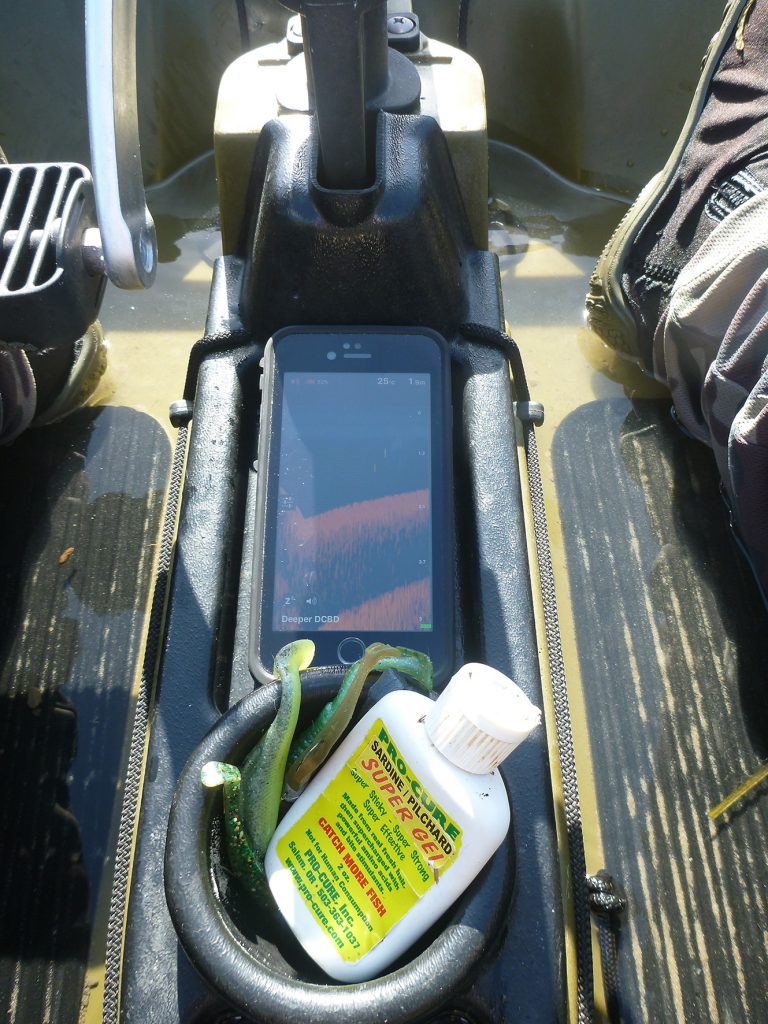 The smartphone in a Lifeproof case, connected to a Deeper. 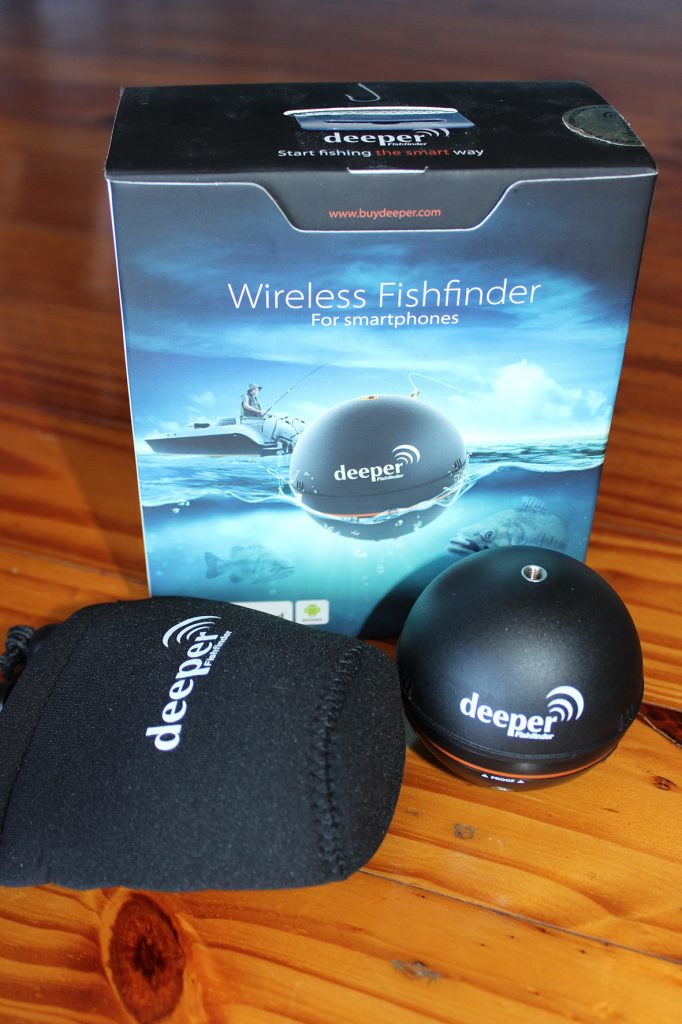 The Deeper, carry pouch and box – is that a sounder in your pocket?

Out of the box the Deeper wireless Fishfinder fits in the palm of your hand with its 6.5cm diameter. It only weighs 100g. It floats, allowing you attach your line to one of its screw in attachment points to cast it and map an area if you are land-based, or simply attach a cord and allow it to float beside the boat or kayak. I opted to grab their flexible arm mount that simply clamps onto the kayak. The Deeper then has a thread which screws quickly and easily into the other end of the arm. Then you bend the arm so the Deeper is positioned in the water.

I plugged the included cord into my home computer and unscrewed the two halves of the Deeper, allowing it to be plugged in to charge. It was then time to grab my smartphone and load the Deeper app. My smartphone was about to get even smarter, becoming the head unit of my sounder as it connects to the Deeper via Bluetooth. It’s a smart, simple and extremely portable system.

I can fit the Deeper unit in one pocket and my phone in the other if I’m heading on a fishing adventure. I can throw it in my luggage when travelling to locations where there’s a chance I can get my hands on a boat or kayak, or even fish land-based. I effectively have a high-powered Fishfinder that I can hold in one hand.

The setup was simple and I soon had my charged Deeper and a fully charged smartphone, in its Lifeproof waterproof case, ready to hit the water. I was looking for a quick and easy location on the kayak to clamp my flexible arm mount and the Railblaza Camera Mount, mounted on the kayak using the Railblaza StarPort system, was the perfect option.

I use this camera mount for taking photos using the timer while holding fish. With a little effort it can be rotated, allowing me to swing the flexible arm and Deeper in and out of the kayak as required. This is handy as the Deeper has two contacts on the bottom that power the unit up when placed in water.
By lifting the unit out of the water when travelling between fishing spots, having lunch or at other periods when it’s not required, you can extend the run time of the unit and also switch off your Bluetooth to conserve phone power. In saying that, I fished for a few hours each session on the water without flattening the battery. Remember when mounting your flexible arm to ensure it is clear of your paddle stroke before fixing it in position.

For performance, I was impressed with the detail and accuracy, as well as the operating speed of the Deeper. Within a few minutes I had worked out the basics of the app and it felt to me like I was looking at the head unit of a traditional hard mounted sounder. It was time to find some fish.

On my maiden voyage with the Deeper, the plan was to locate a boat that had sunk in recent months during a violent storm. Find the structure, find the fish. I soon located the sunken vessel, positioned the kayak to cast up current, past the structure and retrieve my small paddle-tail plastic naturally back past the structure with the water flow.

On the first cast I got a tap. Second cast, I was hooked up to a reasonable bream. After six solid bream and two smaller ones in an hour I was convinced that the Deeper was going to find me plenty of structure, bait schools and fish.

The plan for my second session with the Deeper was to really put it to the test, with an hour on the water to find a bream and a flathead for this article. It was half tide in, far from my favourite tide and I would use the Deeper to locate a drain that crosscuts a large flat that I fish, with the hope of throwing a few casts up the drain in search of a bream. With the Deeper as my eyes, I drifted the flat until the bottom dropped away and I was in the drain.

I then repositioned the kayak to fire my casts up the drain and retrieved the little paddle-tail back with a few hops, followed by a slow roll with the occasional twitch. My second cast got a solid take from a fish that bolted out of the drain and into deeper water.

There was plenty of current as the tide built toward a big high and this fish was giving a good account of itself. A couple more runs and I was surprised to see a cracker bream come up yakside. A quick photo and the 34cm fork length fish was returned to the water for someone else to catch. I was all smiles and the first half of the plan had come together.

With only an hour on the water available before I had to be somewhere else and almost half of it gone pedalling to and locating my drain, and catching the bream, I headed over to fish for flathead on a large weed flat. My plan here was to use the Deeper to locate a sandy drain that runs through the weed flat, allowing me to cast plastics up the length of the drain without fouling in the weed.

At first I attempted to position the kayak without the sounder, simply using landmarks to try and locate the gutter. I found weed, weed and more weed. I then used the Deeper to locate where the weed gave way to clean, sandy bottom and it’s surprising that even when using landmarks you can be a good couple of casts away from where you need to be.

After half a dozen casts and no touches in the drain, I was beginning to second guess my choice of location and then on the eighth cast – clunk. I love that feeling of a flathead nailing the plastic as it is paused, after a couple of hops up off the bottom.

The flathead took off across the weed and as it came to the surface I noticed it had swallowed the plastic right down. This creates a lot of tense moments as the flathead plays up close to the kayak and the leader begins to wear. Just keep its head under water so that it doesn’t start shaking it like crazy and wear through your leader in seconds.

Finally the flathead was in the net and unfortunately it had been hooked deep in the gills and was bleeding heavily, so I opted to take it home for dinner. I would normally release a fish in the high 50s, preferring to keep the smaller fish from 45-55cm and leave the larger breeders to their business, but there was a high chance that this fish would not survive a release. I began my paddle home and within a few minutes the alarm sounded to signal the end of my fishing time, mission successful.

Having a depth sounder on the kayak had definitely improved my chances of finding fish and allowed me to locate the structure and bait that often leads to a successful session. I enjoyed the portability and simplicity of the Deeper, but also the speed, power, display and effectiveness of the unit when combined with a smartphone.

This is a legitimate, DualBeam sounder option and an excellent sounder option for kayak anglers. Now I think I’ll pull out the instruction manual so that I can learn about all of the other features of the Deeper, including calendar, camera, weather, notes, maps and sharing. Whether you keep it simple and find a few fish or explore all of the features this unit has to offer, it’s worth looking… Deeper. For more information, check out the Deeper website at www.deepersonar.com.

Turning to the dark side

Kayak selection and fit out

by Justin Willmer • With Christmas done and dusted there will be plenty of new kayaks out on the water, and also plenty of anglers looking for a post-Christmas kayak bargain from their local retailers. […]

by Justin Wilmer • Last year I wrote about chasing crabs and crayfish from the kayak. There’s no doubt that the kayak is an ideal vessel for chasing crustaceans. You can launch anywhere, travel across […]