In the last few articles I have emphasized the need for potential boat owners to have a very close look at their fishing needs prior to making a decision on a new boat. As part of the last article, I discussed the pros and cons of owning both alloy and glass craft and, in fact, I was actually drawing upon my own fishing life. Unable to decide exactly which boat would suit us best, we had two – glass and alloy!

A typical week might mean a Monday morning bay run for some pelagic or sub surface action in the 5.5m Galeforce centre console followed by a fast Friday foray to a favoured bass or barra dam for some fun with the fly rod, where the 4.3m TABS tiller steer would be in a starring role.

Owning two boats, naturally, is not very practical. It was fun at the time, so long as the money tree remained in fresh foliage. And even though I tried to overlap their usage, it was as fanciful as it was impractical.

The smooth riding glass Galey with it’s 90hp E-Tec was a bullish boat for impoundments – less is more in small waters – yet the centre console setup was a top treat when travelling for hours on the bay or moving out through the seaway for a sunny morning’s billfish trolling. On the other hand, the tiller steer alloy TABS Bullshark punt with it’s 40hp E-Tec was top dollar for dams and creeks, but hardly the best boat for a run to Tangalooma’s beacons at daylight.

Still, the impracticality of owning two boats saw me frequently speculating how good it would be to have just one boat for our fishing. These thought processes always accelerated when it was time to pay dual boat/trailer registrations and insurance policies. 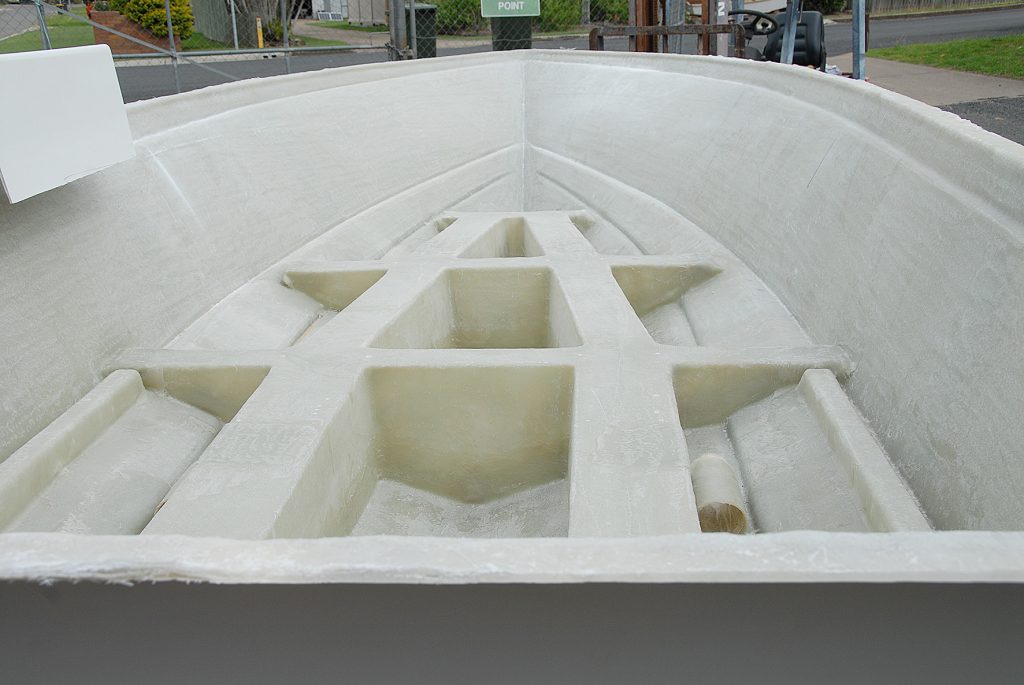 Massive box sections under the Galey’s floor ensure hill rigidity at all times. 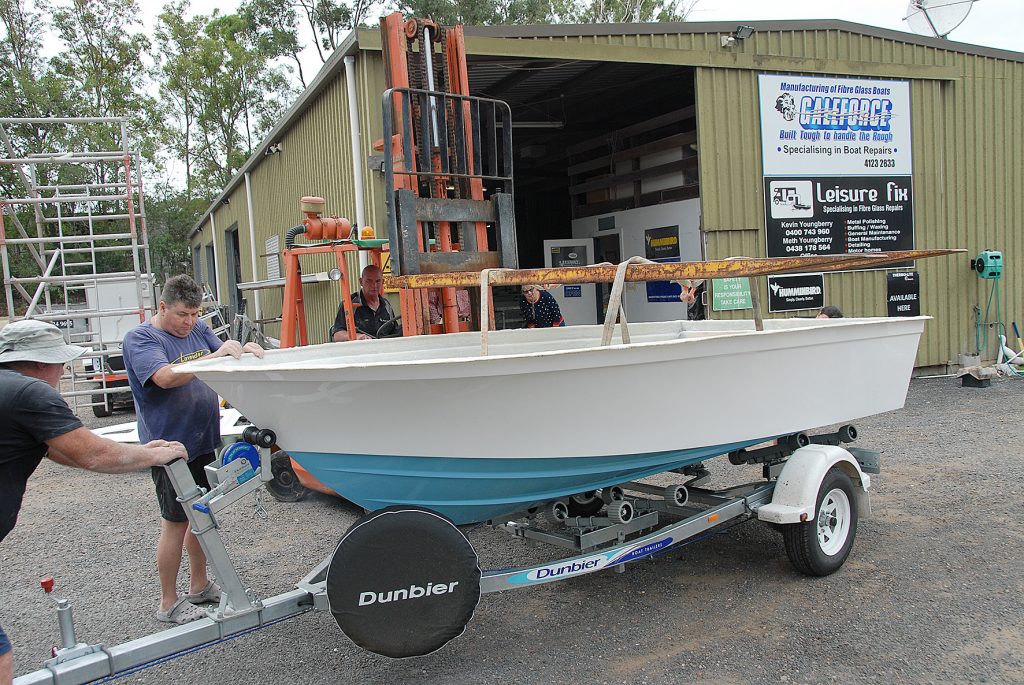 Settling onto the Dunbier multi roller trailer. The sky blue toning is just the ticket for a stealth approach to pelagic fish. 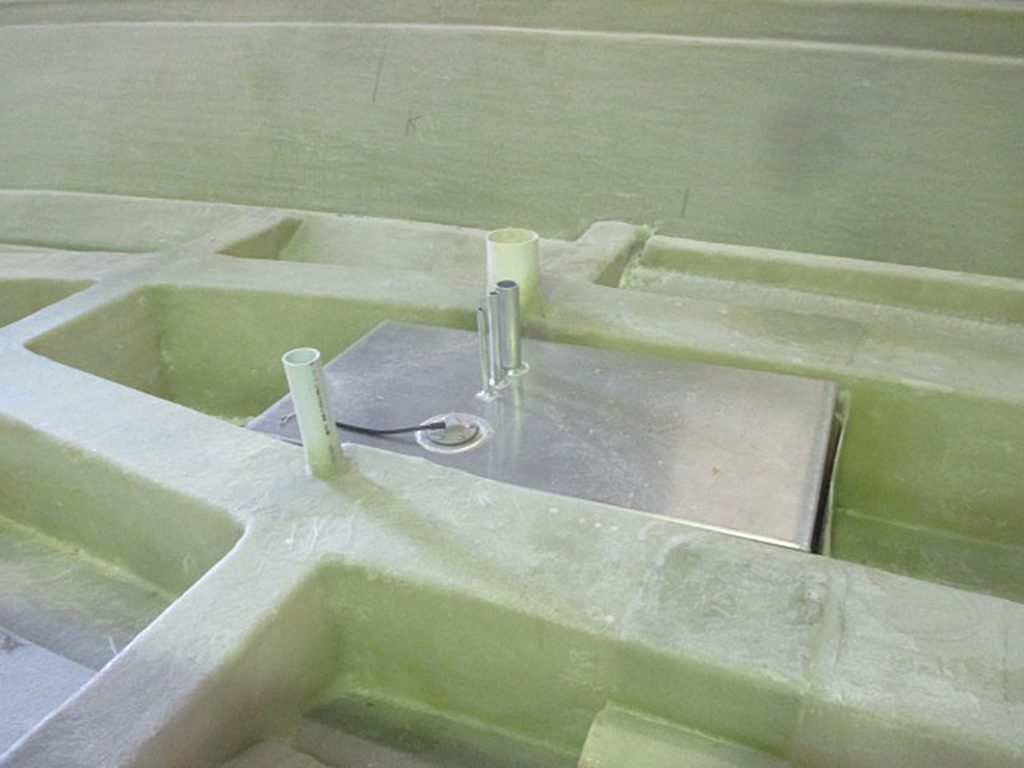 The new craft’s 80L fuel tank is firmly within its capsule to ensure it cannot rub or chafe throughout the boat’s life.

One boat for bay and impoundment

One boat for both scenarios would see fishing needs best satisfied with a craft somewhat around the size of the punt – fibreglass if possible – with enough freeboard and sea keeping ability for work in the bay and even the largest impoundment, and with enough fishing room for my wife Denise and I to enjoy things without being in each other’s way. This latter requirement can also be translated as ‘not hitting each other with big barra flies!’

Those criteria needed to be enhanced by ease of launching and a size small enough to see us sneaking into subtle sections of dams or corners of creeks for our beloved barra. All boats involve compromises, but there was no disputing that ride quality and sea keeping were high on the list, along with some storage room and a practical layout.

A conversation with Kev Youngberry of Galeforce Boats, Maryborough, on an entirely different matter, rekindled my interest in a smaller glass rig. Kev and I spoke of perhaps adding a 4.5m Galey to his line up. For the record, I have owned three Galeforce craft – a 4.8m and two 5.5s – and with over two decades of boating reviews for this and various other magazines in my wake, I figured I knew a good thing when I was aboard it.

I regarded the Galeforce ride as top shelf. The handling was spot on and stability at rest from the deep vee hull was never an issue, as large reversed outer chines and a central planing plank imparted excellent degrees of stability at all times to the 21° vee hull. The plank also enhanced low speed travel as well.

A usually dry ride, courtesy of plenty of above water flare in the bow area and 800mm high sides, was par for the course in all three of my centre console rigs.

Can the 4.5 be a centre console? Why not? From the dimensions Kev gave me, I considered the 4.5 Galeforce to be small enough for dam work, yet big enough for the bay. And, best of all, it wasn’t going to ring-bark the money tree to get it home.

Our boats left for new homes in due course and during the construction time some solid liaison between Galeforce and myself sorted out all those things that can make a good boat even better. I couldn’t have chosen a more agreeable or accommodating boat building team. Kev and Meth were right on the ball during our initial discussions, which covered a lot of ground, mainly sorting out what I wanted to use the boat for and how we could best accommodate those plans.

Success is in the details

A white hull with blue bottom was mandatory as I firmly believe that matching the sky’s colour under the hull had allowed us to sneak very close to feeding pelagics in the past. At times I actually had macks hit the hull of the 5.5 Galey with its sky blue bottom. You just don’t get closer to feeding fish than that!

Moving on to more of our requirements, a moulded bracket and associated wiring for the Mercury Xi5 electric motor would cater for our stealthy dam work, a double console (with screen and rails) provided handy storage plus some slipstream protection underway.

Add an 80L under-floor fuel tank, thanks. I wanted it set up for hydraulic steering with paired floor seat spigots and a 20” transom to accommodate a 75hp Evinrude E-Tec. A Keel Shield on the bow will protect the bow’s gel coat on boat ramps and gravel dam verges.

When I later turned up with a stainless steel leaning post for the forward casting platform, Kev immediately discussed where he could source spigots to take the two upright lower sections. No argy bargy – let’s do it!

Only a couple of compromises

One item for major consideration was whether we would have a self draining floor or opt for a big sump at the transom and a 600 GPH bilge pump to take care of any rain water. We decided on the sump/pump combo as the way to go. Raising the interior floor level so that a self-draining system would be viable did not appeal to me. I opted for an interior freeboard of 500mm instead.

One item removed from the list was the seat (containing a storage compartment) in front of the centre console. It would be nice to have it, but for a two person fishing team, it would be superfluous. Its removal would allow the console to be moved forward to better balance the craft.

The front deck, incidentally, escaped compromises. It sported an anchor well up front and two opposing storage compartments with water-tight hatches. Further back at the rear of the deck was a full width foam-lined ice box large enough for mackerel and tuna with a floor tilted skilfully to the drainage bung to facilitate cleaning out after the catch was removed. A little thing like that can sure make a good boat better!

The screen and shelf equipped centre console would house the Lowrance Carbon 12 sounder. Forward controls for the 75 E-Tec were side-mounted on the console. All Denise and I needed to enjoy travel time would be a couple of swivelling pedestal seats. And some windcheaters too!

As I saw it, we would have a near-perfect rig for our main fishing requirements: launching at a bayside ramp at sparrow chirp and mooching around Moreton Bay to look for some surface action would be as easy as snugging the Dunbier trailer to the tow bar and towing the rig to a barra or bass dam for a few days of freshwater action. There is a lot to like about this boat and further down the track we’ll have a closer look at just what makes our smaller fibreglass fishing rig fun to own and fish from.

Scones in the camp oven

by Wayne Kampe • The main ingredients for this culinary masterpiece can conveniently be found on the supermarket shelves neatly packed and ready to go. You will also need a fair-sized camp oven, a trivet […]

Get ready for south Queensland bass

by Wayne Kampe • Cooling weather and shorter days means that bass are following their age-old breeding patterns and getting together in big numbers to do what comes naturally. Being totally freshwater though, these fish […]