As we move towards the coldest months, one of the best ways to warm up is to get out on our coastal rock ledges. Rock fishing is much more energetic than sitting in a boat, kayak or on a chair by the riverbank. At this time of year the fishing is great.

A number of different species are active along the rocks at this time of year. Tailor, salmon, bream, drummer, trevally and more. However, my lifelong rock fishing favourite, the humble luderick (blackfish), is one of the more reliable species right along the NSW coastline.

It’s hard for me to nominate the precise reasons why I enjoy fishing for luderick so much. It probably has a bit to do with the tackle being quite different from most other forms of fishing. The techniques used are also reasonably unique. Once you’ve gotten the hang of it, success is very consistent, so failed outings are rare.

Of course, to achieve consistency, a number of factors come into play. Like all forms of angling, location is critical. Put simply, you’ve got to go where the fish are. The next step is going there at the best times and then using tackle and techniques that get the job done. The more precise and refined all of these things are, the better the results will be. 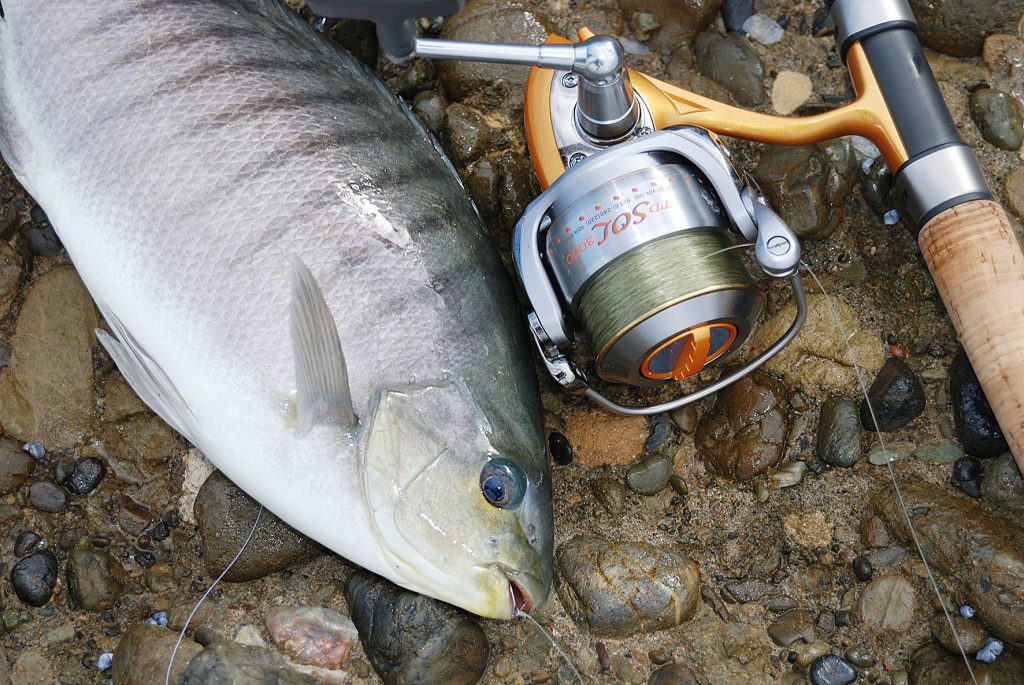 This fish took a bread bait just under the surface. Although generally regarded as a bottom dweller, luderick often feed closer to the surface. Keep an eye out for them. 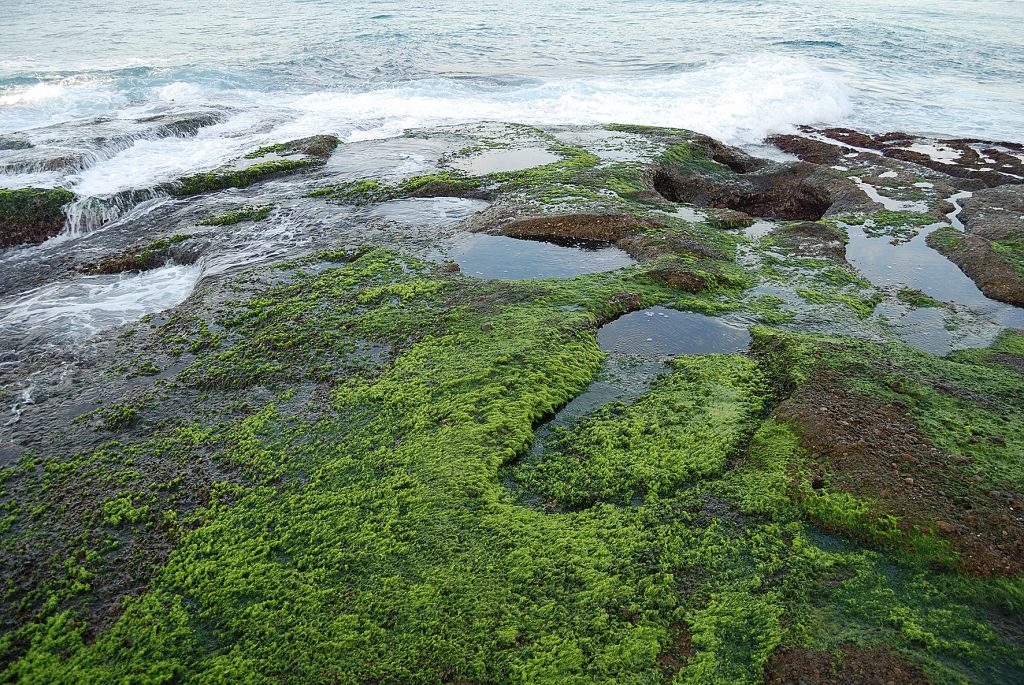 Look for ledges with a healthy covering of green cabbage or weed over them. Luderick should be in the vicinity. 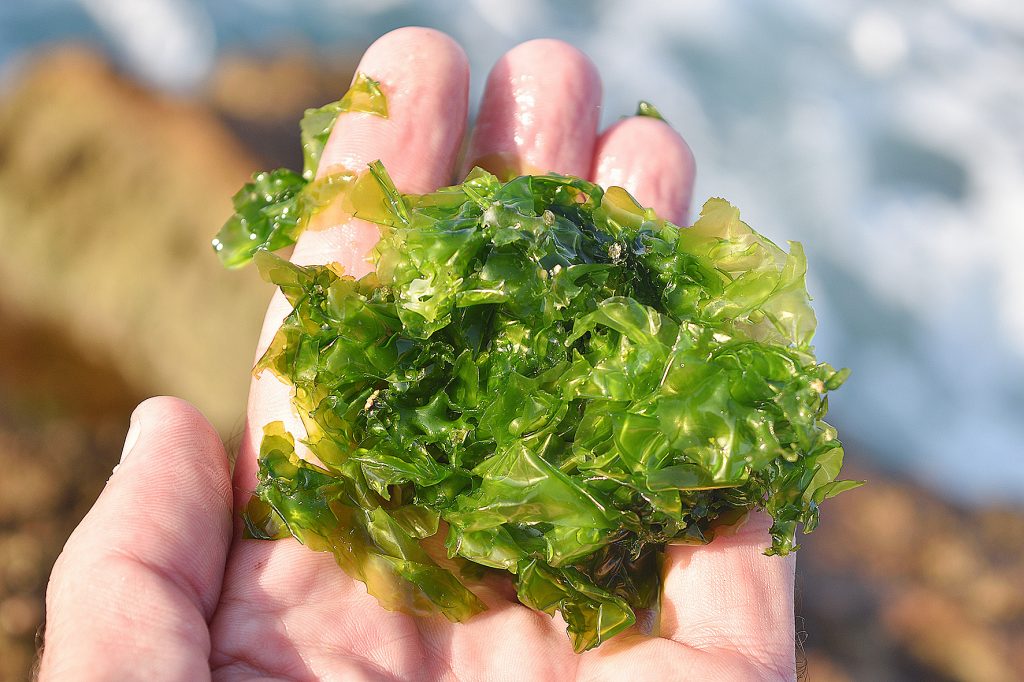 For the most part, green cabbage, more correctly known as sea lettuce, is the number one bait when targeting blackfish from the rocks. 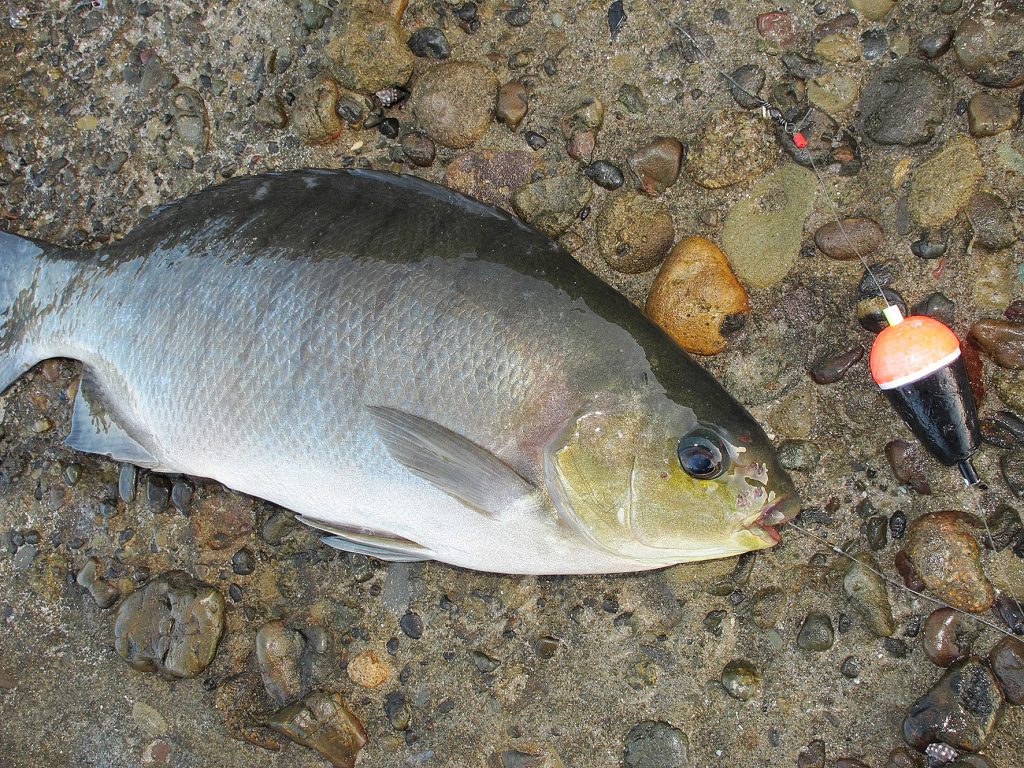 A small bobby float was used here. This fish took a green cabbage bait close to the rocks under some washy white water. 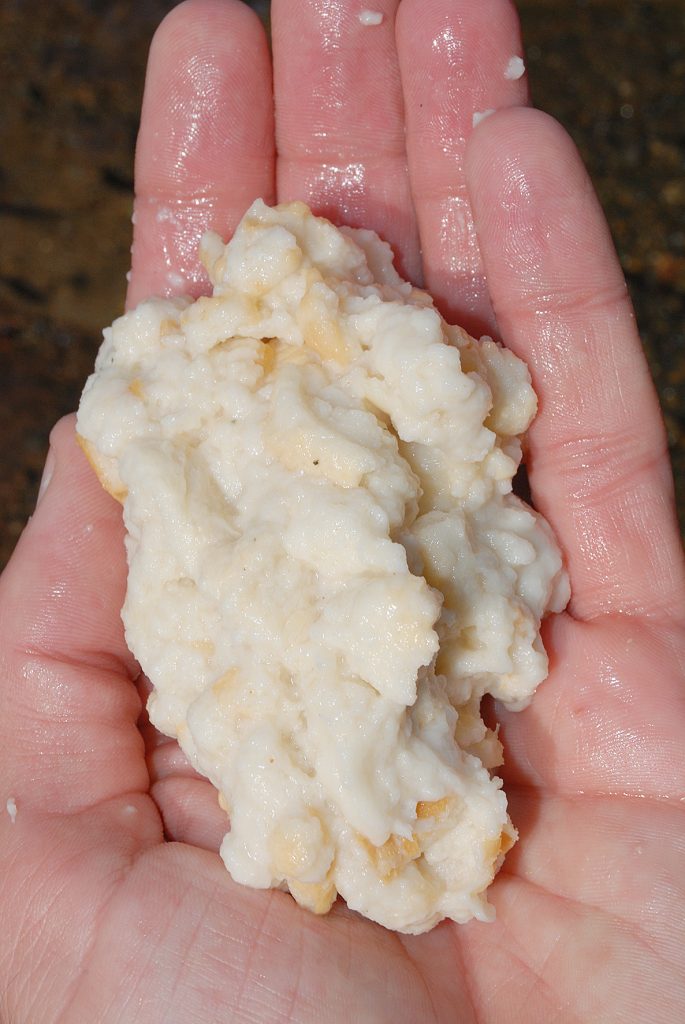 Some white bread mashed up with water makes a great berley, which can really turn luderick on. A small bread bait cast out in the same spot is likely to receive attention quickly. 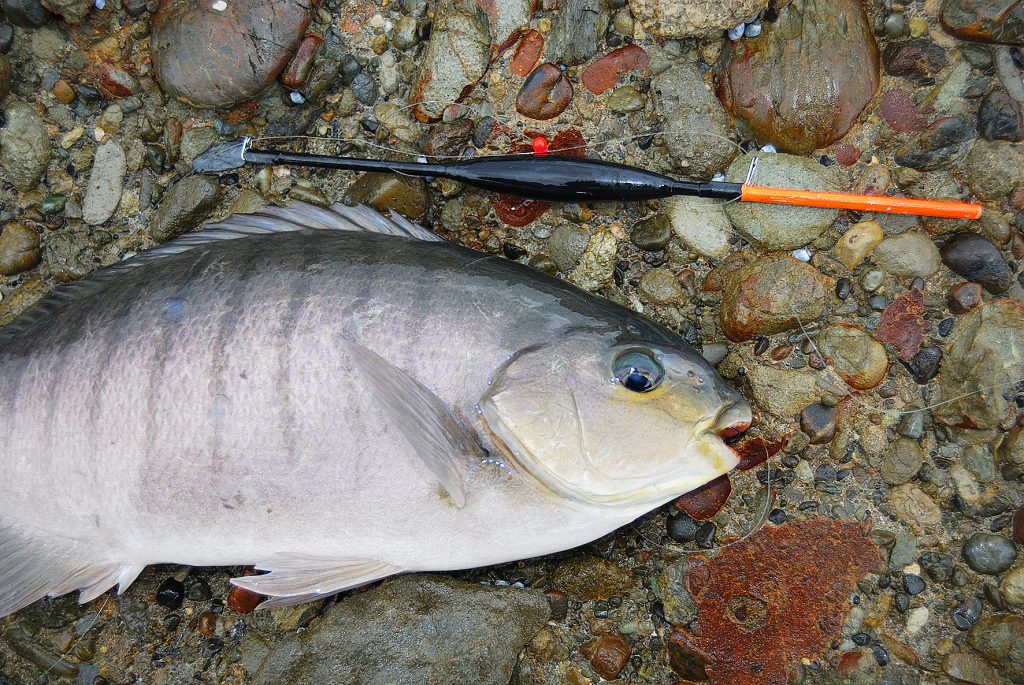 A brightly coloured tip on a stem float stands out from a distance and this is particularly helpful in slightly rougher or washy sea conditions. 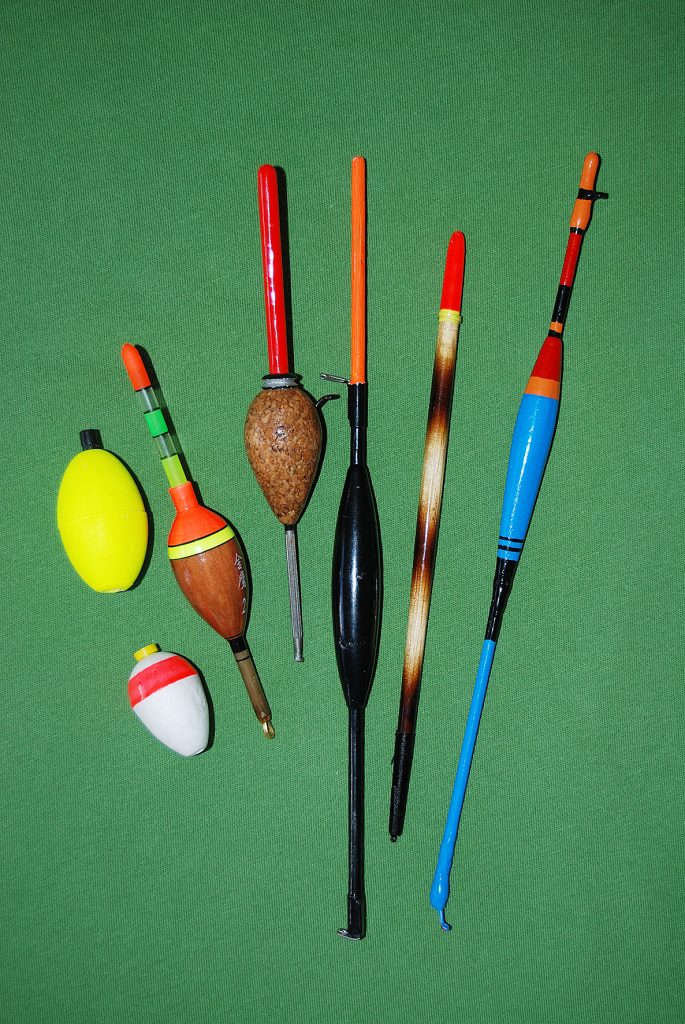 A variety of different float types or styles can be successfully used for this sort of fishing. Simple foam bobby floats are very cheap, but larger stem style floats are preferred by some experienced luderick specialists.

Traditionally, luderick tackle has largely been based around old British coarse fishing gear, used over the decades for fish like carp and barbell in the UK. Early luderick enthusiasts in the 1940s and 50s took their British rods, reels, lines and floats and put them to work on their new target species around Sydney and the coastal fringe of the eastern seaboard.

Rods were long with a soft action, and the main type of reel used was the centrepin. Slender timber or quill floats suspended small baits of green weed, which drifted over likely territory until a fish bit and took the float down. While these early basics remain largely unchanged, 2017 tackle is obviously much more advanced than it was over half a century ago.

While good rods suitable for luderick fishing probably aren’t as common in Australia as they used to be, there are still some high quality rods on the market that are perfect for the job. When it comes to rock fishing though, the first concern is length. Depending on where you’ll be fishing, a 3m rod is probably a good starting point. However, lengths between 2.9 and 4m (9’6” and 13’0”) are worth considering.

Longer rods are beneficial when fishing rougher seas or in places where rocks slope out in front of you. In spots protected from the main force of the waves, where the ledge may drop straight down near your feet, a shorter rod works well.

These days, a good luderick rod is still relatively soft in action or slow in taper, much like the rods of yesteryear. However, due to much more advanced materials and components used, a modern luderick rod may be a third of the weight and much more comfortable in the hand.

Traditional centrepin reels are still used off the rocks but, thanks to Alvey, that older style has been greatly improved with modern technology. It’s purpose-built for the harsh world of rock fishing. When fishing in places where salt spray is common or the reel may get the occasional dunking, an Alvey will stand up to the punishment.

Having said that, a small to mid-sized (2500-4000) threadline or spinning reel offers a lot of flexibility. I tend to use threadline reels off the rocks if I know that a longer casting distance is required, or if I want to cut the rig off and switch over to bream or perhaps start casting a small lure around for tailor or salmon.

Both nylon mono and braided line can be successfully employed for luderick off the rocks. It largely comes down to the type of reel being used or personal preference. With a sidecast or centrepin, mono is generally the better option, while a good quality, fine diameter braid makes for pretty good, hassle-free fishing with a small threadline reel.

A 4kg mainline should do the trick in most situations, but if black drummer regularly turn up at your chosen fishing spot then stepping up to 5-6kg line could be a better option.

When using a braid mainline I’ll go for a nylon mono leader about the same length as the rod, and my choice for the leader is then 9lb or 12lb Schneider Klear mono. This works more as a shock leader, and increases the odds of landing fish. Down at the business end, a fluorocarbon leader is still useful as a trace from a small black swivel to the hook.

On the subject of hooks, sizes from 4-10 can be used, with a size 6 or 8 being the best most of the time. A wide variety of styles and brands will do the job. For many years I’ve stuck with the Mustad 4190 pattern, although in more recent times my preference has leaned towards Gamakatsu ISO fishing hooks.

On top of that, a selection of floats, small sinkers, split shot, little black swivels, rubber float stoppers and small rubber or plastic beads complete the tackle kit. It may sound like a lot, but in reality it works out a lot cheaper than a pile of bream or bass lures!

You don’t always need a float to catch luderick, but it’s generally accepted that the most successful technique is drifting small weed or green cabbage baits under a float. The running depth or length of line between the float and the hook depends on how deep the fishing spot is. As a rough guideline, the bait needs to drift a metre or so off the bottom, without snagging up on rocks or kelp. If the water is about 4m deep, you should set the distance between the float stopper and hook at around 3m.

Luderick don’t always feed down deep though. In fact, it’s not uncommon for them to feed closer to the surface, under foamy scum lines or floating debris. There are times when a bait set only 30cm under a float can be quite successful. In other words, there’s a lot of variation in what a suitable running depth should be.

What is consistently important is that the float is weighted or ballasted so it goes under easily when a fish takes the bait. If a luderick feels much resistance, it’s likely to spit the bait out. When rigging up, add just enough sinker weight between the trace and float so it occasionally bobs under the surface as waves roll through. It may take a bit of practice, but after a while you’ll become familiar with how much weight is suitable for each type of float.

Look for rocky points, outcrops or ledges with a healthy covering of green cabbage or green weed, and luderick should be in the vicinity. Of course, it’s also important that your fishing spot is safe. Most weedy ledges are low to the water and cop some waves or whitewash spilling over them in big seas or around high tide.

Although some of the more experienced rock hoppers will confidently fish with water washing around their feet, the higher, drier ledges are usually safer. My main strategy is to look for higher spots right next to those low, weedy ledges. This way you can be fishing in the right spot, yet remain dry and safe.

A decent pair of polarised sunnies is a must when chasing luderick off the rocks. Quite often they can be spotted zooming around below the surface, and they’re easier to see in places with a clean sandy bottom and just the odd rock or clump of reef here and there. Fish often gravitate around a single large rock, and they’re not hard to spot if you keep an eye out for them. Obviously, this helps when figuring out where to cast or allow the float to drift.

Most of the time green cabbage is the best bait for this sort of fishing. In some spots the more filamentous, long green weed may be common on the rocks, so it will also be an excellent bait. In either case, it’s important for the bait to be well secured to the hook, not too big or too small, and look reasonably natural.

Here’s a little trick to keep in mind. If you’re confident the bait is good and everything else seems to be right and you’re still not getting any bites, try changing the bait every 10-15 minutes. Even though it still looks good and fresh to us, it’s surprising how many times I’ve taken the bait off and cast a new one out only to catch a fish instantly.

Another excellent bait is white bread. With a little bit of white bread mashed up with water and thrown in as berley every so often, luderick and others like bream or drummer can be encouraged to feed more aggressively. Once a few fish are seen swimming around or even smashing bits of floating bread, a small bait cast towards the main area of action is generally taken without hesitation.

As with all forms of fishing, chasing luderick off the rocks takes a bit of practise, and the more you do it the more you’ll learn. As long as you remember that safety is the highest priority when rock fishing, you’re sure to enjoy what the rocks can offer through the cooler months.

by Gordon Macdonald • With the cooler weather upon us, it shouldn’t be long before the luderick turn up. With last year being one of the best seasons for many years, anglers will be keen […]

For the love of land-based cod

by Robbie Alexander • It is not necessary to own a boat of any kind in order to access fantastic Murray cod fishing these days. Gone are the days where you needed a boat to […]