Since the Hobie’s humble beginnings in the 1950s shaping surfboards, the company has been synonymous with innovation and quality. Introducing a range of revolutionary products over the decades, no brand has impacted the kayak angling fraternity more than Hobie with the introduction of its Mirage Drive pedal propulsion system in 1997. Anglers quickly saw the potential of this new technology and in 2001, Hobie released the Mirage Outback, a purpose designed angling kayak that allowed anglers to propel the kayak using leg power, freeing up their hands to cast and retrieve.

In 2009, Hobie went bigger and better with the introduction of the first Mirage Pro Angler 14. With its introduction they created a truly remarkable kayak that gave rise to tournament kayak angling across the globe. Over the years, Hobie have continued to upgrade various components, but the hull remains relatively unchanged since its initial release.

This year I was fortunate enough to qualify for the Hobie Bream Series Australian Championships, held on the Gold Coast at the end of October. Each year, Hobie Australia provides all anglers who qualify for the championships with the latest model Pro Angler 14 for the duration of the tournament, so at this year’s event, competing anglers were the first in the country to test the 2017 Hobie Pro Angler 14 featuring the new Mirage Drive 180.

The hull itself has remained unchanged from last year’s model. Featuring a sit on top, self-draining design, the hull measures 4.17m from bow to stern. With a 0.97m beam, the kayak is one of the largest single seat hulls on the market, and in this case, size has its advantages. Stability is a key feature of the hull. Anglers can easily stand in the kayak as they fish, giving the Pro Angler 14 a huge advantage over its rivals. It size and weight combined with aggressive bow angles mean the kayak cuts through small waves, chop and boat swell exceptionally well. It keeps the angler free from spray in most conditions. 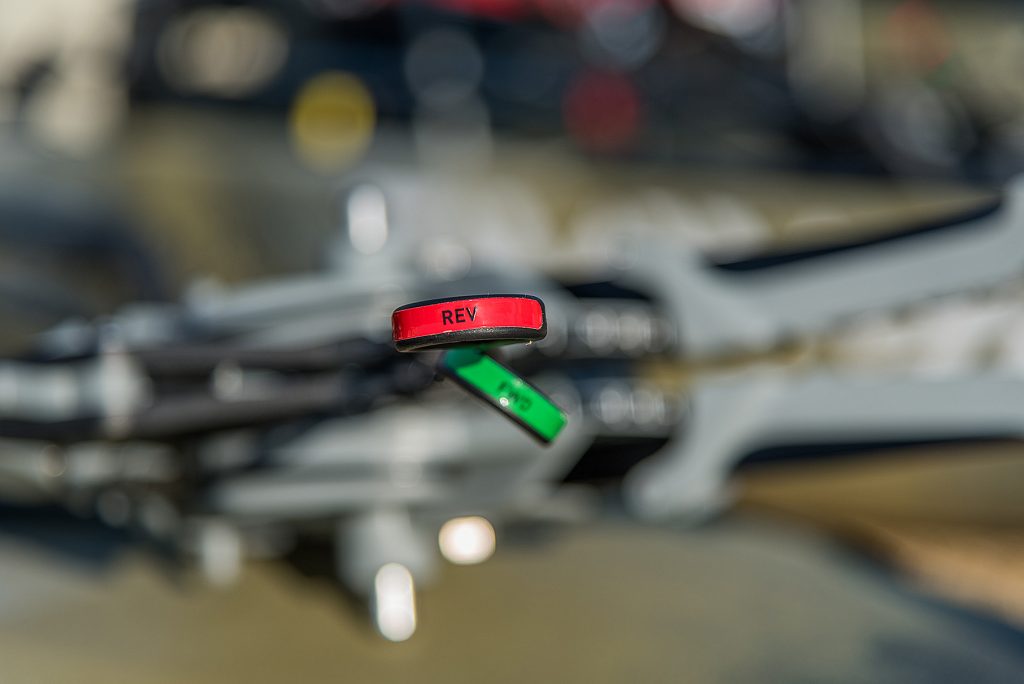 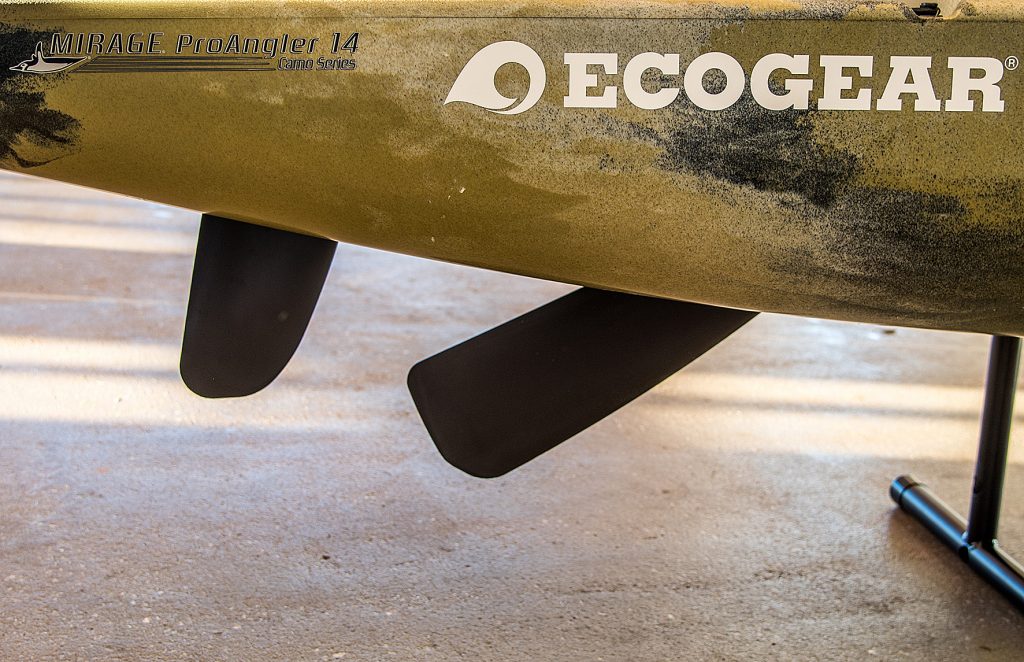 The retractable rudder is stowed with pull cords. The rudder is spring loaded and will simply fold back when it comes into contact with anything solid. This prevents damage and the drop down skeg can be deployed in tricky conditions, to help the kayak run straight.

The seating position and angler cockpit is large enough to accommodate any angler and store plenty of extra gear. 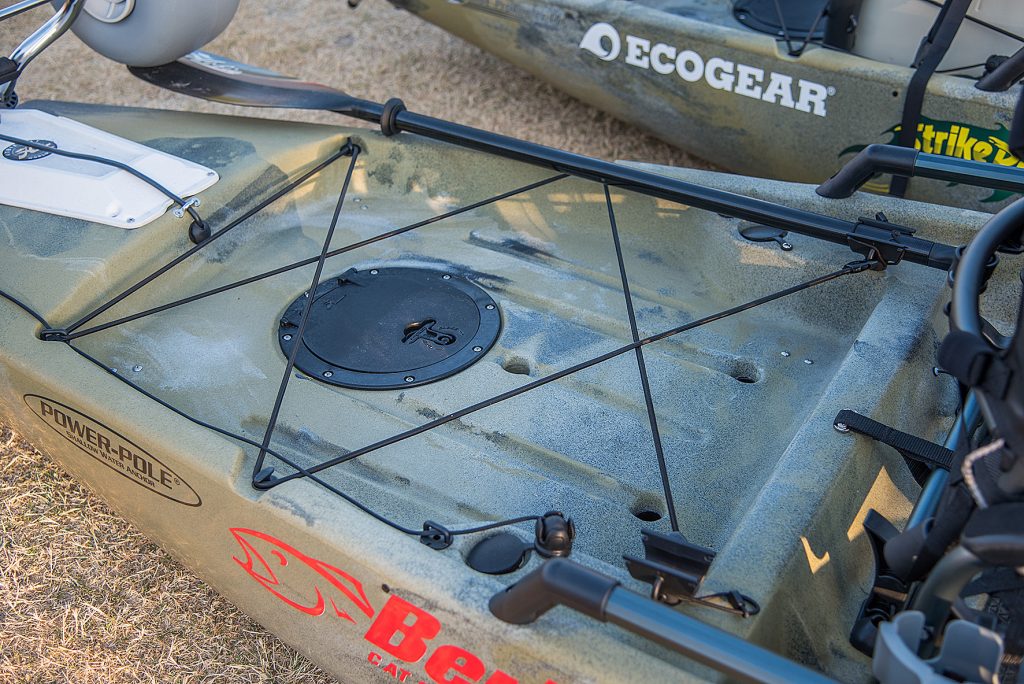 The large rear cargo area provides anglers with the perfect platform to hold their tournament live wells or the H Crate Storage System. A bungee cord system allows for any added cargo to be secured. 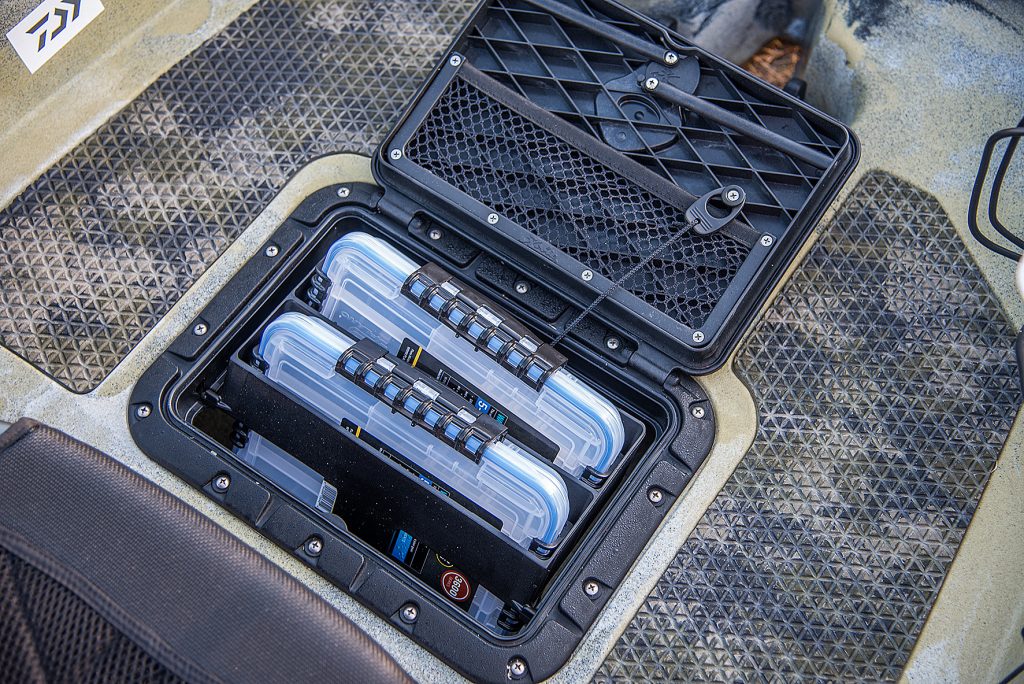 The rectangular hatch in front of the seating position opens to reveal a pivoting tackle management system that has two Plano tackle trays (included). These provide anglers with quick, easy access to their go to lures. 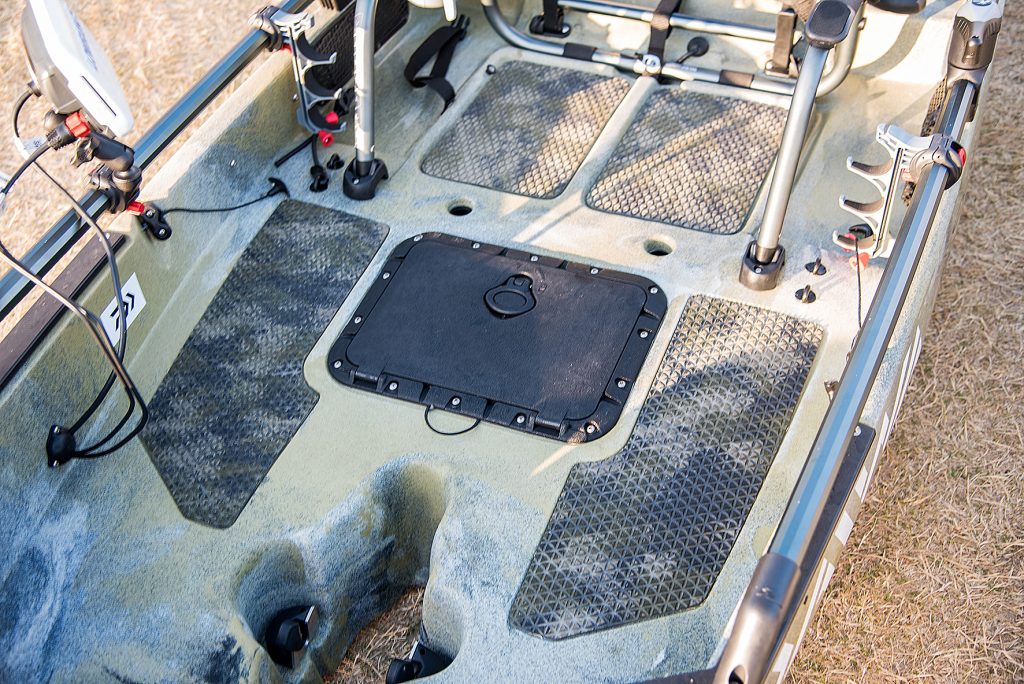 The Camo Series Pro Angler model features camo coloured, non-slip floor mats. These mats provide anglers with a safe place to position their feet when standing in the kayak. 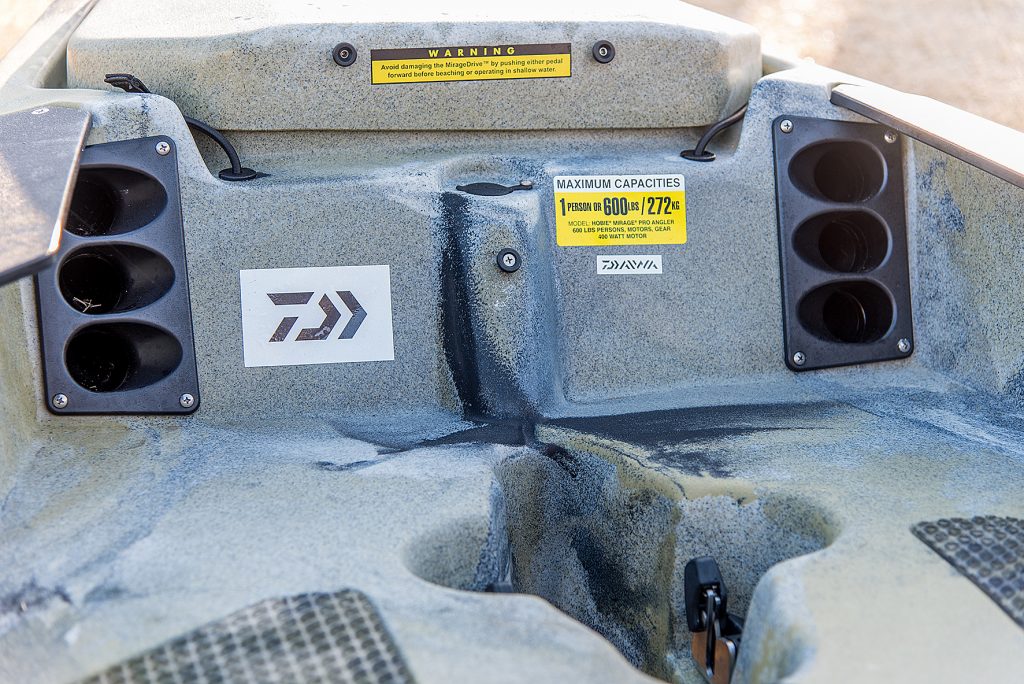 Six horizontal rod tubes allow anglers to store more than enough rods aboard the kayak. Two additional vertical rod holders are moulded into the hull behind the seat position. 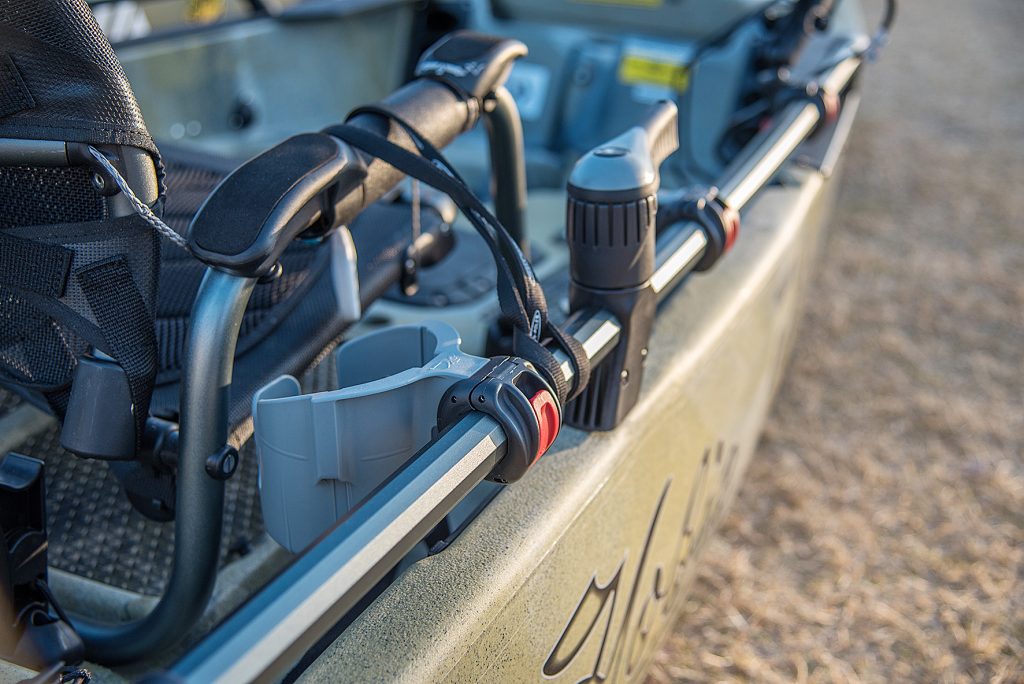 H-Rail is an extruded aluminium dodecagon rail mounting system that allows anglers to mount a plethora of accessories to their kayak, without the dramas associated with drilling into the hull. Available accessories include rod holders, tackle bins, cup holders and sounders. 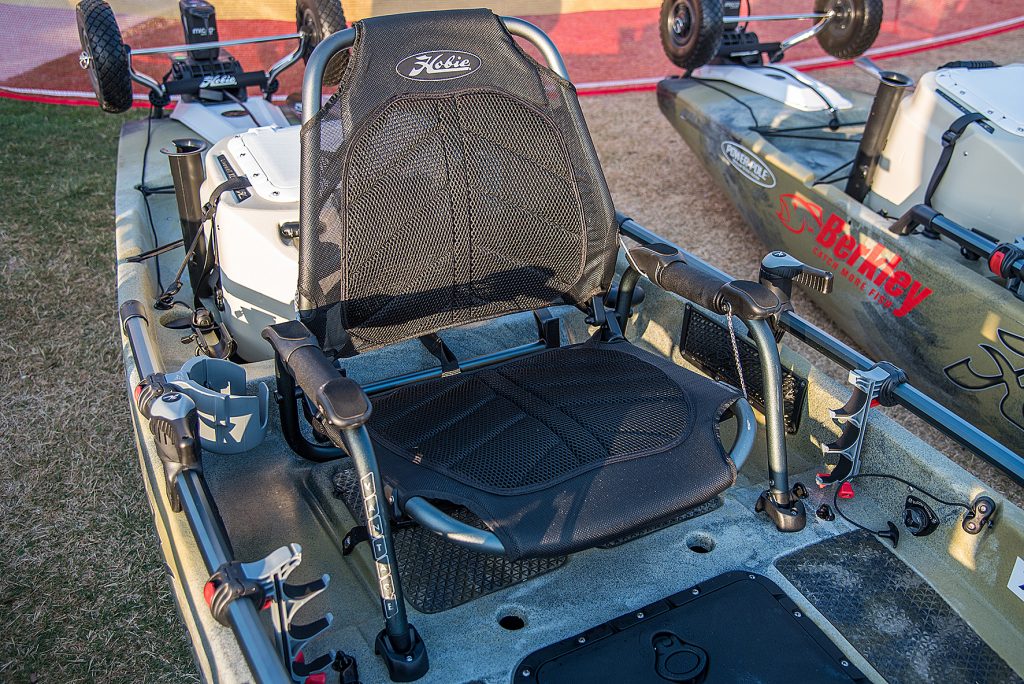 The Vantage seat features three-way adjustment (base angle, back angle and lumbar support). It’s the ultimate in kayak seat comfort. It also has two height adjustments, which allow anglers to lower the kayak’s centre of gravity in choppy conditions, or give the angler a higher perspective when sight casting. 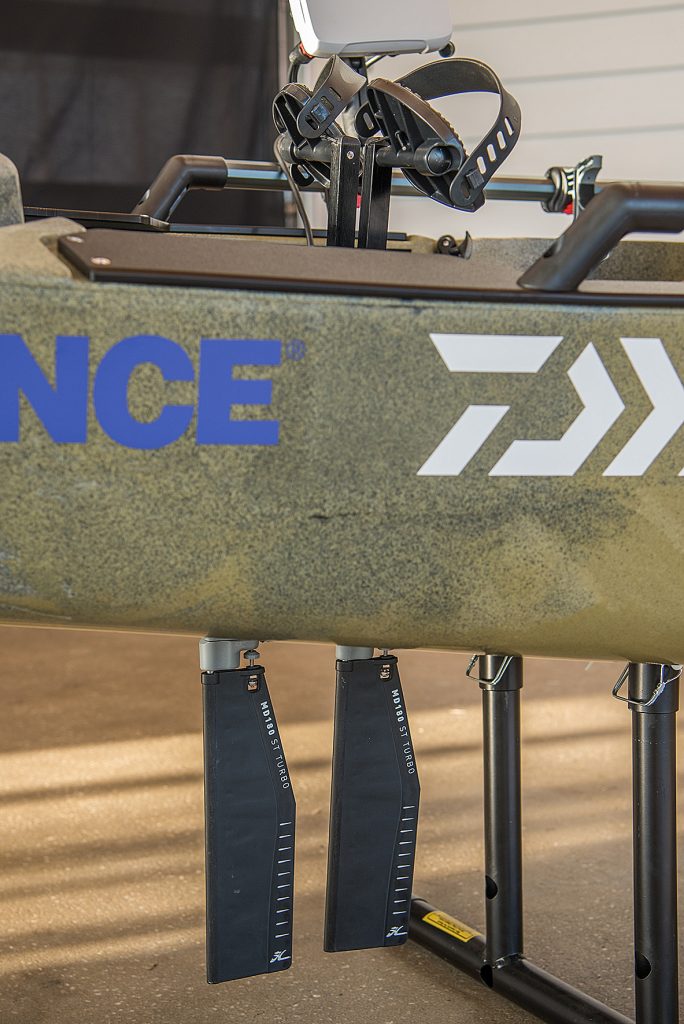 The major upgrade for 2017 – Hobie’s new Mirage Drive 180 allows anglers to pull one of two shift cables to pivot the fins 180°, instantly moving the drive into reverse and back again. 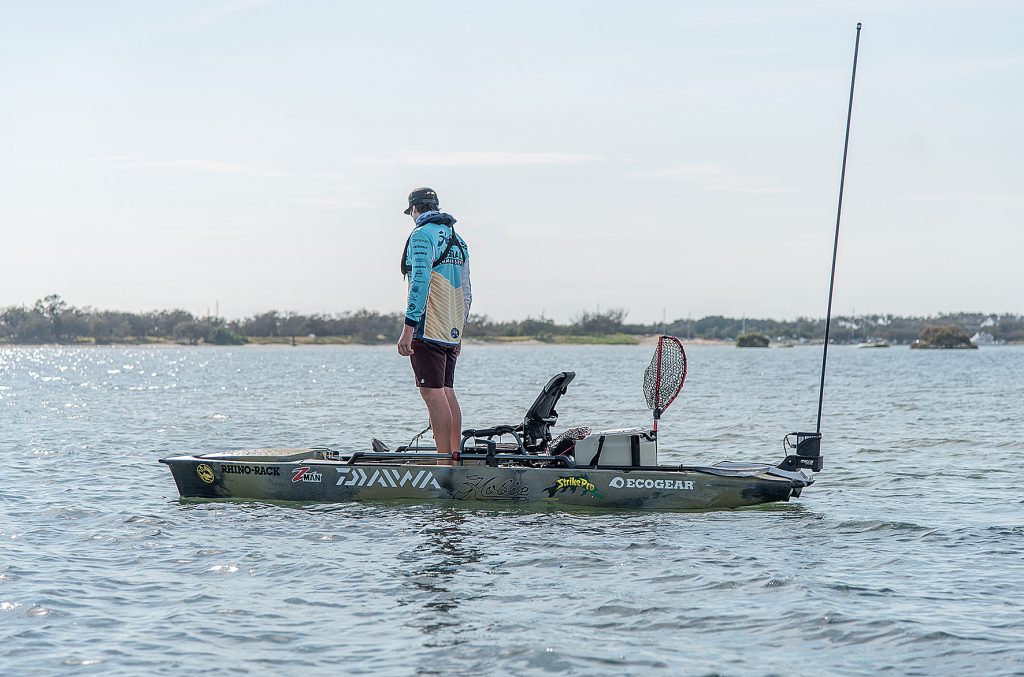 Stability is a key feature of the hull. Anglers can easily stand as they fish. This gives the Pro Angler 14 a huge advantage over its rivals. 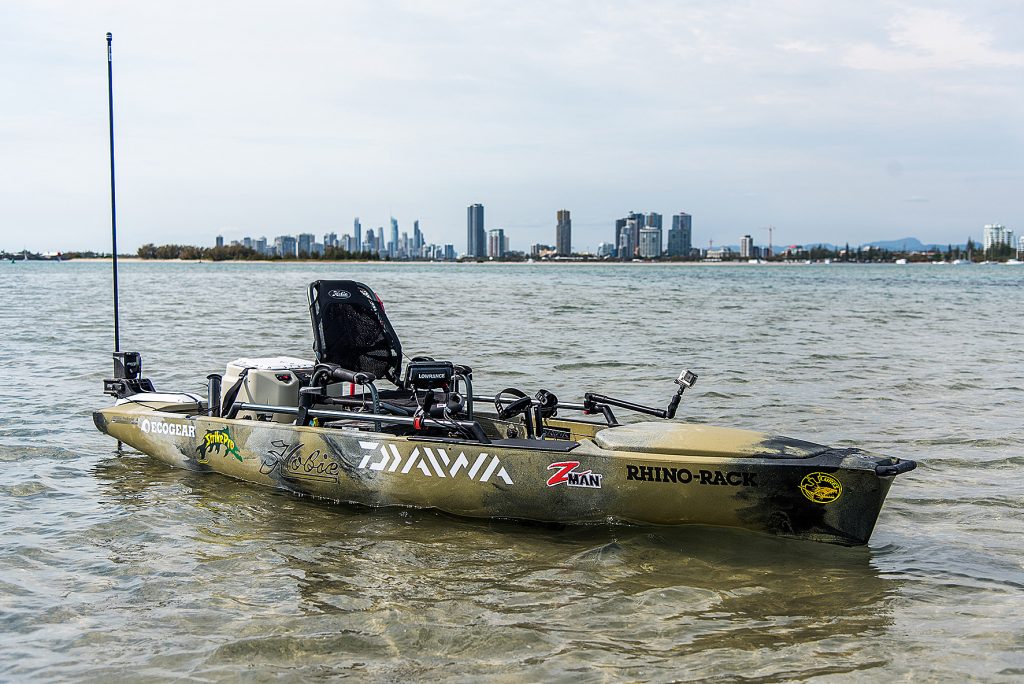 The major upgrade to the 2017 model is the addition of the Mirage Drive 180. The MD180 differs from past Mirage Drive units in its ability to move the kayak in reverse. For many years, this has been the thorn in Hobie’s side with more conventional pedal and propeller propulsion systems in rival yaks always having this ability, at reduced power. Anglers can pull the reverse shift cable on the MD180 to pivot the fins 180°, allowing the kayak to be propelled in reverse at full power. Simply pull the forward shift cable to return the fins to their original position and continue.

After spending three days testing the 2017 model in the Gold Coast Canals, I found this feature to be extremely useful. I could use the reverse feature to negate the effects of tide or winds that pushed me past the pontoon or pylon I wanted to cast at, which kept me in the zone longer. I also found that I could reverse when I was hooked-up to a fish. This allowed me to clear the fish of the structure before any potential bust offs. The new fin design produces more thrust so the angler can reach their spots faster.

The second major upgrade on the 2017 model is the new Camo series. Camo Series Pro Angler 14s feature the new camo colour – an olive kayak with gray and black mottling throughout, and camo coloured, non-slip pedal pads and floor matting. These combine to create a striking kayak, both on and off the water.

The other key feature that makes the Pro Angler a standout from its rivals is the Vantage Seat, with three-way adjustment and two seat height adjustments – Hobie have taken comfort to a new level. The Lowrance Ready system remains in the 2017 model and allows anglers to easily mount compatible transducers on a built-in mount with through hull wiring plugs provided.

This system can also accommodate Lowrance TotalScan Transducers, which solves the problem of anglers wanting to run side scan in their kayaks. The Hobie H-Rail system’s extruded aluminium dodecagon rail provides anglers with outstanding mounting options, without having to drill into the hull. The kayak also features a large front hatch with liner for even more storage options, six horizontal rod holders, dual steering control, replaceable mounting boards and side mesh pockets.

Tournament and recreational kayak anglers worldwide have made Hobie the market leader, due to their continued commitment to quality and innovation. The 2017 Hobie Pro Angler 14 delivers yet again, retaining all of the proven features that have made it such a popular kayak in the past. With the edition of the MD180, their domination of the market is set to continue for years to come.

by Corey Gallagher • Paddling the canals of the Patterson Lakes Complex in your kayak, you could believe you’re holidaying on the Gold Coast, until the cold chill of Melbourne winter brings you back to […]

Hotspot: Plan B on the Betka

by Corey Gallagher  • Several years ago, while holidaying in Mallacoota, I was faced with a dilemma. Our trip coincided with the week leading up to a Hobie Kayak BREAM Series event, which I was […]

Hotspot: Back to school in the yak

by Corey Gallagher • Many of us, myself included, who live in our larger coastal cities often travel far and wide to remote and exotic locations in search of that ultimate fishing spot, often ignoring […]