Big barramundi are on the top of many anglers’ bucket lists. Everyone wants to catch a metre long barra, but in the briny those big girls are hard to come by. Even live baiters can do it pretty tough at times.

When things are right, however, the fishing can be spectacular. While working rivers and creeks, I’ve had the best results during the last hour of an ebb tide. With a fair amount of current to contend with, I mostly used the reliable Zerek Live Cherabin, Zerek Hot Legs or Zerek Flat Shad. These lures are almost entirely snagless, and they have scored me some nice barra.

However, your best chance for a metre fish is in the dams. Not the world’s largest barra, but the author was pretty happy with this fish from the Kolan River. 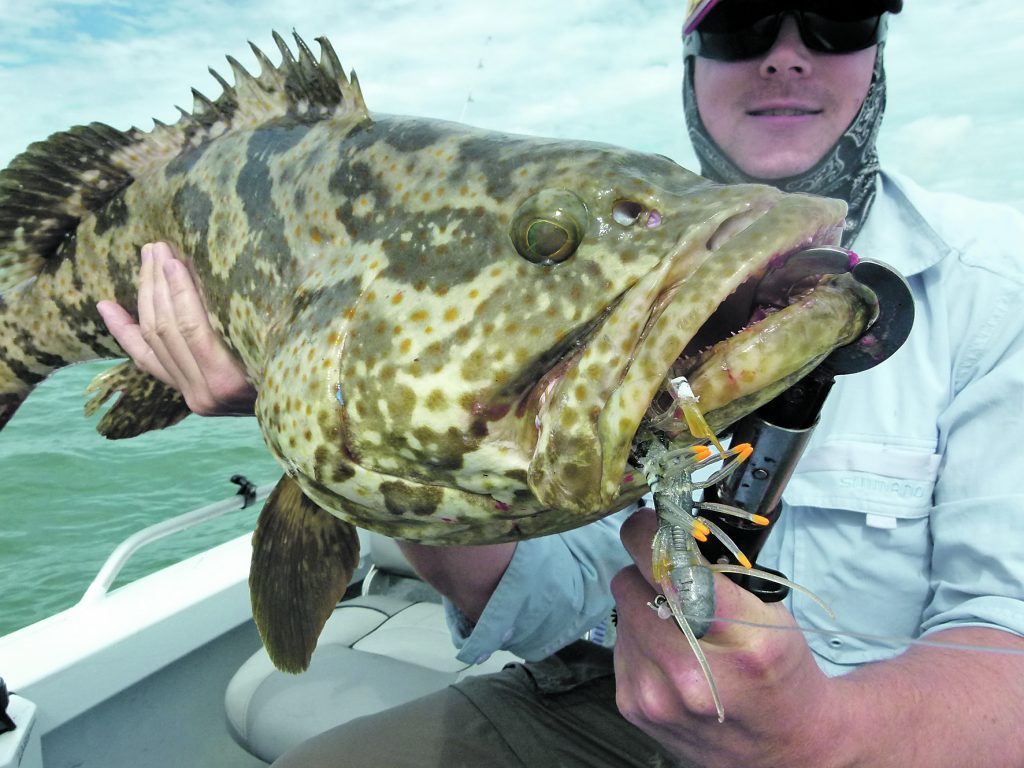 By-catches when barra fishing can include some pretty hefty cod, like the one held by angler Steve Shephard. 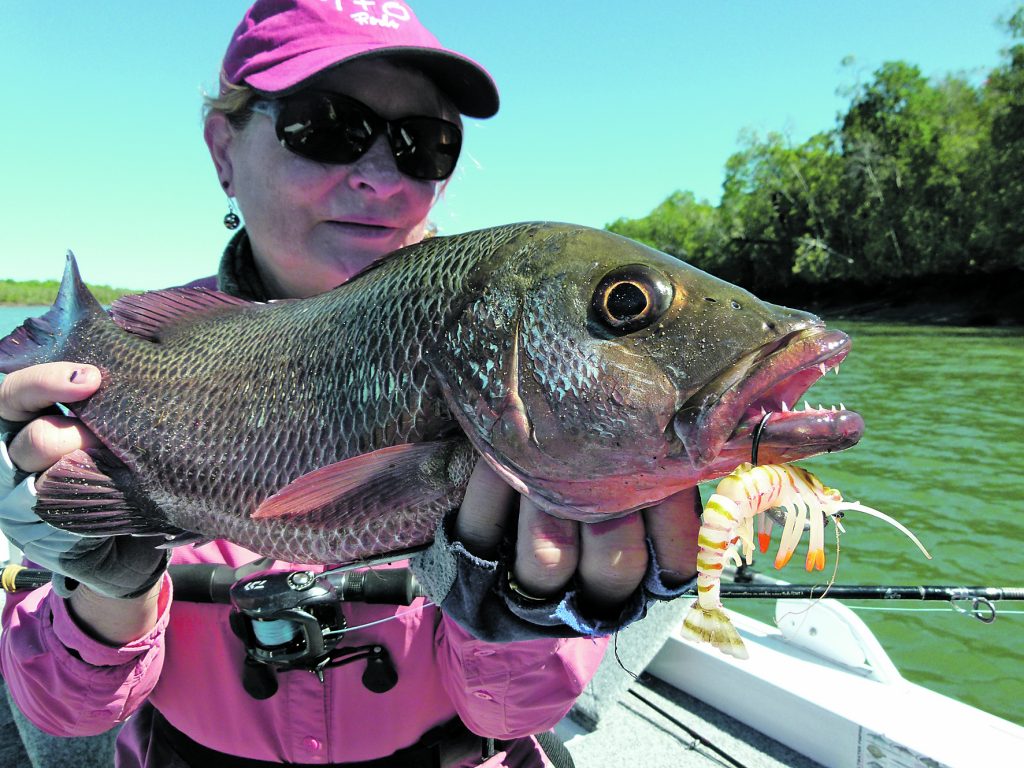 One of the delights of barra fishing in the saltwater is the bycatch. What’s wrong with casting for a barra and landing a mangrove jack instead? Having hooked this fish on the lily edge, the author gives it the butt to prevent it powering back into the plants. 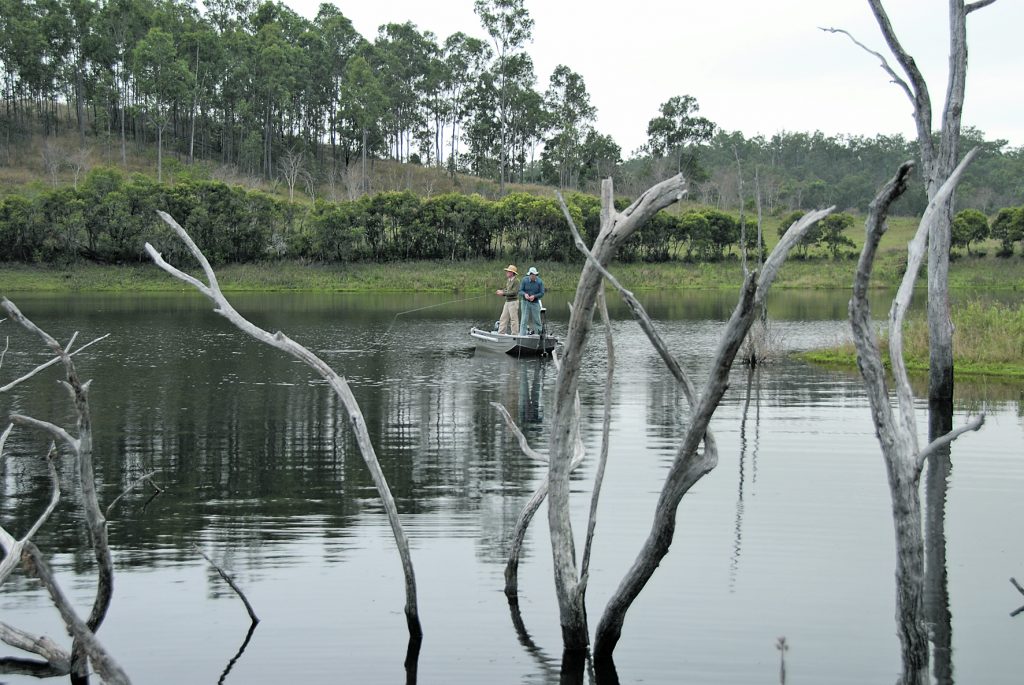 Fish move in close at prime feeding times. This small tinny is in just the right place. The Side Scan sounder is a great tool for barra anglers, and images like these certainly help build confidence when you’re fishing hard. 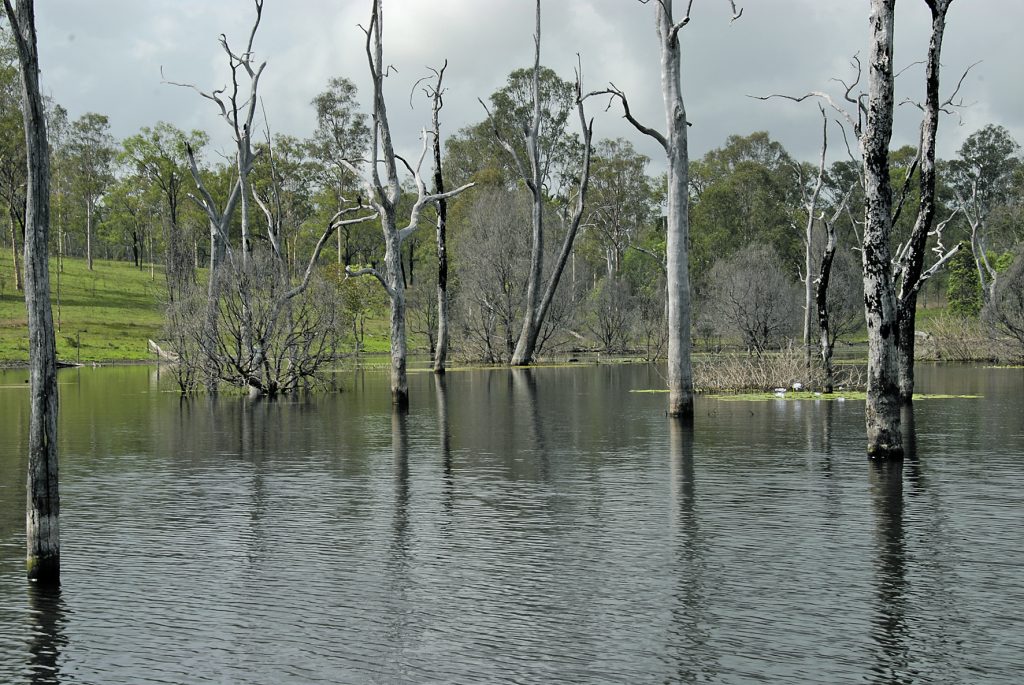 Prime barra habitat in Lake Monduran. The best part is that a lot of it is very close to the ramp these days.
The dams

From Tinaroo to Teemburra up north, and Awoonga to Monduran further south, good fish seem to be on the increase. This follows extensive restocking efforts to build up numbers after the mass exodus of fish over most spillways during the massive wet seasons a couple of years back.

True, you won’t always do well in impoundments, but at least you know the big bruisers are there. It just comes down to finding them. As long as you have a boat or kayak to get onto the water, and the right tackle for the task, there’s plenty of reason for optimism. And even if you don’t have the expertise to pull fish under the most difficult conditions, it’s always a treat just to be there.

Monduran Dam, so very close to the main population centres of the southeast, is an impoundment that I’m probably most familiar with. At a near full level and with weed beds galore, lily-fringed bays, shallow flats and prominent points lined with timber, it has an exciting diversity of barra habitat. The best part is that this impoundment is so large that scores of anglers can go about their business without being in each other’s way, or even seeing each other.

At this time of year many fish move from more far-flung arms of the dam to west towards the main basin and areas not far from the wall. They’re no doubt hoping for another flood to occur and cut them loose! Fishing Bird Bay, SDA Bay and other closer areas are the way to go at the moment. These areas are within 5km or so of the ramp, so people with smaller tinnies are just as likely to score a fish as those anglers setting out with a 200hp outboard.

Trolling the main basin can be as successful as any other method as summer draws on. A spell of settled weather will fire up these southernmost barra big time, while weather changes on a daily basis seem to promote a bit of lockjaw.

We made a trip to Lake Monduran recently, and I was very excited by what I saw while checking out some of our favourite flyfishing spots. Our preferred spots are areas less than 4m deep where we can use our fly gear not far from timber, but not right in it, or on a fairly open point near solid cover. The fish there are likely to be looking for an easy meal at dawn, on dusk, or after dark.

The 10wt fly rods we use are set up with large arbor reels kitted out with the same weight intermediate sink rate lines set up with a 2.8m, 30kg leader with a 20kg fluorocarbon bite-off section at the fly. A floating line of the same weight is always handy for fishing 6/0 Gartside Gurgler flies after dark for a bit of surface action when the fish are obviously boofing in the area. This doesn’t happen a lot but it’s too good to miss when it’s on.

If you don’t tie your own flies, tackle store Gold Bombers or Bush Pigs will fill the bill admirably, and while the 10wt rod is a bit of a beast to repeatedly cast, the power is necessary for big fish.

Our fly tackle simply doesn’t have the stopping power of powerful overhead or threadline tackle setups with 50lb braid connected to an 80lb leader, so we’re content to fish areas where fish can run a bit before being played out. Wide flats with small areas of skinny sticks are also good. Overall, the less snags around the place, the better.

Back to our Lake Monduran trip! We arrived at Lake Monduran Holiday Park’s camping area late in the afternoon on the fourth day of hot, northerly weather. We set up camp quickly, had a snack and launched the boat at 5:45pm. It was straight to Bird Bay for us, and at 6:40pm a 99cm barra ripped into Denise’s fly and simply took off on its tail. It seemed to be more airborne than in the water. Even with the 10wt tackle hard at work in the hands of an angler who really knows how to use it, this was still one mighty feisty fish. It gave us a hard time, trying to get into nearby timber and trying to wrap around the prop until I raised it out of the way.

Experience and strategic force prevailed in the end, and we returned to camp flushed with sweet success.

We were well primed for more of the same, but our next couple of sessions were much more difficult due to daily weather changes. Barra would swirl at our flies but not properly take them. A massive boil, a tweak on the fly (how a barra can do this eludes me) happened several times. We returned to the same bits of timber later on, and with a different fly on the leader, but still didn’t get a hook-up.

There’s a huge difference in fishing styles for saltwater and freshwater work. In the briny, barra seem to be a lot more tolerant of boat and angler activity. On lots of occasions I’ve moved into a snag under electric power to retrieve a fouled-up lure, moved back to the previous area under electric power and latched onto a fish next cast. Obviously, the fish move a short distance away and then regroup around the snag as the boat moves off!

There is no way that would happen in an impoundment. Once the boat is close, there’s usually a massive bow wave or giant boil of water, and it’s game over for that spot. You need to approach a chosen fishing area as quietly as possible. Either use the electric motor to sneak in, or shut it down and drift to a chosen spot if you can. I then tie the boat to a snag or tree to keep it still while I fish the area. Yes, the anchor lock on an electric will hold the boat steady but it still generates quite a lot of noise, which is not a good thing. Tying up makes more sense, but it’s wise to have a quick-release loop handy to free the boat if you need to chase a really big fish.

Side scan systems have opened up barra fishing in a way we never thought possible a decade ago. They don’t worry the fish at all, judging by the results I’ve achieved with the sounder marking fish around us. It really adds so much more confidence when you’re casting to a fish that’s quite visible on the sounder.

The only problem is that they still might not bite. That’s barra all over! That’s why you need to put in the time and persevere. To score a big barra there’s a lot of persistence required, and faith in your technique. And when a big fish finally scoffs your offering, it’s really important to stay cool and take control as early as possible in the fight. Good luck!

Do nature a favour, catch a cichlid

by Wayne Kampe • Cichlid is a strange word. Let’s try tilapia. Now we’re talking about a pest fish that seems to be in every South East Queensland waterway and many others north and south […]

Scratching that barra itch all year round

by Roderick Walmsley • A few years ago, if someone asked if you had heard of the Fitzroy River, you would be forgiven for assuming that they were talking about the river located up in […]