Catching luderick with weed flies is a relatively new approach that is more often used with traditional techniques. In many instances it has been proven to be more productive than using weed itself. It’s far less hassle than finding weed, wrapping it onto your hook and tying half hitches.

The key is to find a well-tied fly that closely resembles the weed your target fish are feeding on (matching the hatch is very important) and ensuring that your drift is perfect. Simply use the same principles as indicator nymphing in trout water. I call this technique ‘indicator weeding’ and boy, does it work!

For the Far South Coast saltwater fly angler, there are very few species you can fish for in this manner. Targeting luderick is like polarising a trout in a high country river then presenting a well-drifted nymph to it. There’s white water, strong currents, interesting drifts, gusty swirling wind and as this fish like very shallow water, good stalking skills and polarized sunglasses are paramount to success. 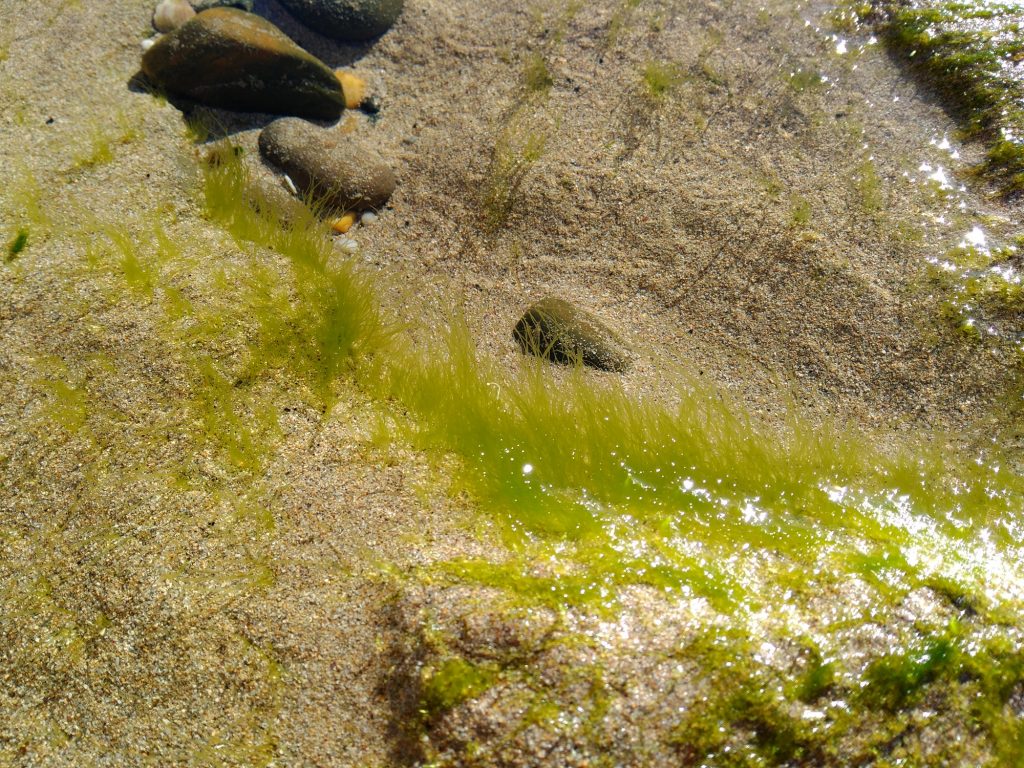 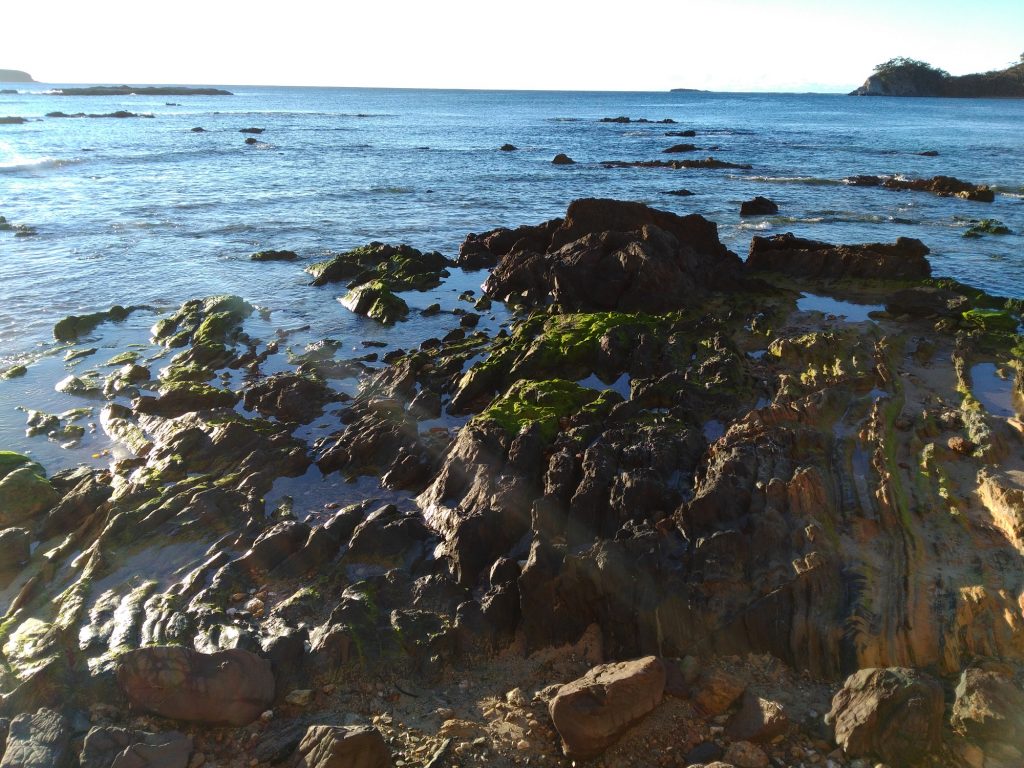 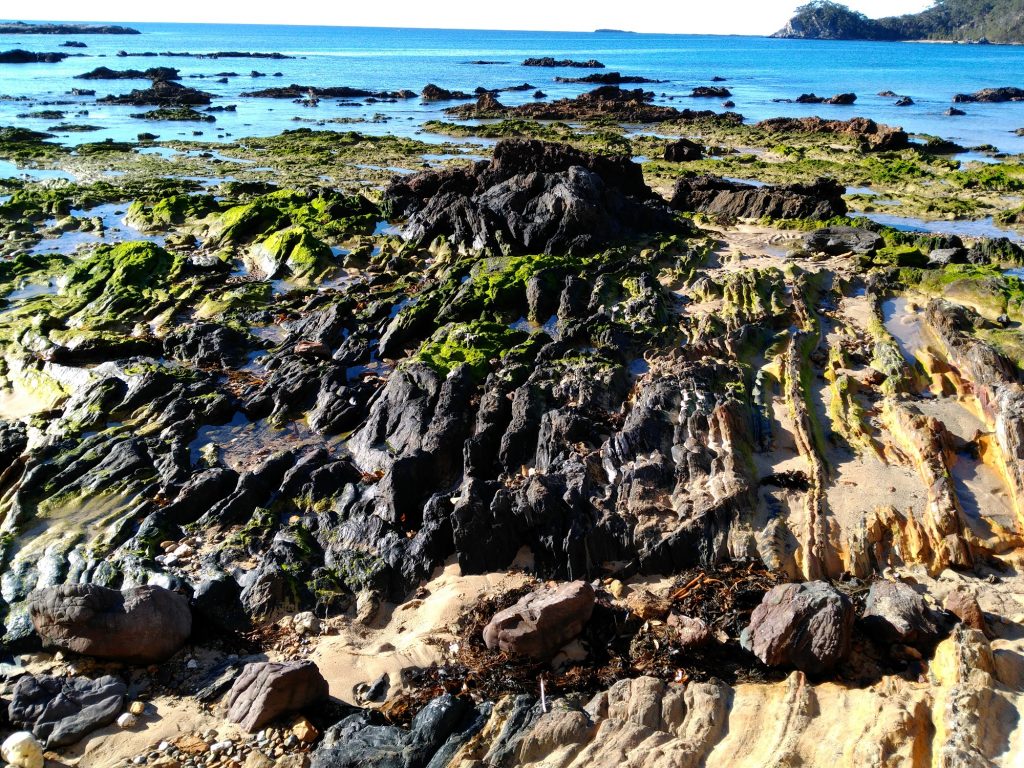 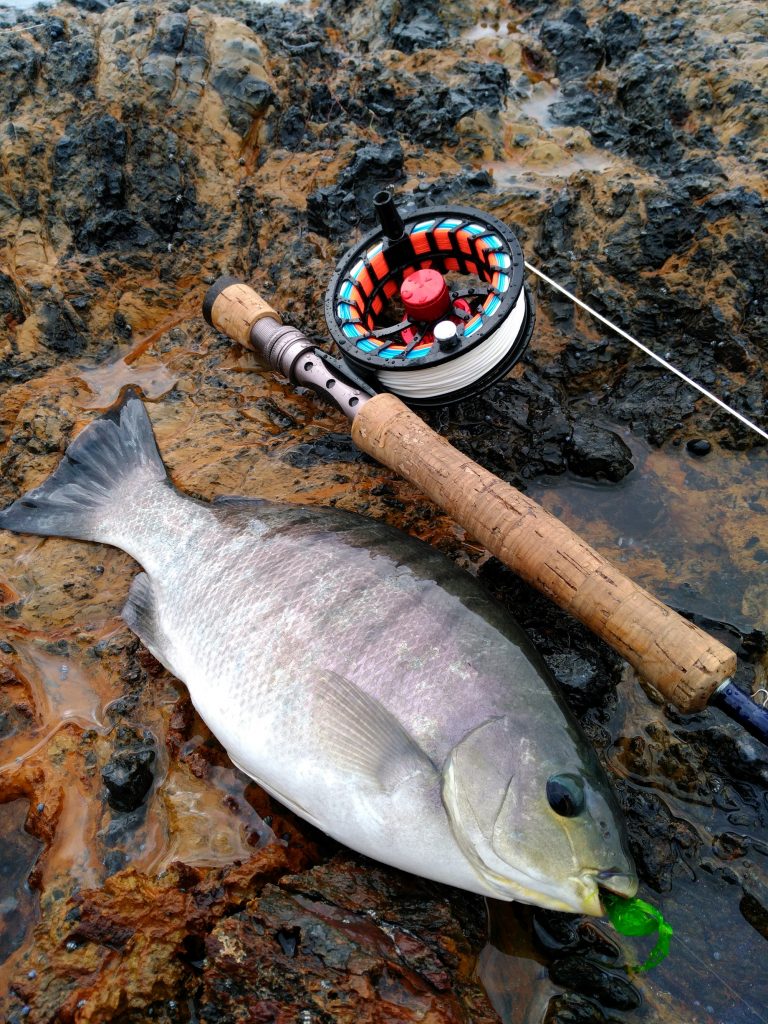 Another luderick, taken on a 7wt outfit. 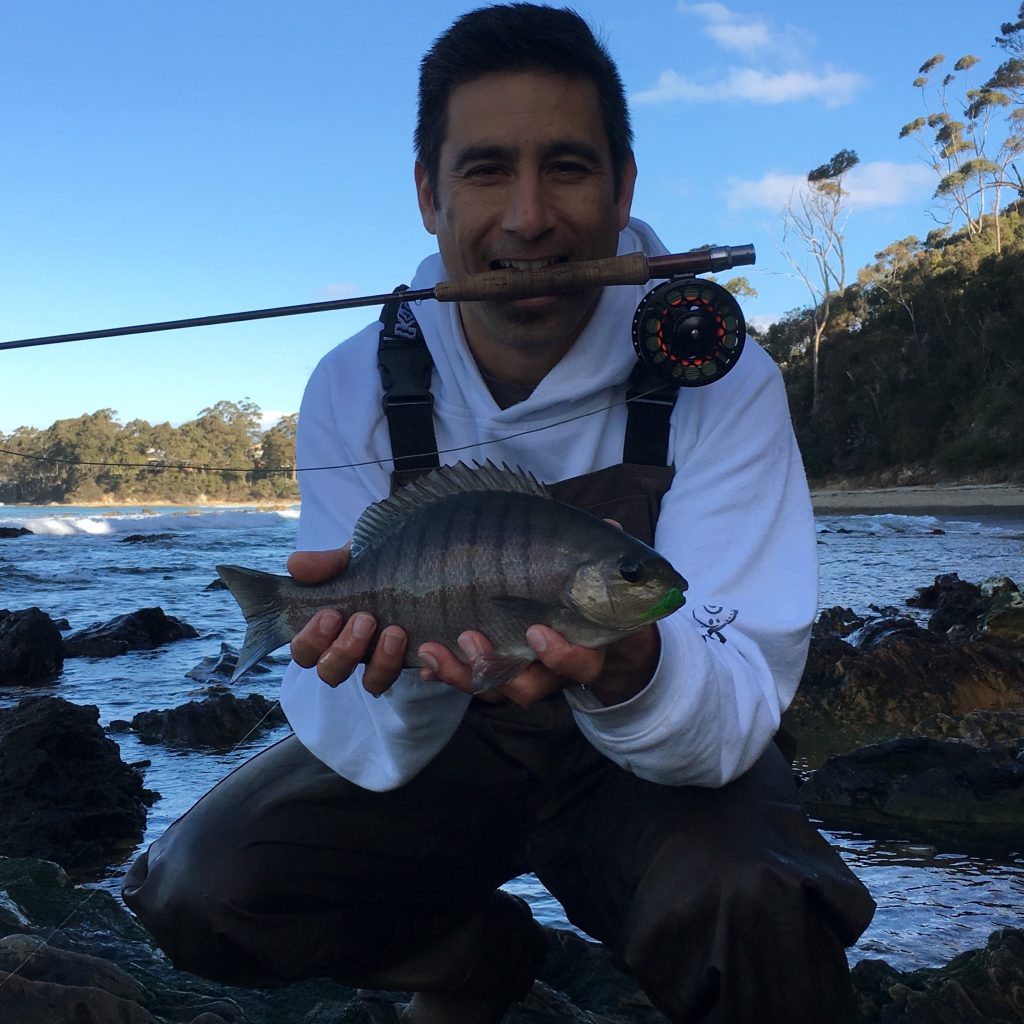 Here’s a typical sized luderick taken on a 5wt outfit.

When hooked, they won’t go aerial like a rainbow trout or Australian salmon. Pound for pound, on appropriate gear, luderick are right up there in regards to fighting capabilities. They are supremely adapted to skinny, turbulent water, and remind me of brown trout in that they fight hard and deep with some reel-screaming runs – take a net!

A few summers ago, Evan Jardine, master fly tier and owner of Createafly, stood with me knee deep on the Far South Coast of NSW. We searched for the ever-popular luderick (Girella tricuspidata). I was walking along a beach at high tide when I noticed a flash of silver and a tailing fish amongst the tide covered rocks in water no deeper than 2ft. Closer observation revealed small schools of well-conditioned fish from 25-50cm feeding on the green algae that coats the rocks.

A flash of silver beside a submerged rock revealed our quarry. The fish was sitting right at the head of the rock, and out of the current. With an eddy line on its right flank and a standing wave behind the rock, the water dropped from knee deep to well over head height – this was going to be an interesting presentation.

Two false casts and my 5wt delivered the fly upstream of the fish and right on the drift line. The fly sank and stopped at the green wool indicator, moving along with the current. There was another flash of silver as the fish changed position to accept the fly. I raised the rod and felt solid weight at the end of the 2kg tippet. The fish smoked off with the current into the deeper water behind the rock.

The drag screamed as the fish sprinted into a deep channel. I turned its head before it gained the safety of the turbulent white wash. I guided it back into the deep pool behind the rock. After 10 minutes, I’d been run over numerous rocks and turned the fish’s head three more times. I slid my hand under the silver belly, took some happy snaps and iki’d the fish. Its destiny lay with my dinner table.

On the low tide, these rocks are 50m away from the ocean and dry as a bone. The fish school up in deeper water on the ebb tide, waiting for their chance to move in and feed on the recently submerged rocks during the flood tide. This gives the fly angler a few hours to target these shallow water bruisers as the tide covers them again.

I use a Redington CT 5wt rod, matched to a Cortland Clear Creek WF5F line spooled onto a size 5 Snowbee Spectre reel. Make sure your reel can handle saltwater and has a smooth drag to protect those light tippets and handle those sizzling runs. I run a 12ft tapered leader and a 2kg fluorocarbon tippet. Depending on the terrain, this is probably as light as you want to go, as anything over 40cm will smoke you in the current and rocks.

A Czech nymphing setup would be even better. At the very least, a longer rod would certainly be beneficial given the number of sharp rocks and oysters. Using a Tenkara outfit would also be a lot of fun and the absence of a reel would be beneficial in the salt water environment. However, you’d get done in regularly by the bigger versions.

Given the strength of the fish and the gnarly terrain, you’ll definitely lose fewer flies with a 7wt, but that’s part of the fun in my opinion. Line weight isn’t going to matter if you hook a black drummer – you’ll get reefed for sure!

I use the weed flies from Createafly, which have been a very long time in the research and development stages, getting them absolutely perfect. Evan uses a material that almost seamlessly matches the green weed these fish are feeding on – chuck a mask on and have a look at them underwater. He also has other materials that match the green and brown cabbage (Ulva species) commonly used for bait on ocean platforms.

I use the New Zealand wool indicator system, which in purist fashion, carries some freshwater tradition across to indicator weeding. It works very well in this scenario. Alternatively, you could grease your leader and watch for movement, although this is very difficult in even a slight swell. There is no need for split shot in shallow country and a bit of saliva applied to the fly will see it floating in the water column at whatever depth you set your indicator.

There are instances where I prefer using a lightly weighted fly. I also love the completely natural drift I get from an unweighted fly and they catch more fish than the weighted varieties. Luderick will willingly rise to an unweighted fly that is just wafting around. With the shallow water and wave action, there can be a lot of water moving around. Just like a freshwater stream, you have to manage your drift properly to ensure the fly is well presented and not dragging or luderick will refuse it, just like a trout.

To be perfectly clear, we’re not talking deep water channels and deep drifts here, though weighted flies will definitely work in those situations, you just need to cast further up current to ensure your fly is at the appropriate depth as it drifts past the school. Luderick are omnivorous, but the majority of their feeding time is spent over spots containing eel grass, and weed on rocks.

My target areas are typified by very shallow water with a sandy bottom, interspersed with plenty of rocks. You’ll be pleasantly surprised to see how shallow this water can be, with fish often actively feeding in ankle deep water. They give away their presence with side flashes and tails and backs sticking out of the water like bream mooching around a shallow mud flat.

When searching for an area, look for spots that have channels leading into deeper reefy areas. This is where the fish congregate on low tide – these areas are always more productive and make for exciting fishing when a hooked luderick makes a break for the safety of the channel, sometimes resulting in a bust-off. It’s definitely helpful to walk these areas at low tide and look for algae-covered rocks. This is what luderick (and black drummer) will be feeding on.

Make a mental note of these locations and plan your approach so you can stalk them on the high tide without spooking the fish. Another terrific option when looking for target areas is to don a wetsuit and snorkelling gear. Have a look around these shallow areas to find out exactly where the fish are feeding, as they definitely favour some rocky areas over others, even along the same section of beach or rocks.

This sort of terrain is highly uneven and slippery by nature. On the Far South Coast, the sharp rocks will destroy breathable waders. Use PVC chest waders, or wet wade in summer. Be aware of large breaking waves and holes, and watch your back cast – some of these areas are on popular beaches and a decent back cast may put your weed fly into a tourist’s eye! Stingrays often abound in these shallow margins, so pay careful attention to where you’re walking – PVC waders will not stop a barb in the leg.

Luderick are a fantastic table fish. If you plan on keeping your catch, iki and bleed the fish immediately. This will greatly improve the quality of the flesh. Store the fish in a rock pool and out of reach from sea eagles, crabs, dogs, moray eels, gulls and pelicans. Never keep fish on your body as you may get harassed by wobbegongs that will enter very shallow water for a feed, these guys can grow to large sizes and can be very aggressive!

There are various recipes around, and a lemon butter luderick fillet fried in a shallow pan is pretty hard to beat.

Overall, indicator weeding is a terrific sport and a heck of a lot of fun. It may land you a quality feed of luderick. For the purist, it mirrors the traditional form of freshwater indicator nymphing. The sight fishing and stream craft skills used in our high country areas transition well into this saltwater pursuit.

Indicator weeding for luderick also provides fly anglers with a finesse winter hobby while the trout are busy making babies through the closed season. Next time you’re headed to the coast, be sure to sneak the fly gear in, visit the local tackle shop for some weed flies and give it a crack!

Tech Tricks: How to process your luderick catch

by Gordon Macdonald • Whether you call them luderick or blackfish, there is no denying that these stripy, bronzed estuary fish are very underrated. Whether you target fish for sport or table fare, the luderick […]

by Rhys Creed • The October long weekend in Southern NSW means trout. The season re-opens and anglers can head back to the pristine waters to spin, cast or wave a fly. This is by […]