One of the more interesting challenges facing the budding fly angler is simply finding fish to catch. It’s easy to buy the tackle and great fun learning to cast a fly with both delicacy and distance, but that feeling of a fish on the leader is harder to come by.

Trout in the high country and bass in some of our dams and waterways – even cod in high country streams – are good value, but when we decide to move up to larger fish in the salt water things become more difficult. A boat suddenly becomes a huge asset. Fortunately, it seems that the further north you go, the better the fishing becomes: boat or no boat.

Cape York, the fishing paradise we all aspire to visit some day, has to be among the best of the best for the fly angler. Access is reasonable via road so long as there’s no tearing hurry to get to a destination; the Development Road varies in its quality from shire to shire and, yes, a boat on a trailer strong enough to handle the trip will be an asset beyond calculation.

We don’t all have the sort of vehicle and boat trailer in the backyard to make this trip, but with modern air travel it’s so easy to pack some gear, put the rods into their tubes and arrive at Weipa Airport with a big grin on your face. With a hire car arranged, there are just so many great shore fishing areas at your disposal with Weipa as a base.

I’ve seen barra fly-caught from the rocks behind the Weipa Caravan Park on the eastern side at low tide. Fish such as queenies, tarpon, giant herring, golden trevally and others are so prolific in driving distance of Weipa – given the prolific beach areas with shallow flats and gently sloping full tide edges – that the fly angler can be spoiled for choice as to what the next target might be.

The much sought-after barra and mangrove jack are there as well. Their capture usually requires the presence of rocks or other cover they can call home. 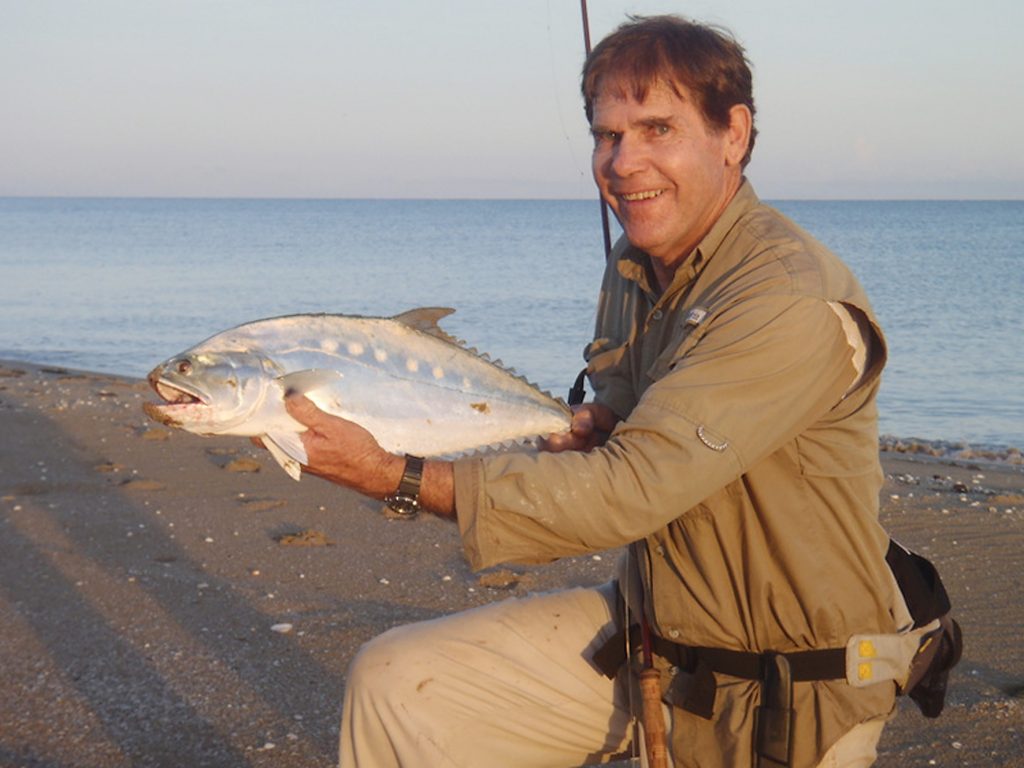 The author with a queenfish taken at dawn. 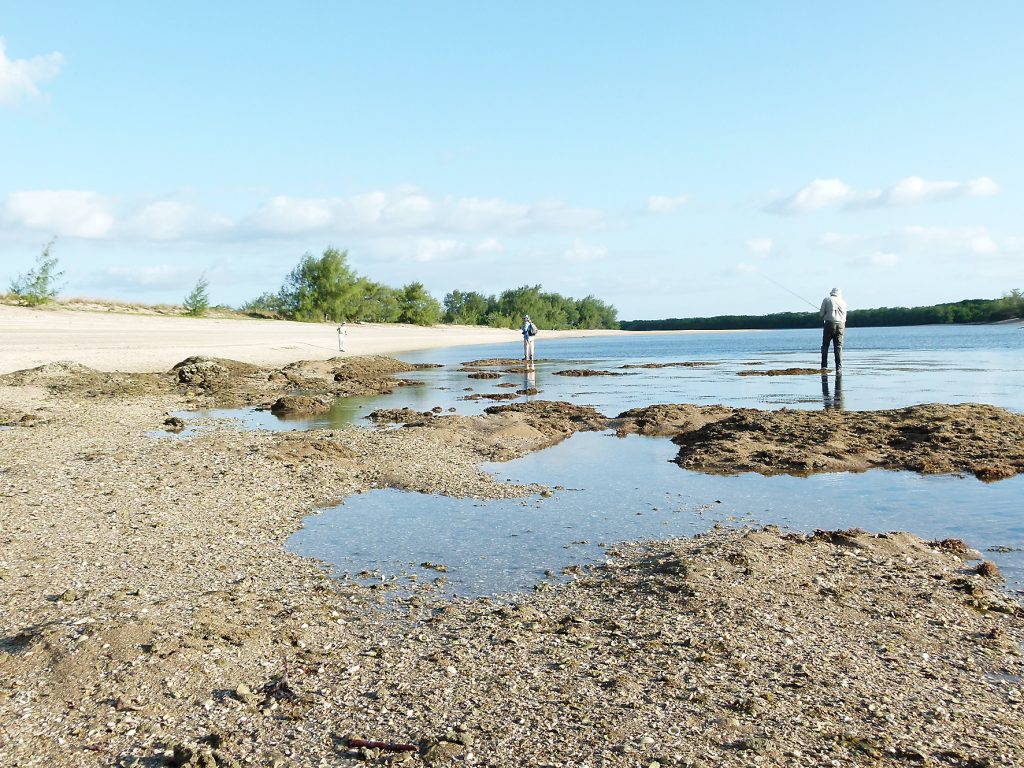 Rocks mean barra and jacks, and upgrading the tippet to 10kg. 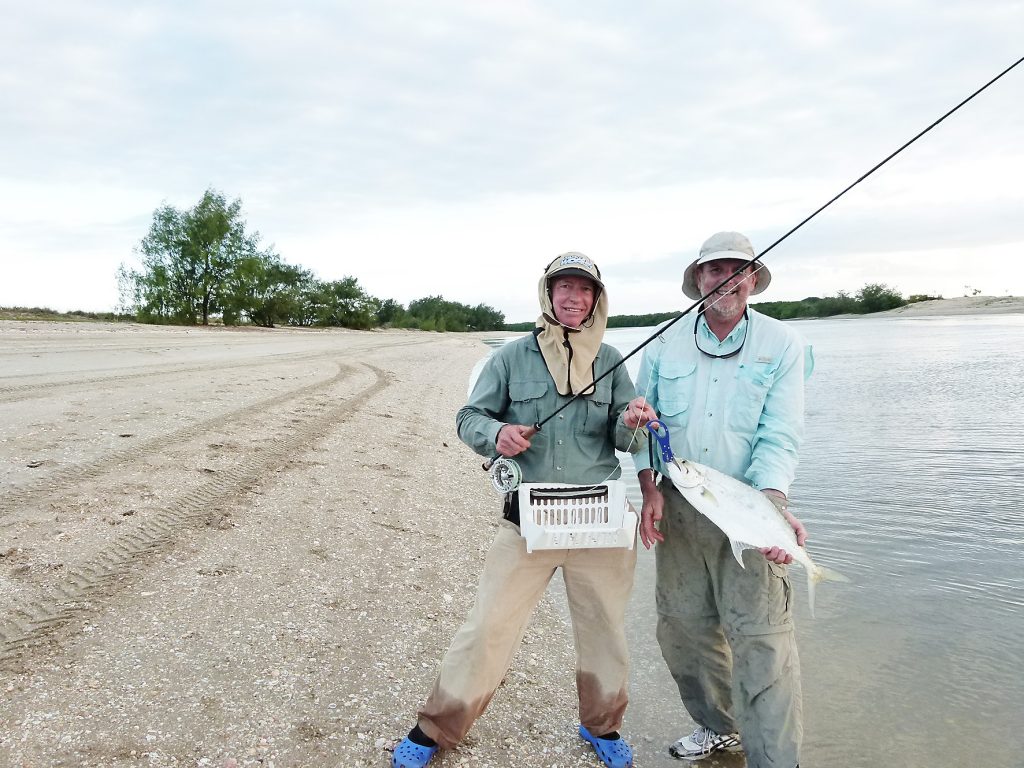 Who wouldn’t be happy? That’s a very good light tackle queenie off the beach. 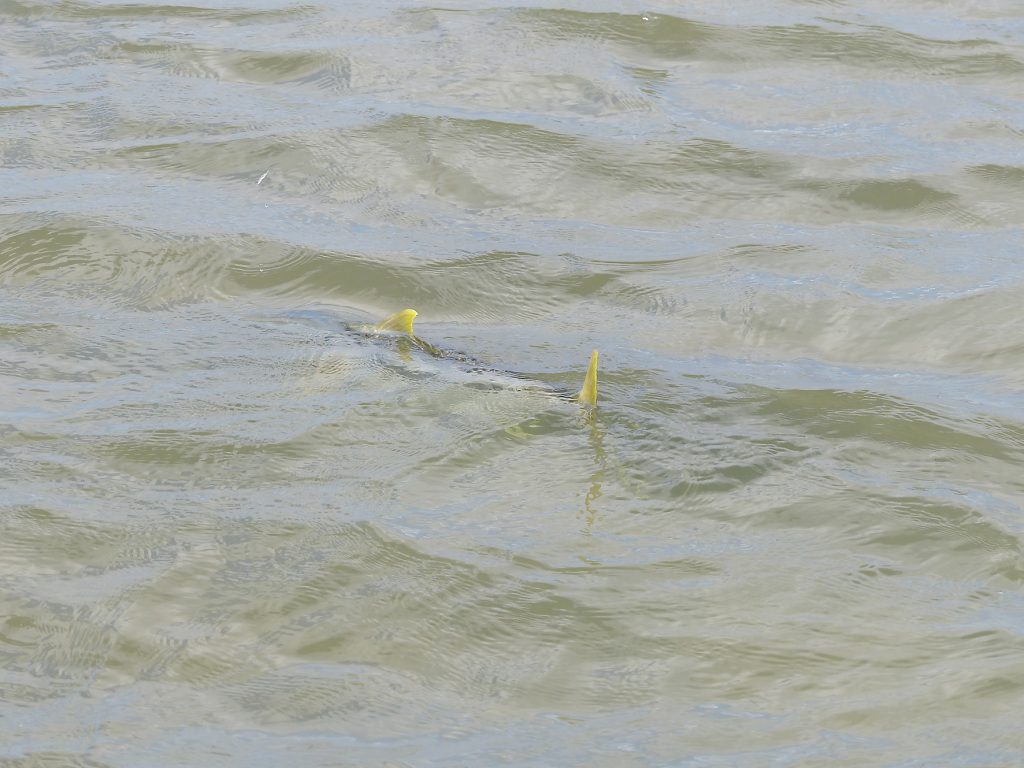 A decent golden trevally working the shallows. These are a tremendous fish on 8wt fly tackle. 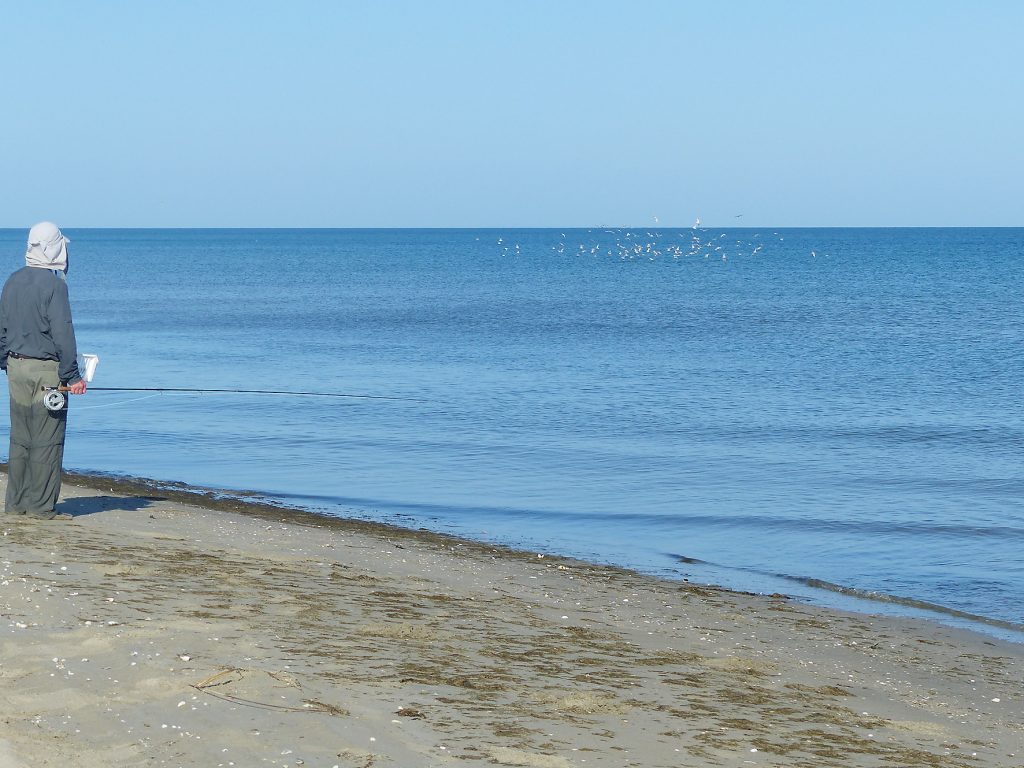 Sights like this are common on Cape beaches. A bit closer in and those fish will have a fly among them for sure. 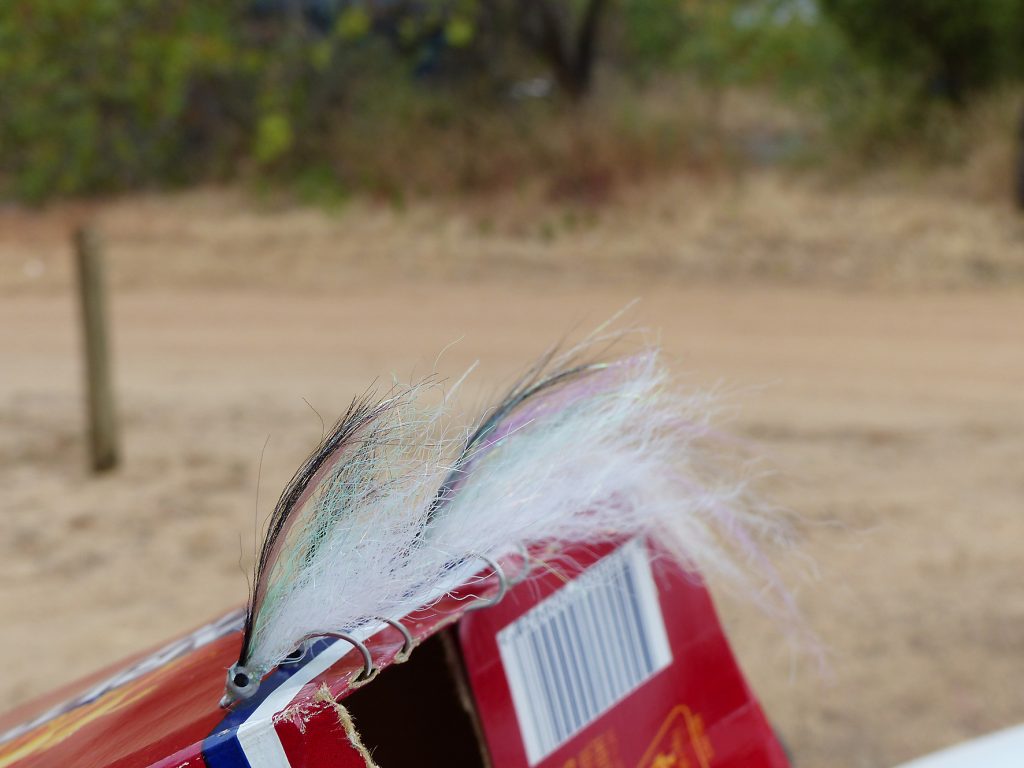 Flies on the run – these were made while at the Cape. Don’t forget the Solarez kit for the flies. 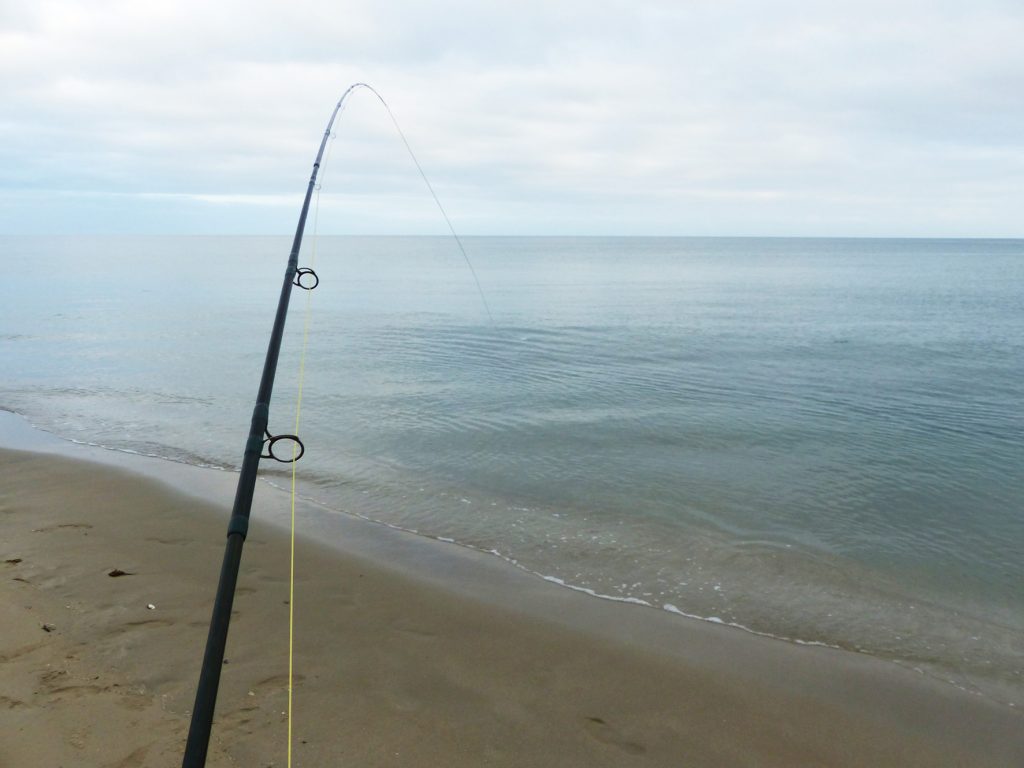 What it’s all about – a bent rod and some line coming off the reel. 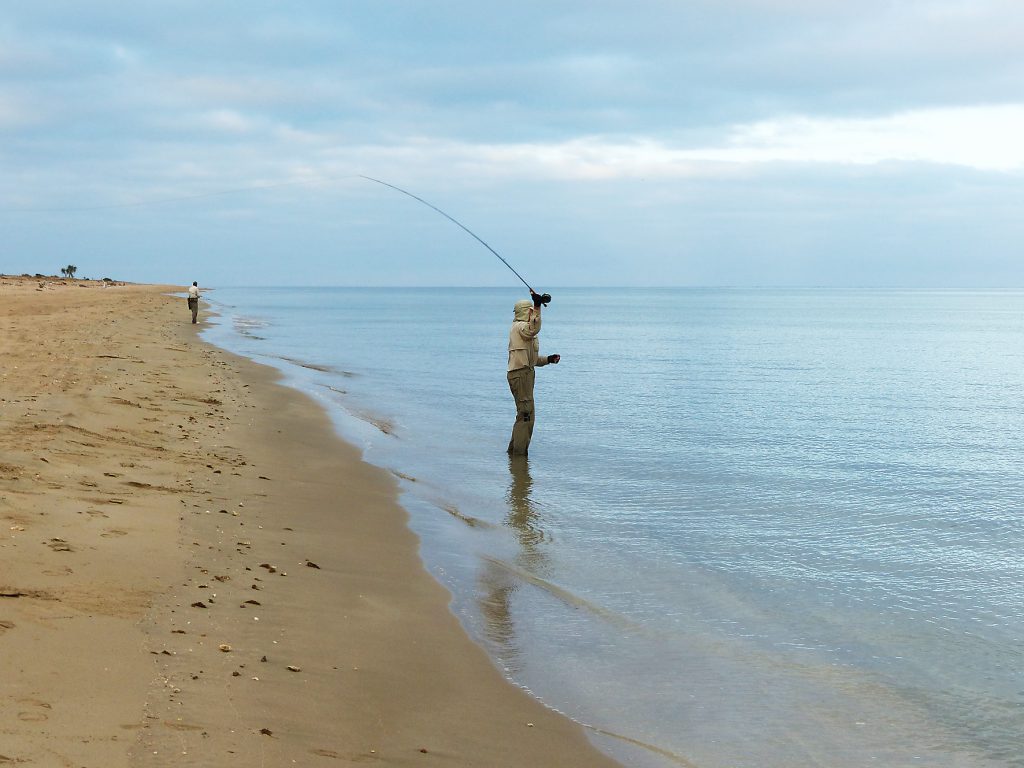 Keeping in close and moving along with each cast is smart. 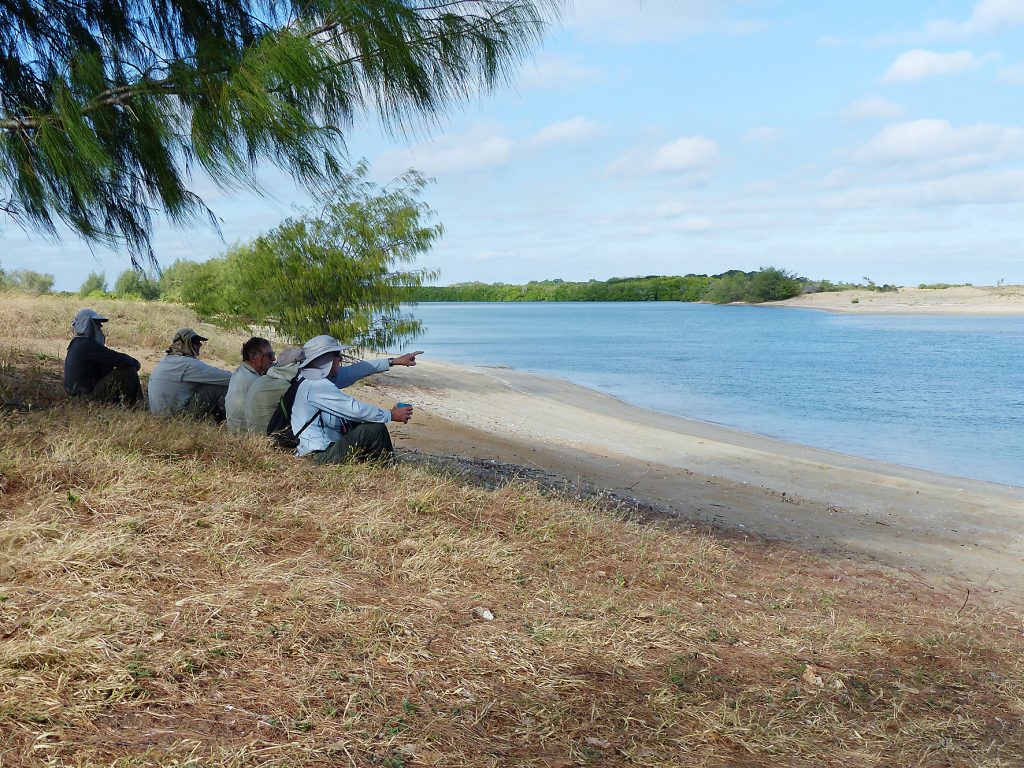 Time for a break at a Cape creek mouth and a bit of croc spotting. 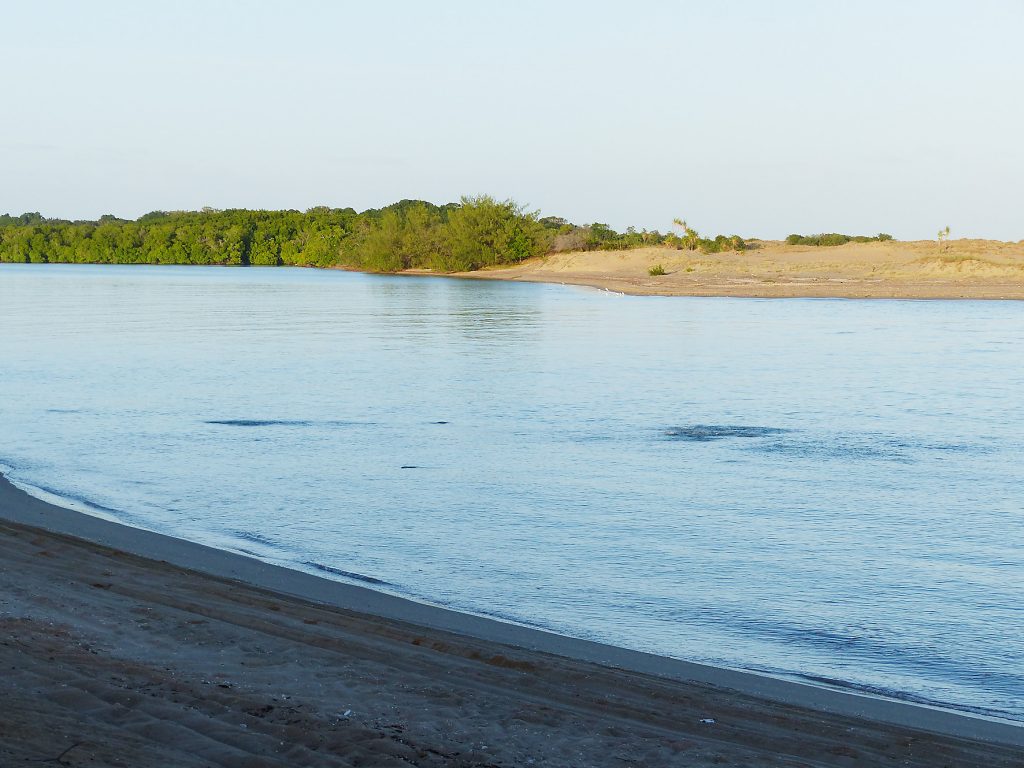 What the flyfisher looks for: surface action close to the shore. 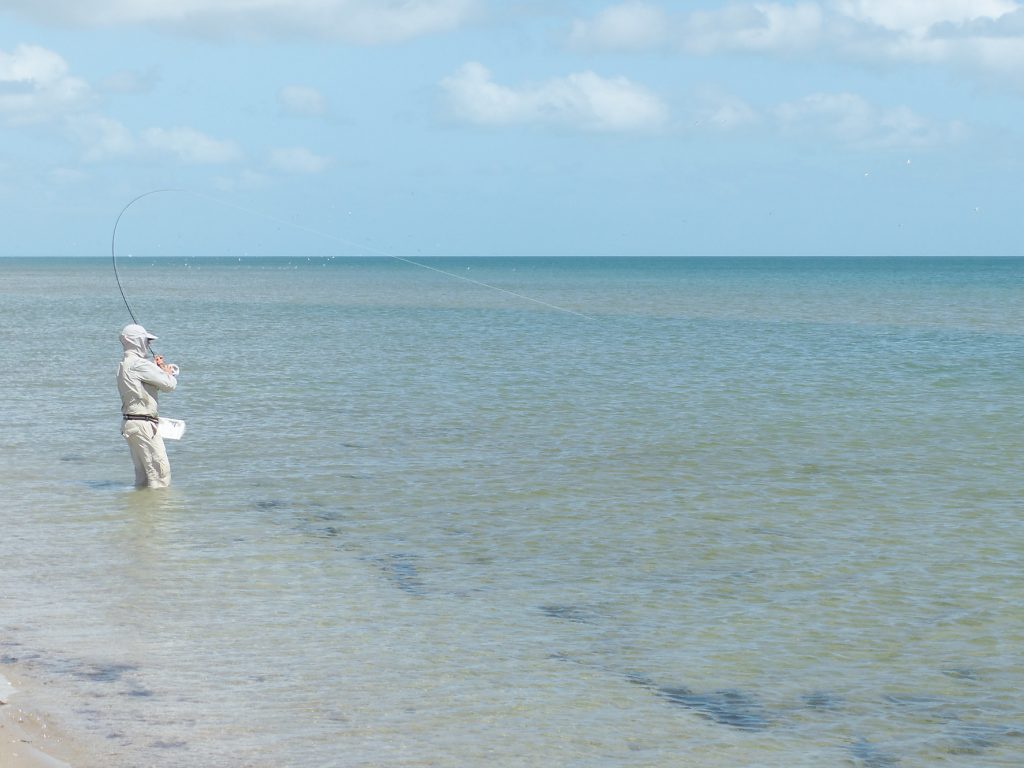 Even when fishing in water as clear as this it’s wise to remember there are crocs about. 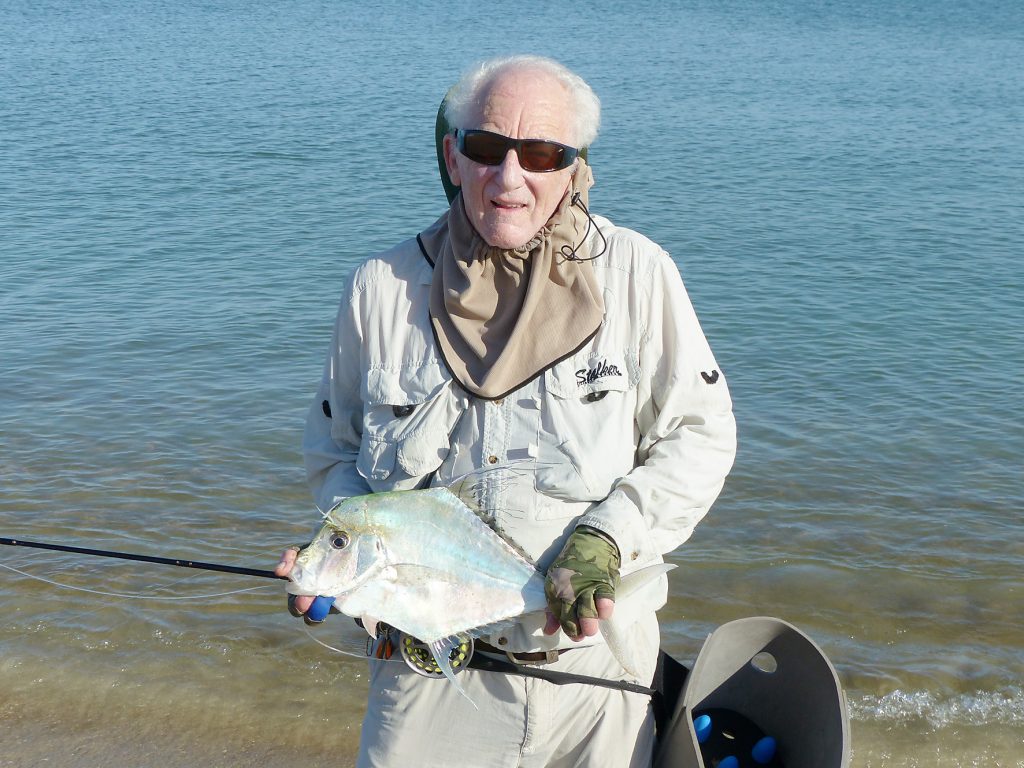 Diamond trevally are interesting fly rod captures at the Cape.

Logistically, air travel and hire cars aren’t hard to arrange, nor is it difficult to work out a good time to go. Go any time you can except for the main wet season of January to April! Flyfishing tackle for a trip of this nature might well be worth some serious consideration, though, because once you’re on the beach you’ll need to have everything just right or you can reflect at leisure on your bad choice of tackle or lack of preparation.

For my beach fishing I favour an 8wt outfit over heavier tackle. For several years I’ve used a TFO Mangrove four-piece rod with matching TFO 375 reel and this has been a brilliant piece of kit. The TFO Mangrove has reserves of power while being extremely easy to cast and the TFO 375 backs my fly line with 300m of 50lb braid for those times when the reel’s doing 500rpm and I’m hanging onto the rod tightly.

Fly line choice comes down to either a floating or intermediate sink rate line, as most fishing will be in quite shallow water. The clue is to have a spare spool with an alternative line handy to make the best of any situation. Large tarpon are frequently found along the Cape coastline and these fish have a definite penchant for surface feeding and taking in a gulp of air while up top, hence you’ll need a floating line when a school of these hard pulling rockets is on the job.

One of the interesting things about tropical fish – when encountered for the first time by a southern angler – is their sheer speed. Everything seems to happen in an instant. They move swiftly, feed quick, and pull hard when hooked. Naturally, to get a hook-up from a fish that’s moving rapidly, it’s necessary to retrieve the fly as quickly as possible to excite the bite. Big fast strips are required, so have a stripping basket to gather up the fly line to prevent tangles on take off, or just to make it easier for the next cast.

Whether it’s queenfish, trevally, GTs, blue salmon or tarpon providing the entertainment, an 8kg breaking strain leader will take care of things with ease. Fish hooked on a beach should be allowed to gallop off, should they desire to. Setting the reel’s drag to a medium setting will allow a strong fish to run and towing the fly line around in combination with the reel’s drag will soon tire the rascal out.

Things are different around rocks and I opt for a 10kg tippet to prevent chafing on hard stuff, and to reduce bite-offs from mangrove jack teeth and slice-offs from barra gill covers. The reel’s drag should be set somewhat higher as well with some input from the rod hand to keep things under control.

Barra and jacks aren’t inclined to advertise their presence in the way the surface feeders do, so the surprise attack from one of these hard hitters can see the angler taken aback. A ready reel and a strong rod hand are wise precautions.

Additional things that the angler will find handy when enjoying flyfishing from the beach might include pliers to extract hooks from sharp-spined queenies, a couple of spare spools of tippet material, plenty of flies for the job, ample sun protection, water to drink in the backpack and sturdy footwear, as stonefish are common in areas where there are small outcrops of rocks or reef.

There should also be a definite awareness that crocs are always present. This last point is a deadly serious one and not to taken lightly. Keep on the move when fishing from the shore, especially if the water is somewhat dirty. Making a cast then moving along a few metres for the next one will help you avoid becoming the major topic for the news in the next few days.

Flies that do the job from the beach are simple minnow patterns. Use smaller hooks as baitfish are usually pinkie finger-sized. On my last trip to the Cape I had the chance to tie up some flies with the renowned Partridge range of hooks. I was very impressed with these straight eye hooks, as they were very sharp, very strong, and the Attitude Extra ACSX I made my flies on had a wide gape, which really assisted hook-ups.

FLY TYING’S PART OF THE FUN

Making flies is also a major part of a Cape trip and on my last journey there I found a Solarez UV Resin Roadie Kit brilliant for finishing fly heads, as it provided for three different rates of hardness when dried.

by Wayne Kampe • Every year New England trout seem to surprise me. During last summer, water temperatures in some of these waterways reached high levels that fairly tested the survival of the resident trout. […]

by Ross Virt • Australia is a country that has it all: wilderness, dramatic scenery, crystal-clear streams full of Murray cod and the opportunity to take them on the surface with the fly rod! The […]

by Adam Smith • Jounama Creek is a small creek that winds its way from the Snowy Mountains high country to the base of Talbingo Mountain. Believed by some to be an natural trout spawning […]