It is not necessary to own a boat of any kind in order to access fantastic Murray cod fishing these days. Gone are the days where you needed a boat to take you to far away corners of lakes and rivers to find the elusive Murray cod in seldom fished pockets of the waterways.

Murray cod stocking combined with improved habitat and far better management of our waterways has led to the amazing Murray cod fishing that we experience throughout the Murray Darling basin today. From large impoundments such as Lake Eildon to small branches of rivers and creeks, Murray cod have infiltrated most of our lowland waterways that have a permanent flow of water.

As most land-based fishing for Murray cod is done in rivers and creeks, this article will be focused mainly on such waterways. In saying this, most techniques will work equally as effectively in impoundments.

Both bait fishing and lure fishing are very popular and successful when land-based fishing for Murray cod. 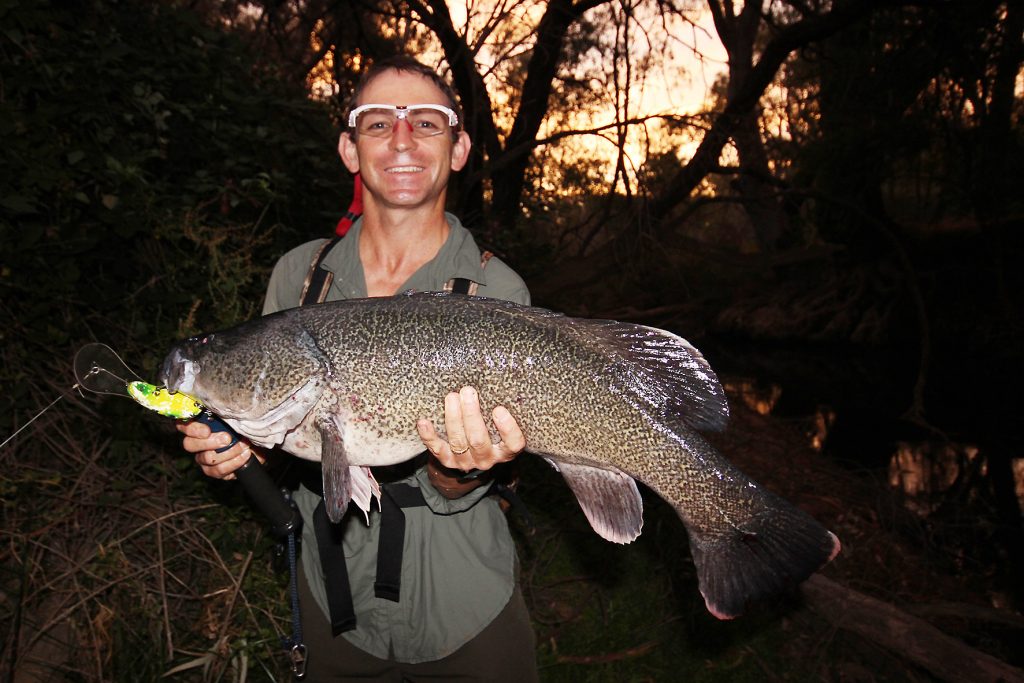 Sandy Hector landed this magnificent 81cm Murray cod while casting a JD Superbug diving lure from the bank of a small river. 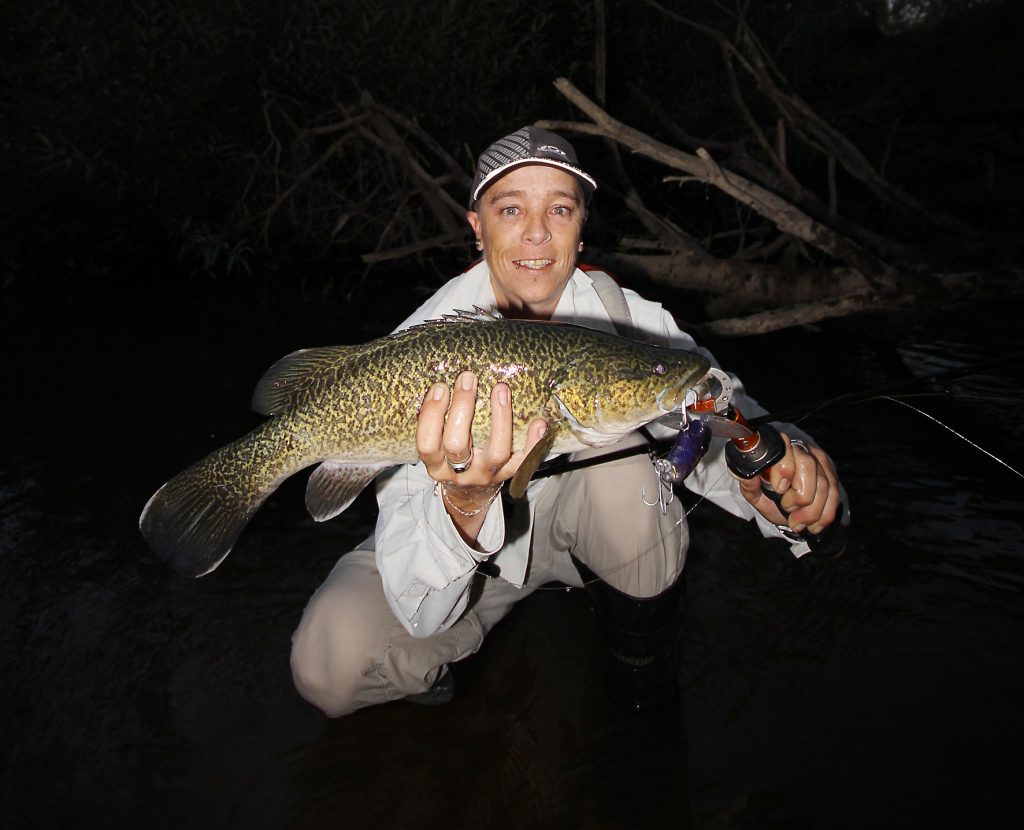 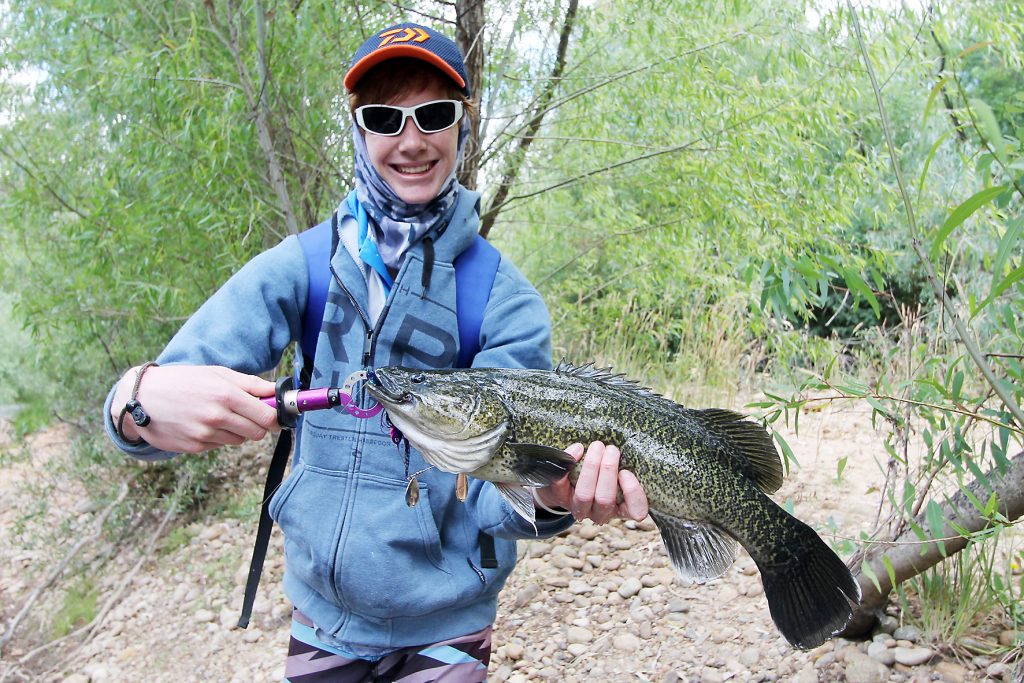 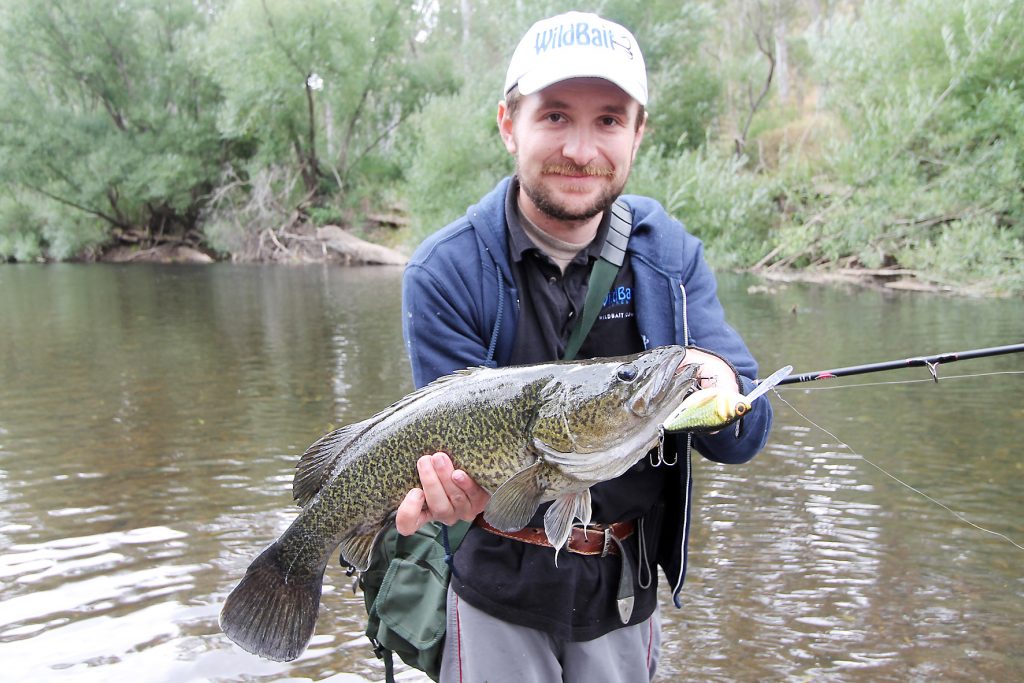 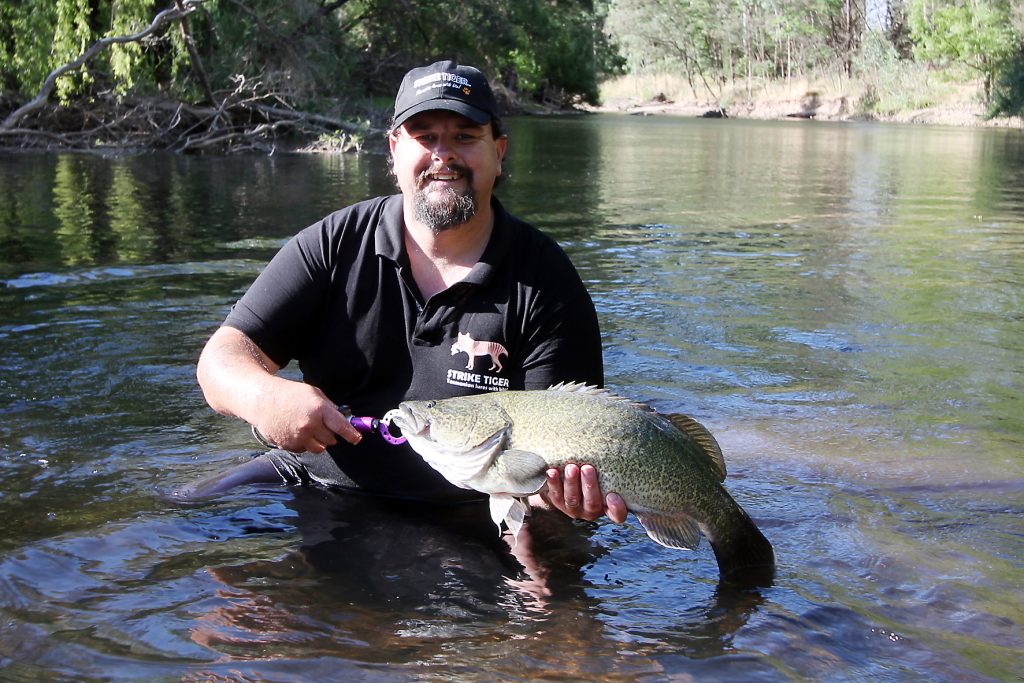 Shore-based fishing isn’t always shore-based when you’re Murray cod fishing in summer. Actually getting into the water and wading is a relief on those really hot days. 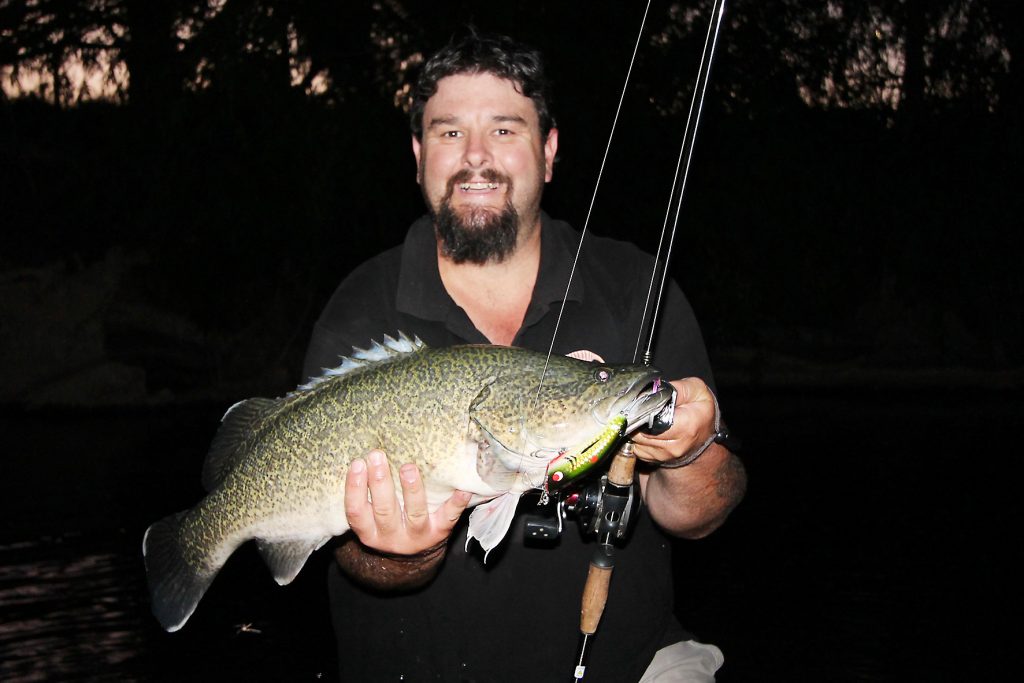 This lovely Murray cod went ‘boof’ after sunset on a balmy summer evening. 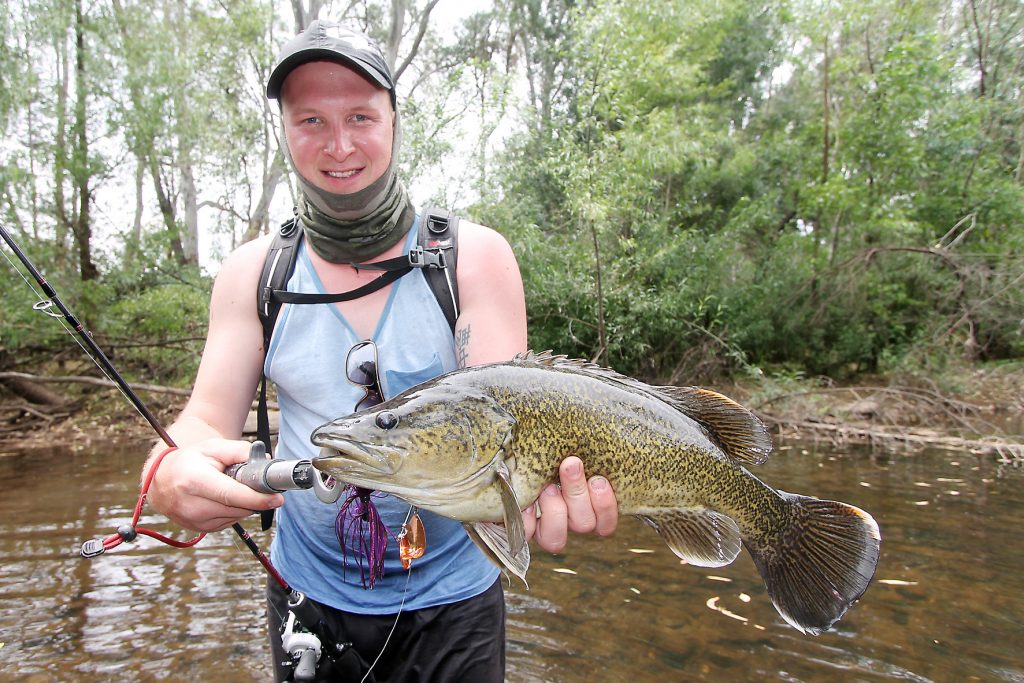 Brenton Richardson with a nice clear water cod caught while wading up a clear upland river. 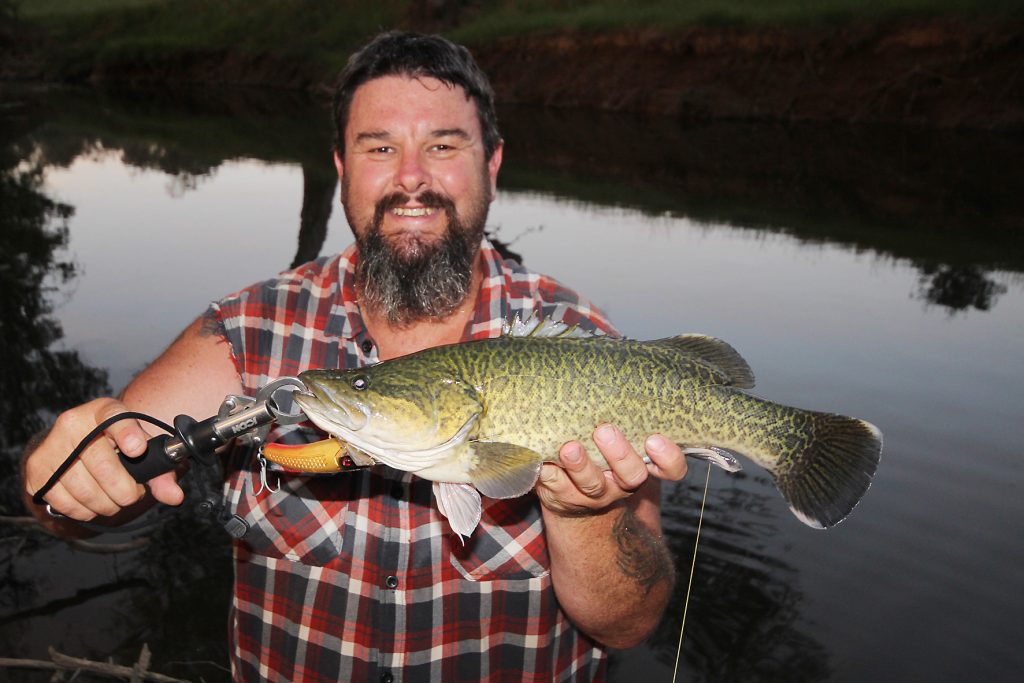 After the sun sets, is a great time to bring out the surface lures. 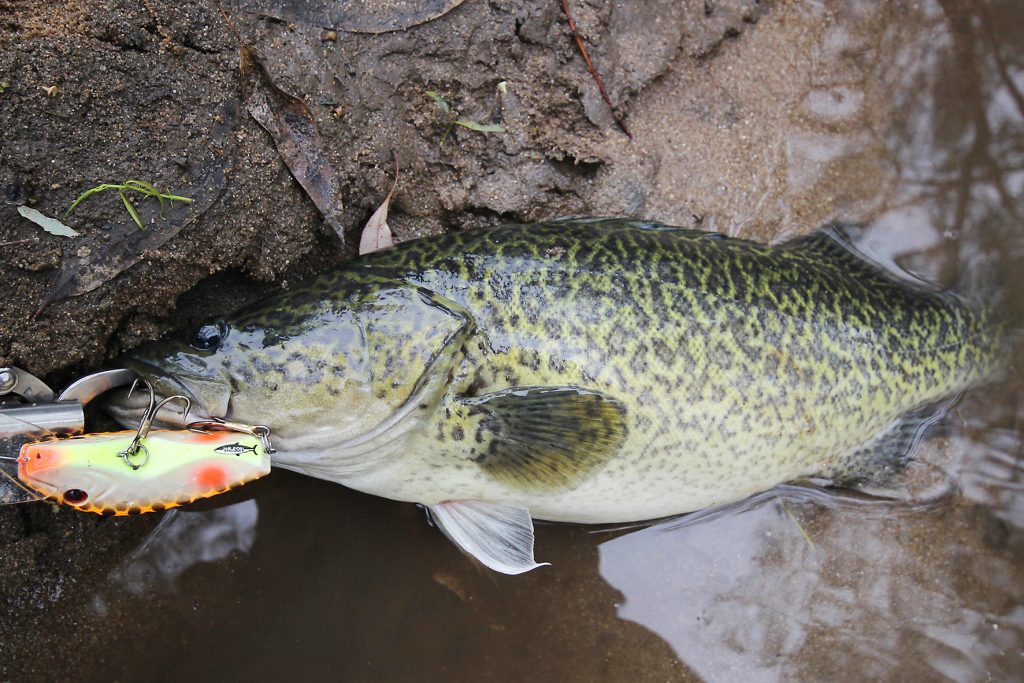 The Wilson Slickback lure is a fantastic lure for Murray cod lure casting from the bank. 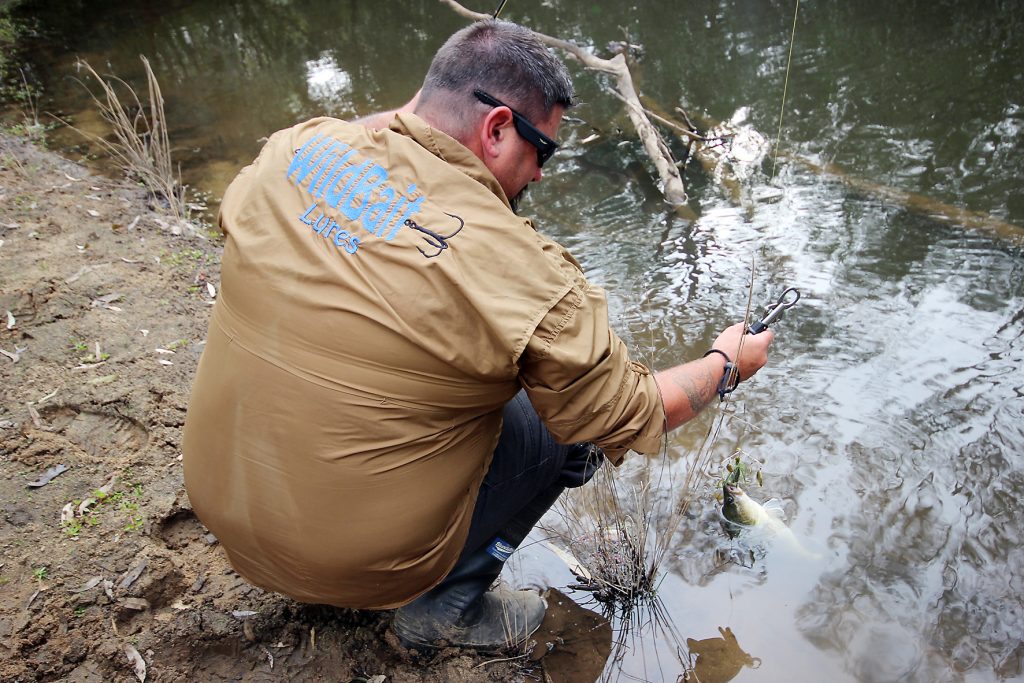 Landing a small Murray cod caught while casting a spinnerbait from the bank. 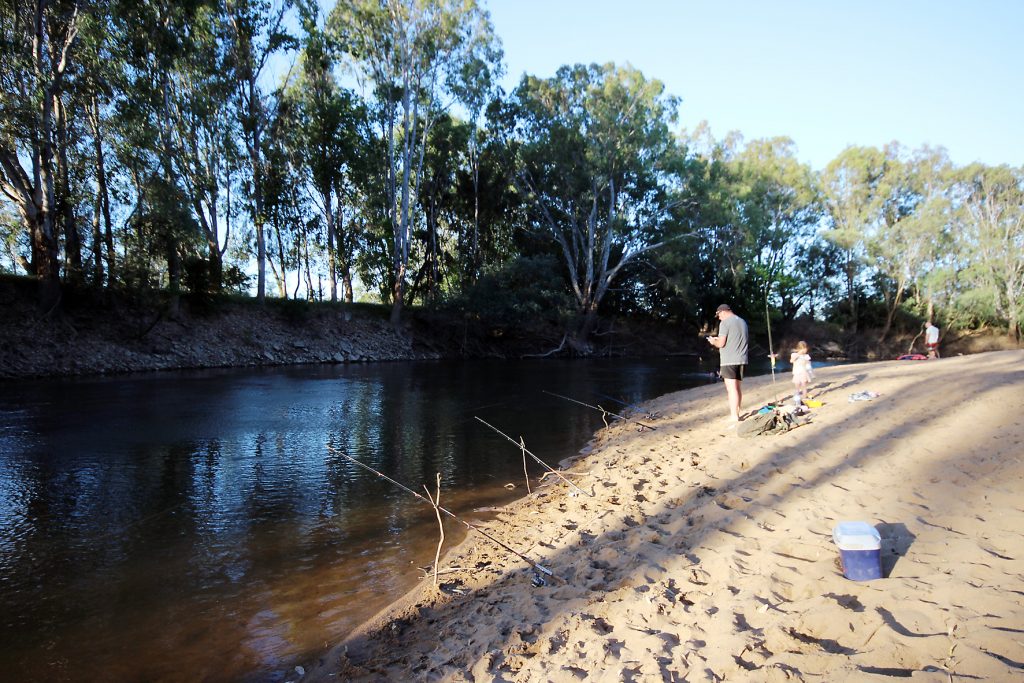 Catching Murray cod on bait from the bank has never been easier than it is today. The night this photo was taken about 10 cod were caught just fishing off the bank at the most popular swimming hole in Wangaratta, the North Beaches. The kids loved it! 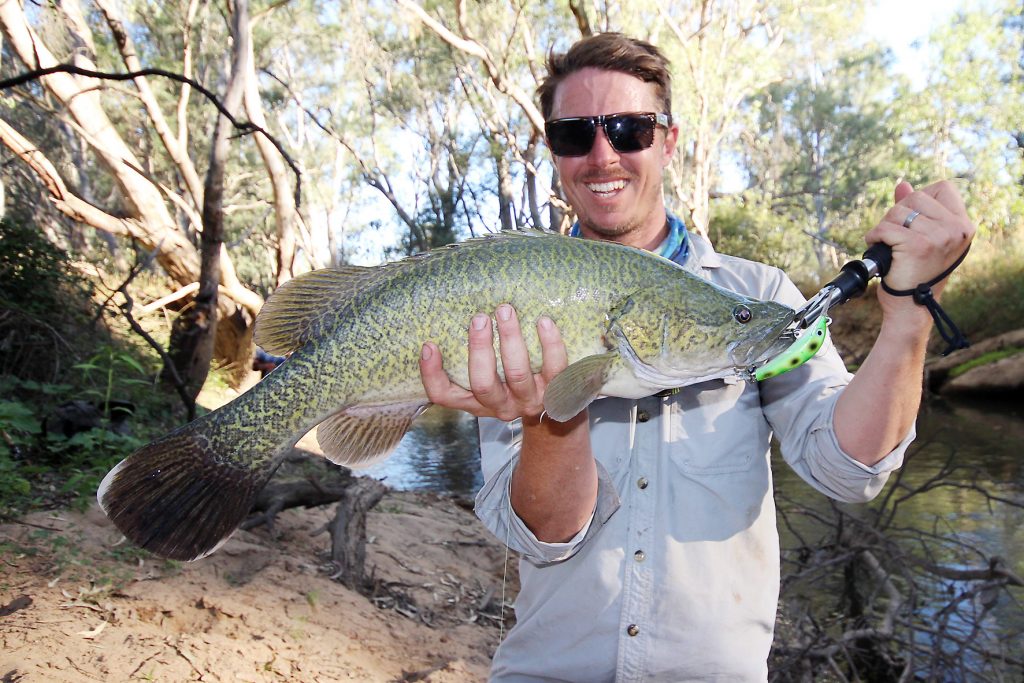 Scott Turnbull with a lovely Murray cod caught casting a number two StumpJumper from the bank.

Bait anglers should try using baits such as bardi grubs, yabbies and cheese. With any of these three baits, the bigger the bait you use the more likely you will be to hook a larger Murray cod.

Bardi grubs can be very expensive, ranging from $2 to $4 each. They are fantastic bait for Murray cod; however it is worth learning how to find them yourself. This alone is back breaking work for an old man like me.

In my younger, fitter days I chipped thousands of bardi grubs. Bardi grubs are found in deep small sealed burrows underneath gum trees. Try find a large old gum tree, and then chip the top few inches of soil off, exposing the bare earth. Do not dig deep, there is no need and you will make an unnecessary mess. Chip the surface and look for a small hole around 1-2cm in diameter with a brown lining around the sides. Lower a bardi grub puller (available at many tackle stores) down into the hole and lasso the bardi grub. You may try dozens of different trees before finally finding one with bardi grubs underneath it. As this is disturbing the soil, make sure that you are on private property with the permission of the landowner and always clean up your mess.

Yabbies are a tried and proved bait. As stated, the bigger the better. Murray cod love a large food source. They do not like to leave the cover of their hide during daylight hours, so in order to entice them out, present them with a large yabby that is too good to refuse. No freshwater yabby could ever be too big for a hungry Murray cod.

Cheese is a relatively new bait for Murray cod. While cheese itself has been around for many years, it wasn’t until the last decade or so that people started realising the potential of it as a Murray cod bait.

There is a myth surrounding the use of cheese as bait. Some people say that it shouldn’t be used as it blocks the cod up, causing them to die. Some people also have this strange belief that it is illegal.

Cheese is not an illegal bait, and with the amount of anglers catching Murray cod on cheese each summer in Wangaratta, there would be dead fish floating everywhere if the other stories were true.

Mozzarella cheese is the best, as it has a texture a lot like rubber and is more likely to stay on the hook when you cast it out. Tasty cheese certainly catches cod, but often falls off the hook when casting.

I cut my mozzarella cheese into small cubes about 1.5cm long and usually put 3 or 4 cubes on the hook. You would be amazed at how many Murray cod I catch doing this!

Large scrub worms are also a great Murray cod bait, however I do find that they have a tendency to catch mainly smaller Murray cod.

With any bait, try find a nice deep hole with a large log. Rather than cast all the way to the other side, just lower the bait down beside the log, hard up against it. There’s every chance that the Murray cod will be sitting just underneath the log, and by doing so you will be putting the food in its face.

We used to get told to stop reeling in our lines all the time. Forget those lectures, those days have gone. Moving your bait regularly, even if it is in the same spot is all the rage these days. The Murray cod is more likely to strike the bait the moment it sinks a lot of the time.

The current boom in lure fishing is real, and it seems everyone is making lures these days! The three types of lures most commonly used for targeting Murray cod are deep-diving lures, spinnerbaits and surface lures.

Deep-diving lures are usually large, and take on the appearance of a fish swimming under water. Popular lures are large number 1 StumpJumpers, Wilson Slickbacks and AC Invaders, but there are many others.

One of my favourite deep-diving lures to use when land-based fishing for Murray cod is the large number 1 StumpJumper, with light green being my favourite colour.

A stiff, firm rod is needed when casting and retrieving such large lures as they displace a lot of water. I simply cast the lure out, and real it in, paying particular attention to snags in the water. Log jams in the middle of the river are great places to find Murray cod.

A lot of the time, Murray cod will hit my lure within the first meter of the retrieve, as they are holding close to the banks under the tree roots.

When passing my lure through snag-infested sections, I slow my retrieve right down to a crawl to aid it to float over the logs a little bit and also to keep it in the Murray cod’s face for longer.

Spinnerbaits have exploded in popularity over the past two decades. Although they have been around much longer than that, it has only been in this short timeframe that they have really been recognised as a leading Murray cod lure.

Spinnerbaits are great in that they can be fished vertically. They can be cast next to a good looking log and allowed to sink straight down into the zone where you think a Murray cod might be holding. They can be retrieved really slowly along the bottom in amongst the thick structure, or they can be worked shallow. Spinnerbaits are a very versatile lure and can be fished in any depth of water. Best of all, Murray cod love them!

Surface lures are my favourite. There’s nothing I love more during the summer months than to walk along the banks of my local waterways casting surface lures into the most snag-infested sections of river where most deep diving lures would probably either die of fright or get lost!

The hook-up rate with surface lures is not as great as it is with diving lures or spinnerbaits, however surface fishing for Murray cod is more about the ‘boof’ than actually catching the fish.

The boof of a surface feeding Murray cod is quite explosive, and even the smaller Murray cod tend to give anglers a fright, especially when the boof is close to the angler’s feet.

Lure losses are much less frequent when fishing with surface lures, as the lures do not dive, meaning they do not often get snagged. Occasionally they will get snagged on something just under the surface that may not be visible when making the cast, and a few find their way up into overhanging gum trees occasionally, but on the whole surface lures tend to live a much longer life in your tackle box than spinnerbaits and deep diving lures.

Most Murray cod surface lures swim across the surface making a plopping sound as they swim. Their retrieve speed can be varied and they can even be paused in one spot with a few twitches of the rod tip, sending out rings around the lure to attract a Murray cod’s attention.

Unlike diving lures or spinnerbaits, when a Murray cod hits a surface lure, it is important that you do not lift your rod tip to set the hook. You need to pause, and allow the fish to hook themselves, which may take several boofs. If you lift the rod tip, you will pull the lure away from the fish, and potentially hit yourself in the face with a hook.

December is my favourite month of the year to go cod fishing and typing this report has only made me even more excited as my memory casts back onto some epic Murray cod fishing moments last season.

by Jacko Davis • December marks the return of Murray cod fishing after a three-month closed season in our rivers and the majority of our impoundments. The Murray cod is the Australian icon of the […]