One of the most commonly used hook rigs for beach fishers, especially in Southern Qld and Northern NSWs, is the ganged hook rig. Whether you’re fishing with pilchards or other long, thin baits such as fillet strips, whole squid and other whole fish, the ganged hook rig is a great way to present your bait. It also has a greater hook-up rate than many other rigs.

The traditional way of joining hooks has always been eye to shank. Many hook patterns, such as Mustad 4202D and VMC 8755, are made with opened, turned in eyes to make the ganging process easier. The downside of joining the hooks eye-to-shank is that the rig is fairly rigid. This rigidity makes it more difficult to put the bait on the hook and also means that the hook eye can distort or even break due to the torque created when the hooks are bent in opposing directions.

Many years ago, anglers began experimenting with different hook styles and methods of joining the hooks, and came up with the swivel-linked ganged rig. This modification solved the shortcomings of the rigid eye-to-shank rig, replacing it with a more flexible and durable hook rig that make it easier to put the bait on. Additionally, as a result of each hook being able to move independently, this rig has a higher hook-up rate and is less likely to fall out during the fight.

For whole fish baits, I put the hooks down through the back of the bait. This decreases the hooks’ visibility and places the hook points in the soft gut cavity which is easily punctured when a fish bites down on the bait.

Another advantage of this placement is that it creates a central pull to the bait, which makes it appear more natural in the water. The leading hook is in the hard head which decreases the chance of it tearing out during an aggressive cast. Rigged in this way, pilchards make great cast-and-retrieve offerings when slowly rolled through the water, especially in the surf for tailor.

While many of the original ganging hook patterns can be used for this rig, you will get a more compact and neat rig by using inline hooks (not offset) with straight eyes (not turned in or out). The main patterns I use are the VMC 9255 and Tru-Turn 711, which are both readily available. In fact, I use a combination of these two patterns for my preferred rig. The Tru-Turn hook pattern has a kink in the shank which helps roll the hook point upright as a fish bites down on the hook. This increases the hook-up rate with the hook commonly piercing the roof of the mouth. For this reason I use this hook pattern for the two rear hooks in the rig as they can both swivel independently which offers awesome hooking potential.

For the leading hook in the rig I use the straight shanked VMC 9255. It makes the bait more stable in the water and decreases the chance of a pilchard or other whole fish bait spinning. In a moderate current the bait should just waft slowly side to side, which makes it look more lifelike and enticing to predating species. For this to work however, the leading hook (VMC 9255) needs to be placed centrally in the head, approximately halfway between the eye and the nose of the bait. Additionally, the bait needs to be straight and a little flexible. This hook placement keeps the mouth of the bait closed and keeps the whole rig streamlined.

Now let’s look at the steps in making a good, flexible ganged hook swivel rig and putting on your pilchard.

Both the VMC 9255 and Tru Turn 711 have closed eyes so we need to begin by opening these so we can put the swivels on. Although some multi-purpose pliers have hook eye openers, I prefer to use a pair of side-cutters as it is less likely to weaken the hook eye. Put the side cutter’s two blades against the gap where the end of the eye meets the shank and squeeze down on the handles. 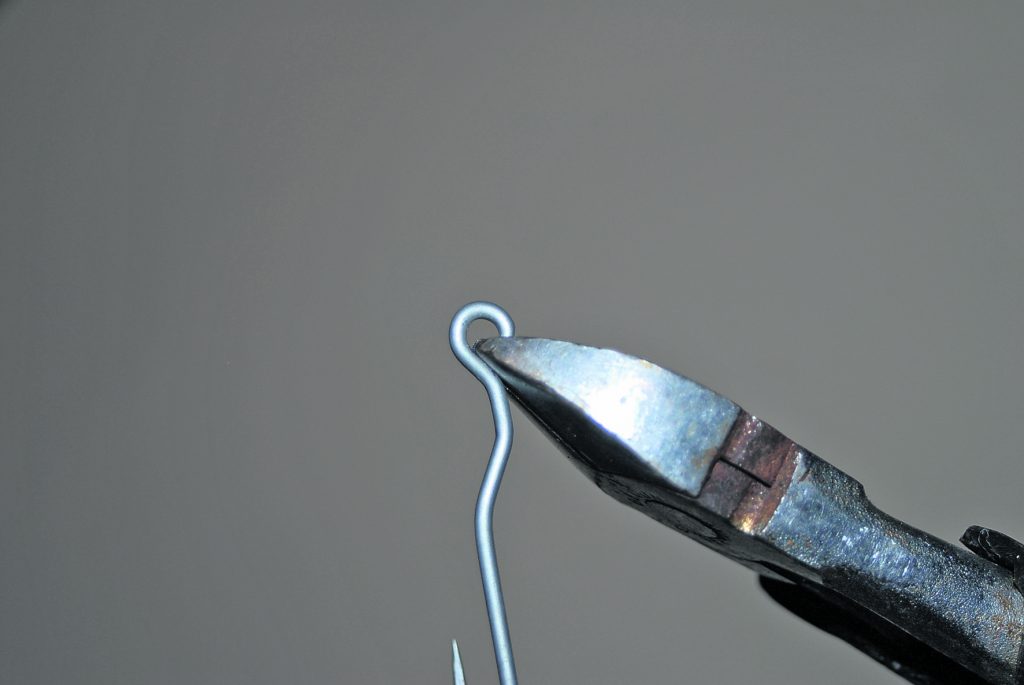 Depending on the type of side-cutters used, you may need to open the eye a little more. If so, slightly pry the tool outwards against the hook to open the gap enough to put the swivel on. It will only need to be opened a little bit however as the swivel eyes are not very thick. 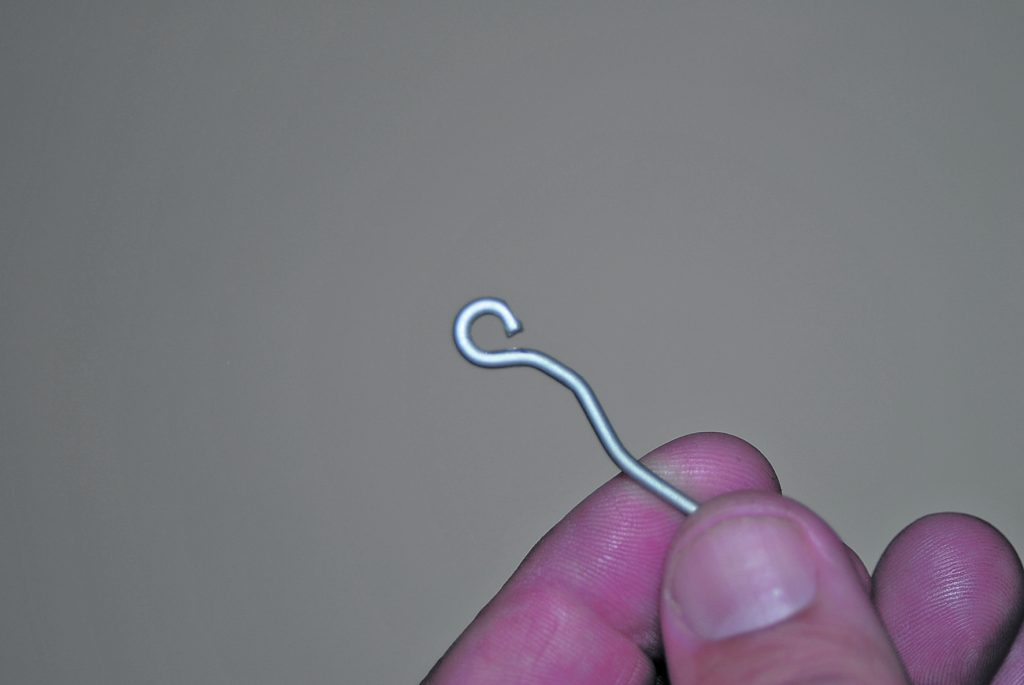 Now you need to choose a suitable swivel. I use Shogun rolling swivels [see inset for the correct sizes for VMC and Tru-Turn hooks between 3/0 and 6/0]. For other swivels and hook patterns you will need to ensure that the swivel moves freely over the hook shank and that it cannot slip over the barb of the hook. 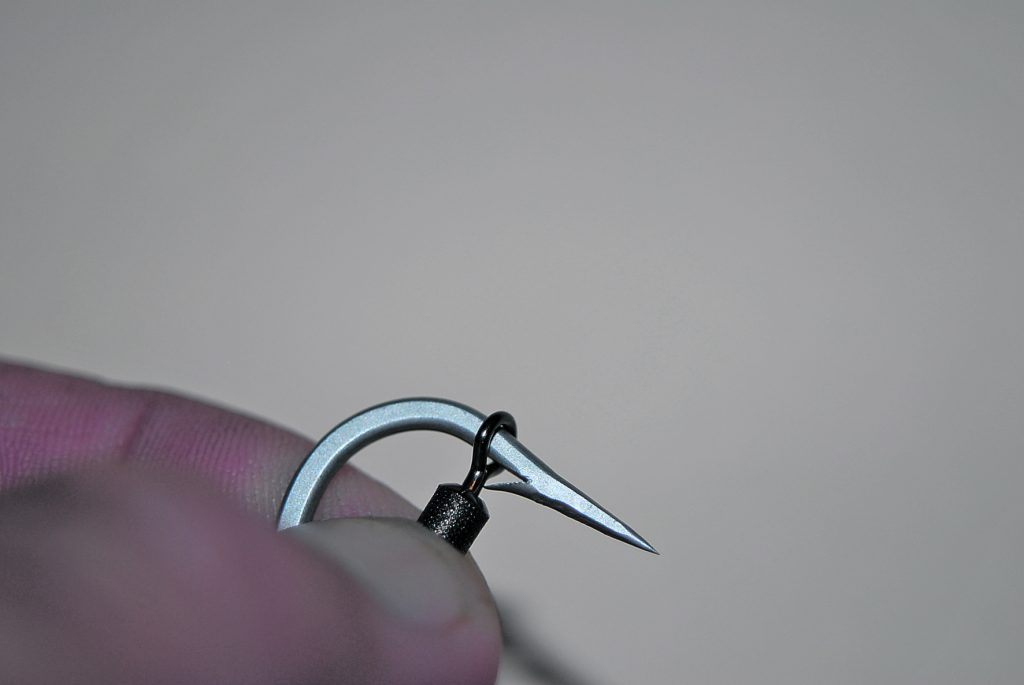 Let’s start with the middle hook of the rig, a Tru Turn 711. Put the first swivel on and let it slide down and around to the hook bend. Put the second hook on and leave this one on the hook eye. 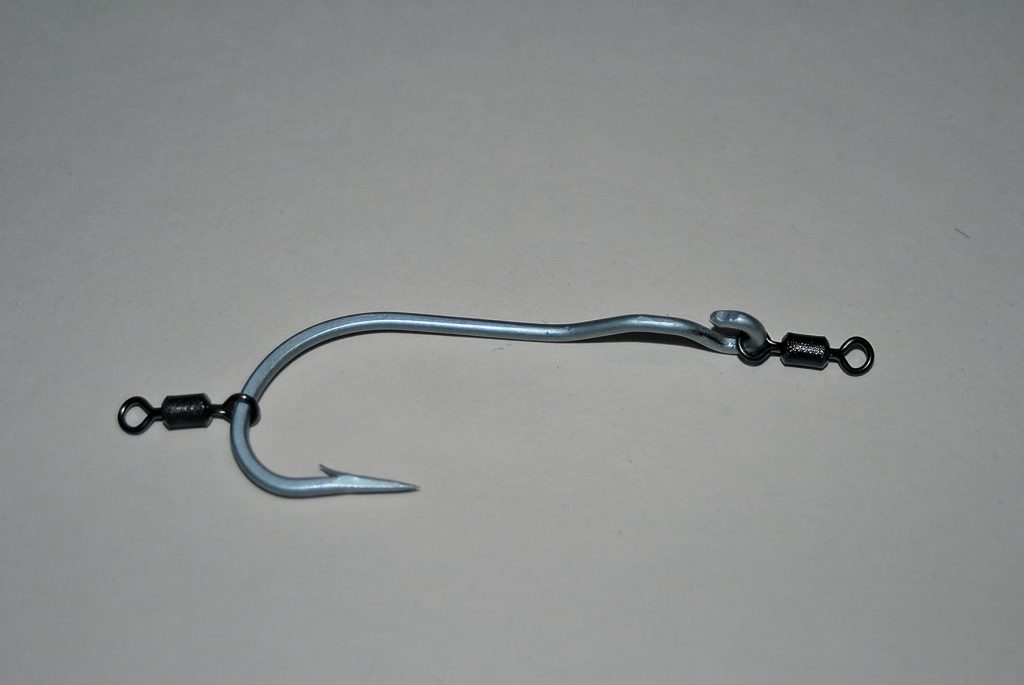 Use a pair of pliers to close the hook eye. I like to use my crimping pliers as the dual action and grooves in the blade make this task easier. Be careful not to crush or damage the swivel while closing the hook eye. 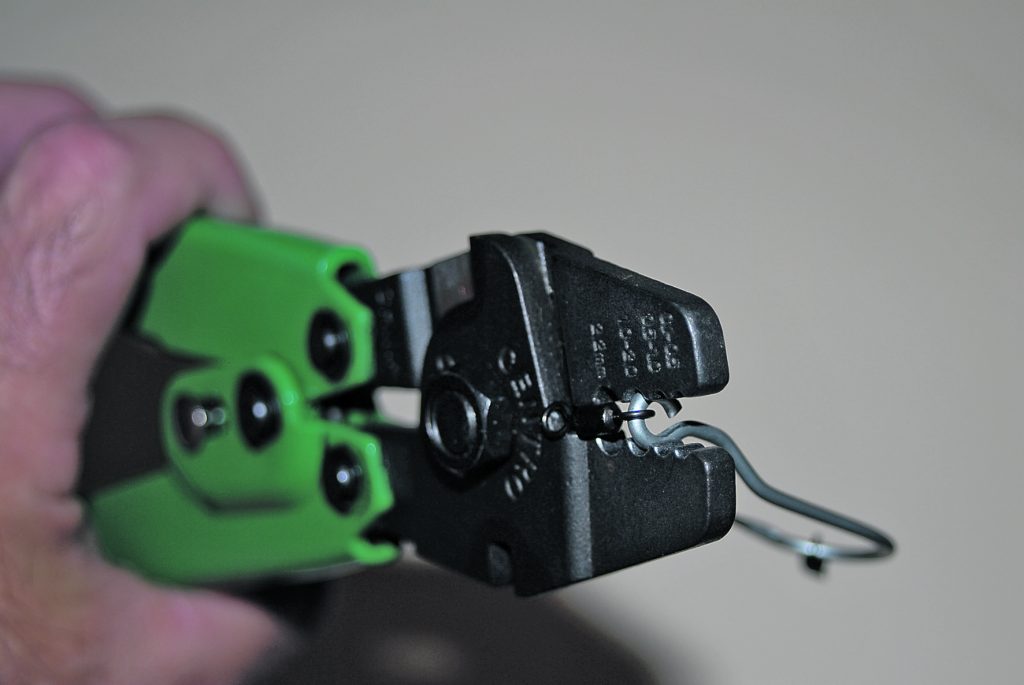 When closed, there should be a flush meeting of the metal with no gap left where the eye meets the shank. 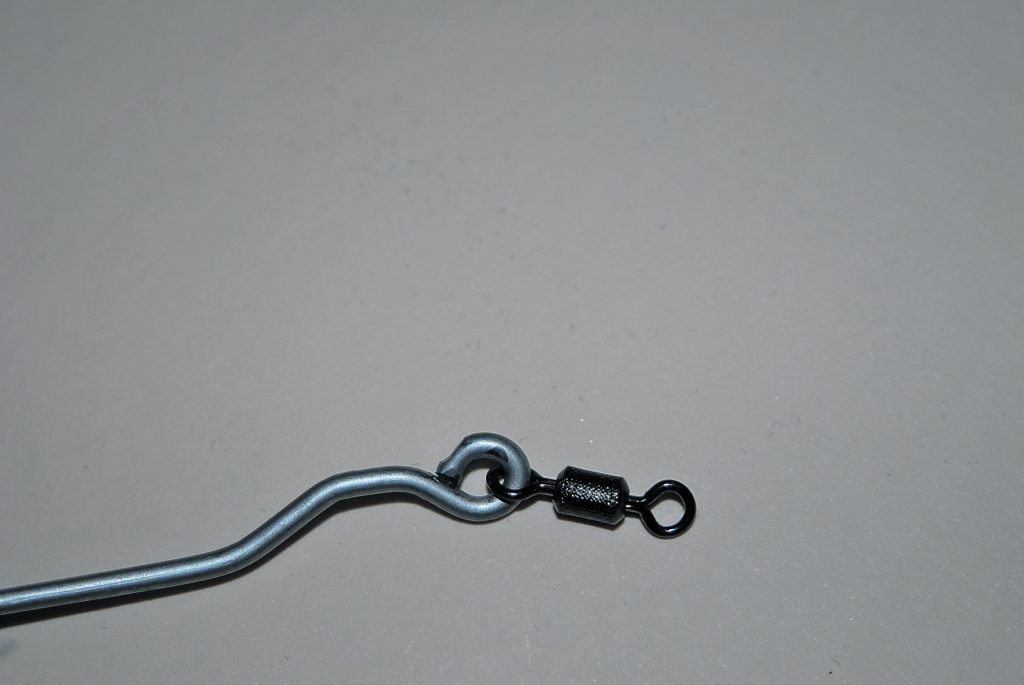 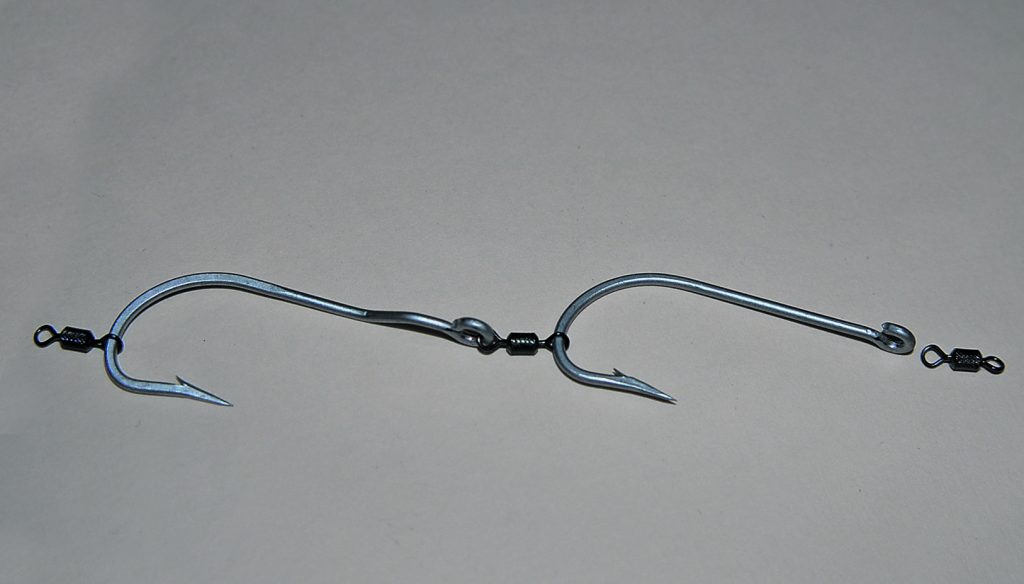 To finish the rig, put on the trailing hook (Tru Turn 711) by passing the lower swivel of the second hook over the eye and then closing. Your rig should now look like this. 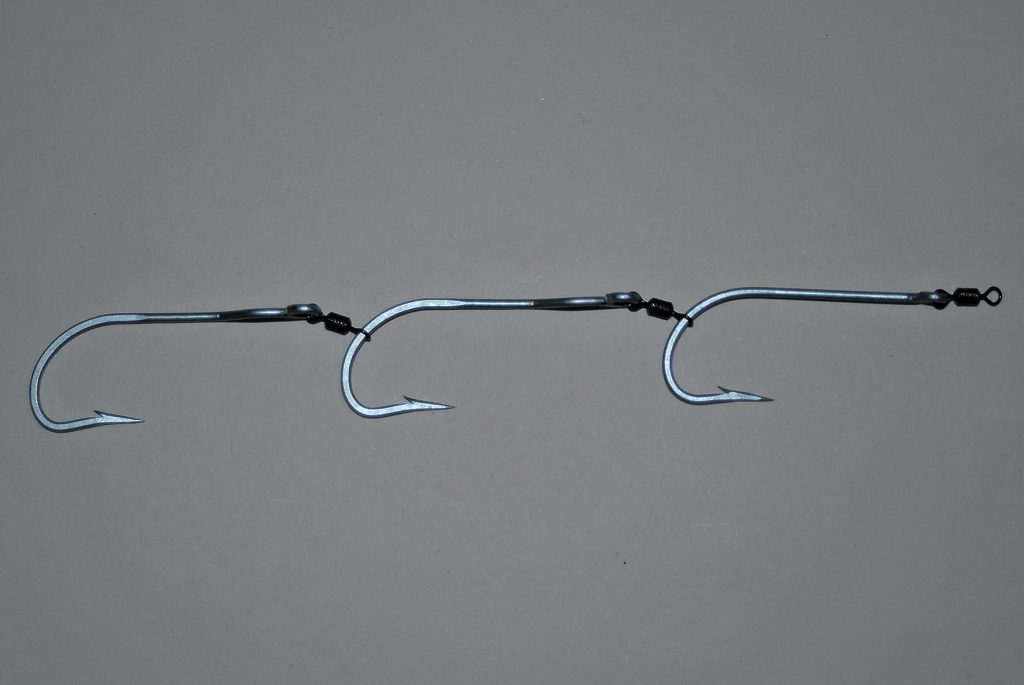 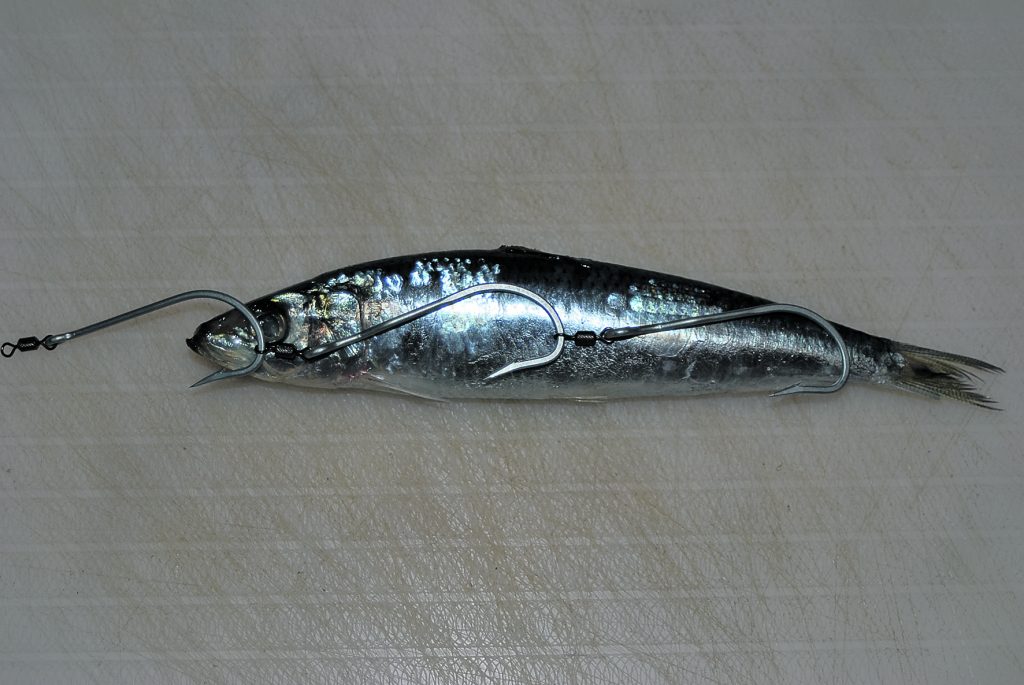 Insert the hooks down through the middle of the back of the pilchard as shown with the leading hook placed centrally through the head. Your pilchard is now ready to be deployed. If you need a little more weight you can add a sinker directly in front of the hook. 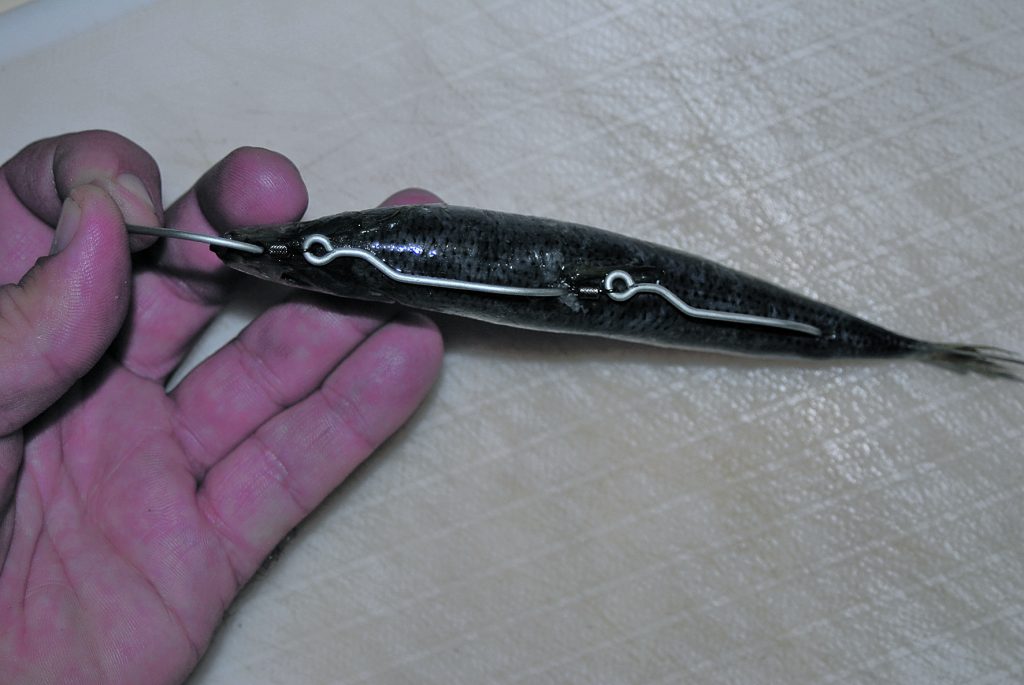 Rigging baits well will definitely increase your chances of initially hooking and staying connected to a fish. Good bait presentation can often mean the difference in acceptance or refusal of a bait, which makes a dramatic difference to your end result. For pilchards, gar and pike, this rig is the best I have used, especially when targeting tailor, mackerel and other toothy critters which can easily bite through hook rigs snelled on monofilament or fluorocarbon.

The ganged hook swivel rig is flexible, easy to insert, durable and has low visibility when inserted in the bait. You’ll need different sizes depending on the baits you’re using, however a 4/0 or 5/0 will suit most pilchards.

These rigs are also easier to store than normal gangs and you can fold them up and wrap them in alfoil. You can prepare a heap of different sizes in twin hook, three hook or four hook gangs ready to suit a variety of bait sizes and types. I’m sure you will love using them. 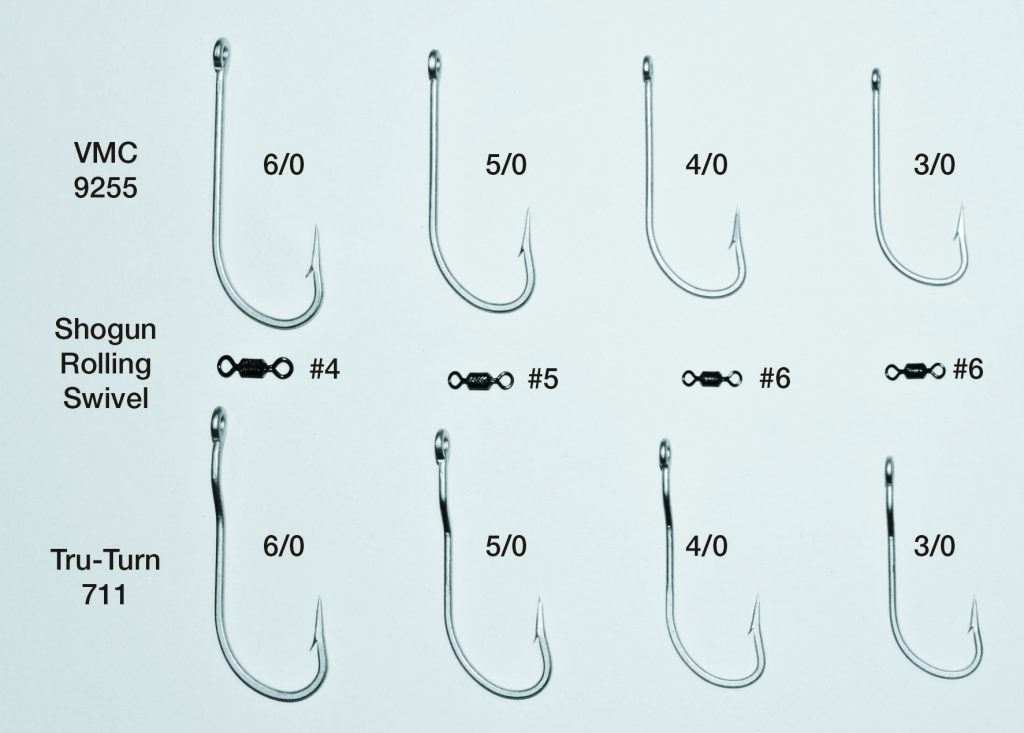 by Gordon Macdonald • The cooler months are a great time to catch bream throughout Southern Queensland and even further afield. The larger specimens arrive en masse into the estuaries to breed. Savvy anglers take […]

Whip up a succulent salmon and soy fusion

by Lynn Bain • Fusion, in cooking terms, is the combining of techniques and ingredients from different food cultures. In this recipe we take some favourite Asian soy sauces and add them to Japanese wheat […]

by Stephen Booth • Filleting flathead is one of those things most newcomers find a little difficult. And let’s face it, they are pretty weird looking fish. But they taste great, are reasonably abundant along […]