Bait is rather expensive these days and can take up a decent portion of your fishing trip budget. Pilchards are an extremely popular bait and are nearly always acquired in a frozen state. IQF (individual quick frozen) baits are handy, as you can just defrost the pilchards a few at a time as required, which helps to minimise waste.

Block pilchards require that you defrost the entire amount (generally around 2kg) so that you can use them. If you don’t use all of them soon after defrosting, the remainder are only good for berley. They will be mushy and commonly break apart after refreezing and then defrosting again. One way to toughen these baits and render them useful for future trips is to salt them down.

Apart from making pilchards tougher, salting can also make them last a lot longer without freezing, or even refrigeration. This is ideal when going on extended trips either offshore, or beach fishing where refrigeration access can be limited. The process of salting sucks a lot of the fluids out of the fish and also draws moisture out of the bacteria in the flesh, killing it or making it go dormant.

This means the flesh won’t decay or smell badly. Salting fish is extremely easy and relatively quick. If you have the salt at hand, it only takes a few minutes to do after returning home from a day’s fishing. There are several ways to salt pilchards and other fish. These are all relatively similar.

The longer you salt the fish, the firmer it will be and longer it will last. Salted fish can even be stored without refrigeration. The pilchards or other fish can simply be put in a large sealed container or bucket with plenty of salt and a few taken out as required. To stop the long-term salted pilchards going too hard, adding some borax (sodium borate, sodium tetraborate or disodium tetraborate) to your salt (about one cup to each 1-1.5kg) will help to keep pilchards fairly soft and pliable.

It is advised not to use iodised (table) salt to preserve your pilchards, as it is believed that the iodine repels fish. Iodised salt is also a little too expensive to use for this process anyway. Anglers commonly use coarse salt or swimming pool salt. A 10kg bag of pool salt can be purchased for around $5 from Woolworths or a 25kg bag of slightly coarser swimming pool salt is around $8 at Bunnings.

Basically, if you want salted pilchards that last a long time and don’t require any form of cooling, you can just put them in a sealed bucket with loads of salt and leave them. However, unless you add some borax, they can become a little too firm to be pinned on the hooks and used effectively for species like tailor. Lighter (shorter term) salting will firm pilchards enough to make them great baits, but they’ll probably need to be kept cool to last for longer periods.

I often salt and freeze leftover pilchards for the long term. Keeping them in the fridge or esky would be sufficient to preserve them for several weeks until your next trip. If heading away to somewhere with limited refrigeration, you may want to salt some pilchards a week or two before your trip.

For making great baits you will need some pilchards, newspaper or absorbent kitchen paper, a container with a sealable, preferably airtight lid or a large tray and some swimming pool salt. If you have some damaged pilchards, you will also require a knife and a small tray or bag to put them in. 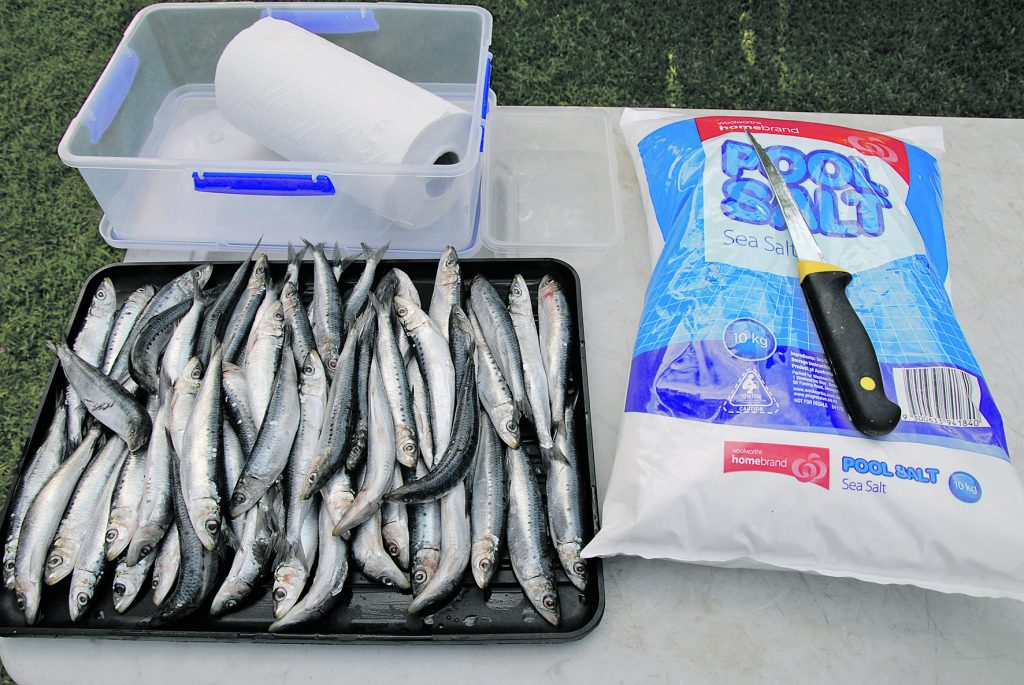 Put a few layers of kitchen paper on a tray or in the sealed container. Put 1-2cm of salt in an even bed on the paper. 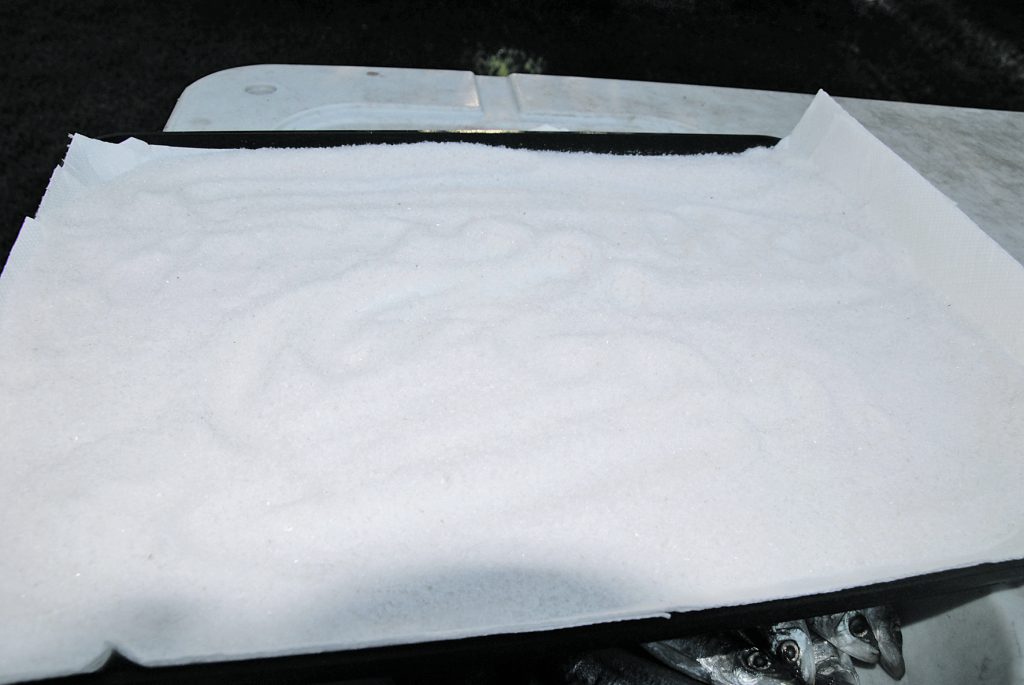 Any distorted pilchards should be straightened so that they will lay flat. They are much easy to straighten now than after they are salted. If you put them on the hook while distorted, they will spin in the current, creating line twist. Put aside any badly damaged pilchards. 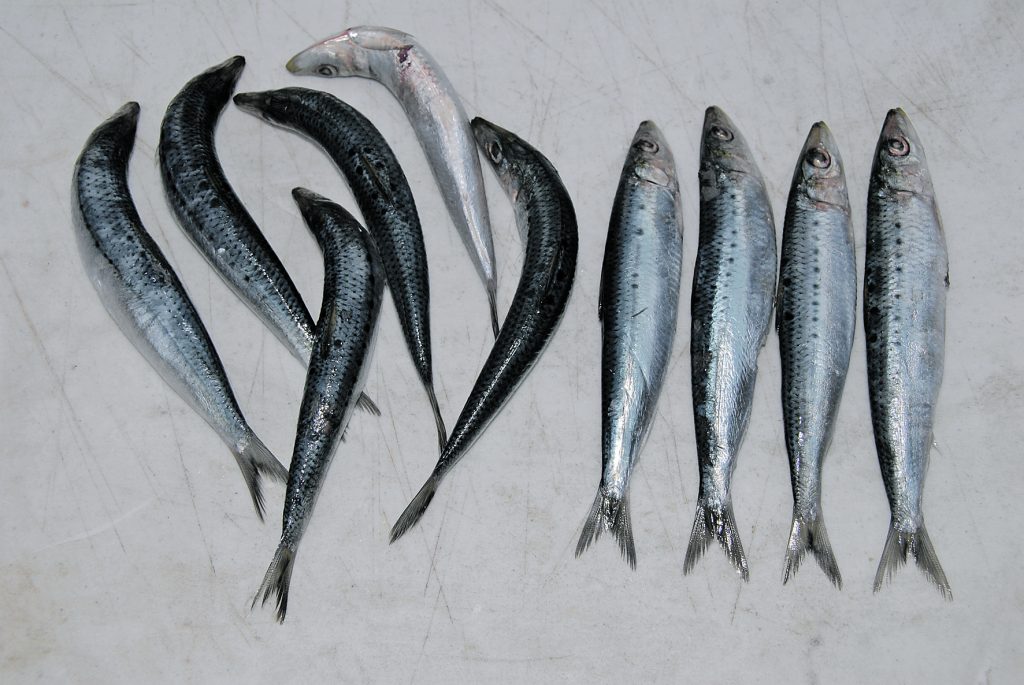 Lay the pilchards on the bed of salt in your container or on the tray in with a few millimetres between each one so that the salt can totally cover them. 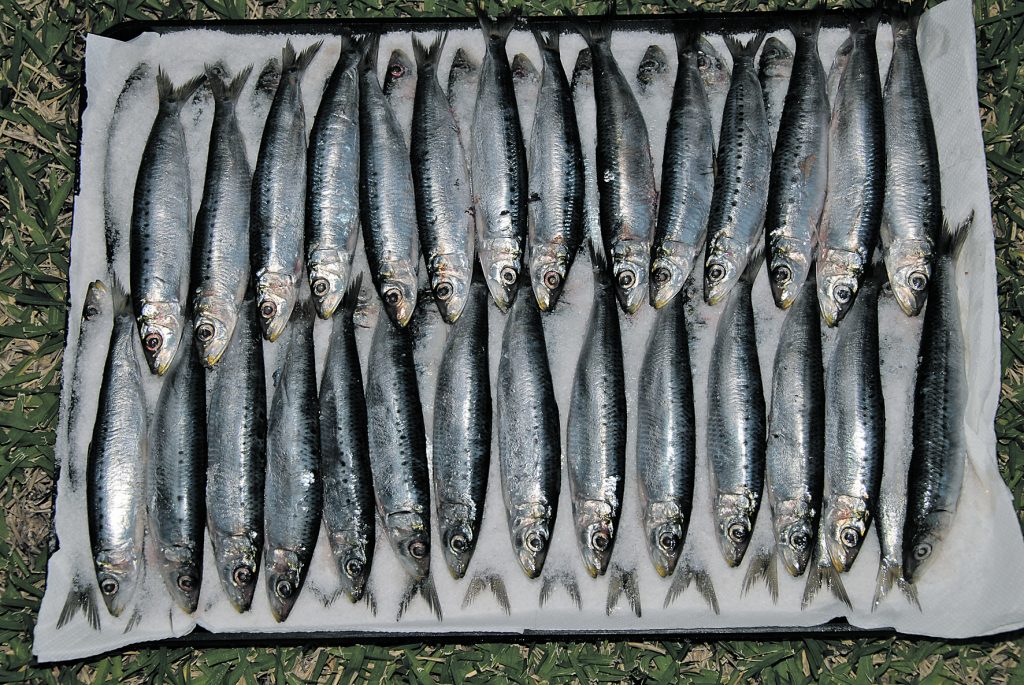 Put at least a centimetre of salt all over the pilchards and spread evenly. Make sure salt gets down between each pilchard. Give the tray or container a little shake to ensure salt gets into all the grooves. 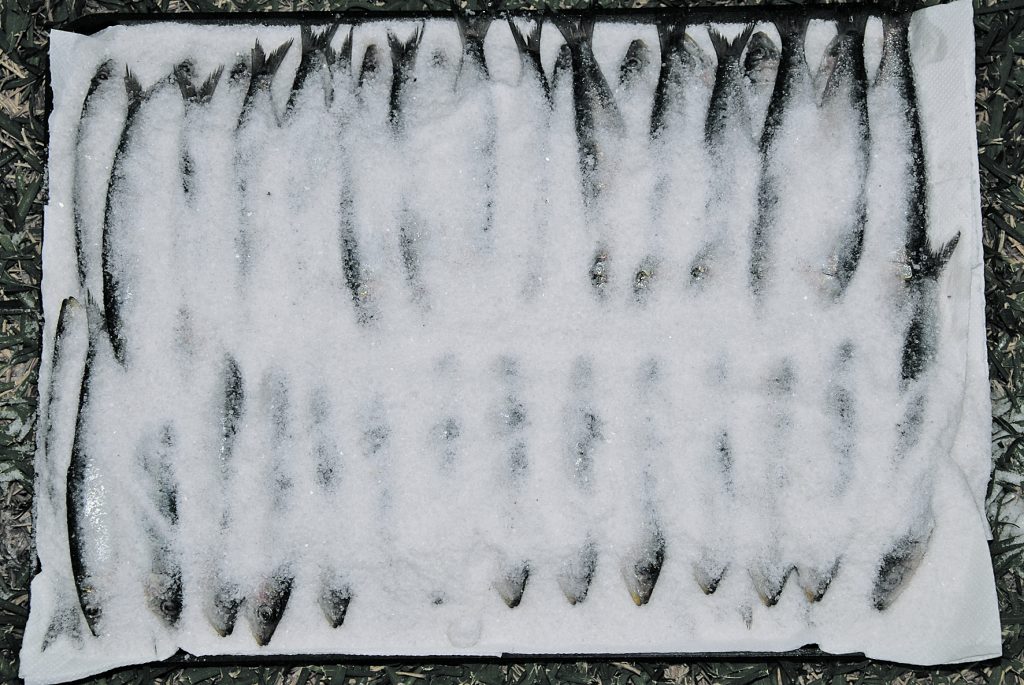 Put on more layers of pilchards and cover each with a good coating of salt and stow in a cool area or the refrigerator, preferably overnight. If you were storing the pilchards for a very long time, or wanted them extra firm, then you are best to simply put them in the container with the sealable lid. Apply a heap of salt on top and then store in a cool place for use when needed. 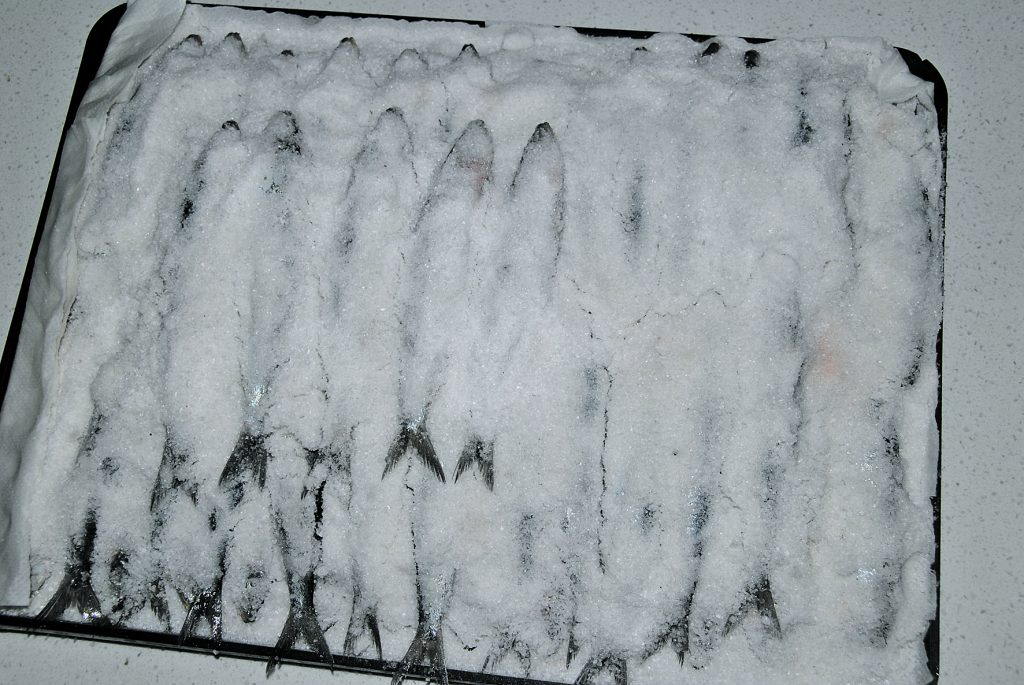 Badly damaged pilchards can be chopped into bait size pieces, either cubes or half pillies. Put a layer of salt in the bottom of a small container or clip seal bag and then place the pieces in. 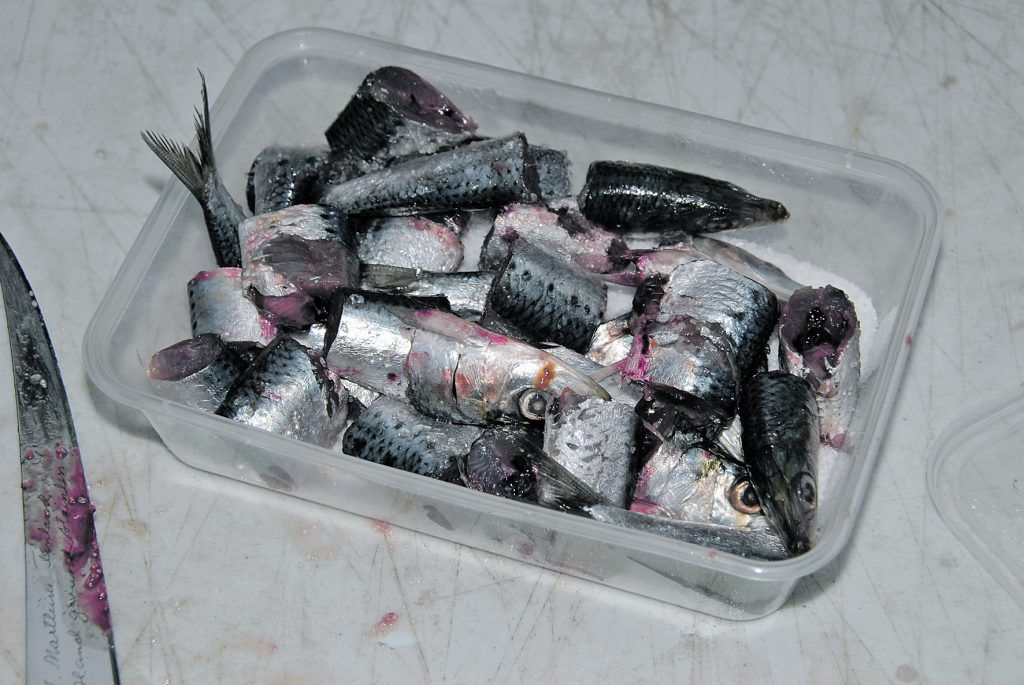 Fill the rest of the container or bag with salt, give it a shake to make sure all the pilchards are covered and then seal. Leave at room temperature for at least six hours and then put in the refrigerator or freezer. 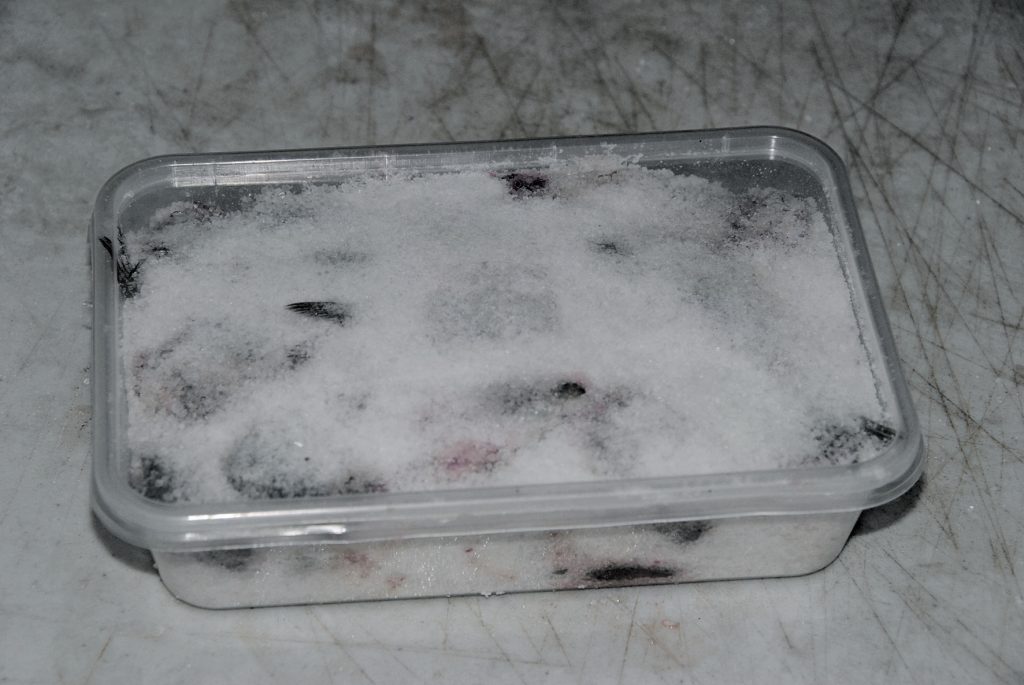 After the pilchards have been in the salt for at least six hours (preferably overnight), take them out and then layer them in a container or seal them in a clip seal bag or Cryovac. Leave the salt that is clinging to each pilchard on them. The longer they are in the salt, the firmer they will be and the longer they will last without cooling. If leaving them totally in salt in the clip seal container, drain off the excess juice after a few days. Your old soft pillies are once again prime baits that will last a long time with minimal or no cooling. 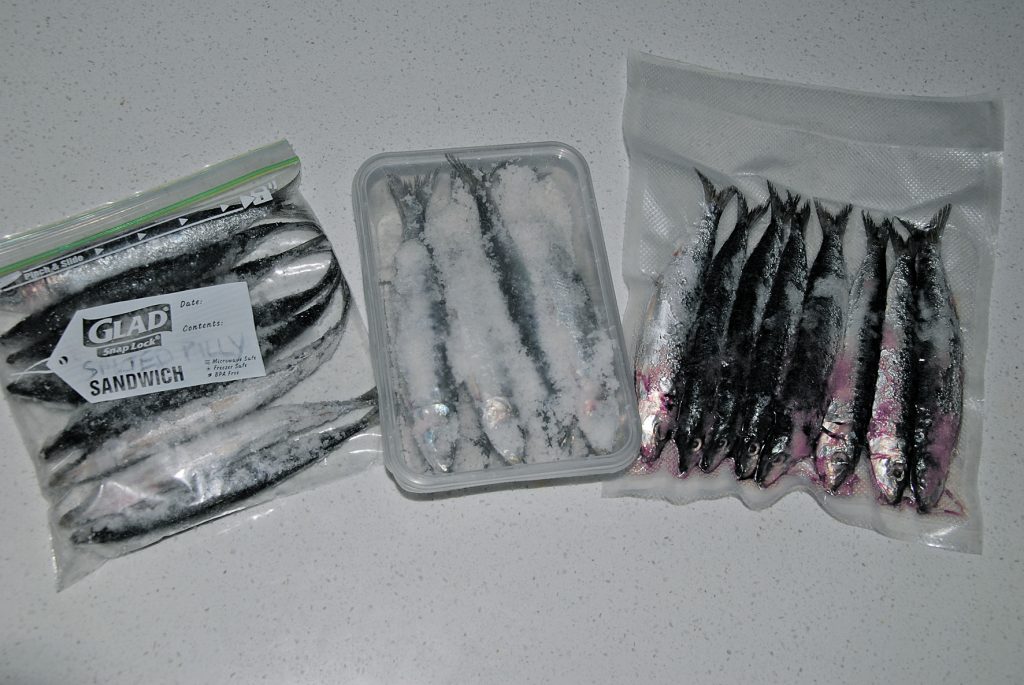 State vs state, mate vs mate, bait vs bait

by Rupe • I’m Rupe, my mate is Michael ‘Foxy’ Fox, and we’re both reps for Fishing Monthly. The only difference is that he’s a seasoned veteran from QLD and I’m a young whipper snapper […]

by Sean Thompson • Considered the holy grail by beach anglers, mulloway (‘jewfish’ or ‘jewies’ as they are affectionately known) are at the top of most beach anglers’ hit or bucket lists. Many anglers spend […]

Winter fishing in the South Burnett

by Matthew Langford • There’s nothing quite like waking up to a cold, frosty South Burnett winter. It can be quite hard to pull yourself away from those woollen blankets, but the anticipation of a […]