The cooler months are a great time to catch bream throughout Southern Queensland and even further afield. The larger specimens arrive en masse into the estuaries to breed. Savvy anglers take the opportunity to target them in the creeks, rivers, canals and even along the beaches during this period.

Bream are commonly scavengers and will accept a wide array of offerings most of the time. Although many quality baits are available from reputable bait suppliers, you can also manufacture your own dough bait, which will appeal to bream and numerous other species.

Bream can be exceptionally wary at times and will sometimes require a finesse approach to secure them on artificial offerings. Ultra-light lines, fluorocarbon leaders and skilled presentations are often prerequisites to be in with any chance at all. Although skilled anglers will be able to tempt them on hardbody minnows, blades, vibration baits, flies, soft plastics and a host of other offerings most of the time, those anglers with less experience can still score some great results on quality baits. These can include freshly caught offerings (live prawns, herring etc.) as well as quality frozen baits, with popular offerings being prawns, whitebait, pilchards, mullet gut and fowl gut. One bait which can be prepared at home from inexpensive ingredients, then stored in the fridge or freezer until needed, is a dough bait.

To make a good dough bait you don’t need a lavish list of ingredients. The basic dough is made with flour and water, and then you can make the recipe uniquely yours with your own list of additives. Different things that could be included are finely chopped leftover baits (those old soggy pilchards are ideal), cheese (strongly flavoured cheeses are best), tuna oil, Stimulate, canned sardines, minced raw chicken or meat and a host of other things. There are no rules! You may find yourself sticking to one recipe, or you might try a different combination of ingredients each time you make a dough bait. You can make a large batch and then split it into smaller amounts and either freeze it or refrigerate it for use at a later date.

Dough baits are extremely cheap to make, easy to store and they can really produce some quality bream as well as a long list of other species. As the bream pick at the dough, or the current breaks it up, it creates its own small berley trail that really gets the bream on the chew.

Let’s look at a basic recipe and how to put some dough bait on the hook to increase the chance of it staying on during repetitive bites.

STEP 1. Some of the basic ingredients that can be combined to produce a good dough bait. You’ll also need a knife, a chopping board and a mixing bowl. 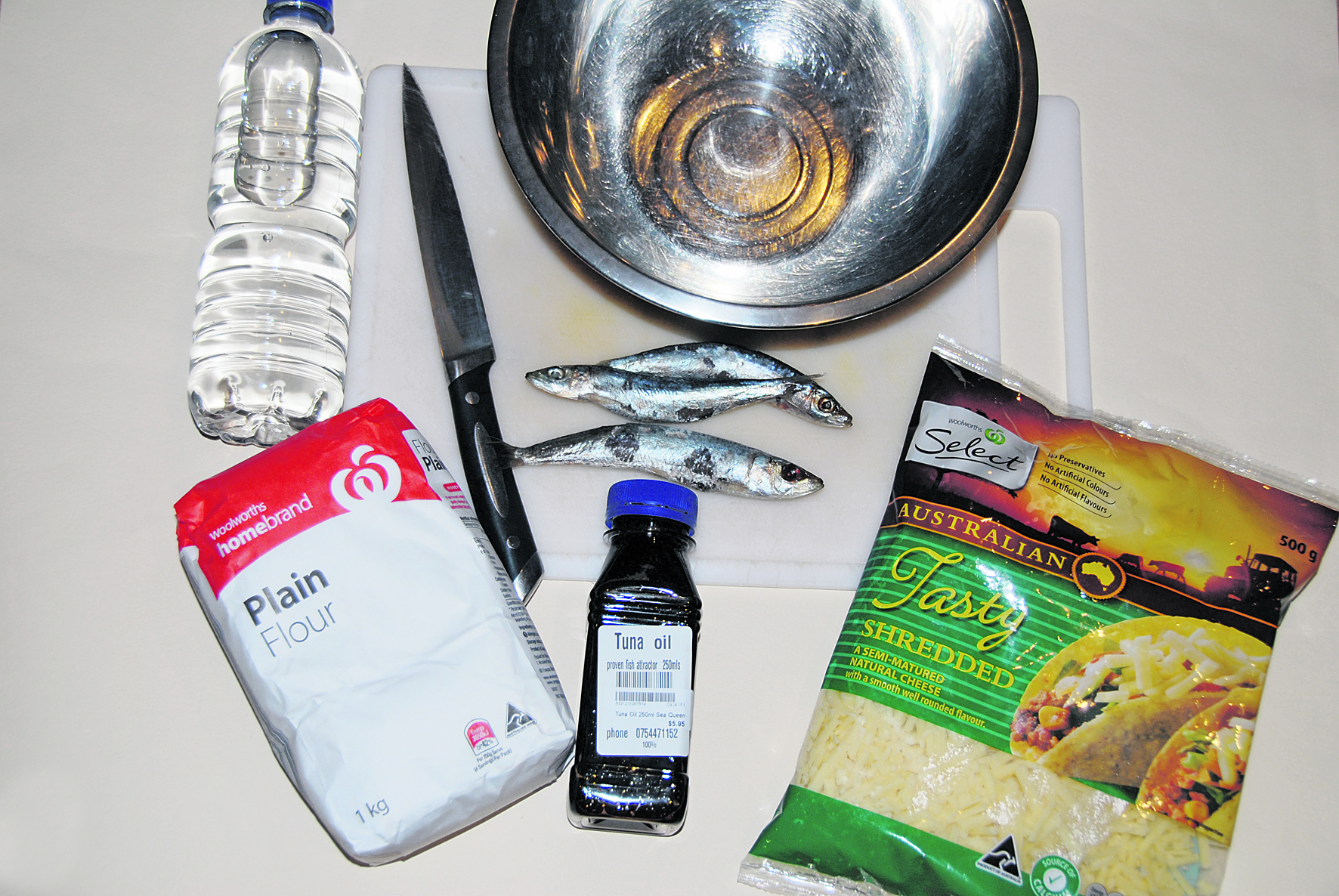 STEP 2. Old, previously defrosted, soggy pilchards are ideal for adding to your dough bait. These can be chopped up while still frozen if you wish. Remove and discard the heads and then chop the bodies into very fine pieces. 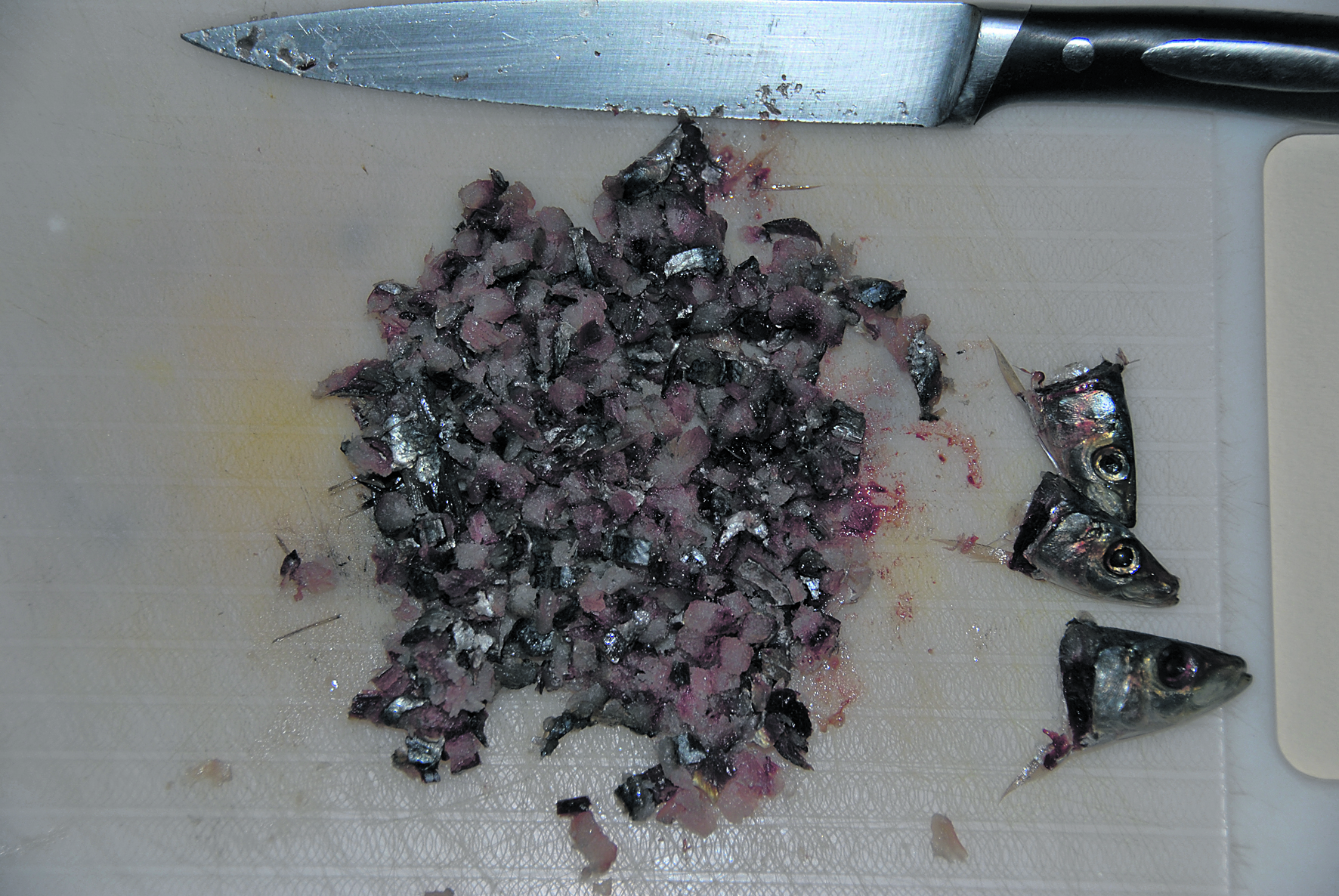 STEP 3. In your mixing bowl, combine the diced pilchards, cheese (grated or shaved), about a cup of plain flour and two or three tablespoons (or a generous splash) of tuna oil. 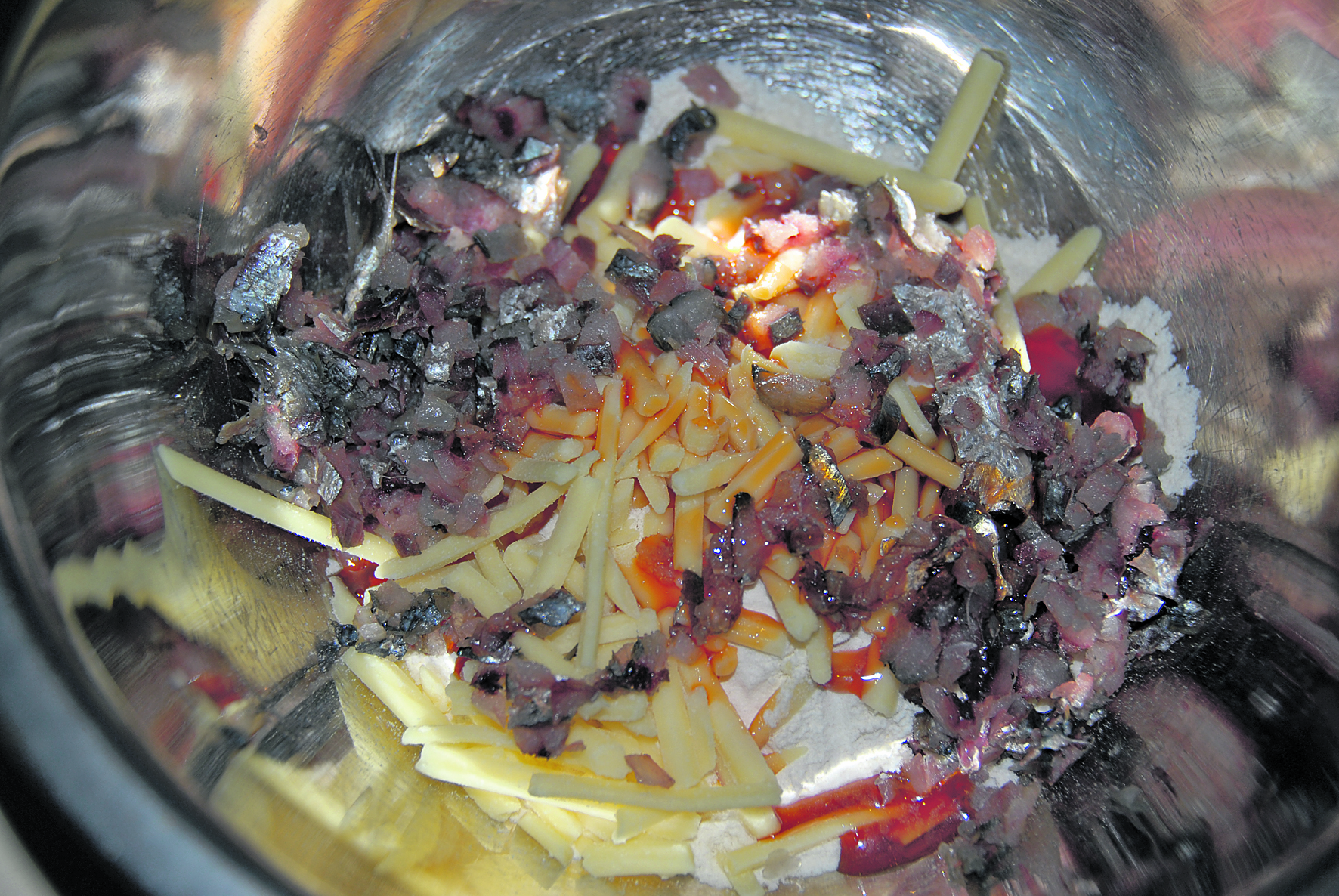 STEP 4. I like to don some rubber or latex gloves for the next step as the tuna oil smell will remain on your hands for days otherwise. Get your hands into the bowl to crush, mix and combine the nearly dry ingredients. This will also help to break the grated cheese into smaller bits. 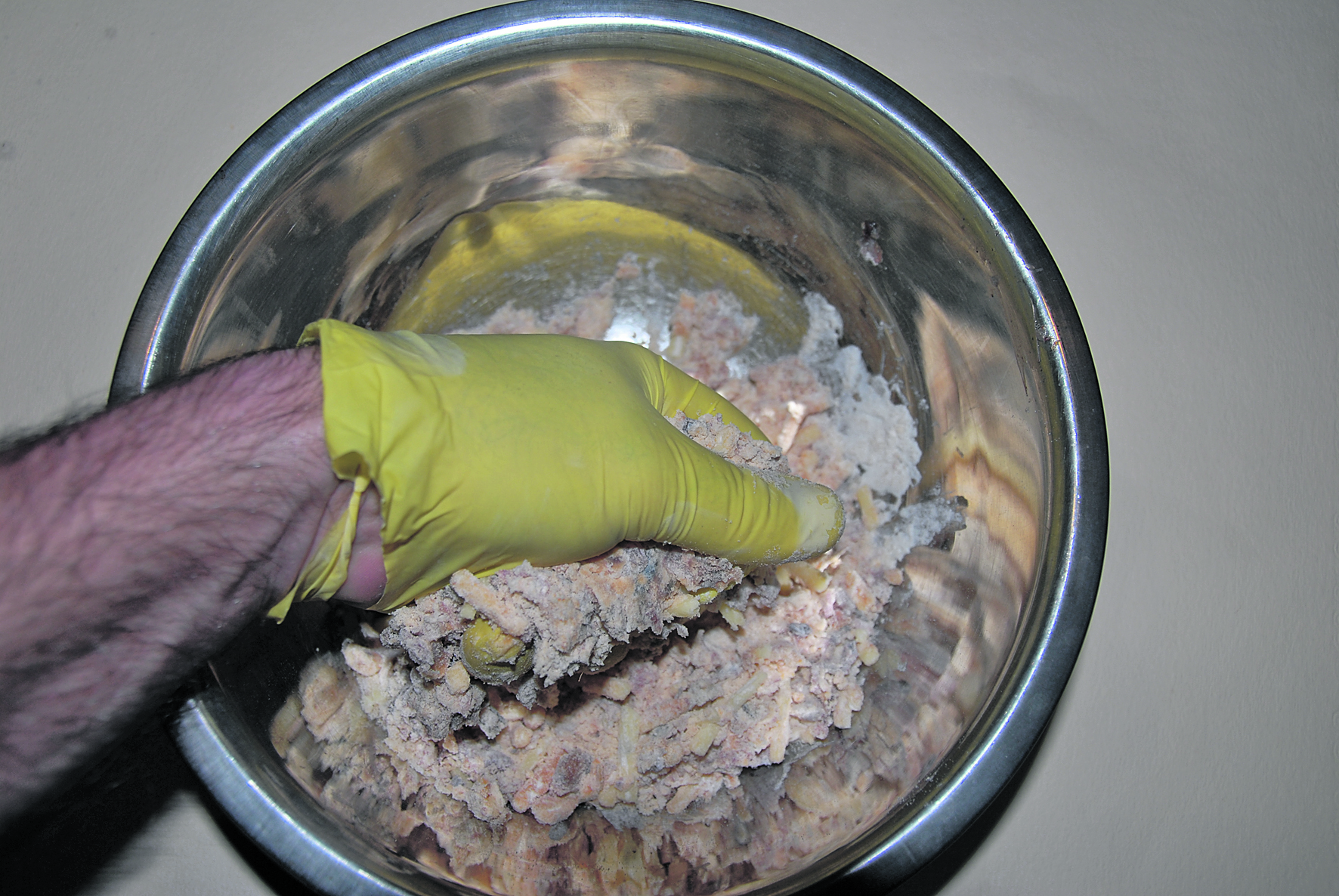 STEP 5. Add some water, a little at a time, and mix with the other ingredients until you produce a stiff dough mixture. 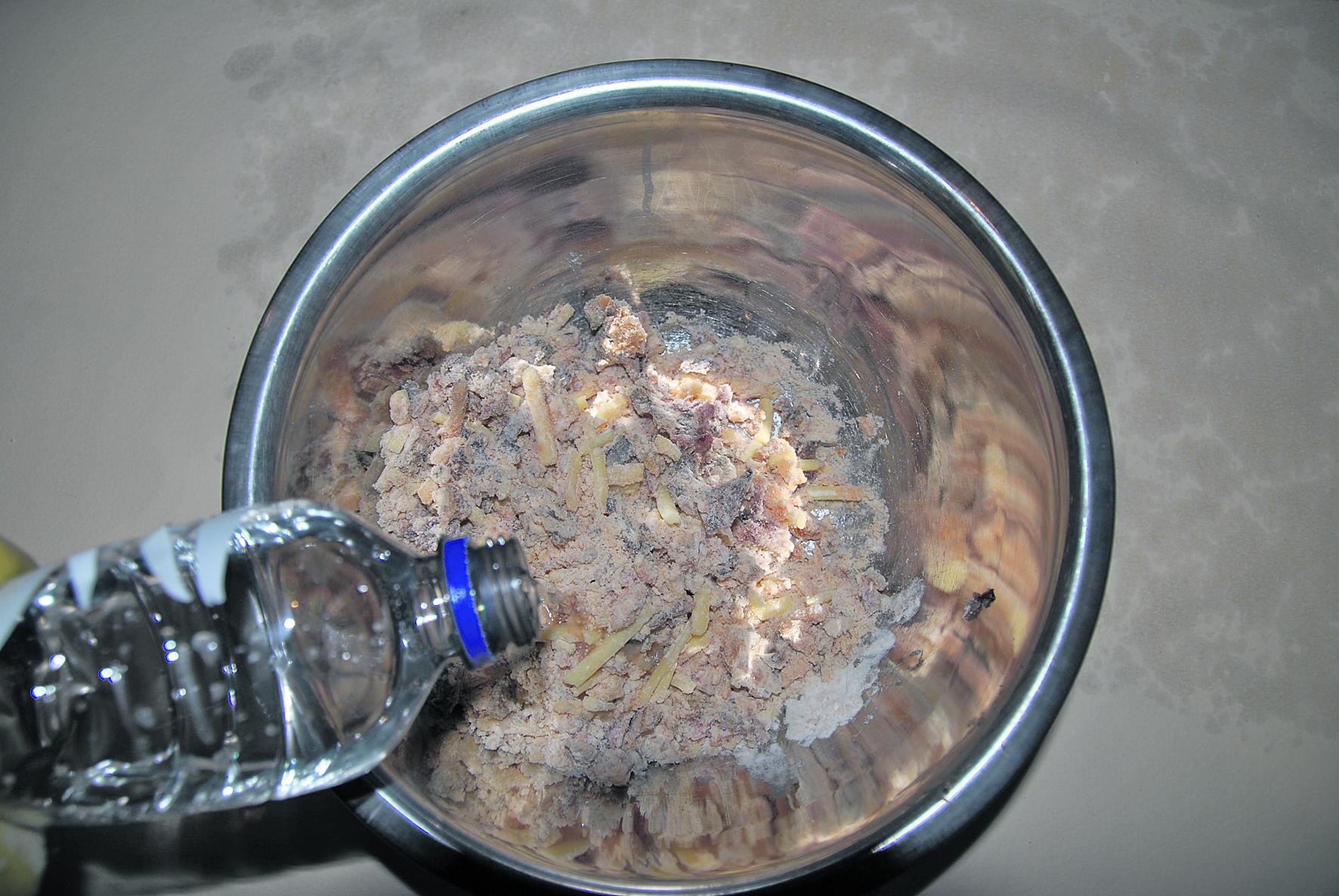 STEP 6. Continue squeezing the dough to compact and combine the ingredients. You’ll end up with a sticky dough which, when you pull on it, should be firm enough to be almost stretchy. If it’s too stiff or dry, add water. If it’s too soft or wet, add flour. 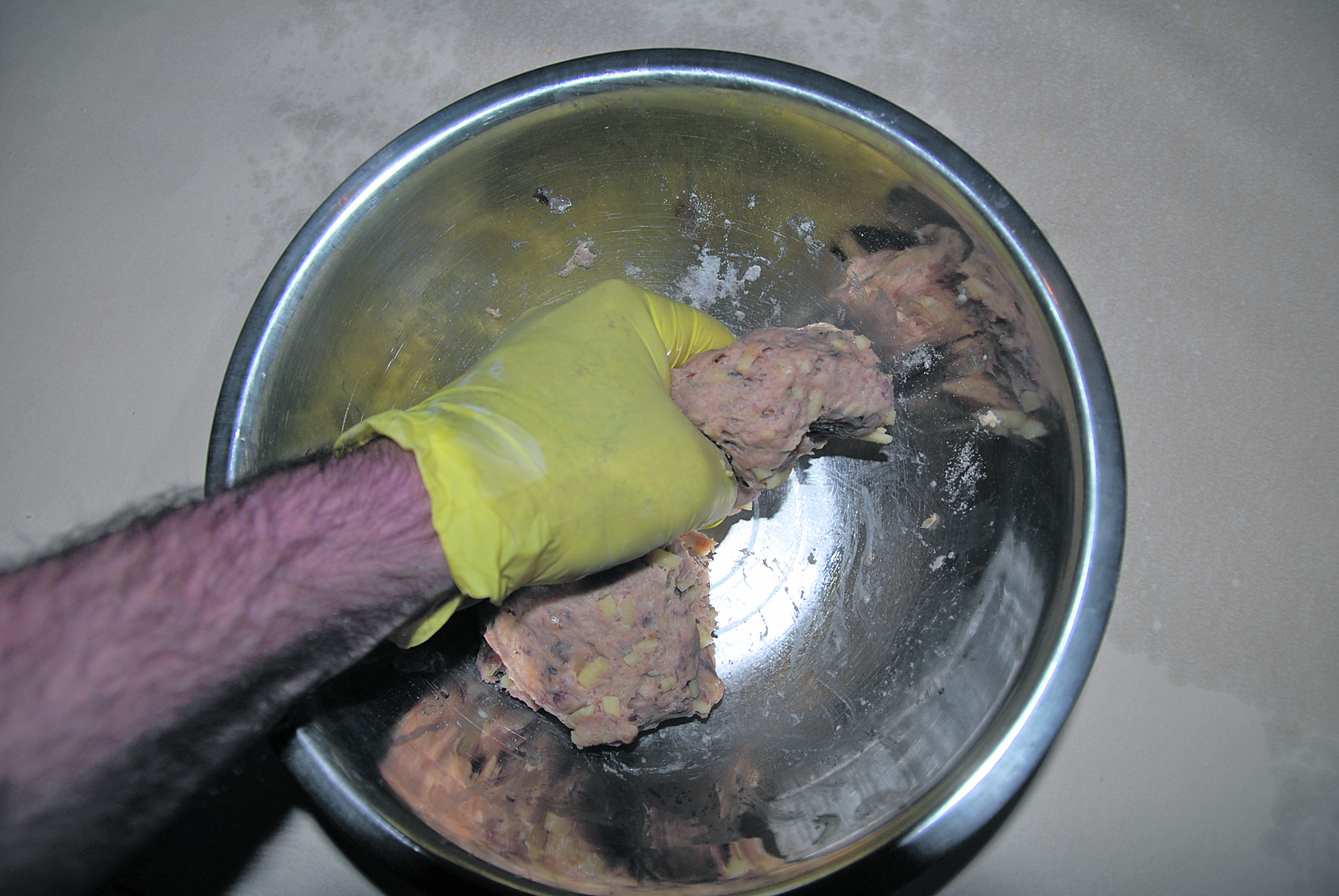 STEP 7. Your mix should be fairly even with pilchard pieces visible evenly throughout the dough. Your dough is now ready and can be divided into smaller portions to be stored in the fridge or freezer, if you wish. 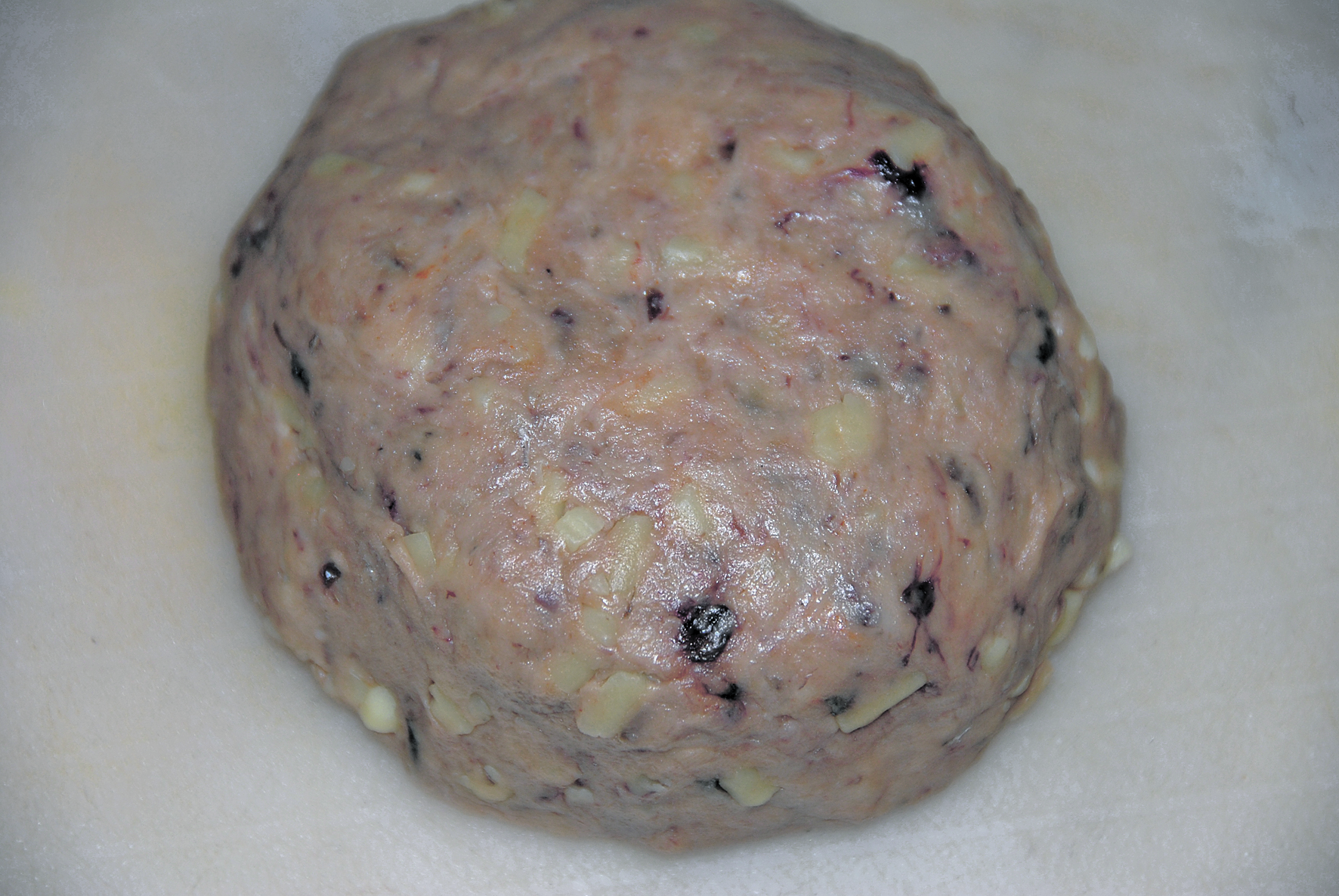 STEP 8. When tying on your hook, use a loop knot, perfection loop or Lefty’s Loop (all pretty much the same) so that you have a loop above the hook that’s just large enough to poke your little finger through. I have used braid for this demonstration to make it easier to see, but I’d recommend a fluorocarbon leader between 6lb and 12lb. 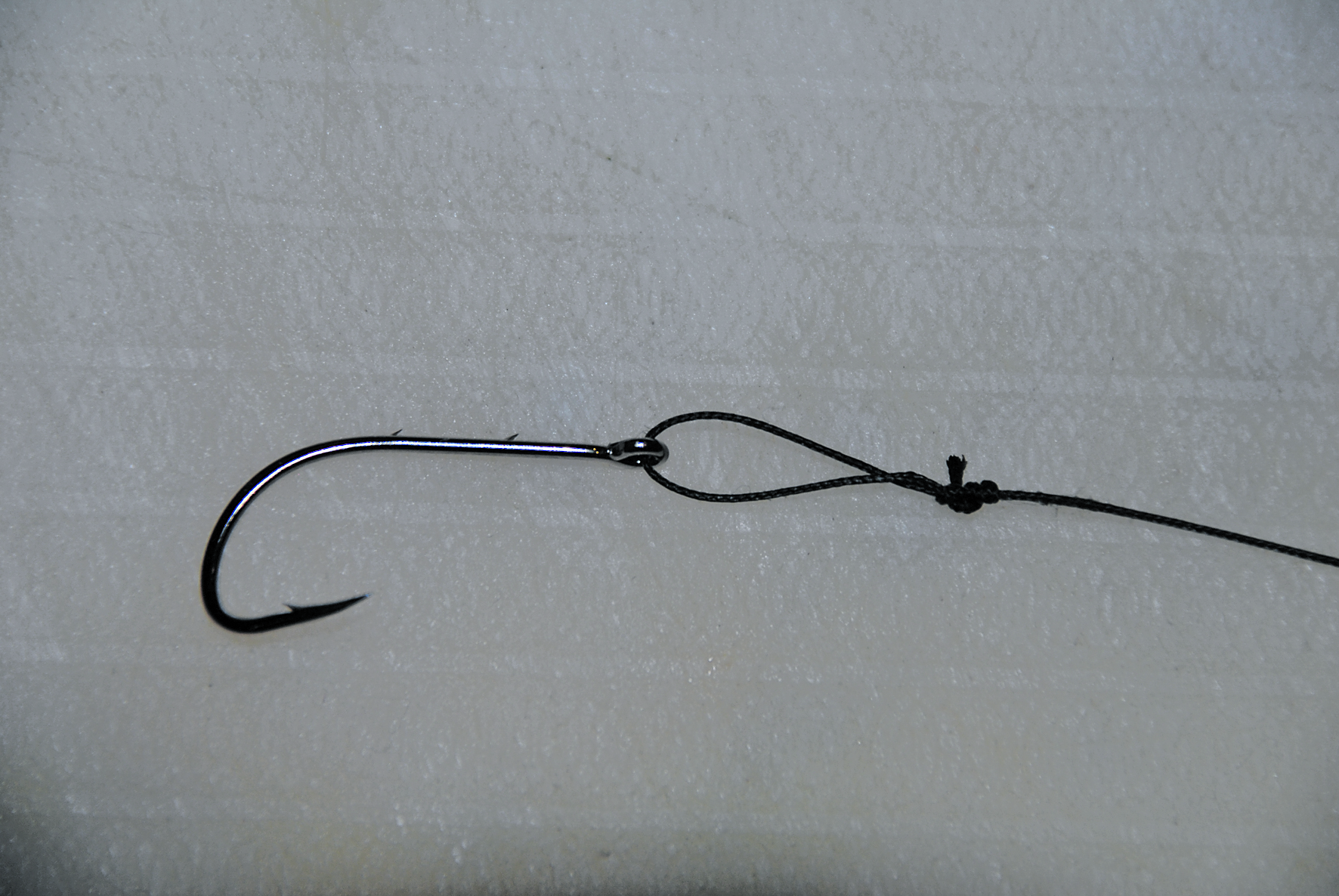 STEP 9. Roll a small piece of dough into a log roughly as thick as a pencil and 3-5cm long (will depend on the size of the hook you are using). Pass the dough log through the loop knot until the hook is in the middle. 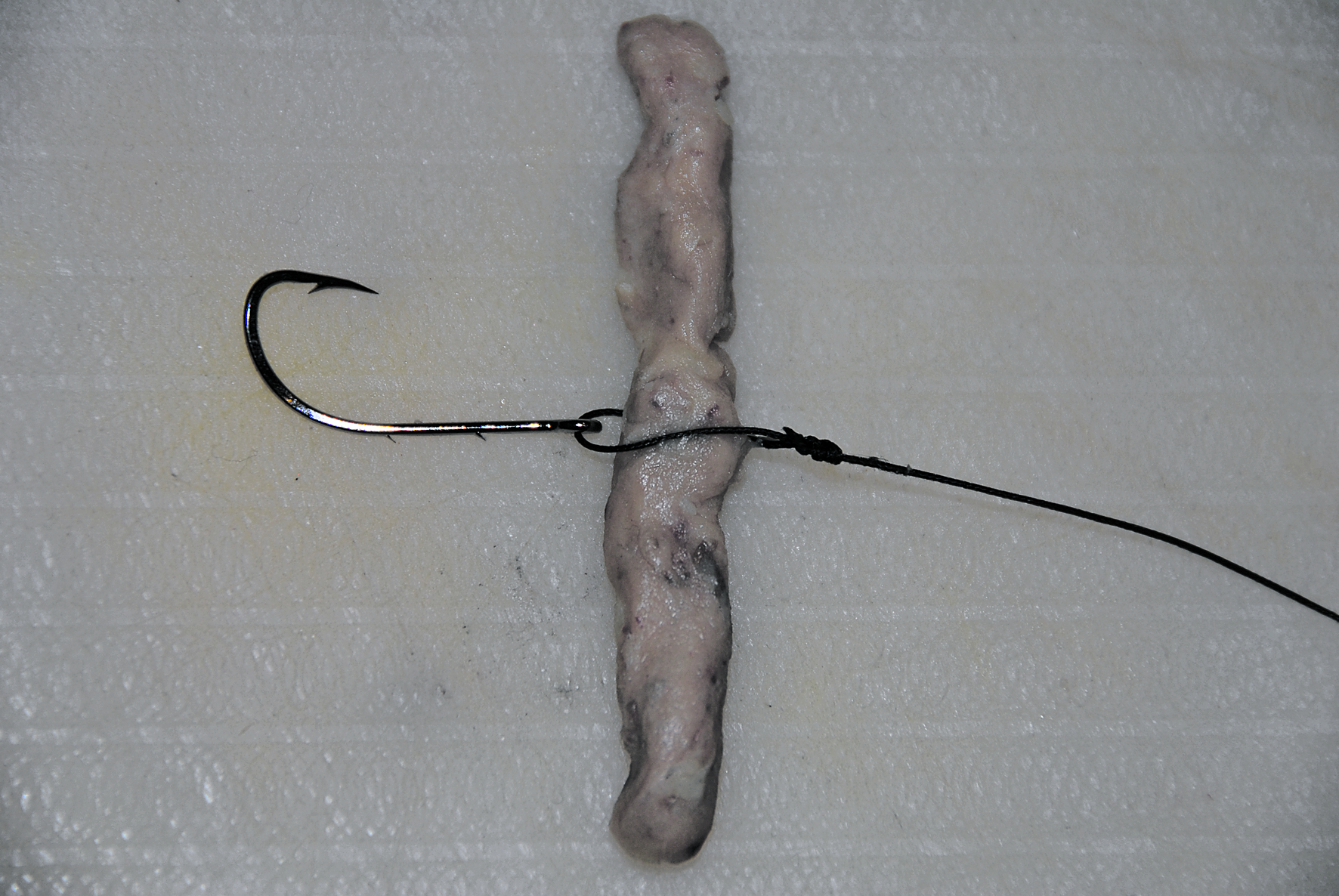 STEP 10. Roll the dough down over the hook and mould it evenly around the shank. Ensure the hook point is protruding from the dough and is just a little longer than the hook as shown. You are now ready to catch some big tasty bream with your own dough bait. 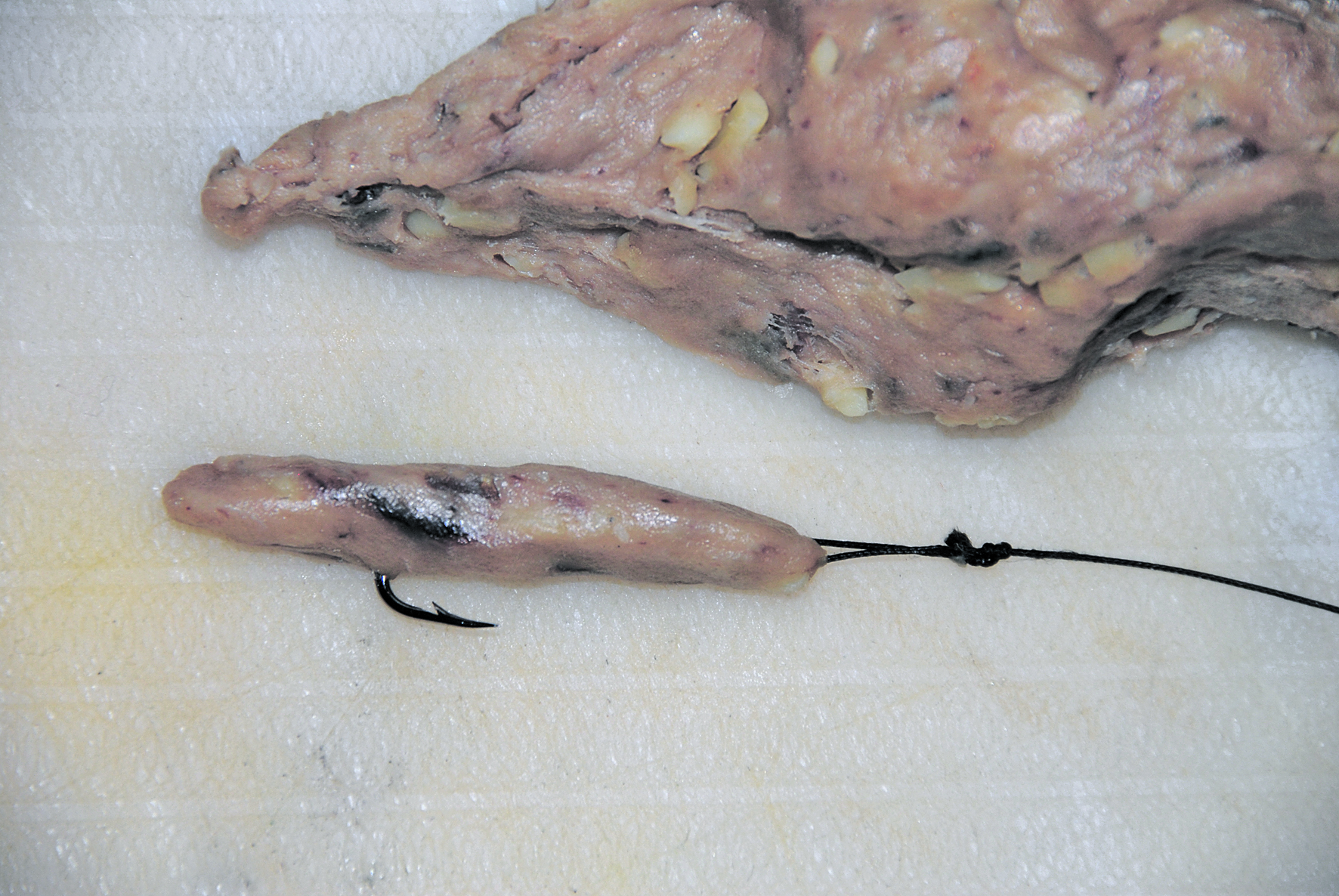 Back to Basics: Avoiding the ramp rage

by Steve ‘Starlo’ Starling • When it comes to boat launching and recovery, prior preparation prevents poor performance! Most boaties have a collection of stories detailing incidences of poor boat ramp etiquette. Sadly, many of […]