When fishing soft plastics through heavy structure, anglers have adopted numerous methods to ensure they have a reliable rig to hook their quarry while still being able to work their offering productively through weed beds, mangrove snags, rock walls and other cover.

There are varied ways to rig your weedless offerings. Over the years many anglers have developed or adopted their own version of the basic weedless rig that they are confident with for the species they target. In this article, I will demonstrate a few of the weedless rigging options for shads and other plastics, which may prove useful for your applications.

I have used weedless rigging for some of my plastics for over a decade now but had never been confident with my rig until a few years ago. I suppose the array of plastics available in the early years was fairly limited, and many, especially the shads, had solid bodies. I wasn’t comfortable with the hook up rate when rigging these on worm hooks as the fish had to hit the plastic exceptionally hard for the bend of the hook to push through the plastic far enough to provide enough open gape for a solid purchase. And this all had to happen in a split second with most species as they would eject the plastic as fast as they had engulfed it. Additionally, many of the worm hooks available were only of a light wire construction and not suitable for most of our tough Aussie sportfish.

Over the last decade, there has been an enormous array of quality plastics and worm hooks entering the country. Many of these have slits in the belly or hollow bellies and additional recesses in the back, which has made them softer and more suitable for rigging with worm hooks. When using these plastics, the initial hit of the fish is easily sufficient to push the hook point proud of the body to promote a positive hook set. This is especially important for anglers targeting impoundment and saltwater barra, which have a hit and spit habit. The hook point needs to be prominent and driven home in a split second before the fish has ejected the plastic.

Berkley Hollow Bellies, Castaic Jerky-J, Squidgy Slick Rigs and a host of other early offerings were soft enough to be fished with worm hooks. In recent times there has been a number of shads from Z-man, Keitech, Jackall Brothers, Fish Arrow and others which will work well with worm hooks and weedless rigging. I have used most of these, finding certain ones better for some species and situations than others, yet all are great products.

One of the problems with worm hooks has always been keeping the plastic rigged straight on the hook. With repetitive casting and short or tentative strikes, the plastic has a tendency to pull down on the hook, making it curved, which results in it spinning throughout the rest of the retrieve. This is especially frustrating as you never get that second hit and can even spook fish, therefore a future cast is ignored. Keeping plastics straight on the hook, even with a quite aggressive tail strike will greatly increase your chances of getting a more aggressive second strike and subsequent solid hook up.

Let’s initially look at rigging a shad style plastic with a worm hook and then two different methods to keep it straight on the hook. We will use one of the popular TT Snakehead Rigs for this demonstration, however the rigging will be the same for most good worm hooks whether they are weighted or not.

Although it may not look pretty, this rigging method offers exceptional durability and means that you will get the best out of your plastics whilst being able to fish them deep in heavy structure, which is often where some of the better quality fish will reside. From here it is up to you to extract them. Good luck with that!

Step 1
Pass the hook point through the centre of the nose and protrude it out just under the chin of the plastic. Slide the plastic along the shank until it sits on the kink in the shank just behind the eye.

Step 2
Flip the plastic around so it is sitting as shown on the hook. By laying the hook bend next to the body you will be able to work out at what point it needs to penetrate through the back of the plastic in the next step.

Step 5
To avoid this, there are a couple of additions that can be made to the rig. The first utilises Bait Buttons (also distributed by Tackle Tactics), which are small rubber disks in a handy dispenser. Go back to Step 2 of the rigging to put these on. Put the hook point in the slot and push downwards so the point penetrates the disk. A small rubber lumo bead or similar rubber or plastic disk could also be used. 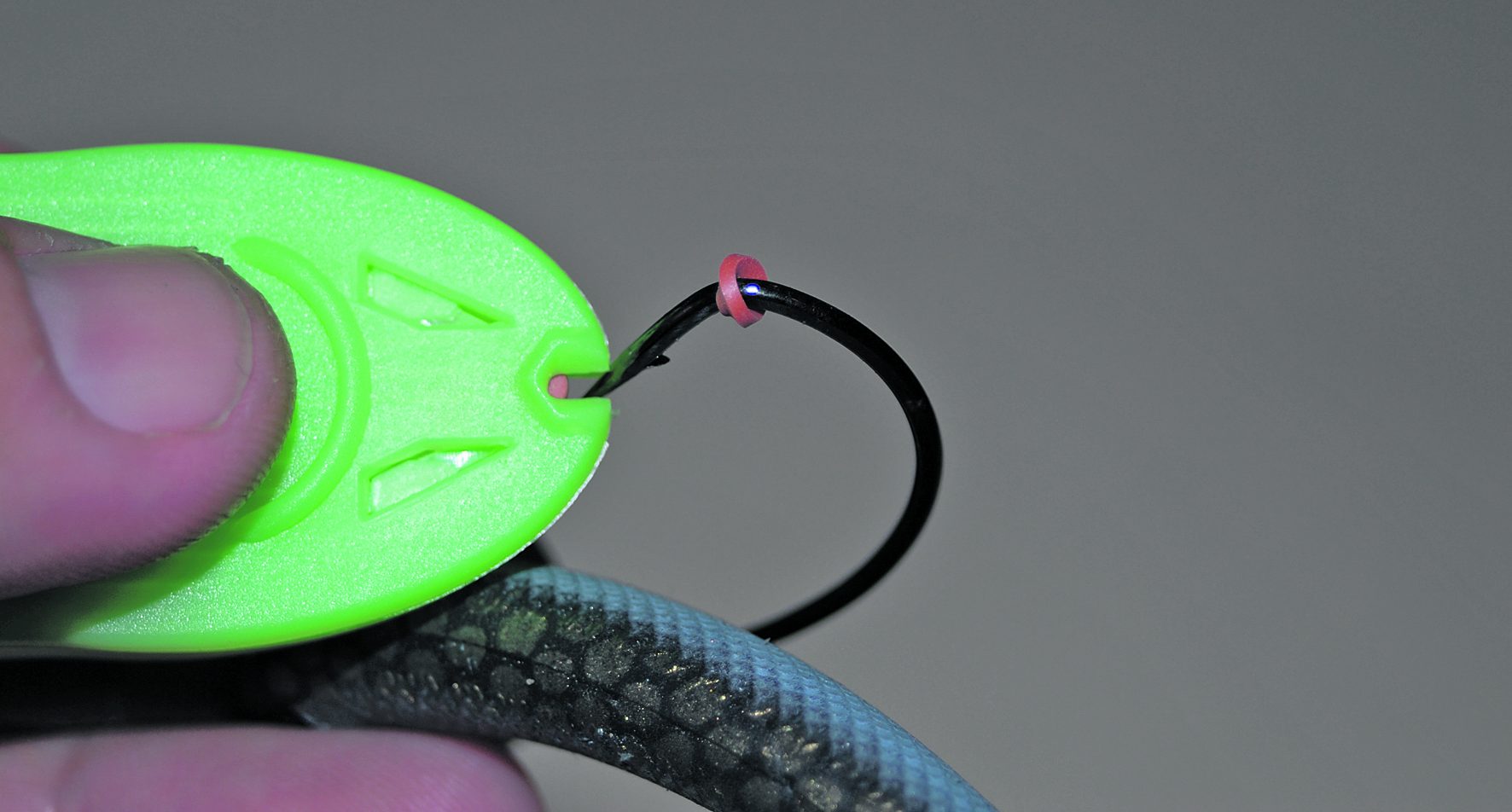 Step 6
Slide this along the hook shank until it is hard up against the chin of the plastic as shown. Then continue with Step 3 of the rigging. This will help to hold the plastic in place but a savage tail strike may still pull it backwards on the shank. For barra fishing some years ago (before Bait Buttons were readily available) I began using a different method. 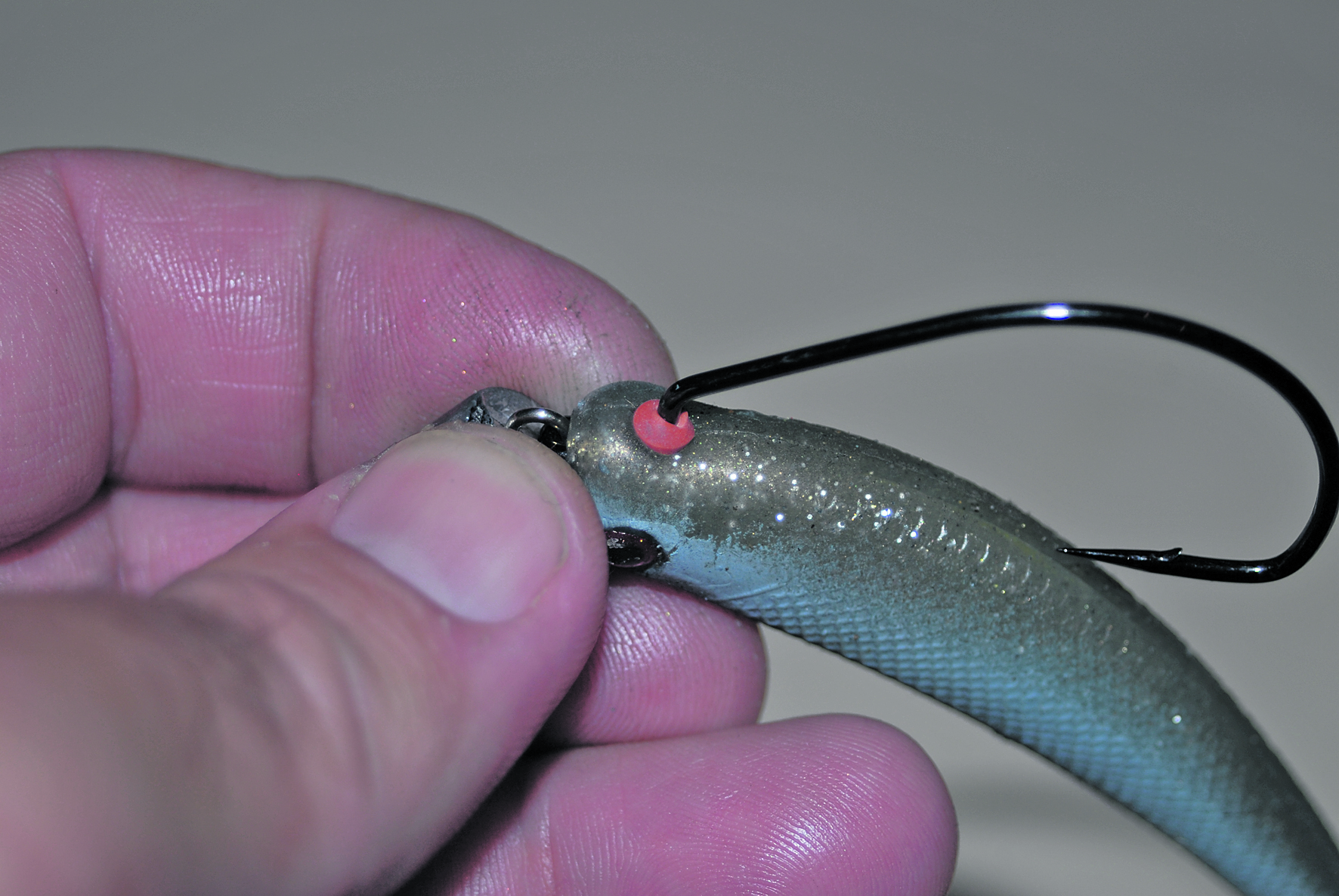 Step 7
Once the plastic is fully rigged on the hook, get some thin tie wire about 5cm long. I initially pulled the wire out of some plastic bag twist-ties but have also used florist wire for this. Pass the wire through the eye of the hook (not the eyelet on the lead head) and then secure by wrapping it back around itself a few times. 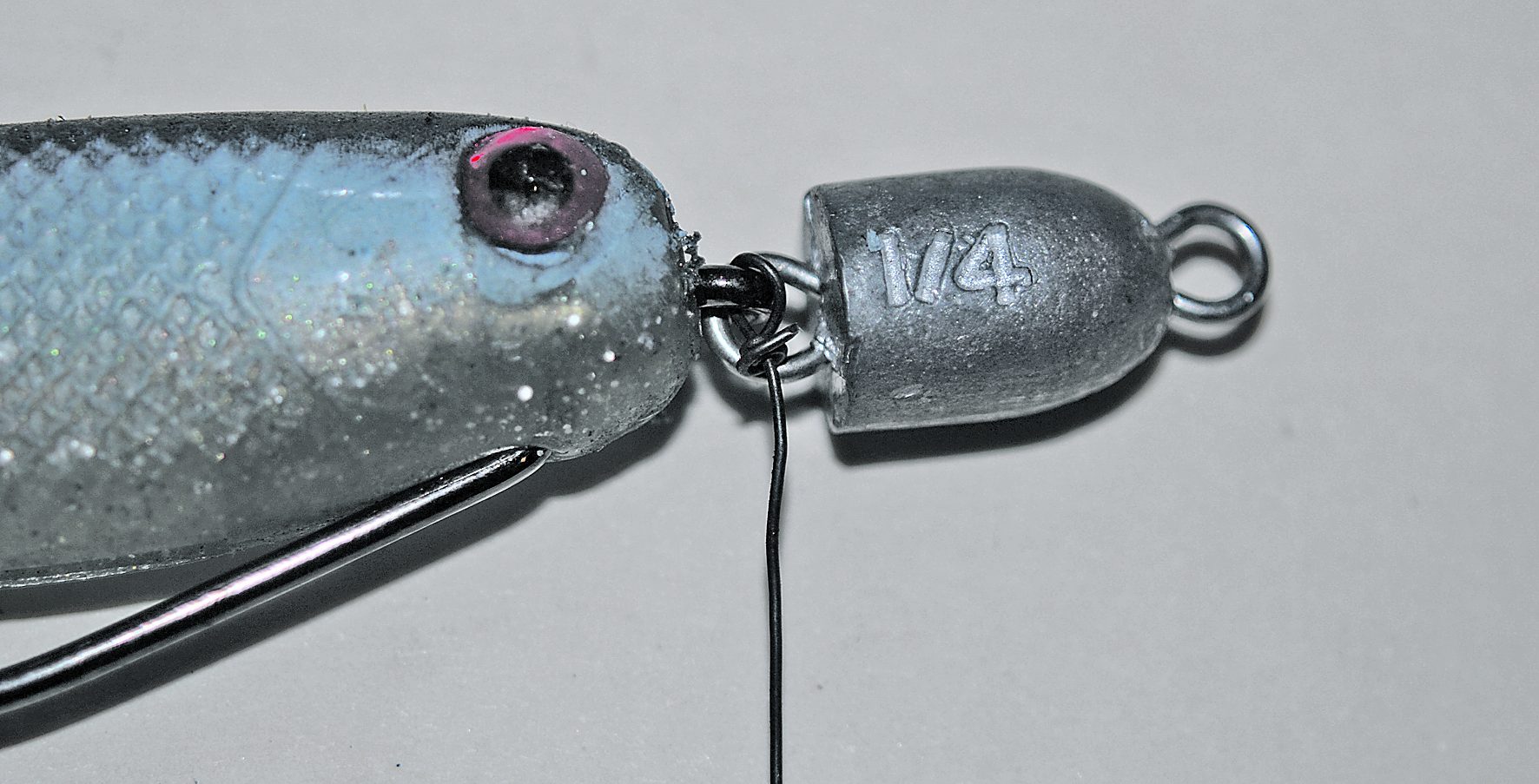 Step 8
Pass the wire past the chin of the plastic and then wrap around the hook shank a few times as shown. It is extremely difficult to pull the plastic back along the hook shank and the plastic actually has to totally be torn off the hook to remove it. Z-man plastics offer an exceptionally tough rig when used like this. However it is still easy to change plastics by untwisting the wire, putting on a new offering and then re-twisting the wire around the shank.

by Daniel Turner • I’ve always loved surface fishing. It started with summer redfin on poppers and eventually progressed to chasing Murray cod on the biggest surface lures I could get my hands on. Watching […]

by Jamison Godfrey • ﻿ Flathead would have to be the fish that most people have caught at some stage or another; luckily they are a fantastic table fish also with plenty of ways to […]