We decided to drop the AQUA II into the heavily-timbered Hinze Dam in South East Queensland, opting for an early start so we could really test out its fishing ability!

Unloading the yak from the 4WD and walking 100 or so metres to the water, I was surprised at just how light this two-person craft was. At 32kg, it’s not too heavy to lift on and off by yourself, however being a tandem craft, its assumed you’ll have someone else there with you to help.

When loading my gear into the AQUA, I noticed that the vertical rod holders at the rear actually angled inward, as opposed to sticking outwards like with other kayaks. I actually came to really appreciate this small but clever little design, as it serves to protect any rod tips at the rear, and this is a big plus in a timbered graveyard like Hinze!

As for storage, there are two small hatches, one for each seat. There’s space enough for keys, a phone, spare trace, clippers and other small bits of kit that you’d want to keep dry. Admittedly, there wasn’t a lot of storage space available, however both of us had no trouble with a tackle box each and a few hand tools, and that’s about all I would tend to take kayaking anyway. You can opt to have large front and rear storage hatches fitted on the AQUA II. 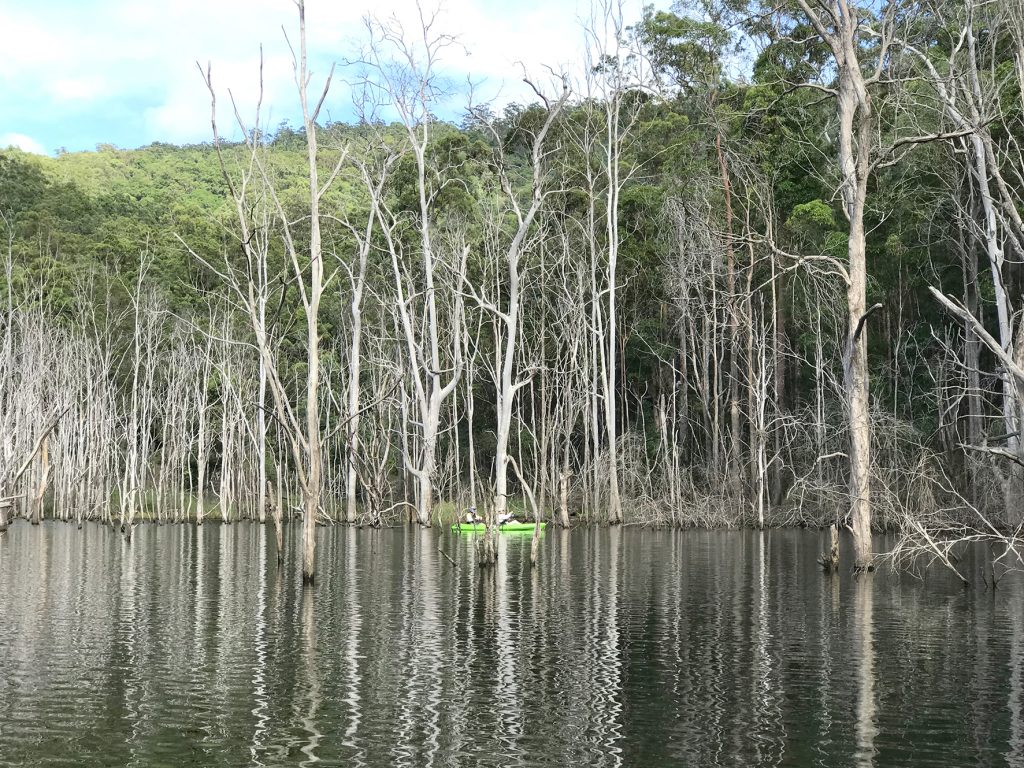 Kampey and the author had no trouble getting right up the back of some of the arms in search of saratoga. 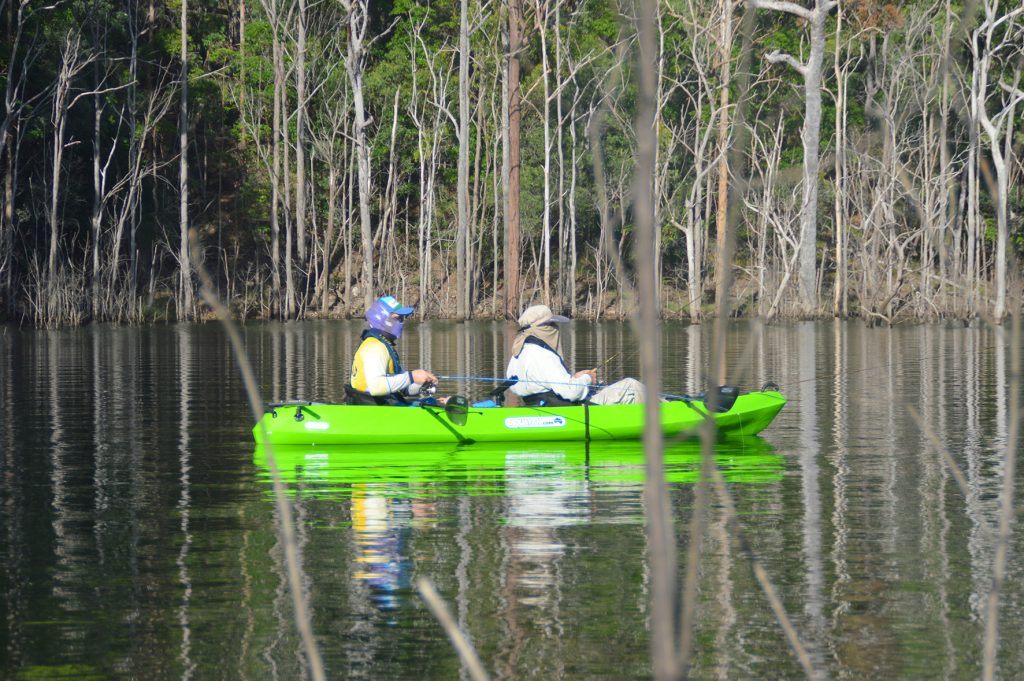 Slinking through Hinze’s heavily-timbered shoreline was no dramas for the AQUA II. 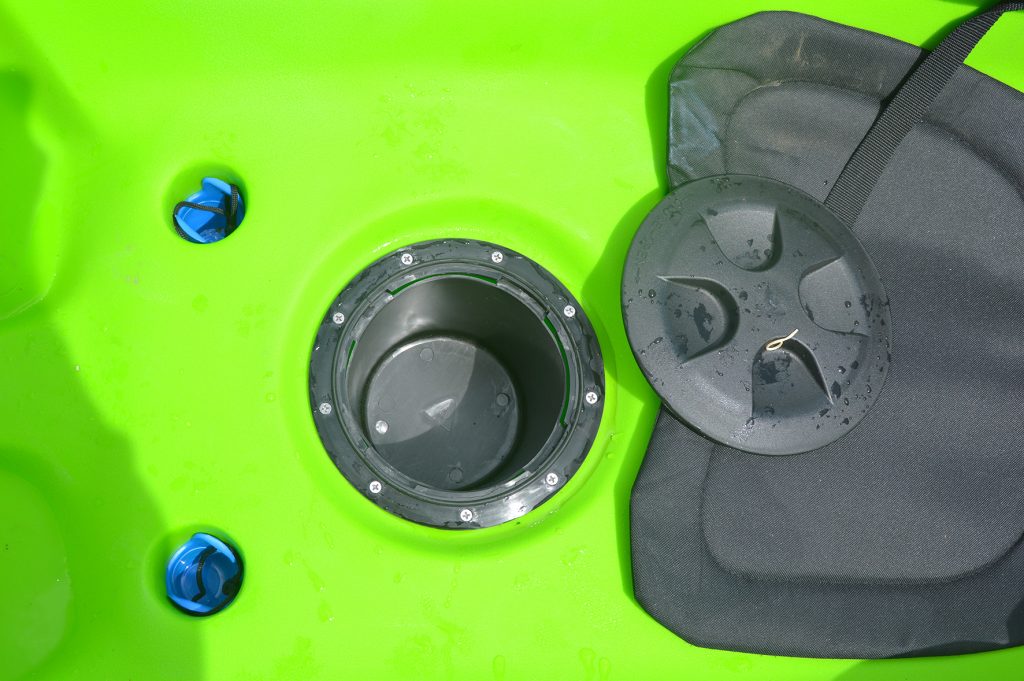 The small storage hatches that come with the package provide enough room for phones, keys, small tools and the like. 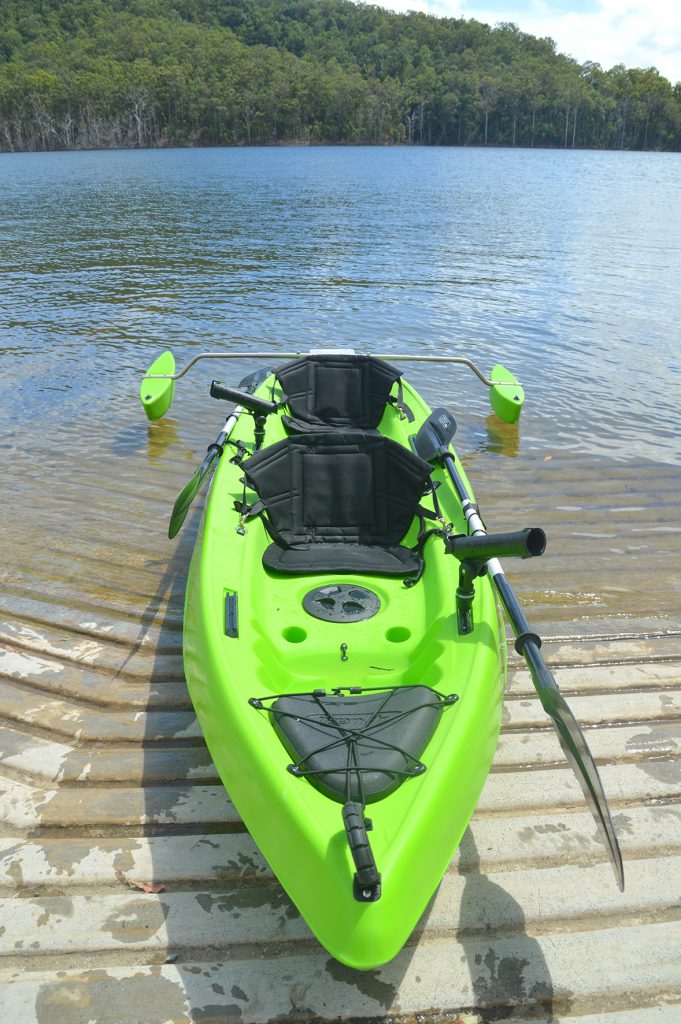 With everything fitted, the AQUA II with the Outrigger Kit fitted looked like a serious fishing machine. 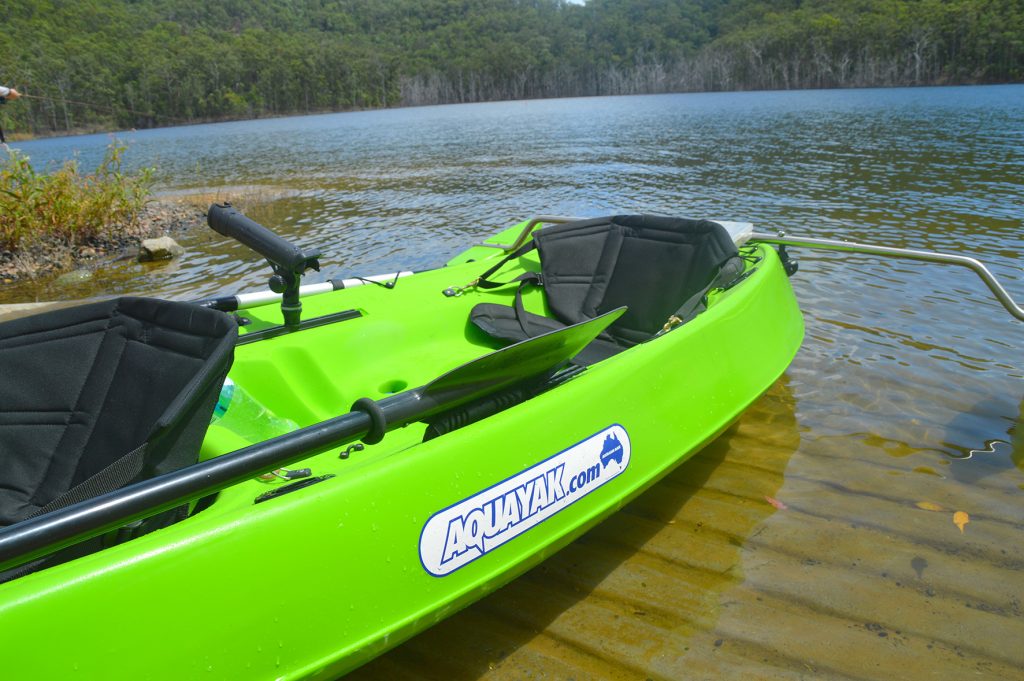 The deep moulded seats made the kayak extremely stable for two users. 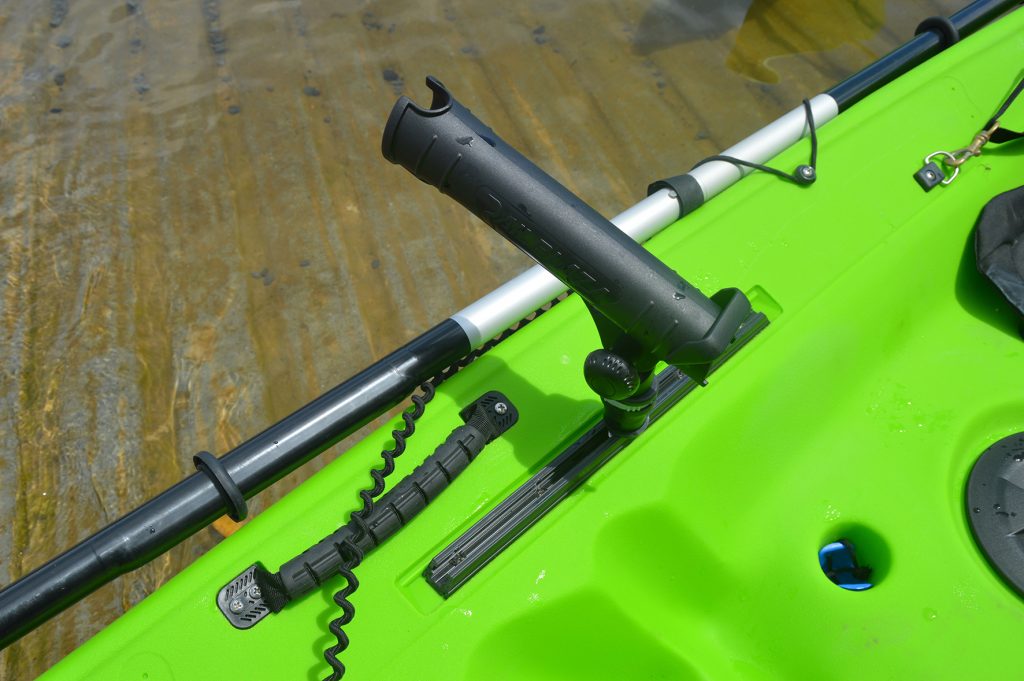 The Railblaza rodholders that come with the package can be mounted and unmounted in a matter of seconds. 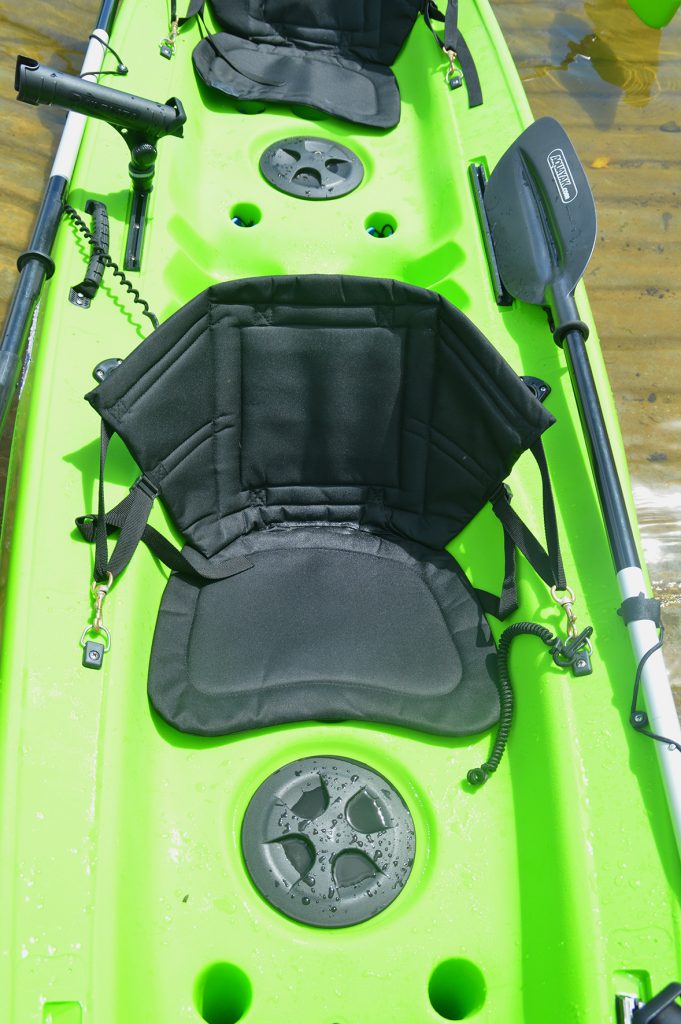 The comfort seats that come standard with the package didn’t cause any dramas for the rickety backs of Kampey or the author on the day. 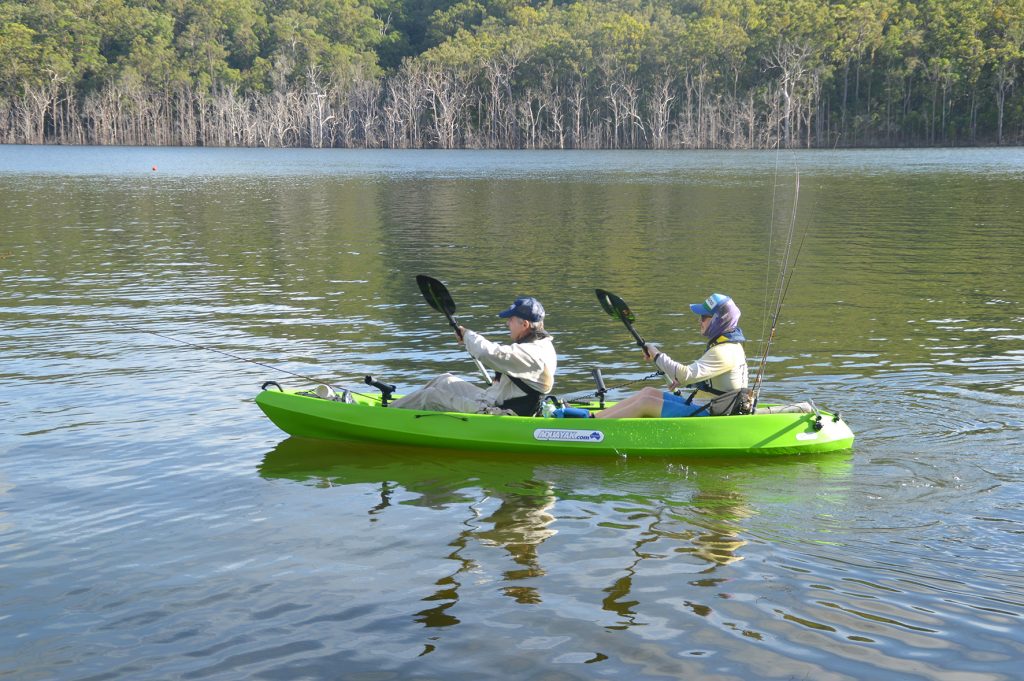 With two people paddling the relatively light 32kg hydrodynamic frame, it’s possible to get this kayak up to a fair clip. 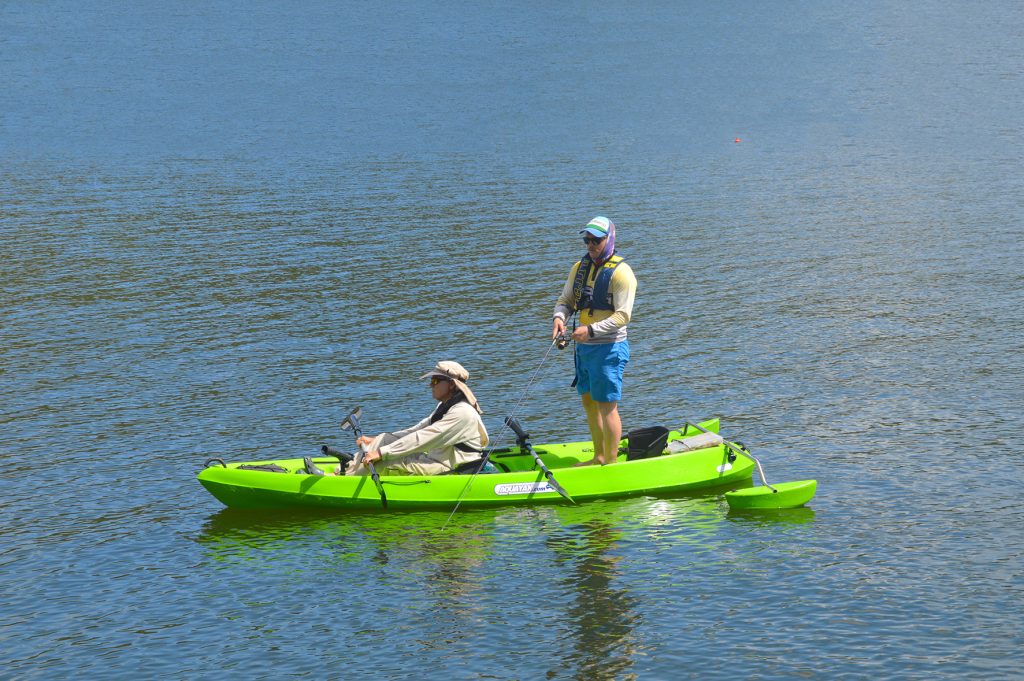 The AQUA II with the Outrigger Kit fitted and someone to paddle you around is as good as fishing out of any electric bass boat.

Getting in ended up being very easy – it certainly is nice to have someone there to hold the kayak steady when you get in, as Kampey found out!

What stuck me immediately was how easily this kayak manoeuvred, and tight corners were no trouble at all as we did some passes for the camera. When the paddles came out of the water, the AQUA II was able to glide gracefully forward without veering to one side, eliminating the need for any complicated rudder systems. The deep moulded seats made for a very stable ride, and the standard comfort seats that the AQUA II comes with didn’t bring about any dramas for my weathered back, and I didn’t hear any complaint from up front either!

Slinking through Hinze’s drowned timber with the 3.8m AQUA II was all too easy, and the advantage of a two-person kayak is that one person can hold the kayak in position while the other really works an area over. This is exactly what we ended up doing, as there was a stiff breeze blowing across the dam, which would have made fishing out of a single-person craft difficult.

Our short day on the water at Hinze proved fruitless on the fishing front, however our photographer for the day Peter Jung, who was also in an Aquayak kayak, managed to sneak off and nail a decent saratoga!

One slight flaw I did find was that if you’re fishing out of the rear seat, it’s difficult to put your rod in your lap while you paddle along to the next likely spot, which anglers tend to do in a single-person kayak. When sitting up front, this isn’t an issue, however the front seat prevents the rear angler from being able to put his or her rod down, as sticking it out to the side would inhibit your own paddling. I eventually worked out that the easiest thing to do was point the rod backwards and put the rod butt in my lap under the paddle – a small price to pay for extremely comfortable kayak fishing.

Aquayak’s range features a device that is fantastic for anyone who wants to make this incredibly stable craft virtually untippable. This would be very handy if lugging lots of equipment while camping and fishing, kayaking in rough water and also if you’re not the most experienced kayaker.

Once the Outrigger Kit was fitted to the AQUA II, I decided to try standing and fishing, and this was all too easy, even with my fairly ordinary equilibrium. I found that standing and fishing while a seated user paddles you around is as good as fishing from any boat with an electric motor! You just need to find someone who will do that for you…

Attaching the kit takes about five minutes, and I’m told you can fit it to any kayak, not just those in the Aquayak range! Despite the fact that they protrude outward, they didn’t seem to affect the kayak’s performance. I did bump them a few times with my paddle on the stroke while sitting in the back, but this is probably more a reflection of my paddling ability, and a bit of practise would probably fix this problem.

All up, I see this as a fantastic package for a few reasons. Firstly, it’s cheaper than buying two good quality fishing kayaks, and is perfect for regular fishing partners. It would also be easy enough to fish out of alone should your partner be unavailable that day.

Secondly, with the Outrigger Kit, it becomes user-friendly to even the most novice kayakers, and provides comfort to more skilled users if traveling in rough water or with a heavy load.

Thirdly, it can be kitted how you please, with Aquayak’s huge range of optional accessories, which include seats, rod holders, extra hatches and more.

All up, the standard AQUA II package, which includes two seats, two paddles, two 12L dry bags, and a handful of extras, is $1050. The Outrigger Kit, which is sold separately, is a modest $245, and believe me, these things will last a very long time.

For more information on this kayak, and the other kayaks and accessories in the range, visit www.aquayak.com

by Alex Bellissimo • I spend just as much time rock fishing as beach fishing, but there’s something particularly special about fishing the ocean beaches. You’re right amongst the waves and wind, up close and […]

by Toby Grundy • In March 2019, I wrote an article for this magazine centred on targeting flathead with spin gear using a retrieve called ‘staccato’ which commonly used by fly anglers. I caught a […]