Since the dawn of time, there’s been a conundrum about which rig is the right one to use when targeting snapper throughout Victoria. Unlike many other states where snapper are caught, Victoria’s snapper fishery is very unique. Two major waterways, vastly different from one another, require two different fishing techniques. Port Phillip Bay may be affected by tidal pressure in its lower regions like the entirety of Western Port, but Port Phillip Bay’s somewhat tidal section sees very few snapper caught in season.

Draw a line on a map from Mount Martha on the eastern side of the bay to St Leonards on the western side – most snapper caught in Port Phillip Bay come from north of this line, pure snapper territory. Throughout this 1,900 square kilometre waterway, it’s common for anglers to fish with almost unweighted baits. Just a stone’s throw away in Western Port, the intense turbulent water pressure causes anglers to use weights up to 20oz+ just to hold bottom and keep baits within range of a hungry red.

Even more mind boggling is that within the space of using unweighted baits in Port Phillip Bay to heavily weighted paternoster rigs and running sinker rigs in Western Port, there are also many variations that can be used – some with a fair thought process to back them up.

Of all the rigs and their variations, the paternoster rig is the only one that rarely changes. The prime function of a paternoster rig is to suspend one or two baits above a sinker, which will have the bait higher than any weed growth and reef that the angler may be fishing over. This rig is particularly good for drifting fish to cover vast areas as it allows itself to bump over weed or reef without the hooks getting hung-up or the bait ripping off.

The paternoster rig is simple in design – a length of 20-30lb nylon leader with two loops tied using overhand loop knots at equal intervals. At the bottom, another loop is tied so the sinker can be looped onto the mainline. Some anglers prefer to use a snap swivel here instead of tying a loop knot. Either works.

The quickest way to attach hooks is to loop them on each of the formed loops above the sinker. However, to create a more natural looking bait, I snip one side of the loop and tie the hook to the end using a three turn uni knot. This allows the bait more freedom to move in the current. Although any hook can be used when fishing a paternoster rig, you have to remember this rig is designed to be kept tight at all times. Even while drift fishing or with the rig suspended on the bottom under the boat, its design expects the angler to hold the rod in hand or in the rod holder allowing the line to be tight and every bite to be seen.

In this case, a paternoster rig should always be rigged with a circle hook or octopus circle hook. The circle is designed for non-angler interaction when hook setting, so when it comes to using a paternoster rig where the line is tight, once the fish takes the bait it’s hooked immediately. There’s another variation of the paternoster rig called the extended paternoster rig, but this is used more for targeting King George whiting with smaller #4 and #6 circle hooks, rather than snapper.

When it comes to rig selection, a paternoster rig can be used in both Western Port and Port Phillip Bay. In Western Port, it’s more effective when drift fishing areas such as the North Arm, Western Entrance or while fishing the rubble seafloor in Bass Strait. However in Port Phillip Bay, a paternoster rig is best suited to fishing directly under the boat while at anchor. When setting a berley trail, which tends to pool around the boat with the lack of current, the paternoster rig suspends two baits higher in the water column which are still visible to a hungry snapper, unlike a discarded half pilly sitting on the seafloor getting munched on by a crown-of-thorns starfish.

One of the most widely used rigs today is the running sinker rig. Targeting snapper in Victoria, it can be used in Western Port and Port Phillip Bay. Between both waterways, there really isn’t much variation, except for the physical componentry used to build the rig itself. The sole purpose of a running sinker rig is to allow the bait to be taken by a fish without feeling any restriction from the fishing line, rod or drag. This is best suited to those very finicky fish species on any given day, such as snapper in glass calm conditions or the middle of the day. 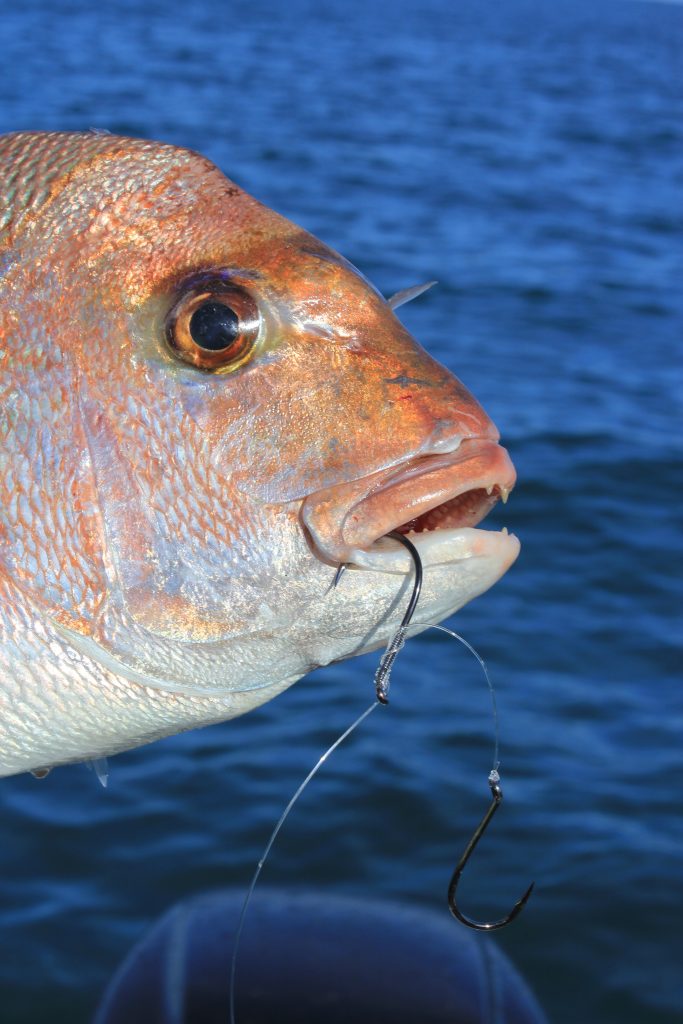 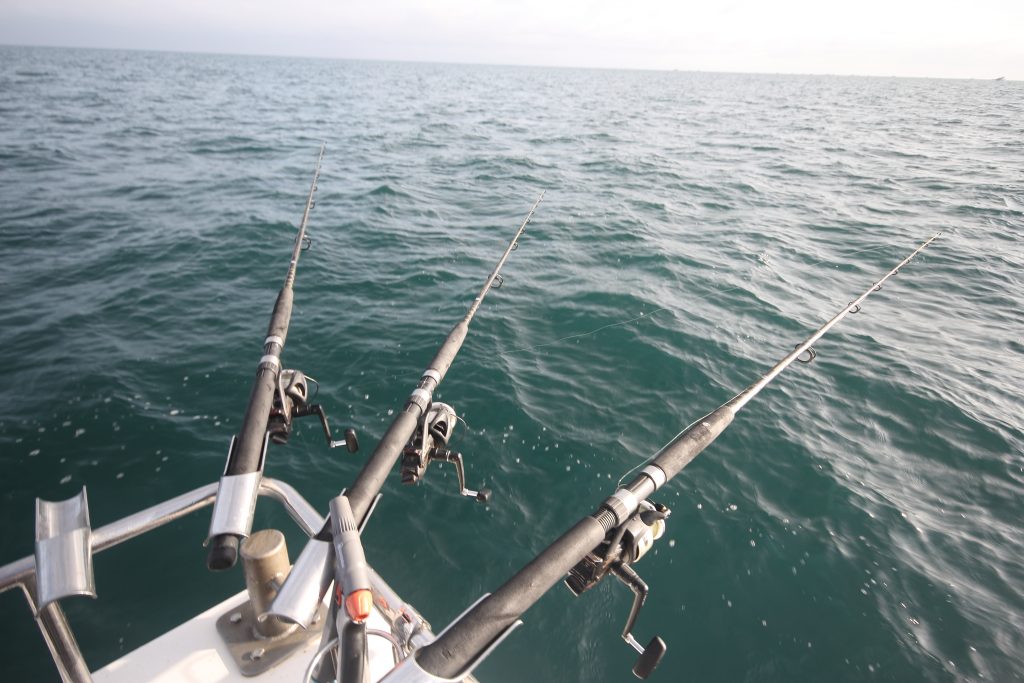 When fishing Port Phillip Bay, it pays to have a good set of rod holders and spread your rods out. In situations where you have wind against tide, tangles can be a huge problem. Lots of rod holds can prevent this. 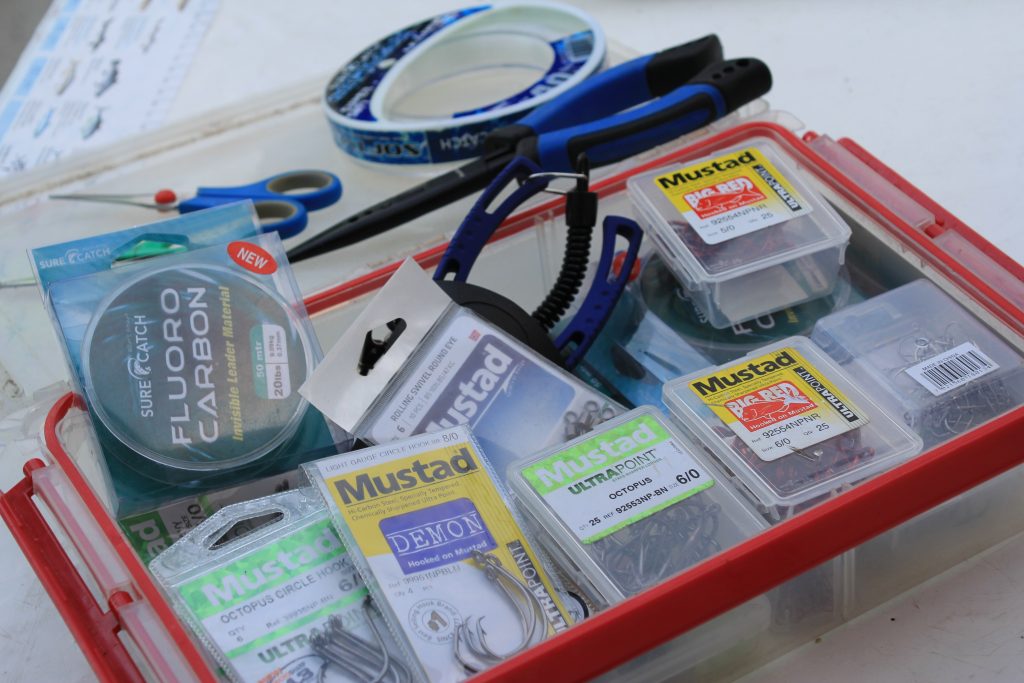 The tools – always make sure you have the right gear for the job at hand. 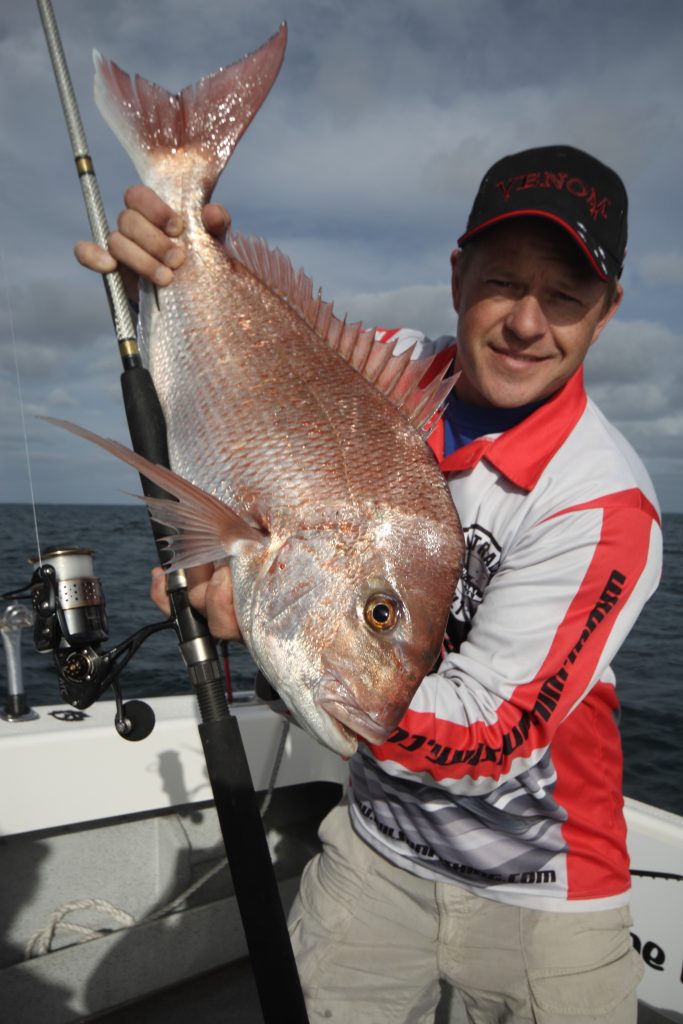 You can fish light in Port Phillip Bay, but you have to be wary of what the fish are doing to be successful. 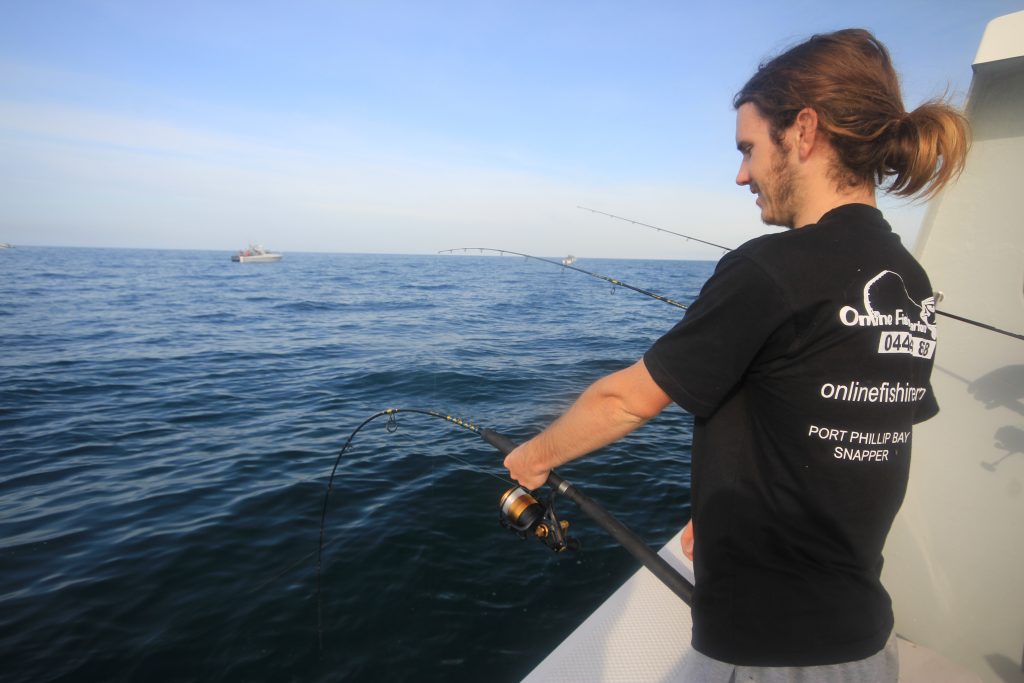 Pre-tied snapper rigs sent directly under the boat while berleying are highly effective. 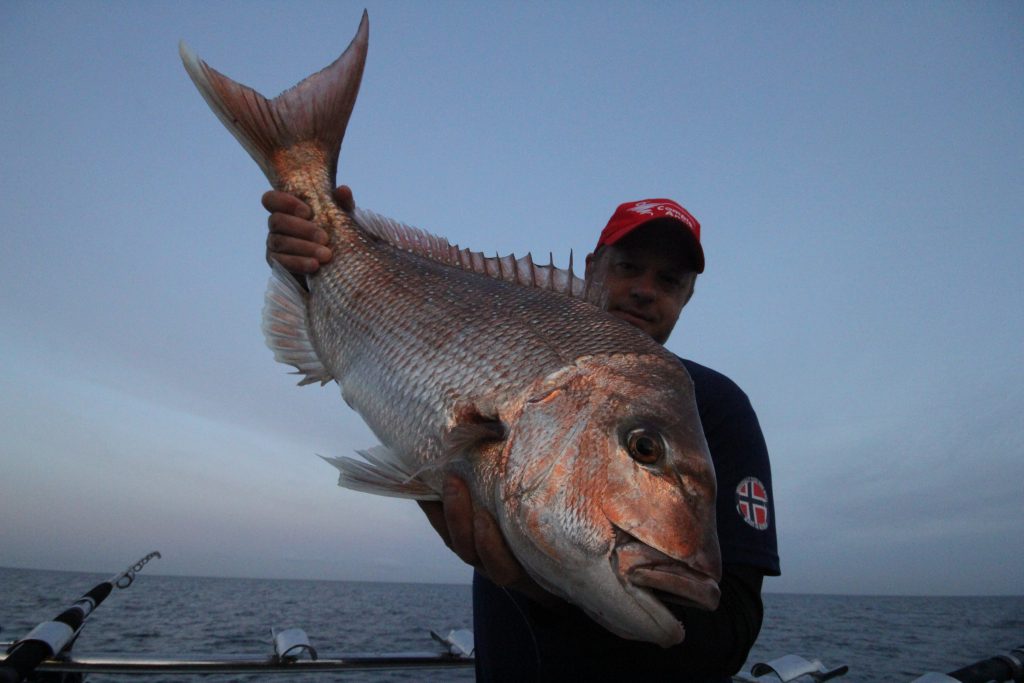 The author with a solid red, caught by switching rig techniques to adapt to the situation. 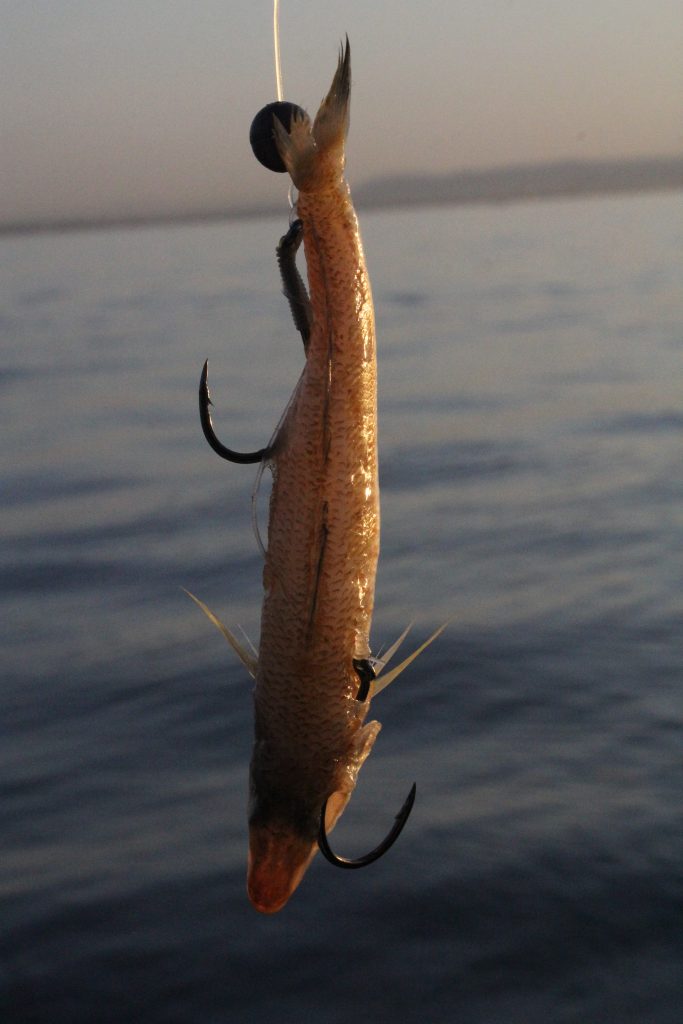 When the weather is rough in Port Phillip Bay, run your sinker right to the bait.

The humble calamari ring – the bait of choice for many anglers. 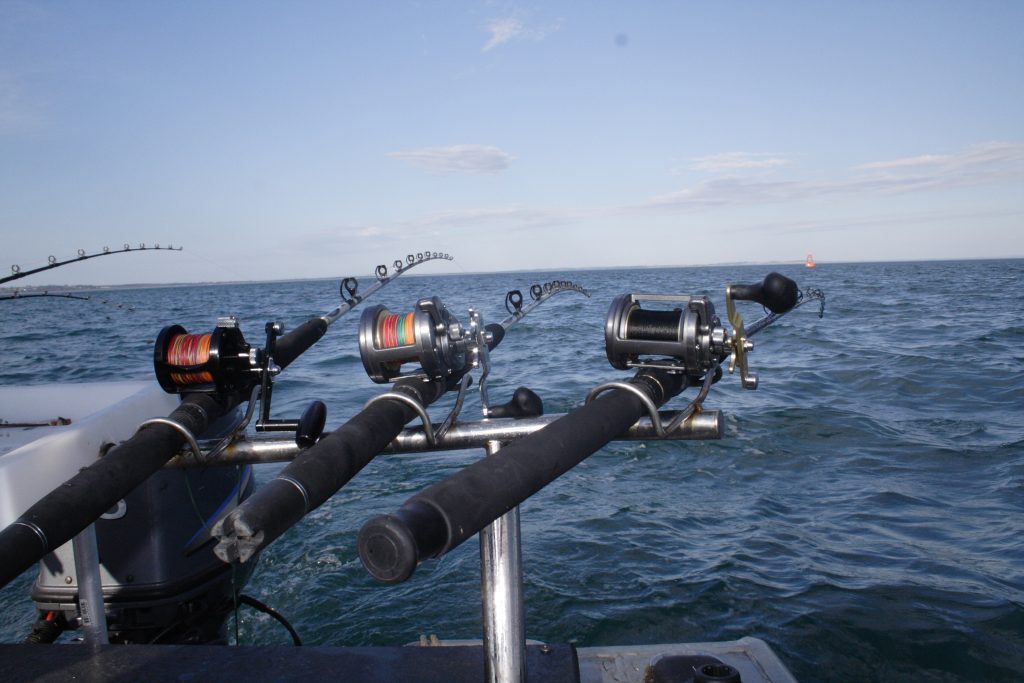 When fishing with overheads in Western Port, keep your rods at water level. This enables the fish to take a bait without feeling too much restriction. The hook will set itself and the reel will howl. 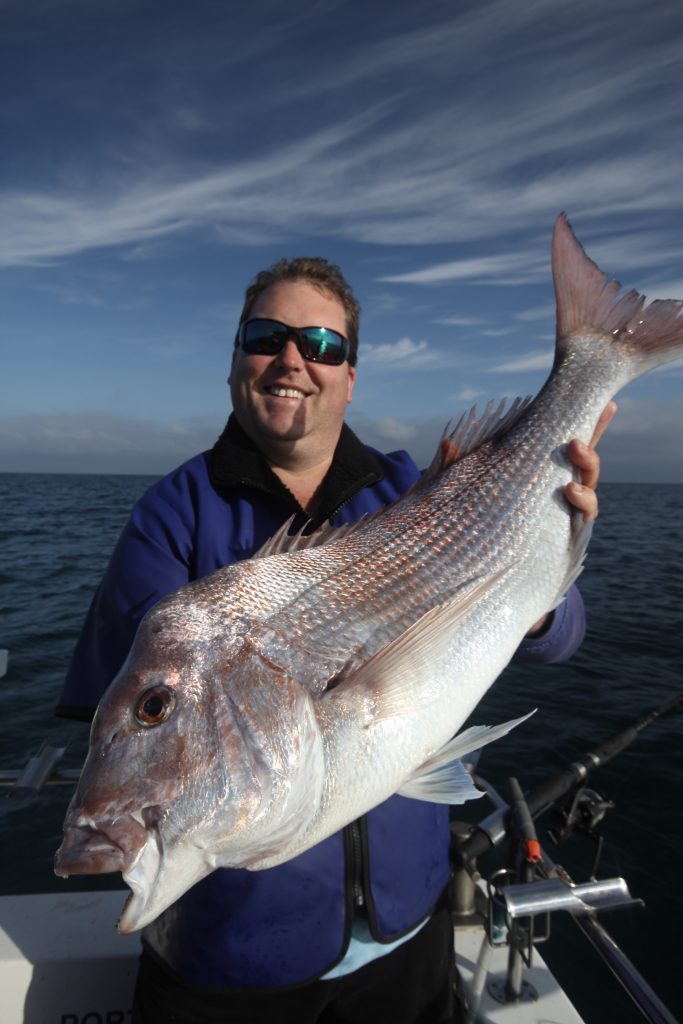 It doesn’t matter the size of the fish being targeted – the trap is the same. Use the best tackle you can afford at all times.

In Port Phillip Bay the running sinker rig is by far the best and most trusted rig used today, but due to the lack of tidal influence in its upper regions, the weight needs only 4g in a size #1 ball or barrel sinker. Of course there’s also a conundrum with sinker design too. Many years ago, Brian Rinaldi, whom many remember from the early Red Hot Fishing Charter business days taken over by his son Simon Rinaldi, once sat me down and spoke about the benefits of fishing barrel sinkers for snapper instead of ball sinkers in different fishing scenarios.

After breaking it down, I was left with this, ball sinkers threaded onto the line and cast with a bait will roll around on the seafloor even with very little wind and tidal movement. Should the boat be yawing, the situation can be much worse. On the other hand, in calm conditions, a barrel sinker will lay flat and hold the bait in position more. This is the ideal sinker to use on calm conditions and when fanning out multiple baits.

Sinker choice enters into the equation, so does where you place it on the rig. This is another conundrum that I swear by, given the weather conditions on the day. A sinker placed between the hooks and the swivel will have more weight on the bait end when cast. This will allow a further cast from the boat as well as enable the bait to sink faster towards the bottom.

This is particularly effective in rough conditions when surface wave action can cause the bait to stay higher in the water column, as the wind and waves toss the line around on the surface. Then again, a sea bird could take the bait once it hits the surface. In areas where there is limited tidal pressure like Mt Eliza, Mornington to Mount Martha, this version of the rig is recommended.

A sinker placed onto the mainline to run to the top of the swivel is ideal in calmer conditions, or where there’s very little current and you want the bait to sink slowly to the bottom to keep the bait in the strike zone for longer. It does this by sliding up the mainline when cast and landing in the water some 10m from the boat while the bait sails out much further. The sinker goes to the bottom, slowly pulls excess line and bait towards the bottom and leaves it to stay in the berley trail for a longer period of time.

When targeting snapper on this style of rig, the mainline tends to be monofilament ranging 15-20lb with a metre length of 30lb fluorocarbon leader. Due to the lack of current, a snelled set of size 5/0-6/0 hooks are better.

When it comes to using a running sinker in Western Port, all you know about the rig used in Port Phillip Bay can be tossed out the window – at least the componentry to make it can be. Western Port, due to its strong tidal pressure, reefy bottom and abundant toothy critters, requires the rig be beefed up.

The rig is very similar to that used in the bay, but instead of the debate about where the sinker goes, in the Port it’s placed onto an Ezy Rig suspended above the swivel. The reason is because sinkers in Western Port to hold bottom can range between 2-20oz depending where you fish. The Ezy Rig clip enables such a heavy weight to easily slide along the mainline without causing damage to it.

The metal clip should be removed and replaced with a 30-45cm length of 8lb leader line. This is to prevent the entire rig being busted off if the sinker is snagged in the reef. The Ezy Rig then runs on the mainline to a swivel and a metre length of 80lb trace with a single size 6/0 circle hook. Although the Ezy Rig can be threaded onto the mainline, be weary if you use braid. If the sinker gets caught in the reef and a fish takes the bait, the braid can cut into the Ezy Rig and cause the braid to break. In this case, run the Ezy Rig on a length of 60lb nylon leader and join it to the braid with a slim beauty, FG or Albright knot.

This version of the running sinker doesn’t need to be any more complicated than outlined above. Providing you built it from quality components, the setup will allow any snapper to take the bait without feeling any restriction. The circle hook, once the fish runs, will set itself if there’s drag set on the reel. At the end of this deliberation, the rig to use for snapper is quite simple – both the running and paternoster rigs have their place and time.

The allure of modification

by Dan Kaggelis • It’s hard to find an angler that doesn’t love lures. The prospect of flicking out an artificial offering and fooling a fish into feeding is hard to beat. While lure fishing […]

by Jamison Godfrey • This is great pasta favourite of mine with the fillings endless that can be used, however it does require a bit of time and a pasta machine necessary to roll out […]

by Tony Kemna • Although the Gippsland Lakes system is huge, with fishing options around every corner, the true anglers’ paradise can be found through the Lakes Entrance Bar. Bread and butter species such as […]