It’s hard to beat a trip to far north Queensland in winter. Mild nights, warm days and fish waiting for a chance to slash at a fly make the idea of that trip north very appealing.

For us southern anglers, the fly fishing up North is hard to comprehend. It’s so diversified and with so many opportunities at times. And yet, it’s virtually untapped. Fish seem to be suckers for flies in areas where they have not seen them and that’s one of the huge advantages of casting a fly in these warm waters.

If planning a trip north, a boat is going to be an advantage, but by no means a necessity. There are plenty of areas where fly casting from the shore is viable and the fish very catchable. The main criteria will be some depth in the water in close and signs of fish activity. A startled flash of fleeing bait, a flick of jelly prawns or a signature large swirl near a snag are signs to look out for. Casting a fly into the mix as quickly as possible is the trick, because most tropical fish do not hang around, with hit and run tactics standard fare.

8 or 10wt gear?
Tackle needs to fulfil a definite role, which is that of casting a fly that may well be tied on a 3/0 hook and then with capability of playing out a fish that is going hard right from the moment of hook set. For the record, I’ve tried 10wt gear off a beach, and it works OK, but unless you’re targeting barra around snags or rocks, it’s just too big, becoming tiring after a couple of hours of solid use.

From the sand, 8wt gear seems to be the best to use with least compromises and a salt water quality fly reel set up with 300m of braid backing on a high end 8 weight rod, and will stop virtually anything able to be hooked from a beach.

The thing to remember is that a full length fly line has a lot of drag when being towed by a fish and when combined with the reel’s drag helps to turn a fish and see it coming towards the shore. Certainly a big queenie or golden trevally will turn on some fireworks from hook set, but after a few hard runs it’s not hard to see the backing returning to the reel. One good tip is to keep the rod low to prevent jumps from excited queenies! 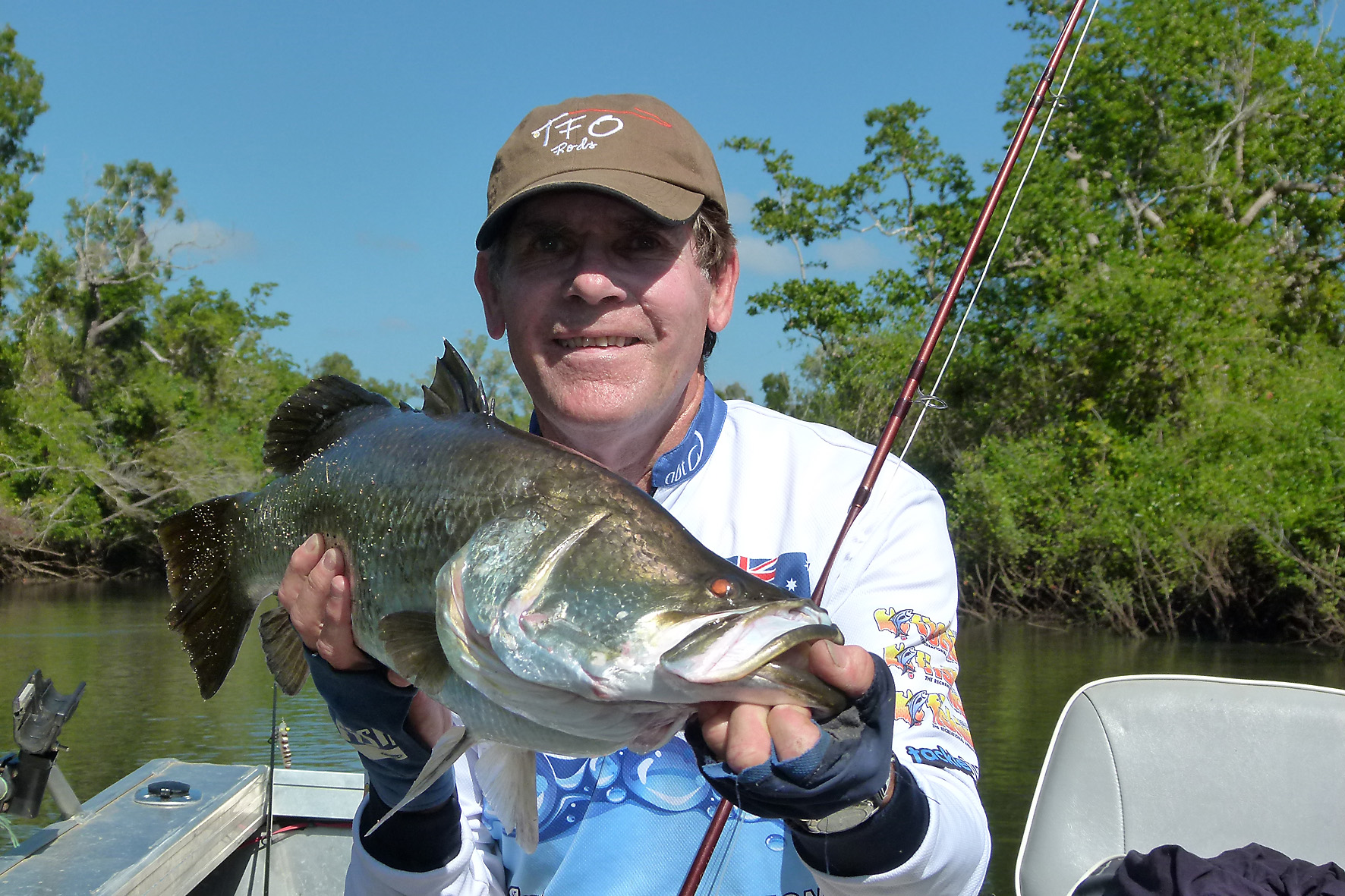 It’s hard to do a trip north and not target barramundi. 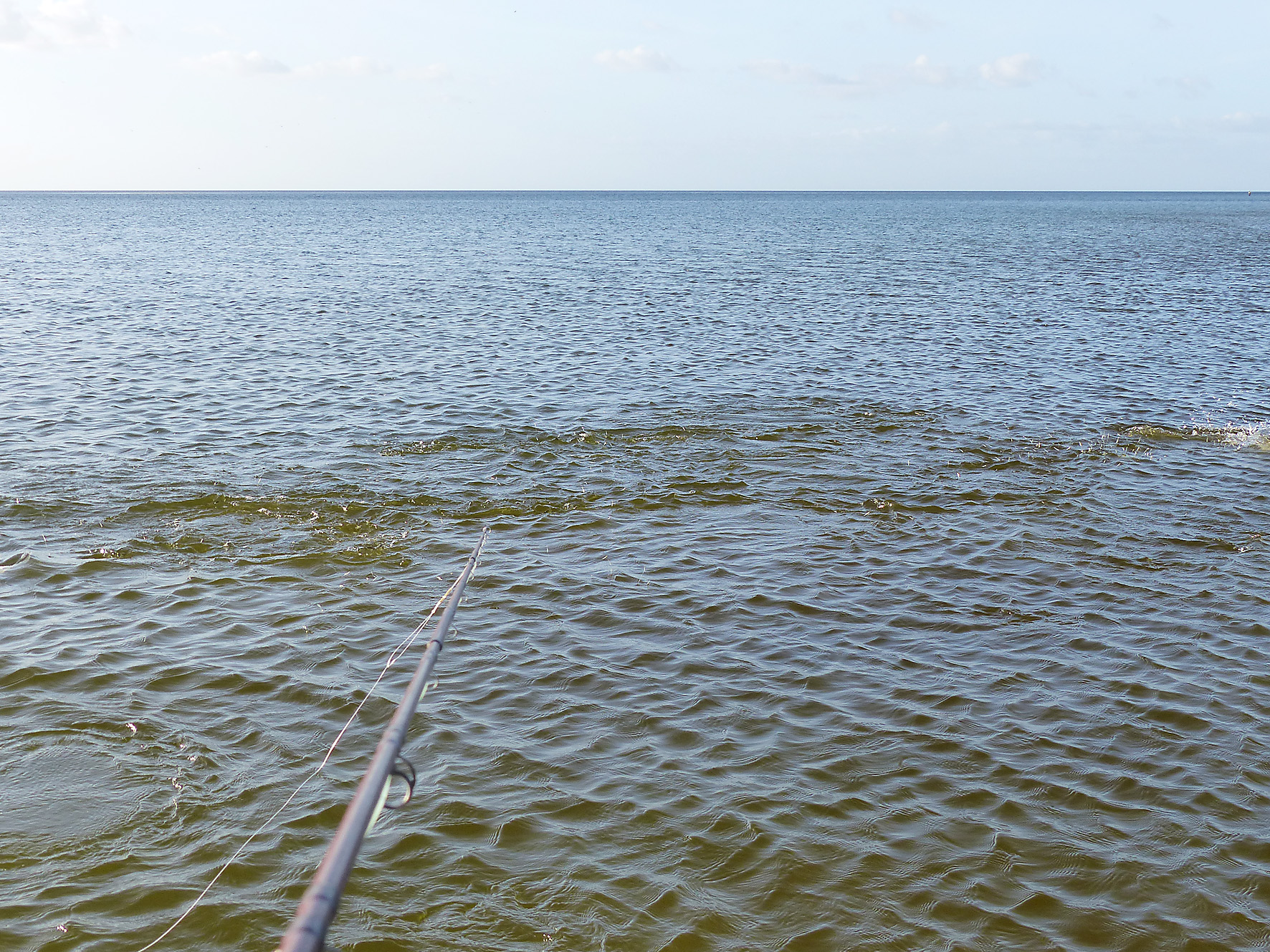 A familiar scene in the far north. When fish are feeding this close to the fly rod, it’s hard to miss the action. 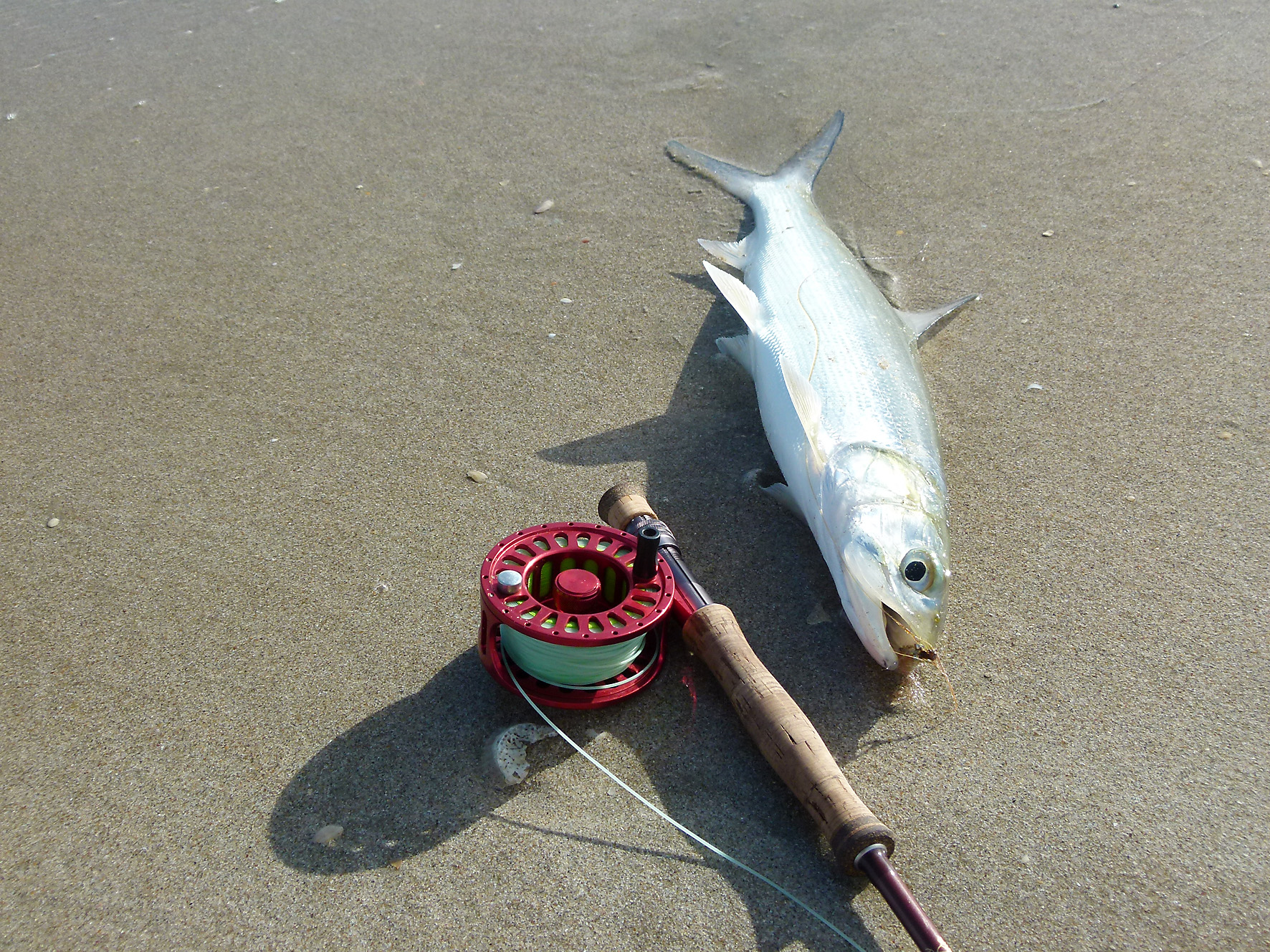 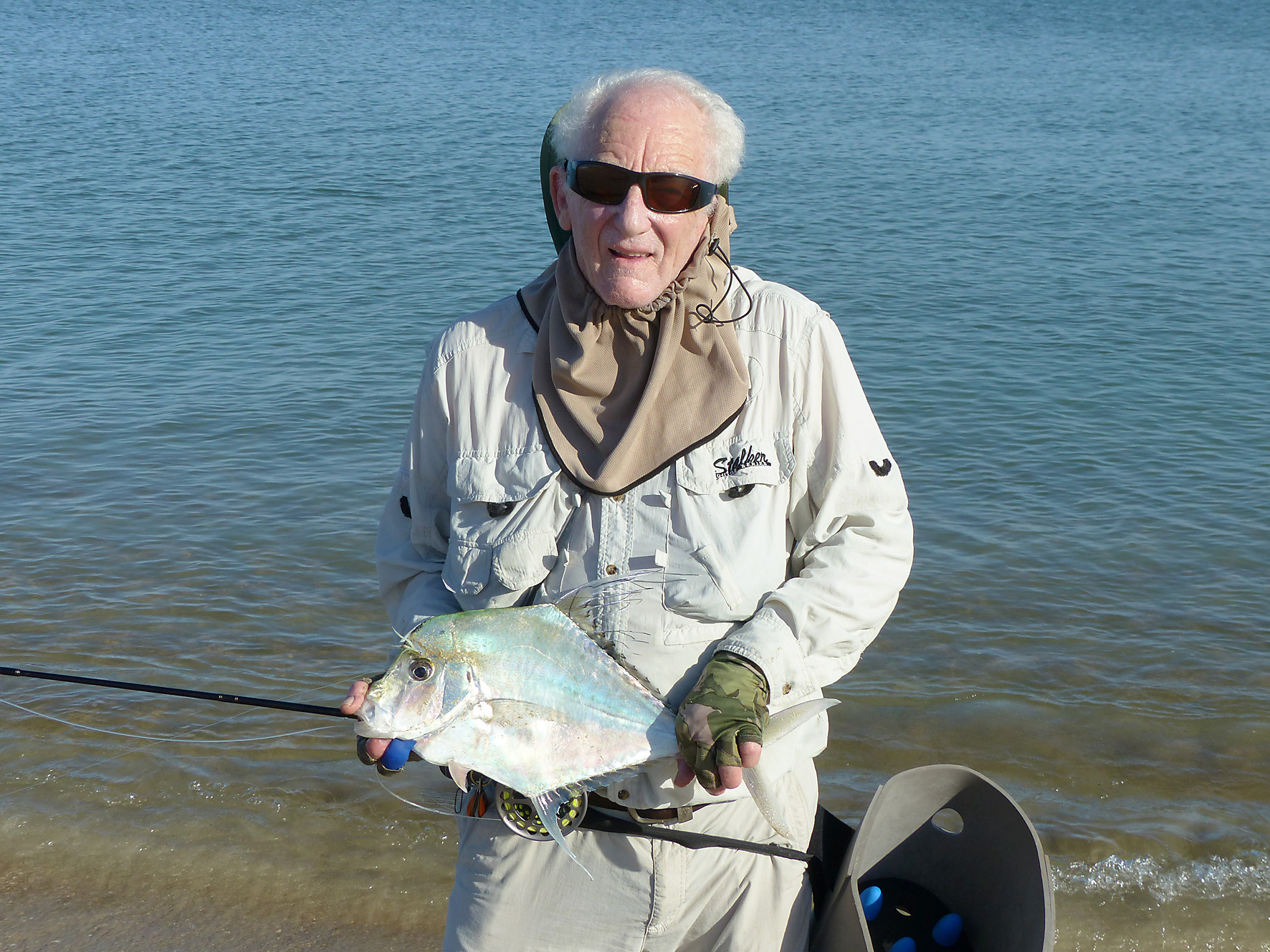 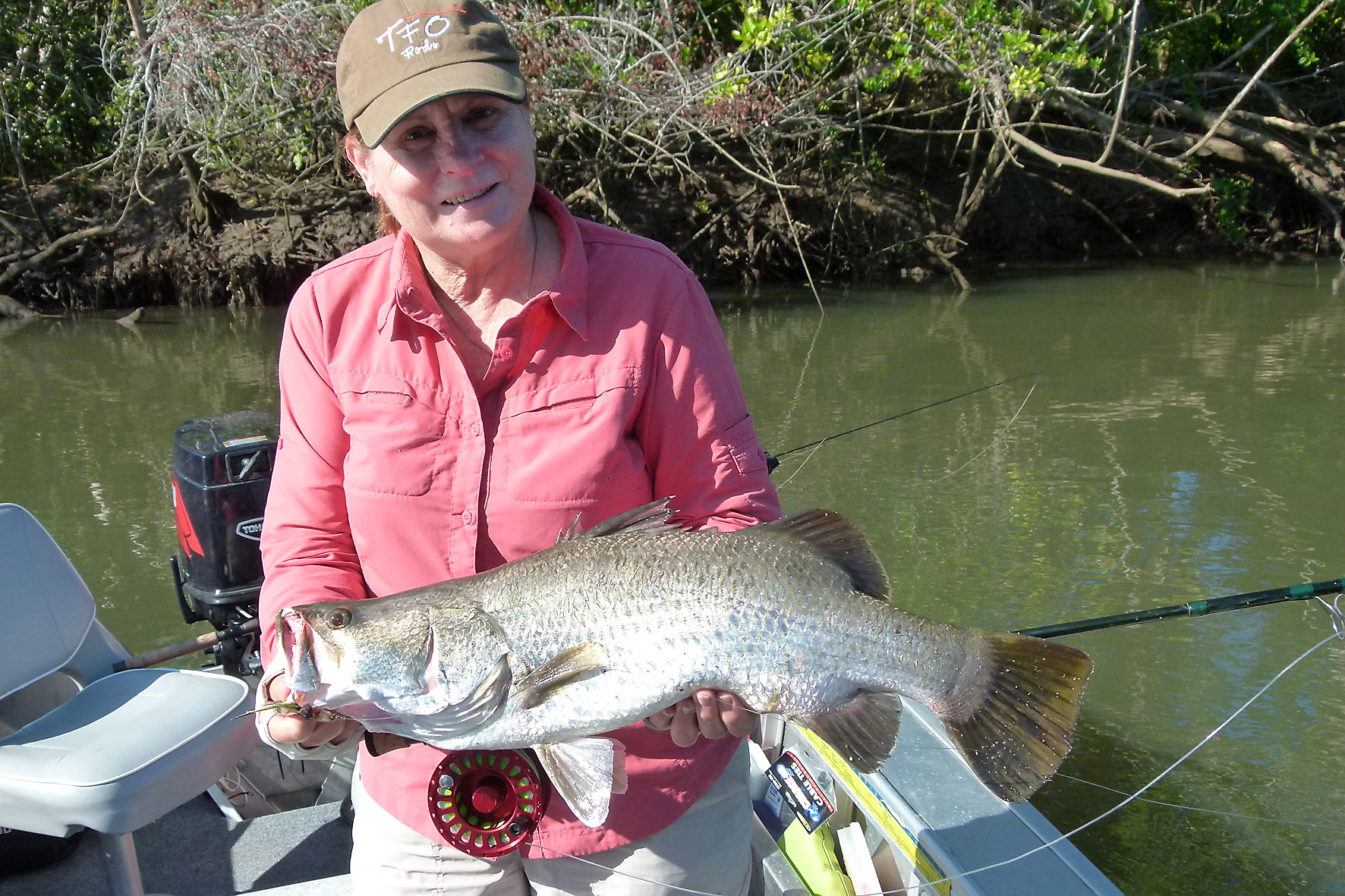 Barra are one fish that demand powerful tackle such as a 10wt rod to in the hands of a competent fly rodder. 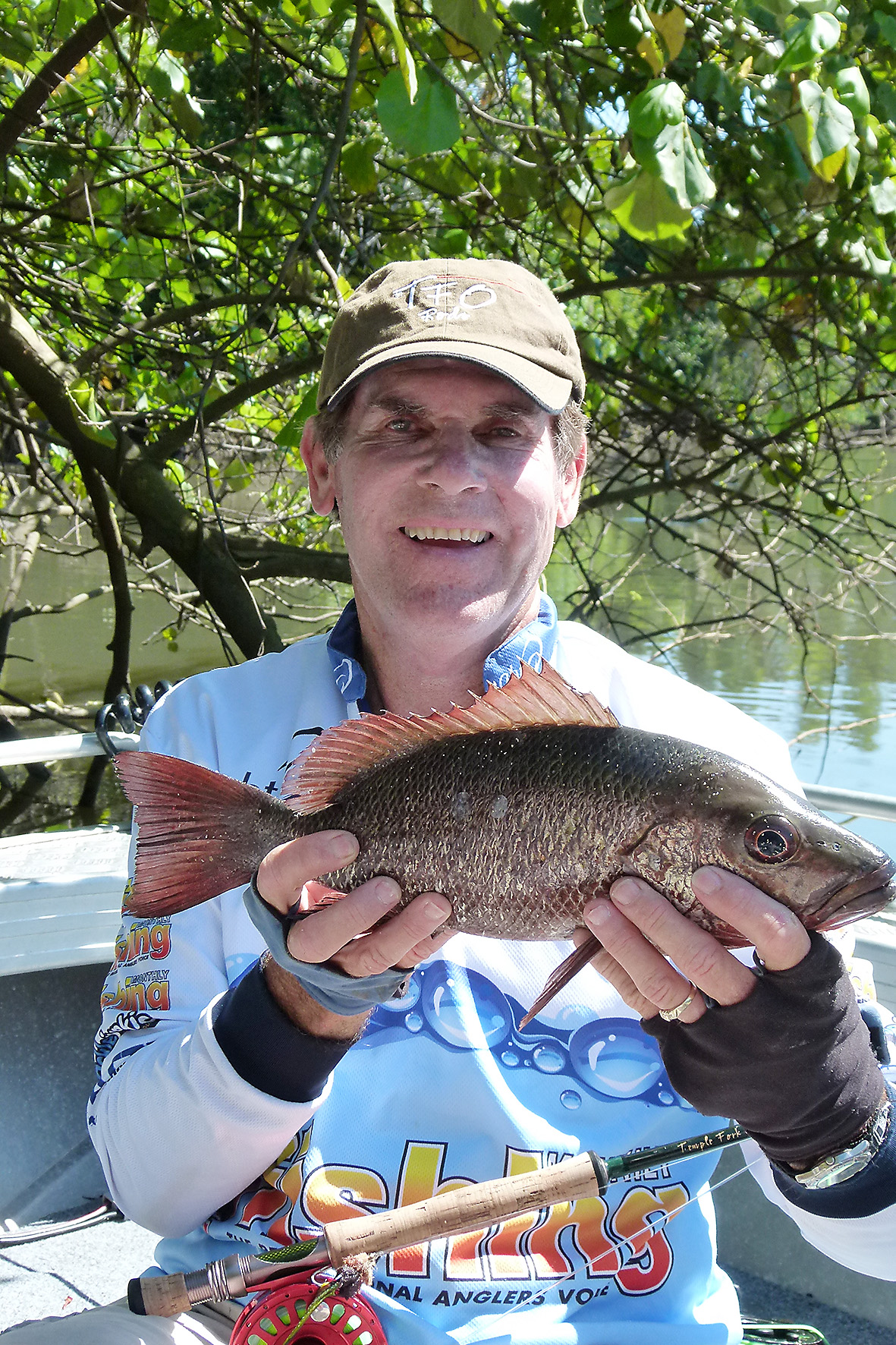 Mangrove jacks are tough fly rod opponents with a 10 weight rod sometimes not enough to handle these fish. 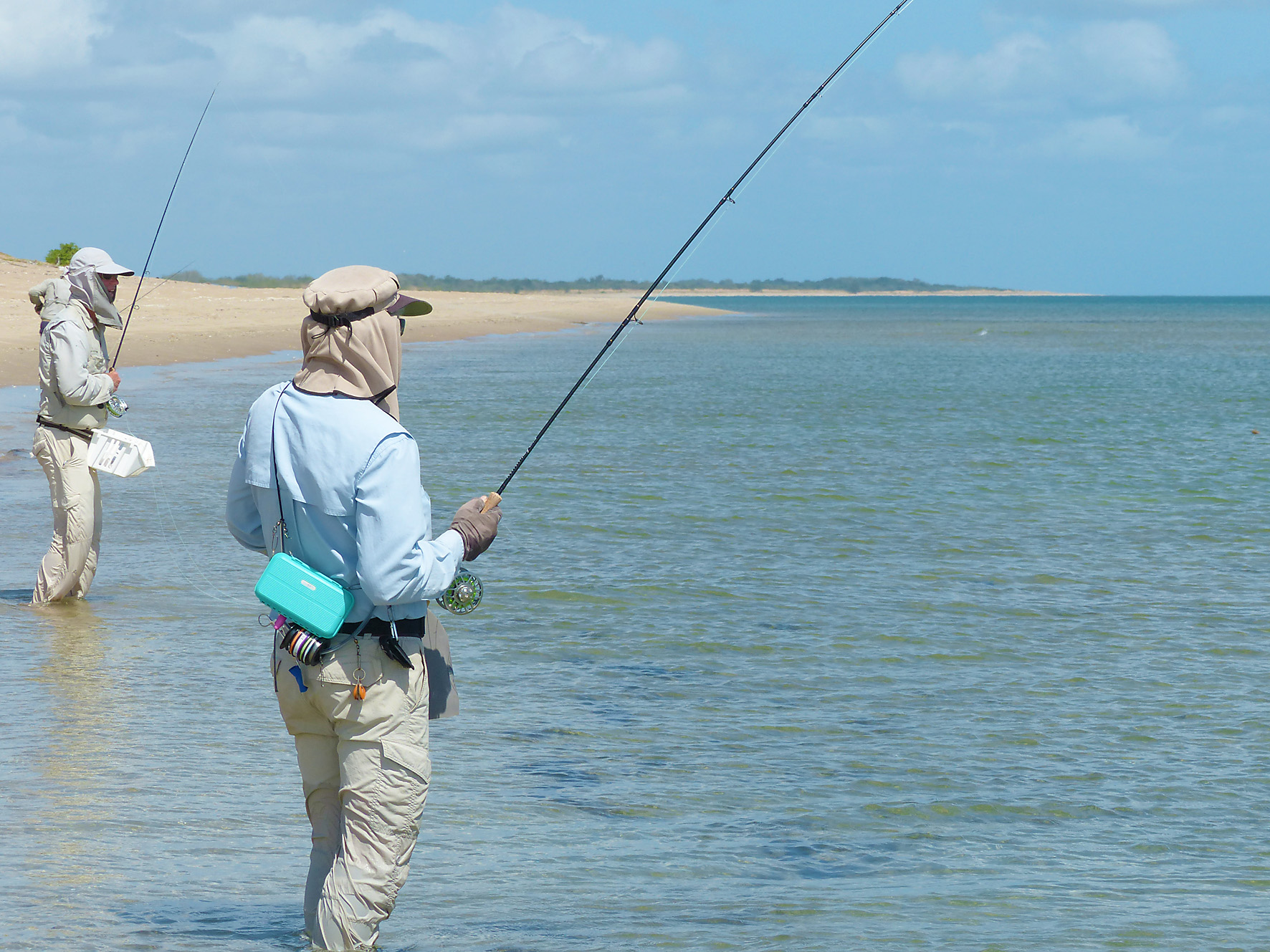 How inviting is that? A couple of fly rodders on a tropical beach with nice clear water.

From a boat, and if fishing for tuna or mackerel, I’d set up the 10wt to shorten the time of fighting the fish and maybe minimize losses to sharks. Never mind the crocs; they get all the headlines these days, but it’s the sharks getting all the fish!

Line Selection
Choice of fly line should see – dare I say it – two lines on spare spools. For surface and near surface work, a sink tip fly line is ideal. Most fish seen working on the surface, like queenies, mackerel, goldens, tuna and tarpon, are also quite active just under it as well, so a sink tip line, where most of the line floats thus aiding recovery for another quick cast, can be stripped hard to bring the fly near the surface and excite the bite.

Remember, quick casts are the key to success. When a fish chops or slashes into bait, it usually won’t be there for long, so as quick a cast into the mix as possible is the trick.

For the record, I’ve used a full floating line, but the shadow can frighten even fish that seem thoroughly engrossed in gorging themselves, and I do believe that a lot of better fish in a school seem to be under the surface any way, hence my leaning towards a sink tip fly line for tropical work.

The second alternative is the intermediate line, vital for working around snags, mangrove banks or rock areas for predators such as jacks or barra. These fish won’t budge far from their chosen bit of habitat, so the fly needs to get down to them to be a chance. The intermediate sink rate line will take the fly down in a graduated, easily controlled manner with the angler fully aware of where the fly should be. The take will easily be felt due to the rod being almost pulled from the hand!

Baitfish patterns the go
Fly choice is simple. With very few exceptions, if it looks like a small baitfish, then it will be scoffed.

Jelly prawns are a great example. When fish are feeding on jelly prawns during cooler months, they will often refuse all flies except one that looks similar to a jelly prawn. This is tricky as most of these little shrimps hardly ever exceed 3cm in length, and many will be smaller. But a size 6 or 8 Crazy Charlie with a mix of buff or pale pink in it (you will need to roll your own here) can work. There’s no certainty when fish are focussed on jelly prawns.

Whether relying on a baitfish pattern or a jelly prawn, the trick is to get the fly moving the instant it lands, and moving quickly at that. Keeping the rod tip more or less pointed at the fly to minimize slack is best and soon as a hard tug is felt, a solid strip strike should set the hook. Obviously, these tactics are never going to work with a 6kg tippet, so upgrading to 8-10kg tippet makes more sense.

If barra or jack fishing, don’t overlook the important 15-20 kg bite off retarder the fly is tied to. This only needs to be 30cm long to be effective and won’t inhibit casts at all. Leaders should be around a rod length and I make mine up with sections of 60lb, 50lb and 40lb Penn 10X (or similar supple line) in diminishing lengths with 15kg and 10kg FC100 for the final sections if fishing straight off the beach. The bite off bit is only used when after barra or jacks.

If fishing for mackerel, I set up around 15cm of single strand wire; and this will inhibit bites to an extent but can ensure extra fish for dinner.

Please remember to mindful of crocodiles if heading north, particularly if you are shore based. Don’t fish in areas if you can’t see the bottom, and if you’re not sure, stand back from the bank when fishing, or don’t fish at all.

by Ross Virt • Australia is a country that has it all: wilderness, dramatic scenery, crystal-clear streams full of Murray cod and the opportunity to take them on the surface with the fly rod! The […]

Tech Tricks: How to rig a skipping gar

by Gordon Macdonald • With waters warming during spring, anglers will be entering the prime period to target one of the numerous billfish species, which grace our Southern Queensland waters. The two main species on […]