Set on a vast tableland with trout waters stretching from around Glen Innes to the north, Tamworth to the south, north east to Dorrigo and then to the southeast Walcha area, the New England trout streams have been blessed with the one thing they need for successful angling: rain.

In fact, it’s been a nicely wet and cold winter. Certainly not the sort of conditions you and I would enjoy, but perfect for those feisty little trout tucked away in the corners, runs, and undercut banks of streams.

Finding Fish
Over the entire New England area, there are numerous streams holding trout, and if visiting the area for the first time the trick is to check out streams at the higher altitudes. Many streams will be on private land and it’s wise to enquire at the nearest property for permission to enter and fish, unless the particular section of water is adjoining a roadside rest area. Such is the case with the Beardy Waters stream near Glen Innes for example.

Local sport stores, town information centres and so forth can provide information on local trout waters, because the local infrastructure encourages the sport.

For the new fly anglers, it’s sometimes pretty hard to get onto those first fish and learn how to play them. If you want to learn how to hook and play fish, a trip to Dunmore Waters, which is a private fishery west of the small town of Ben Lomond, will be a great way to start. A Google search for Dunmore Waters reveals all.

Ebor’s the hub
Undoubtedly though, the epicentre of New England trouting is the small town of Ebor due east of Guyra and located roughly halfway between Guyra and Dorrigo. Ebor is around 1500m in altitude and has over a dozen trout waters within an hour’s drive. In fact, there are plenty of trout in the Guy Fawkes River right in town, and it’s a treat to order a bite to eat from the Ebor Falls Hotel Motel adjacent the river and enjoy it while watching trout rise. The pub’s a great place to stay too.

The famous Ebor Falls are on the southern outskirts of town and are a popular tourist attraction, along with the LP Dutton trout hatchery 14km south of town on the Armidale Road. The hatchery is a must-see for trout anglers and it’s amazing to see just how large both brown and rainbow trout can grow if given the opportunity. Fish over 3kg are common.

Whether you plan to fish with fly or lure, there’s a New England stream that’s just right for the job. Considering Ebor as an example, the rivers and creeks in this area tend to run shallow (around a metre’s depth) on the gentle slopes between valleys, only to tumble big time into gorges where they become a series of pot holes, runs and cascades under roaring falls.

The upper areas with their meandering sections within small flood plains interspersed with tree shaded runs and riffles are well suited to the fly angler, while the deeper, faster, sections in the gorge country might well be home away from home for the lure angler. 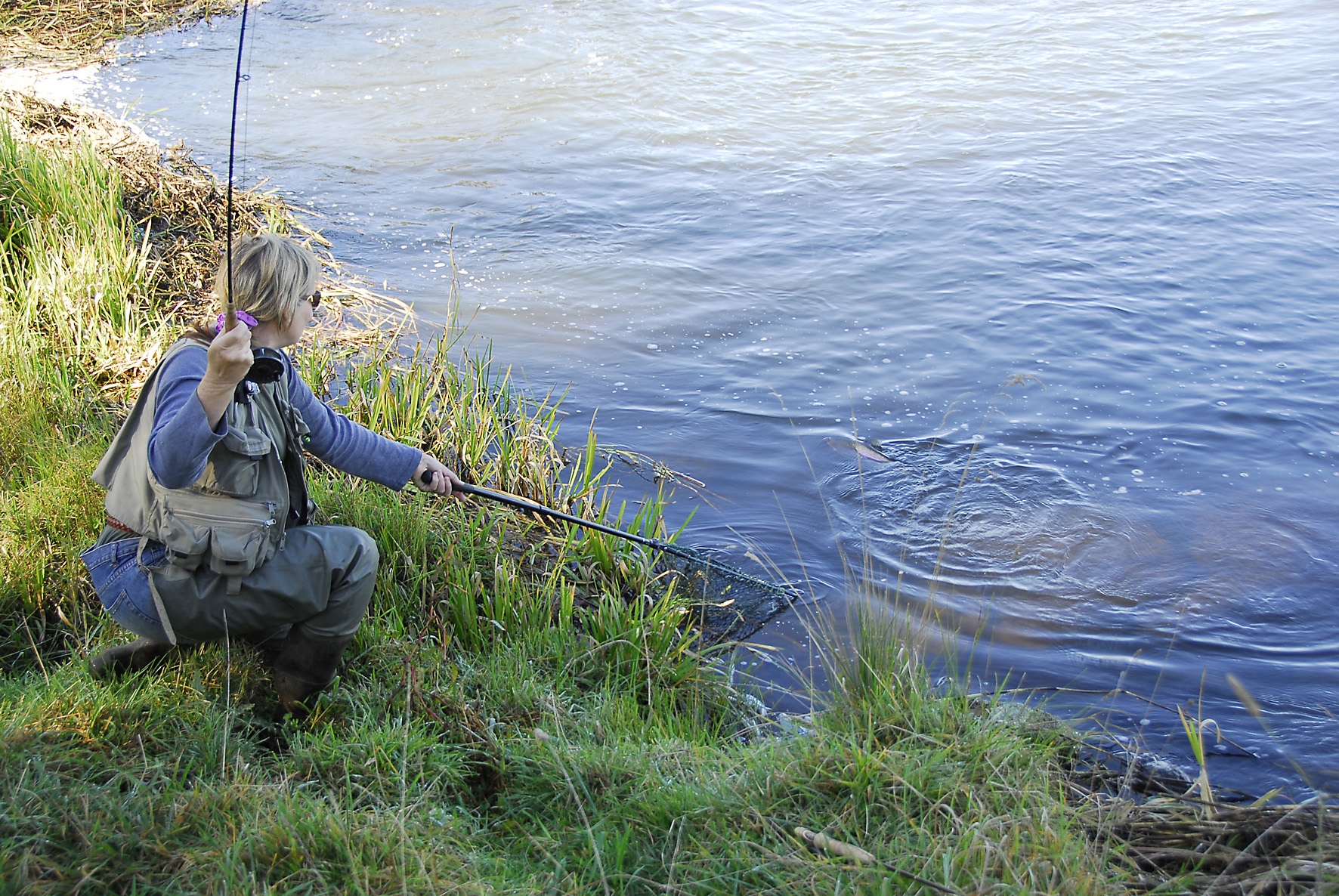 Just another half metre and it’s in the net! The author’s wife Denise just about to net another New England rainbow. 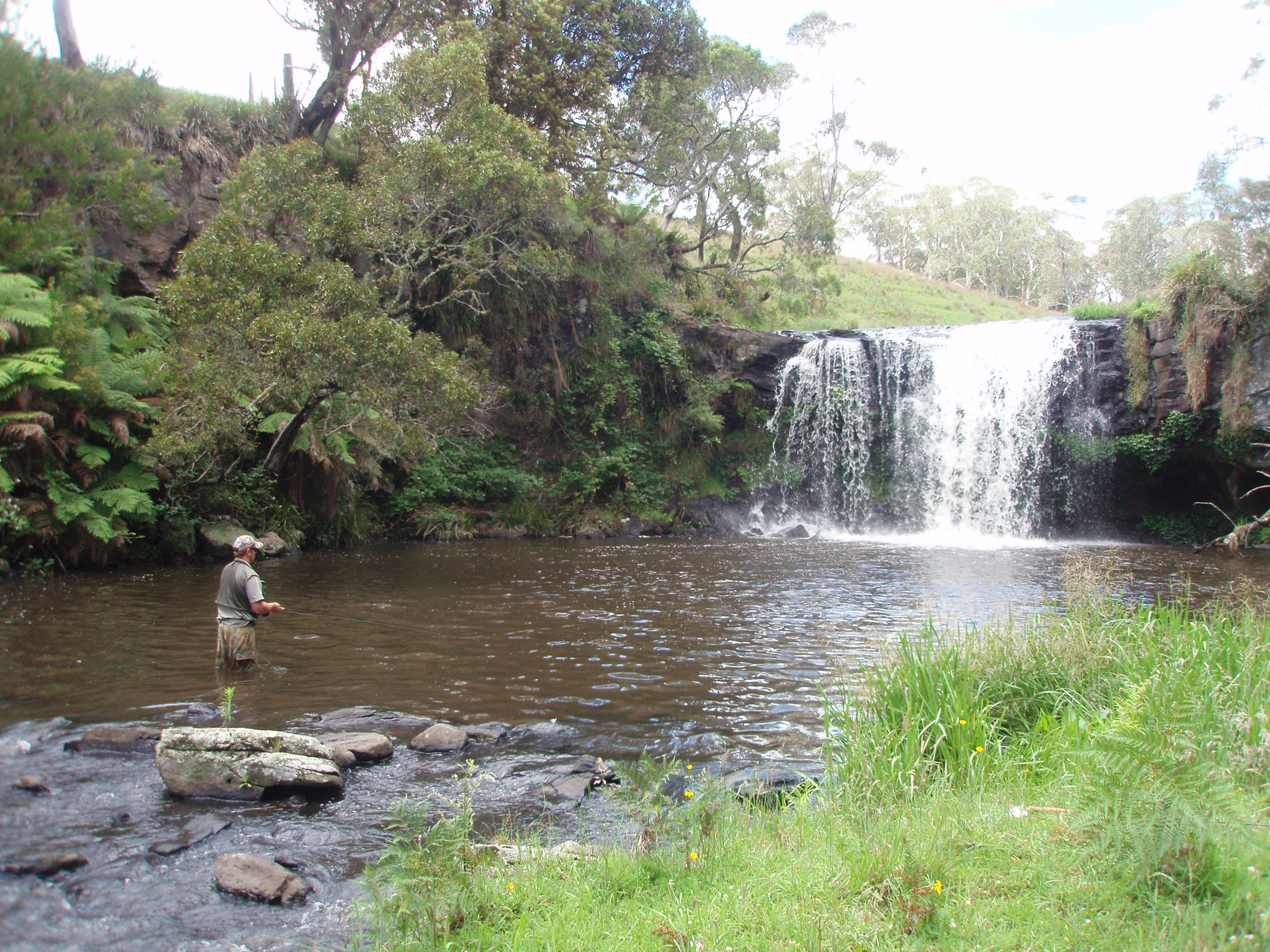 There are plenty of pools under waterfalls within the New England area, and these are perfect for both fly and lure anglers. 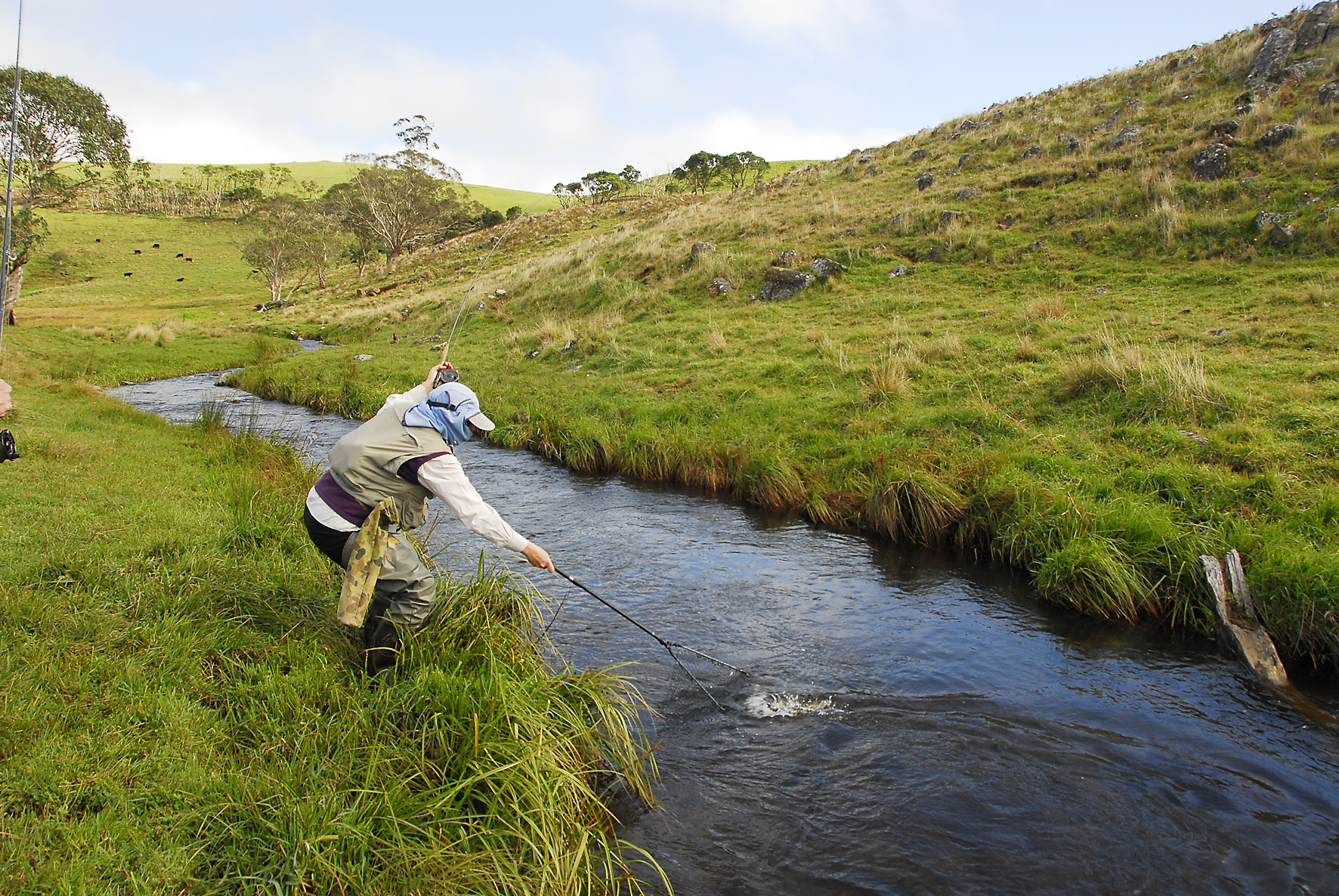 Most valleys around Ebor have streams running through them and this one is typical of the area. 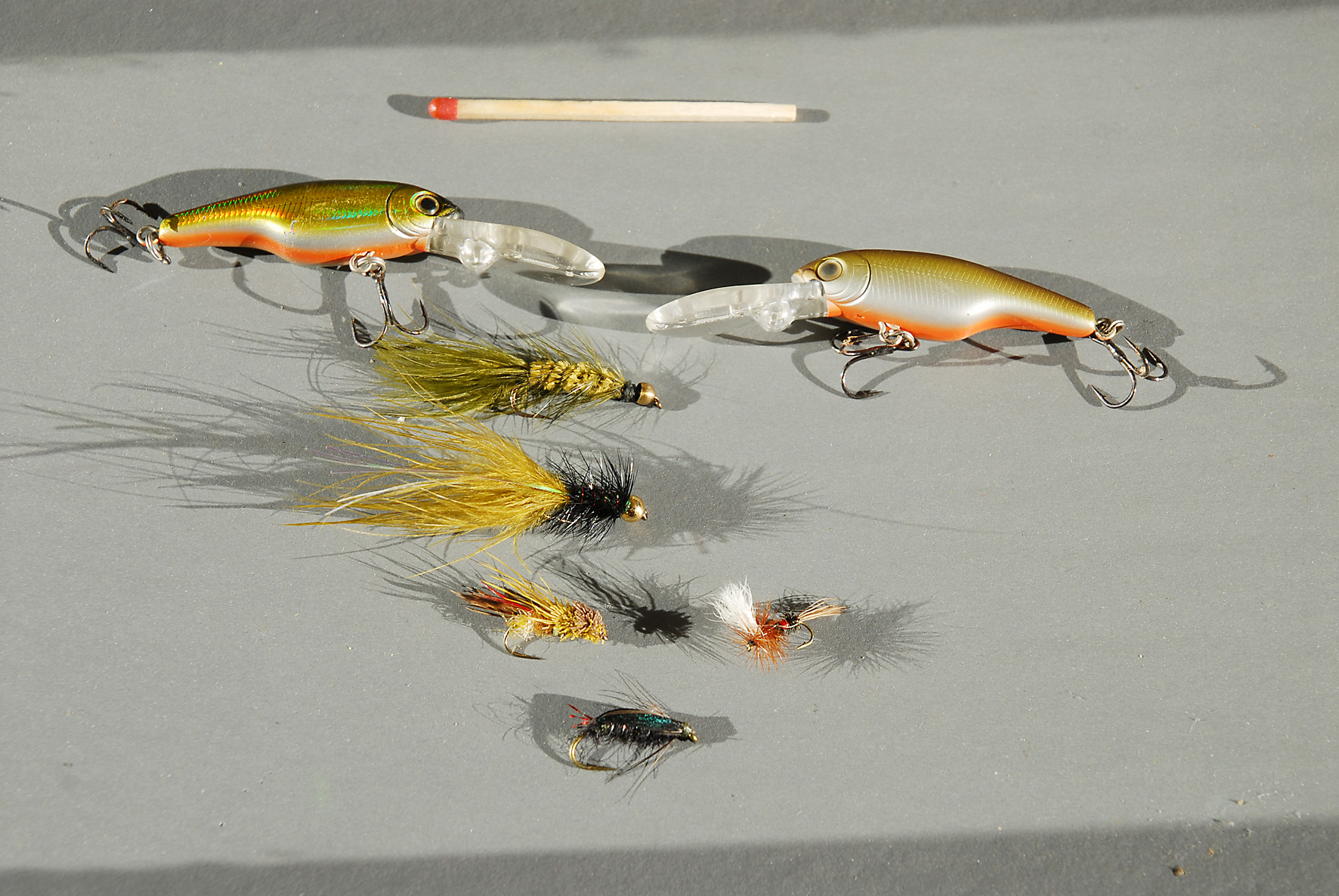 Less is more for trout. Keeping presentations small is the key for New England trout. 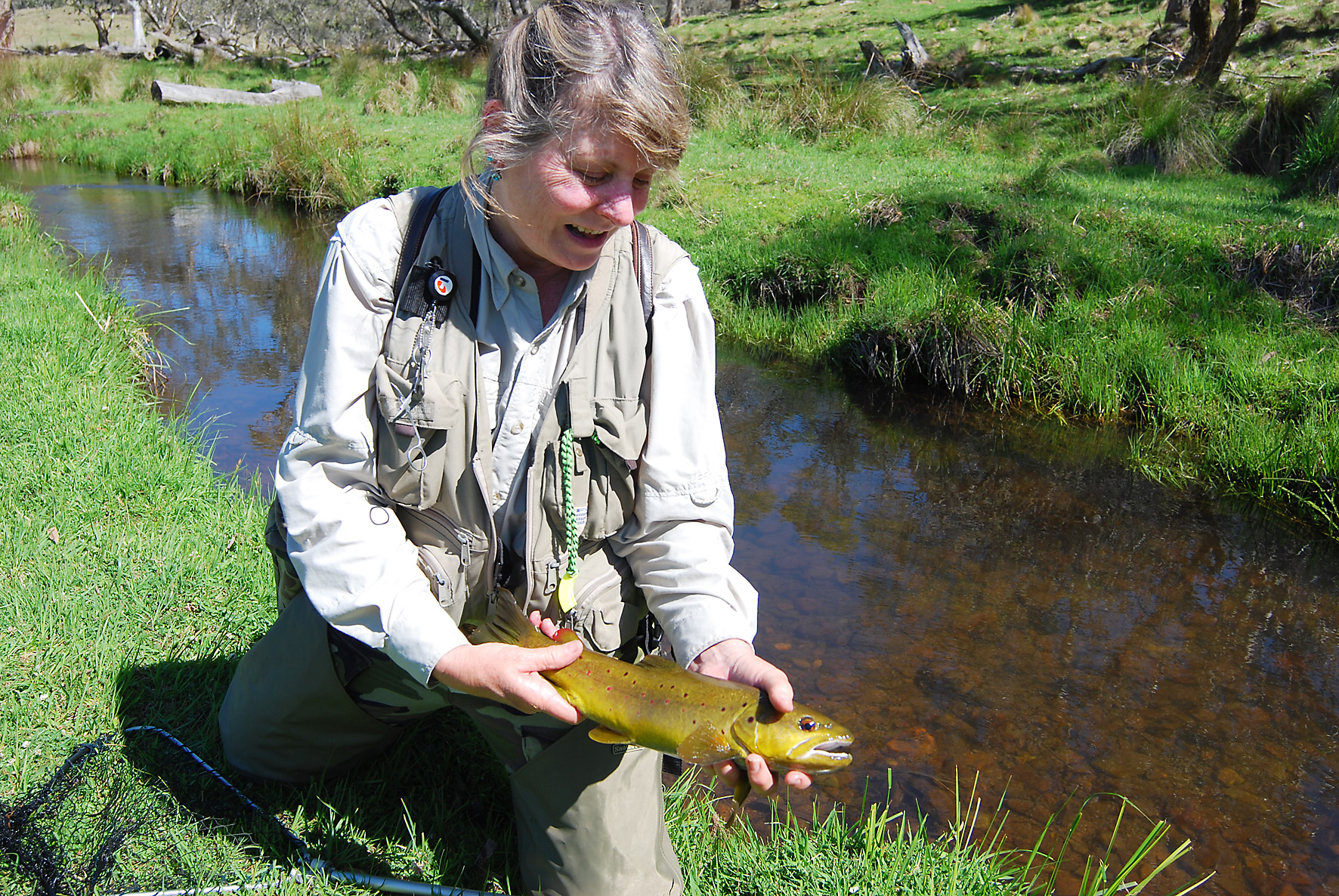 Small water, and a nice little brown trout. Brownies are common in many of the New England streams. 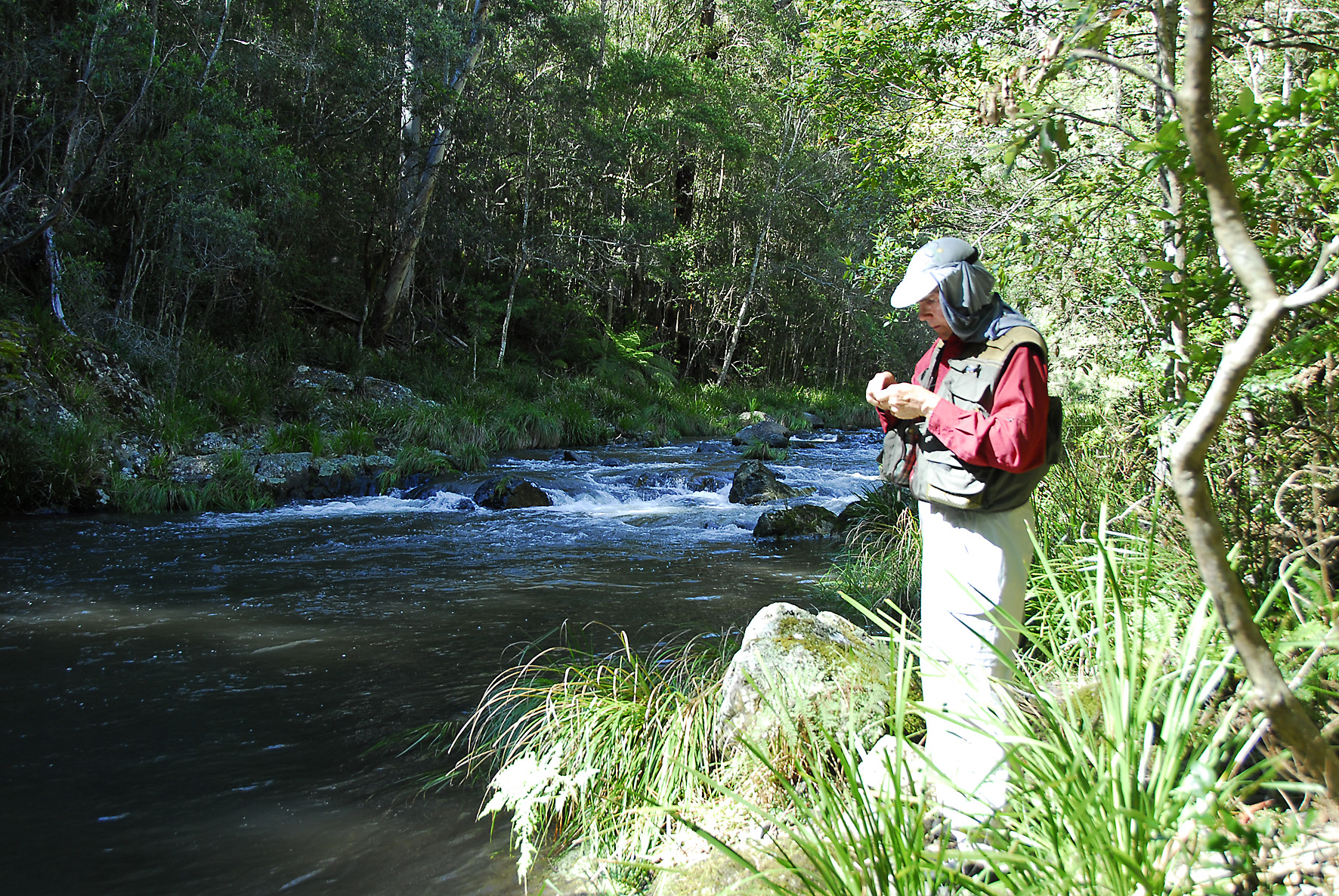 The author in a moment of reflection. “How could that fish have busted me off so easily!?” 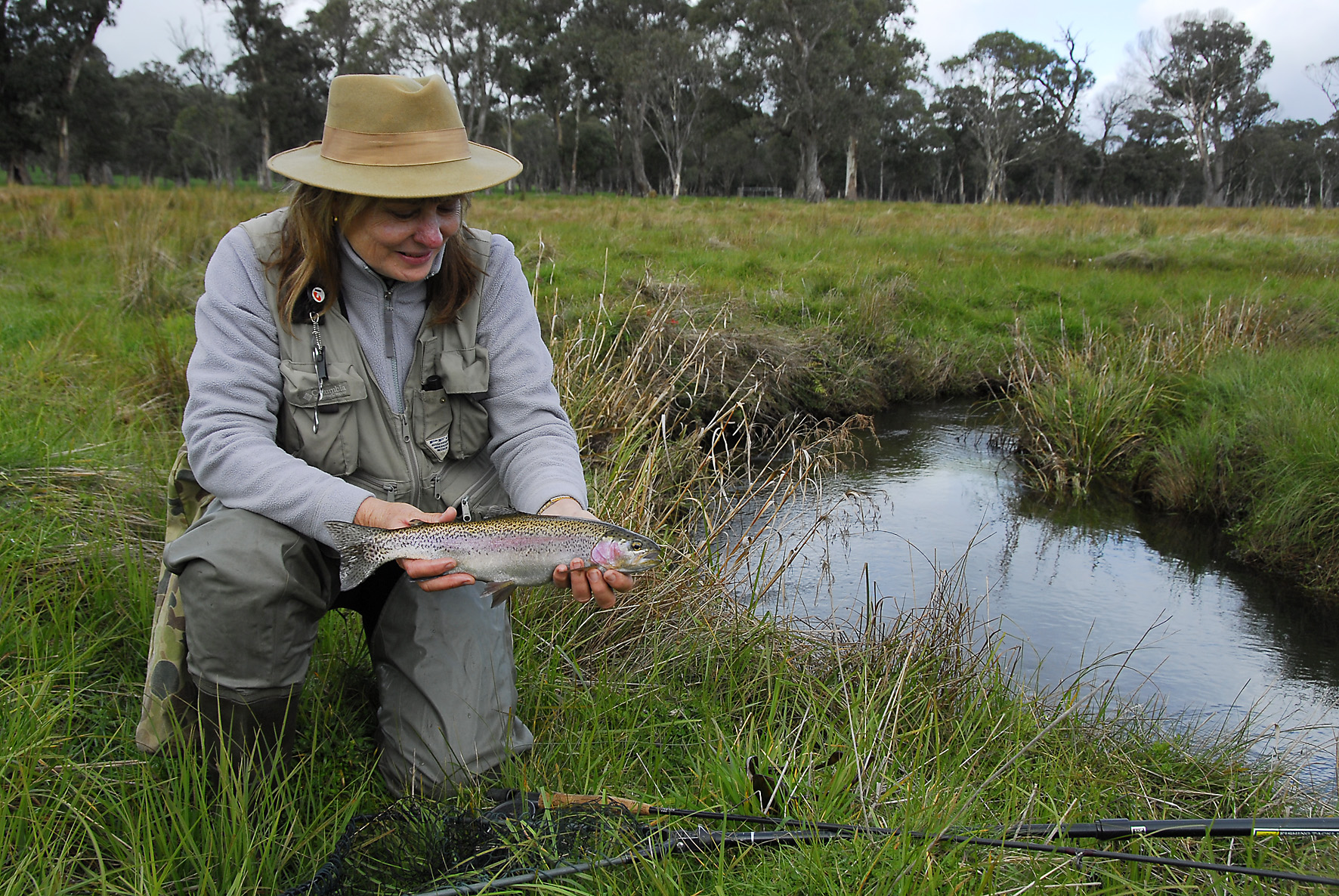 Small meadow stream, a neat little rainbow, it’s what the New England trout scene is all about.

Fly Fishing
Fly fishing New England’s small, enticing waters is strictly light tackle work. A 5wt outfit set up with a floating fly line is a joy to use. A light outfit like this provides lots of fun with the resident rainbows and browns and is perfect for casting size 12 or 14 dry flies such as a Royal Wulff, Humpy, Red Tag, Adams, Elk Hair Caddis, grasshopper or flying ant. The flying ant is a vital fly for times when thunderheads rolling over the escarpment indicate that a storm is on its way, and it’s time to think twice about the graphite rod in your hand! Termites will take to the wing in stormy weather, and those that end up in the drink are irresistible to trout.

The other dry flies mentioned are great for all purpose work, and are handy when a hatch of insects is on. Even when the action isn’t so hot though, they’re just as effective for searching out heads of runs, side waters, and those little areas of cover where trout choose to lay up and check out the flow for tucker. Some floatant for the fly, Mucilin for the 3m leader and last section of the fly line, and the stage is set for some dry fly work. Don’t go overboard on the leader tippet, as 2 or 3kg is fine for most upcountry work on trout.

Wet flies are also quite effective in all New England streams, and if I had to nominate one really effective general purpose wet fly, it would naturally be the Woolly Bugger, size 8 or 10, and in olive, brown or black colours. When wet fly fishing, there’s no need to change to a sinking fly line, as the Woolly can be used quite effectively by removing the floatant Mucilin from the 3m leader by rubbing a bit of mud on it to help it sink.

Understandably, wet flies are worked entirely differently to dry flies. Dries are cast gently upstream, to ensure they float naturally, and are allowed to drift back while slack is carefully gathered. When the fly disappears with a tiny disturbance, a quick lift of the rod will set the hook!

With a wet fly on the tippet, the idea is to cast the fly upstream and land it somewhat less gently than the dry fly. This might seem a bit odd, but the idea is to break the stream’s surface tension, sinking the fly rapidly, and perhaps attracting a fish with the little dimple as it lands. Wet fly fishing involves feeling the ‘take’ of the fly rather than seeing it disappear, and can be pretty exciting. In truth, when there’s not much sign of any surface activity, I usually put on an olive Woolly Bugger and prospect the water for the sheer enjoyment of it. I catch fish too!

As an extra bit of enjoyment, sub-surface flies such as black beetles, bunny fur leeches and larger brown or black nymphs on size 10 or 8 hooks can be used in lieu of the Woolly Bugger. Sometimes trout are fussy little rascals and a change of fly can make a big difference to a day’s fishing.

Lure or Plastic
There are a lot of trout taken on hardbodied lures, spinners and soft plastics, but it’s smart to remember that these fish eat a lot of small things, so keep offerings down-sized for best success. I have a personal rule that if the plastic or lure is larger than 6cm, it’s getting towards too large. With lures, less is more.

Small lures won’t go very far on heavy line, so 2kg fluorocarbon or braid on a fine, soft-tipped spin rod does the trick nicely. Just be aware that the combination of lures with sticky sharp treble hooks and a soft meshed landing net can be fatal to trout. By the time the lure is removed from the fish and net, the trout may be gasping its last. It’s far wiser to remove the treble and replace it with a single hook of similar size if you intend to catch and release.

Last things
New England at this time of year is mighty cold at night, and frosty mornings are to be expected, so make sure to take plenty of warm clothing. Many streams will have bogs around them, so thigh waders or gum boots are handy to keep the feet dry.

There are numerous streamside reserves where camping is fine, usually TSRs, and it’s a lot of fun to camp in that ultra cool climate, providing you’re set up correctly.

by Gordon MacDonald • During the cooler months, huge conglomerations of baitfish swarm along out beaches and into the estuarine systems. The abundance of species such as whitebait, herring, hardiheads, frogmouths, garfish and numerous other […]

There’s something about Yamba

by Rupe • I was talking to my wife recently about how I’d love to start taking our three young daughters to Yamba more often. Rambling about why I love the place so much, I […]