What, a fly angler about to launch into an article on vibes? Yes indeed! I am, in fact, just the right person for it, and here’s why.

A year ago I knew absolutely nothing about using vibes, but since then I’ve caught everything from bass to barra, cod and golden perch, jew to threadies, snapper and bream. Also tailor, flathead, catties… even a sole and a luderick! The fact that a vibe novice like me can catch so many fish proves that vibes definitely work well. To get you started, here is the lowdown on this interesting style of angling.

If you already have a medium spin outfit that handles plastics on 10-15kg braid, don’t rush out to buy extra gear. (Maybe later, perhaps, but not yet!) I did have some excellent plastic tackle I’d used on Bay snapper and the odd bycatch of longtail tuna so I was well set up already. If your chosen rod has a medium action, centred around mid-curve towards the tip, it should be fine.

My 3000 size reel has handled vibe fishing very well, so braid is the next consideration. I tread lightly here, preferring 15lb braid over heavier stuff simply to keep in close touch with the vibe.

The leader is quite important and needs to be tailored to the job. Bream, bass, cod, golden perch, even snapper – all can be taken with a 2m leader of 3-6kg fluorocarbon FG knotted to the braid.

If you’re targeting barra, jew and threadies there’s serious risk of line abrasion via raspy teeth or gill rakers. In this situation I recommend 1.5m of 10kg FC100 linked to the braid. Initially I complete the leader with 40cm of 20kg FC100 so the vibe won’t be chewed or rasped through when under heavy strain. Well, it still can be but the risk is minimised.

Now let’s look at some vibes, both soft and hardbodied, and believe me there are plenty to choose from! In every issue of this magazine it seems there’s another new vibe to add to the wish list. Some are much more expensive than others, but from my experience a vibe costing twice as much as another won’t necessarily work twice as well. It comes down to selecting the right vibe for the job and working it correctly.

I started with lighter soft vibes such as Jackall Masks, Transams and Quick Catch Soft Sports. Once I was fairly confident using soft vibes I switched to Quick Catch Hard Vibes, and then onto the brilliant Shads Lures Hard Vibes. There are just some of the great vibes out there; we anglers are really spoiled for choice!

Originally, I believed that the soft vibes were the way to go but having taken quite a few fish on hardbodied vibes I now use either style with confidence. I rely on the lighter 20g vibes for areas of less current or less depth, and the heavier ones when there’s a combination of current and depth as we see in the Brisbane River.

When you’re selecting a vibe that’s within your chosen price range, take a close look at the lure when it’s out of the box. The hooks should be sticky sharp and unlikely to foul on each other, and for best action there needs to be a split ring. If the lure doesn’t have a split ring, fit one – or use a Mustad Fastach connector.

Interestingly, there’s no better way of assessing a vibe’s action than by trying it out in a swimming pool. This is how I cottoned onto the need for a split ring as well as assessing how rapidly different vibes wriggle on an upward lift. Swimming a vibe in the pool also lets you observe its action as it falls. This is important because a lot of fish hit the lure on the drop.

The actual method of fishing the chosen vibe will depend upon the water depth and the sort of bottom being fished. There’s little profit in dropping a $30 vibe down onto very rough ground. Getting snagged up is a matter of when, not if.

On the other hand, if you can keep the vibe just clear of rough ground it’s a great fishing situation. The trick is to count down for one drop with the hooks rubber banded together to prevent snagging. Once you know how long it takes to get to the bottom, you can remove the rubber band and deploy the vibe with less drop time, and keep the vibe just off the bottom while it’s being worked. Jew, snapper, big bream and cod all are likely targets in this situation. 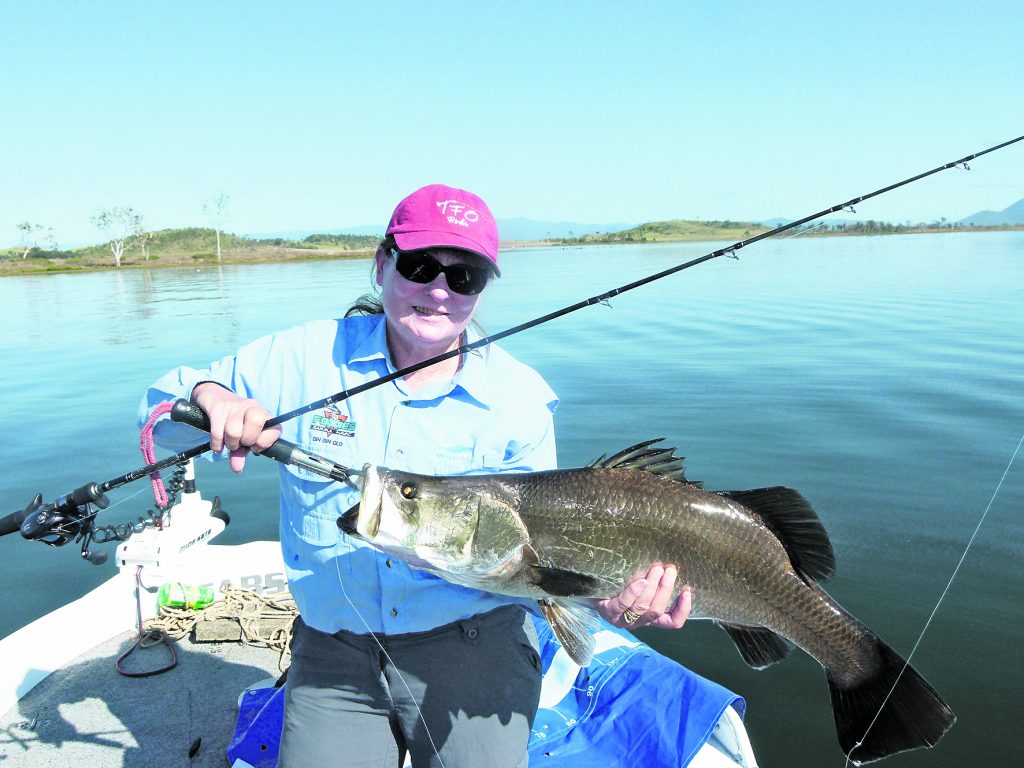 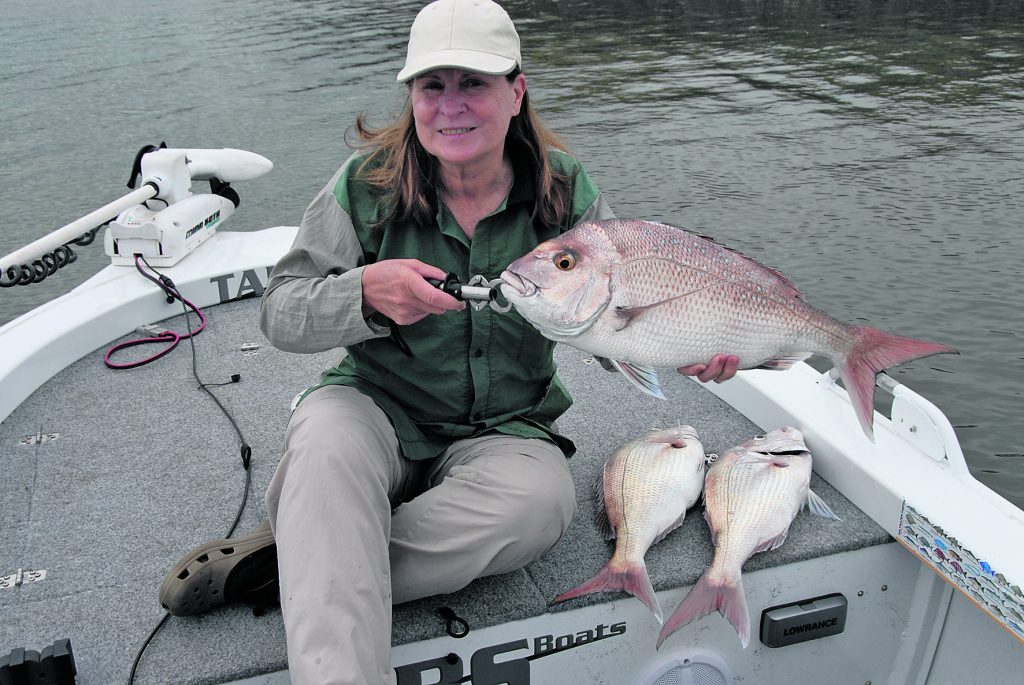 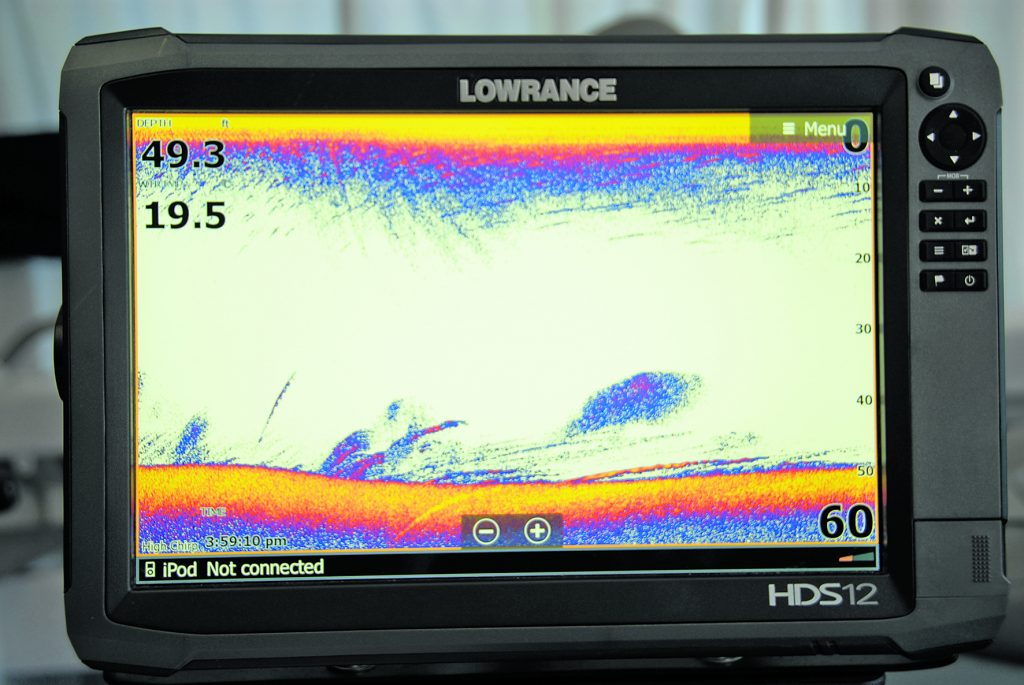 A sight to please any vibe angler: bait school plus fish (likely threadies) on the sounder. 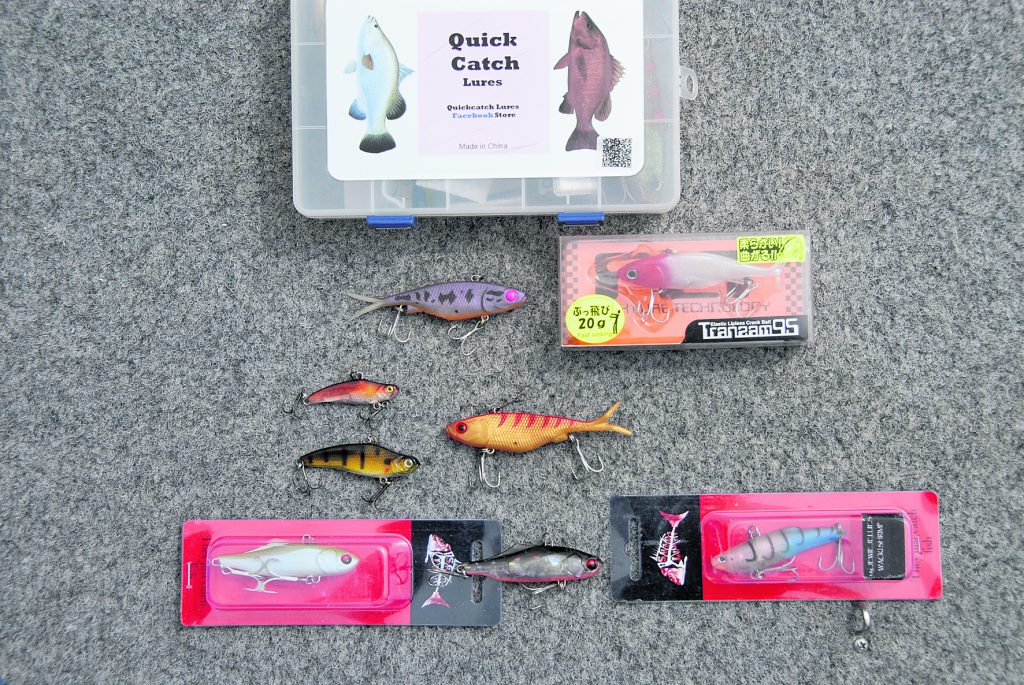 A tiny selection of the soft and hard vibes on the market. Under the Quick Catch box there’s a pair of Transams, some hard and soft Quick Catch models, and Shads Lures Jew Fish Candys on the bottom. 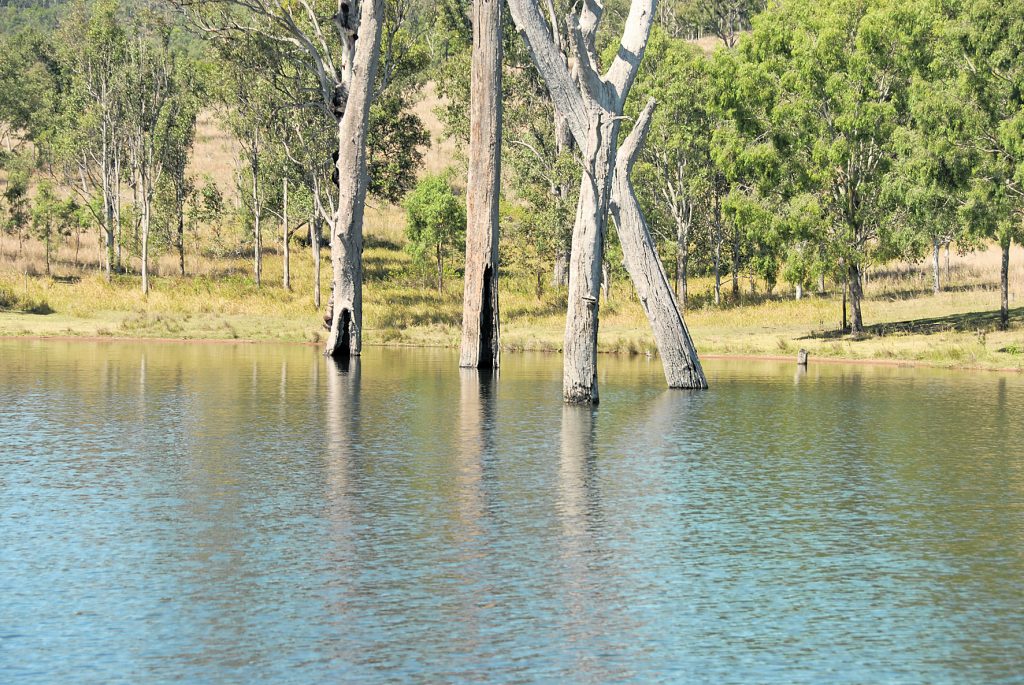 A Somerset Dam scenario: a trio of trees perfect for dropping a vibe close by and working slowly back. 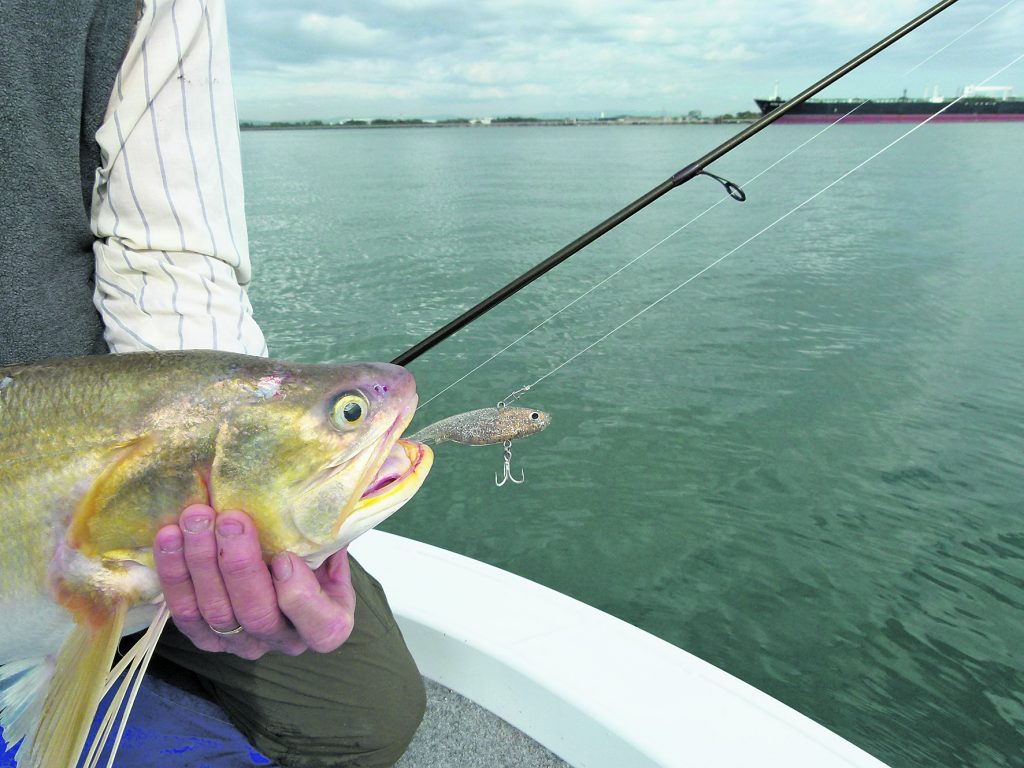 Soft vibes work well on threadfin and many other fish. It comes down to patience and perseverance to get the technique right.

In a bass impoundment, a good size vibe is 6.5-10cm. Cast it to a likely looking feature such as a tree, then allow it to sink almost to the bottom before slowly hopping it back to the boat. Allow a small pause between reel turns and rod tip action. Watch the braid carefully because any tightening will indicate that a fish has hit the vibe.

Naturally, if you spot a school of bass under the boat it’s fine to simply flutter the vibe very slowly in amongst the fish until you get a taker. Alternatively, if you see only a few on a flat there’s nothing wrong with a long cast, a pause until you hit the bottom and then working the vibe back slowly and gently until it’s fully retrieved. Sometimes repetitive casts are required, but if the fish are on the job it shouldn’t be long before you get a strike.

Barra in the briny, especially in rivers, can be taken by casting to features, working on or just off the bottom to fish spotted on the sounder, or by slowly yo-yoing the vibe around standing timber and the like. Impoundment barra are much the same, and it’s a good idea to work around shallower areas where feeding fish are likely to be found. When it comes to those enticingly large fish seen on the bottom in our impoundments, it’s often hard to get them to bite on anything, vibes included. However, barra holding deep next to standing timber can often oblige with a savage bite. Barra everywhere are fairly unpredictable, which makes catching one all the more rewarding.

For mine, one of the glamour fish for vibe work is the good old king threadfin salmon. These fish will take both soft and hardbodied vibes when in the mood. (Note: they are NOT always in the mood!) They show up well on the sounder, and one you’ve spotted them then a matter of trial and error to get things right and entice a bite.

The threadies in the lower Brisbane River are prime examples. Usually holding at least 15m deep, sometimes schooled (not so much these days because they have been hammered by commercial netters) they are usually seen almost on the bottom and the vibe needs to be right on their fat little noses to succeed. After that it comes down to an exact method of retrieve and drop to coax an enquiry.

When choosing a vibe it pays to consider the tidal flow. In the Brisbane River it seldom stops entirely, and I usually tailor the weight of my lure to counter the current. In current that’s expected to become less strong with the passing of time I might opt for a for a soft vibe such as a 20g job. However, when the current is only going to make itself felt or I’m feeling a bit impatient at having to wait until a lighter vibe gets right down to the fish, I like to use a Shad 30g Jew Candy. They drop quickly, vibrate very well and work on threadies, mulloway and other fish quite well. In fact, I’ve caught a luderick on one and that’s right out of left field.

No matter what vibe you use, don’t work it over enthusiastically in a really quick retrieve or fast up-and-down motion. Threadies are casual biters and just don’t warm to these tactics. The fish will likely be attracted to the vibe as it moves more gently (on a high end sounder such as the Lowrance HDS Gen 3 you will see all this in Sonar mode). Stick with a lift of about 44-45cm with just enough speed to feel the vibe flutter. Then, by ensuring that all slack is out of the braid by maintaining the correct rod angle, you lower the vibe rather than drop it back down.

Sometimes the fish will grab the vibe on the lift but most often it’s as the lure is being lowered. By watching slack very carefully as the vibe heads towards the bottom it’s easy to detect a bite by the sudden uptake of braid. A sharp lift of the rod will see the fun begin.

In that depth of water, which will usually be moving, a bite can be more of a slight pick or mumble rather than anything definite. However, once a thready is hooked there’s no mistaking the sheer strength and series of hard runs that characterise these highly valued sportfish.

Bring on the bycatch!

Mulloway exhibit the same sort of bite at times. And let’s not forget that another gratefully received bycatch from the Brisbane will be snapper. If you see bait schools on the sounder, stick with that bait and give the area your best shot because all of these great eaters will hang around the bait and can be targeted with vibes, either soft or hardbodied.

So set up some vibes, make sure all your knots are as good as possible and give it a go. If I can get the knack of this fun and interesting style of fishing, so can you!

Get ready for south Queensland bass

by Wayne Kampe • Cooling weather and shorter days means that bass are following their age-old breeding patterns and getting together in big numbers to do what comes naturally. Being totally freshwater though, these fish […]

by Toby Grundy • Lake Burley Griffin is an incredibly consistent fishery where golden perch, Murray cod and redfin can be caught all year round in good numbers. This is especially true for those who […]

Back to Basics: Left verses right

by Steve ‘Starlo’ Starling • It’s an argument almost as old as fishing itself: which hand should you crank your reel with? You might never have realised it, but almost every spinning reel or ‘eggbeater’ […]