The cold weather has started dissipate, and the trout are starting to fire as they feed up after breeding. This makes for some exciting fishing. This season is shaping up to be a cracker on the trout front, and with many locations set to fire I can’t help wanting to share a few of my favorite locations across Victoria that I’ll be spending some time this trout season.

NorthEast Rivers
There is a plethora of high country rivers in the states northeast that hold some great populations of self-sustaining brown and rainbow trout. Starting from the upper Yarra, to the upper reaches of the Goulburn basin, all the way to the upper Ovens and King rivers, then all the way over to the Nariel and upper Murray basin, there are wild populations of trout.

It’s just a matter of finding a clear flowing stretch of water in these systems and trying your luck. What the fish lack in size they make up for in their willingness to eat a small lure or fly; this makes for some exciting angling. Just before and after the closed season are ideal times to target these rivers. Walking the upper Ovens, Nariel and Goulburn rivers flicking small spinners is my favourite way to tangle with these river fish.

Crater lakes
Bullen Merri and Purrumbete are undoubtedly some of the biggest names in Victorian trout fishing and for good reason. Large trout are caught in these lakes regularly. Purrumbete was a consistent producer of 4kg+ brown trout last year and if the same class of browns poke their heads up in spring again this year, it will make for some of the largest brown trout angling seen here in Victoria. This is exciting for anglers looking to crack the magical 10lb mark, as many did last season at Purrumbete.

These browns are smart, so don’t expect to catch them regularly. If you do manage to snag one, it will make all the donut sessions worthwhile. Casting minnow pattern hardbodies or plastics at feeding fish on early mornings or late afternoons is most effective, however trolling is also worth a shot. Lake Bullen Merri is set to produce some fat rainbow trout and Chinook salmon with the best results coming from trolling the lakes edges or on a downrigger. 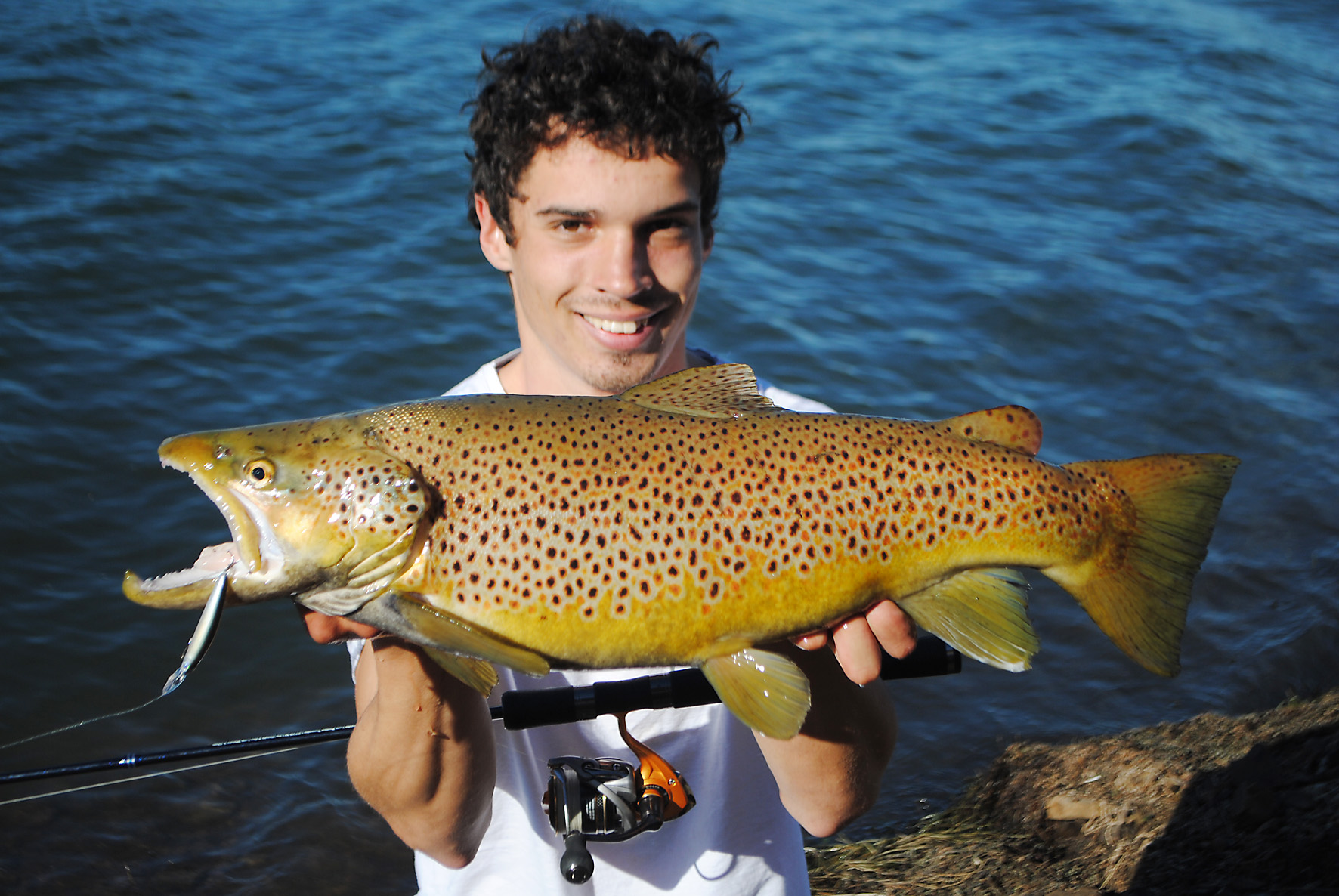 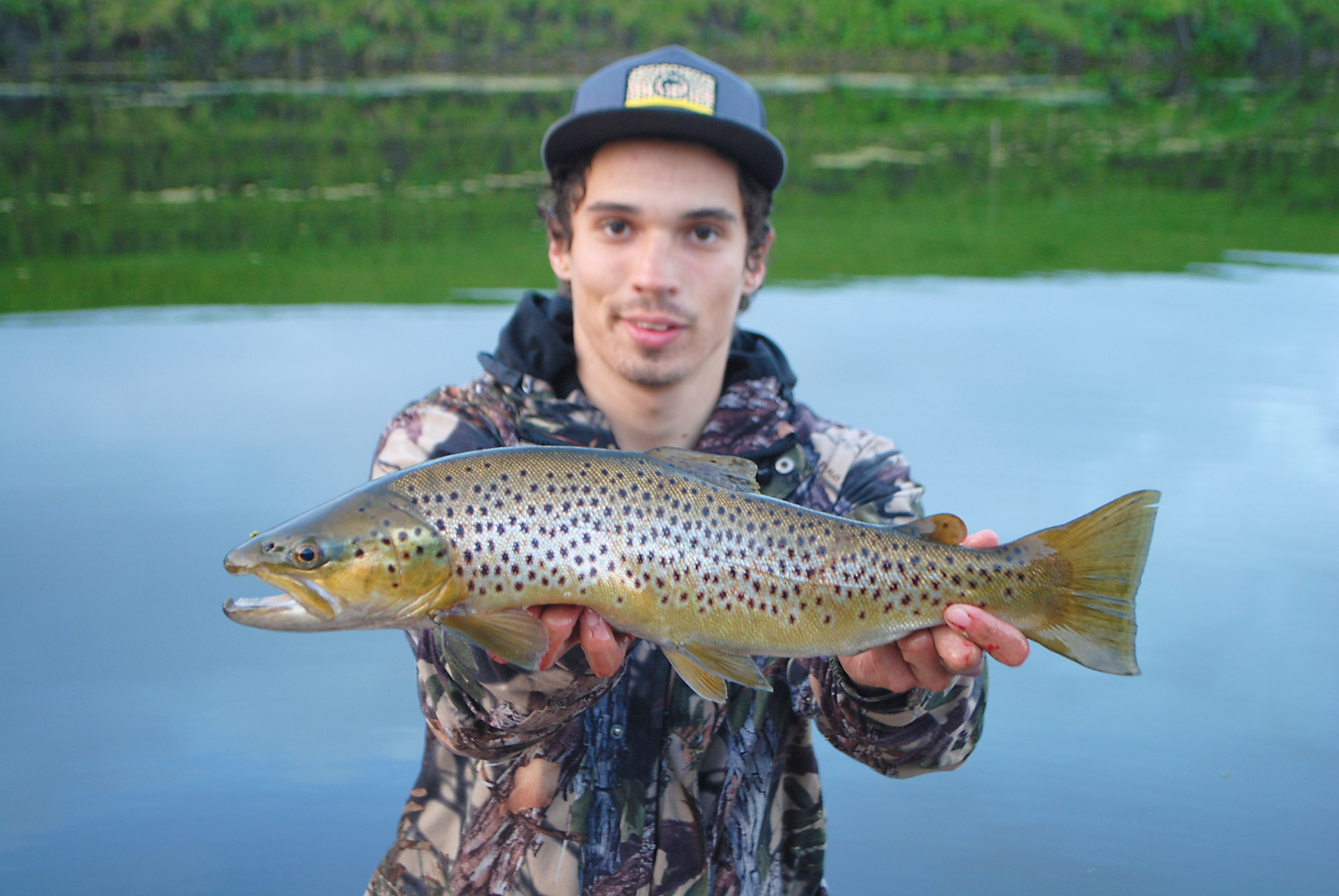 An average-size brown trout from the southwest rivers. 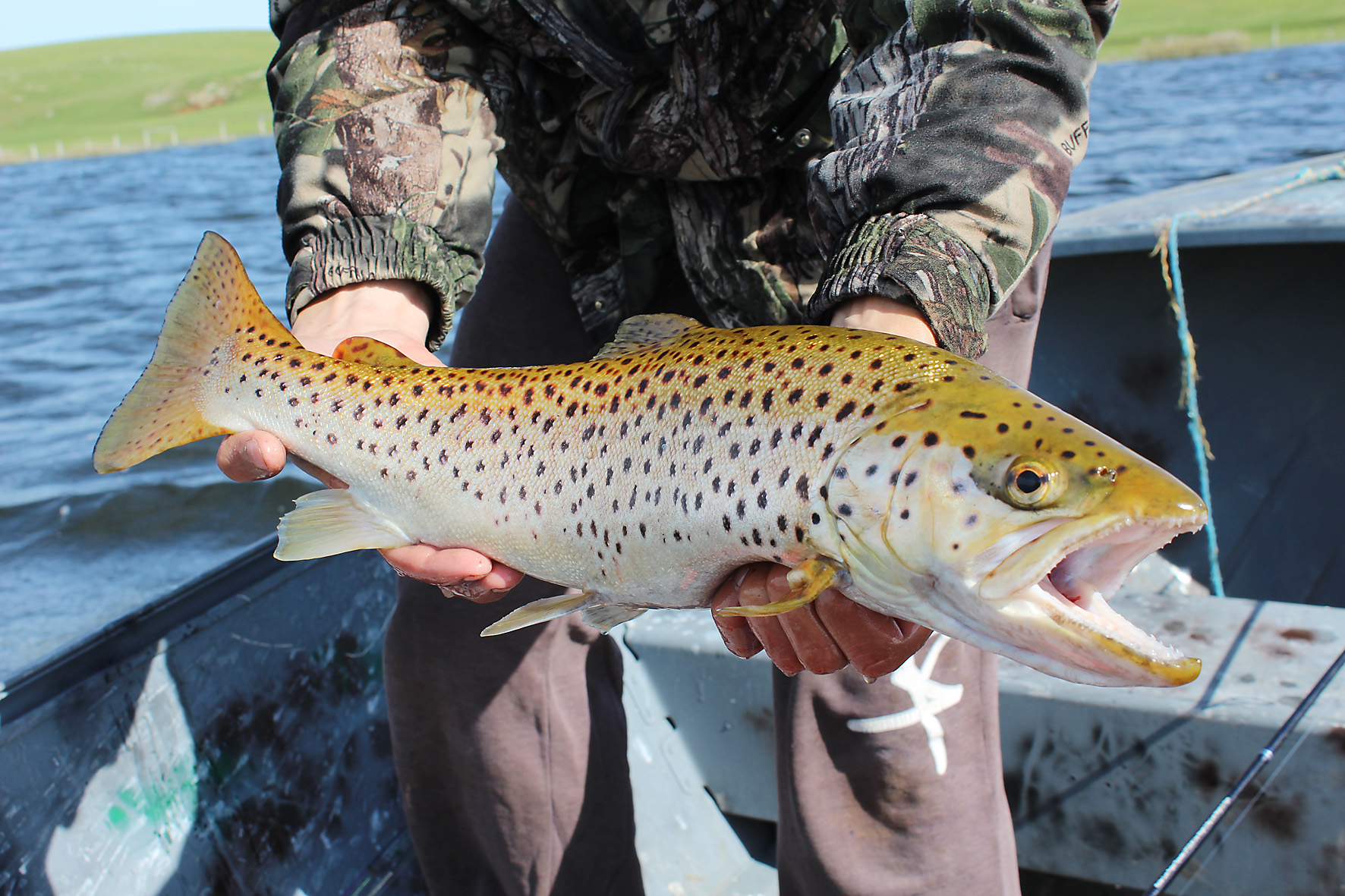 There are plenty of trout this size on offer over the cooler months. 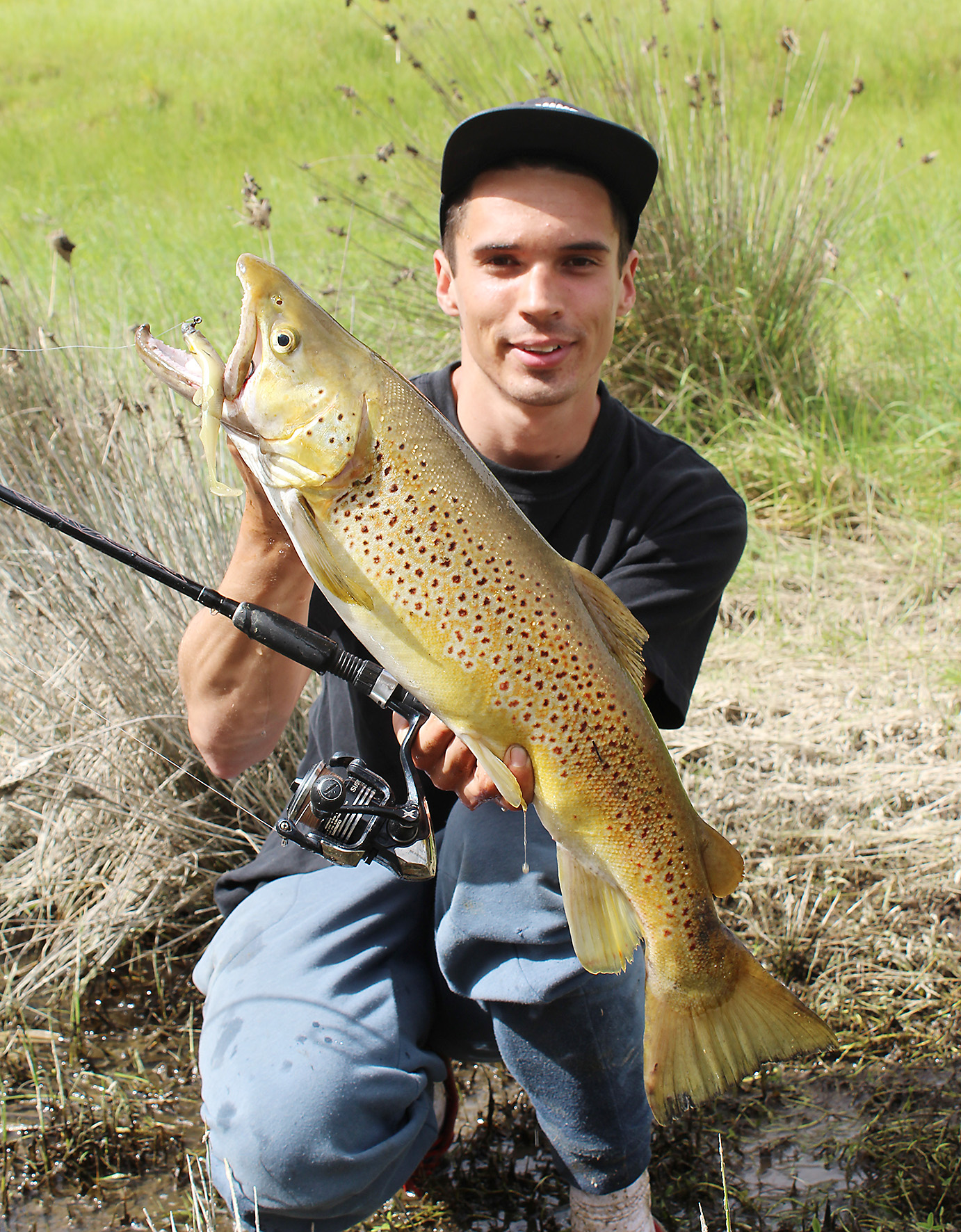 The southwest Victorian rivers are home to some cracking brown trout. 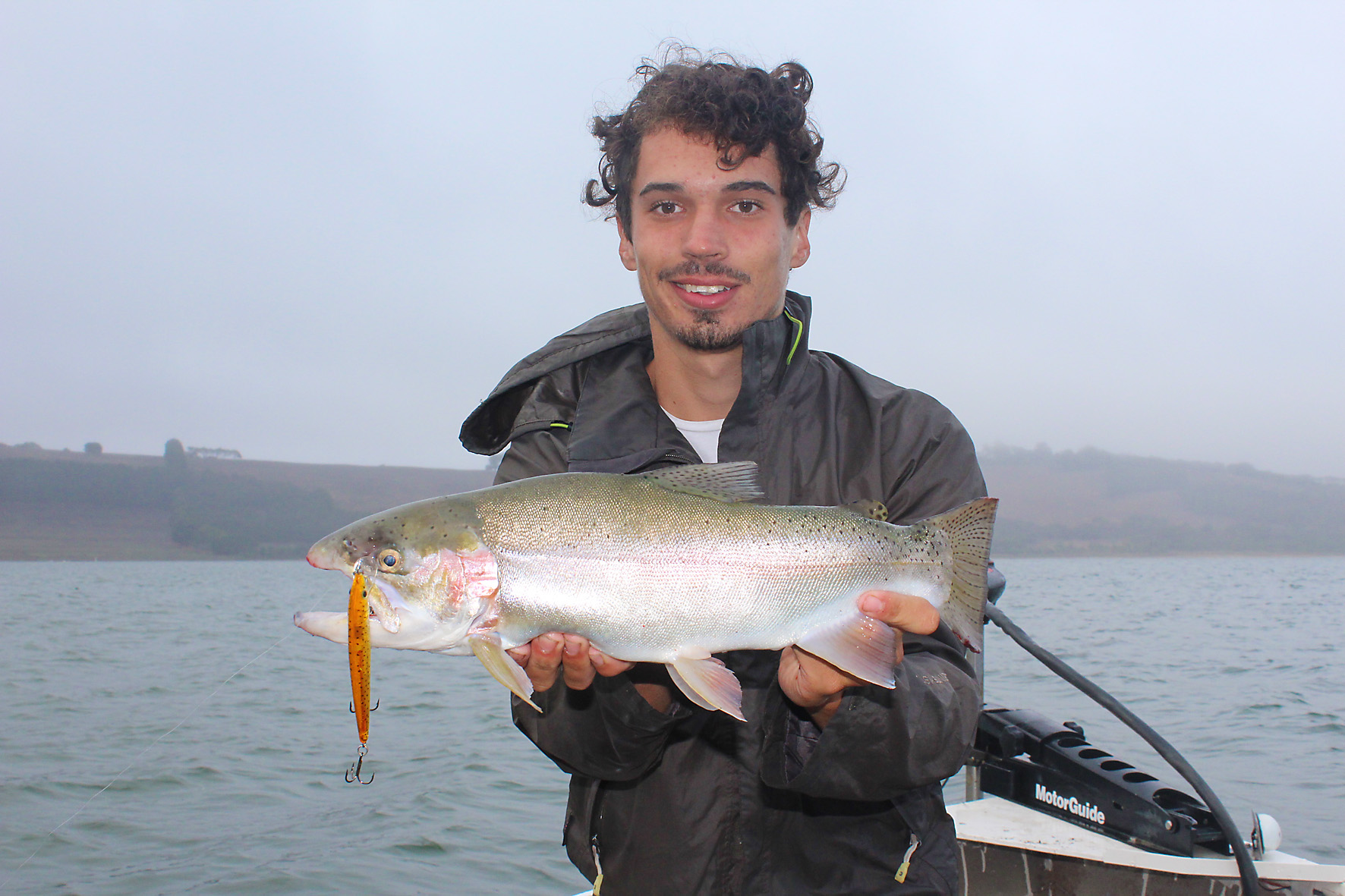 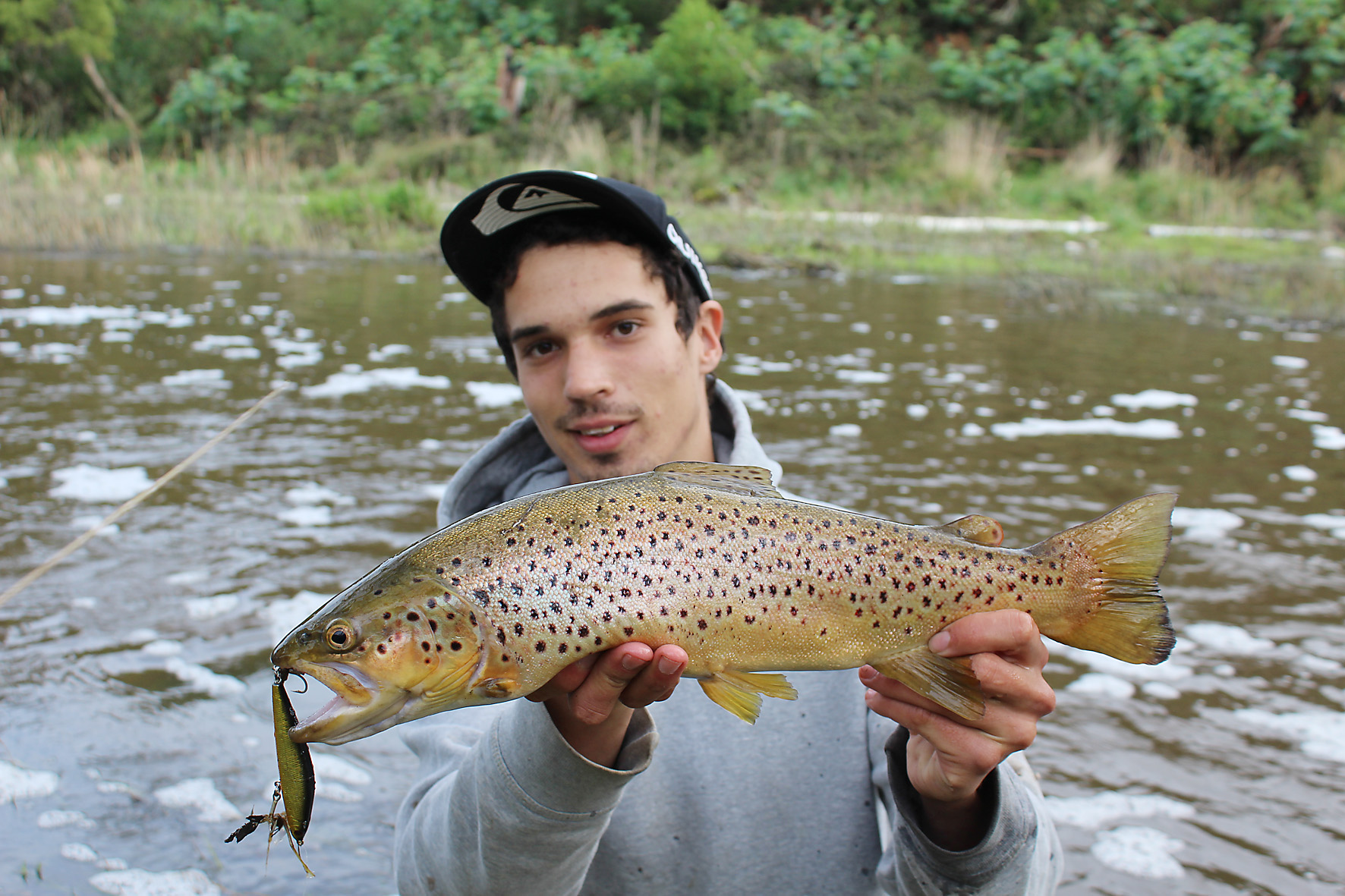 A Hopkins River brown trout taken on a hardbody lure. 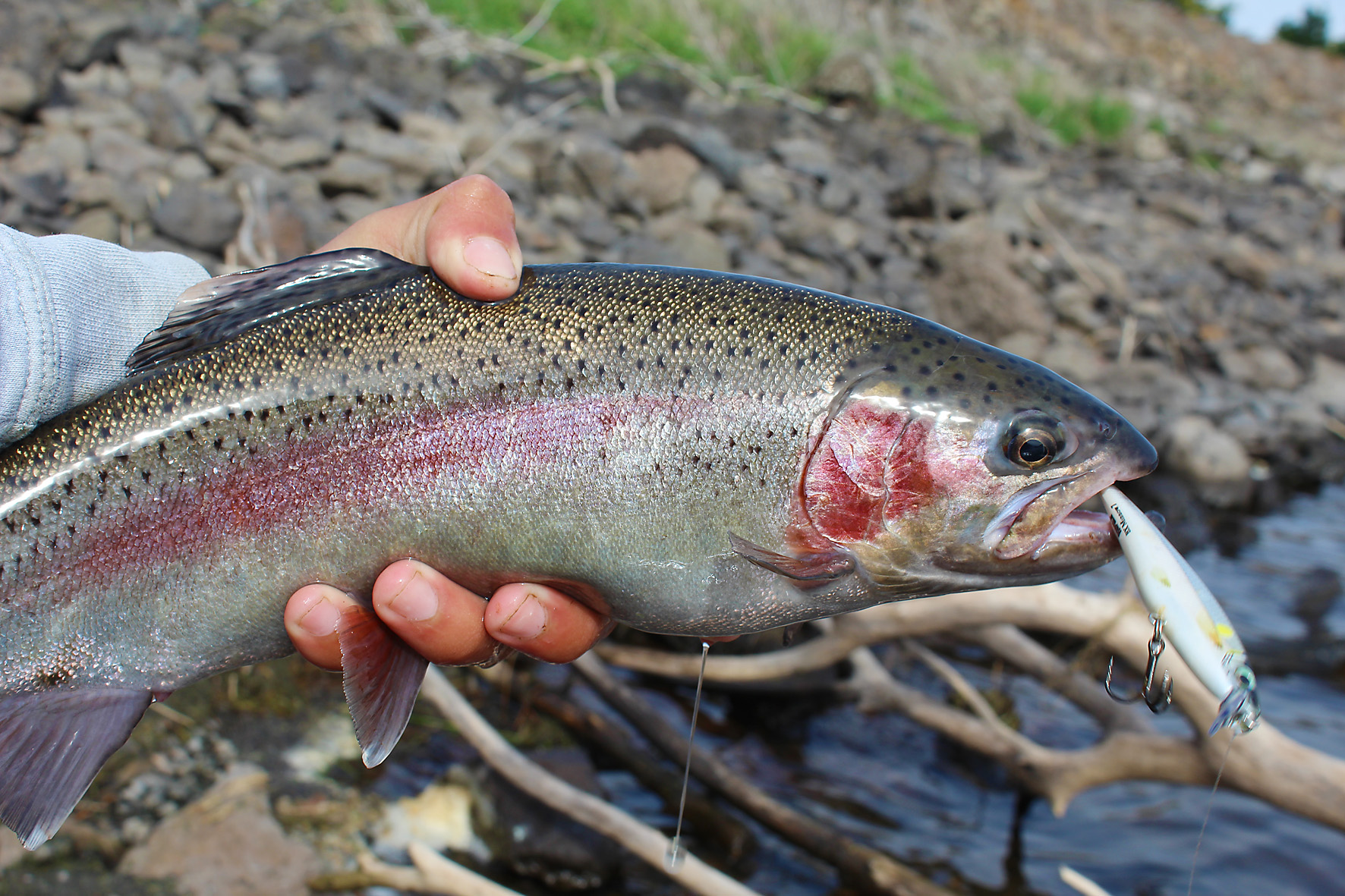 Many of Victoria's stocked lakes are now fishing great for 1kg rainbow trout.

South West Rivers
At the moment it looks like we are set for the first season in history where Victoria’s South West rivers will have some of the closed season laws lifted, allowing year-round trout fishing to occur on these great rivers. The rivers show very minimal if any natural breeding of trout and rely on the yearly stockings by fisheries to sustain their populations. It makes perfect sense that if the trout aren’t breeding, they don’t need to be protected over a breeding phase.

I am personally stoked about this decision as it means I can now target my local rivers during the peak trout season. This will make for some great fishing and mean that the fish that are stocked in the rivers to be caught can be caught! This hasn’t been formally announced by Fisheries Victoria, so I eagerly await the media release explaining these new rules that should be just around the corner! When referring to the South West Rivers I’m talking about that of the Hopkins, Merri and Moyne rivers.

These rivers are widely known for holding great numbers of brown trout, and with average size up around 1.5-2kg with a big one being over 3kg, they are some of the best quality river fish Victoria has to offer. Walking the banks of these rivers casting soft plastics of minnow style divers in the deep pools produces most fish during periods of clear water. While during periods of increased flow and dirty water, targeting the runs with floating minnows is effective, as the fish move into the runs looking for food. Flyfishing these rivers is also effective with stick caddis and shrimp pattern flies during periods of clear water.

Central highlands lakes
Moorabool reservoir, Lake Wendouree and Tullaroop Reservoir are my picks when it comes to the Ballarat district lakes, but it really is just personal preference, as Newlyns, Hepburn Lagoon, Bostock and many others are also great fisheries. These lakes come alive over winter as the fish patrol the edges smelting on minnows and eating mudeyes. These lakes are known to hold some thumping big trout and fish over the 3kg mark are common.

Fooling these big fish can be tricky at the best of times. The best results come from casting lures such as hardbody minnows, soft plastics or Tassie Devils, while mudeyes under bubble floats will bring the best results for bait fishers. Try fishing a section of water that has some depth and is in close proximity of shallow flats or weed beds, as the fish often patrol these edges.

Western lakes
Following the wet winter of 2016, many of our state’s rivers and lakes are looking as healthy as ever for spring. The rain filled many of the lakes to near capacity and the freshly-flooded ground provided plenty of food and habitat for the recently stocked trout of 2016 and 2017. This is perfect news for the Victorian trout angler and means there will be plenty of lakes and rivers with high levels of water just bursting with fat, angry stocked browns and rainbows.

Combine these fish with the bigger resident trout that were stocked in previous years before the rain and we are set for a bumper season that should resemble the great fishing we had in 2012, following the 2010-11 drought-breaking rains. Those trips to Tooliorook, Toolondo, Deep Lake and Lake Bolac produced some of the best trout fishing I can recall. The great news is that these lakes and many others in the state’s west are now back on the map after rain and stockings from Fisheries Victoria. The hard part will be picking which one will fire for the coming season, but the only way to find out will be to get out there and give them a try!

As with the majority of trout fishing, a light 1-4kg spin rod matched with a 2500 spin reel will be perfect for all these locations. A tackle box with an array of lures is also ideal. A mixture of spoons, divers, soft plastics, spinners and winged lures is great. Having an array of lures will help you find what the fish are feeding on, as some days they follow one lure to the bank, but eat another. If you do find yourself getting follows from trout, try a couple different lures, find what’s working and stick with that. Spool your spin combo with 6-10lb braid as a main line and an 8-12lb leader, and this will put you in with the best chance of landing those big brown trout.

That’s my wrap-up for this trout season and some of the hotspots I will be having a fish at over the next few months. Each location has its own strong points and all are worth a shot this year! Hopefully they produce great fishing and I’ll see you on the water.

by Peter Jung • East Gippsland is full of great holiday destinations that have a fishing twist. One such locale is Marlo and the Cape Conran coastal area, which is a short drive via the […]

by Jamison Godfrey • You can’t beat this time of year for some wild trout fishing. The fish are looking up for a feed regularly with the warm northerlies pushing trout into the wind lanes […]