We love the opportunity to do a bit of head-to-head testing at Fishing Monthly. It puts us in the same position as a customer – what’s the best product for me and my application?

We had the opportunity recently to take a couple of the smallest Bar Crusher boats for a drive on a wild and woolly day on Western Port; the cabin (C) and open version (WR) of the 490 hull.

Apart from being able to check out the features and performance of these hulls, it was great to be able to spend some time with Mr Bar Crusher – Peter Cleland – to hear first-hand some of the history and theory behind the brand. You can hear a full interview by scanning the QR code in this article with your smartphone.

All of the Gen 2 Bar Crushers work on a standard theory. A Delta Flare planing plank holds a water ballast feature. This sub-floor tank fills up at rest, dropping the chines lower into the water and making the boat more stable. It also allows the hulls to be built with a deeper vee in them, dealing with the perennial plate boat problem of ‘banging’ in the rough water.

And test that feature we did on the test day. Confronted by a nasty 20-25 knot sou’westerly we took the pair on a decent run through sheltered and open parts of the estuary. 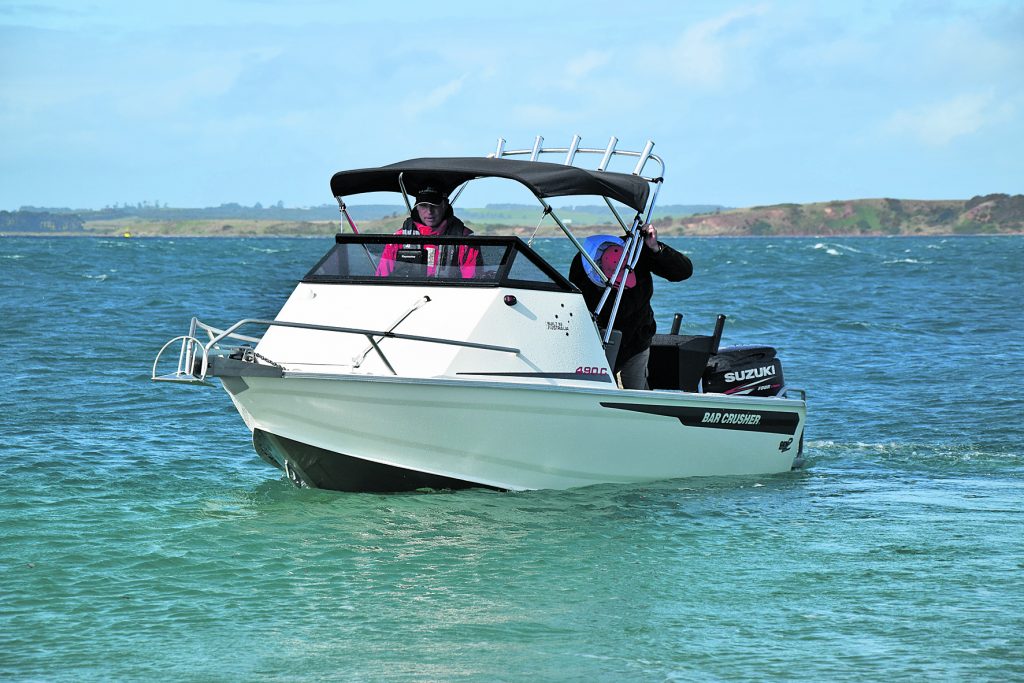 The super-structure of the Cabin model folds down from 2.1m to 1.8m in height, allowing you to fit this boat into a smaller garage. A single axle trailer helps manoeuvrability. 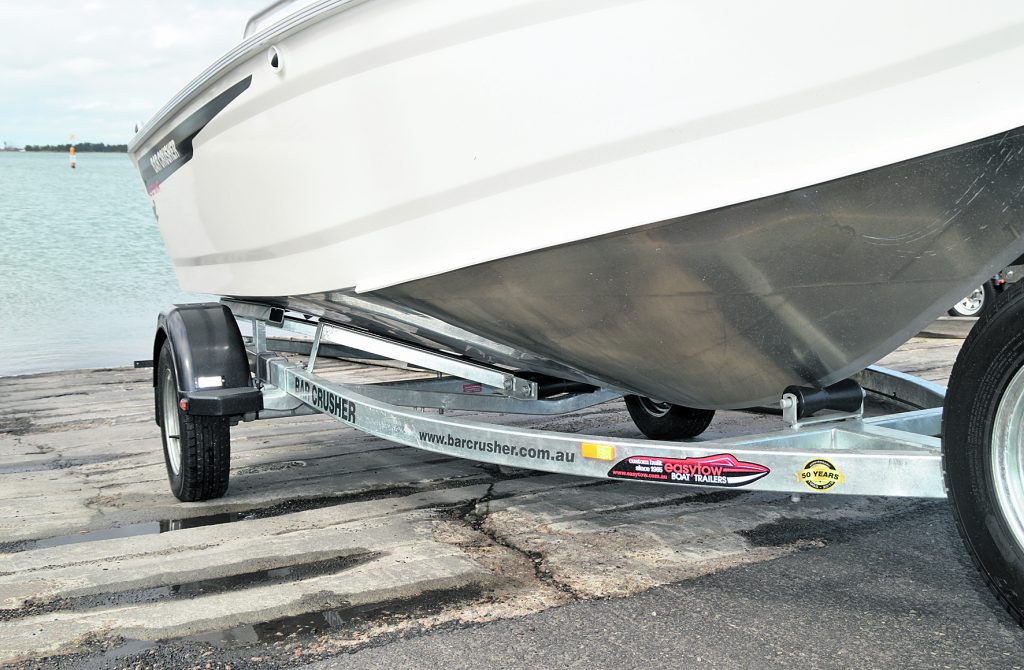 There’s the vee. In practice, it takes the bang out of landing in big chop. We tested this point around 4,000 times on the test day on a gnarly Western Port. All Bar Crushers are supplied on quality, Australian-made Easytow trailers. 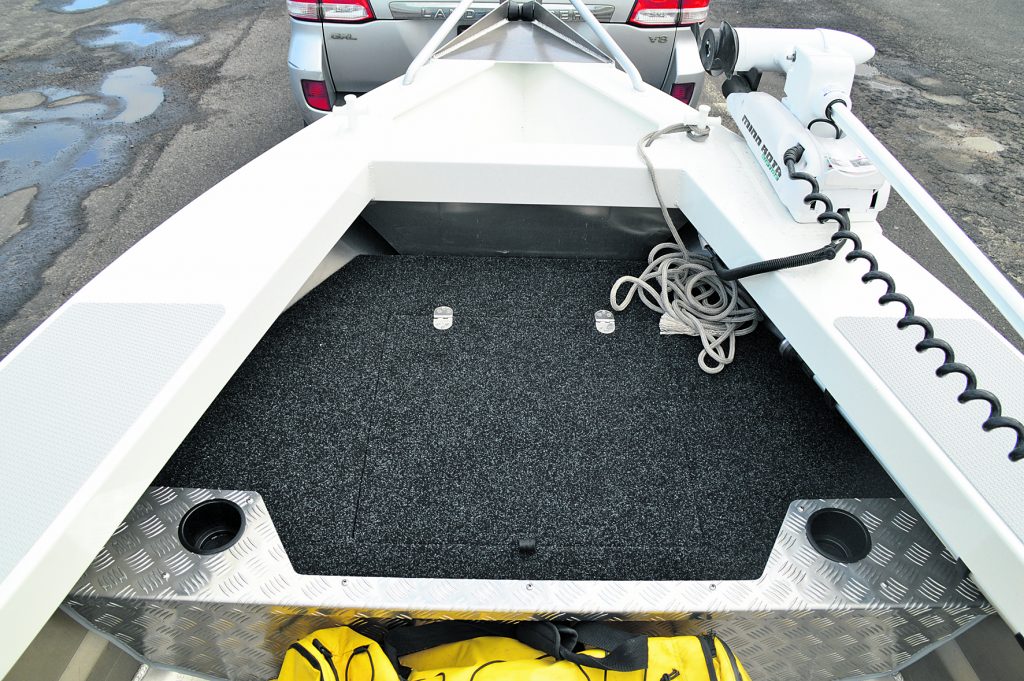 This is where all the serious work gets done on the WR model. Comfortable for one person throwing a lure with the offset electric motor mount. Non-skid on the gunwales means that if you’re nimble, then it’s pretty easy to jump up and get a better angle on the fish. 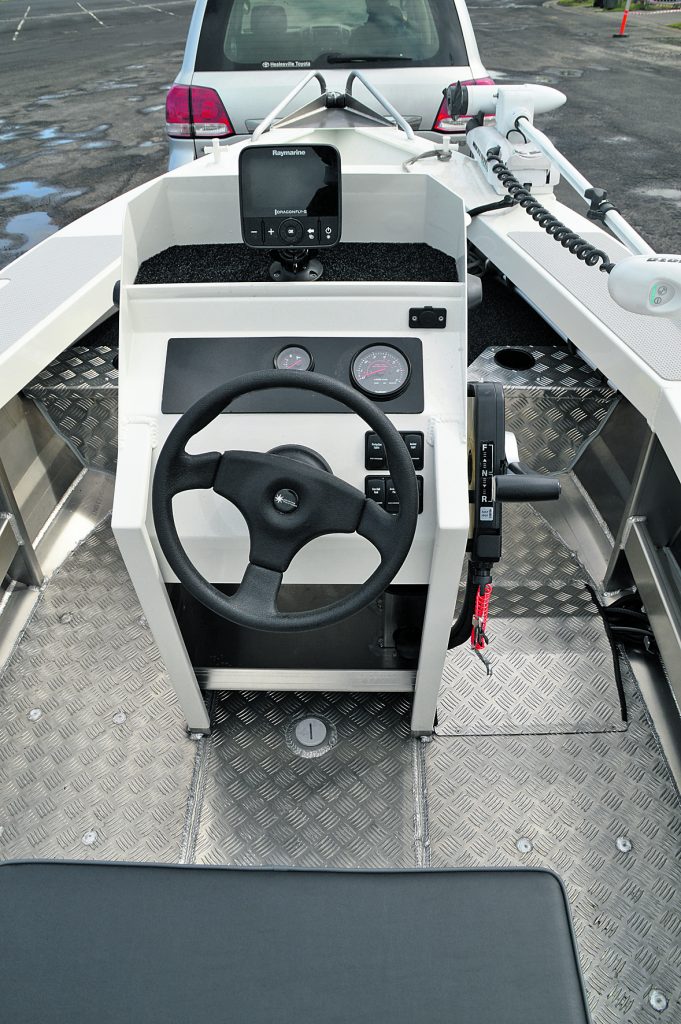 By necessity, the 490WR’s console is compact. It does need a handle for the passenger while running, however we think that the Bar Crusher team is aware of this and are making the necessary changes. There’s no problem running a 12” unit up there. 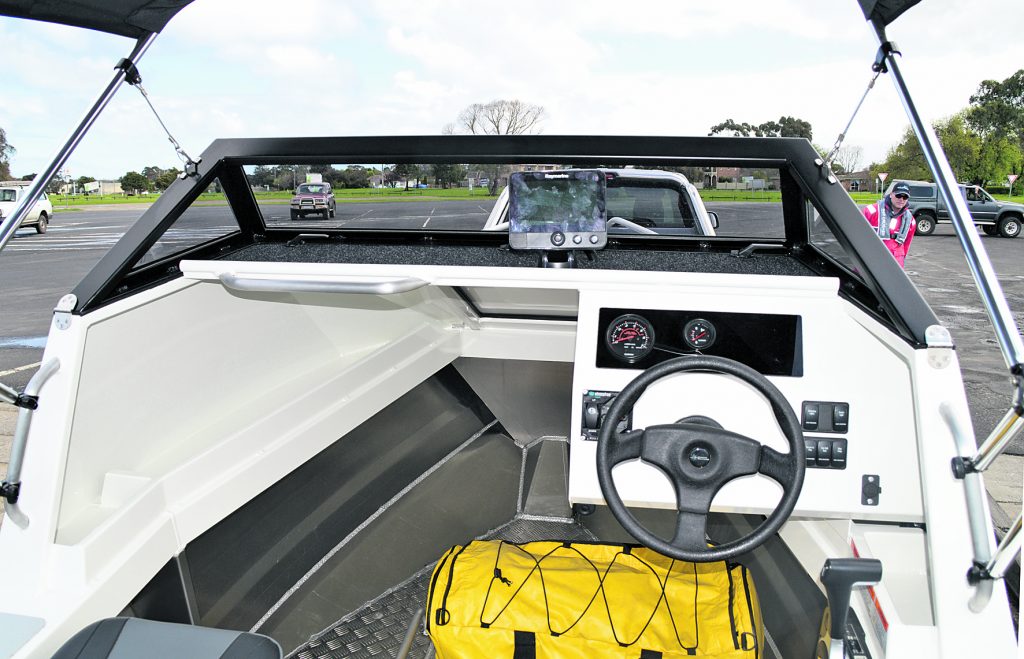 The wide dash allows the Cabin model to hold any electronics you can throw at it, while both the helm and passenger seats are designed for maximum storage and functionality. 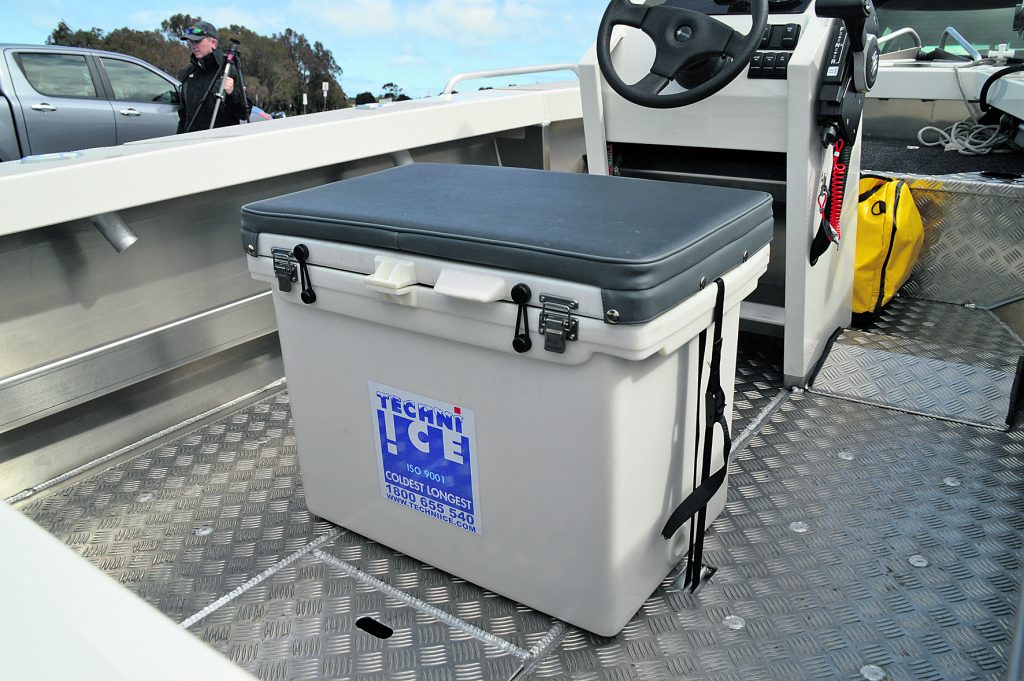 There’s nothing wrong with keeping it simple. In the WR, the icebox doubles as a seat. Added to the in-floor kill tank, it coves these smaller Bar Crushers some serious range and capacity for extended camping and fishing trips. 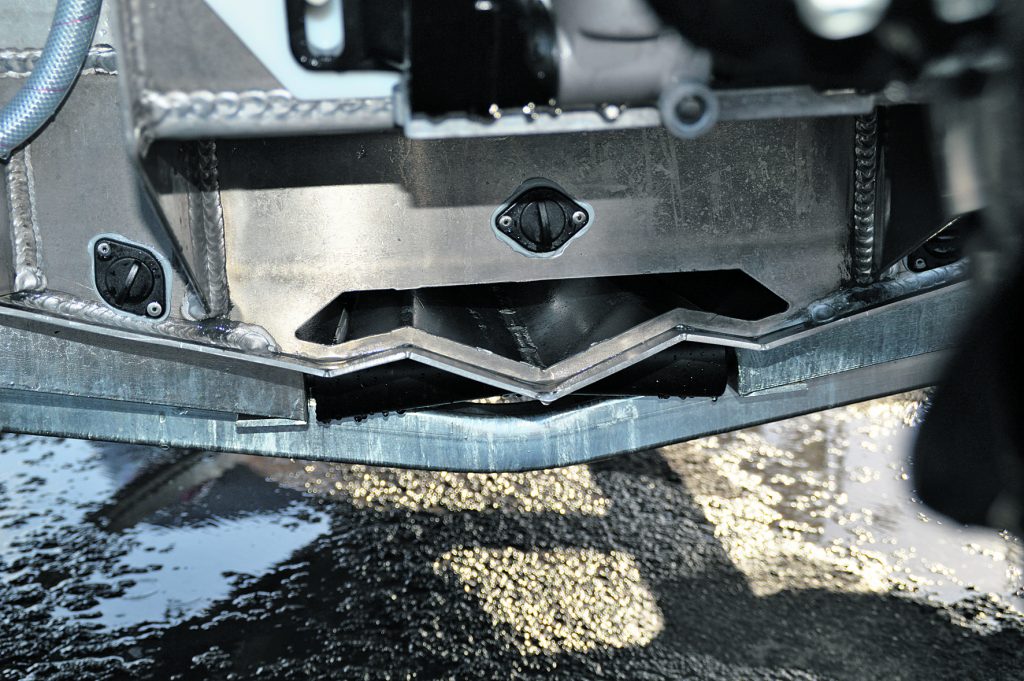 Here’s hot the water ballast system works – at rest, this cavity fills with water and lowers the chines further into the drink – making the boat more stable at rest. Underway, the water gravity-drains out. The system allows the Bar Crusher hull to carry a deeper vee then most other plate boats, resulting in a smoother ride and less banging. 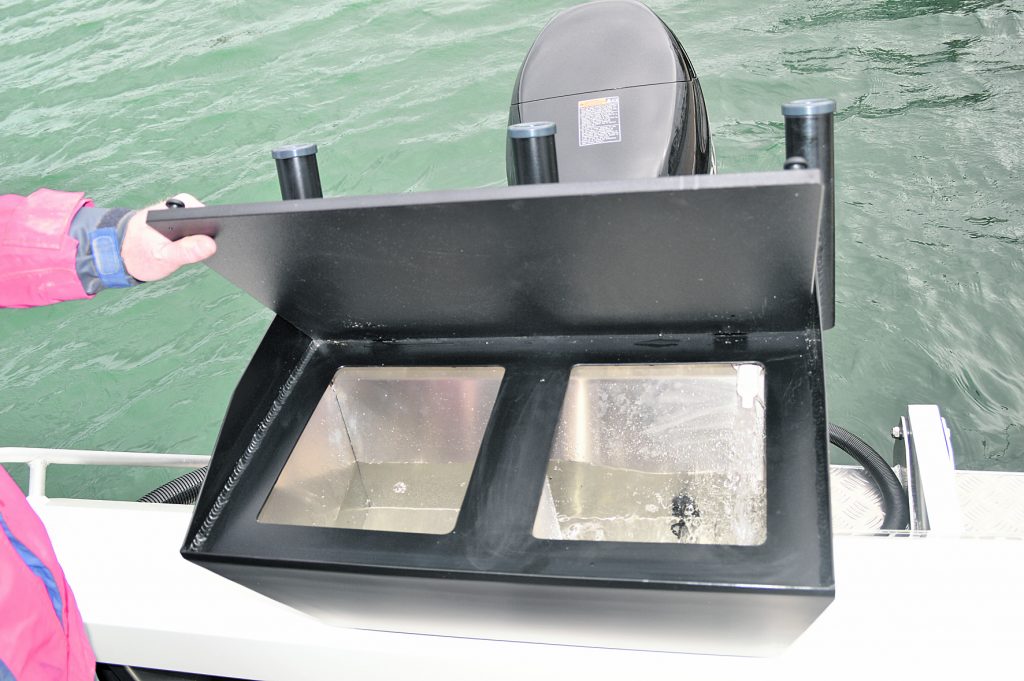 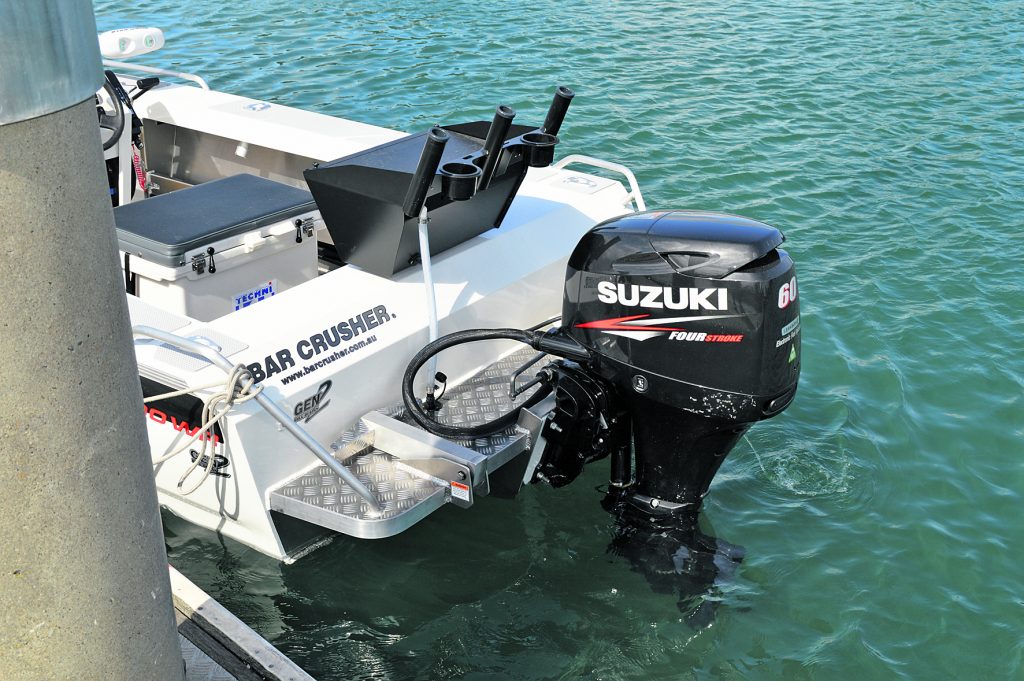 The 60hp Suzuki 4-stroke outboard is ridiculously efficient, getting up to 4km per litre of fuel burned. Both boats were fitted with identical outboards and propellers – being a 10 1/4” x 15” pitch. Revving out to 5,800rpm, the setup seems about right, maxing out at around 50-52km/h. 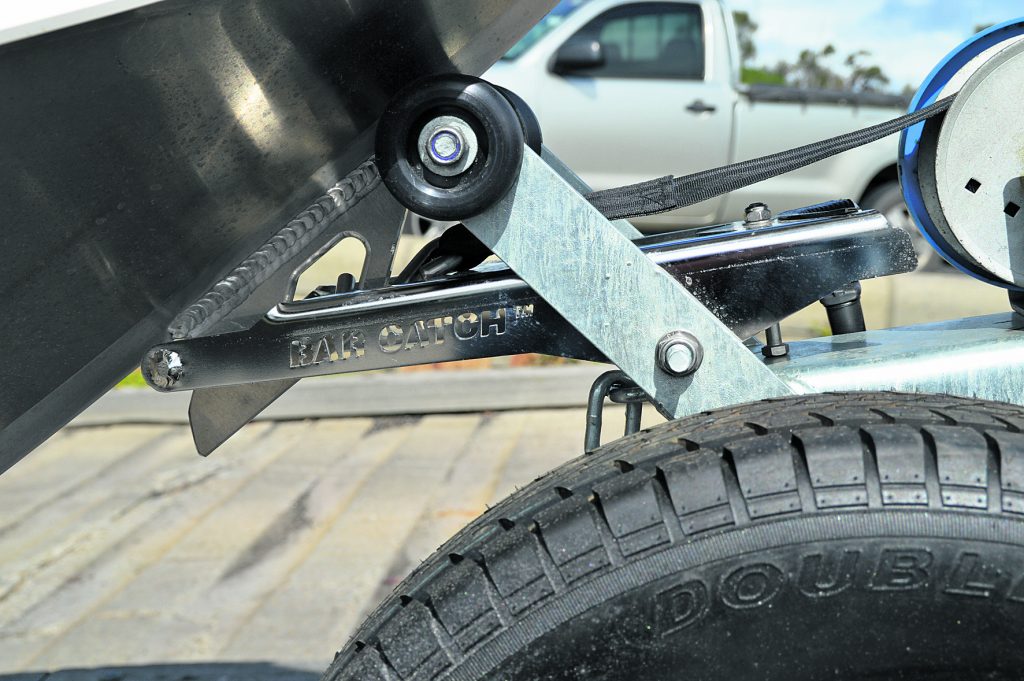 If you haven’t seen the Bar Catch system in action, you’re missing out. For two-person launching, it’s ridiculously quick and for solo launch and retrieve, it’s like having a second set of hands. Scan the QR code nearby to see it in action in the test video. 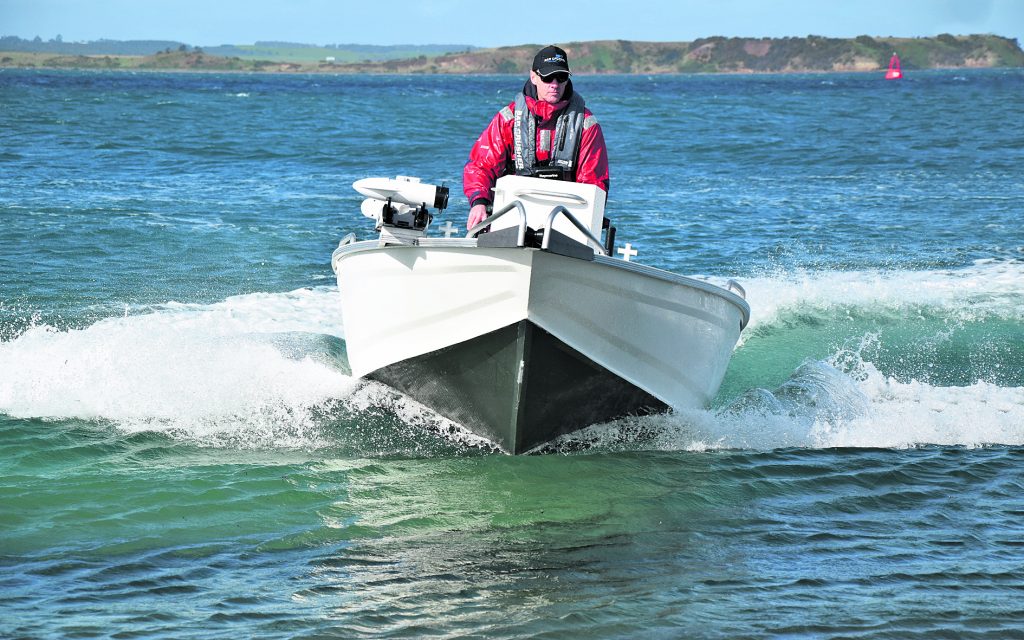 Bar Crusher’s Delta Flare planing plank and water ballast feature allow their hulls to carry a deeper vee than a standard plate boat. Here you can see how it cuts the water. 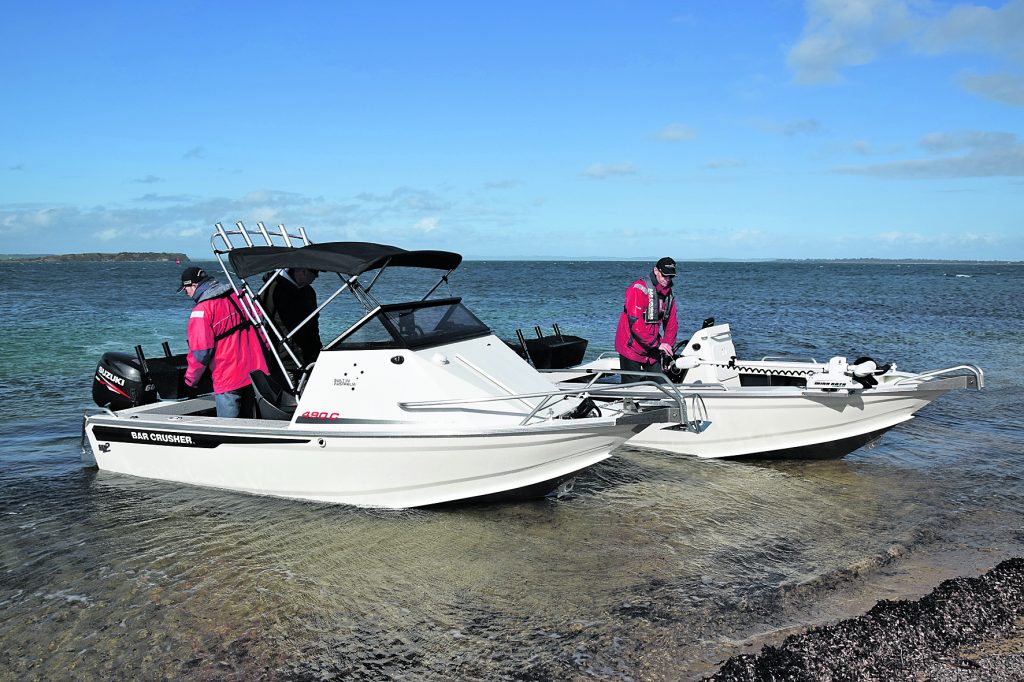 Built on the same hull, the Bar Crusher 490 C and 490 WR offers two totally different configurations that will fit on the same trailer and used with the same Suzuki 60hp outboard. Our conclusions: the WR is a boat for the north and lure casters, while the C is a boat for the bait angler and southerners – but you can make your own mind up!

My opinion? For the first part of the trip, I braced each time a pothole opened up before the WR. By the end of the run, it was business as usual – shooting the breeze with Pete Cleland as we traversed the bays and channels. The console did lack a place to hold on with your right hand, although Peter commented that he was on to that. I’m sure there will be a handle in future models.

The ride wasn’t 100% dry, though. Quartering the seas, the inevitable spray blew back across the craft. Dressed in a GoreTex rain suit, this wasn’t a problem. I’ve been to enough rodeos to know what open boats are like in nasty weather.

VFM’s Peter Jung made the trip in the Cuddy model, and arrived at the destination warm and dry.

And that’s the difference between the two boats. The Cuddy is more resistant to the weather and better set up for dropping a spread of baits, while the WR model is exposed getting there, but super efficient when the lure casting begins.

Both of the test boats were fitted with 60hp Suzuki outboards. They’re quiet, reliable and ridiculously fuel efficient, getting 4km per litre burned at 4,200rpm. That’s value for money at the petrol pump right there. Prop setups were spot on, maxing out a 5,800rpm. You can see the full performance range in the table on this page.

Both models arrived on an Australian-made Easytow trailer, single axled and fitted with Bar Crusher’s Bar Catch launch and retrieval system. This is a real time saver when it comes to getting the boat on and off the trailer. For two-person launching, it’s ridiculously quick and for solo launch and retrieve, it’s like having a second set of hands. Scan the QR code nearby to see it in action in the test video.

“Once I told a guy at a boat show that we could launch or retrieve a boat in 30 seconds. He didn’t believe us, so we made a video and could actually do it in 20,” Peter explained, proud of their invention.

“Bar Crusher is all about being the quality option in the market,” Pete explained as we ran across the bay, “We make them from 5083 aluminium plate and take great care with our welding and fittings. The Rigideck floor is fully sealed, so that nothing can find its way under it and we take pride in the way that we aim to build a better engineered boat.”

Indeed, depending on options, these rigs weigh in at around $35,000 to $40,000. There’s a mountain of information – including local dealers – on www.barcrusher.com.au.

by Steve Morgan • If there’s one thing Andrew Stephen and his team from Melbourne Marine Centre are good at, it’s attention to detail. Every time we test a boat from MMC, it’s impeccably presented […]

by Steve Morgan • My first visit to Bunbury’s Sportsmarine was impressive for a number of reasons. Firstly, the dealership is as neat and well stocked as any I’ve seen around Australia. They sell plenty […]

Your complete guide to crab lures

by Steve Morgan • Roll back the clock five years and you wouldn’t find many anglers with a crab-style lure in the tackle box. Sure, some companies tried to get a crab imitation right, but […]