‘Barramundi? They’re a northern species – you won’t catch one this far south will you?’ Working in a tackle shop I am often faced with this exact response whenever I mention that barra can be successfully targeted here in South East Queensland and very consistently.

Barramundi aren’t just a northern species. River systems such as Fitzroy in Central Queensland’s Rockhampton region and the Mary River on the Fraser Coast are home to some of the biggest breeding populations of barra on the east coast. Both river systems are renowned for producing outstanding barramundi fishing, and that trophy size fish could be just one cast away.

Previously, Hervey Bay was about the southernmost limit for targeting barramundi, however – possibly due to major flood events that occurred over recent years – we are starting to see more regular captures as far south as the Sunshine Coast and even Brisbane waters. It is uncharacteristic to find them so far south, yet with varying sizes being caught in multiple systems, is it possible that they could be breeding successfully there too? Time will tell.

I had always thought of barra as being a solitary fish that would find a snag to call home and never leave. Over the years as I have put in more hours in search of this species, I have started to realise just how mobile they really are and not just over short distances – I’m talking kilometres over a few days. I started to understand just how great an impact certain moon phases and tidal variations could have on the behaviour and movement patterns of this species.

This has lead to one rule of thumb I fish by with relative success: on the build-up to a full moon when the tides are big I target areas around the main river mouth of the system and the adjacent flats. During these bigger tides your window of opportunity is only short, due to the sheer volume of water that is being pushed around, making it near impossible to fish when it’s running.

These larger tides trigger the barra to travel and aggregate in large numbers in certain locations such as rocky headlands or deeper holes towards the main river mouth where they can sit in a back eddy out of the main flow and gorge themselves on the masses of bait that are being flushed out. Whereas around the period of the quarter moon and as tides begin to subside, a percentage of these fish begin to disperse and travel back upriver. With these smaller tides, it allows for prolonged bite periods and more manageable fishing when targeting structure like rock bars and sunken laydown timber.

When faced with exploring a new location it can often be quite daunting to know where to start, as some of these systems are huge! I have found this myself in the past, where I have spent the majority of my day searching for the best looking structure or water quality and have missed the key bite periods, because I have been driving when really I should have been fishing.

Try not to over-complicate things. Firstly, locate a likely-looking structure; my preferred structures are rock bars and outcrops or laydown sunken trees with bait present in the area, as big barra have to feed. The next factor (one of the most important) is timing, being at that location at the correct stage of the tide when they are going to bite. Timing is so crucial and learning when to be at a location according to the stages of the tide takes many hours spent on the water.

Another key feature that I look for when targeting barra is a back eddy, as they just scream ‘barra’ and fishing these back eddies has proven very successful in my local area. A back eddy is formed when the tidal flow meets a structure and is deflected off in a certain direction, creating a patch of still or dead water not affected by the current flow. Barra love to use this to their advantage, so they can exert minimal energy. This is where timing is so important, as at different stages of the tide there may or may not be a back eddy, so learning to time your session for when the tide is at the right stage to form an eddy at your chosen structure is very important.

I have purposely positioned myself at locations before the run starts to identify at what stage of the tide a back eddy started to form in that location. In doing so, I was able to monitor just how consistently barra moved into that location once it had formed and the same trend followed for a large percentage of the locations I fish.

Knowing your tides is also very important. On the Fraser Coast the last of the run-out tide has generally produced the greatest results when targeting barra and I presume the same trend would be applicable in most areas. As the water recedes from behind the mangroves, mud flats, drains and timber-lined banks, it forces the nervous baitfish out into vulnerable waters. It also concentrates the barra into smaller key locations for this stage of the tide, in-turn making them easier to locate and target.

This low water period also makes finding structure a lot easier, as often it isn’t visible. Modern advancements in electronics have definitely come a long way with features such as StructureScan and DownScan being invaluable tools when searching for barra, especially in new territory. You can basically scan a rock bar or laydown timber and determine whether or not there are any fish sitting on this structure. 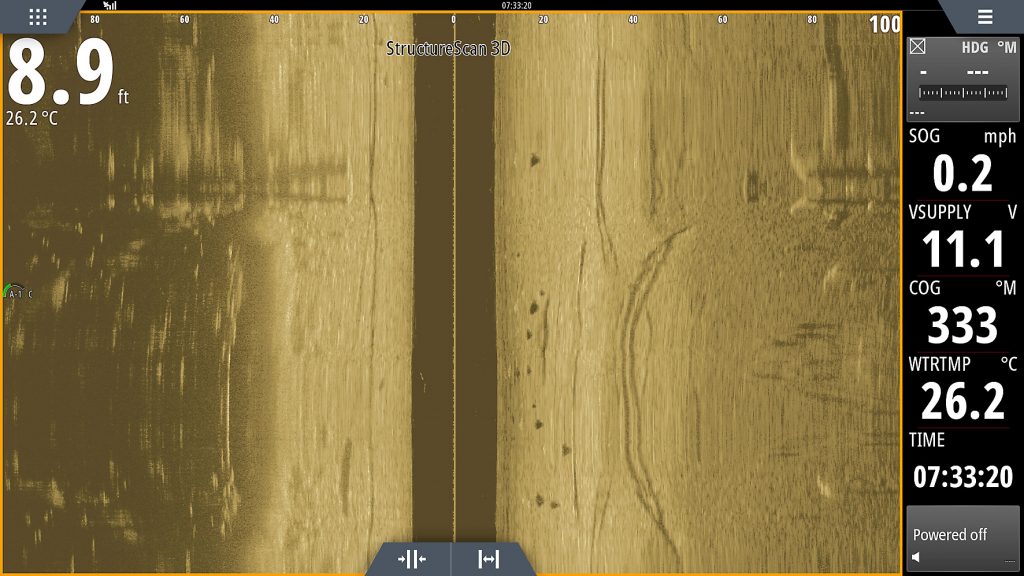 This screenshot taken from the Simrad NSS12 shows barra beginning to school up in a back eddy off a big snag pile. 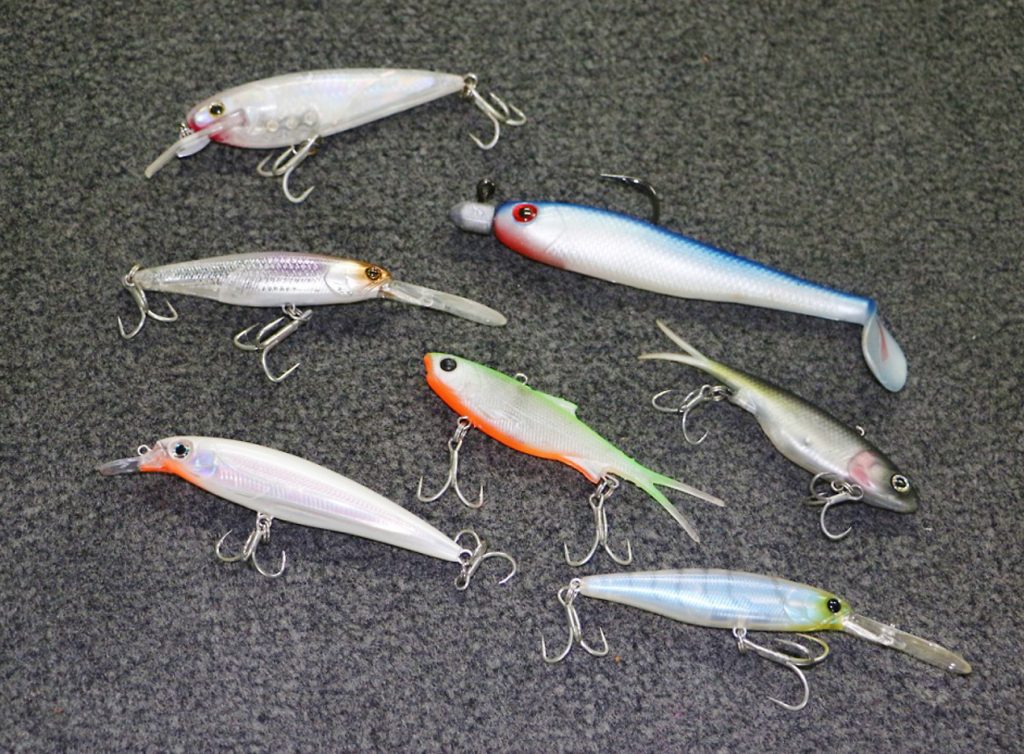 A selection of the author’s favourite barra lures; note the majority have a base colour of white or pearl. 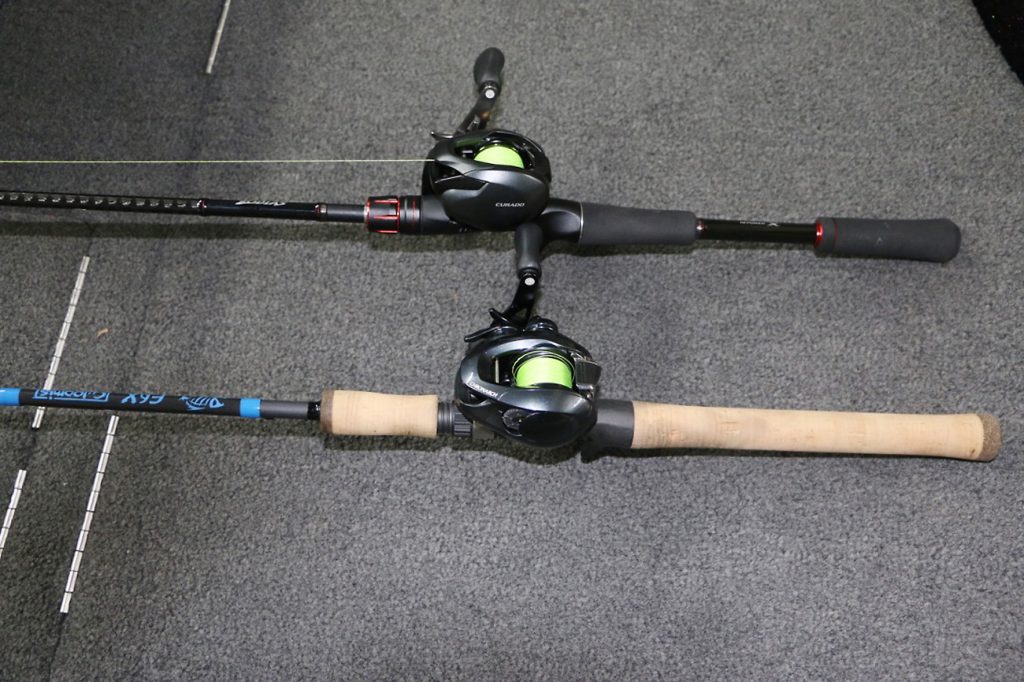 Two of the author's favourite combos – a Shimano Chronarch 150G matched to a G. Loomis E6X 684BCMH is his preferred setup for twitching and stalling hardbodies and a Shimano Curado 200K matched to a Shimano Zodias 661 BCMH is ideal for working soft vibes and soft plastics. 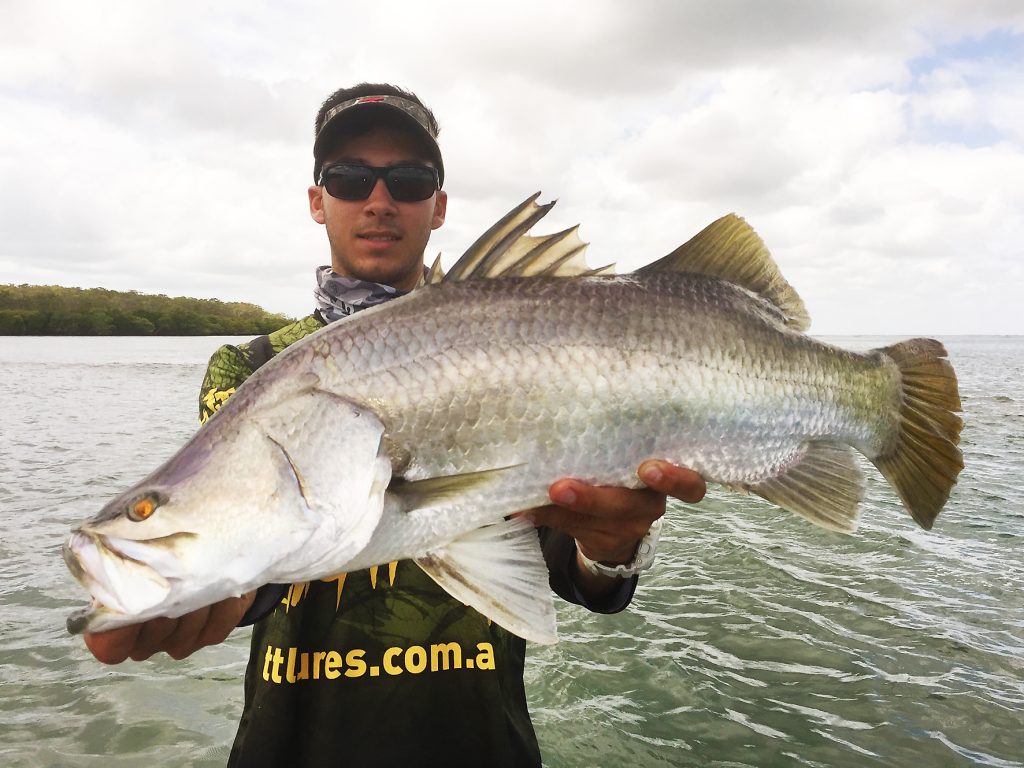 The Hervey Bay region has a larger fish population than most. 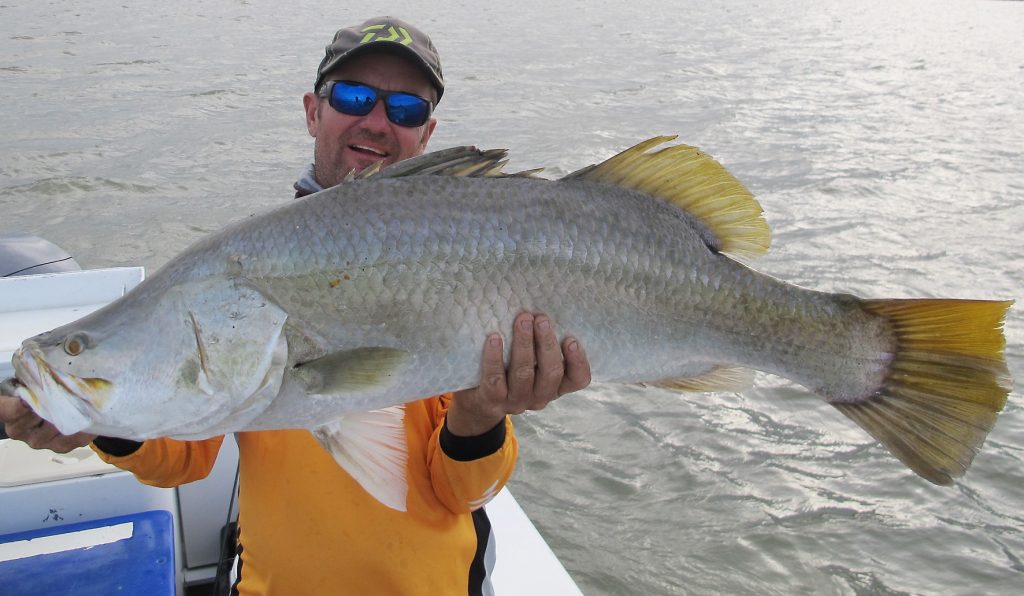 Mark ‘Bargy’ Bargenquast with a better-than-average fish that he caught off a rock bar with a vibe. 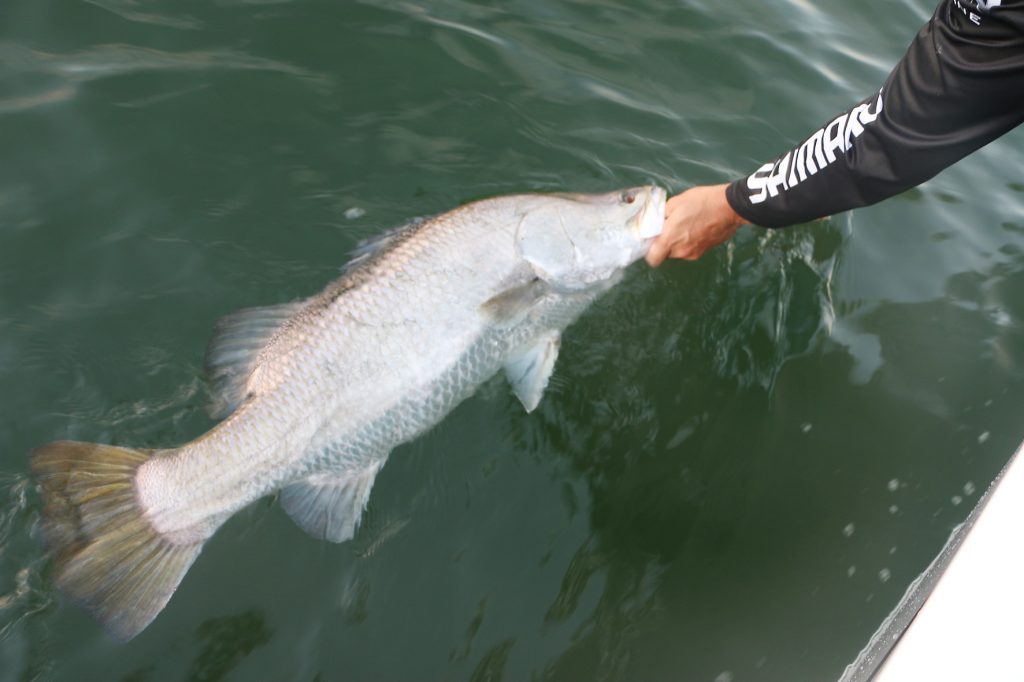 It always pays to revive the fish before release so hopefully it can do its thing and contribute to future barra stocks. 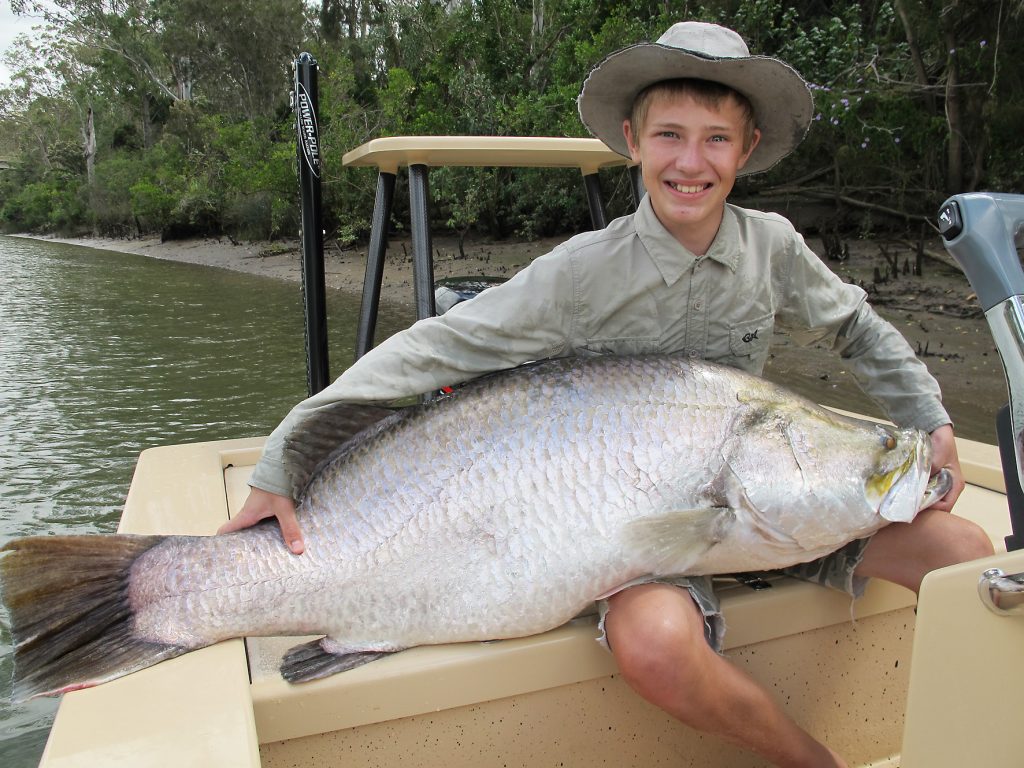 Jackson ‘Jacko’ Bargenquast with an absolute fish of a lifetime, measuring 132cm. This fish was taken from the Mary River on the Fraser Coast.

Structure Scan allows me to monitor the fish’s movements and basically work out at what stage of the tide the fish would move into a certain location and when they would leave. Learning to read and trust your electronics will enhance your overall results. Once you gain a greater understanding of where, when and why, you come to the easier part of how. There are many different lures and techniques available nowadays that if used in the correct scenario will undoubtedly work and draw a bite.

Soft vibes are one of the most versatile lures, and can be fished both deep and shallow. They can be hopped, double hopped or slow rolled and are a great option for fishing in areas with current, as they get down to the required depth and are easily kept in the strike zone. A larger profile paddle-tail soft plastic can be used for a very subtle and natural presentation when slow rolled; this is a killer lure and technique when faced with stronger currents or when searching, as it allows you to cover ground quickly.

My personal favourite lure and technique, which I find most exciting, is aggressively twitching and stalling silent suspended hardbodies. That strike on the pause or as you go to twitch the lure is hard to beat. I often upgrade the terminal hardware on my lures to heavier duty rings and trebles to withstand the punishment inflicted by large barra, giving me piece of mind. However, when doing so, ensure the lure’s action or suspend rate is not affected by going too heavy-duty.

It pays to have an assortment of different trebles in the box to work out which ones best suit the lure for optimal performance. Having access to a pool makes this job far easier as you can swap and change until you get the combination just right.

My preferred outfit of choice is a low profile baitcaster combo and there are numerous good quality choices on the market. I have found the G Loomis E6X 684 BCMH matched to a Chronarch 150G spooled with 30lb braid very comfortable to use – it’s very light, which makes it easy to cast for long periods. This outfit has accounted for some quality fish.

On one occasion I had a light northerly blowing from behind as I positioned myself down current from a rocky outcrop on the last of the run-out tide. This particular day I had timed it right as there was still enough tidal influence to create the perfect back eddy and I observed what appeared to be a very nervous school of herring packed up tight to the rocks. I chose to fish my most confident technique in this scenario, twitching and stalling a suspending hardbody, aiming to keep the lure in the strike zone for as long as possible.

Cast after cast I worked this back eddy for no result, so I made a slight adjustment to where I was positioned and the direction I was working the lure. That very next cast I presented the lure in tight to the rocky outcrop and began to work it back with the exact same retrieve as previously. A few twitches in, I felt a solid hit. For a split second the line went slack before a solid barra came tail walking out of the water trying to dislodge my hardbody.

My final message here is that there is no right or wrong in fishing, as every day on the water there are varying conditions to contend with. It is how you perceive them and adjust in that scenario that may just make all the difference between drawing that bite you’ve been working hard for or going home with a donut.

Out of Season Barra Etiquette

by Dan Kaggelis • Another barramundi open season has come and gone and for many anglers it has been a tough one. The severe lack of monsoonal activity and consequent flooding rains across the state […]

by Jamison Godfrey • Unfortunately I don’t get to use this fish much being in this part of the country. Being a farmed fish should hopefully see Tasmania able to get this fish more regularly […]