You will have read earlier in the year about the big Mercury launch Fishing Monthly attended in Miami, Florida. At that time, the American outboard giant released a naturally aspirated 4-stroke outboard platform with large capacity (3.4L), abundant mid-range torque and fantastic efficiency in a package whose looks divided customers. Some loved it and some were a little standoffish when asked what they thought about the futuristic design. 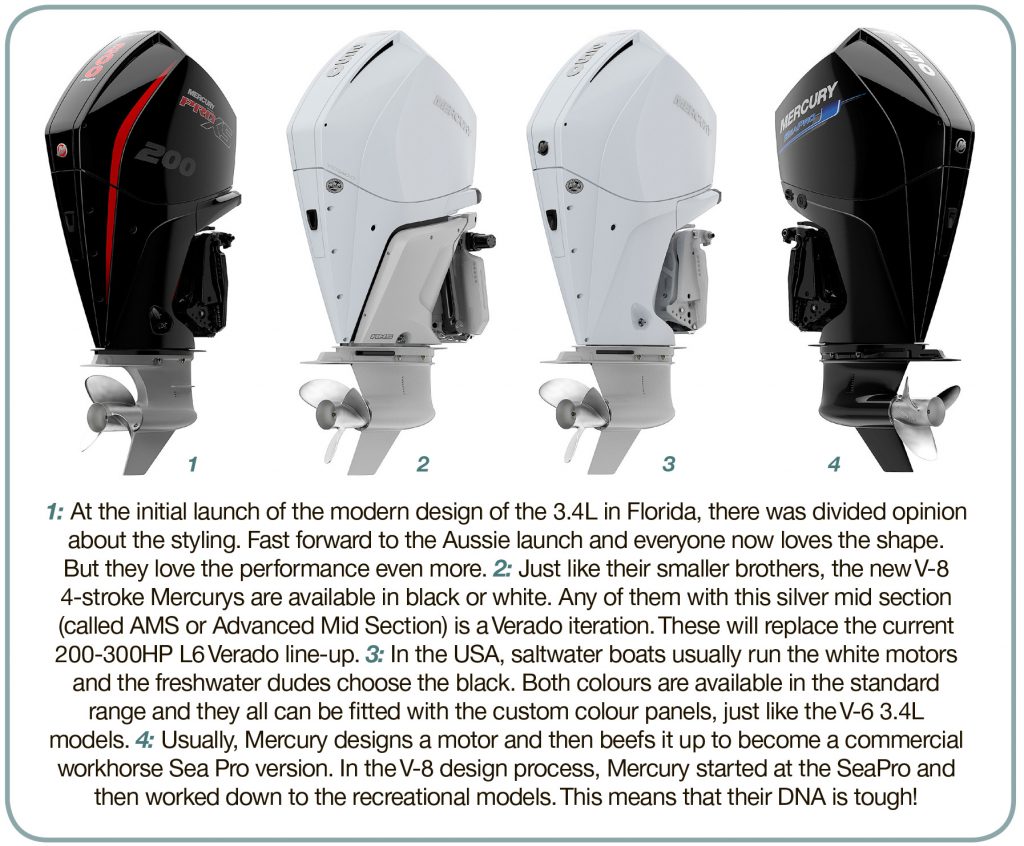 Fast forward a couple of months and it’s like déjà vu, only this time on the Gold Coast in Queensland and in conjunction with the Australian, New Zealand and South Pacific region Mercury Dealer Conference.

Mercury were very serious about keeping this product under wraps until the 18 May embargo date. At the launch event for the dealers, mobile phones and cameras were banned!

Media were allowed a little more flexibility, but I wouldn’t want to be the guy who broke the official embargo date. So here’s some news that we’ve been sitting on for nearly a month!

Mercury have built upon – literally – their 3.4L platform and have now released an 8-cylinder version of the 6-cylinder technology. Displacing 4.6L and massively lighter than the L6 Verado lineup, there was no reason to keep any of the original Verado 200-300HP engines in the range – as well as the entire direct injection OptiMax 2-stroke outboards. All of these will now cease to be available after stocks run out.

The same way the 3.4L killed the L4 Verados, this 4.6L platform has killed the bigger OptiMax and smaller L6 Verado outboards.

Let’s take a few steps back, though, and recap the benefits of this platform, as it shares so much with its 3.4L siblings.

There’s a saying in boating – and in fact for most engines – “there’s no replacement for displacement”. By now, you’d have deduced that these V-8s have a 4.6L capacity. How does that compare with the models they are making obsolete? Well, the 200-250HP OptiMax were a 3.0L engine and the supercharged Verados only 2.6L.

Where you feel the difference is how the motor performs when you punch the throttle down – Mercury have packed in more torque throughout the rev range, particularly in the mid-range, which is the part of the curve where you’re pushing your rig up and onto the plane.

On the dealer test day, everyone was talking about how, irrespective of the load carried, these motors threw the craft up and onto the plane.

Turning the capacity into horsepower is the four valve-per-cylinder, dual overhead cam design. And as with all modern Mercury platforms, they are designed to require no valve train servicing for the life of the engine. That’s one of the main reasons that these four strokes will be cheaper to service than ever before. 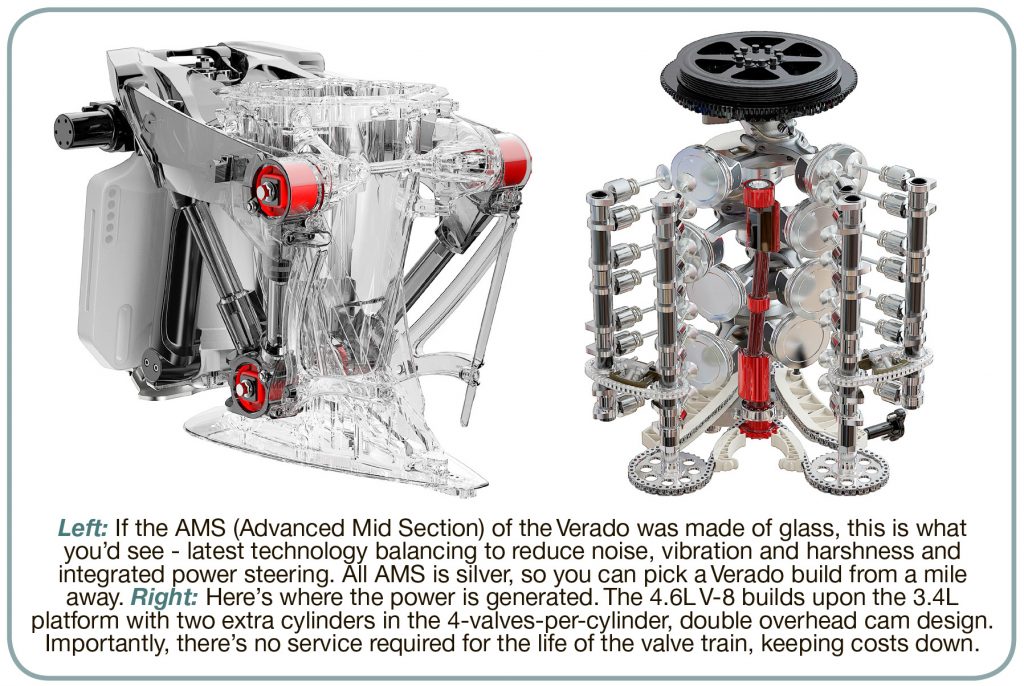 On paper, there seems to be many iterations of the platform to suit all of the market segments that these motors will service.

VP of Sales, Randy Caruana, explained one of the differences in design.

“Previously, we’d created a platform and then derived a commercial grade SeaPro model for the commercial market. In this case, we designed the commercial motor first and then created the recreational derivatives,” he said.

The cool thing is that no matter whether you are re-powering from a OptiMax or Verado with cable, hydraulic or electro-hydraulic steering, all current versions of Mercury compatible steering will work with these motors. Keeping your current steering and SmartCraft gauges will help keep your repower costs down. A lot.

One of the first questions on everyone’s lips after the unveiling was about weight. To really be competitive in the smaller boat marketplace, it needed to be significantly lighter than the L6 Verados they were replacing.

The answer was greeted by silence and nodding of heads. The 4.6L weighs in exactly the same as the lightest of the motors it replaces. A 250 ProXS 4.6L weighs the same as an OptiMax 250 Pro XS at 229kg.

“We’ve had some of the professional bass anglers running these motors on Lake X in Florida recently and they all had just one question – ‘when can I get one?’” said the Mercury Professor, Robin Senger while detailing the performance advantages of the ProXS platform in his Fishing Monthly video interview (scan the QR code hereby on your smartphone to watch it).

That’s a performance increase equivalent to chucking a small adult (or large child) off the back of the boat – permanently.

Well, add another 1.2L of displacement for an extra 14kg of weight and it only strengthened my opinion.

Interviewing dealers who were taken on a ride by Kris ‘Captain Risky’ Hickson in a 225HP Pro XS version on his 19ft bass boat, unanimously stepped out of the boat with the same windswept smile.

“That guy knows how to drive a boat,” was usually followed by, “that torque just pushed me back into the seat.”

And these were experienced boat dealers.

Kris himself admitted he was still getting used to the lack of weight on the transom but marvelled at the economy improvements over his current Verado Pro 225. 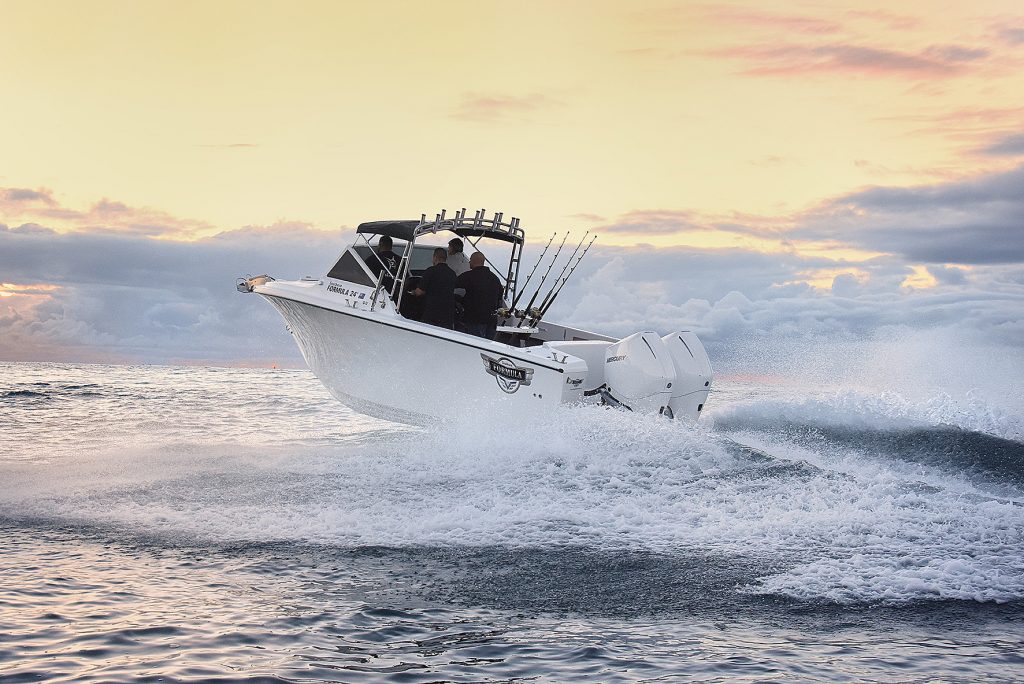 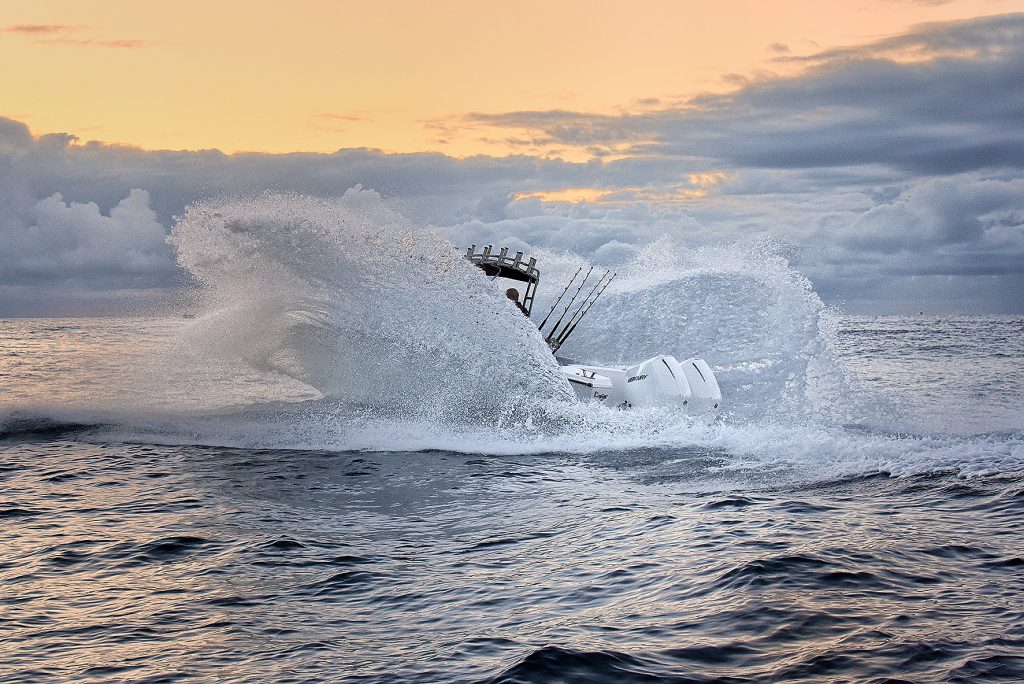 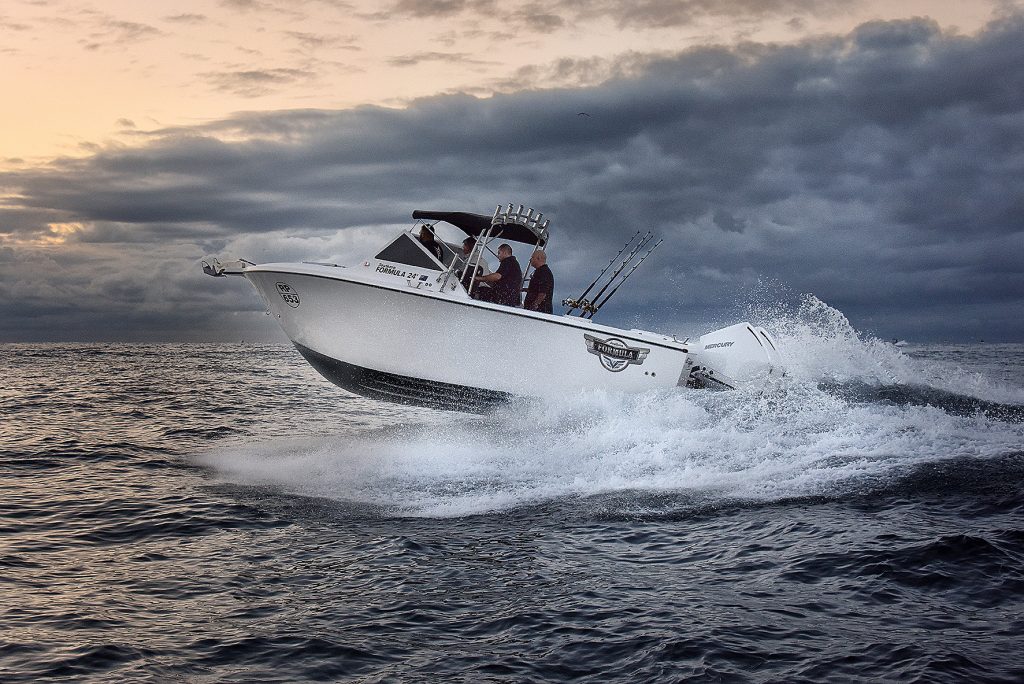 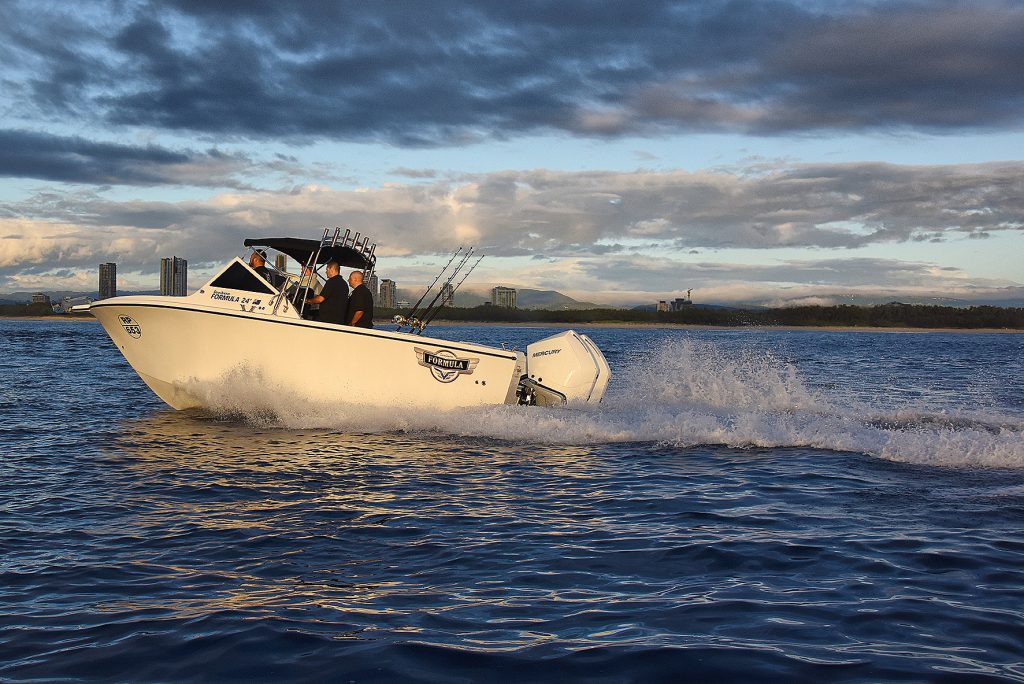 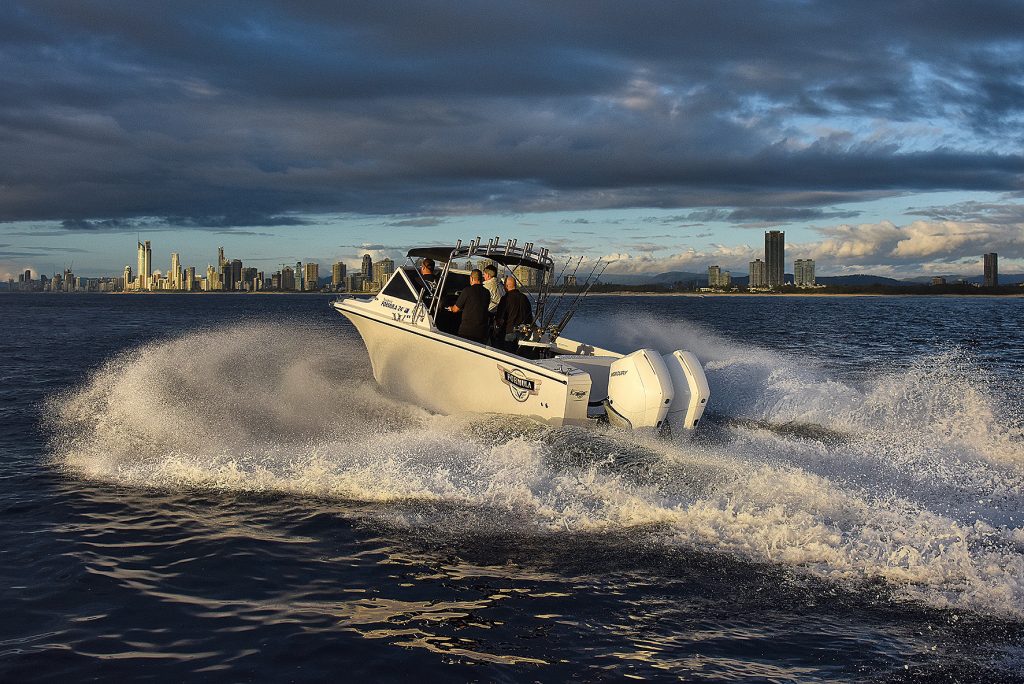 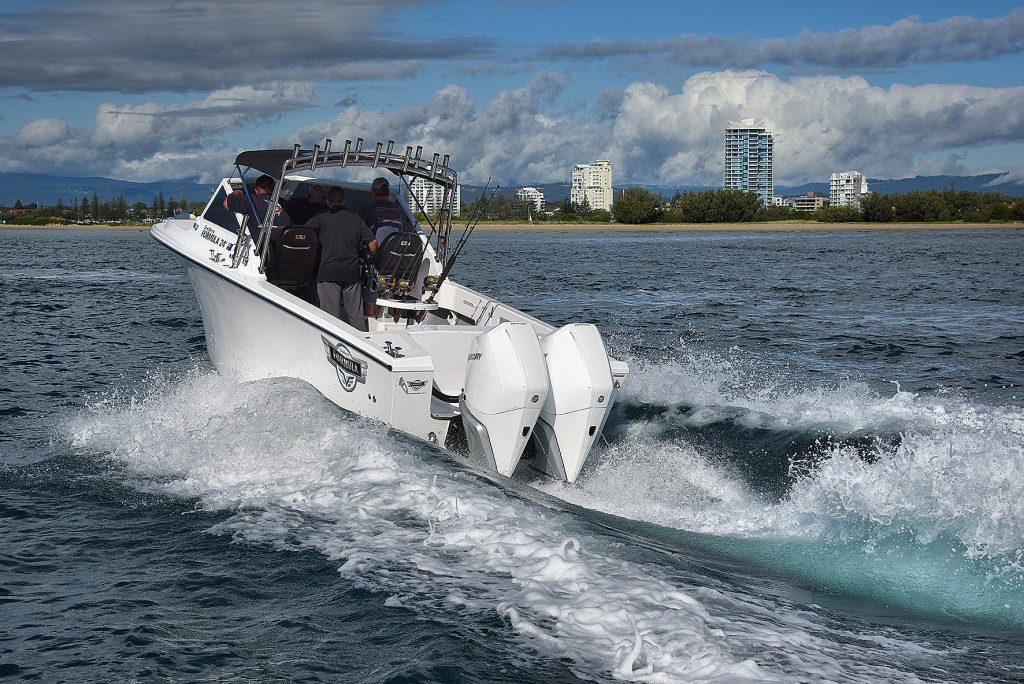 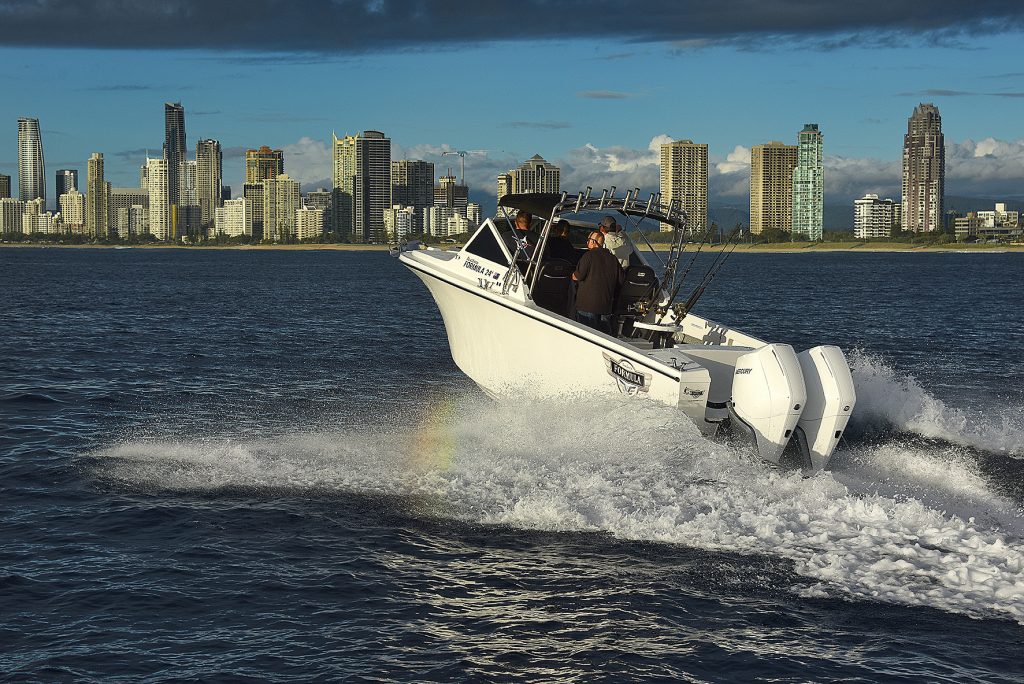 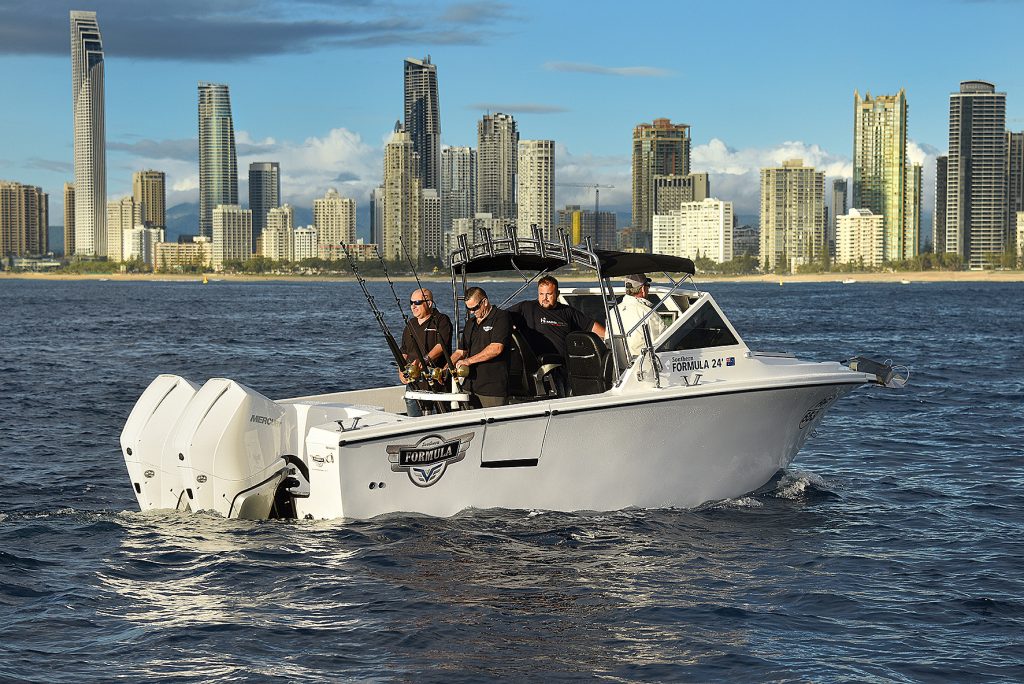 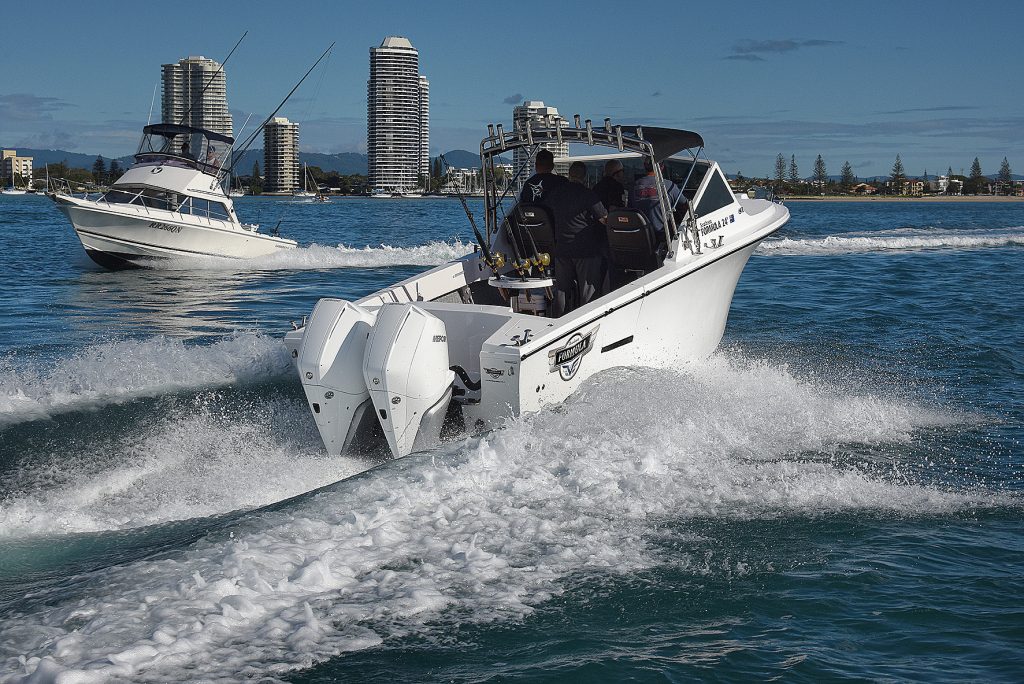 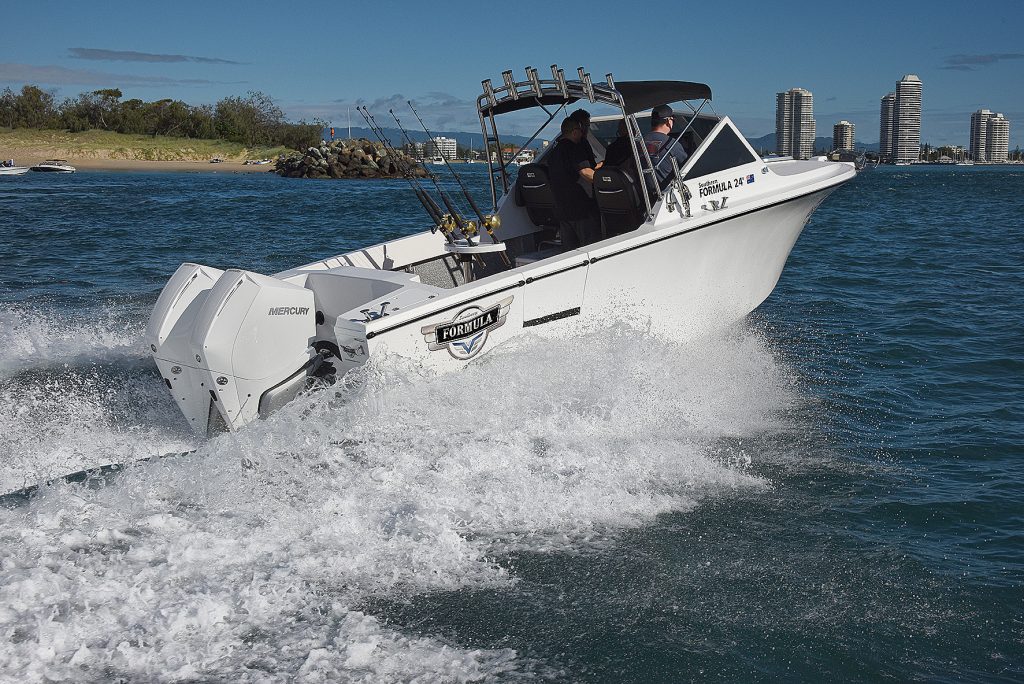 “I’d use around 113 litres per hour at wide open throttle, but I’d struggle to use over 80 with this motor,” Kris remarked.

He went on to mention that the lack of weight in the rear end meant that he could now fish shallower water and access areas that he’d been unable to with the L6 Verado.

Al McGlashan had similar feedback. He’s been running a pre-production V-8 for a little while now and has spent more time running them than anyone else on the test day.

“I’m excited by the extra range that I get. This motor uses 20% less fuel than my L6 Verado and to me, that means that I can go father with less pain at the fuel pump. Watch out New Zealand,” he exclaimed.

You can see both of their interviews by scanning the QR codes on this page.

If you’re researching this new motor platform, there’s a few acronyms that you’ll need to know. Lots of it is the same technology that we reported on in the 3.4L, but let’s recap.

ASC: Adaptive Speed Control. This is a paradigm shift where the throttle governs the RPM of the engine rather than the amount of fuel delivered. It means that if you set it to 3,000 rpm, it’ll automatically add or subtract throttle to keep the motor at 3,000 rpm.

When you turn a corner, you usually have to add throttle yourself to keep revs high. ASC does this for you and improved the driving experience.

AMS: Advanced Mid Section. This is the part of the outboard between the powerhead and the gearbox. AMS is what turned a supercharged 2.6L Verado into a smooth, whisper-quiet outboard.

AMS in all of the 4.6L outboards is silver. Whether the motor is black or white, a silver mid section means that it’s a Verado. And it means that the noise, vibration and harshness of the powerplant is at a minimum.

ARO: Advanced Range Optimisation. Mercury’s Chief Technology Officer, David Foulkes, explained this to me in Florida at the 3.4L launch.

“Basically we have an algorithm that works out which area of the rpm versus engine load we could change for the benefit of fuel economy, and we wanted to apply that in as wide a range as we possible can so that you get the biggest benefit,” David explained.

“The secret is, however, to be able to switch between the standard mode and a leaner air-fuel mixture mode and for the customer to never know that they’ve made the switch. We’ve patented a series of algorithms to make that customer experience exceptional.”

It means that these motors share the exceptional fuel economy of the 3.4L platform.

How’s this for unique? The ability to remove a cowling with a handle and a single unlatch point is innovative. Add to that a point to check and fill the oil under the same lid and you have a point of difference that users will really appreciate.

Owners of the V-8s will share this ability and the inspection hatch is on all models in the platform. 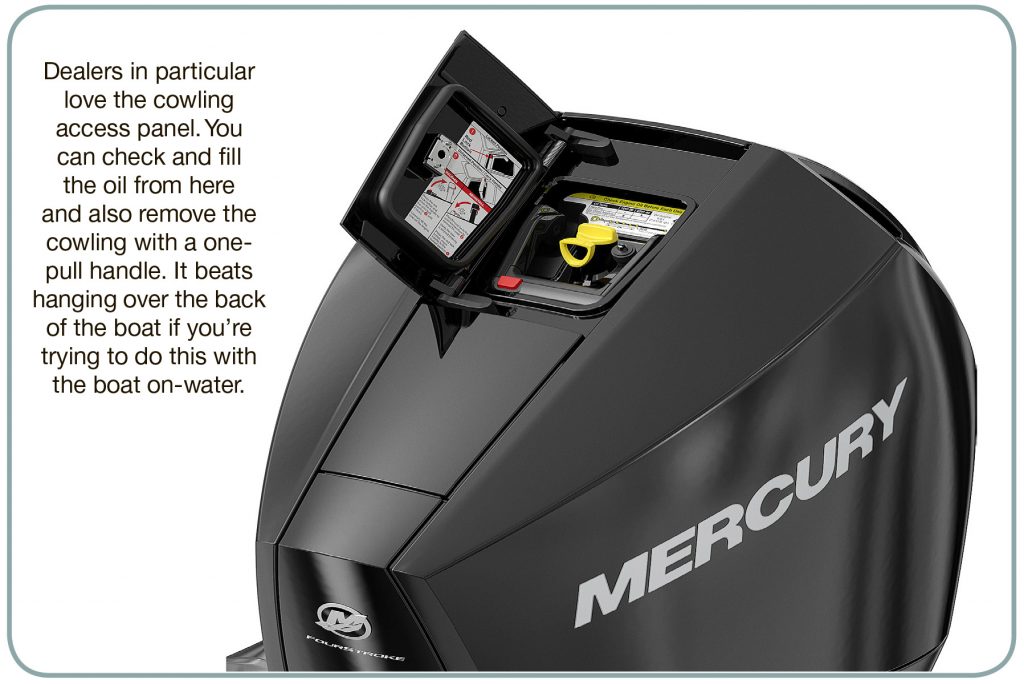 Lastly, I’m sure that you’re wondering if these motors actually sound like a V-8?

Well, they do and they don’t. Apart from the mean, V-8-sounding Pro XS versions, the exhaust is geared for quietness over turning heads at the ramp.

But if you have a Verado version, there’s a sneaky button that you can push on your Vessel View that opens one of the exhaust ports and most definitely created that distinctive V-8 tone.

That will turn heads… and it automatically kicks back into ‘quiet mode’ at a pre-set rpm.

It’s audio-bling at the push of a button. 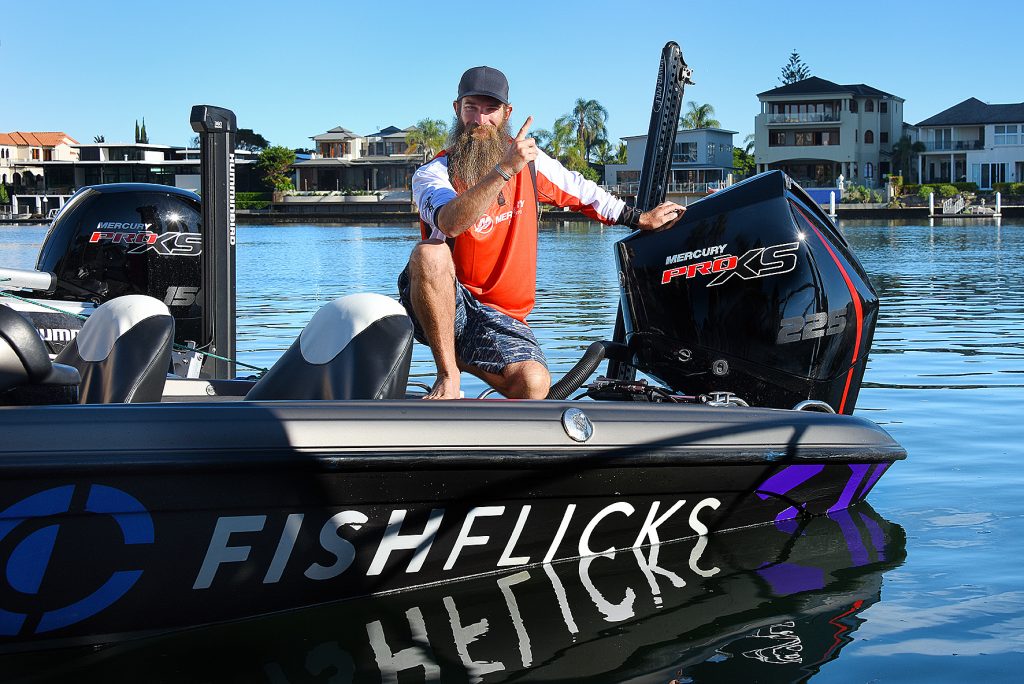 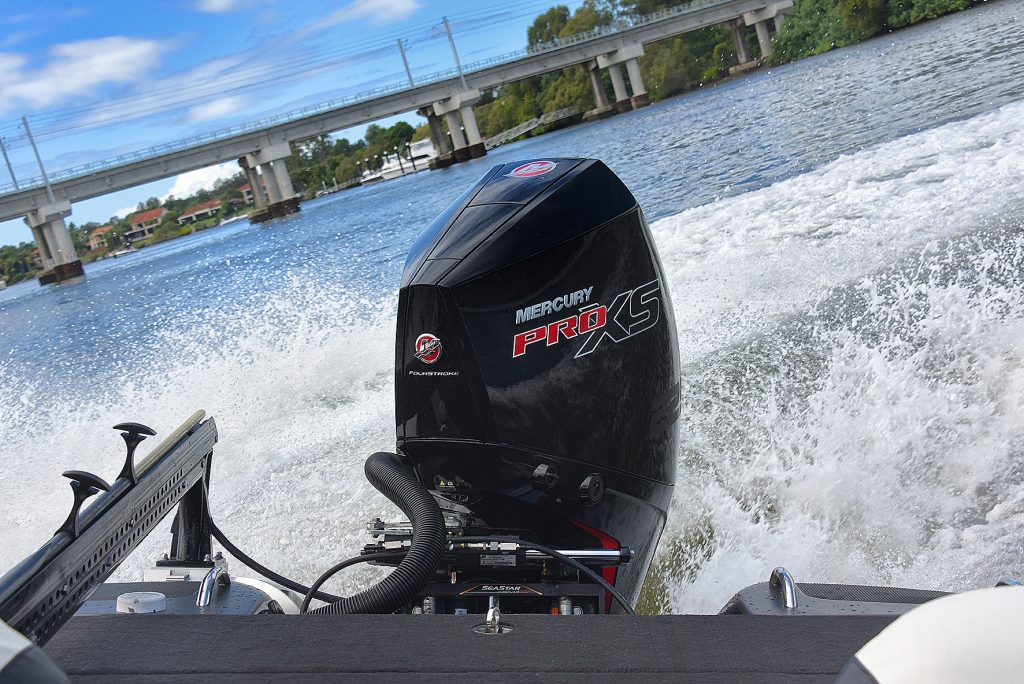 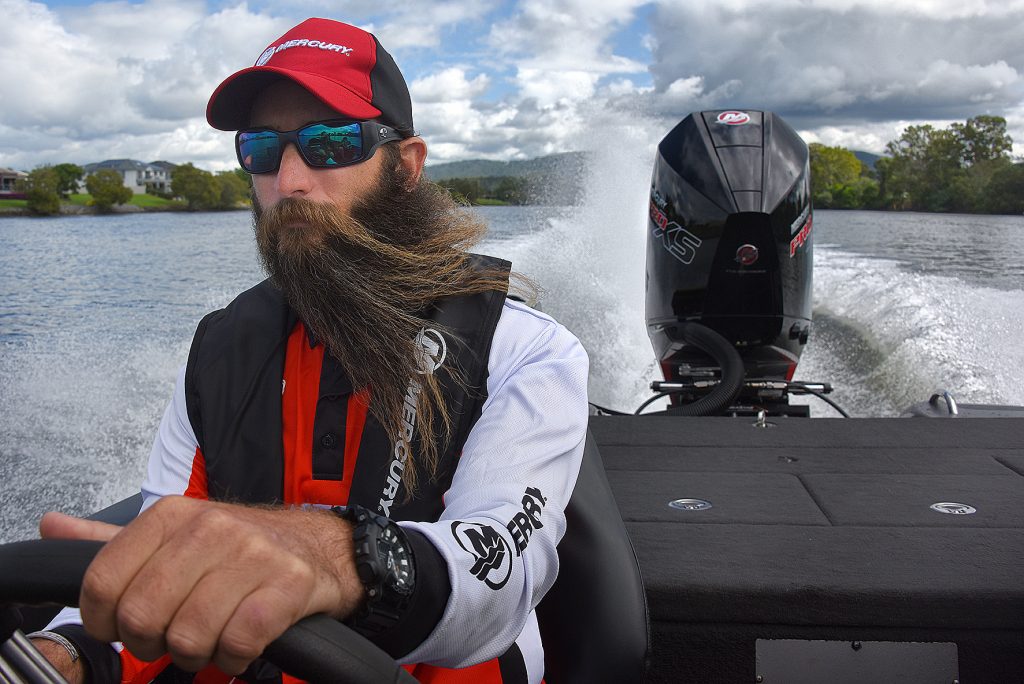 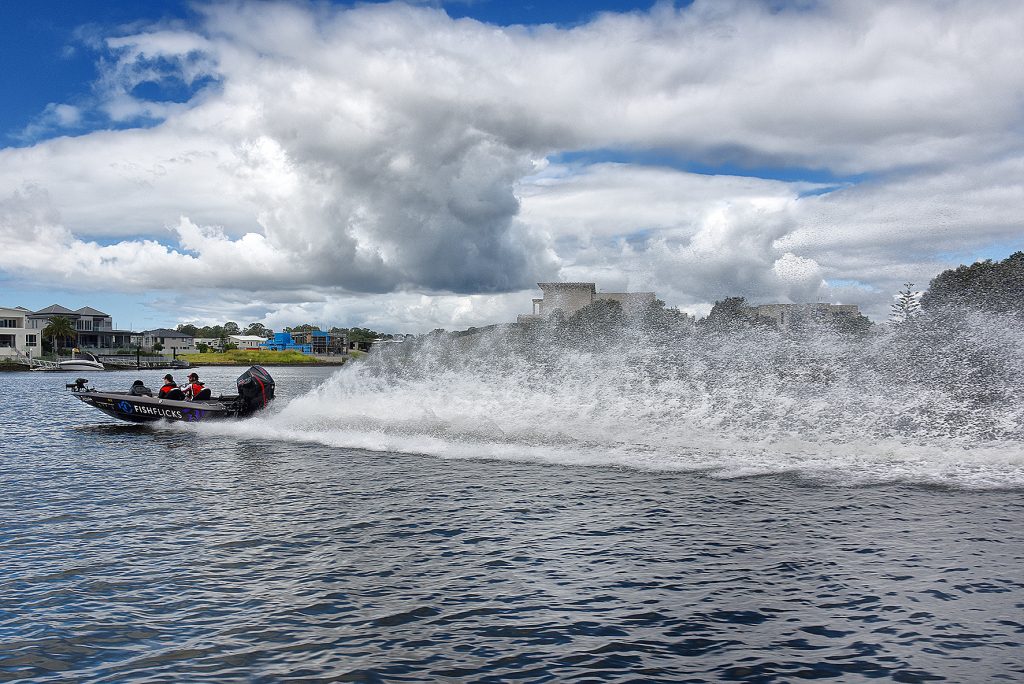 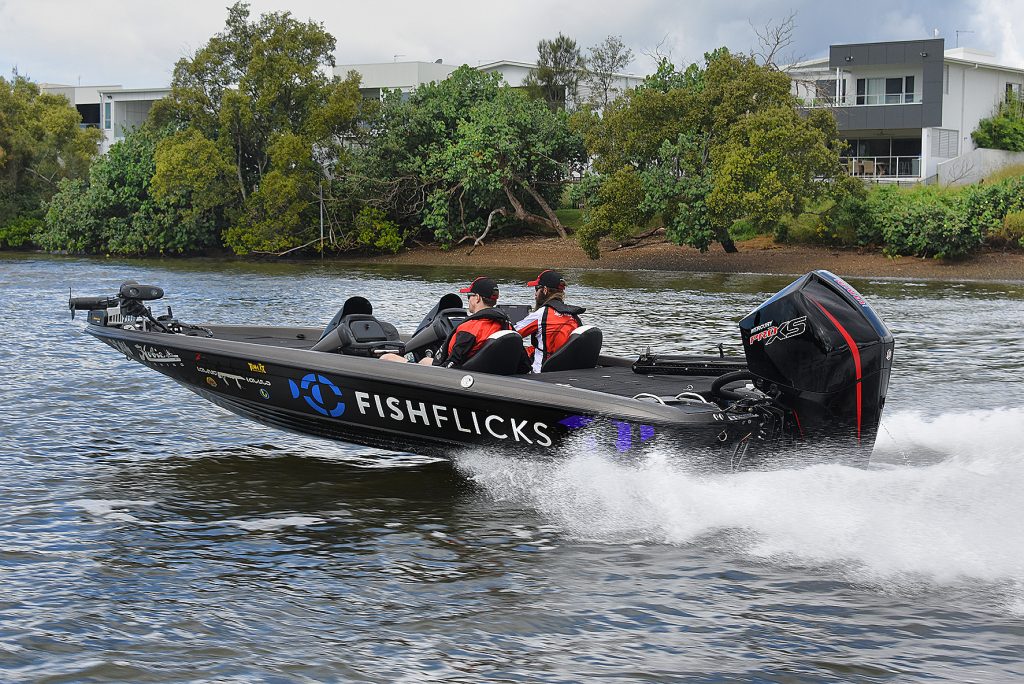 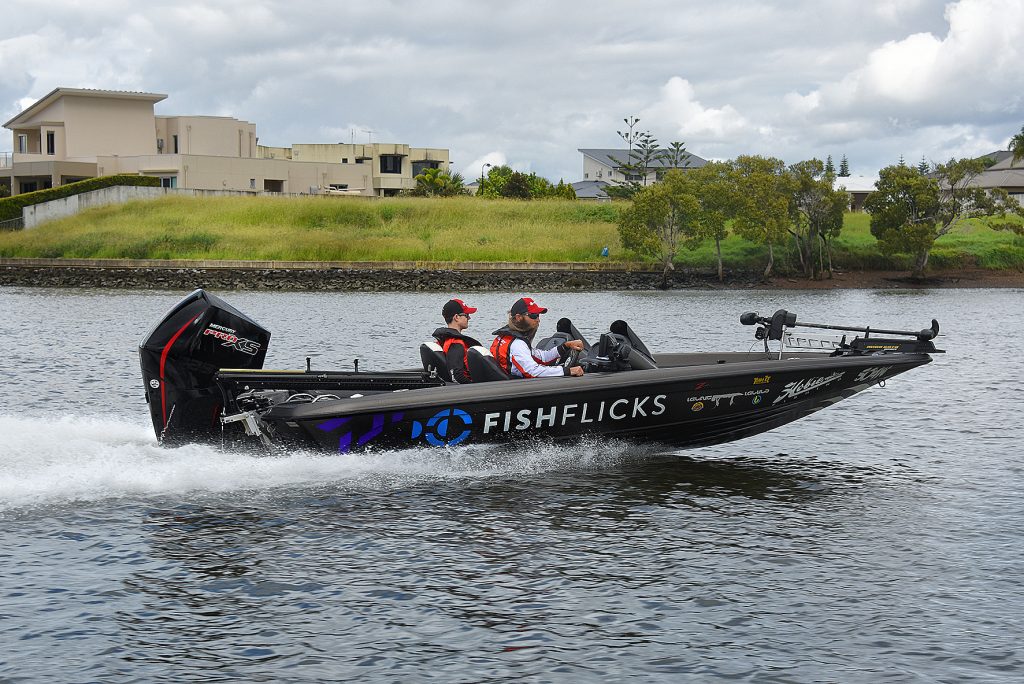 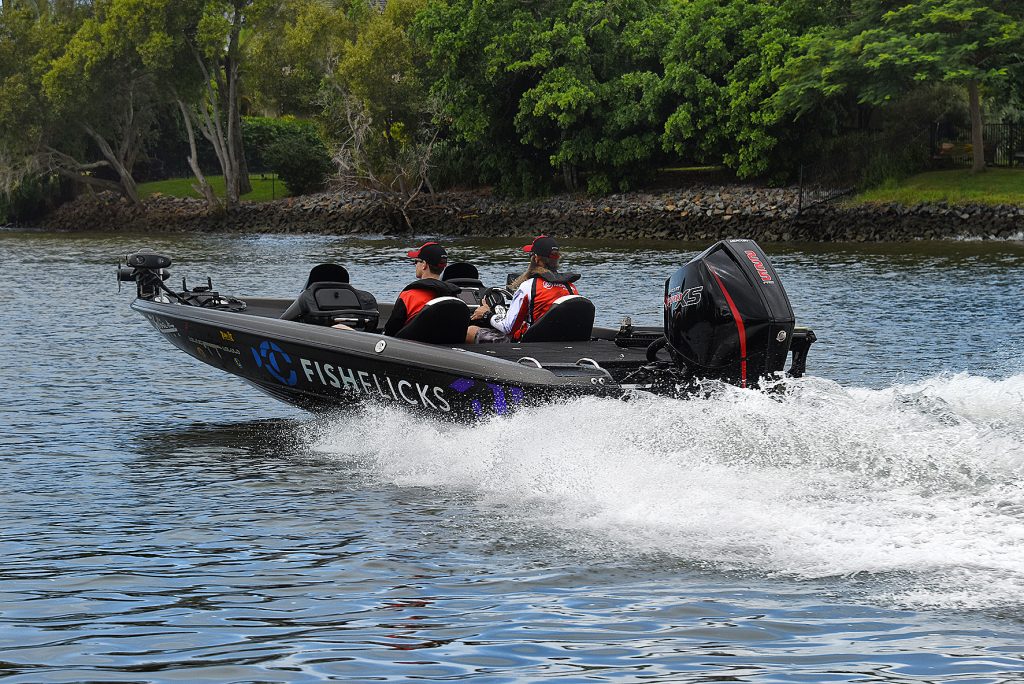 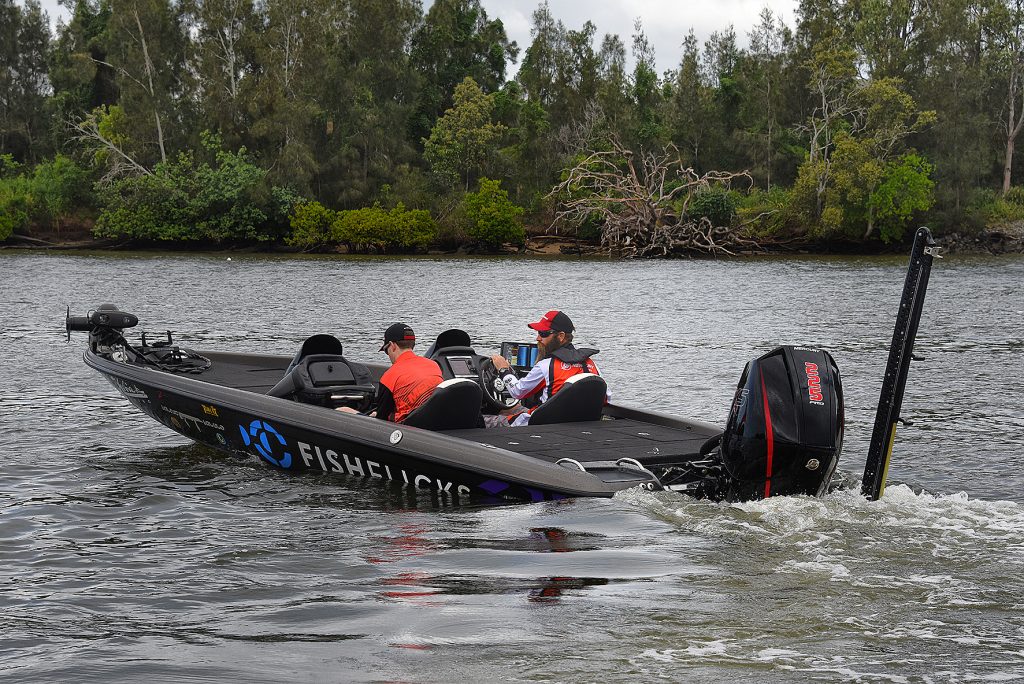 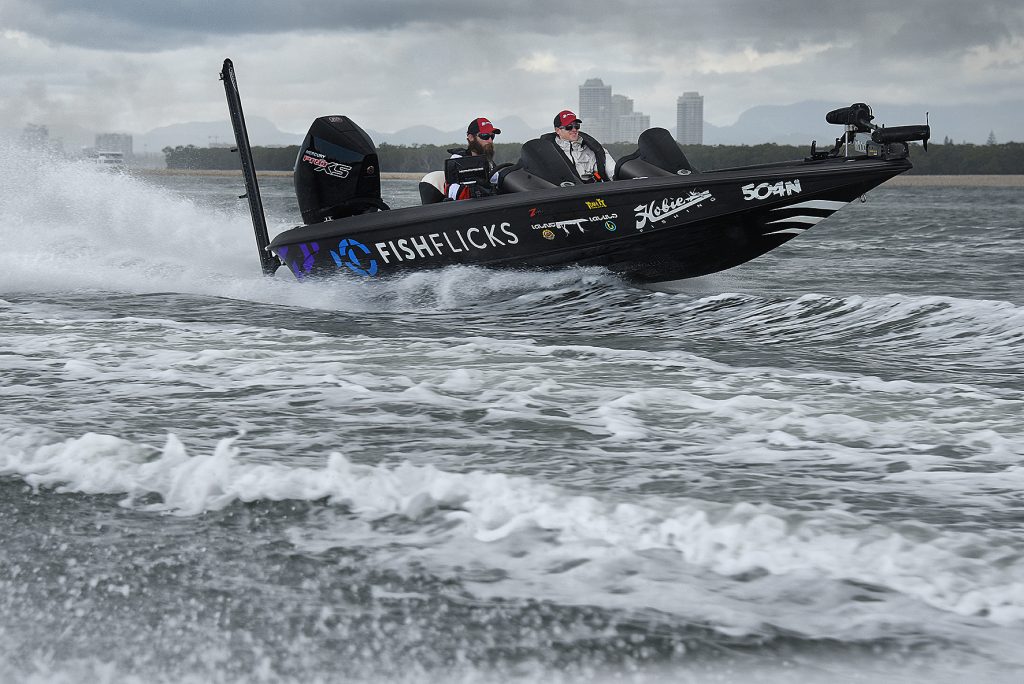 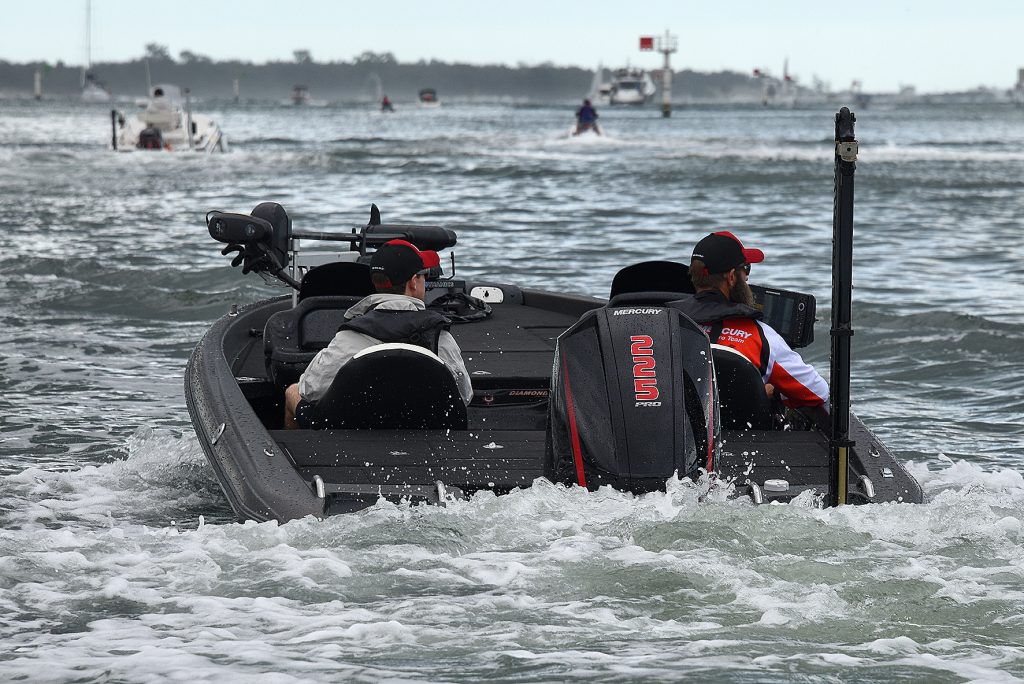 Released after the 3.4L platform, expect these engines to be in-country from July onwards. Demand will obviously be high initially, so Mercury’s Nicholas Webb gave some advice to customers who want the latest technology first.

So how did I enjoy my first V-8 motor launch experience? Fantastic! It’s an exciting time to be involved in the industry with lighter, faster, quieter and more technically advanced motors than ever before.

As a customer, it doesn’t get any better than that.

Tech Tricks: How to rig a skipping gar

by Gordon Macdonald • With waters warming during spring, anglers will be entering the prime period to target one of the numerous billfish species, which grace our Southern Queensland waters. The two main species on […]

by Gordon Macdonald • For all anglers, having good connections is very important for a successful result. For those using lighter tackle, this means knowing the best knots for your chosen main line and leader […]