If there’s one thing Andrew Stephen and his team from Melbourne Marine Centre are good at, it’s attention to detail. Every time we test a boat from MMC, it’s impeccably presented and fine-tuned. They’re the same with their customers, which is why they have a growing band of loyal Melbourne customers.

And when they set up their demo boats, there’s always a laundry list of options fitted that turns a good boat into a head-turning rig. We saw it previously with the Stacer Crossfire affectionately named Hodor (watch the video review on our YouTube channel) and here’s a smaller version made up on the Stacer Outlaw 449 hull.

The boys have turned an entry-level $26K package into an all-singing, all-dancing $50K rig with features that rival much bigger boats.

Fitted with a 60hp Mercury 4-stroke, the rig yields great fuel economy of up to 3km/L, but let’s face it – you’re not buying a rig like this to travel cheaply. You’re buying it because you want your quality time on the water to be a pleasure to experience. 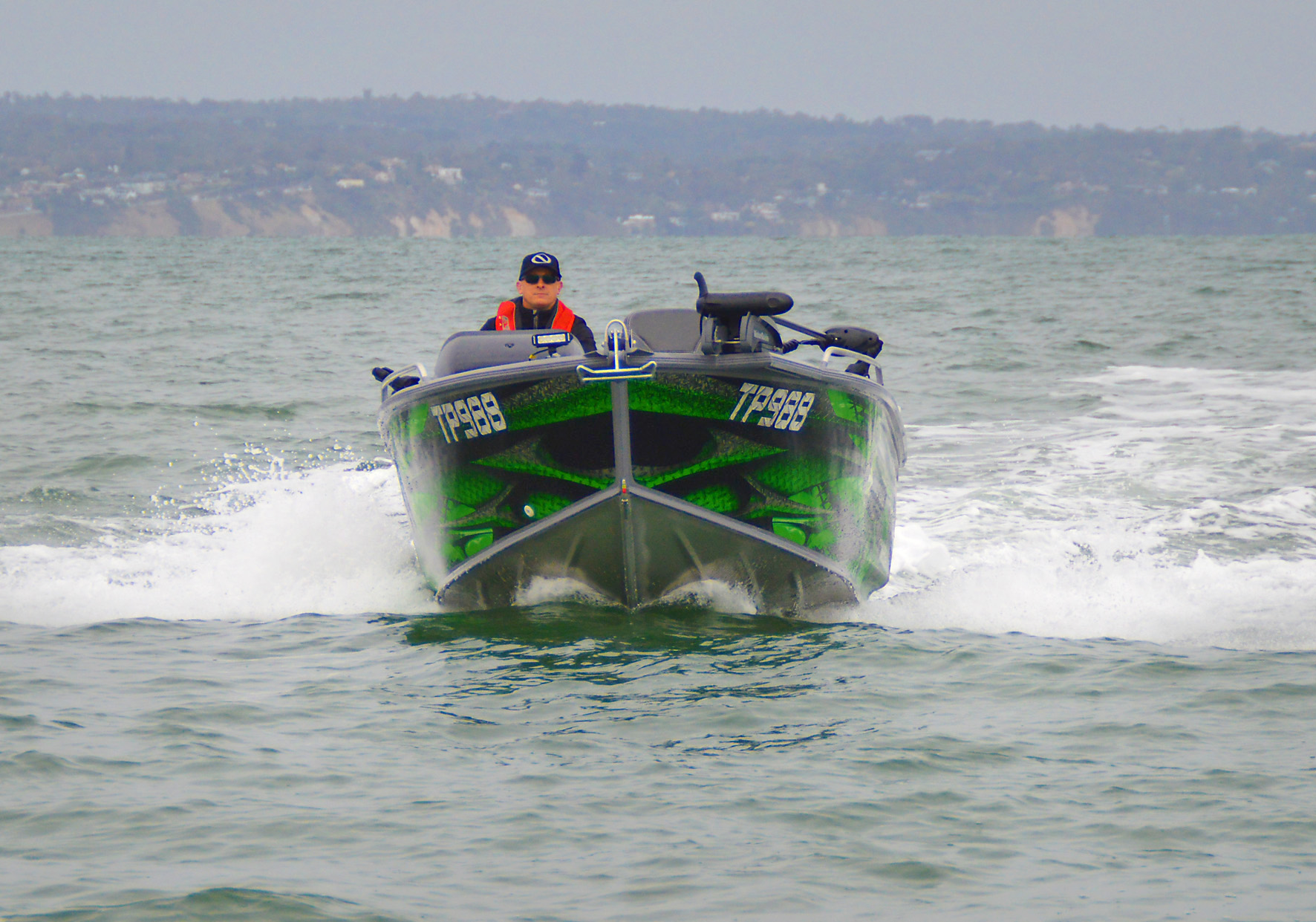 There’s no denying that the wrap adds that wow factor – no matter what angle the boat is viewed from. 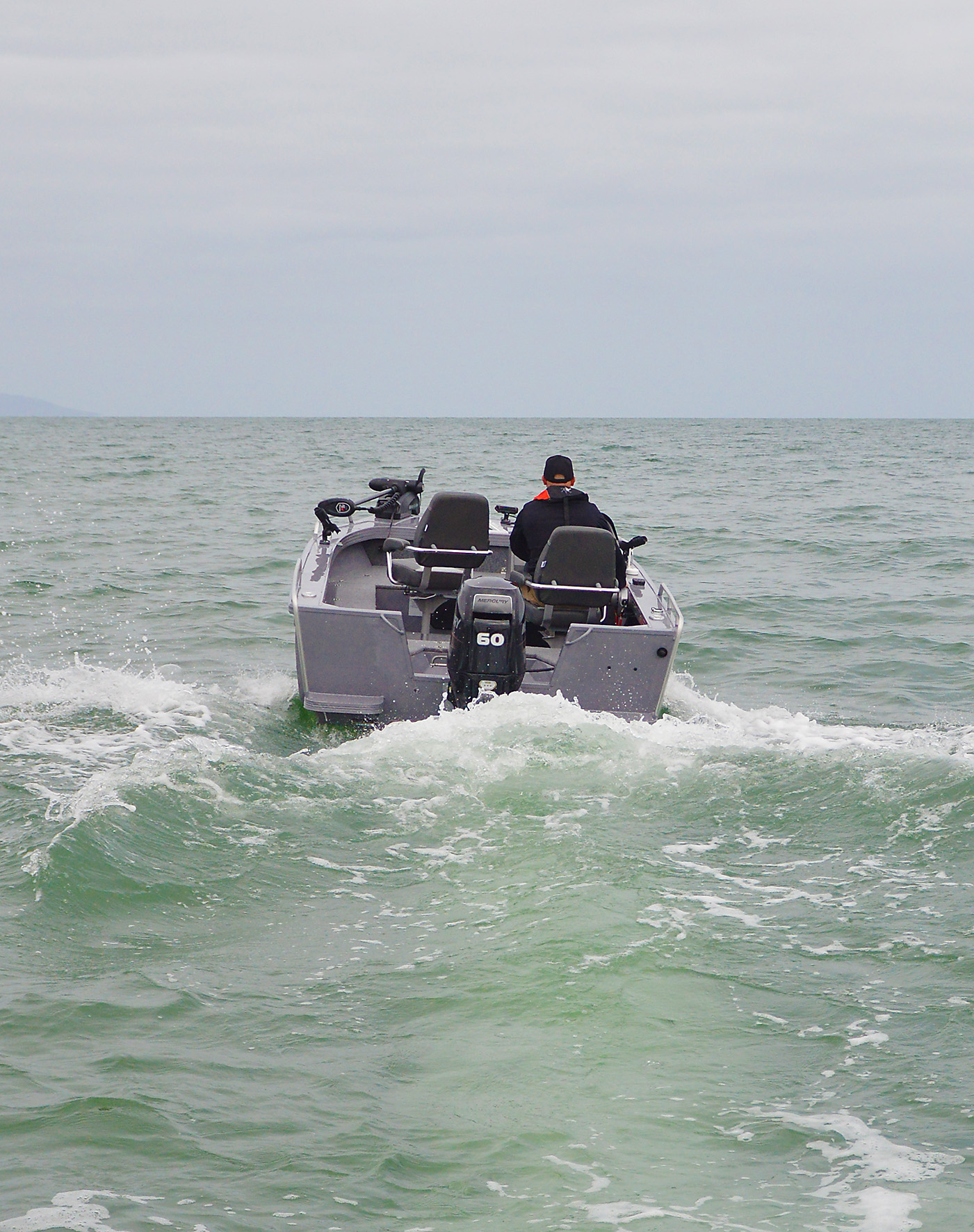 With the 4-stroke, fifth generation 60hp Mercury behind it, the rig delivered best economy of 3km/L at 4500rpm and 35km/h with 50L of underfloor fuel – that gives a theoretical range of around 150km. 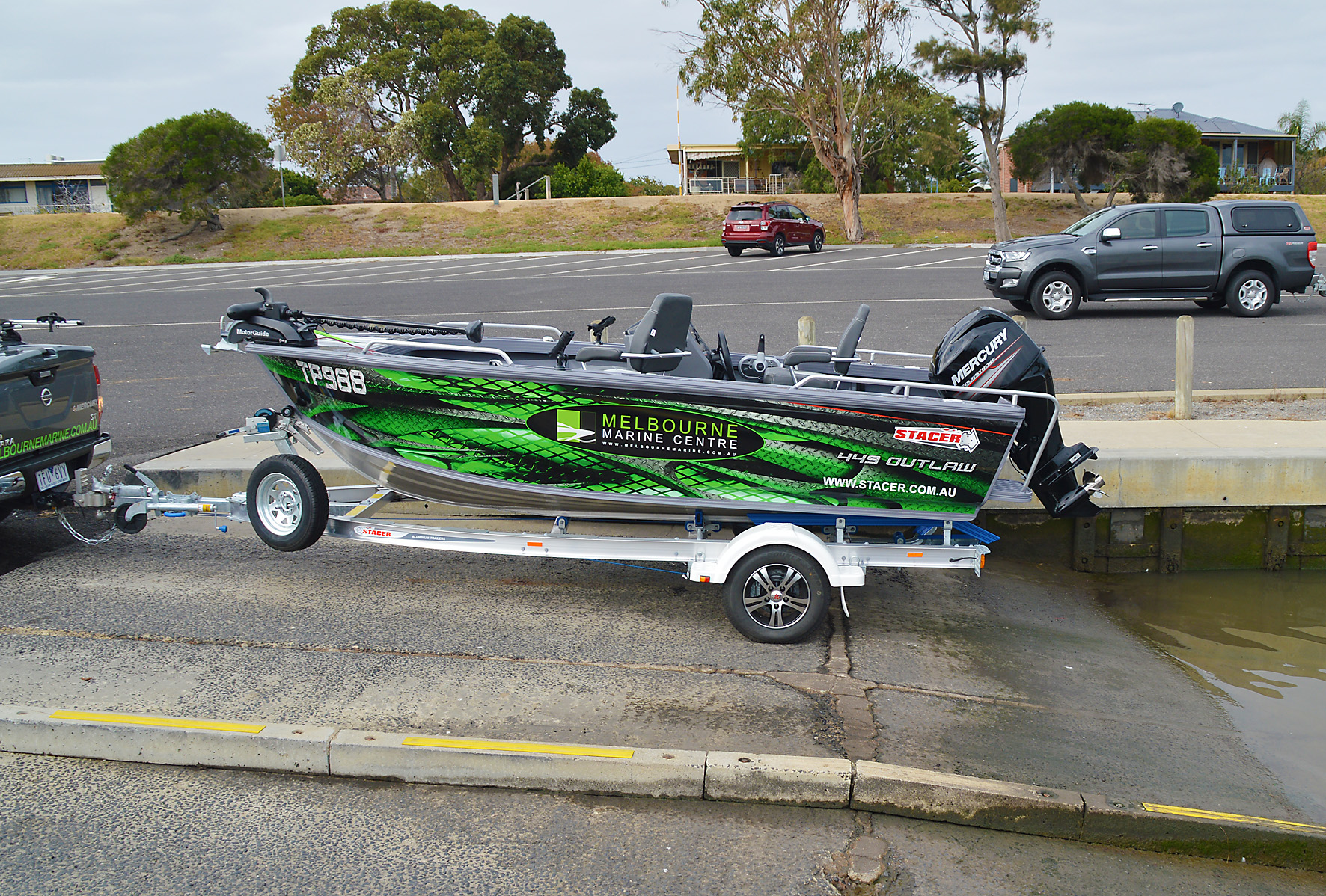 The rig measures in at about 6m, which means that it’ll fit in nearly all garages and a single axle means that you can manoeuvre it around. 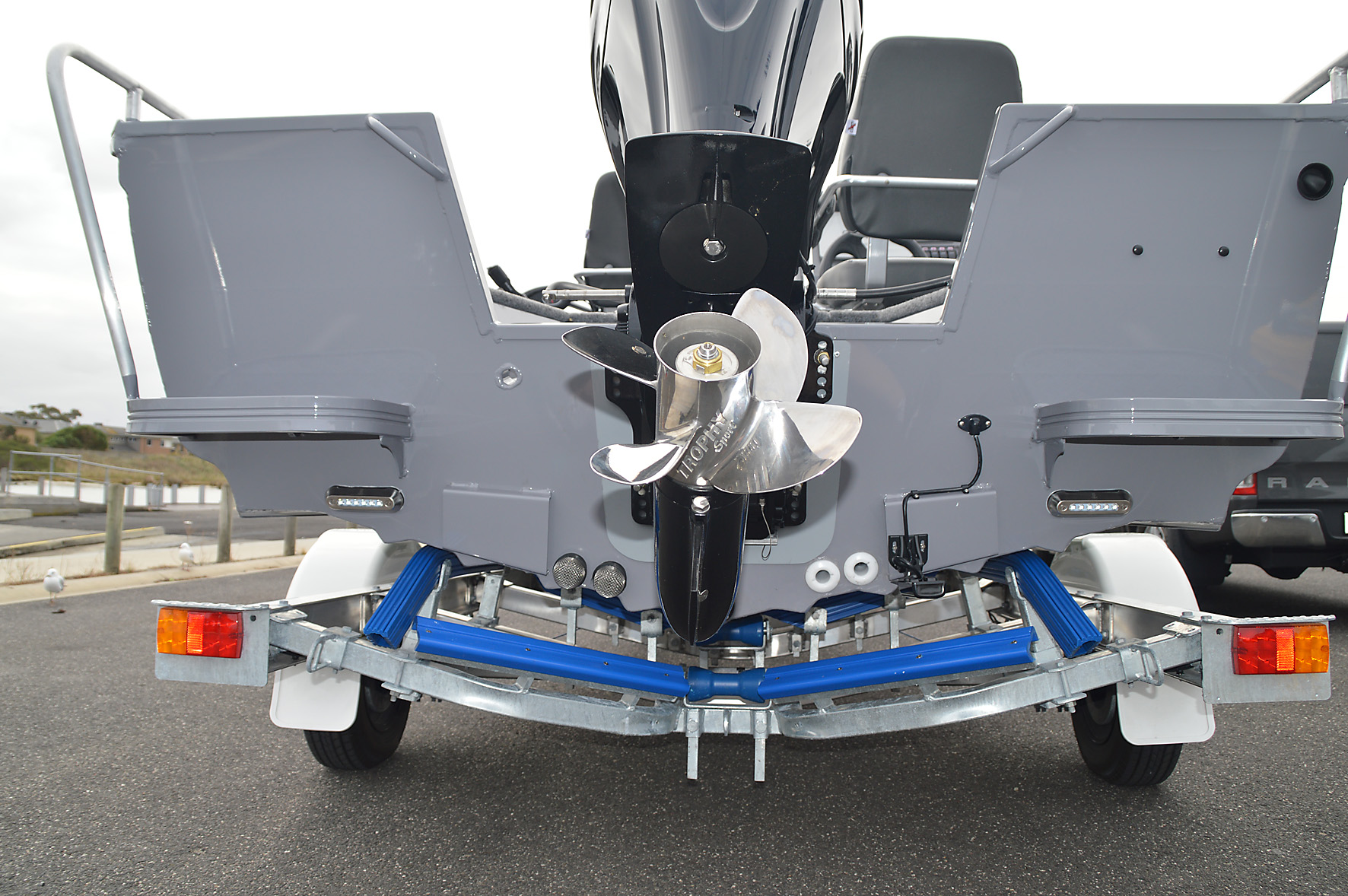 The shaped transom deadrise is a real Telwater trait. You can also see that there’s properly strained livewell inlets and the standpipes drain back to the ocean. 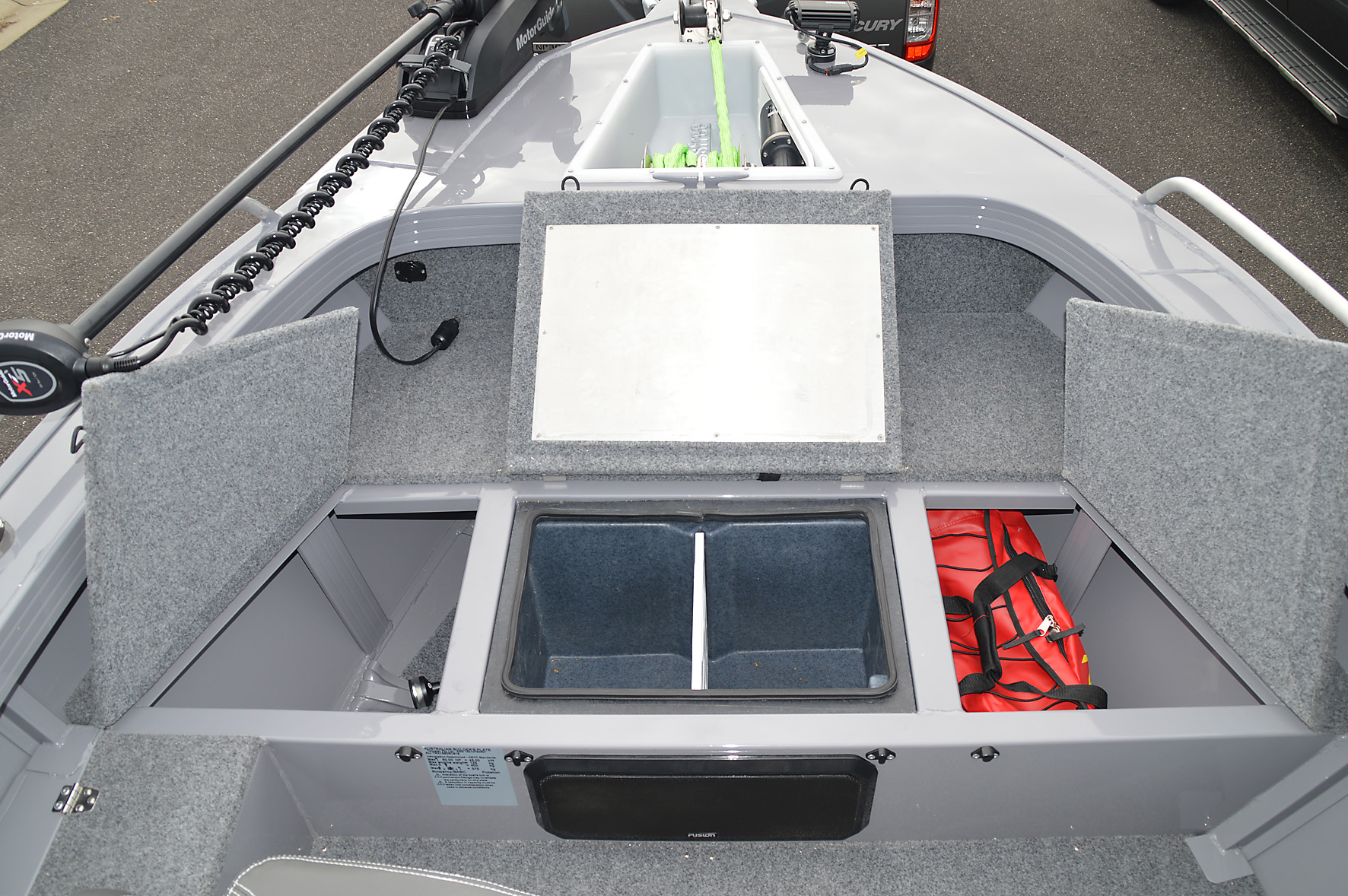 There’s no wasted space up and under the raised front casting deck. 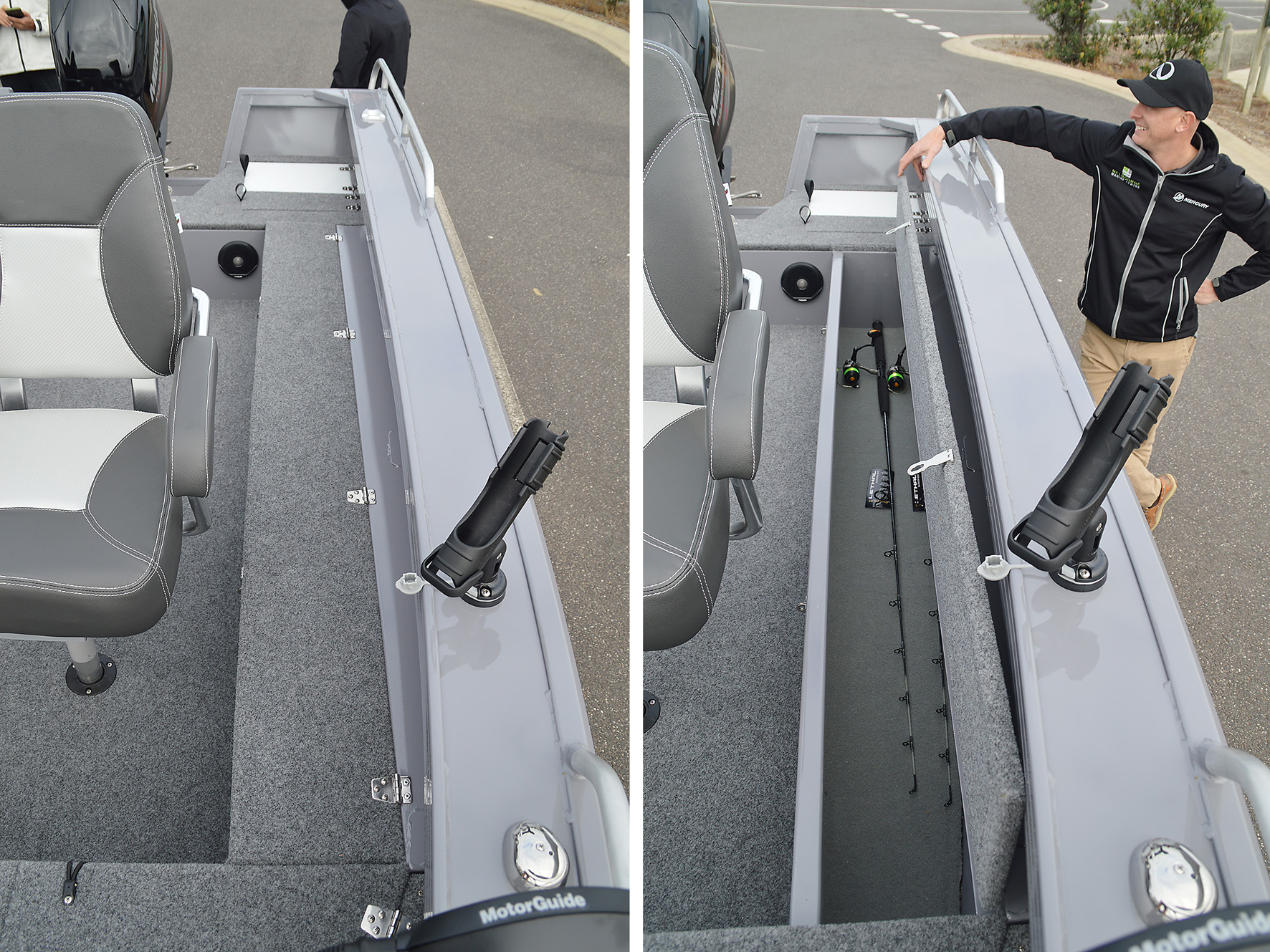 I’m a fan of simple rod lockers – they let you bundle rods while travelling, although this one will be made longer by cutting out the end of the box to get longer rods in. 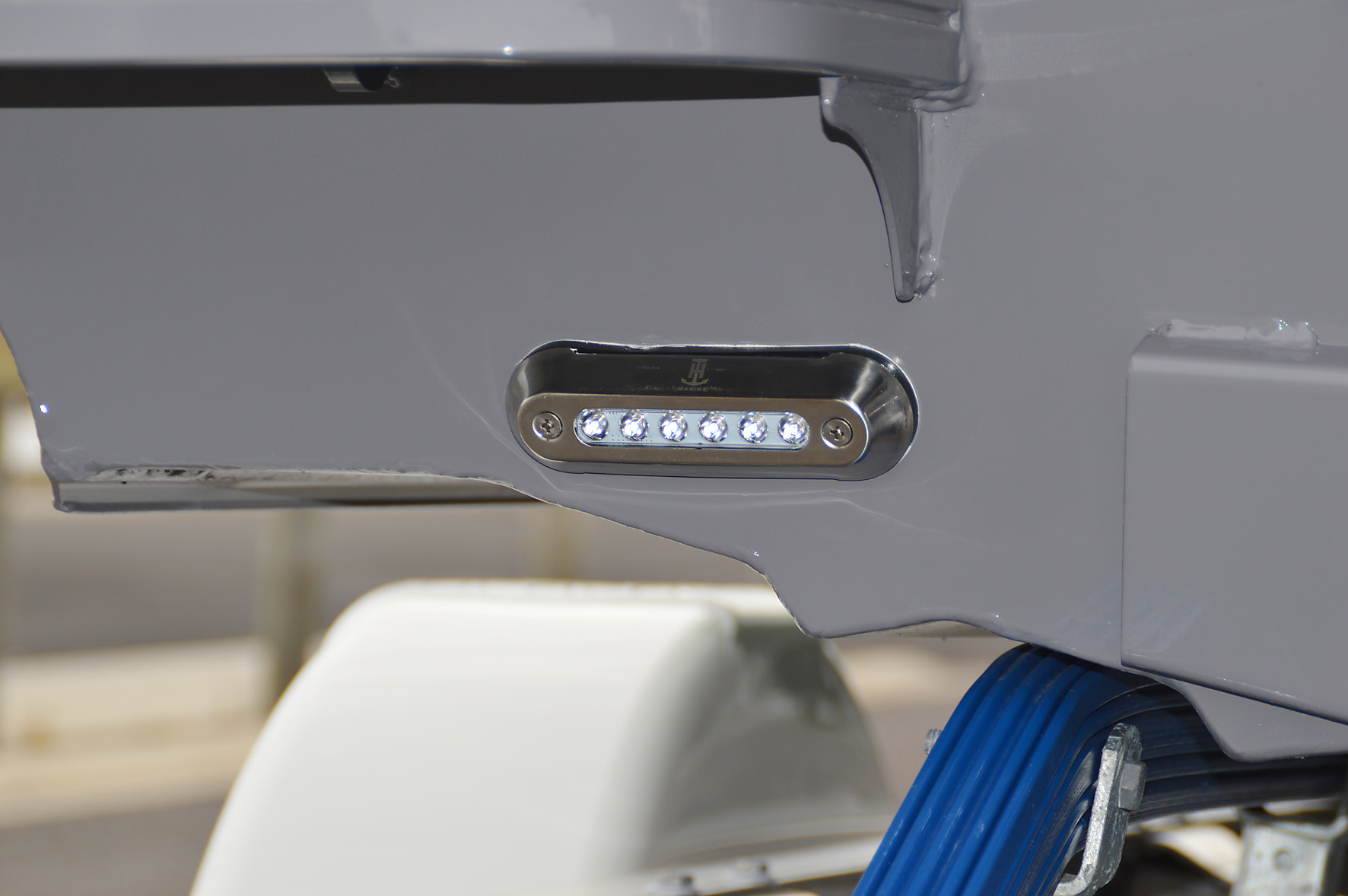 Everyone needs a set of these in their boat – anything from grown men to squid are mesmerised by them. 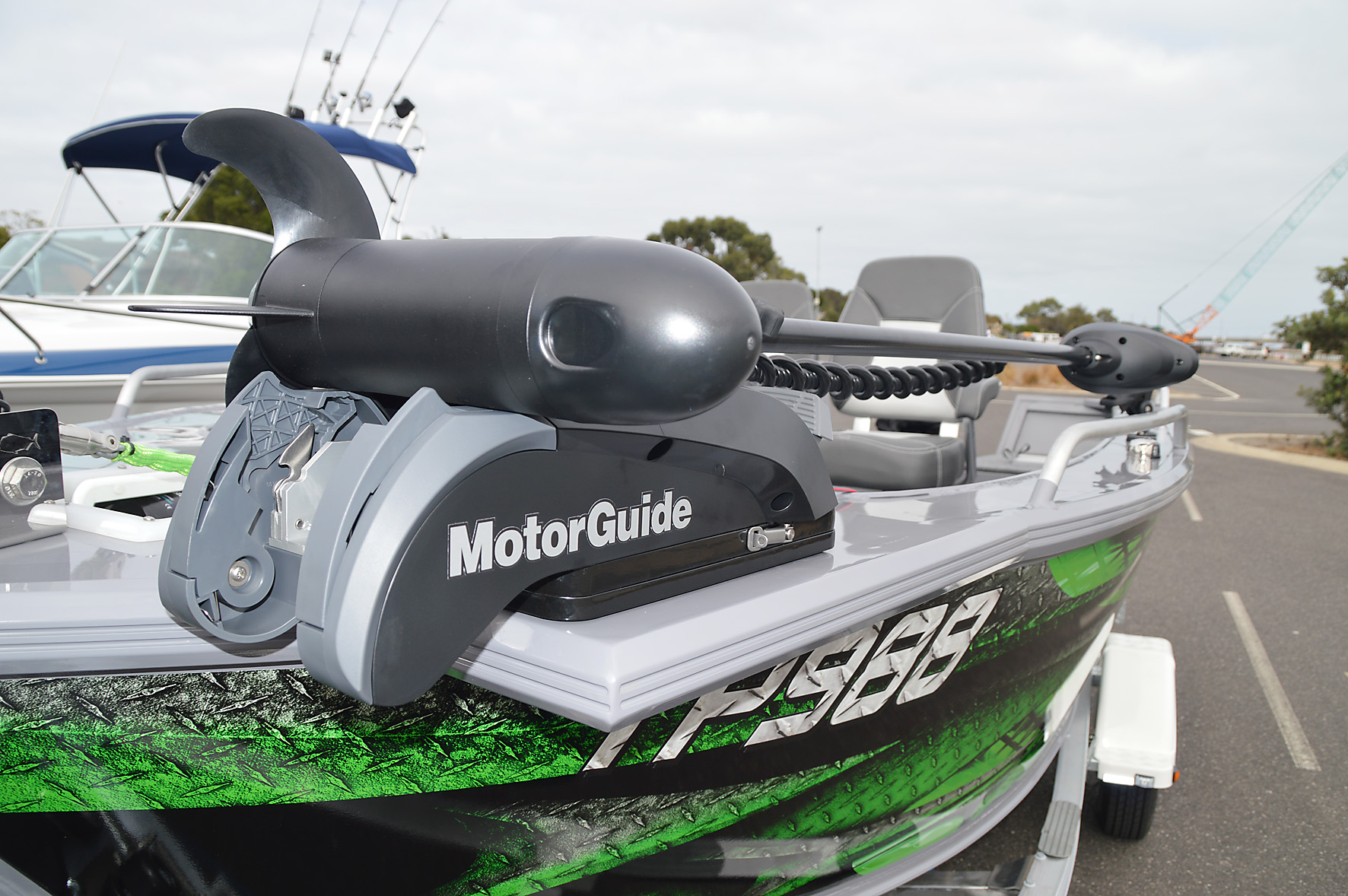 Nowadays, there aren’t too many people who would put together a rig like this without a bow-mounted electric motor. A stealthy approach and the ability to help position while drifting are core to many modern techniques. 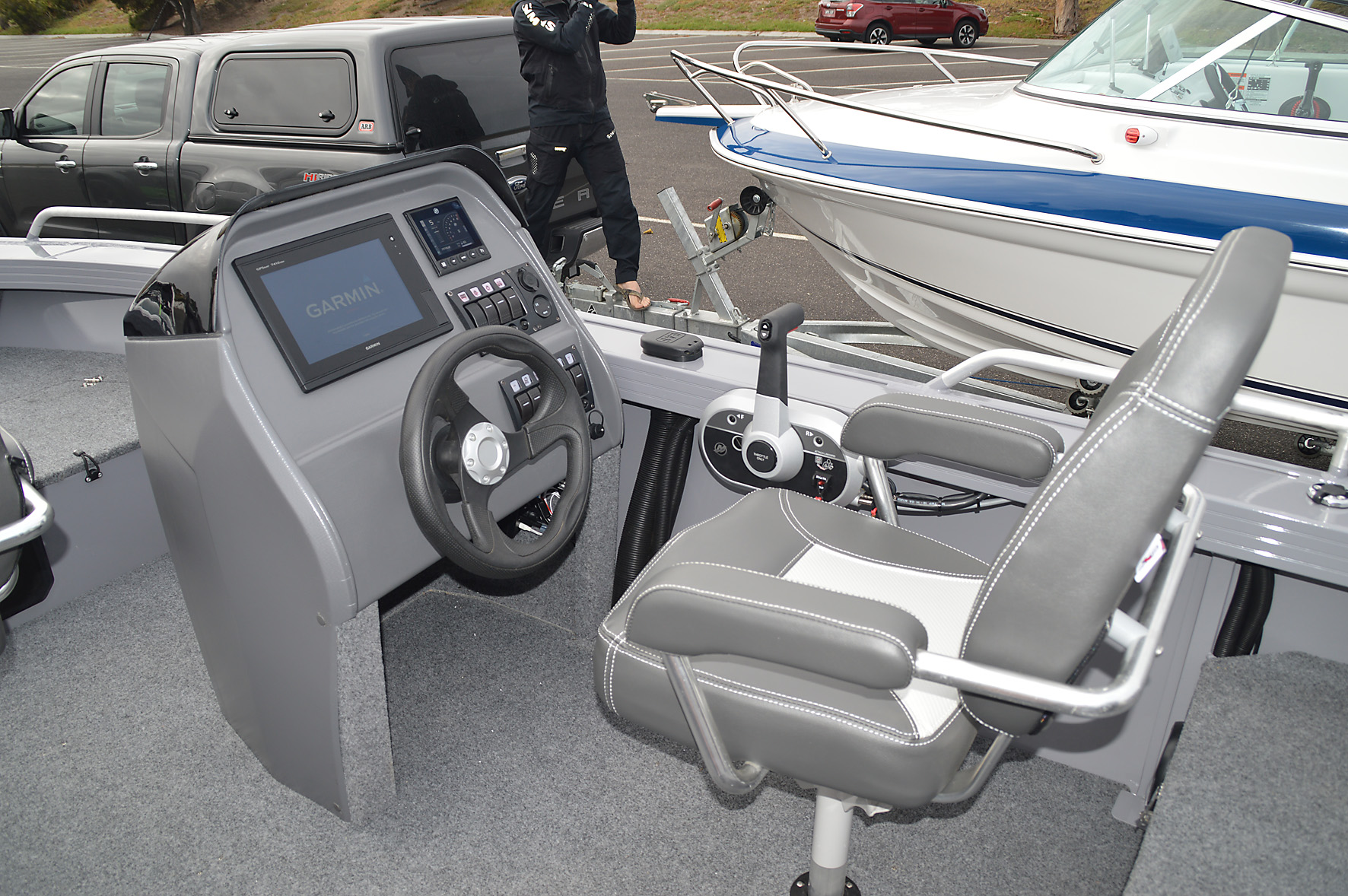 We loved the armrests on the helm seats. And we also liked that all accessories are flush mounted and not hanging out the side on RAM mounts. 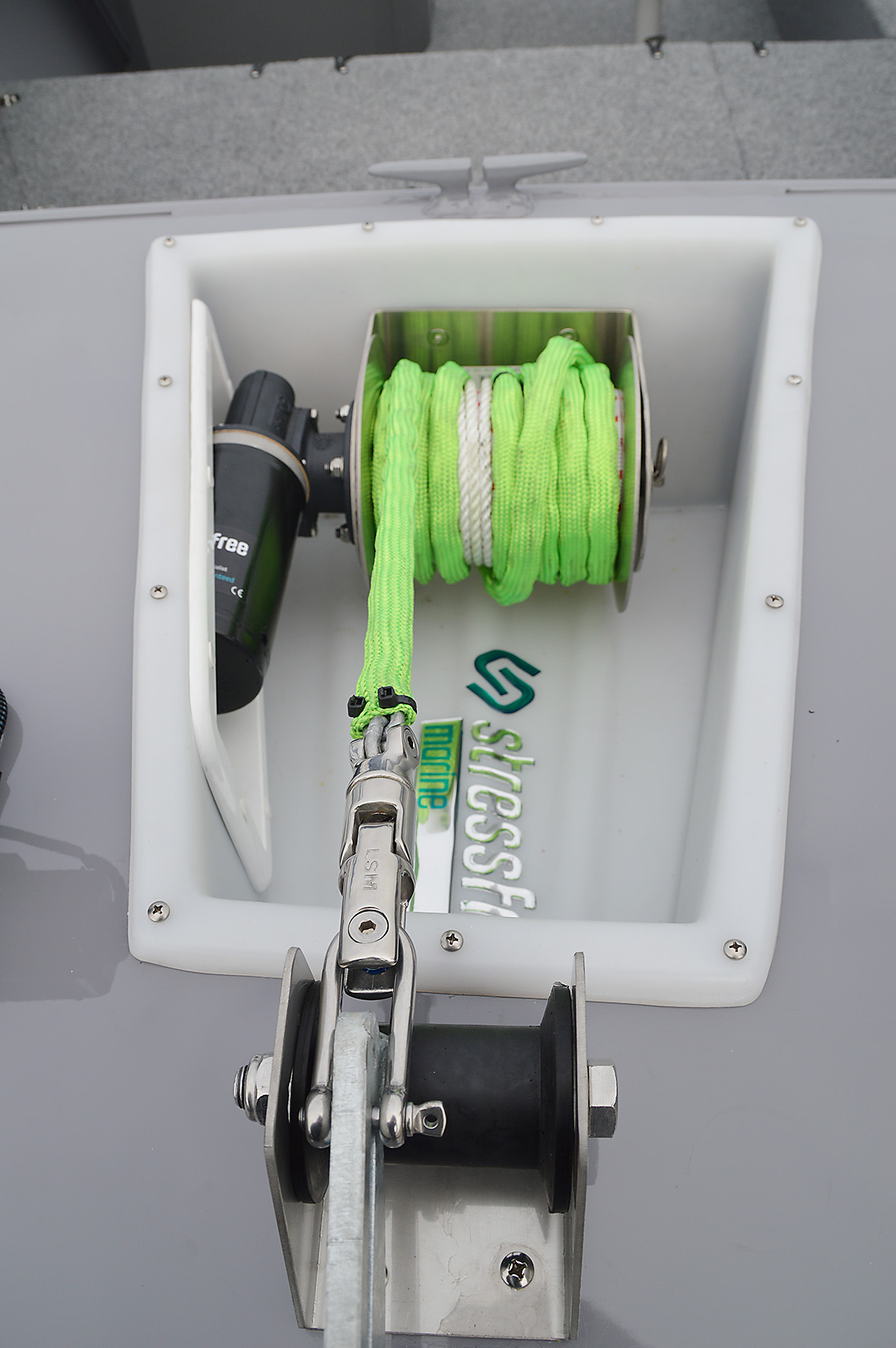 Is the Stressfree anchor winch an overkill? Not if you anchor up and bait fish a lot. Once you’ve had one you’ll never be without one again. 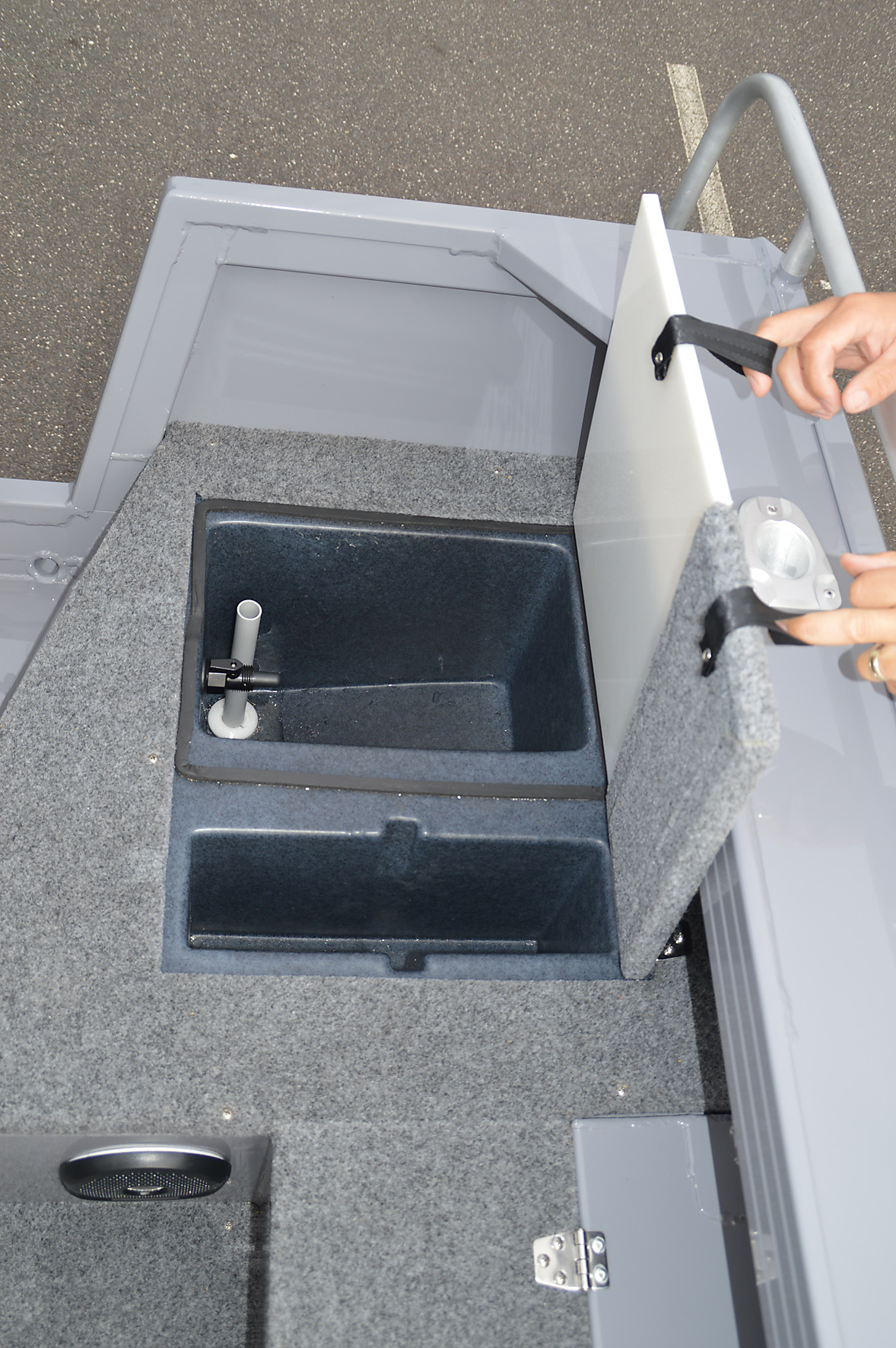 The rear livewell is more of a bait well, but is plumbed just like the big unit up front. 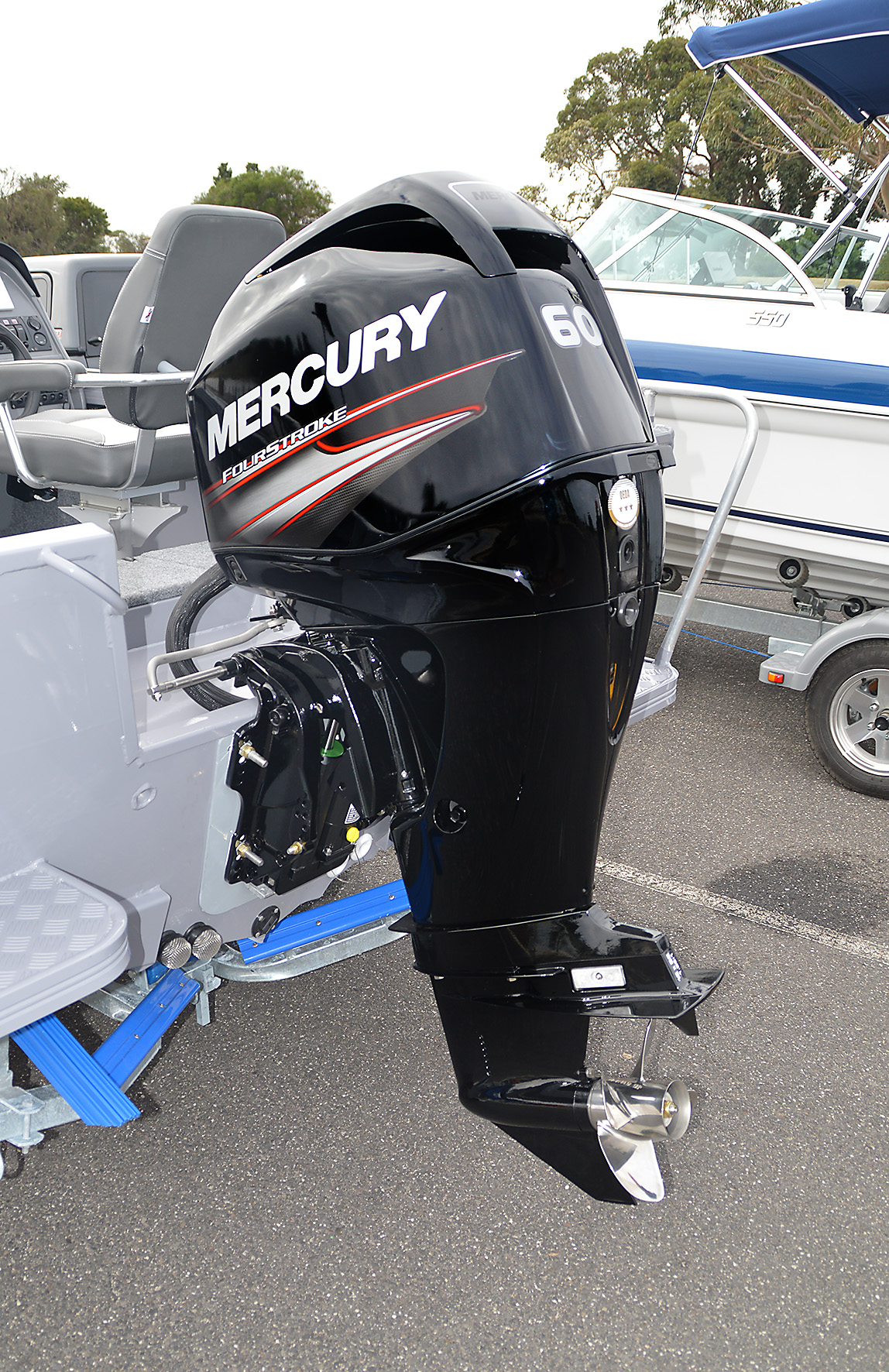 The fifth generation Mercury 60hp 4-stroke works with all SmartCraft gauges, including the flash VesselView 4 at the dash. Peak economy of 3km/L is also up there. 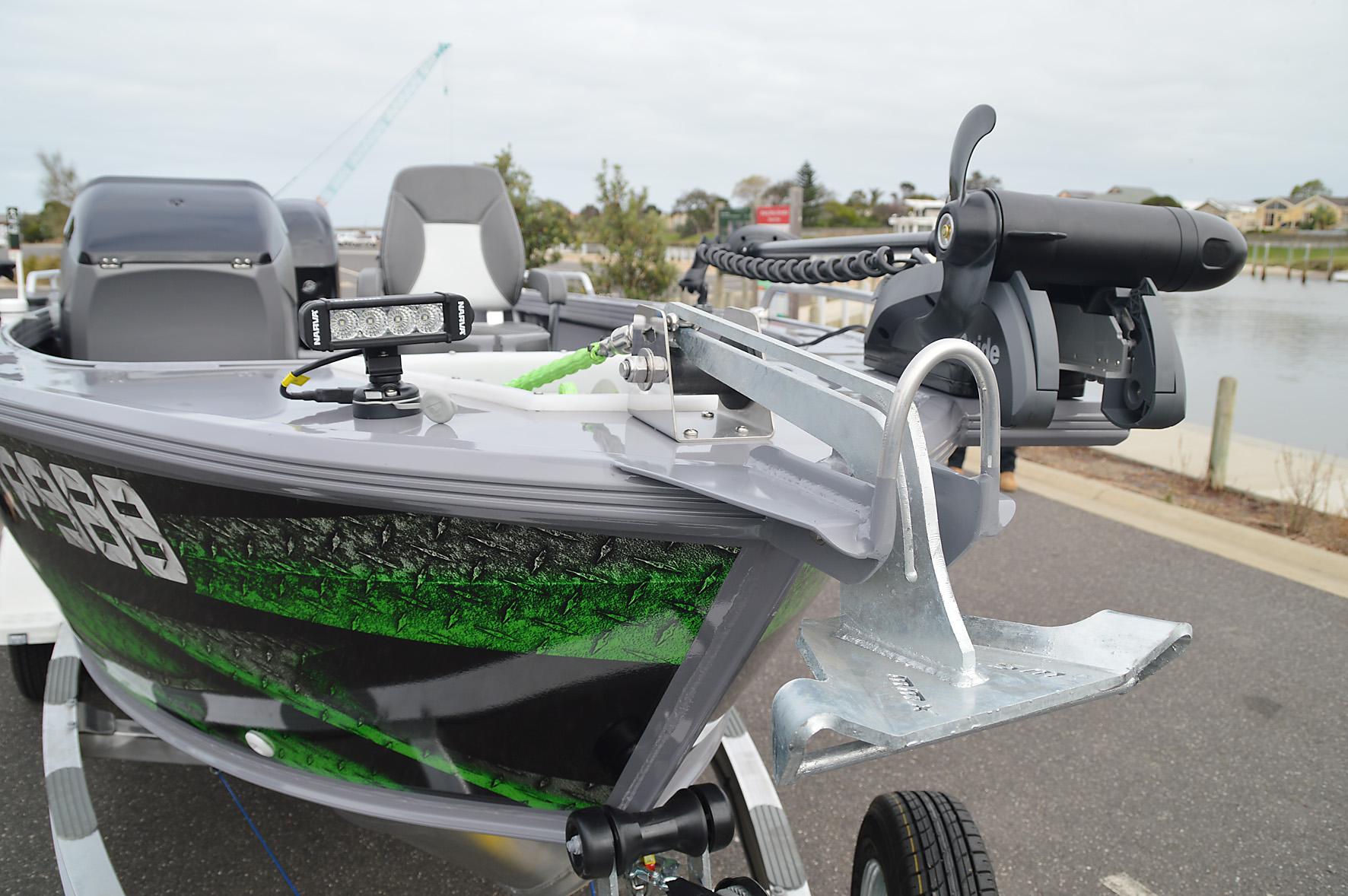 Every pimped-up boat needs a set of headlights, right? They are remarkably practical while driving at night. 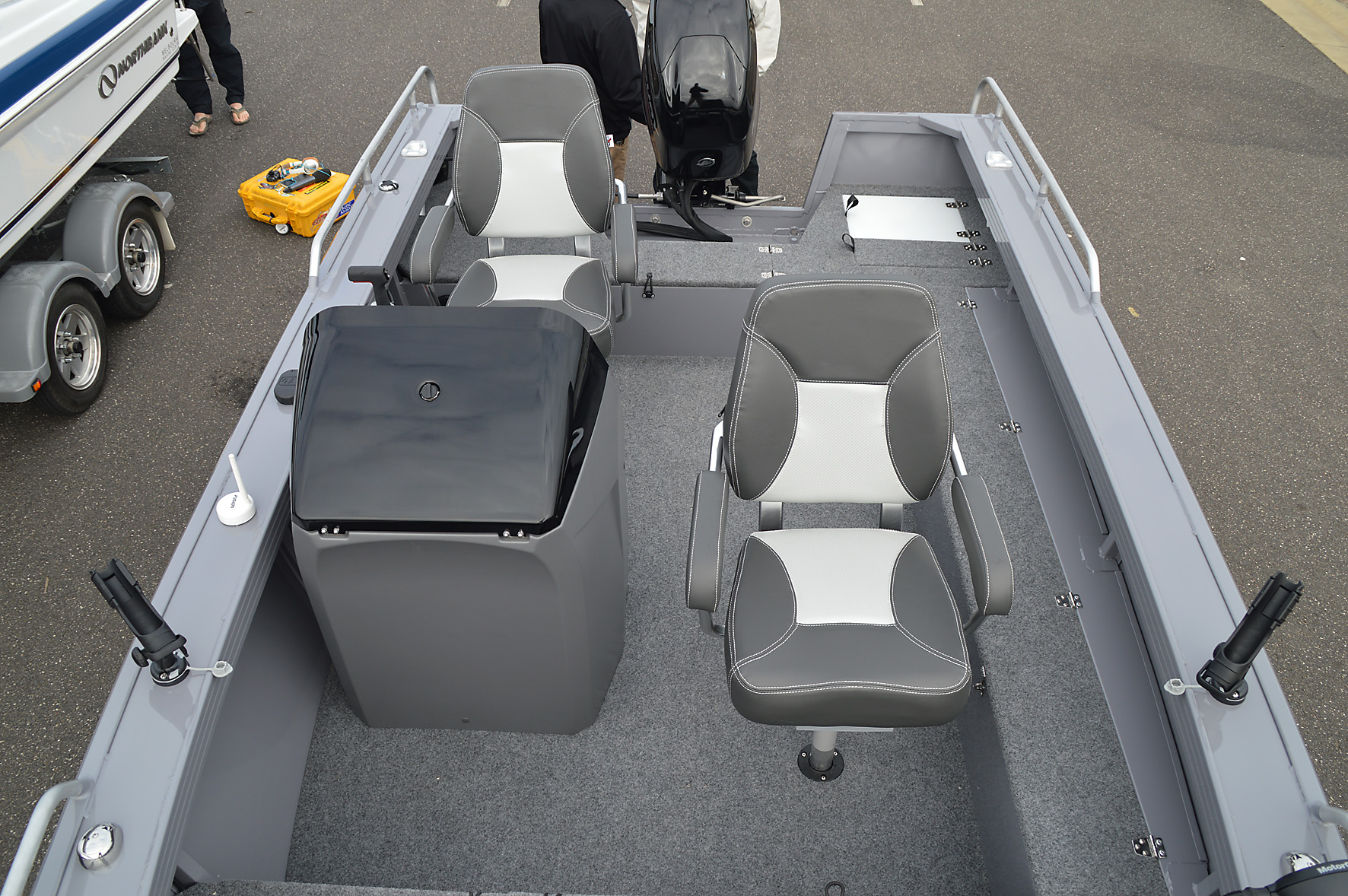 You can’t see it in this pic, but there’s plenty of storage under the windscreen in a dedicated box!

In that light, let’s run through some of the options that are in this little pocket rocket.

From the bow, there’s a Stress Free anchor winch and MotorGuide Xi5 electric motor, which will keep you in place whether you want to be tied to the bottom or not. Under the front casting deck there’s plenty of space and it’s split between a livewell and open storage, as well as the batteries for the trolling motor. There’s also a Fusion waterproof speaker mounted adjacent to the livewell. I’m unsure how this will go with constant saltwater spray and immersion, however time will tell.

Step back again and there’s a rod box on the port side and a well-designed console on the starboard and a pair of helm seats with armrests to complement them. Telwater’s rotomolded consoles keep getting better. This one can flush mount large electronics and there’s clever use of space in the console storage areas, especially in the the one under the windscreen.

The console boasts an array of tech with a Garmin fishfinder, Fusion sound gear and Mercury Vessel View to give you your engine stats.

Fishing in the dark? No worries – there’s a removable headlight, underwater transom lights and under-rail LED light bars to make life easy when the sun goes down.

The whole package is vinyl wrapped with a MMC design that matched Andrew’s company vehicle perfectly – even the valve caps.

With packages starting from around $27,000, the Outlaw is a neat little boat. Turn it into the weapon that MMC has done and it’s a touch under $50,000 to drive away.

When asked if these kitted out rigs are popular Andrew said, “Absolutely! We never have a problem selling our demo boats because our customers usually aspire to this level of accessories anyway. We just help them check the boxes.”

by Steve Morgan • There’s no doubt that there’s a big market in Australia for a family-cruiser style boat. We’ve tested plenty over the years and there’s something special about being able to spend a […]

by Steve Morgan • We hope for windy days while boat testing, but not at the speed that Port Phillip Bay dished out while testing this Haines Hunter 585R (runabout), fitted with a Yamaha F200 […]

by Steve Morgan • You will have read earlier in the year about the big Mercury launch Fishing Monthly attended in Miami, Florida. At that time, the American outboard giant released a naturally aspirated 4-stroke […]