Just the other day I was reading through an old publication written by Lance Wedlick on fishing Western Port and Port Phillip bays back in the 1980s. Old titles always excite me, not just for the valuable information they divulge for catching fish, but more on the movements of fish at certain times of the year, which mostly still adhere to traditional patterns.

One thing Lance mentions is the quality of calamari fishing throughout the Port but says, “Very few anglers take advantage of this fishery.” Thirty years later and that statement still stands true. Is it that anglers are apprehensive to fish the Port due to its shallow banks and mud flats? Even experienced anglers can have trouble here. Or is it just the lack of access – not just for boat anglers but even those in kayaks, jet skis and for land-based anglers? At a fair guess, I’d certainly say all of the above. Port Phillip Bay is much more ‘user friendly’ for launching, accessibility and deep-water factors, especially for those new to boating and fishing alike.

Despite Western Port sounding like a waterway too difficult to navigate, it is without question the most consistent producer of XOS calamari in southern Victoria.

THE FIRST APPROACH
Calamari is a viable fishing option for most of the year and they are widespread right throughout the Port. Although everyone gets excited to go fishing, being set up correctly is the first port of call. The first thing to note is that calamari aren’t going to spool you, nor are they going to really test your tackle to its limits so you can afford to lighten up a bit. In fact, the majority of calamari you going to catch will be under the 1kg mark with the odd few at certain times of the year exceeding 2kg.

In Western Port, calamari can be targeted using two main techniques, the first with an artificial lure known as a squid jig and the other using a bait such as a whole pilchard or silver whiting threaded onto a squid jig. Cast it out if you’re land-based or float it out the back of the boat while suspended under a float. Either way is as effective as the other except you will have to work for your catch with artificial jigs.

Baited jigs from the boat tend to be fished with a handline, while from the shore a weighted bobby cork float is placed on 1m of leader between a swivel and the squid jig so it can be cast distance and left to float over the weed beds. This technique involves a surf rod with suitable reel to gain the distance required.

The outfit used for casting artificial jigs tends to be a 7-8ft specialised egi rod specifically designed to cast such a jig and get maximum performance and manipulation of it when worked. When you work a squid jig, a fast vigorous technique is required in order to make the jig work similar to that of a fleeing baitfish, something a squid might be familiar with hunting daily.

In the majority of cases, a small reel such as Shimano 1000 or 2500 series loaded with 6-10lb braid is more than enough to cope with them. In saying that, you will want to run a good 3m length of 5-6lb leader with excellent abrasion resistance to withstand being rubbed over reef and weed, the common habitat of southern calamari. Jig selection is also critical due to the current flow of the Port. When on the hunt for calamari it is a good choice to upsize artificial jigs to a 3.0 but as the tide increases in strength, go to a 3.5, especially when fishing in depths greater than 5m. 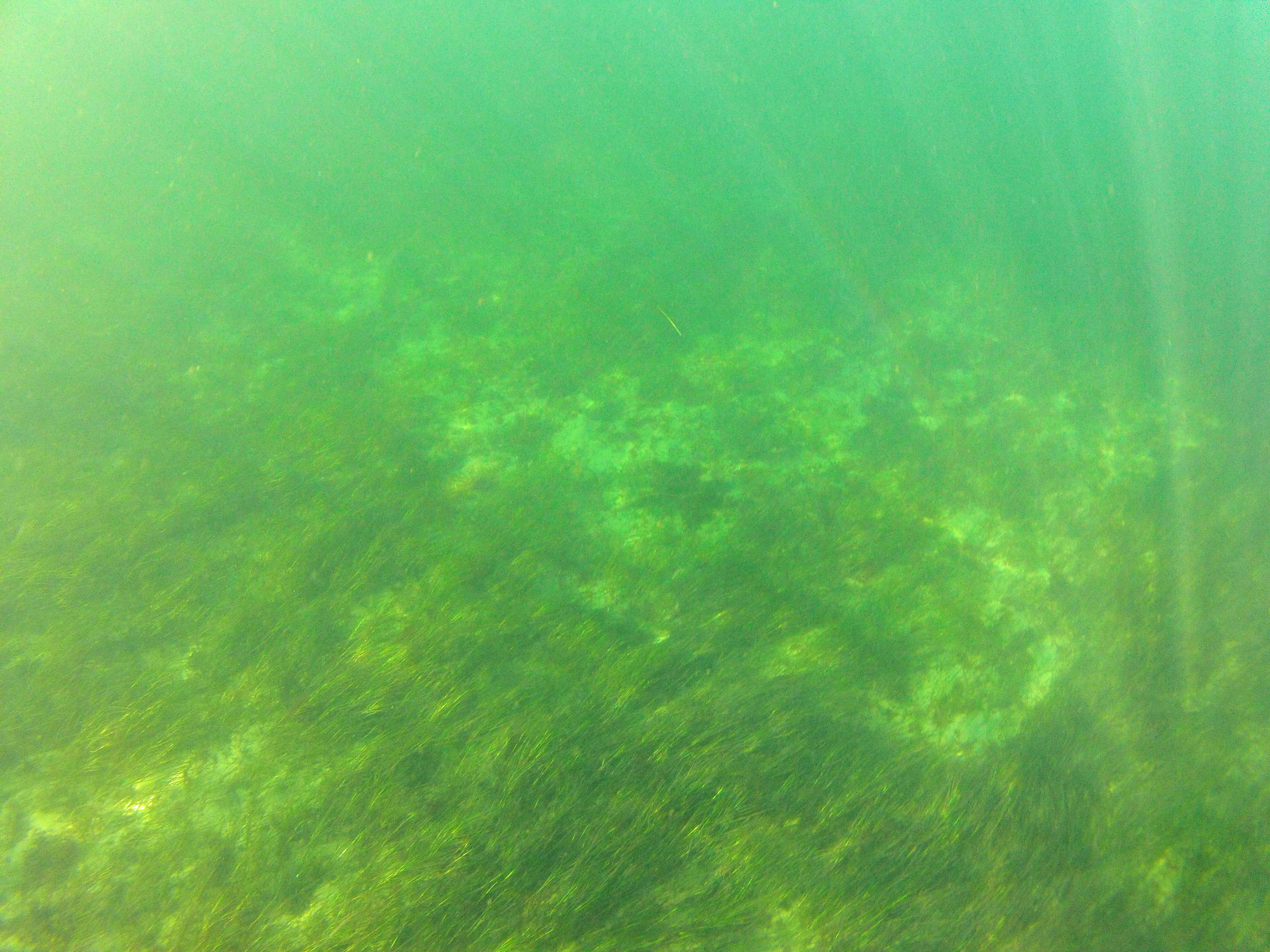 Large calamari enter the Port to breed and lay eggs from September through to early March. Look for extensive seagrass beds around the entrances into the Port. 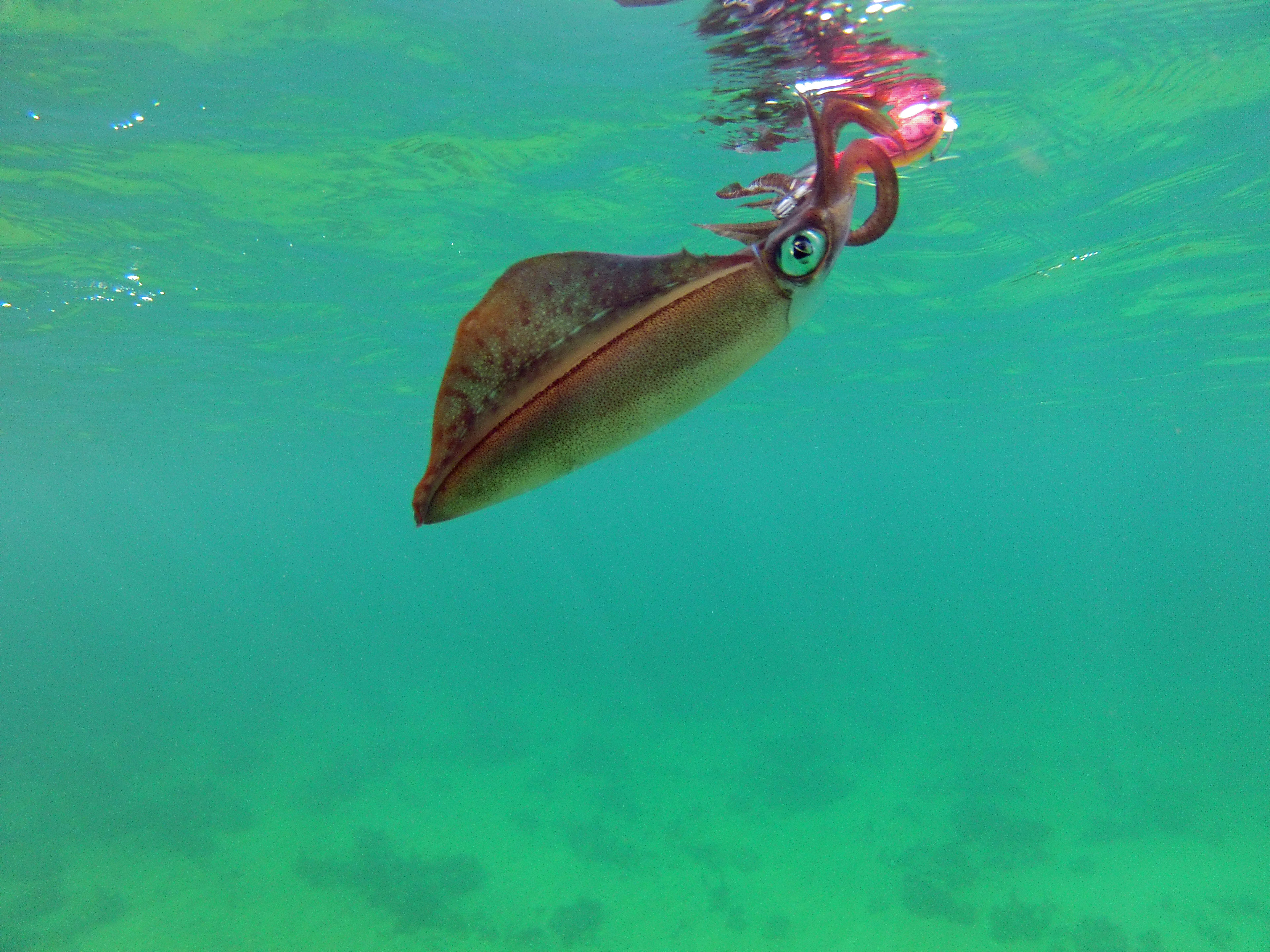 Big calamari are quite aggressive and territorial when spawning. Be aware that the cloth on your jigs can and will be torn apart. 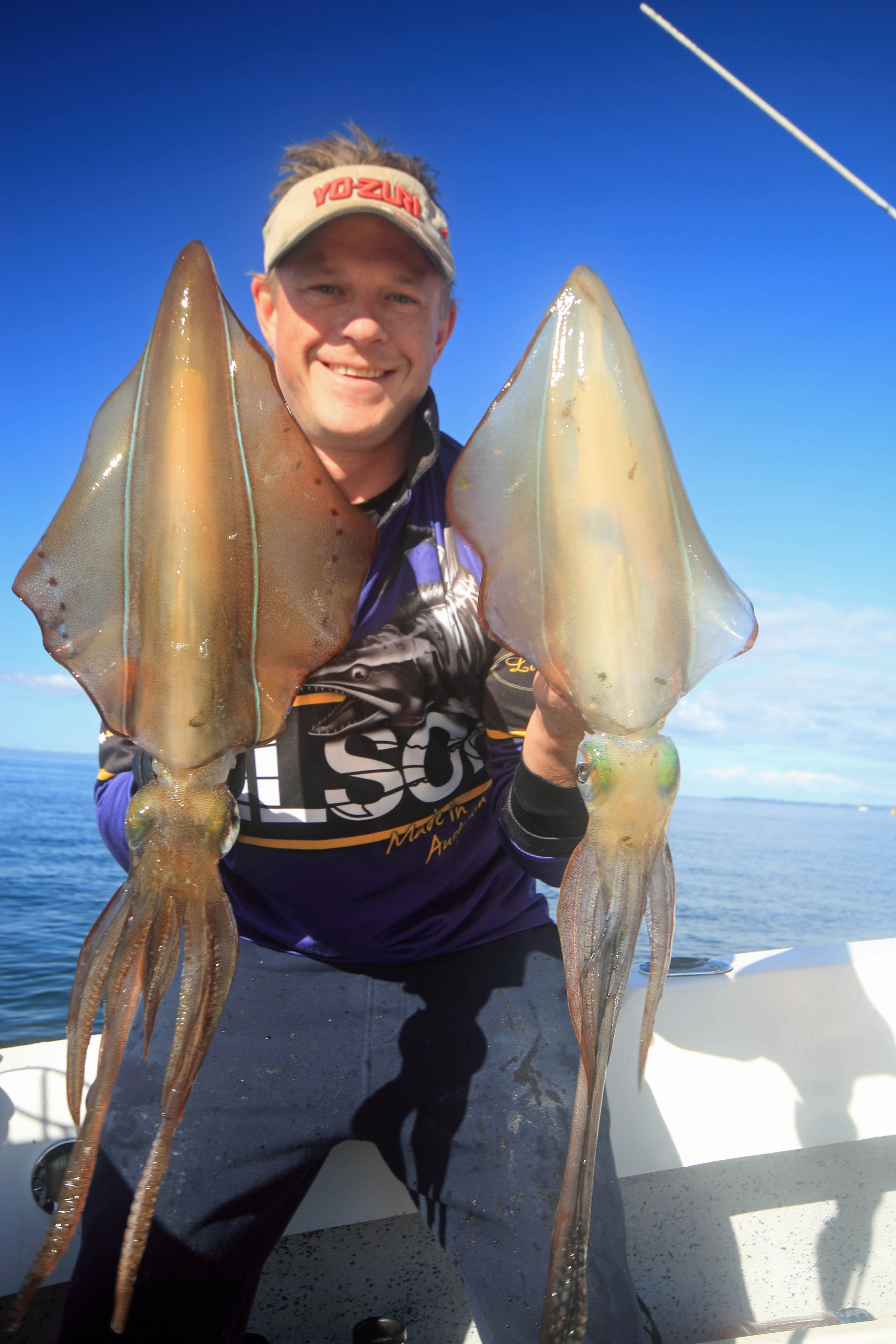 When you locate calamari, don’t drive off to find another patch. Calamari hold up in numbers so if you drift from the area, go back and drift the same line. 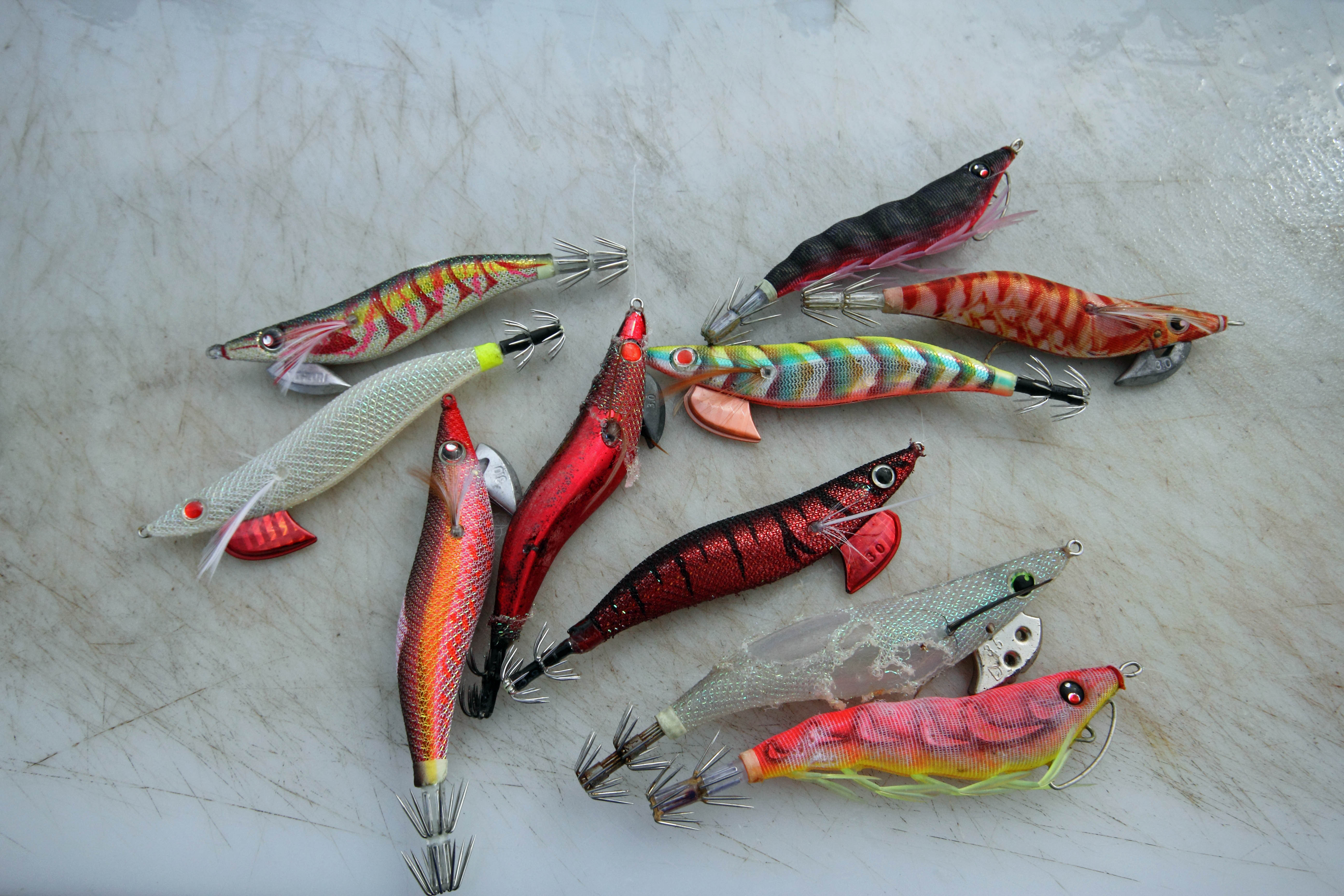 There are numerous jigs on the market. Size 3.0 in white, red, red foil, black/red and orange/green colours work exceptionally well. 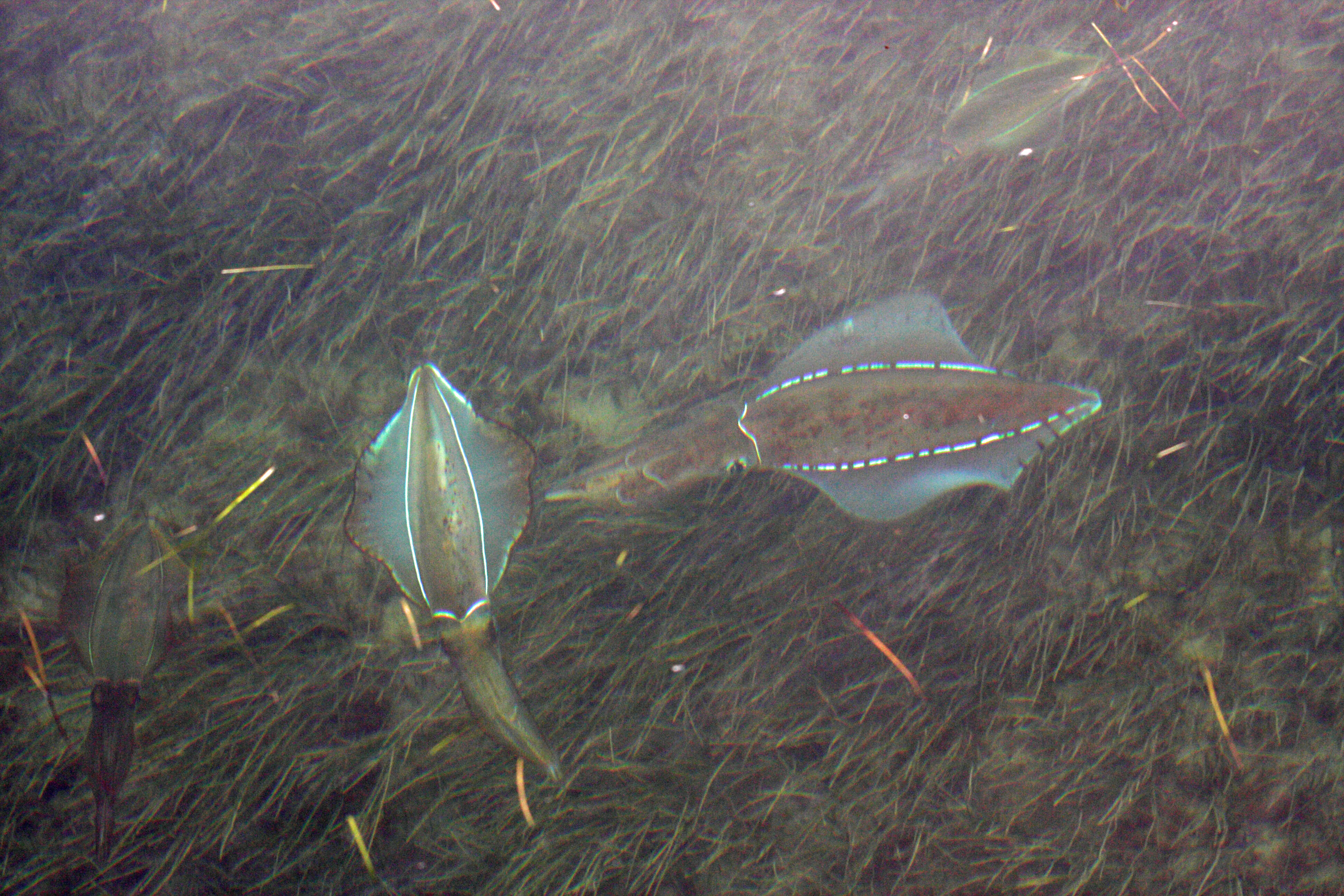 When you locate calamari in shallow water, the bite is often triggered by aggression. Big jigs in a 3.0 and 3.5 are ideal. 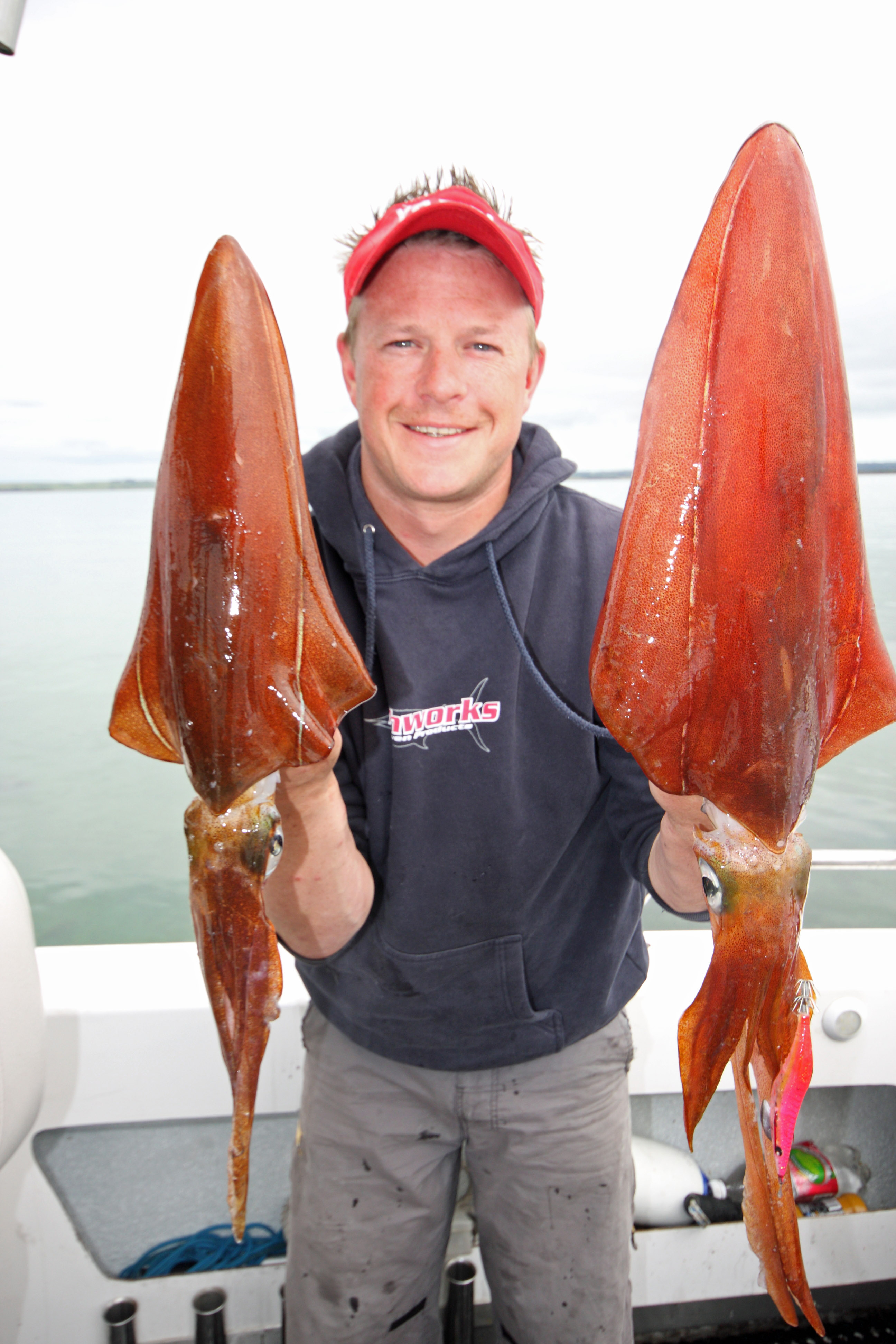 Often, large calamari are found in depths of 3-5m. Be sure that you work the chosen area well before moving off. 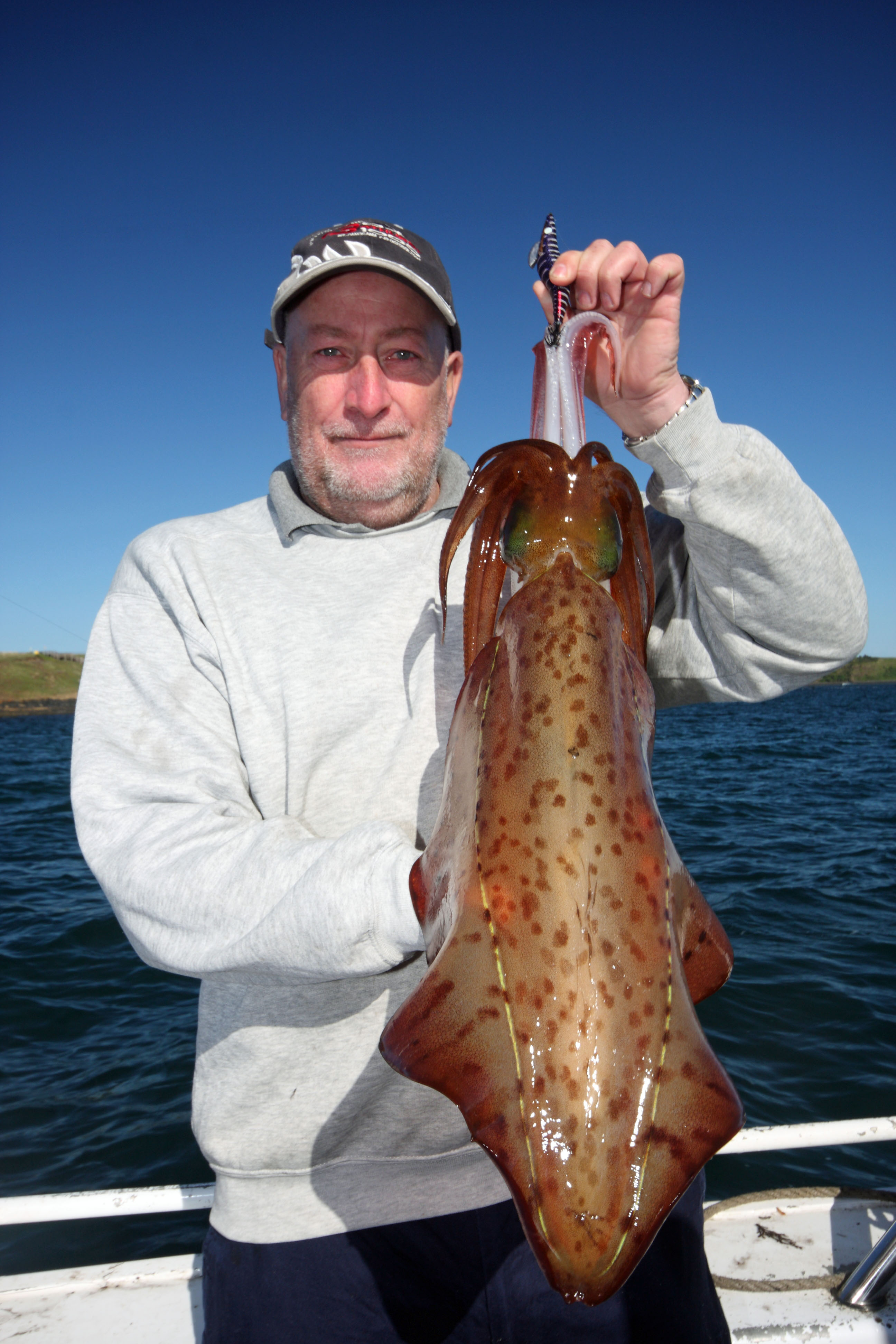 Although the bottom end of the Port is where you’ll find the majority of larger-sized calamari, don’t be afraid to drift the Quail Bank, Tyabb Bank and top of the Middle Spit in September. Cat Bay is also known to produce big calamari. 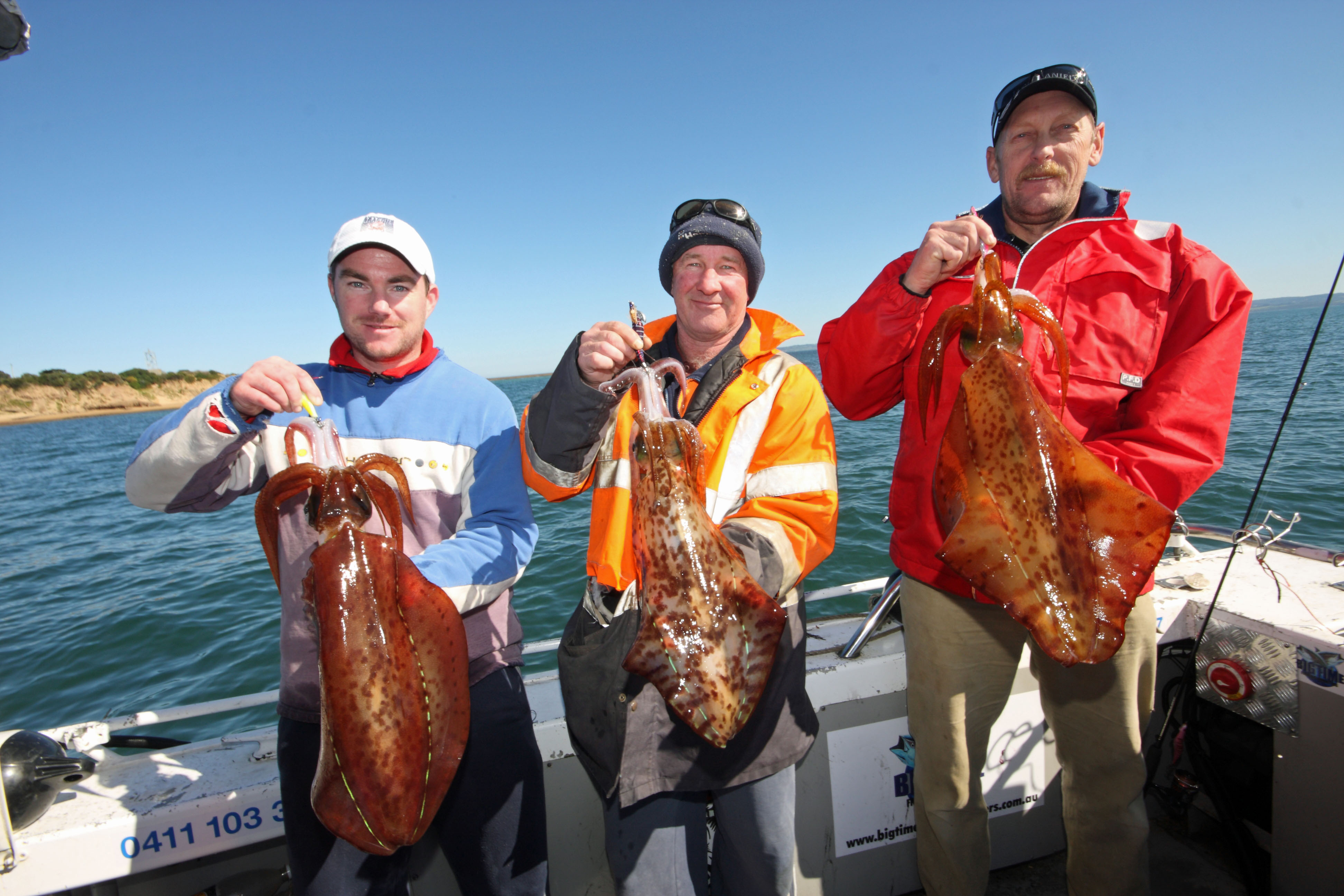 When you do find them, they are about in big numbers! 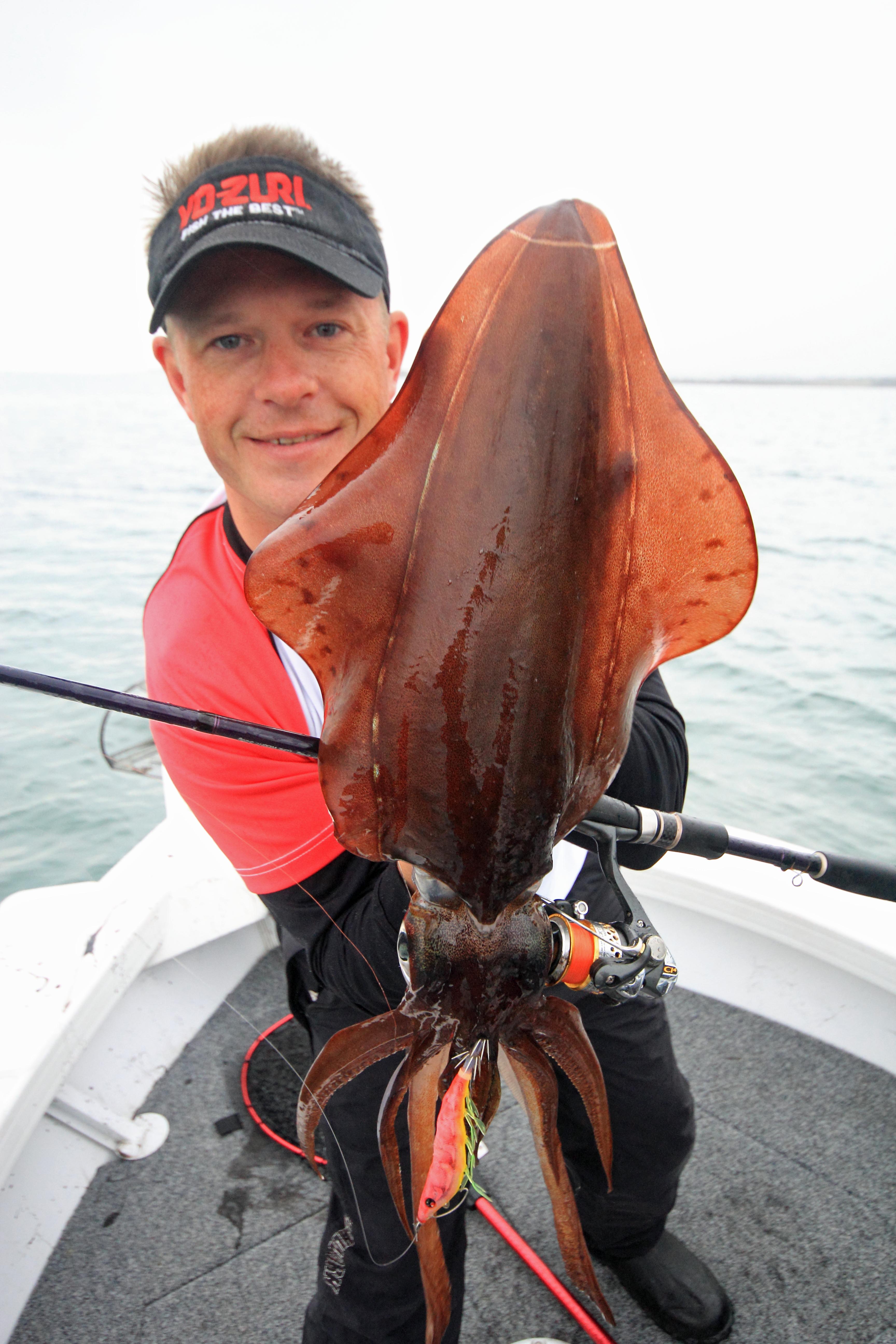 When targeting big calamari, always ensure you have your reels drag set accordingly. Calamari this big are tough contenders – if you go too hard you could break your leader or pull off one of their tentacles. 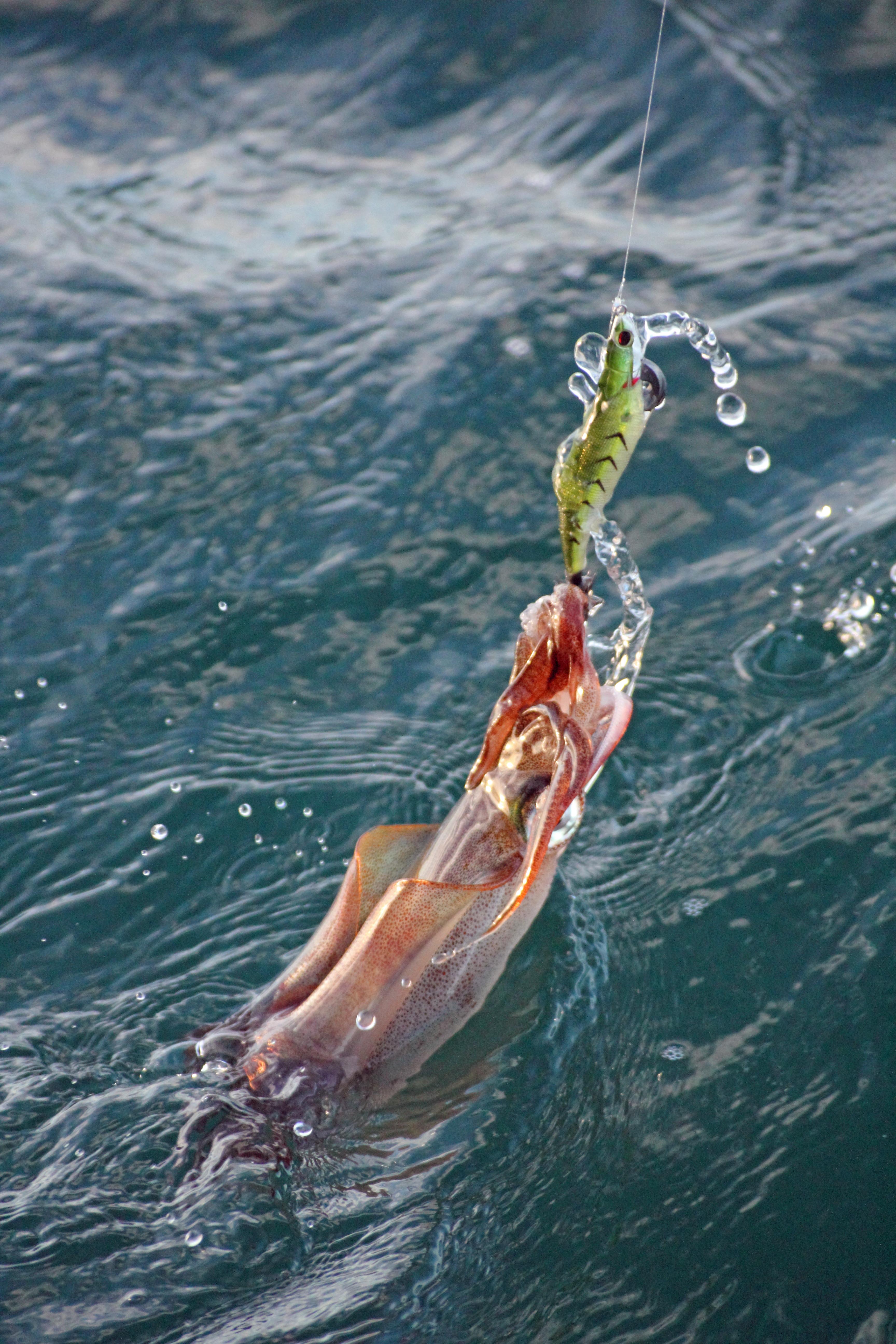 Always watch the ink, the bigger they are the more ink they shoot! 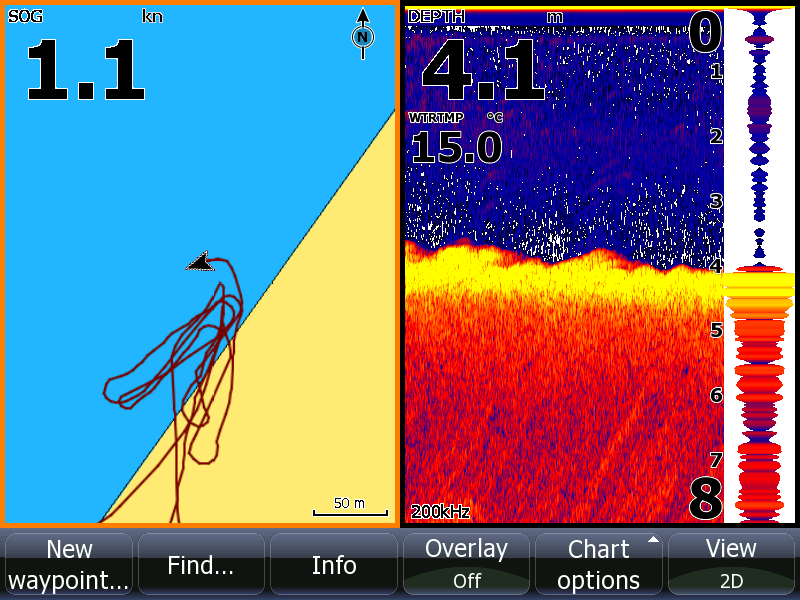 When you drift over a patch, always go back and re-drift the same area.

WORKING THE TIDES
Western Port is a waterway that inexperienced anglers can be put off from fishing due to tidal fluctuation and exposed mud banks that seem to appear out of nowhere in the blink of the eye. When it comes to targeting any species in Western Port, understanding the tides is the first and most important piece of the puzzle and if you get this wrong you could find yourself high and dry on a mud bank or, if land-based, wading across knee deep mud in an attempt to reach the water in which you may just not be able to.

Understanding the tides is vital for all anglers to be successful not just to catch fish but to fish the right locations at the right times. Calamari are particularly responsive to tides, and in Western Port due to the fluctuation, they will become trapped and die if they stay on the shallow banks.

Calamari are typically found over weed beds where they spend their life hunting for small crustaceans and baitfish.

Throughout Western Port, these weed beds are located on the banks and thus during a low tide are exposed, while on the high tides are fully covered with water where the calamari can get right up into the weed and go on the hunt.

During these times it is easy to catch calamari, but you have to work the tides. On the high tide when the banks are covered, get up into 2-3m of water and work them as thoroughly as possible, while during the run-out tides, retreat back to the edge of the bank and work that. You’ll find that as the tide abates, the calamari move into deeper water, as will the crustaceans and baitfish they hunt.

On the low tide, the crustaceans and baitfish will disperse in the channels and the calamari can be caught in deeper water – say anything ranging between 5-10m, even during the slack water.

WHERE TO FIND THEM
Catching calamari is simple in itself, it just takes a lot of casting and working weed beds before actually locating where they are holding up.

Often, when you catch one calamari there are quite a number of them all in the same area. This is because they tend to congregate in schools and more so during spawning.

The general spawning season runs from mid-August until late October. Of course large calamari can be caught anytime, but the spawners, which can weight up to 3kg are generally about at the start of spring.

When targeting such models, you really do need to concentrate on certain locations. Your best shot will be heading to Somers, Ventnor, Flinders, Cat Bay, Cleeland Bight and Dickies Bay. All these locations feature the same characteristics – high current flow, clean water and good weed beds where the calamari lay their eggs.

When you do locate a potential location, the procedure is quite simple, pick your drift line, cast out your jig selection and begin working the jigs over the weed bed. Once you have completed your first drift, motor back to the beginning, stopping a few meters to the left or right and re-drift next to your previous drift line and continue the process until you hook-up. Once you do, motor back up and repeat the same line – continue to do so even if your next cast results in nothing. Where you catch one calamari, you will catch more so keep working the area.

by Brett Geddes • I reckon you experience as much excitement and pleasure while organising, planning and driving to a much loved fishing location, as you do actually being there and hooking fish. During the […]

Snapper and the great rig debate

by Jarrod Day • Since the dawn of time, there’s been a conundrum about which rig is the right one to use when targeting snapper throughout Victoria. Unlike many other states where snapper are caught, […]