Paddling the canals of the Patterson Lakes Complex in your kayak, you could believe you’re holidaying on the Gold Coast, until the cold chill of Melbourne winter brings you back to reality. The weather may not be as spectacular on the Patterson Lakes canals, but fishing certainly can be. Offering a plethora of pontoons, pylons, wharfs, boat hulls, docks, rock walls and mud flats, the area is cram-packed with fish holding structure. It might be the best place to catch a bream in the greater Melbourne area.

Access
Patterson River Boat Ramp is undoubtedly the best launching option for kayak anglers in the area. Less than 30km southeast from Melbourne’s CBD, the ramp can be accessed via Launching Way off Macleod Road, Carrum. Facilities at the ramp are excellent and include four concrete ramps, floating pontoons, public toilets and a massive car park. Despite its size, the ramp can get very busy, particularly during snapper season. I prefer to launch outside of peak times to avoid the queues. My preference is to launch at ramp four at the eastern end of the boat ramp, it sees far less boat traffic and is closer to the entrance to the canal system.

Target Species
Southern black bream are the main target species for kayak anglers fishing the Patto Lakes. However, they’re not the only species on offer in the system. Estuary perch and mulloway are also an option at certain times of the year, and can offer a very welcome by-catch or be targeted specifically when conditions are right.

Fishing Methods / Techniques
When chasing bream in the canals at Patterson Lakes, there’s a vast range of techniques that will get you a bite. The key to success is working out which technique is working on any particular day. During warmer months, when bream are actively seeking bait and sitting higher in the water column, I prefer to focus on fishing structure. Bream will often hold under boat hulls, floating docks or pontoons, so casting accuracy is critical.

Casting crab imitation lures tight against structure is a dynamite method of catching bream at Patto Lakes. Once the crab hits the water, keep a ‘belly’ of slack in your line. Pay attention, the slack line will allow the crab to fall down through the water column as naturally as possible. Often, bream will hit the crab is it falls, so watch that belly for anything that indicates a bite. If I don’t get hit on the initial drop, long pauses followed by subtle movements of the rod tip will often result in some interest.

Once hooked, tight drags are required. Heavier leaders allow you pulling power to extract the fish from all that structure. Bream are notoriously dirty fighters and will do their absolute best to get back home and bust you off. Similarly, small vibration style hardbodies such as Strike Pro Micro Vibes are super effective and have accounted for countless Patterson Lakes bream over the years. Fishing the structure doesn’t just limit you to crabs or micro vibes, sinking bibless minnows, stick minnows, are another effective way to entice bream. 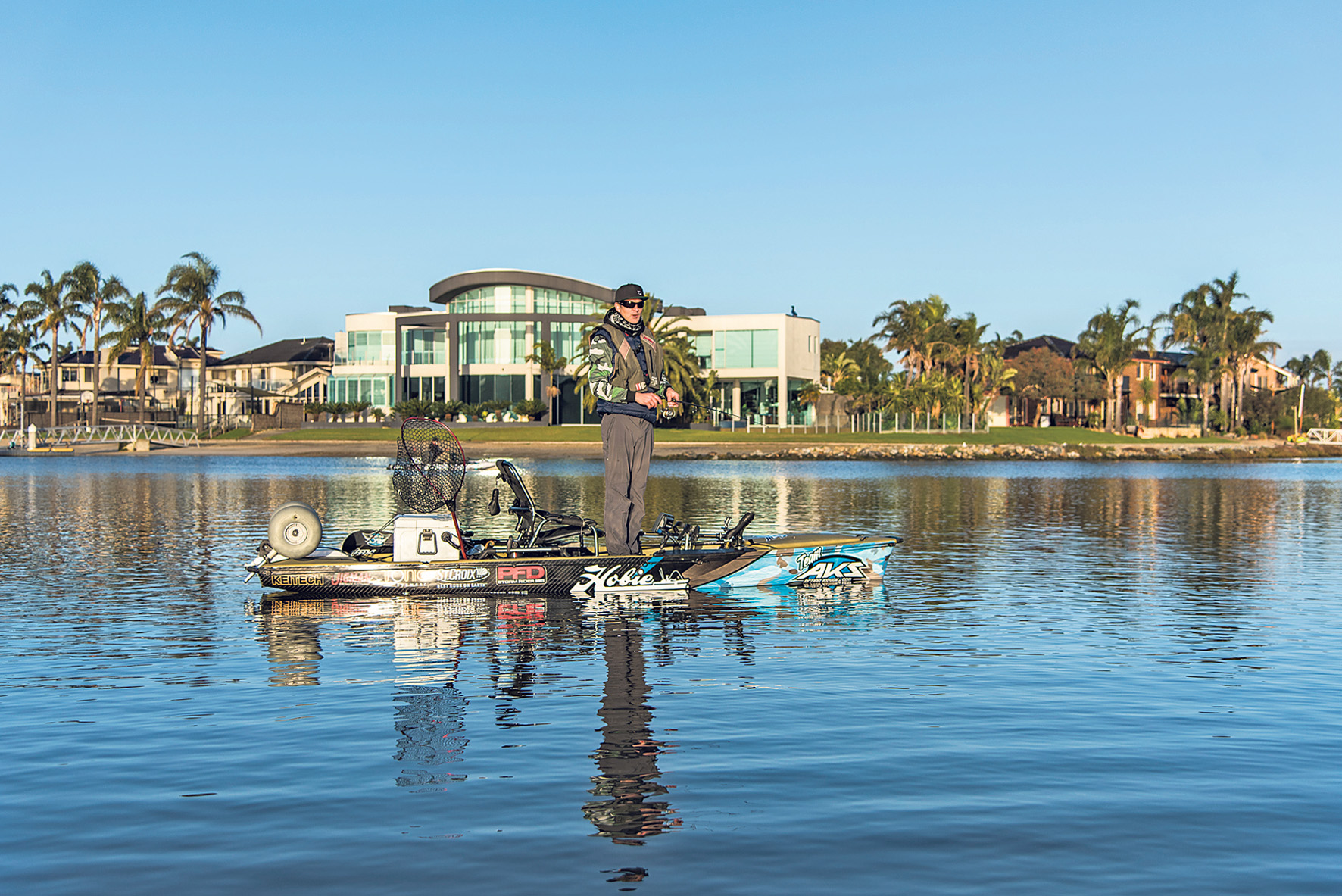 Paddling the Patterson Lakes canals feels like holidaying on the Gold Coast. 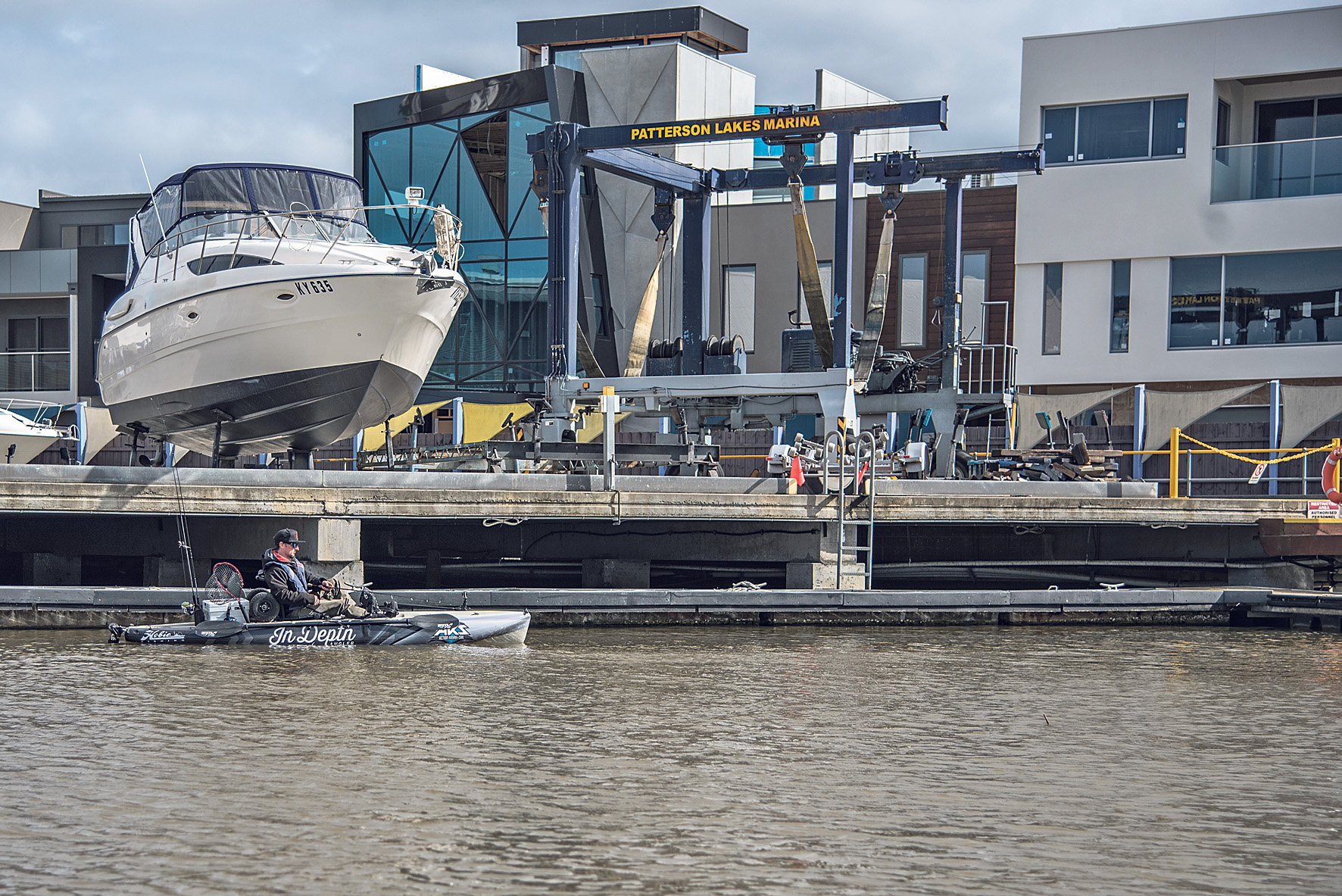 This area is cram-packed with fish holding structure. 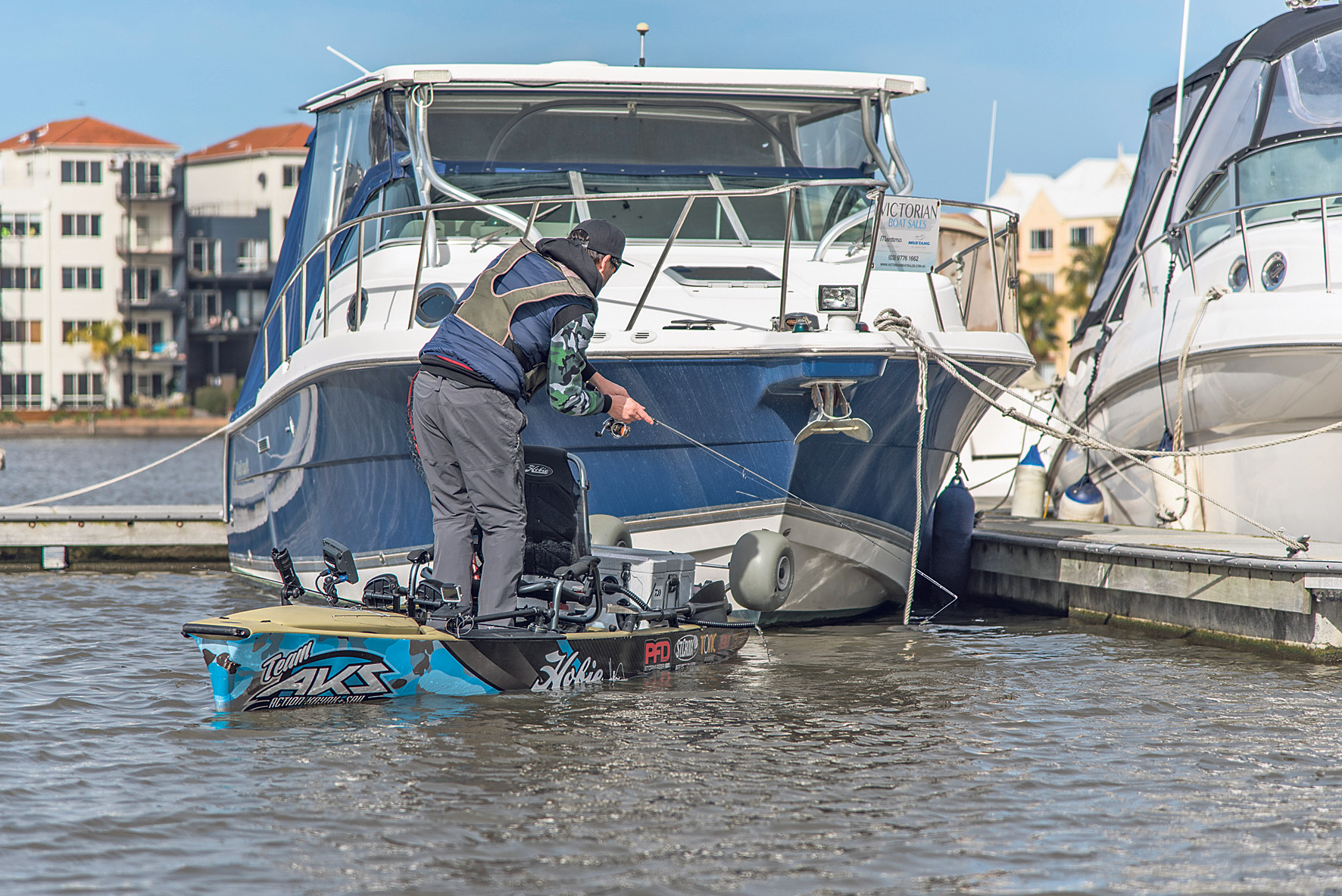 The relatively small size and superior manoeuvrability of a kayak helps anglers position their yaks, for a cast to be successfully fired into that perfect gap. 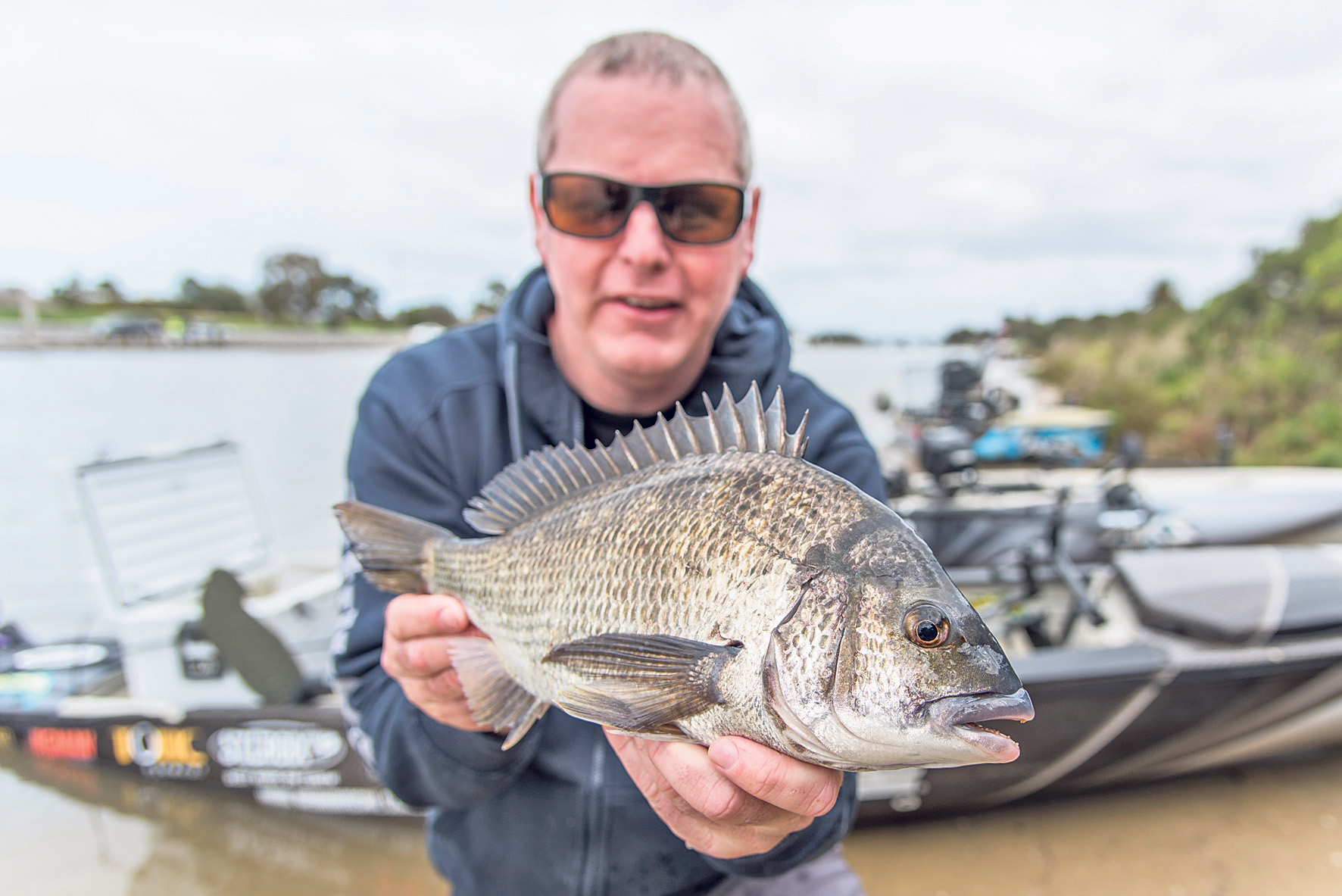 A crab imitation thrown up tight against a concrete wall accounted for this healthy specimen, caught by the author.

The key to success fishing these techniques is an accurate cast. Keeping your presentation as close as possible to where the bream are feeding is critical. For this reason, kayaks come into their own in this type of structure laden water. Kayak anglers can approach a likely looking pontoon or boat hull in silence, meaning they get considerably closer before spooking fish. The size and superior manoeuvrability allows anglers to position their yaks at that perfect angle, so the cast can be successfully fired into a seemingly impossible small gap between boat hull and pontoon. It’s those casts that regularly result in a hit.

Soft plastics, particularly small curl-tail grubs in the 2-3” range, rigged on a 1/16oz jighead, are very effective and versatile at Patterson Lakes. Like other methods, they can be cast in tight and worked close to structure, or used to target schooled up pre-spawn bream sitting in deep, open water during cooler months. Metal blades are effective when the fish have moved away from the structure and schooled up. Cast these over a school and work back using a lift and pause retrieve – this can be a killer technique.

There are also extensive mud and sand flats at Patto Lakes. Grubs cast towards the bank and worked down the flat using a hop, hop, pause retrieve can produce a strike. Diving hardbody lures are useful when fishing the flats. Long casts, with a slow twitch and pause retrieve in contact with the bottom, will account for perch, mulloway and bream.

Safety Gear
Remember to wear a PFD and carry a bailer on your kayak, as required by Victoria law. The Patterson Lakes ramp can be very busy, so take measures to ensure you’re highly visible for boat traffic. During large tides, strong currents exist, particularly when paddling through the narrow floodgates at the entrance to the canals.

Conclusion
In recent years, the popularity of fishing from a kayak has grown. With the lake’s close proximity to Victoria’s capital, it’s the perfect place for kayak anglers living in the city to get their fishing fix. Kayaks are the perfect craft for taking on the vast array of structure featured throughout the Patterson Lakes system – it’s one place I never tire of fishing.

Hotspot: That’s why they call it ‘Red’cliffe

by Reece Thomas • If you are a kayak fisher that has ever dreamt about catching big snapper in shallow water in Queensland, then you may have ventured to Redcliffe, or put this location on […]

by Olivia McKenna • Lake Lenthalls is situated 30km northwest of Maryborough, along the Bruce highway. This Lake is one of the most pristine bodies of water available along the Bass to Barra trail. Primarily […]

by Rupe • Hinze Dam is by no means a secret location. It has a long and decorated history of being known as a fantastic fishery, full of Aussie natives that are, on most occasions, […]