Hopefully you managed to get the kayak on the water over the holiday break and find a fish or two. There were no extreme fishing trips for me over the break. I got the yak in the water to introduce some newbies to the sport, and to spend some time paddling with friends that wouldn’t consider themselves hardcore anglers. These trips reinforced to me that our sport is so much more than just fishing. It’s the adventure, the mateship, interaction with nature, scenery, the serenity. Then on top of all of this, there’s still the fishing.

I’d like to share a couple of these adventures and then break down a few aspects that made these missions successful. There’s also a few things you can keep in mind when paddling and fishing with kids, newbies or softcore anglers. With more people getting into the sport and plenty more kayaks sold this Christmas, we have the opportunity to assist these new paddlers and ensure they have a comfortable, safe and productive introduction to the sport we love.

Ruby’s Morning Adventure
My first adventure was with Miss Ruby, a nine-year-old who has been doing a bit of land-based bait fishing with dad, but never paddled a kayak. Our plan was to paddle about a kilometre, mostly in the shallows, then pull our kayaks up onto a sandbank where we would fish for Ruby’s first flathead.

Ruby is a pretty adventurous young lady and took most things in her stride. Anything she was unsure of we worked at slowly and systematically. After wheeling her kayak to the water, it was PFDs on and then we played around in the shallows for fifteen minutes or so, as Ruby learned how to propel the kayak. We turned left, right, paddled backward and managed to avoid crashing into the mangroves before we pushed out a little deeper and allowed the current to guide us in our direction of travel.

Along the way we spotted jellyfish, stingrays, birds and I ensured that Ruby was comfortable and tracking okay. As her confidence in her paddling and stability grew, we took more time to enjoy the sights and chat. We then talked about leaning back in the kayak, paddling a little faster and sliding the kayak up onto the beach, so that it was easier to jump out. Then it was into the fishing.

We had a few casts with my go-to plastic and then I suggested changing to my wife’s favourite, which worked, of course. I was casting, Ruby was retrieving and hopping the plastic, and then screaming as a flathead grabbed her lure and sped off across the shallows. I reassured her that all was good, to take her time. After a couple of minutes, we had a flathead in the net. It was her first flathead and she chose to keep it for her and her dad to have for dinner.

A dozen casts later and it was fish on again. This fish ate the soft plastic as Ruby was lifting it. The strike was brutal, followed by a first run that took some drag and saw a big smile on Ruby’s face as she fought it more confidently. Around 42cm, this one was destined to become fillets for Ruby’s grandparents, who had looked after her over the holidays.

The tide turned to run-out and we made the call to paddle the short distance back to our prearranged pick up point. The wind picked up as predicted and was blowing against us. Ruby had plenty of stories to tell, we had both had a great time, created some great memories and as Trace Adkins sings, ‘she thinks we’re just fishing.’ 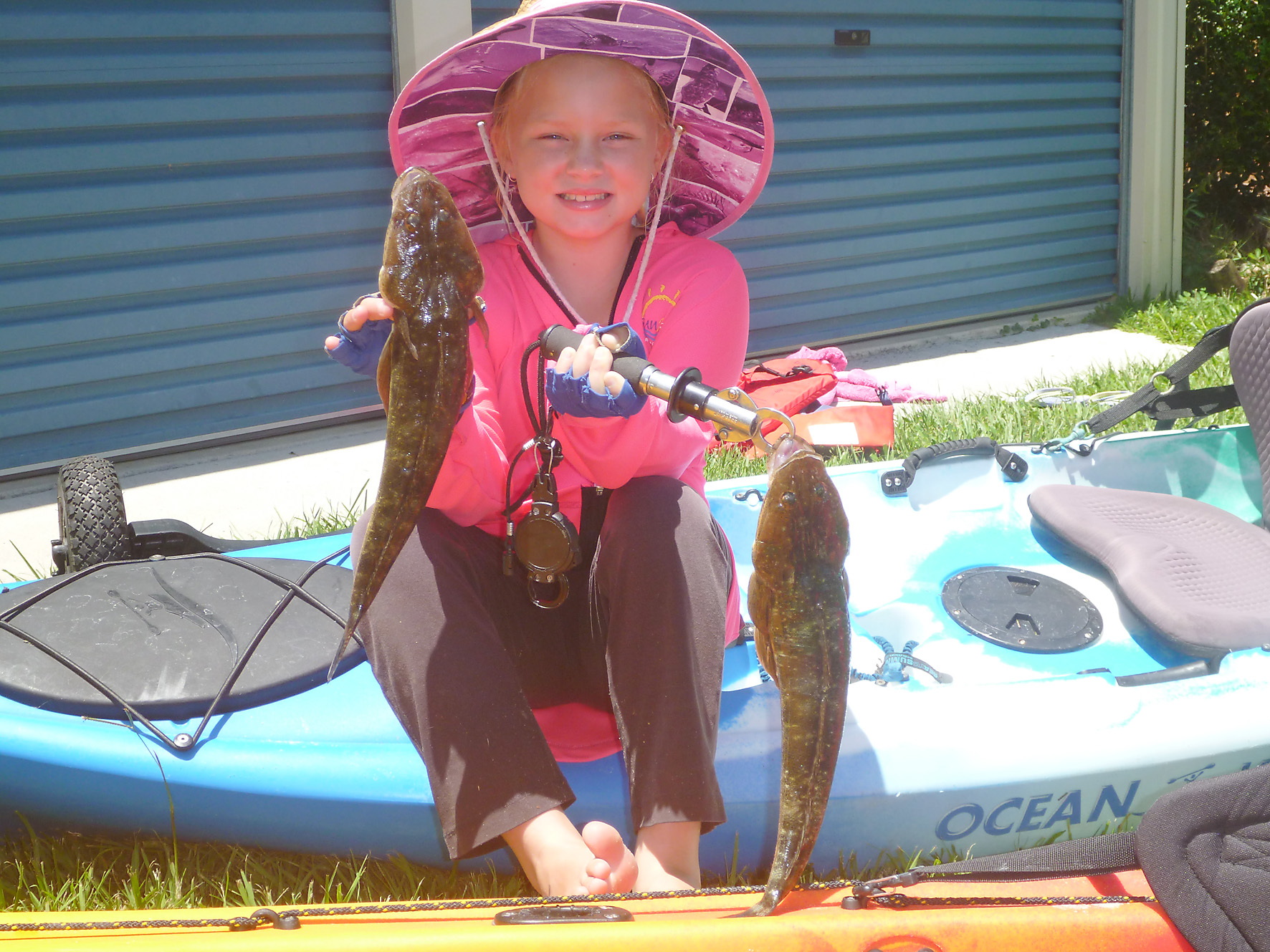 Ruby had a great morning out and a caught couple flatties for a feed. 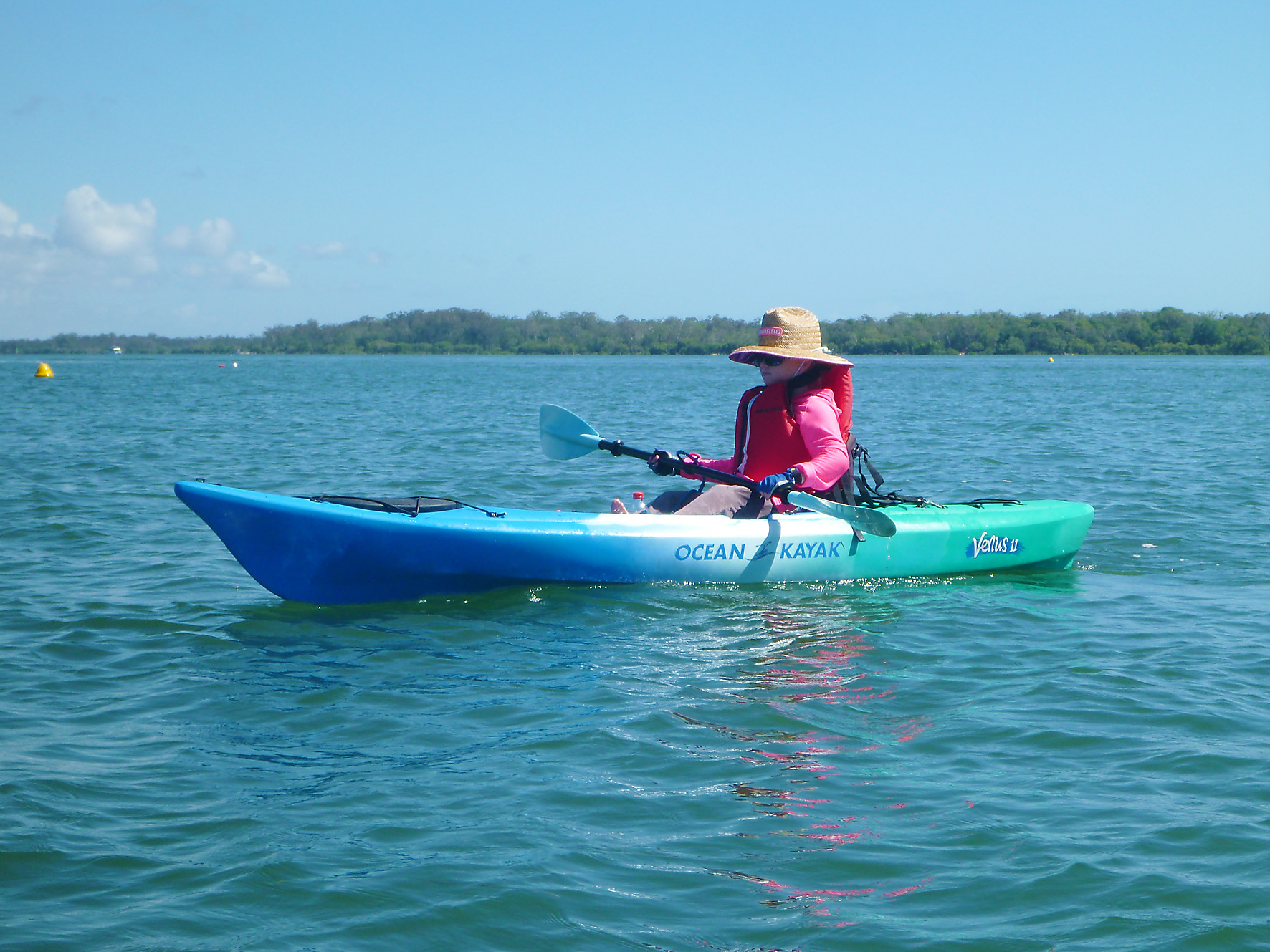 Ruby looking cool while she learns the basics. Note that she has her water bottle and PFD. 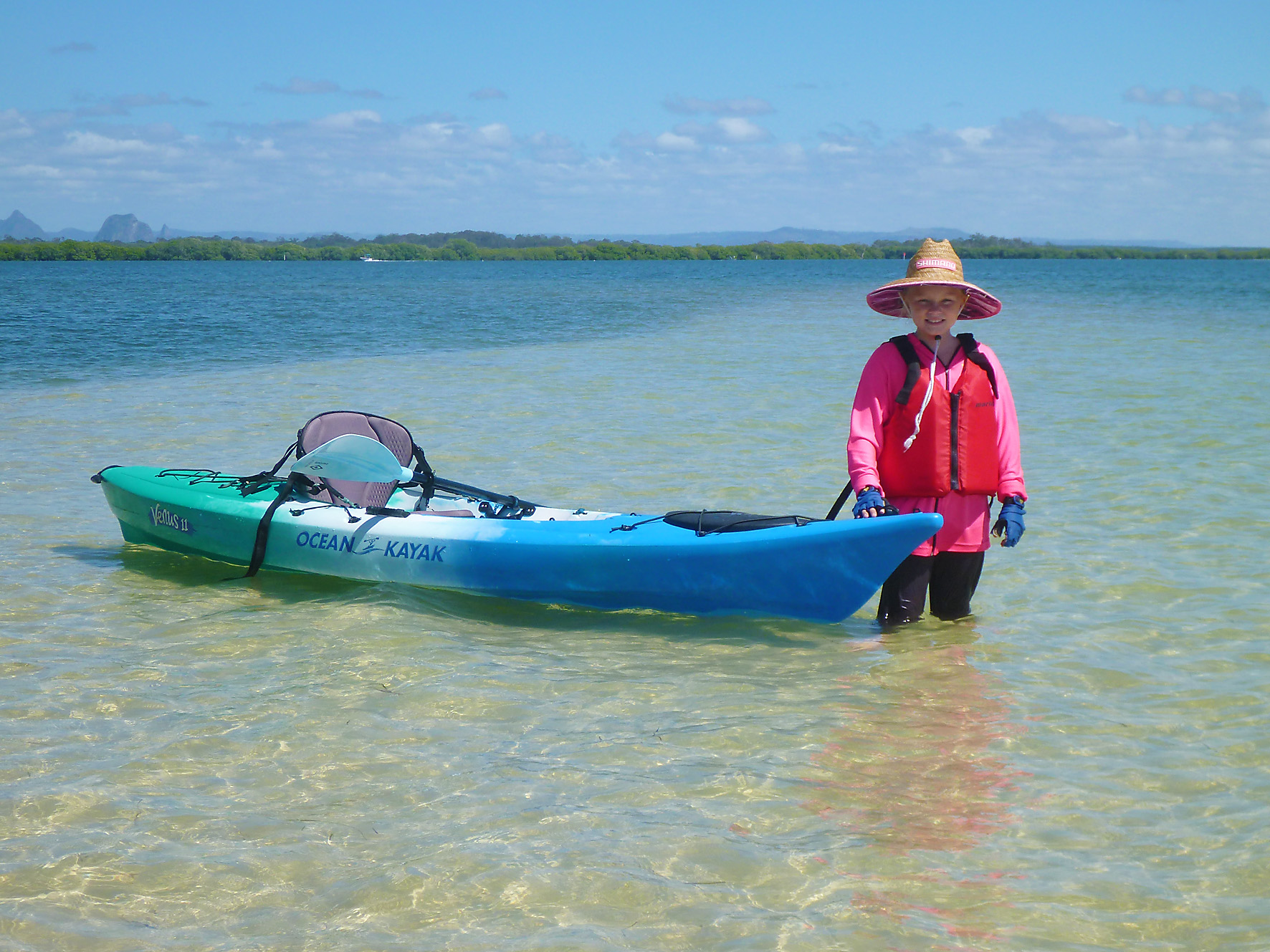 This looks like a good spot for a fish and swim. 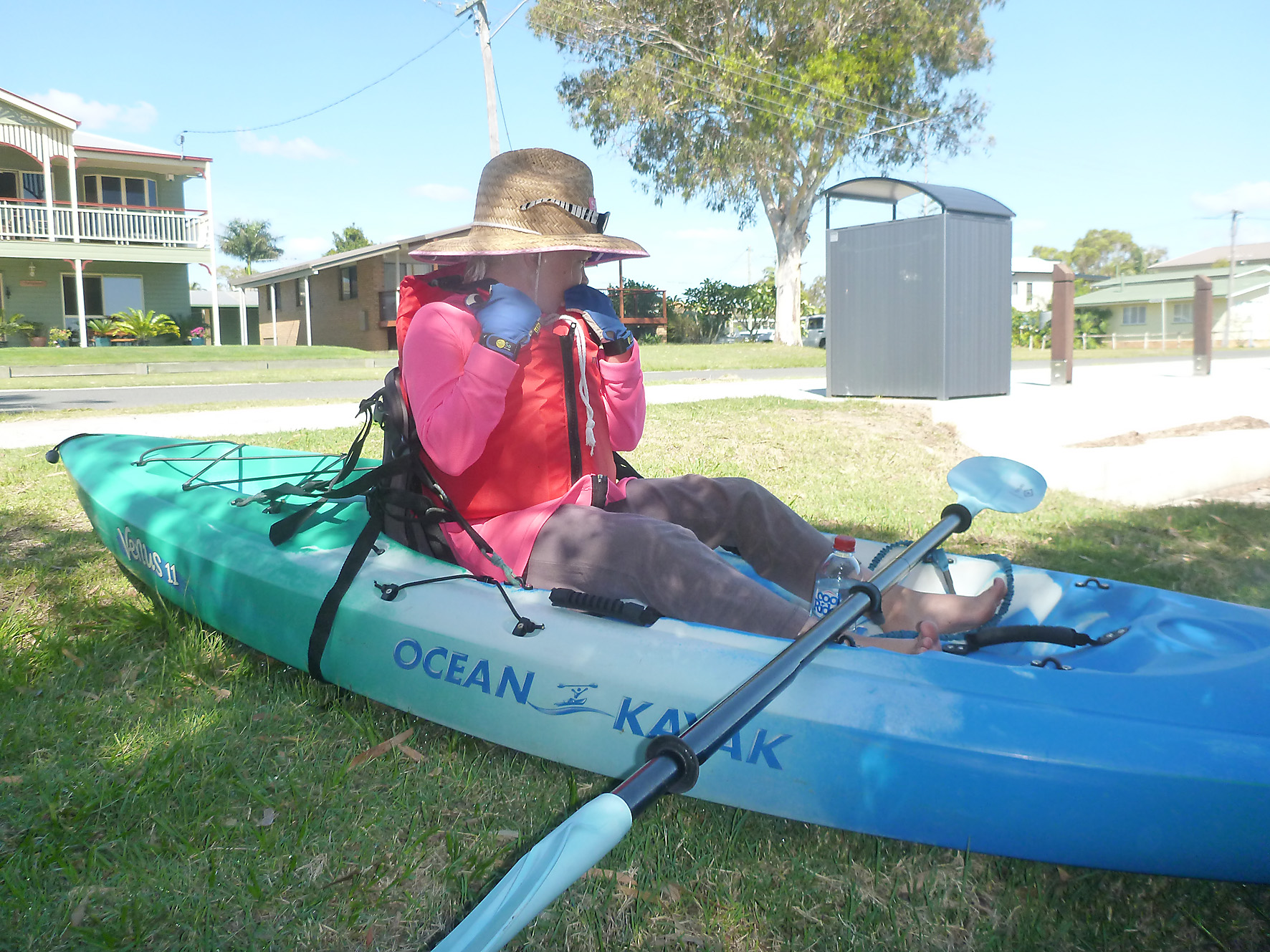 Make sure the seat is adjusted correctly before sliding the kayak in the water. 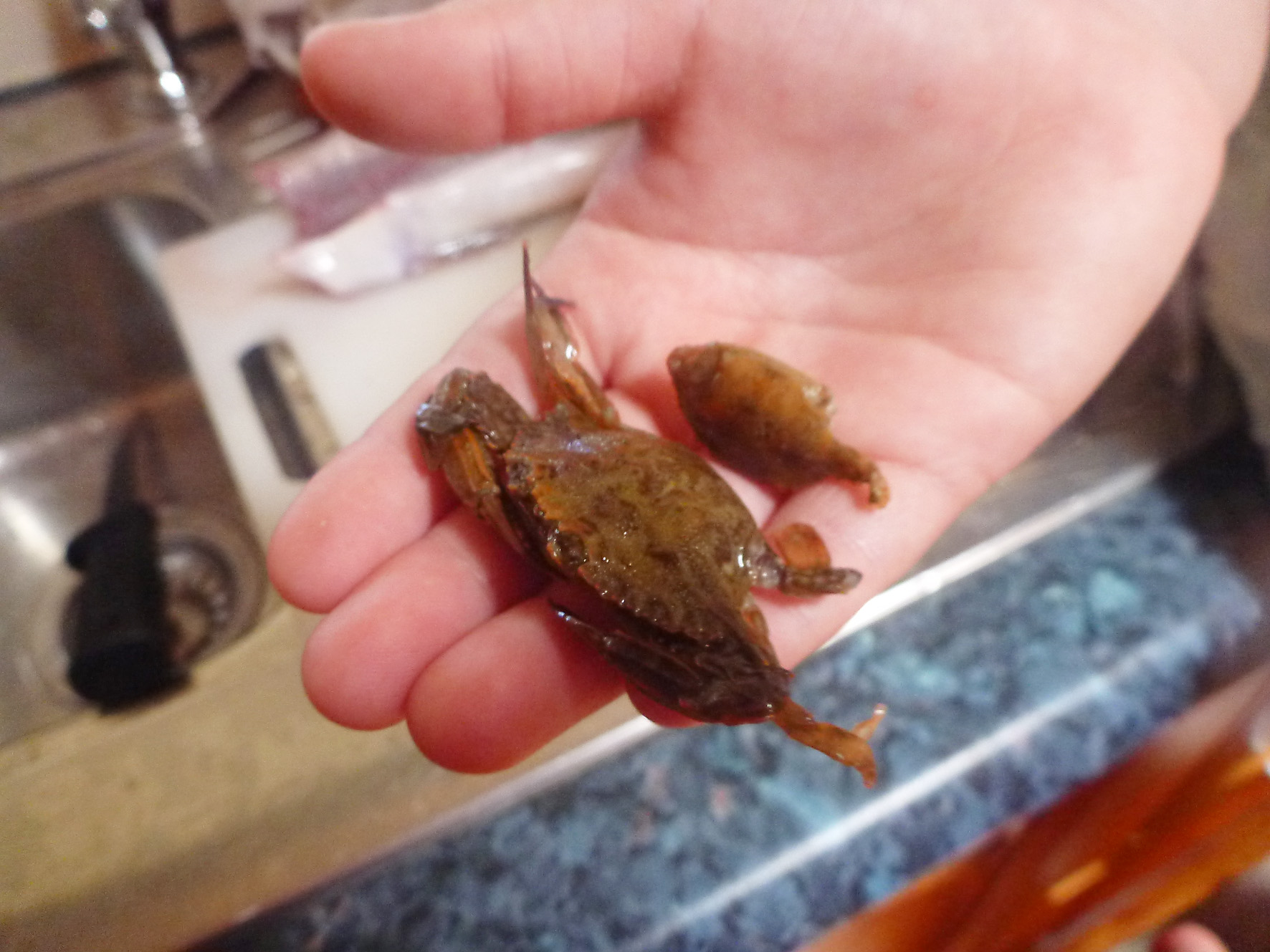 Ruby was interested in what her flathead had been eating, so she investigated while filleting. 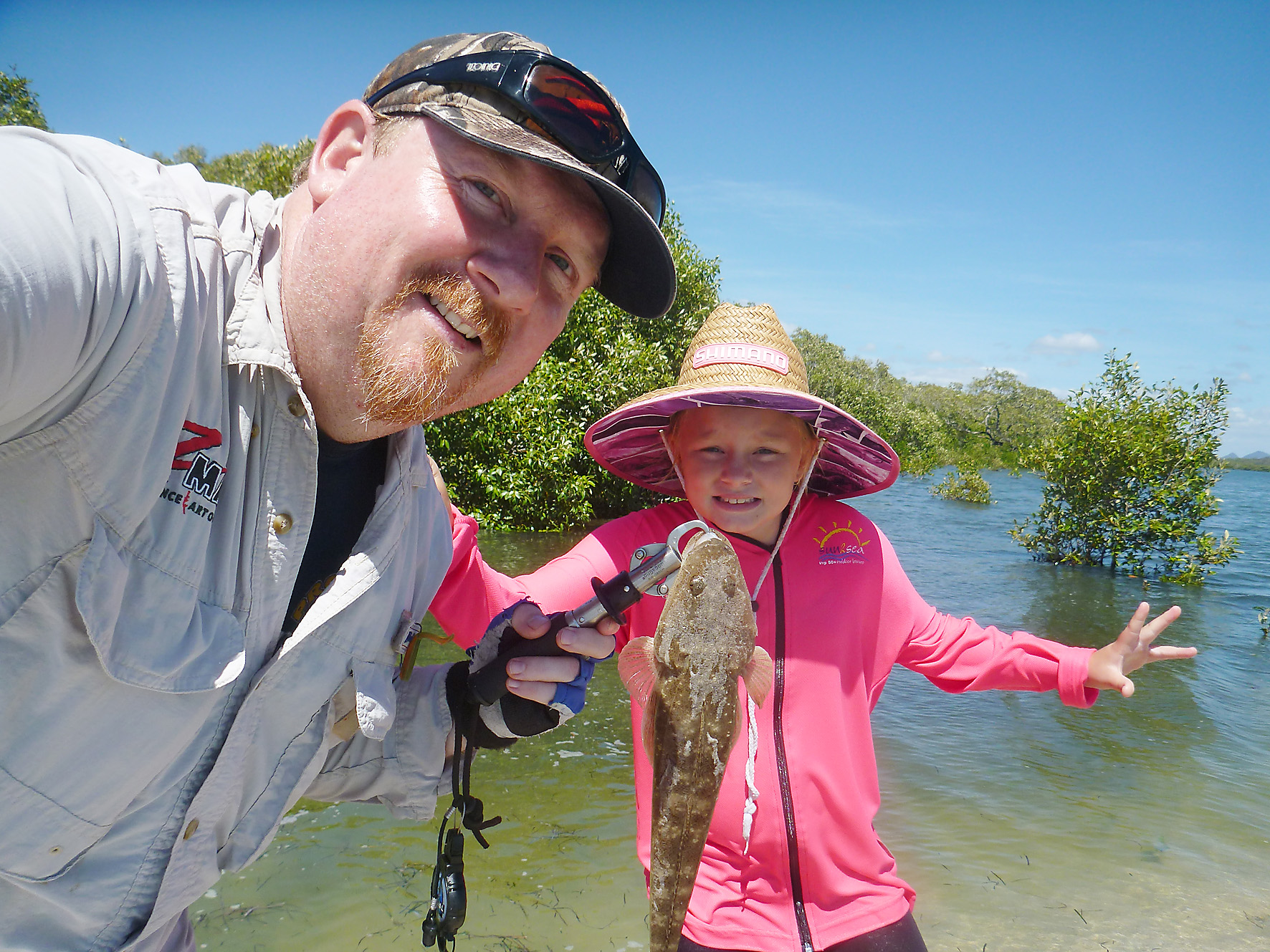 Island Lunch
My wife Sheri planned the second adventure. It was to be a few kilometres of paddling across the Pumicestone Passage for lunch and a swim on the inside of Bribie Island, north of Brisbane. Joining us were our friends Aimee and Toby, who wouldn’t consider themselves hardcore, but they definitely enjoy wetting a line. We had a great day on the water and you can probably think of a spot in your home waters where you can paddle a few kilometres, escape the crowds and enjoy lunch, a swim and a fish.

We set off and caught the tide, travelling as a group to ensure that we were more visible to boat traffic and stopping at one flat for a quick flick on the way. I managed one flathead that was kept to fillet up for the guys to take home. Then we decided to head for our destination, as the forecast was for strong afternoon winds that would be pushing us home.

We pulled the kayaks up on the sand, under the shade of a tree, enjoyed our bread rolls and fruit salad, and then had a swim and a flick while standing waist deep in water. It was relaxing, fishing and chatting with a magnificent backdrop of the Glasshouse Mountains. It’s definitely not all about the fishing.

We had a few bites on the soft plastics, almost landed a longtom, fed some of our bread roll to whiting, gar and herring that were swimming around our feet, and spotted a small squid that was netted for closer inspection before being released again. It was a great catch-up and as a bonus, we planned a future lightweight kayak camping adventure further up the Pumicestone Passage.

With the wind forecast to blow up with the turn of the tide, we opted to head for home. As the tide began to run out, the wind kicked up and pushed us in the right direction. It was a good call to leave before the winds became strong, as it became quite rough while we were packing gear and loading kayaks. It had been a great day kayaking, swimming, adventuring and fishing, even without catching loads of fish.

Here’s a few reasons why these missions were successful and a few things to keep in mind when paddling and fishing with kids, newbies and beginner anglers.

Tides Wind and Weather
The tide can be your friend. Use the tides to move you to and from your fishing, swimming or camping destination. If anything goes wrong with you or your gear, it’s much easier to journey home with the tide. Keep an eye on websites like Seabreeze and Willy Weather. The last thing you need is to be paddling or fishing with a beginner in poor weather, or battling strong winds, especially on a long paddle home. On both of these adventures, we planned to make the most of the morning weather, used the forecast winds to carry us home and were off the water before the wind reached 20 knots.

Fishing
We all say ‘a fish is a bonus’ or ‘it’s not all about the fishing.’If you carry this attitude into these adventures, you’re likely to enjoy them more. In fact, if the session does produce a fish, it can actually be more enjoyable than a hardcore fishing session where catching is the primary objective.

I prefer not to fish most of the time when guiding kids and newbies. Instead I ensure they’re geared up correctly, casting in the right spots and working the lure effectively. I talk them through all of the little things that we take for granted when fishing. At the end of the day, this will help make them a better angler that we can share future adventures with. 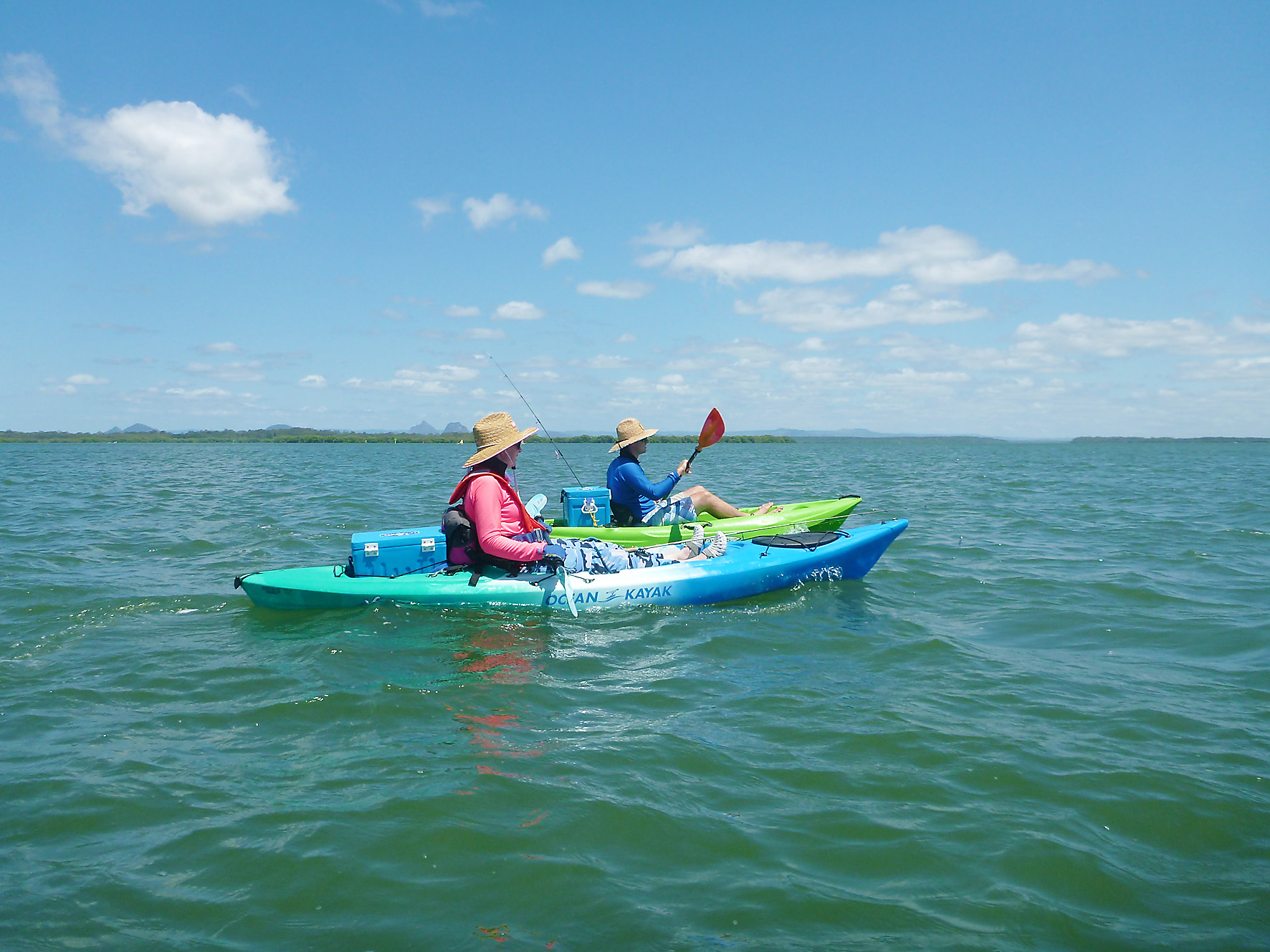 Sheri and Toby headed for their island destination. 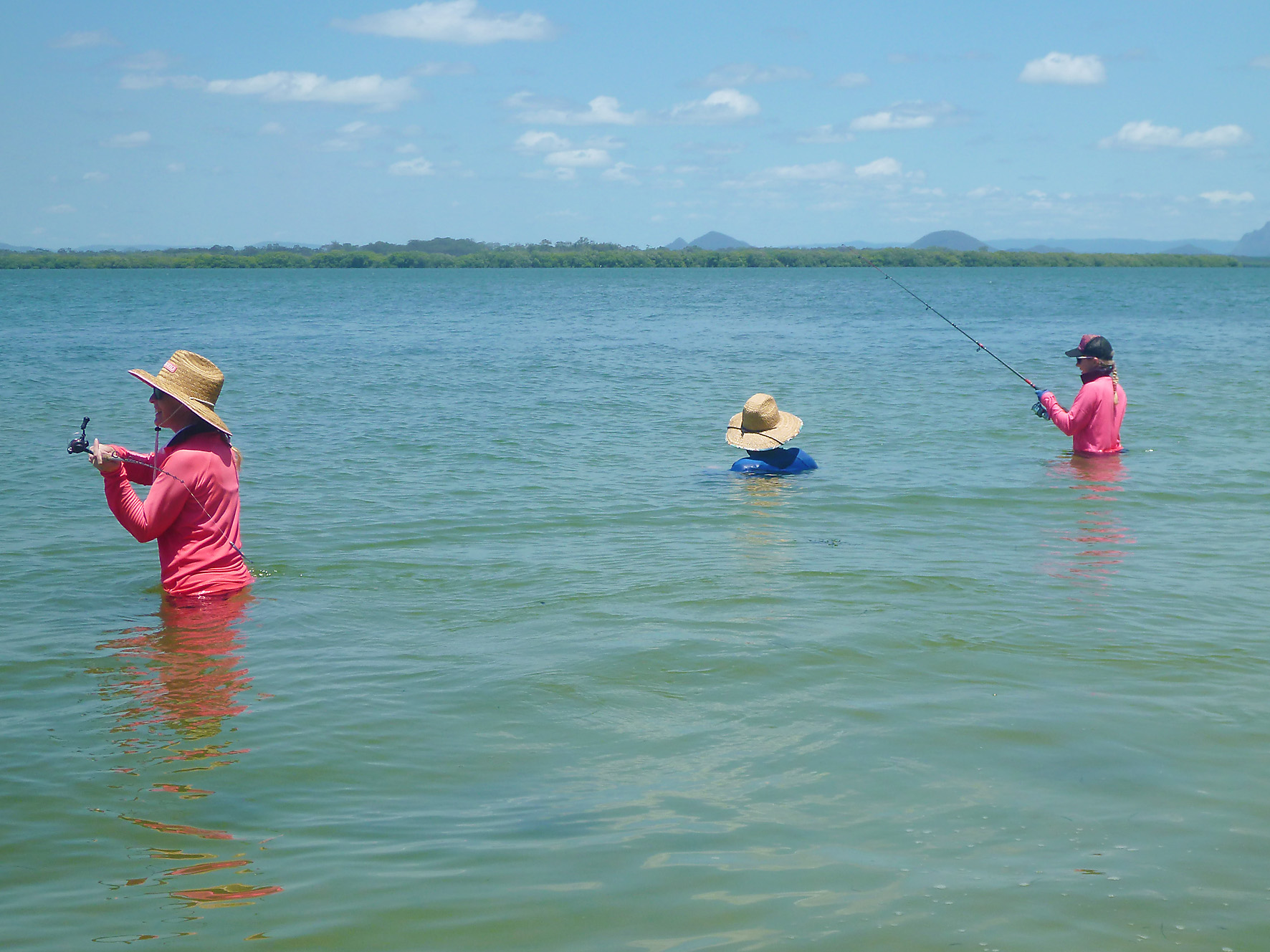 A relaxing way to wet a line on a hot day. 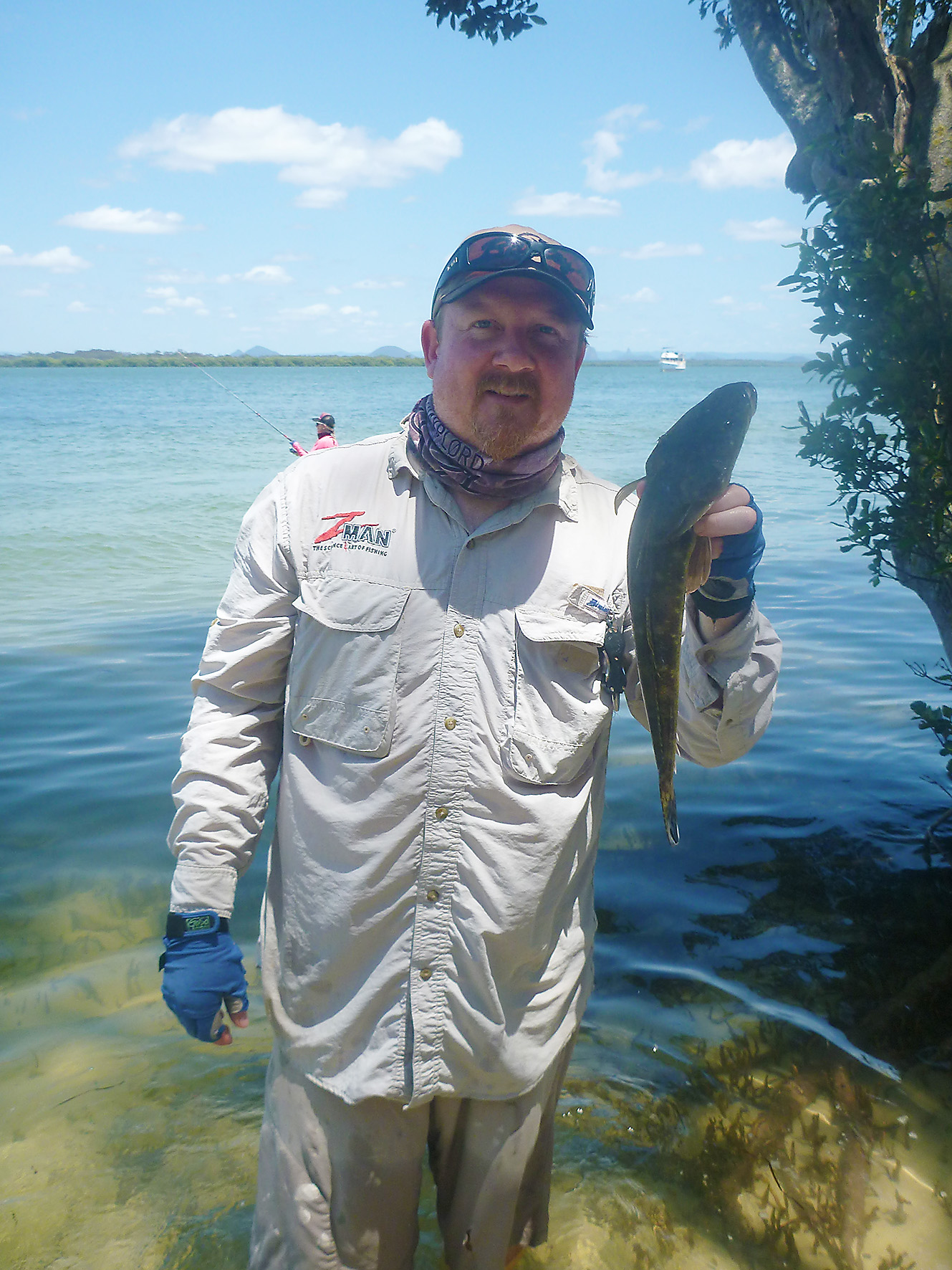 A nice flattie for the table – just add chips! 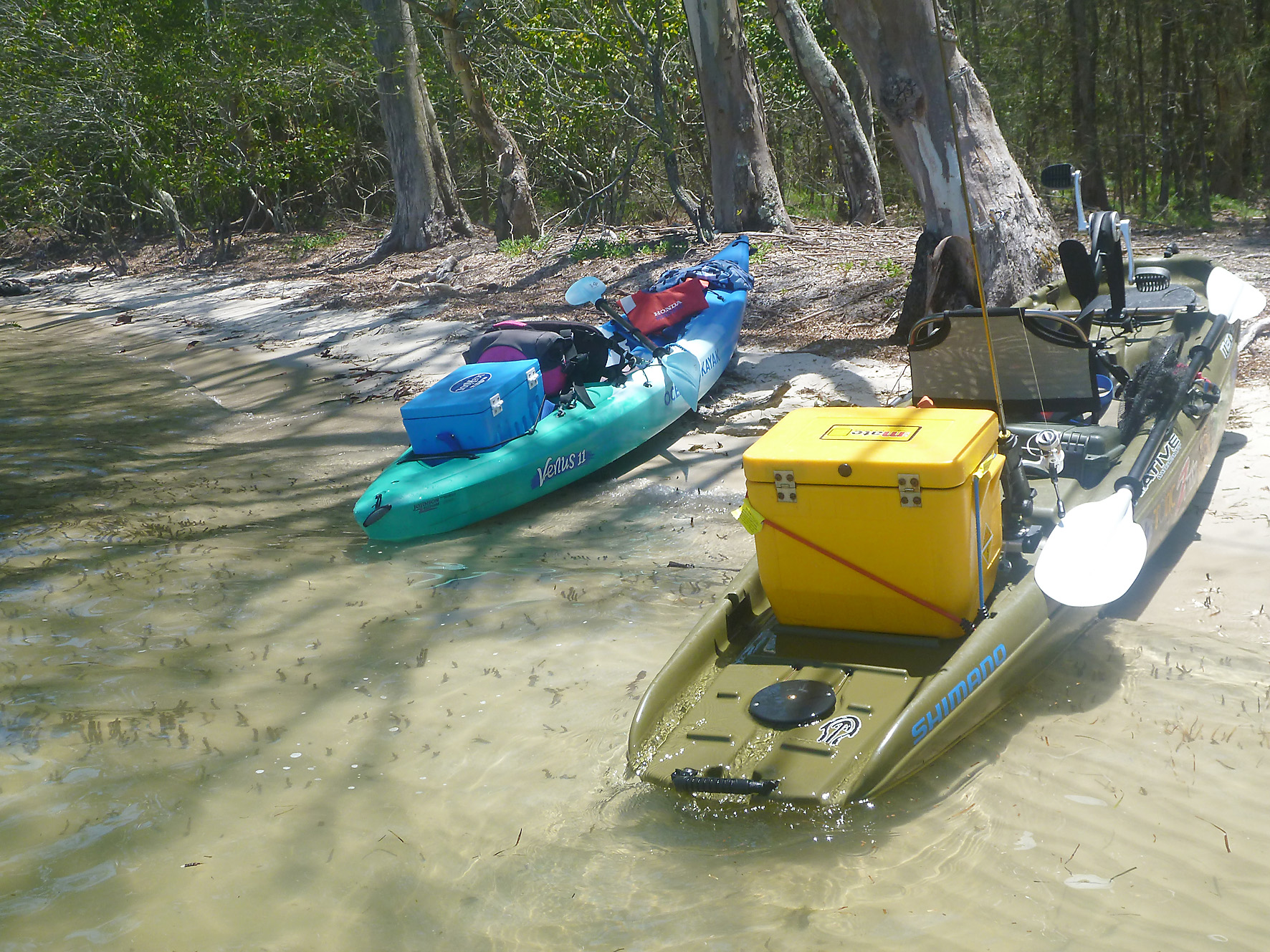 This is a nice shady point to stop and have lunch. 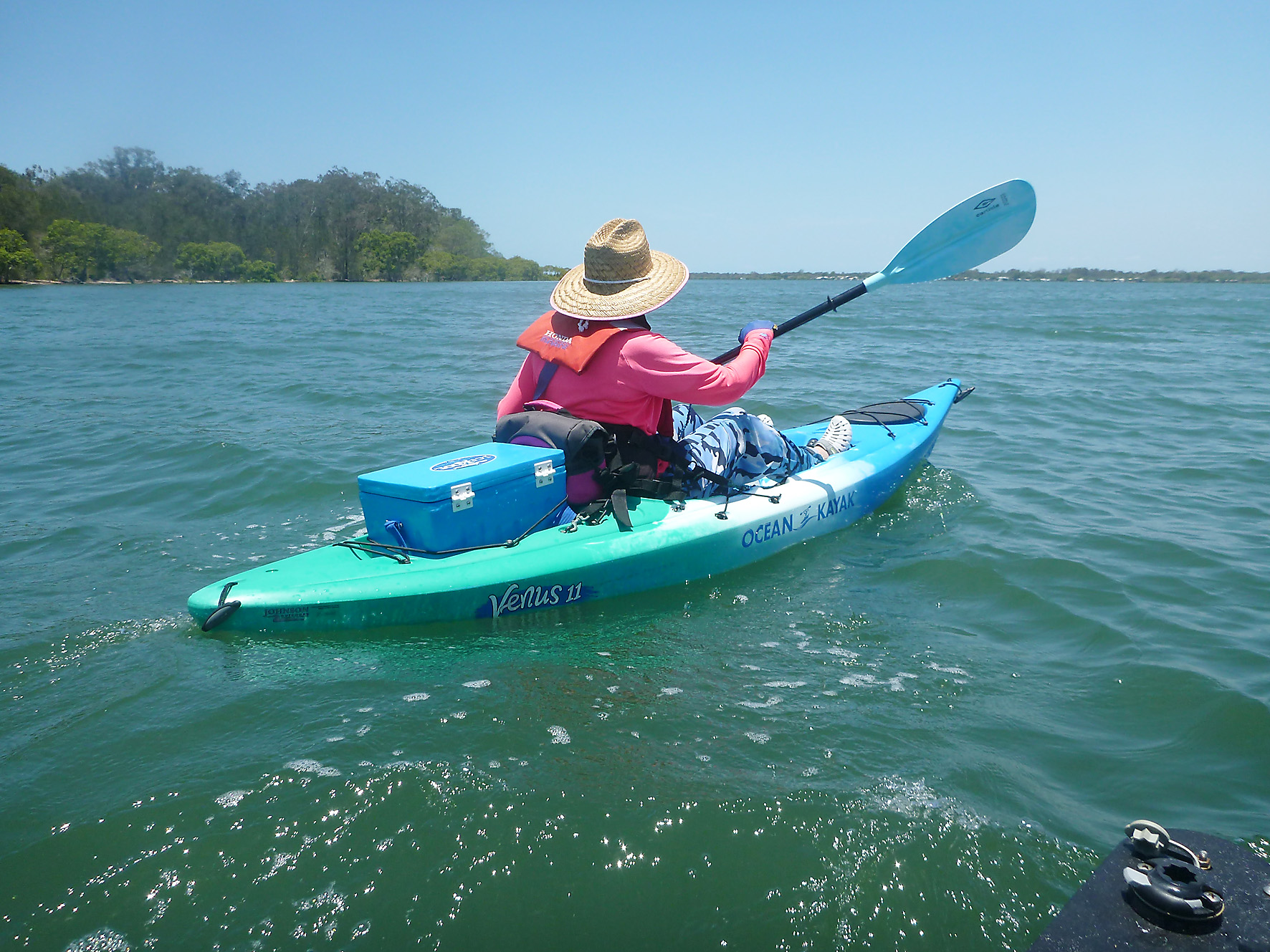 Headed home with the wind behind you and helping you out is a relaxing end to your journey. 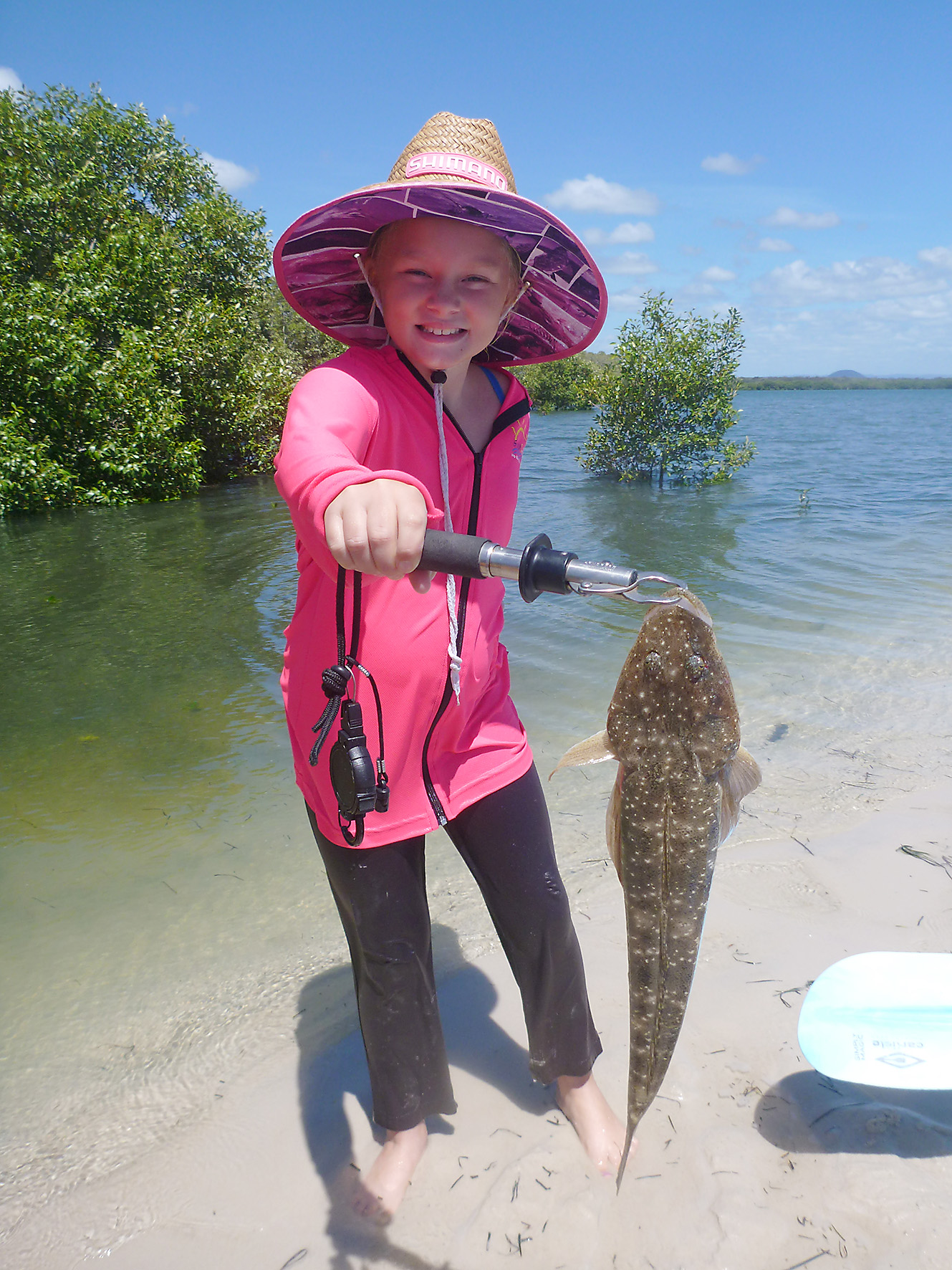 Ruby’s second flathead. She was confident enough to hold this one. 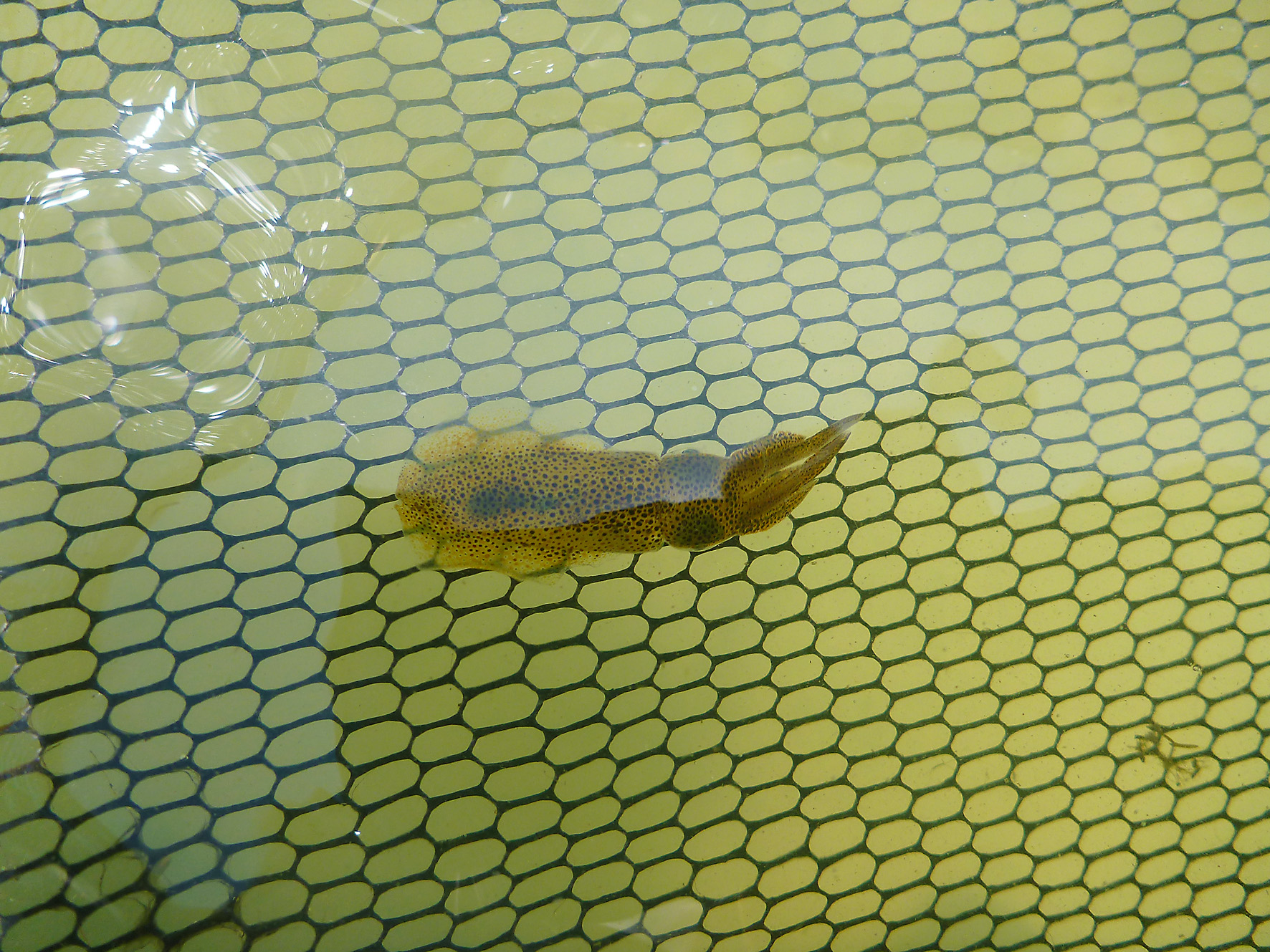 Just one of the many creatures you can see on a kayak fun fishing trip.

Kayak or Land-Based
Just because you’re adventuring in the kayak doesn’t mean you have to fish from the kayak. If you have someone that is new to fishing or new to kayaking, make the most of the paddle and then select a suitable land-based location for fishing. This makes it much easier for you to assist them with it, without having to battle the wind and tide. You can easily focus on one thing at a time and keep things simple.

PFD and Gear
Make sure they’re wearing a foam-filled PFD and explain that if they tip the kayak, just float around. You can even have a swim with the kayak and PFD in the shallows and climb in and out of the kayaks a few times before your adventure. I carry the icebox, net, lip grips, fishing rods and other gear on my kayak, allowing them to paddle more freely and be less concerned about losing gear while their confidence grows.

It’s a good idea to talk about clothing when planning your adventure. Your paddle buddy should be dressed for the adventure, location, weather and sun.

Make sure you carry plenty of cool drinks and food to avoid hunger, thirst and that angry little monster that can come out of any of us when confronted with a lack of either. A handful of lollies stashed in a ziplock bag (remember any special dietary requirements) has been the key to reigniting the enthusiasm, renewing the focus and subduing the monster on many adventures.

Know Your Limits
It’s a good idea to spend some time in the shallows like Ruby and I did, learning to control and manoeuvre the kayak and gain some confidence. This also allows you to quickly assess their abilities so that you can alter your adventure as required.

Well, that’s a quick look at a few things that have helped make my experiences with kids and beginners more successful. It can be extremely rewarding to see a beginner flourish into a capable paddler, a new angler catch the first of a species and also to share these adventures and experiences with others. Be a good guide, be prepared, be patient and who knows – you could be embarking on a journey with your future paddling and fishing buddy, sharing adventures and making memories.

See you on the water.

by Toby Grundy • I’d always wanted to fish Glenbawn Dam. There is just something about a big bass dam that has always excited me, even way back when I was a young fisho living […]

by Justin Willmer • Anglers often keep a handful of locations that inspire them and draw them back, fuel their daydreaming, recharge their soul and sooth their itchy casting finger. Whether it’s just the amazing […]

by Peter Jung • It is always an interesting concept when you contact a marine dealership to organise some boat tests and the reply is “We have a boat for you to test, but we […]