Everyone hates the dreaded cold. Children’s sport begins and finding time to get out on the water becomes a challenging task, let alone getting a break in the weather when you can actually get out and catch something.

Even then, when you do get the opportunity to find something to sink the hooks into, it can be very time-consuming locating fish and often results in going home empty-handed.

Unlike summer, winter fishing can be quite a challenge. First you have to battle the bitter cold and then head out searching for a species that may not always be in a location you have fished before. However, with a few tips, consistently catching fish in winter can be much easier than you think.

One essential ingredient to being successful in catching fish in winter is the use of berley. Regardless of species, they are all attracted to a fishy smell in the water. You don’t need to go into brewing up a full-blown complicated mixture, as it’s the simplest methods that are the most effective.

Let’s say you’re targeting winter whiting; a berley cage with a few handfuls of pilchards mashed up will do the job or if you’re targeting salmon in the surf, a bag of chicken pellets and tuna oil placed into an onion bag and left to soak in the wash will bring them into your gutter from a mile away is fine.

There is no doubt that berley works. It does also attract a wide range of unwanted species, but without it finding fish will be more of a challenge.

Knowing where to find fish in winter can be frustrating and unlike the summer months where certain species are in plague proportions, finding a reliable location can require a little homework.

While some species can be found year-round in the same location, others won’t be. For instance, when it comes to King George whiting, in the summer months they are everywhere and in winter they tend to be found in small pockets loitering around the entrances to bays and inlets.

Snapper on the other hand tend to hold up on reefs where the bait congregates and depending on the tide and time of day they may move about to other reefs in search of food. Knowing where and when to try a location is vital to being successful throughout the winter months.

Though the summer snapper are all gone, the resident fish are still lurking around. Winter fishing for snapper is a lot of fun if you can bare the cold and there are some sizeable fish to be caught.

Throughout winter, Black Rock is a haven for snapper. Although traditional bait fishing techniques will attract a few fish, you’ll have to sift through the smaller ones to catch something sizeable.

On the other hand, one of the most effective techniques is to flick soft plastics. More often then not, snapper are in hunting mode and love to chase down their meal, which is why soft baits around 3-4” are ideal.

The prime time forcatching quality fish along these reefs is on first light and preferably on the top of the high tide. As the sun rises and the tide abates, the fish begin to move out into deeper water. Black Rock Reef extends into 6m of water and the fish tend to work out to the edge by daybreak. On first light, work on the reef in 4m then move out to the edge just as the sun rises over the buildings, lighting up the water’s surface. 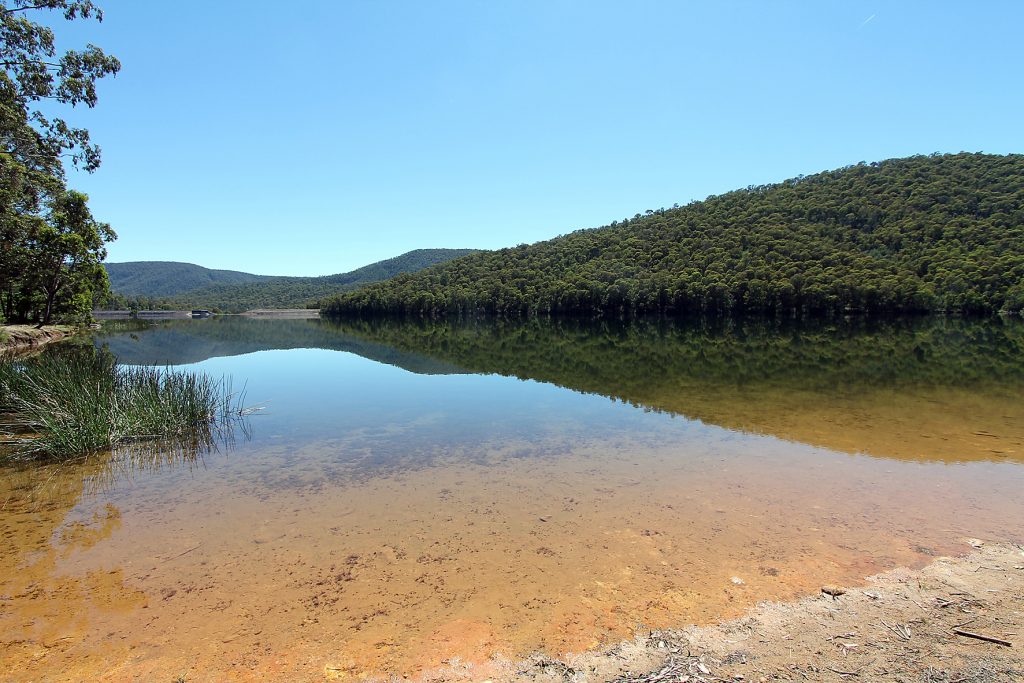 Lake William Hovell is a small lake on the King River about 45 minutes south of Wangaratta and is well worth fishing for trout during winter. 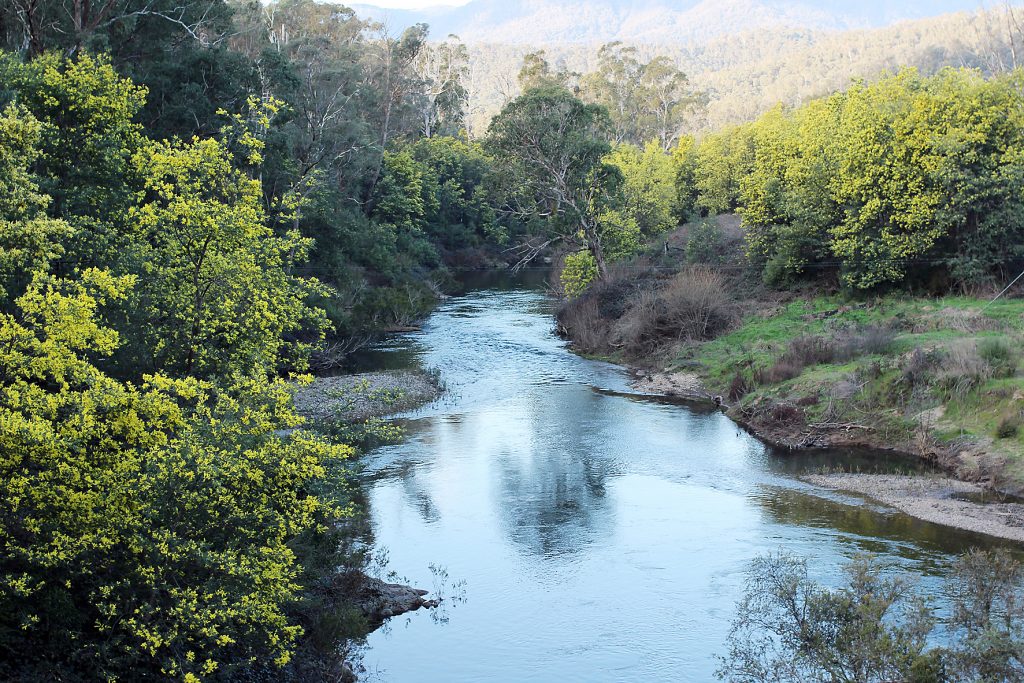 Remember that all streams are closed to trout fishing during winter and don’t reopen until the first Saturday in September. 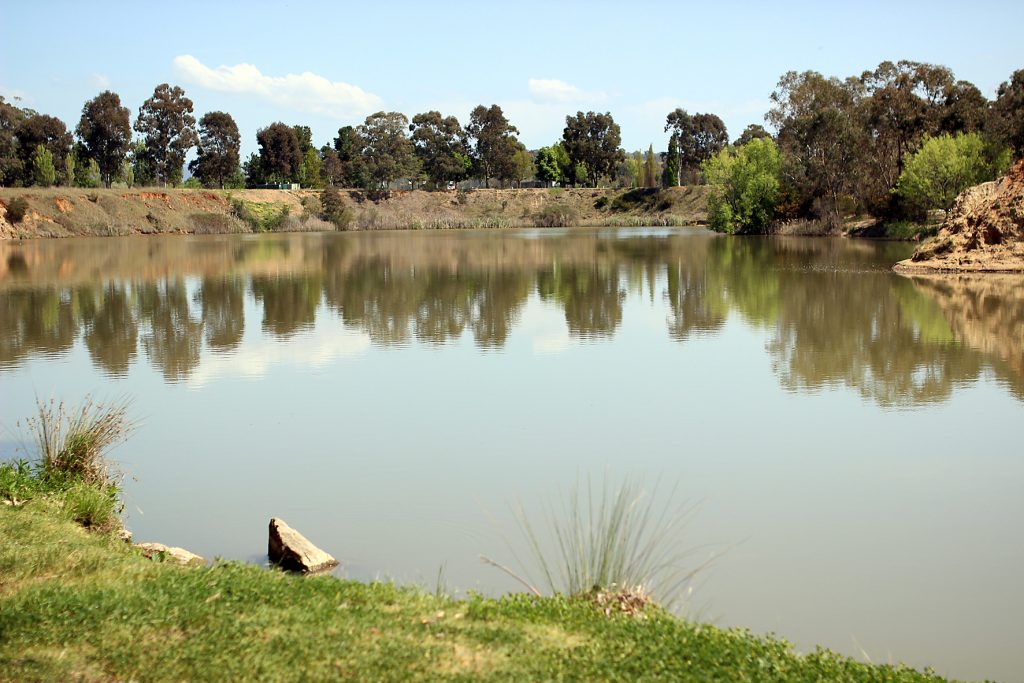 Allans Flat waterhole near Yackandandah gets stocked with 400 rainbow trout each year in the winter school holidays and provides hours of enjoyment for families wanting to go fishing. 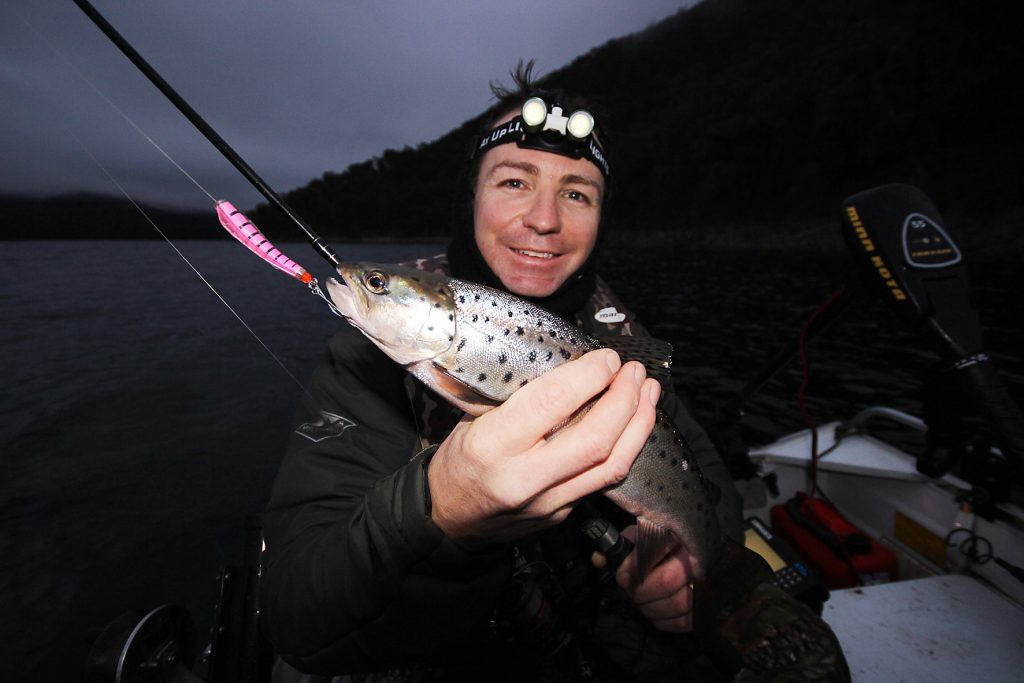 A pre-dawn trout trolled on a winged lure in Lake Dartmouth by Sandy Hector. 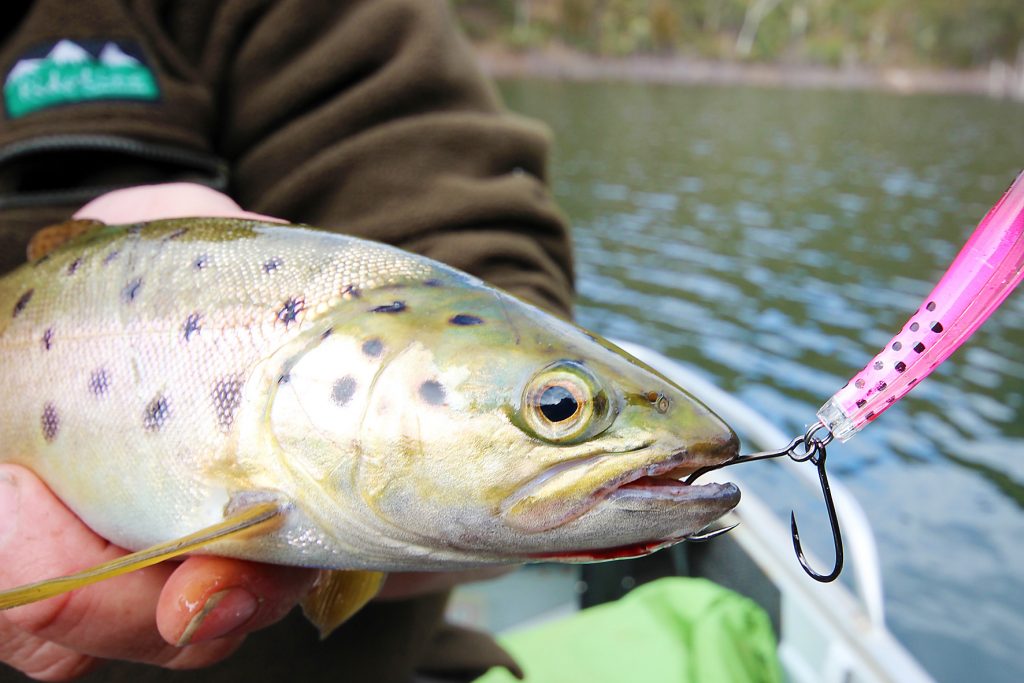 Removing treble hooks from winged lures and replacing them with hooks such as these Siwash hooks can lead to better hook-up rates. 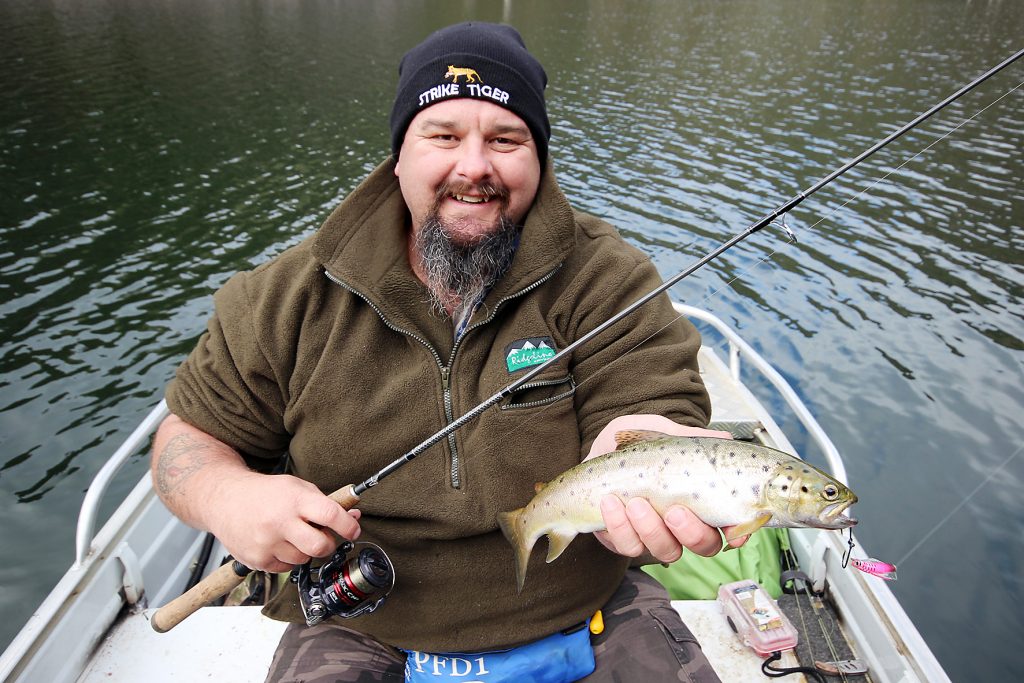 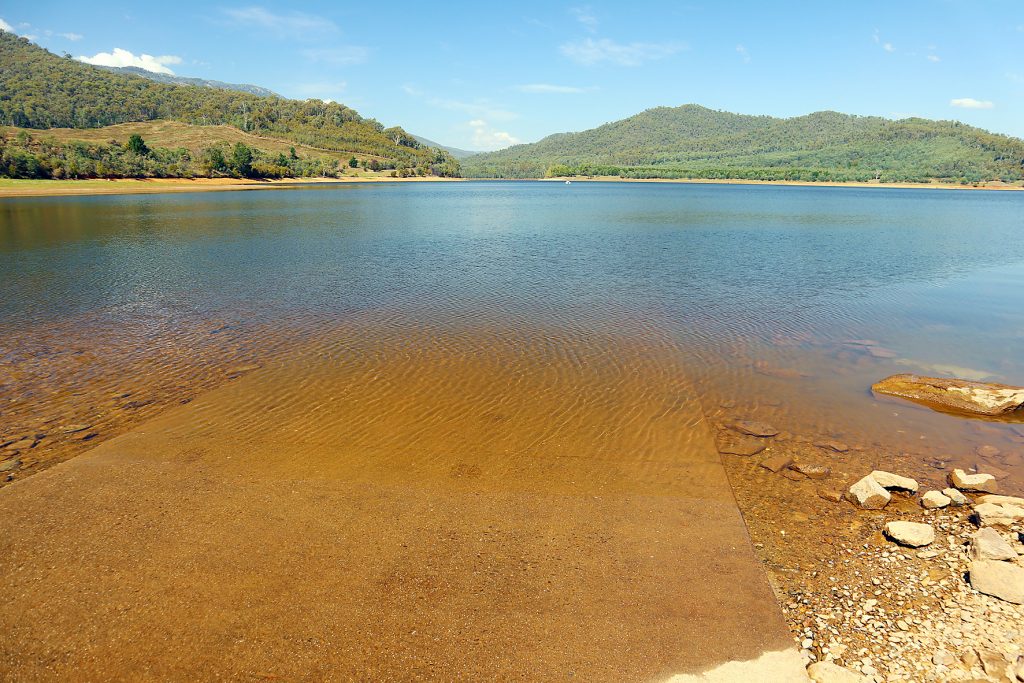 Lake Buffalo can be a tough lake to fish during the winter months but you can have some good success on the redfin there during winter. 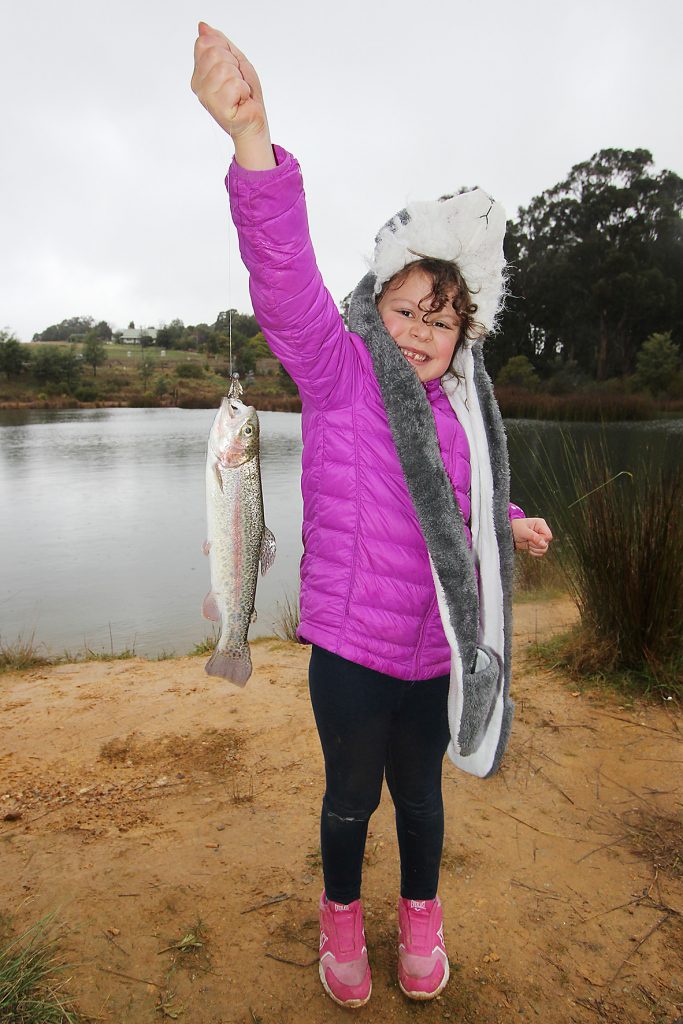 Holly Alexander caught this rainbow trout in Stanley Dam – one of the many stocked family-friendly waterways littered across Victoria. 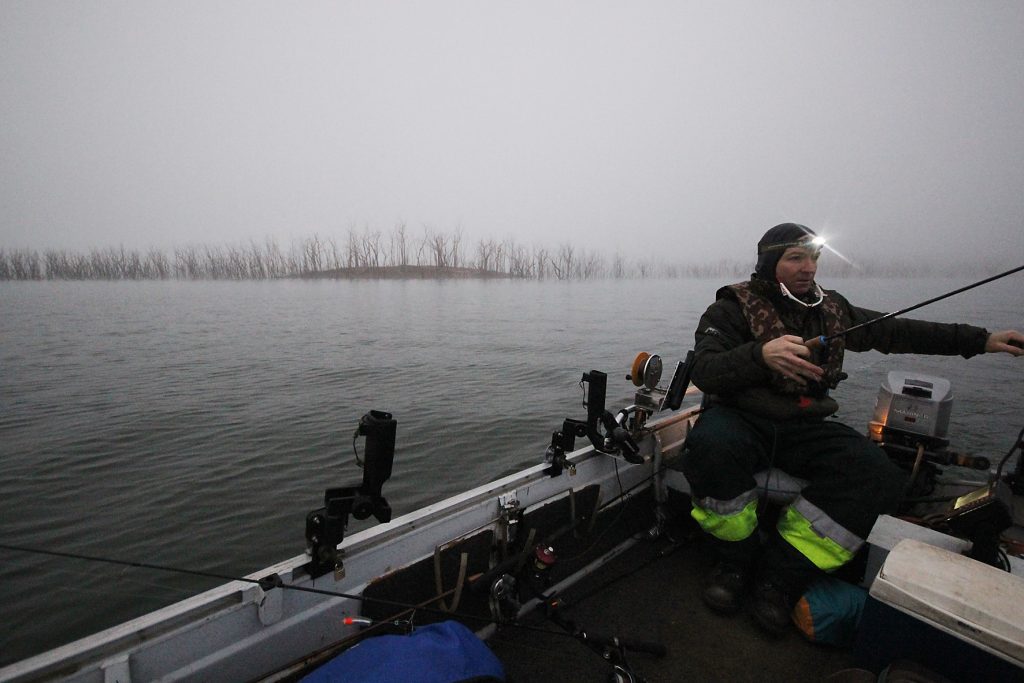 Early morning on Lake Dartmouth takes on quite an eerie and surreal feel, as well as a very cold feel! 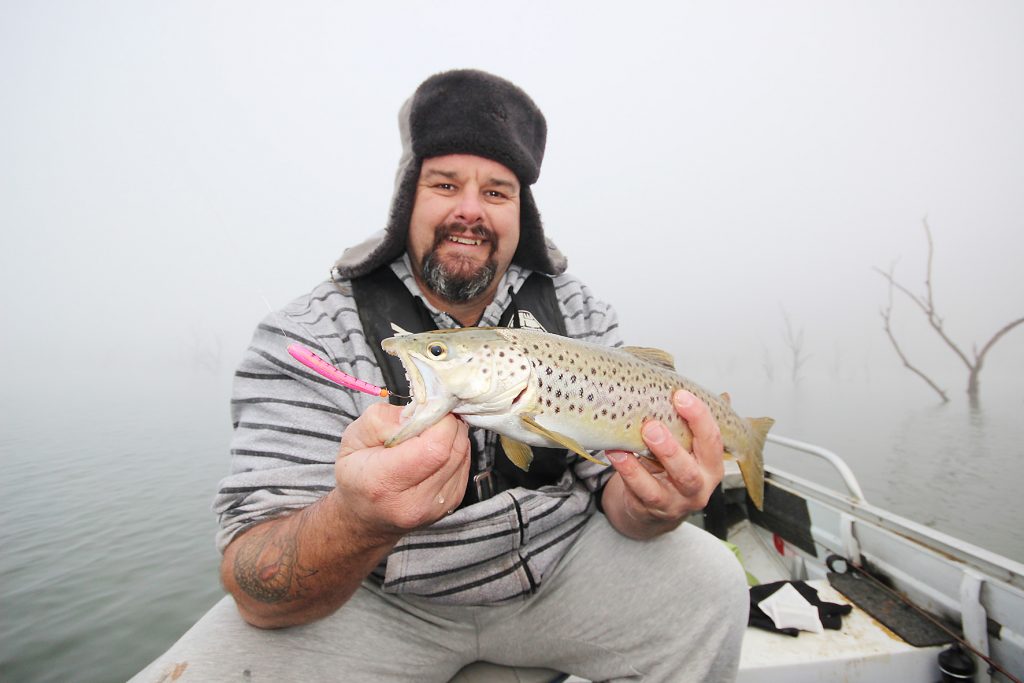 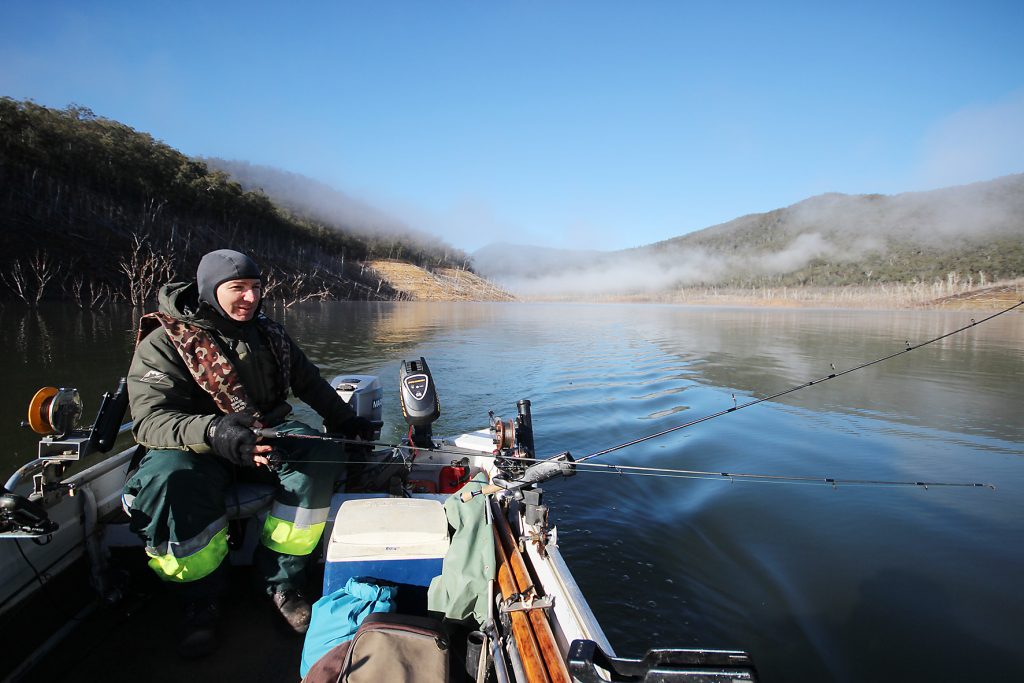 Lake Dartmouth can be a bitterly cold place during winter. Make sure you take plenty of warm clothes.

If you’re after some fast chaos, then Blairgowrie is a better location than any when it comes to Australian salmon. Although salmon schools show up at Black Rock, Frankston, Mornington, the Rip and right around the bay, Blairgowrie is a very reliable location, due to the marine wall being a natural attracting structure.

Every winter, schools of salmon hold up around the wall and frequently move between it and the moored boats. Around a tide change, they will come out into open water and bust up bait on the surface and can cast soft plastics and metal slugs into the school or if they are not up, trolling small 70mm deep diving hardbody lures along the outskirts of the wall and moored boats is a great way to locate a school. Once you catch one on a hardbody, you can then cast soft plastics for more light tackle sportfishing.

There is no doubt that whiting are one of the most tasty fish in Victoria, and while they are in plague proportions in the summer months, they are still a viable option throughout winter.

While sometimes difficult to locate, there are small pockets of fish in Western Port around Cat Bay and Flinders. However, for consistent success throughout the entire winter, St Leonards in Port Phillip Bay is the prime location.

Regardless of tide, the last two hours of the run-in or first two hours of the run-out tend to be when the fish are schooling in numbers. The most efficient method is to find a sand channel adjacent to weed beds and then set up anchor. Berley is a must and it won’t take long before the fish move in. Keep in mind, there are also a lot of calamari in this area, so it pays to flick a jig about over the weed beds while waiting for a whiting bite.

If there’s one species that you can rely on throughout winter, it’s the humble calamari. Right throughout Western Port and Port Phillip Bay, calamari are in abundance over the weed beds. They also move about, so they can be challenging to find at times. Fishing the top of the high tides is most profitable, as they will be on the hunt for a meal and as the tide begins to abate, they’ll begin to move into deeper water or into the weed to hide from predators.

Flinders would be the top pick for locations. Whether you’re in a boat or fishing from the pier, they’re always about.

Casting squid jigs in a size 2.5 and 3.0 is best, and for colour, if you’re finding the calamari hard to locate, use a purple colour to scout the area. If you find them in good numbers, toss out a red foil – they won’t pass it up.

Winter is most certainly one of the best times of the year to target gummy sharks in Western Port and although they are a year-round targetable species, during winter they are in their biggest numbers. I guess they don’t get the name Mustelus antarcticus for being prolific in summer.

While they are widespread throughout the port, the larger models are caught in the western entrance. Due to the strength of the tide, try to fish two hours either side of a high or low. Keep an eye on the moon phases and fish the slower tides. This will enable you to use a reduced amount of weight to hold the bait on the bottom without having to use a huge amount of weight.

When fishing locations such as the western entrance, berley isn’t essential, as the flow of water will prevent the berley from hitting the bottom. In this case, use good oily baits such as fresh salmon fillet, trevally fillet or calamari.

Finding a suitable location to fish is also important. Buoy 14, 12 and 5 are proven locations, however as long as you’re anchored along the edge of the channel in line with the channel markers and fishing the tide times, you’ll be sure to come up tight to a solid fish.

While there are still plenty of other species worth targeting in winter, the aforementioned are the most highly prized. Winter fishing is very productive if you can bare the cold. At the end of the day, just getting out on the water is a lot better than sitting at home on the couch.

by Jarrod Day • Winding through the mountain valleys and down through the lush green farm lands throughout the state, small creeks, streams and rivers are awash with trout. One of the more photogenic species […]

Tackling kings and getting ready for action

by Jarrod Day • It was back in 2009 when the first reports of kingfish being caught in Port Phillip Bay’s Rip began to surface. This was after a solid 20 year drought – they […]

by Paul Lennon • When it comes to putting food on the table, good old fashion bottom bouncing is still pretty hard to beat. It’s probably safe to say that drifting around with a paternoster […]