The humble luderick is a fantastic fish to target, especially during the cooler months when they are at their most prevalent. This time of year they can be found schooling up in protected bays along the ocean rocks or inside the estuaries along rock walls, over weed beds and around jetties.

Their abundance makes them a very popular species amongst anglers young and old, and fish-a-cast sessions are not out of the question even during the middle of the day. On top of that they put up a great fight on light gear and aren’t bad on the plate.

Despite all their attributes many anglers shy away from chasing luderick, because the way in which they’re targeted is a little unique compared to other styles of fishing.

The truth is that the art of catching these fish doesn’t take a long time to master, and as long as you’re set up right in the first place you should be able to get stuck into them right away. The first thing you need to work out is when you should be fishing for them.

While they love to graze on algae-covered rocks, a big part of how a luderick gets its food is by catching bits of weed flowing past in the tide. For this reason slack water is generally a slow bite period for luderick with the prime time being either side of a tide change when there is good water movement but not too much. Many areas less than a couple of metres deep will be too shallow to fish at low tide, but come to life around the top of the tide.

Once you have an idea of where you’re going to fish it’s time to source some bait and prepare a bit of berley.

Luderick are predominately herbivores, however they will at times eat a yabby, peeled prawn or even attack a big plastic or hardbodied lure. For consistent results, however, there are only two baits to use – green weed and sea lettuce.

Neither of these can be found in the bait freezer of your local tackle store. They need to be gathered. Both are fairly abundant, and on any given day one can work better than the other, so it pays to have both at your disposal. Sea lettuce can be gathered from the ocean rocks on a low tide when there is little swell and are also often found growing on mooring ropes and around wharfs. Green weed can be sourced around creeks, drains or at the base of fresh water run-off points. 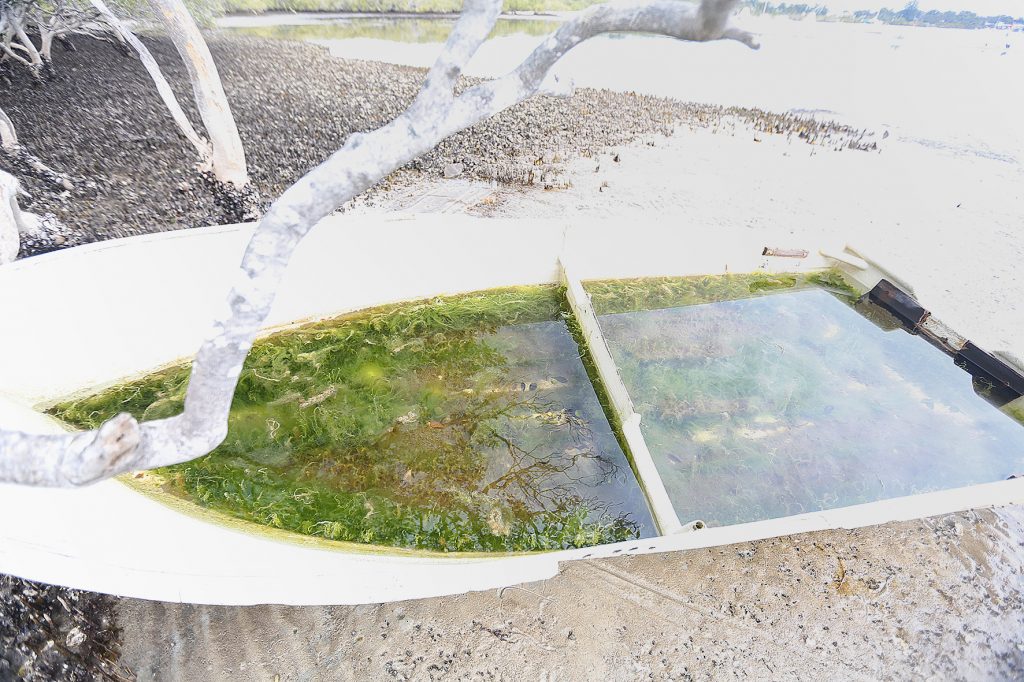 The secret to finding luderick is finding a good source of bait. 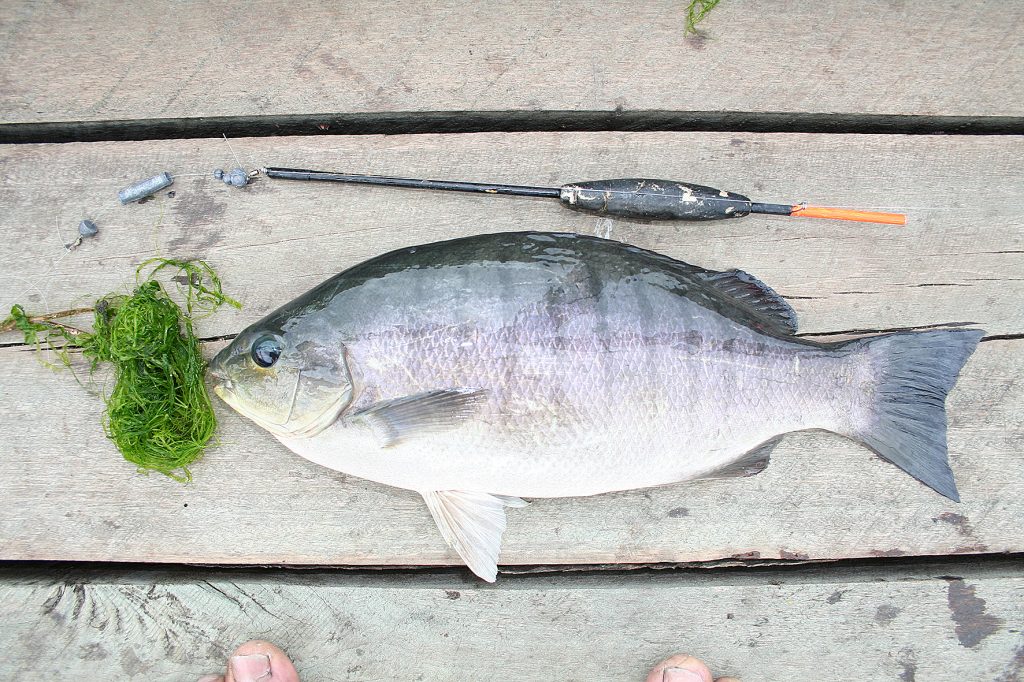 This luderick was taken on a traditional float rig. 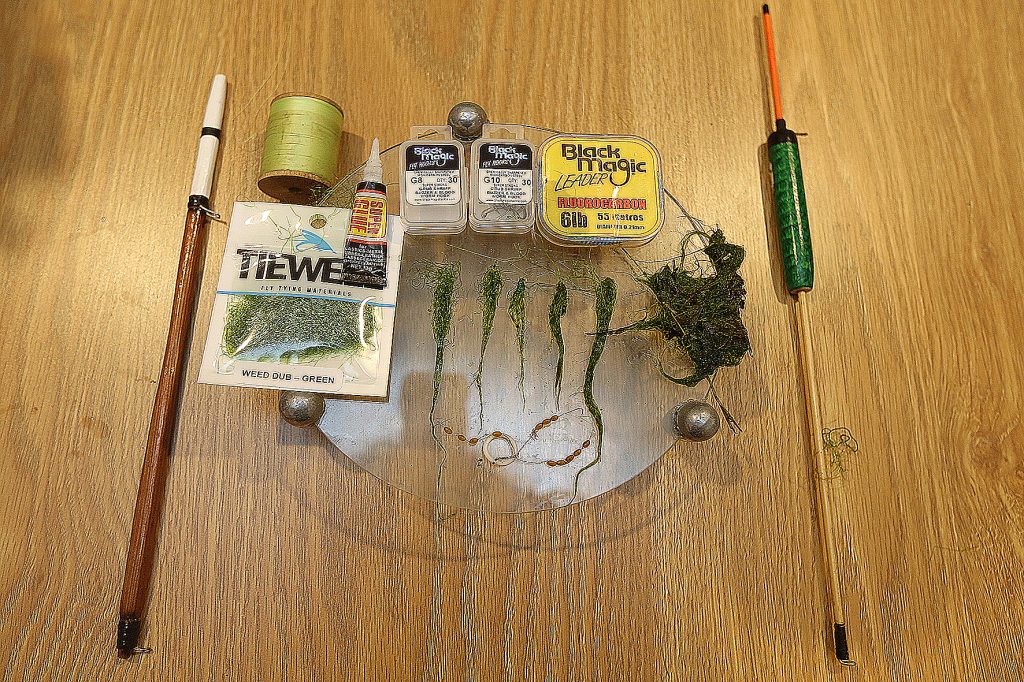 The essentials for chasing luderick. 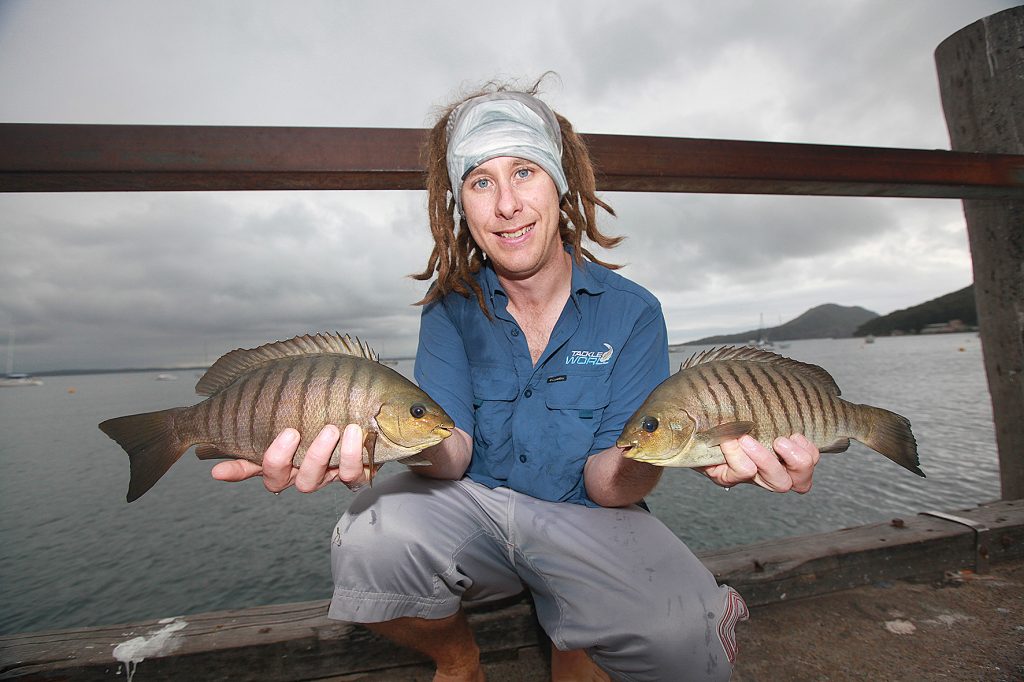 The author with a pair of quality luderick.

Imitation weed flies are also growing in popularity and really do work, especially when the luderick are biting well. Weed flies can either be fished traditionally under a float or in the shallow water using a 6w fly rod and strike indicator.

A berley mixture consisting of either weed or cabbage mixed with sand can often help turn fish on the bite; throw a scoopful around your float every five minutes. A good little trick to prepare rather than sitting there with scissors and cutting up your weed or cabbage into small pieces is to leave it out in the sun so it gets get dry and crispy, then just crush it over your sand and mix it in.

While there is nothing complicated about rigging up for luderick it’s very important to have everything right. By far the best hooks I’ve used for luderick are the Black Magic G10 and G8s. These Japanese-made hooks are super sharp and are the ideal pattern for perfect bait presentations, cabbage or weed. They also are the perfect hooks for tying your own weed flies on.

I use the G10S inside the estuary and G8s for off the rocks, as fish are typically lifted out of the water rather than netted like inside the estuary. The larger size also has the benefits of being strong enough to not straighten out if you hook onto a drummer, which are a regular by-catch when fishing for luderick.

From the hook I run a short length of around 60cm of Black Magic fluorocarbon leader, using 6lb for estuary work and 10lb off the ocean rocks. This leader runs to a swivel with a short 20cm length of 20lb line attached to another swivel. The short length of line between these two swivels is where you want to add a barrel sinker, and the size of it will depend on how big the float is.

The aim is to weight the float just enough so just the stem is sticking above the water line and the luderick feels little to no resistance when it takes the bait.

The best mainline to use is a 12-20lb floating line, which won’t sink like normal mono line. This allows any slack in the line to be removed quickly when striking a fish as it’s coming off the surface.

Attached to the mainline is a float stopper to adjust your depth. It pays to play around with it when things are quiet, as you may find them feeding better hard on the bottom or higher up in the water column.

Centre pin reels still remain popular for chasing luderick, but threadlines, especially small Baitrunner styles, will also do the trick just fine. Your rods should be around the 10ft mark for the estuary and 12ft for rock work, and need to be quite soft in the tip as luderick only have small mouths, and the shock absorption of a soft rod helps keep the hooks in there.

Estuary tactics and hotspots – Part 1 of 2

by Sean Thompson • The term ‘estuary’ basically covers the transition zone between the mouth of a river (where it enters the open sea) and the upper limits of its fresh or brackish reach. Estuaries […]

by Gordon MacDonald • With the cooler weather upon us, it shouldn’t be long before the luderick turn up. With last year being one of the best seasons for many years, anglers will be keen […]

Successful fishing off the rocks

by Gary Brown • I have been fishing off the rocks since I was a kid, and have learnt so much from the many anglers I have fished with over the years. This knowledge has […]