This month’s Kayak Hotspot takes you to the picturesque mid north coast town of Urunga, situated a casual 20-minute drive south of the CBD of Coffs Harbour, and a leisurely 15 minutes north of Nambucca.

As you enter the town you’ll see a sign saying ‘Urunga, where the rivers meet the sea’, and there’s no better way to explain it than exactly that. The town is built right where the Bellinger River and Kalang River merge into one and enter the sea via an ocean bar. So it really is a ‘choose your own adventure’ kind of location!

Urunga is a relatively small town but it still boasts plenty of accommodation options, including a variety of caravan parks, offering both powered and un-powered camp sites. And for the people wanting a little more comfort there’s a multitude of cabins and even very affordable fully furnished units available at the Riverside Holiday Resort. It’s all within walking distance to cafes, hotels, grocery stores and of course the water. Three of the holiday parks also have river front access.

After calling into the local tackle store in Coffs Harbour (MO Tackle & Outdoors) you will leave with some great insights as to what to chase at this time of year, where the best places to launch are, and of course a few new lures to test out while out on the water.

I also recommend contacting Dale from Freshest Fishing Tours if your main priority is catching fish. Dale has a wealth of knowledge of the area and is definitely worth spending some time on the water with, that’s for sure.

And if you particularly like chasing flatties, you can enter the annual Berkley Urunga Flathead Tournament. Every year on the second weekend in November this sleepy little town comes alive with anglers from far and wide coming to compete. It’s a fun catch, photo and release friendly fishing competition, and it’s open to anyone and everyone. It’s well worth looking into if you are interested in lure and fly fishing competitions. 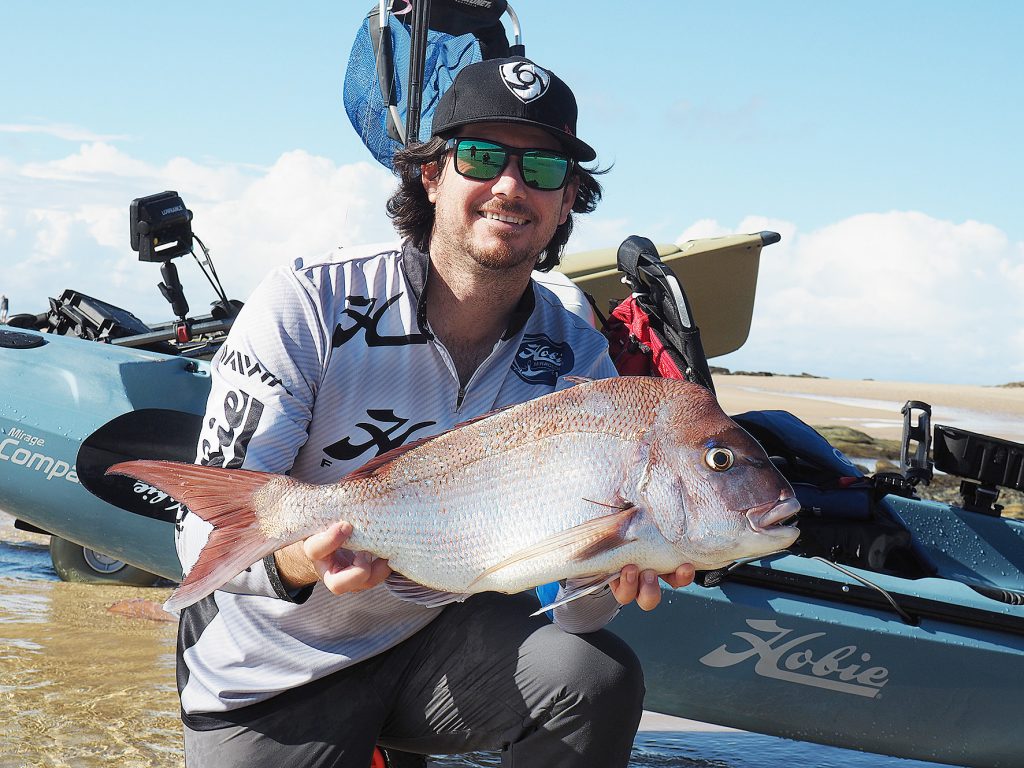 Craig Hanlon with a snapper from Wenonah Headland. 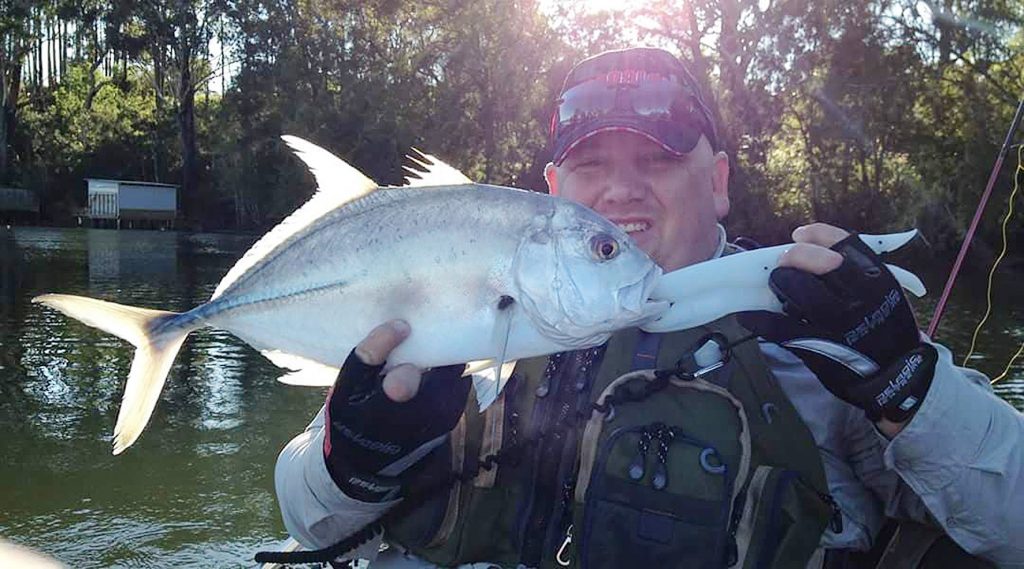 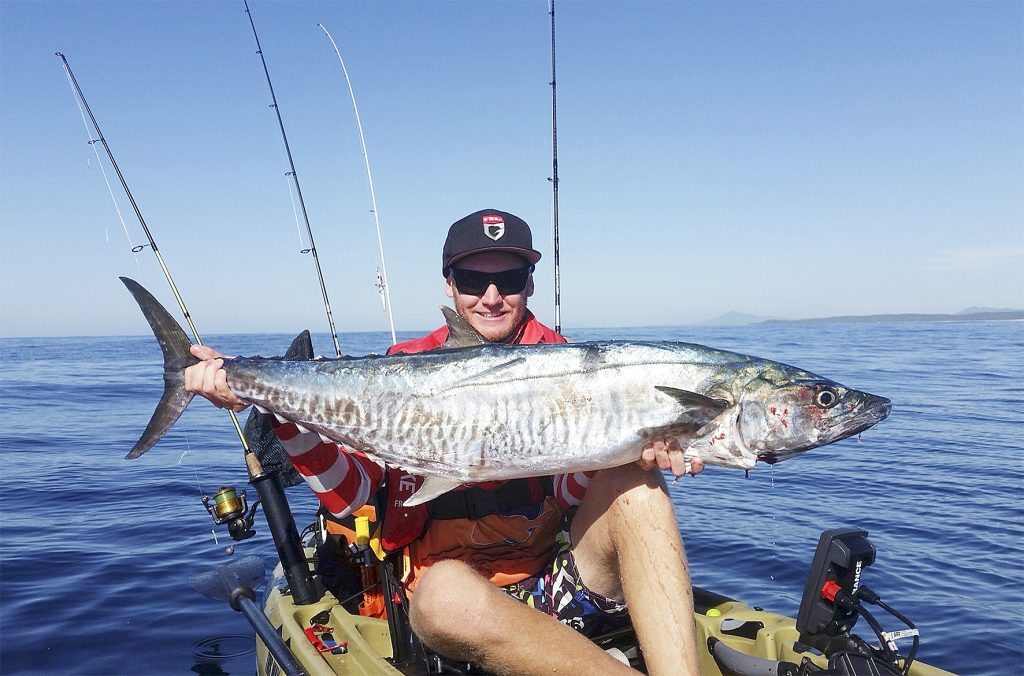 Jason O'Brien with a Spanish mackerel caught out from Urunga. 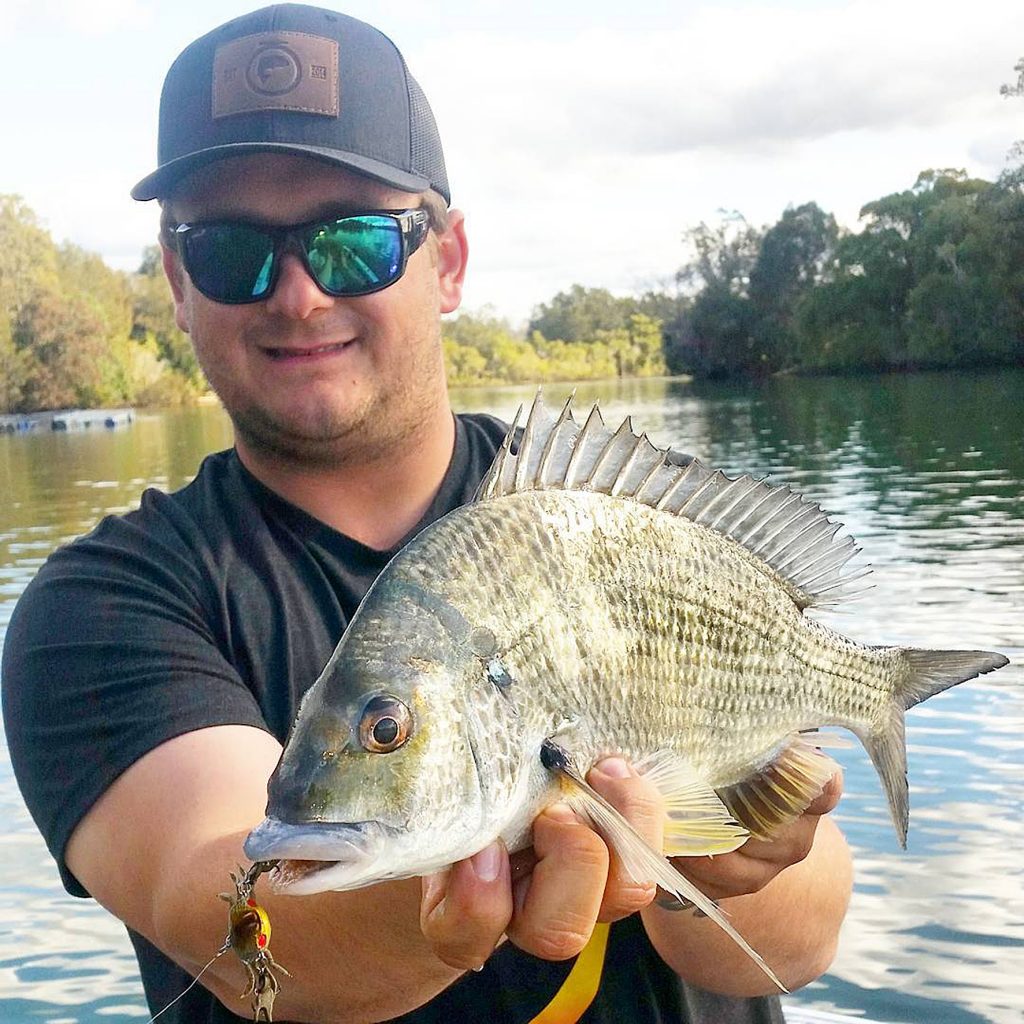 The author caught this Belinger River bream on a Cranka Crab.

Urunga has plenty on offer for kayak anglers! There are many places to launch your kayak in the river, and the most convenient is along Atherton Drive. It includes two public boat ramps and a stretch of approximately 1km of river frontage.

Both the Bellinger and Kalang Rivers are recreational fishing havens, and offer a vast variety of estuary fishing options. In the lower tidal stretches of the river systems you will find miles of clear water covering sand flats, manmade rock training walls, bridges, pontoons and jetties. It’s perfect for chasing bread and butter species such as bream, flathead and of course whiting. Some of these same areas also have trophy-size mulloway, trevally (big-eye and juvenile giant trevally), and mangrove jack all co-mingling together.

Additionally, just 10 minutes’ drive west (or a solid couple of hours in the yak upriver), you will find plenty of Australian bass in the brackish and freshwater. That’s the kind of location that kayak anglers’ dreams are made of!

And if the weather is good and you are comfortable in the yak offshore, these waters are teeming with plenty of reef species. A great location to launch your kayak is just five minutes to the south at a headland called Wenonah Headland. This spot has plenty of room for car and trailer parking, typical bush toilet facilities, a nice little wood fire BBQ area and 4×4 access to the beach, where there is a protected bay ideal for launching kayaks. This location is also used by the local deep sea fishing club (the Urunga Anglers) to launch boats, so the access to the beach is well maintained.

When fishing the inshore reefs you can expect to encounter snapper, pearl perch, kingfish, mulloway and samsonfish year round. And the warm northern currents from late December through to June usually bring with them plenty of pelagic species as well, including Spanish and spotted mackerel, northern bluefin tuna and even the odd black marlin.

A quick Google Earth satellite search of the area will show you just how much fishable reef is literally metres from the shoreline. You will not have to paddle or peddle far at all before you start fishing.

The gear I recommend to take offshore is a fast action 7’ 10-20lb rod matched to a 4000 size spin reel. Anything similar in length for a nice long cast in the 10kg weight range is ideal for throwing plastics around in search of a nice big shallow water North Coast knobby snapper. Plastics such as the Berkley Gulp 5” and 7” Jerk Shads are a personal favourite of mine to trick these fish also.

A quality sounder with a GPS/map that also shows the water depth, or even one that can mark bait and fish, definitely makes life easier but it’s not essential.

So whether you’re a bait or lure fisho, or even just looking for a relaxing kayak getaway, Urunga has plenty on offer for everyone!

Hotspot: Fishing for flatties in the Clyde River

by Toby Grundy • One of my favourite species to target during the cooler months is flathead, and there is no better place to pick up a nice bag of crocs than the Clyde River. […]

by Reece Thomas • Lake Kurwongbah, also known as Sideling Creek Dam, is situated on the northern suburbs of Brisbane approximately 40 minutes drive from the Brisbane CBD. The dam is used primarily as a […]

by Justin Willmer • I have spent many moons on the water kayak fishing, however recently I’ve only had a handful of offshore adventures. The bulk of my time has been spent in the rivers, […]