Up until recently, I assumed that the mighty Murray cod was an elusive fish to catch. Apart from chasing the odd bass on a hot summer arvo, I had never really fished freshwater – especially the dams. Over the past few years, however, I’ve been working in Tamworth, NSW, which is in the heart of cod country. Before my contract ended, I decided I’d better take the opportunity to catch one of these green machines.

The only problem was that I had no idea where to start! When you sit down and think about it, you can’t just set out with your 2-4kg outfit and have a crack like you’re chasing bream. These fish can grow to a massive size, and easily reach over a metre in length. I turned my attention to fishing articles, YouTube videos and of course, local knowledge. When it comes to chasing a new species (or even a familiar species in a different location), local knowledge is key. Fortunately, my work colleagues were born and bred Murray cod fishermen and they gave me heaps of pointers and years worth of knowledge to better my chances of achieving my goal. This a proved to be a definite edge.

Dean from Tamworth Fishing Tackle & Great Outdoors is a wealth of knowledge when it comes to cod fishing. I have been fortunate enough to head out kayak fishing with Dean in the local river system. With the river being low we basically floated around in the deeper holes and dragged the kayaks over the rocks between the pools. Dean encouraged me to target the deeper looking water that had cover like overhanging branches or logs coming down from the banks into the water. The stand out tip I learnt from that trip was that when you think you’ve thrown at a snag 20 times and you’re about to move on, throw another 20 times because the fish may well hit on the 40th cast. If I hadn’t been told this, I probably would have moved on from a snag after the 5th or 6th cast. 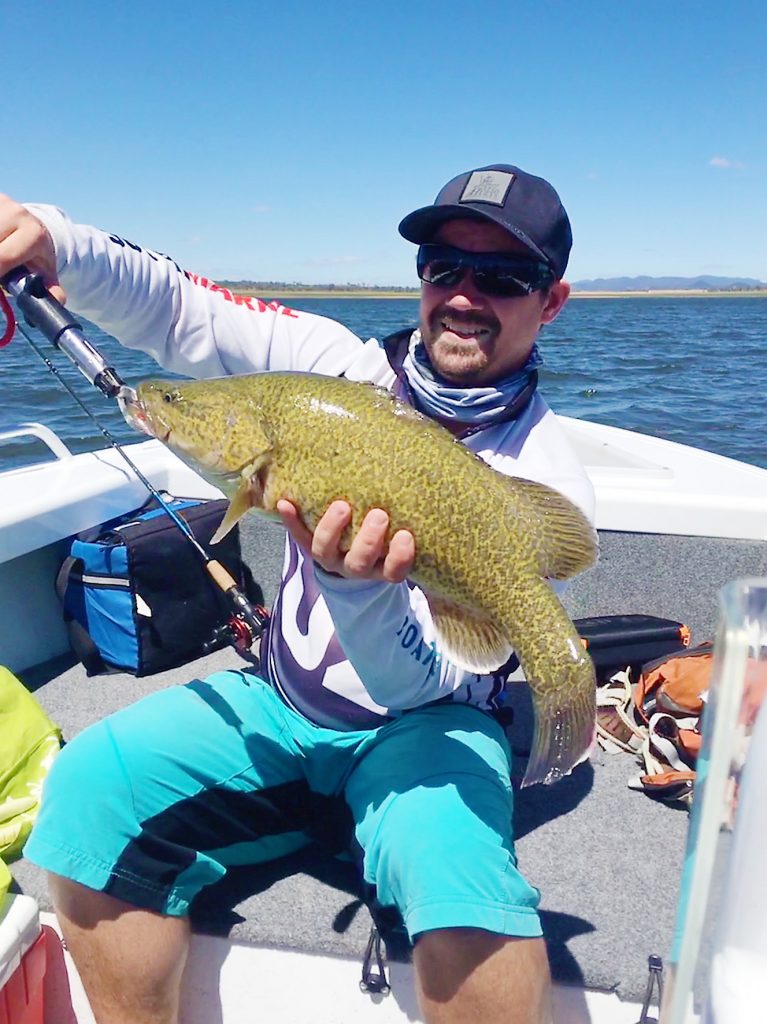 The author with a 55cm Murray cod caught on an AusSpin 3/8oz spinnerbait. 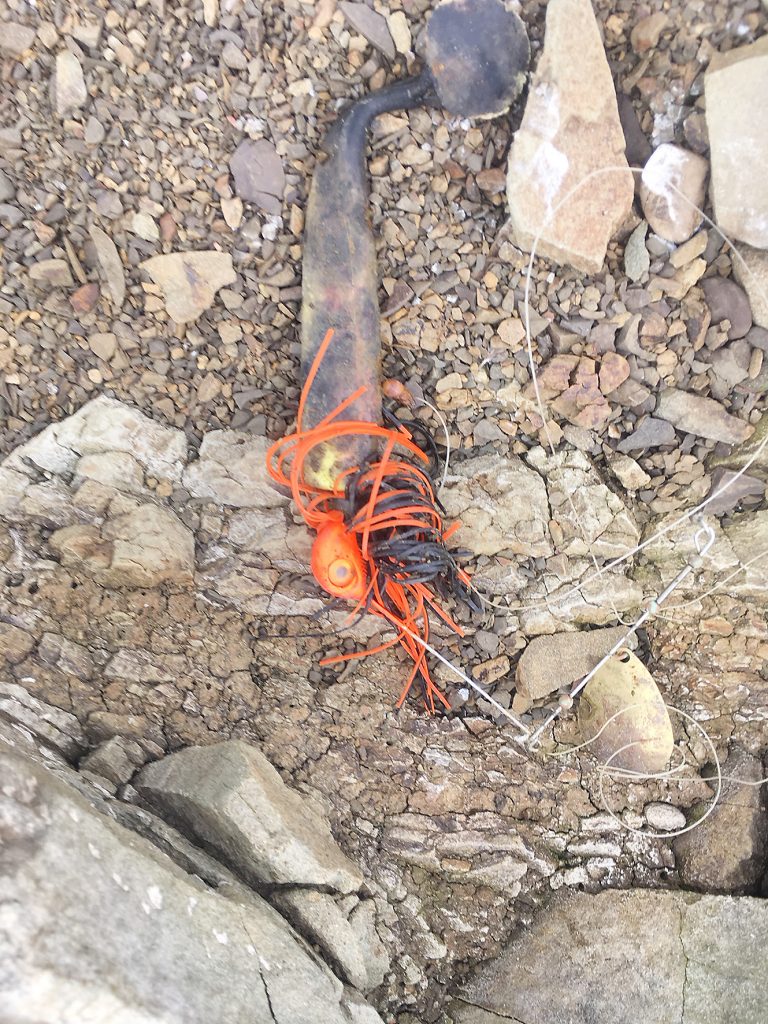 The remains of an old spinnerbait found on the bank. 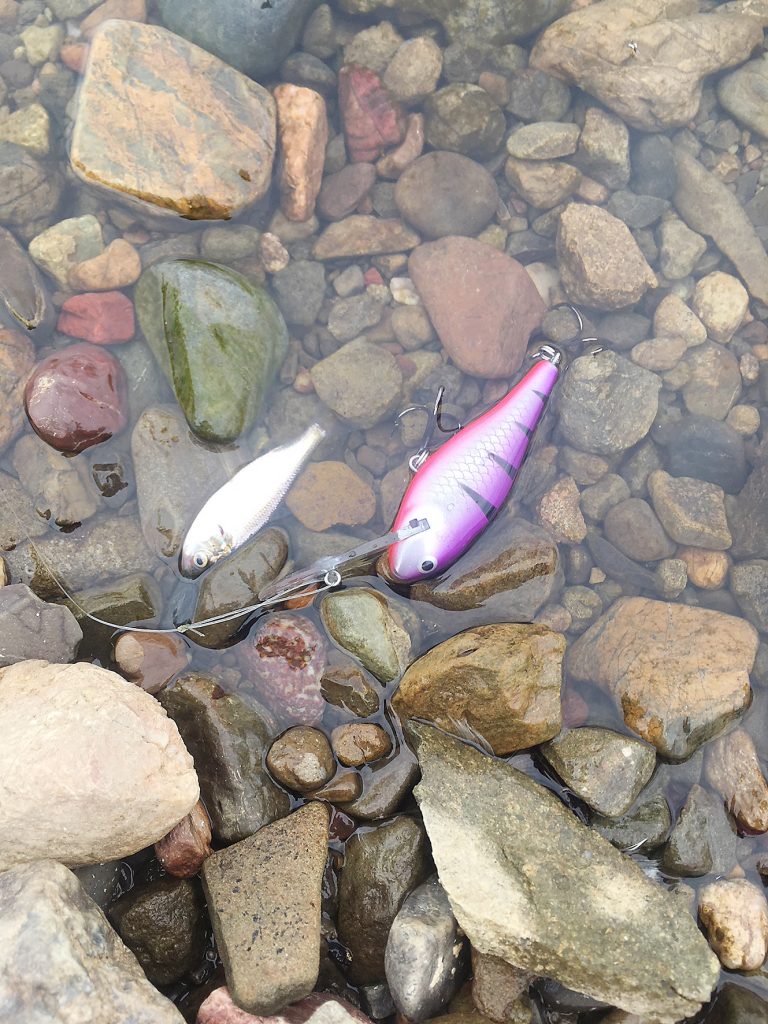 This Bagley deep diving shad in colour 07 (grape tiger) matches the bait washed up against the bank. 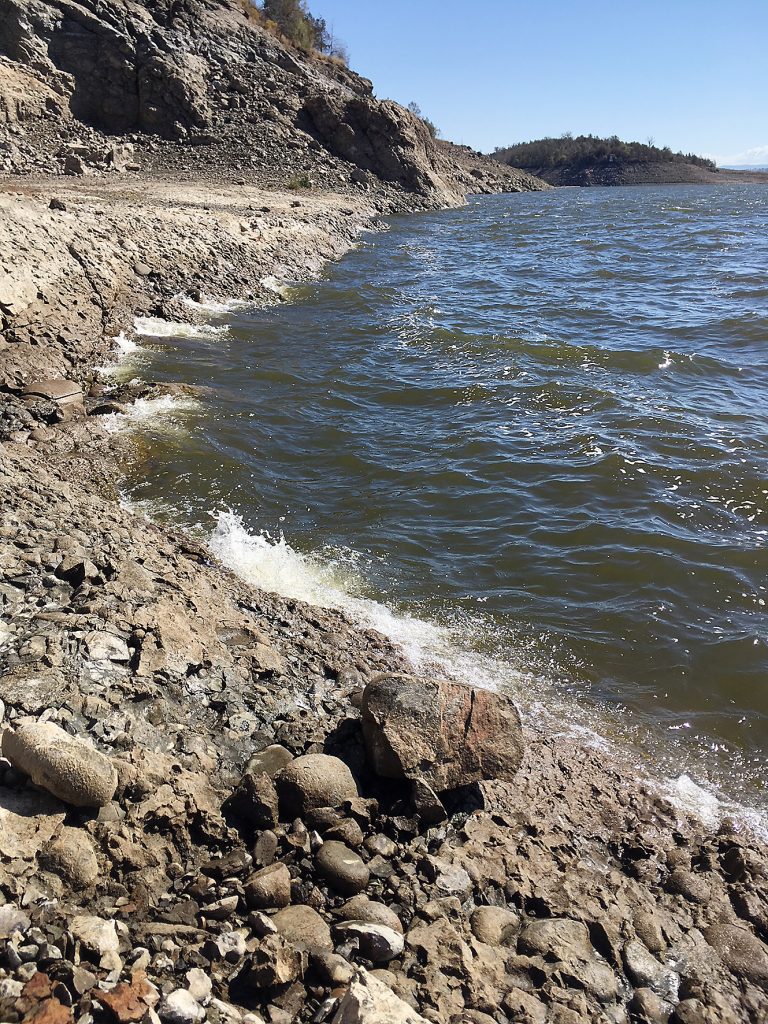 A steep, wind-blown shore bank at Lake Keepit, with a deep stretch of water to work lures. 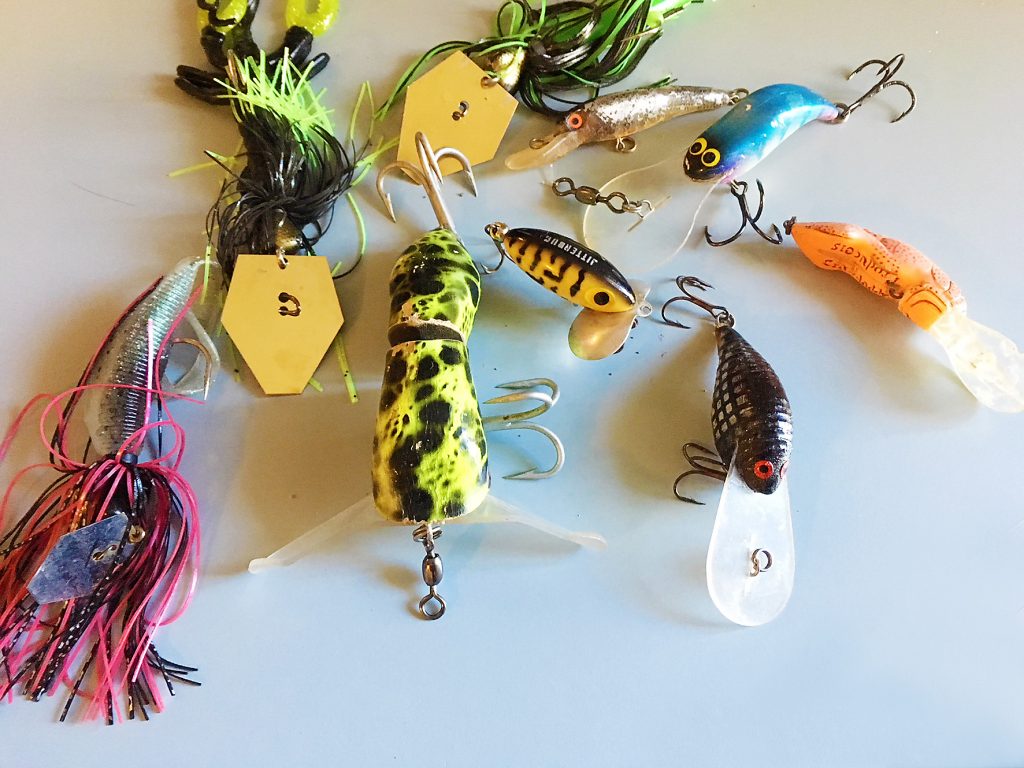 Some of these lures were purchased, and others were found. The author purchased the AusSpin Cod Botherer and Chatterbait with ZMan trailer, and found the Taylormade, Jitterbug, Marz VooDoo, Feralcatt and two randoms. 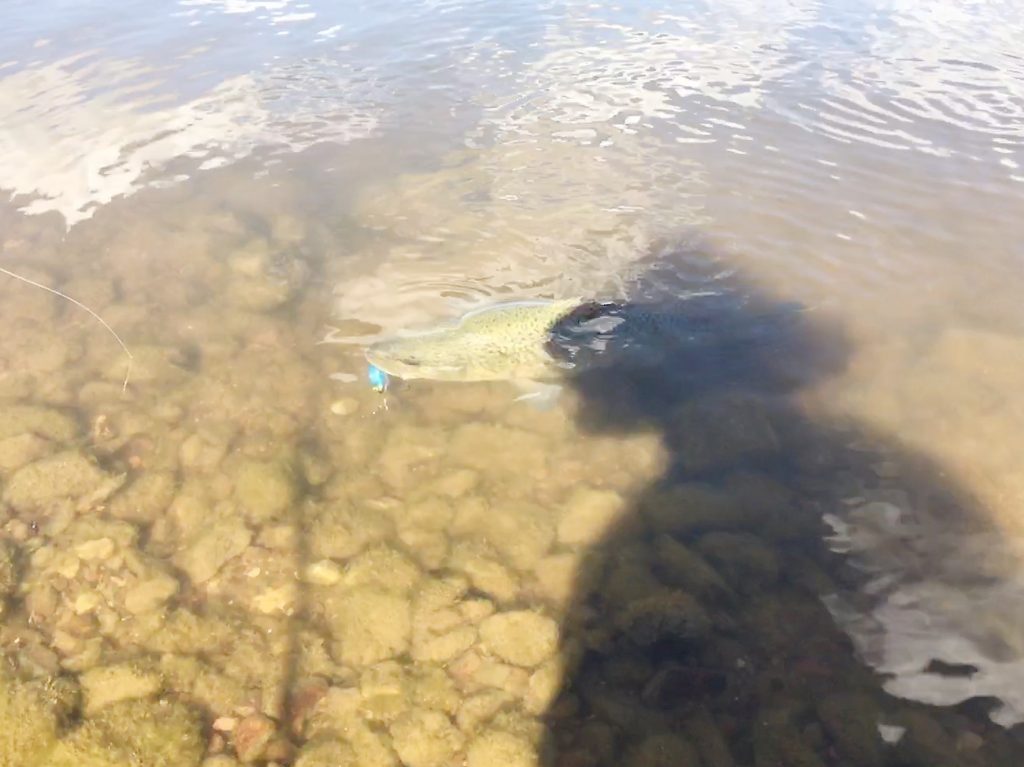 You don’t need a boat to catch Murray cod. 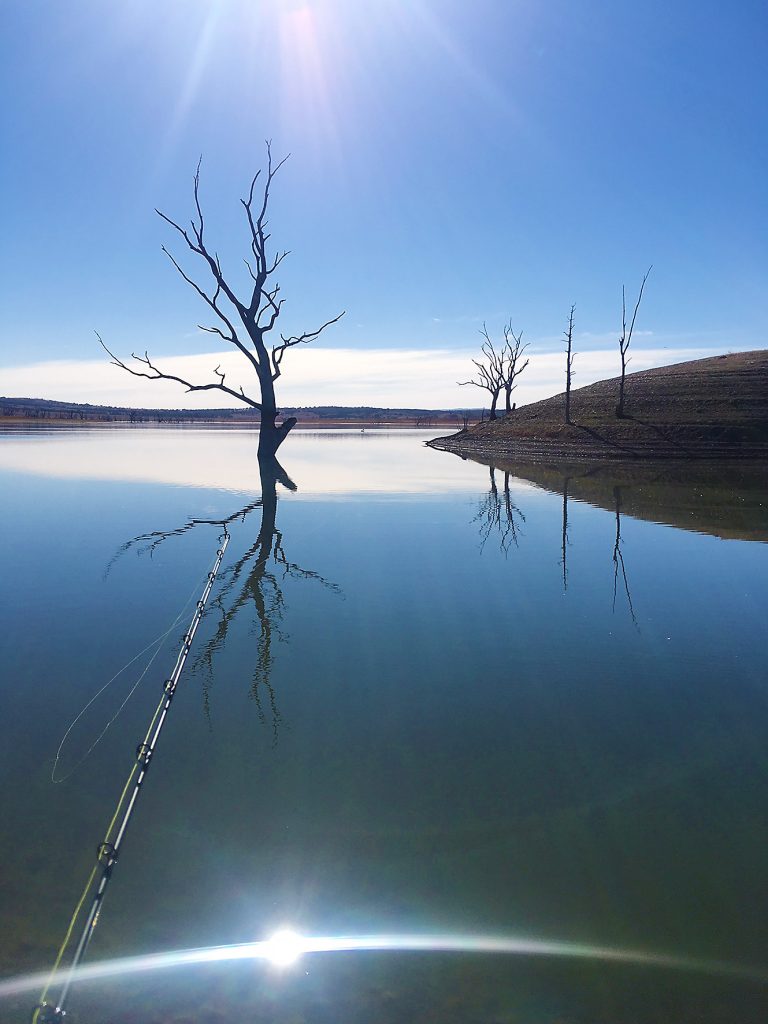 A steep bank and glassed out bay at Lake Keepit.

So where to from here? Tamworth, like a lot of the country, is in drought. Accessing good stretches of river that aren’t fished heavily can be a little tricky, but seemed like the best place to start. I started by covering some likely stretches of river during the daylight hours, and returned at night to have a more serious attempt. Temperatures were an inviting 2°C some mornings, which has got to give me points for dedication, right?

Over 10-odd attempts down the river at all hours of the night, all I had to show for it was a few heart-in-mouth moments when a big cod came out, lashed at the lure and didn’t connect.

Walking the river isn’t as easy as it sounds. With the water level so low, I regularly encountered vertical banks that you couldn’t get around without trespassing through someone’s property. There were sign posts everywhere saying trespassers would be shot on sight, so I decided I had better turn back.

Following my attempts down the local river system, the lads from work threw me an invite to jump in the boat and head out to Lake Keepit, which is located 40 minutes from Tamworth. This lake was quite low at around 13%, but don’t be fooled – even at 13% there is still plenty of water for cod to hide in. The lake is lined with steep rocky drop-offs, logs, tall standing timber, huge shallow bays and more.

Heading out from the boat ramp, my anticipation of catching such an iconic Australian fish was growing by the second. On the way one of the lads whipped out his bag of lures to give me an idea of what cod like to smash. It was like Santa’s sack! Lures like StumpJumpers, Oar Gee, Feral Catt, Mud Eyes – they just kept coming. All of them were big profile lures that got down to around the 4-10m mark, which gives you an idea of water depth you need to look for in the dam.

By the end of our trip, the lads had trolled up a number of cod and I also had success flicking a 3/4oz AusSpin spinnerbait off the front of the boat as we trolled around the headlands. It was great to finally tick this species off the list, but it’s one thing to catch them when you’re with experts, and another to do it by yourself. I was keen to set out on my own and catch more.

The trip had given me a valuable insight into cod and their habits, but more importantly it got me thinking. The fish had come from within casting distance from the bank, so maybe I didn’t have to fish the dam from a boat.

I decided to leave the river alone and focus on walking the dam, flicking lures from the edge. Walking along the edge and casting gives you a lot of time to scope out an area.

Previous anglers had helpfully left behind lots of clues on the ground. As the water in a dam recedes, it reveals all sorts of lures and other gear that was previously submerged. There were lost sinkers, hooks, spinnerbaits, soft plastics and hardbodies scattered along my walk, and I inspected all the structure where everybody seemed to fish. It was very interesting to see how other people had gone about catching cod.

Over a few days I came across lots of people bait fishing from the bank, but I didn’t see anyone throwing lures. Although I was using the right types of lures – the ones that my friends had recommended to me – I couldn’t win a trick. I needed to figure out what I was doing wrong.

While back at work I wondered how I could better my chances. I thought back to what sort of depth we were in when trolling in the boat, which was around the 10-20m mark. I also put a lot of thought into my outfit. I decided to shelf the baitcaster and rip out an 8ft spin stick matched up with a 4000 reel loaded with 20lb braid. This is probably on the lighter side and a little unconventional for dam fishing, but I needed the extra distance on every cast, as it would allow me to cover more ground.

My next consideration was the structure. Instead of just trying every little point or just randomly throwing a lure, I decided to concentrate on the really steep banks and rock ledges. They are harder to walk, but they provide excellent access to the deeper water.

My next consideration was to send out prospecting lures first – something like a spinnerbait that would allow me to not only fish the entire water column, but act like a poor man’s fish finder.

SUCCESS FROM THE SHORE

It was time to put my game plan into action, and I didn’t waste any time getting back to the dam. I spent most of the time working the bays with steeper banks where I could easily hit the deeper depths, and using my spin outfit ensured that I was covering as much ground as possible.

Following some good hits and a couple of near misses on a the spinnerbait, I decided to tie on a Feral Catt that I had found on the ground earlier. A nice long cast and a few quick cranks got it down in the water column. My retrieve was slow with a pause, and on the third pause my lure got smashed! My drag spewed line out and I got a little nervous as I thought the cod may have had a log to run back to. After a few minutes and three solid runs I had finally chalked up my first cod off the bank. So stoked!

It had been a long journey with disappointing results along the way, but to get one on the board with some out-of-the-box techniques was a great feeling. And since then, things only got better.

Unfortunately, just as I was hitting my stride, the cod season closed, and it won’t open until December. Still, I figure this just gives me more time to think of some more unconventional fishing techniques!

• Target structure where the fish are likely to hold (in this case, the steeper banks and rock ledges)
• Where possible, try to get wind-assisted casts
• If you don’t have a castable fishfinder, send out some prospecting lures, such as spinnerbaits
• Don’t be scared to think outside the box
• Use tough terminal tackle, as these fish will destroy inferior gear
• Seek local knowledge; if you can get some tips, stories or hints you’ll be halfway to your goal

by Dayne Taylor • Copeton Dam is located on the Gwydir River, around 35km southwest of Inverell on the northwest tablelands of New South Wales. At full capacity the lake spreads out over 46km2, with […]