Like so many fish species across the region, trout can be very hit and miss during May. This is typical of trout fishing late in autumn anywhere in the world as they lead up to their annual spawning run.

When I say lead up to their spawning run, in some of the smaller cooler waterways the brown trout will often start spawning in May. For a long time I have wanted to see the Victorian trout season close at least a fortnight earlier than it currently does, but unfortunately this does not look likely to happen.

The problem is that the brown trout usually spawn from around late May until late June, and occasionally into July. The rainbow trout spawn much later. They don’t start spawning until around mid July and can go right through until mid September. The only way to have a closed season that would offer full protection to both species would be to close the trout season at the start of May and re-open it at the start of October, leaving a total closed season of 5 months.

This would be great for the trout and the trout numbers, however it would be quite detrimental to the areas where trout fishing is such a draw card for communities who rely on anglers to pour money into their towns. Not to mention having a 5 month closed trout season would be nothing short of painful! So, as it is the current closed season offers protection to both species in part, while they spawn.

WHAT CAN WE EXPECT?

Apart from lots of autumn colour in the sub alpine towns where the trout are usually found, we can expect some hot and cold trout fishing, low water levels, icy cold starts and cool days.

Each year during autumn, usually during April, the shorter days and cooler water usually trigger the trout to start swimming upstream to spawn. Trout are an annual spawner, meaning they will swim upstream regardless of conditions, provided there is enough water in the rivers and creeks for them to move about freely.

They leave their usual residence and swim upstream to spawn, where they will join trout of the opposite gender (called pairing up) and park themselves over an area of fine to medium gravel known as a redd. They can spend considerable time paired up over the redd, and at this time the male can become very aggressive towards other fish.

The redd is where the trout spawn. The female will use her pectoral fins and tail to dig a depression in the gravel. Then, when she is ready she will drop her eggs in that gravel. The male will then move over the eggs and fertilise them before the female returns to gently bury the eggs, usually by digging another hole in the gravel at the upstream side of the redd so that the newly dug gravel can gently settle on top of the now fertilised eggs.

The fertilised eggs will sit underneath that gravel (in the redd) for up to 6 weeks until they are ready to hatch. Once they hatch, the newborn fry will find their way out of the gravel. The fry will feed on the eggsac for a few days, during this time they will float freely downstream until they are strong enough to swim for themselves. This is the whole reason the trout swim upstream to spawn in the first place, to allow for the fry to float back down once they have hatched. 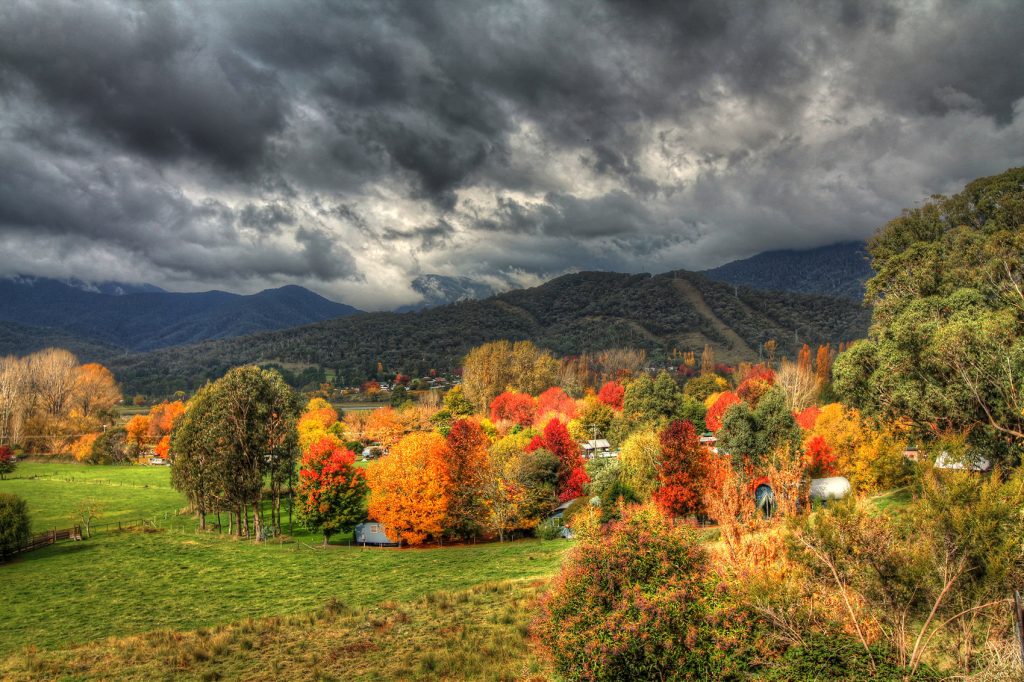 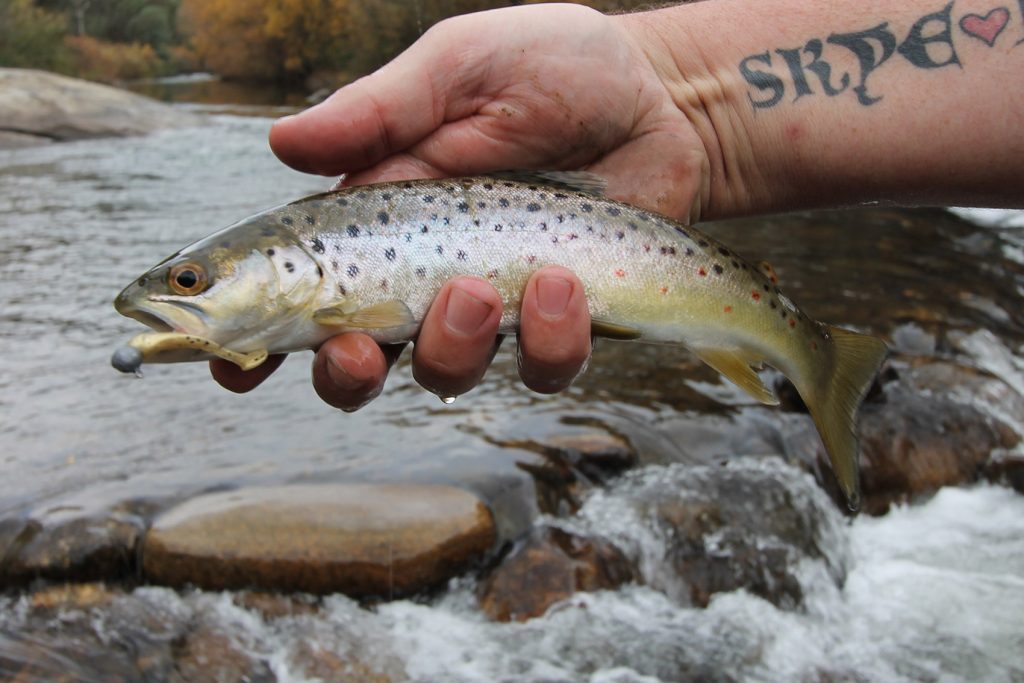 Trout often become very skinny and underweight during autumn when they prepare to spawn. 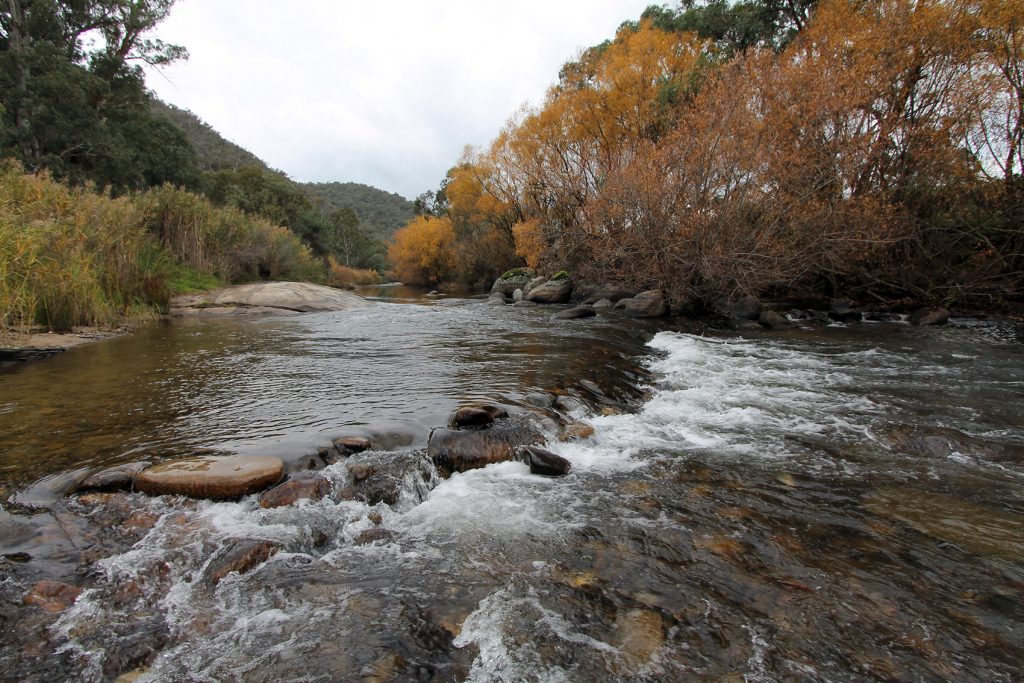 A lovely stretch of the Kiewa River that is a perfect spot for targeting trout. A small rainbow trout from a tiny mountain stream caught on a Wildbait minnow. Minnows can be great lures to tempt trout during May, as the trout are building up to spawn and can become quite aggressive. 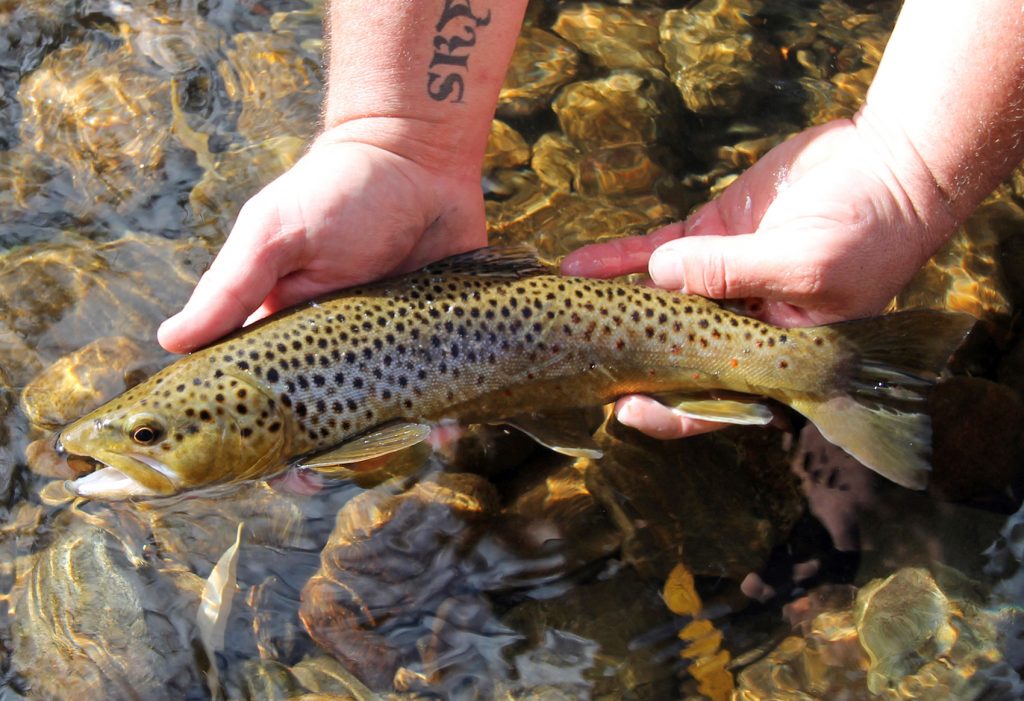 A lovely brown trout caught last May that is just about to be released. Could there be a prettier fish? 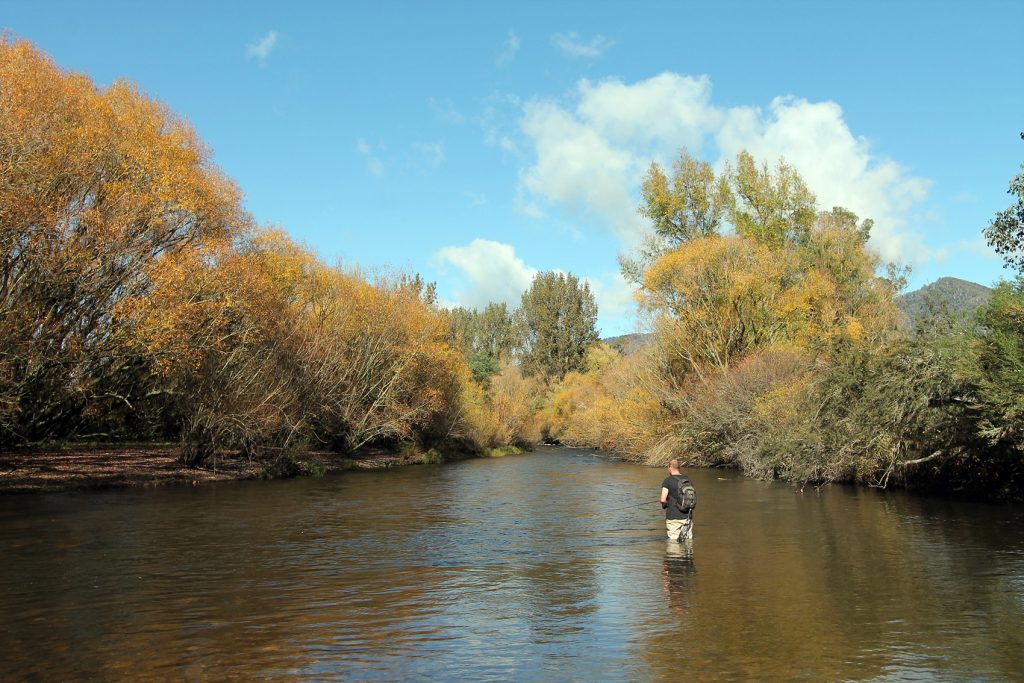 Brenton Richardson fishing a lovely open stretch of the Kiewa River during May last year. A good looking area for trout to spawn. Small to medium sized gravel in shallow flowing water like this can make an ideal redd (nest area) for the trout. 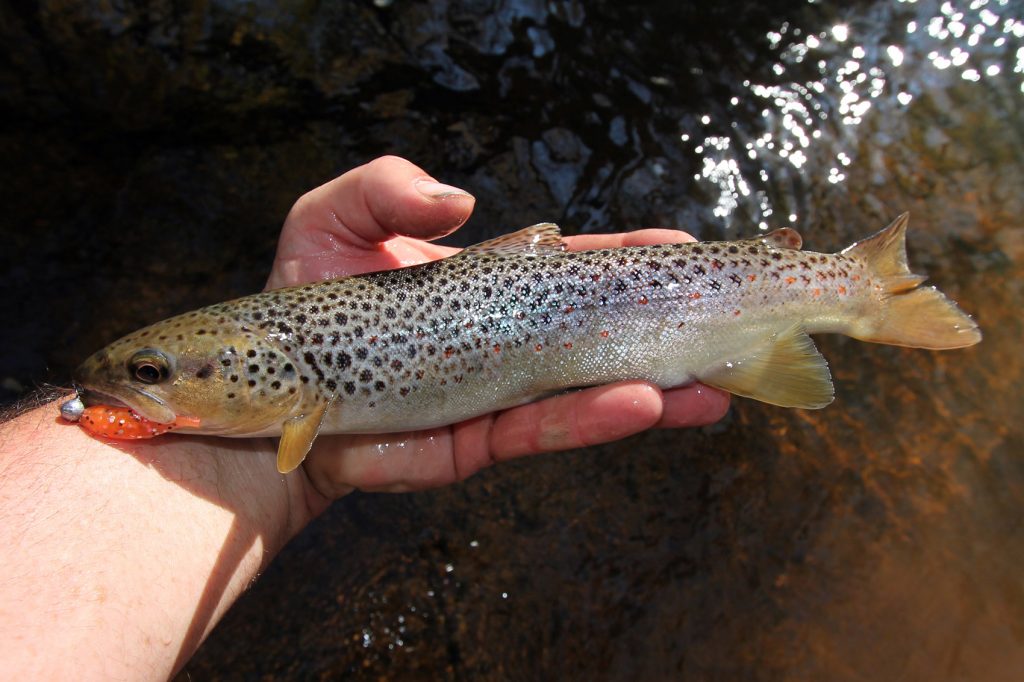 Brightly coloured lures can give a distinct advantage when trout fishing pre-spawning.

NOW TO THE FISHING

I will fish during May until such a time that I notice evidence of trout spawning. It is quite obvious to see when trout have spawned over a redd, as the areas of medium sized gravel appear to have been disturbed. Usually there are mounds and depressions in the gravel areas where the trout have spawned.

Early in May the trout are often still on the move upstream. This can be a fantastic time of the year to fish for trout as the larger trout swim upstream from their usual hard to get to places in remote stretches of waterways and into the easy to get to spots.

In spring and summer, the adventurist angler has a clear advantage when they walk for kilometres, climb down rocky outcrops and tackle blackberries head on to get to the more remote areas. In May, the trout leave these remote areas to swim upstream to spawn and are often caught in areas of high fishing pressure as they pass through. So if you have fished a certain stretch of water during the trout season and had no luck, don’t write it off as it could well become productive during May.

Another thing to remember is that trout can not climb walls and waterfalls, so barriers that prevent trout from swimming further upstream can be real hotspots during May. Spillways, small waterfalls, and other artificial obstacles can prevent trout from swimming upstream to spawn, so these areas can really turn it on during May as the trout have a tendency to bank up on the downstream side of them.

In North East Victoria, one such place that does just that is the Mt Beauty pondage on the Kiewa River. Each year trout in the Kiewa River try to swim upstream to spawn and get as far as the Mt Beauty pondage and can get no further. That is why, despite the fact that hundreds, if not thousands of people fish under the spillway each season, large trout to 4lb get caught there each year in autumn.

I do not want to give a false impression, so don’t go there expecting to catch heaps of 4lb fish. They are not caught en mass as there are not huge numbers of big trout in the Kiewa River anymore, however each year a handful of monsters do get caught at that spillway by anglers that are there at the right time.

My late brother in-law Frank Alfieri from Mt Beauty caught one of these monsters at the spillway himself a few years back.

It’s all about fluorescent colours during autumn. During March, I love using black lures to target trout in streams. Black soft plastics, black flies, black spinners etc… There are a lot of black bugs and insects in the environment during March, with crickets being the main food source for so many trout.

During April and May the emphasis switches from black to fluorescent as the water begins to get really cold. Why this is so I am not 100% sure but I do have my theories.

Trout eggs can vary slightly in colour, however they are usually bright orange. As the eggs hatch out of the gravel and begin to float downstream, the trout feed on them like there’s no tomorrow. So bright orange works well in May.

Fly fishers use flies called glow bugs that replicate a drifting trout egg. The use of real trout eggs has been banned, and last year one bloke got caught fishing in the Rubicon River using trout eggs for bait. It ended up being a very costly fishing trip for that man!

So the trout are already looking for fluorescent colours in the autumn. I think that is why I have so much success with the fluoros each year in April and May. Whether it’s the fluoro orange Super Vibrax bladed spinner, or the same spinner in fluoro yellow it doesn’t matter, as long as it is fluoro.

Last May I had a cracker of a day on the Kiewa River with my wife Lauretta, fishing a section of river that gets heavily fished all season. I was using a fluoro yellow soft plastic that I make, known as a 40mm Metalhead soft plastic. I named that colour WASP as it is a similar colour to the tail of a European wasp.

It is a small 40mm paddle-tail minnow in fluoro yellow colour and the trout were literally climbing all over it. It didn’t seem to matter where I placed my WASP a trout would hit it.

The Kiewa had fished slowly all season, and then BANG they were on like Donkey Kong! Typical of May trout fishing, I returned the following week with my mate Brenton Richardson and we caught 2 tiny trout for a whole day’s fishing. Refer back to the very start of this story where I mentioned that May trout fishing can be very hit and miss!

• Author’s note: The photos were taken in May 2014 (last year). Since then I have embarked on a weight-loss mission and shed over 40kg. This is why I appear much different in more recent photos in my fishing reports and other feature articles.

• No need to head into the remote areas as the trout will come to you;

• Look for barriers preventing the trout from migrating upstream;

• Think big. Don’t be afraid to tie on a massively long minnow, like a 10-12cm long Rapala or something similar as the trout can become aggressive when they pair up; and

• If you see evidence of trout spawning, such as gravel beds (redds) with mounds and depressions, do not step on them as you will crush the eggs that are sitting just under the surface. Think about heading to another waterway where the trout may not yet be spawning.