If there is one supreme family of fish it would have to be the Lutjanids. With a lineage that includes, red emperor, saddle tail snapper and mangrove jack, the Lutjanid family would be hands down one of the most popular target species for anglers in Australia and throughout the world.

However, when you cast your eyes over this impressive family of fish there is one particular member that stands head and shoulders above the rest – Lutjanus Johnii, or what is more commonly known as fingermark.

Lutjanus Johnii goes by many names and it has only been in the last decade that it has acquired the ‘golden snapper’ tag; its rebrand was designed to make it more appealing on the seafood retail market. Another name is ‘chopper’ due to the fish’s large piercing teeth, ‘big scale red’ because of its large scales and mangrove jack appearance, and finally ‘fingermark’ due to the large dark imprint on the top corner of its body.

Fingermark are also commonly snared in big numbers from the Pacific Islands, Asia and right through to African waters. On one of my last trips to Singapore I had the opportunity to wet a line with some local anglers who regularly target big fingermark on micro jigs in their local waters with huge success.

Unlike many of the other Lutjanid species, fingermark are not considered a coral reef fin fish and is categorised as an inshore estuarine species, even though it can be caught 30km+ offshore. Not dissimilar to their cousin, mangrove jack, fingermark can be targeted in creeks and rivers right through to offshore environments. However, unlike mangrove jack, size does not dictate when these fish move offshore. Fish up to 80cm can be regularly targeted in deep river systems from the Central Coast right through to the tip of Queensland and beyond. Smaller fish can also be found in deep offshore waters and are certainly not restrained from staying in the protected waters of creeks and rivers.

Not much is known about the motivations and movements of fingermark but one thing is for sure, they prefer to live in big schools. I have regularly seen schools of 100+ fish while free diving. These schools tend to include fish of similar size, which poses an interesting scenario for anglers as fingermark spots can often be classified into big fish spots or small fish spots. For example a particular spot I fish out of Cairns will only produce fish from 70cm upwards and these particular spots are very special. I call them goldmines as they only produce big trophy fish. 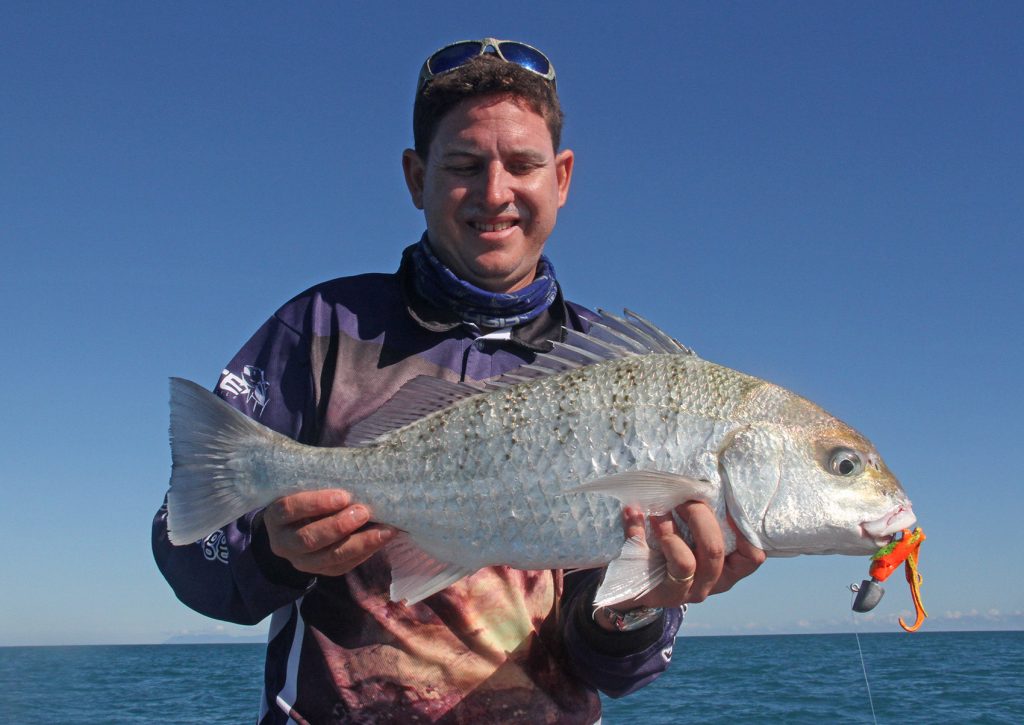 Grunter are a common by catch when targeting golden snapper. 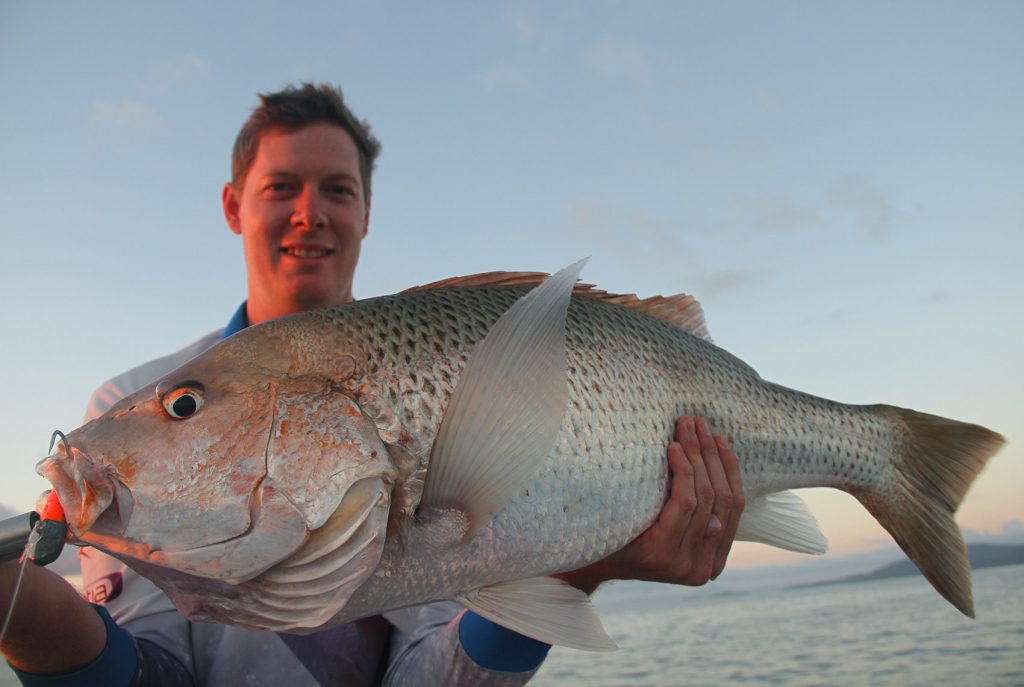 Matt Coxon with a trophy golden snared on a Berkley 7” jerk shad. Sometimes dead drifting big jerk shads can be more effective than working them through the water. 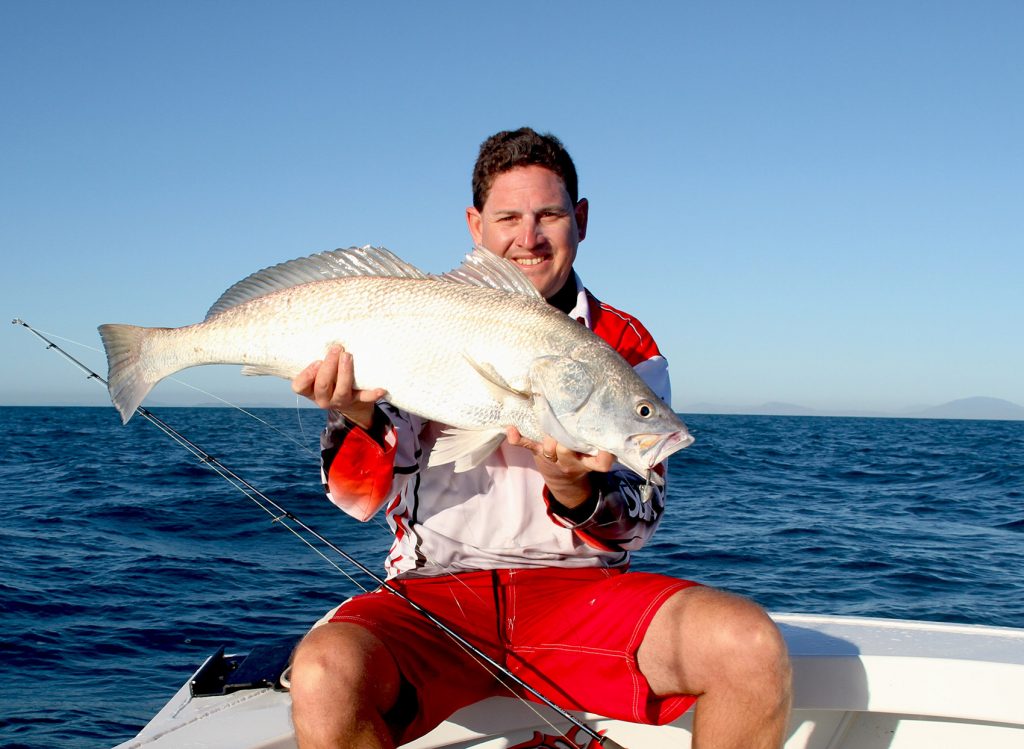 Black jew are also a common by-catch when chasing fingermark. 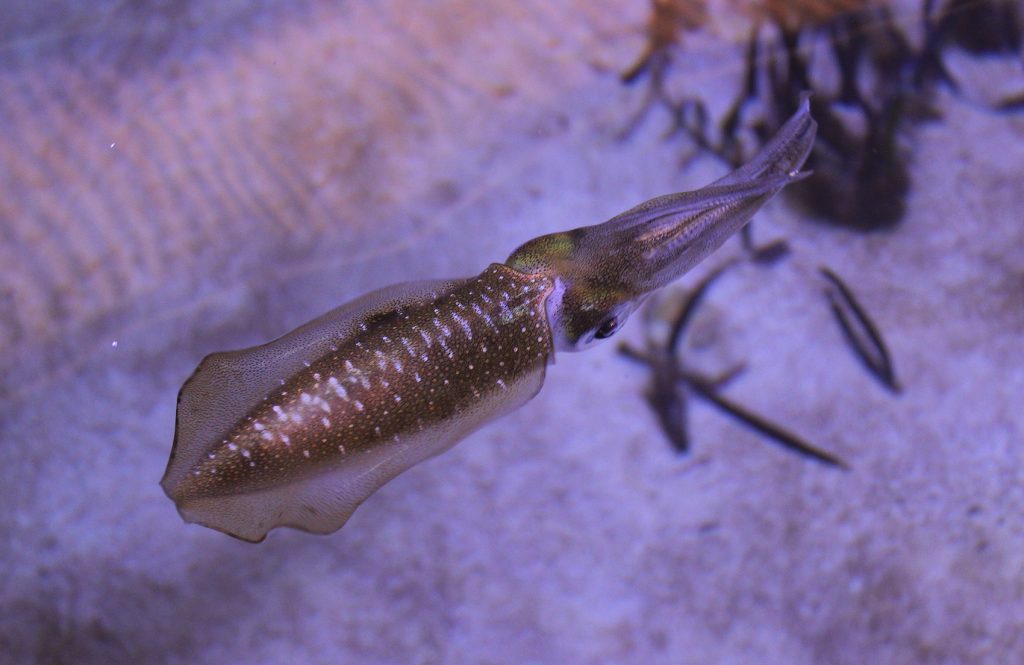 If plastics are not your thing, live squid are the best option if you want to use bait. 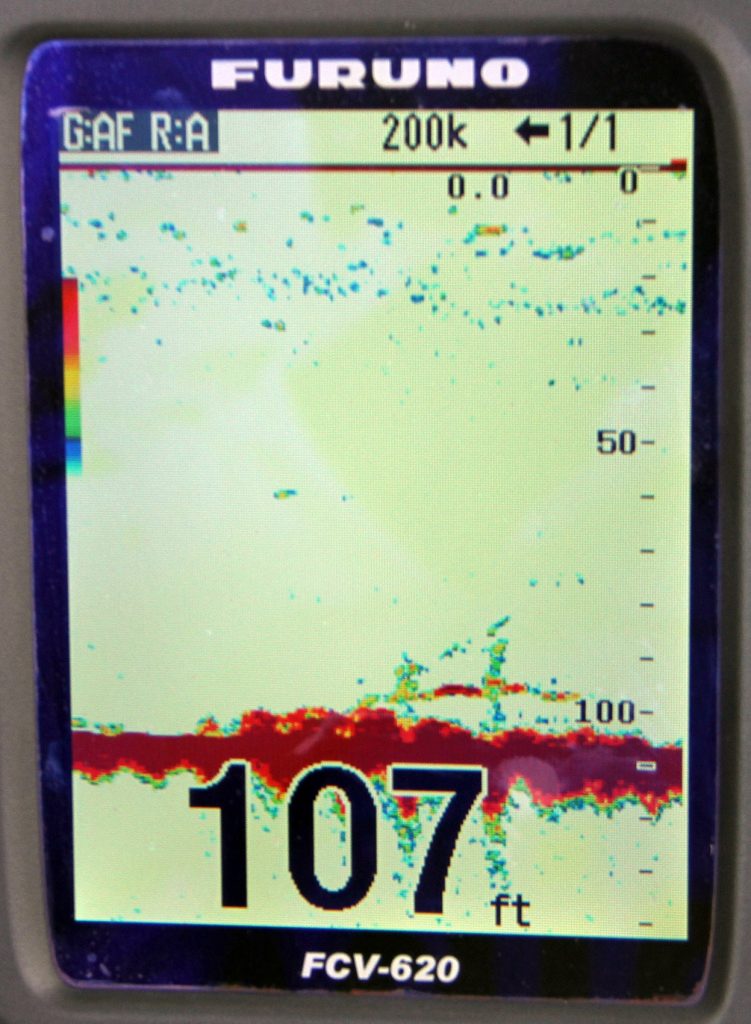 Small isolated rubble patches like this one presented here are the perfect ingredients for a gold mine. Take note of the green showings that represent bait and the red showings, which represent fish. Finding the structure is a good start but look for these signs as well. 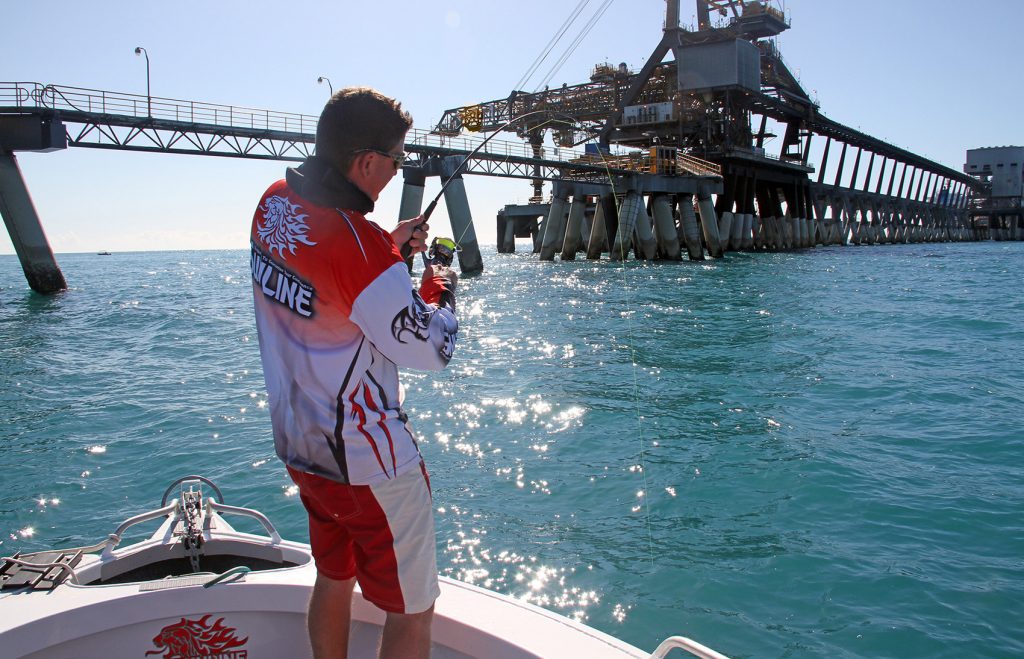 Artificial structures like jetties are great spots to try. Here the author is hooked up to a big fingermark that was hooked close to the pylons. When you hook up make sure you get out quick as these fish will punish you if they get the chance and know how to fight dirty. 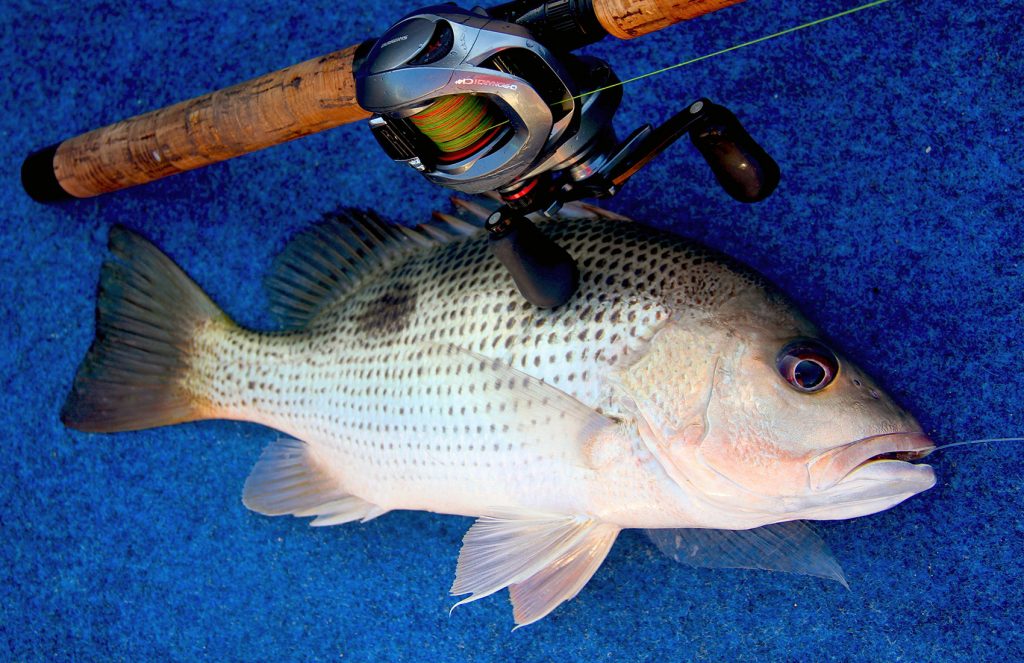 Fingermark are not just an offshore species, they can be taken fishing the same way for barra and jacks and will readily take lures and baits up creeks. 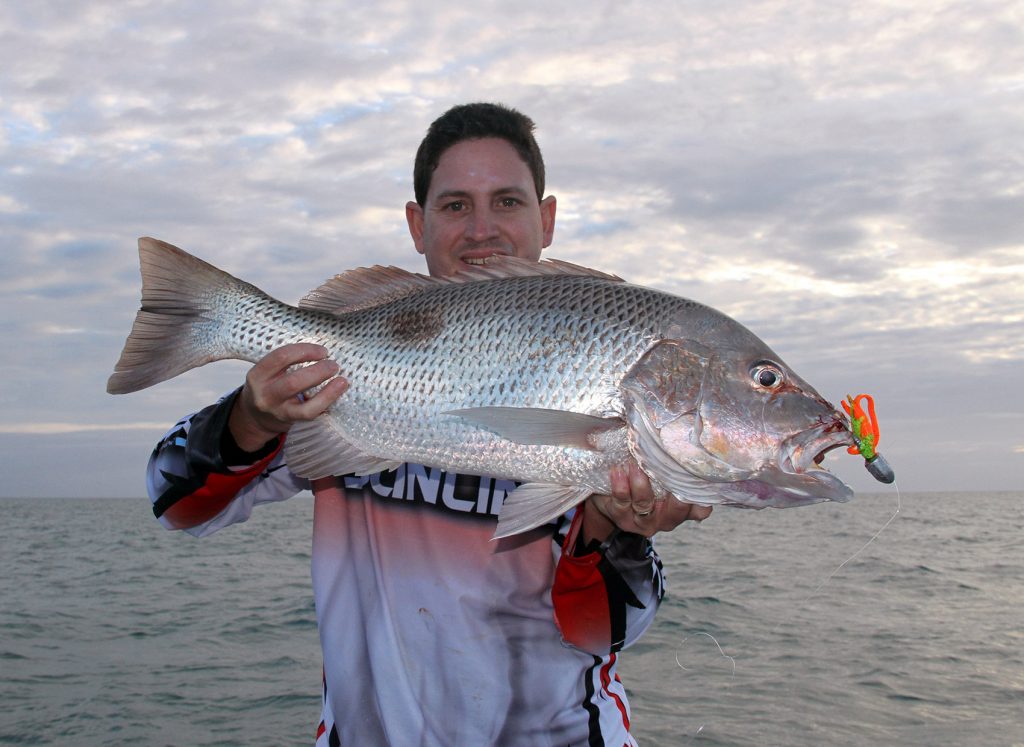 The author with his personal best fingermark caught on a soft plastic. This fish pushed over the metre mark, which is a rare capture at this size.

Finding goldmines is quite difficult so be prepared to put in the hours searching as they tend to be very isolated and very small in size, in regards to structure. Isolated rocks or rubble patches between 60-100ft of water are the best places, and a good starting point is predominant headlands that jut out into deep water.

These headlands offer three factors that can help identify fingermark country. Firstly, at some point they probably stretched out further, but after years of weathering and erosion, parts of the headland have fallen away leaving submerged isolated deep water structure. Secondly, deep water headlands can create sweeping currents that converge bait and create gutters and ledges that fingermark love to inhabit. Finally, the rocky bases of headlands create caves that fingermark love to hide in. A prime example of this is Kings Point in the Cairns area, which is a renowned big fingermark ground as it has all these three characteristics.

One effective strategy when exploring these areas is to start close to the headland and work your way out until you find changes in the bottom or, even better, isolated structure. Fingermark can also be found on wrecks, often the bigger fish will not inhabit the wreck structure itself but prefer to hang on smaller structure away from it. This way the fish will move in on the wreck when it is time to feed and then leave it when they have had their fill. This is important as many anglers will target the main structures of wrecks and overlook what may be surrounding them, which is often where the fish will be laying.

Deep water jetty structures are also a top spot to target fingermark. Spots like Abbot Point Jetty in Bowen and the Sugar Loading Jetty in Lucinda are both renowned for big fingermark if you can crack the pattern.

When targeting these deep water fingermark, soft plastics are your best option. Bouncing big jerk shads, grubs and squid style plastics in the bottom third of the water column is an effective method to get a bite. When the fish are a little finicky, dead bait your plastic particularly if you are using scented plastic. I have lost count on the amount of big goldens snared using a dead sticked plastic compared with one that is being jerked and twitched.

On occasion goldens will bite the soft plastic similar to bait and the angler is best to strike and set the hook. On other occasions they will slam you like a mangrove jack. Once they do hook up they will do their best to bury you in the structure below and have a very similar attitude to a mangrove jack.

When using soft plastics I prefer to use a 30-40lb Sunline FC Rock or FC 100 fluorocarbon leader. These fish are incredibly hard to fool so you need a top quality leader to provide the best presentation possible. You also want a leader that can take a tonne of punishment from what is essentially a fully loaded mangrove jack on steroids.

If you prefer fishing with bait then it needs to be either super fresh or live. Live squid is the ultimate bait for fingermark. Because of this, many bait anglers will only target goldens at night as it allows them to catch their squid fresh and then send them down below. The best way to catch squid at night is by attracting them to the boat using a light. The light initially attracts small baitfish that eventually entices the squid. Squid lights don’t have to be elaborate, I simply use a Styrofoam crab pot float with an underwater torch inserted into the centre hole. Once you attract them to the light you can either catch them with a long net or try and lure them with a squid jig.

An effective bait rig for chasing deepwater goldens is a running sinker onto an 8 or 9 circle hook. I prefer to use Wilson’s Octopus Circles for large squid or the Fine Wire Demon Circle Hooks for smaller squid. These hooks are yet to break on me yet compared to others, which I have used in the past. When rigging your live squid just slip the hook around 5cm from the arrow of the squid and send it back into the water as soon as possible. Try to use as little weight as possible bait at the same time you need to get your bait on the bottom.

Fingermark can also be targeted in shallow waters and creeks. The main areas to focus on are around deep holes or around the mouths of creeks. They are commonly targeted by anglers using vibe style lures or soft plastics fished along the bottom. Keep an eye out for rubble patches or small ledges as these fish don’t need much structure to school.

One technique, which I have not yet given enough attention, is trolling large hardbody lures. Big fingermark are commonly targeted in shallow water by trolling hardbody lures, particularly when fishing water less than 30ft. Fingermark, like all lutjanids, are highly aggressive and will smack a big lure put in the right spot. Trolling around headlands, isolated ledges or structure in shallow water is the best way to do this and can produce some very large fish.

Fingermark can be targeted all year round but bite the best in the warmer months between October and March. While they are not subject to the Coral Reef Fin Fish Closures they still spawn in a similar way to coral trout over the new moon in spring, which sees them ball up in huge numbers and become very hungry.

Other species that are commonly caught when chasing fingermark are black jew and grunter, so if you are hooking these fish you probably aren’t too far off the golden mark.

Fingermark are very slow growing and research by the Northern Territory DPI has shown that fish above 80cm are more than 20 years old and the majority of these big fish are females. Therefore it is very easy for anglers to wipe out spots if moderation is not shown. The other important factor is that fingermark caught in depths exceeding 8m will not survive release and therefore are not to be considered a catch and release option in these conditions. They are a special fish, taste superb and rightly deserve the top position in the Lutjanid family.