Right in the heart of the Melbourne CBD, Albert Park Lake is a unique fishery, and with a diameter of 5km there’s plenty of room to have a fish.

The lake holds good numbers of yellowbelly, which are one of my favourite fish to catch. There’s nothing like the thrill of waiting for an aggressive take of the lure, and the anticipation of the hook-up keeps me coming back for more! The last couple of sessions I’ve fished the lake, we managed to pull out a few perch in that mid 50cm range as well as a thumper going 60cm to the tip. Boy did that fish pull!

Albert Park Lake is also home to estuary perch and rainbow trout, and has a large number of both mirror and European carp. Carp are considered a pest in Australia, but they do have a reputation of making your rod buckle to the max. Carp make a great by-catch at times (especially when you’re not catching your target fish), because they are great fun on light gear. Just remember that by law you must not release them.

Only 3km from the heart of the city, Albert Park is popular for a range of activities like dog walking, jogging, cycling, sailing and rowing. Parking fees apply to all car parks and kerbside parking spaces within Albert Park. Time restrictions and ticket requirements are shown on parking signs within the park.

However, public transport is a great way to get around because it is very easy. The Yarra Trams route 96 to St Kilda Beach stops next to Southern Cross station for people catching trains, and then stops right next to Albert Park Lake so getting there is very easy.

Vessels such as powerboats, kayaks and canoes are not allowed. 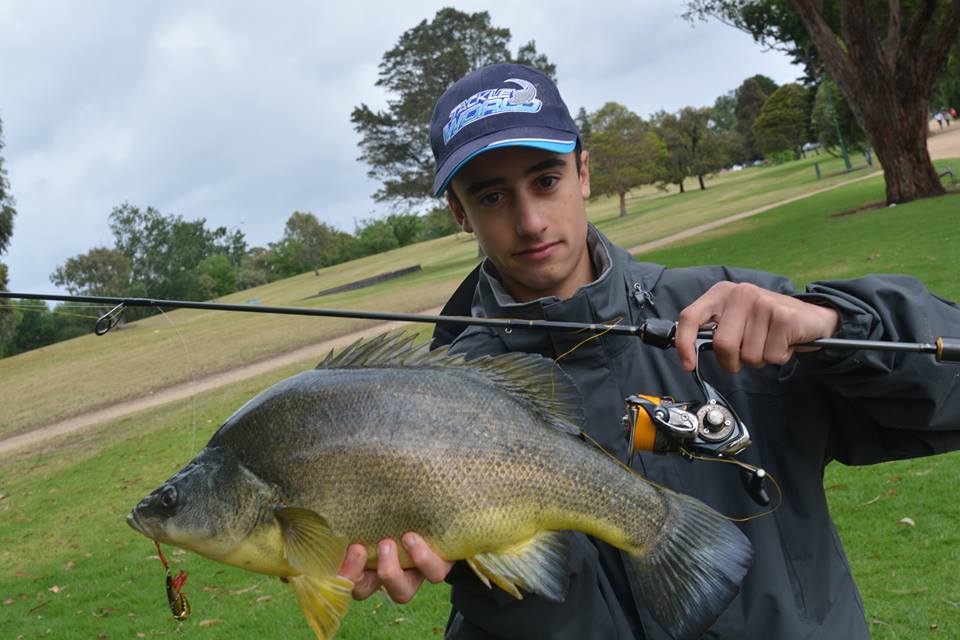 A fine example of a Melbourne golden perch. 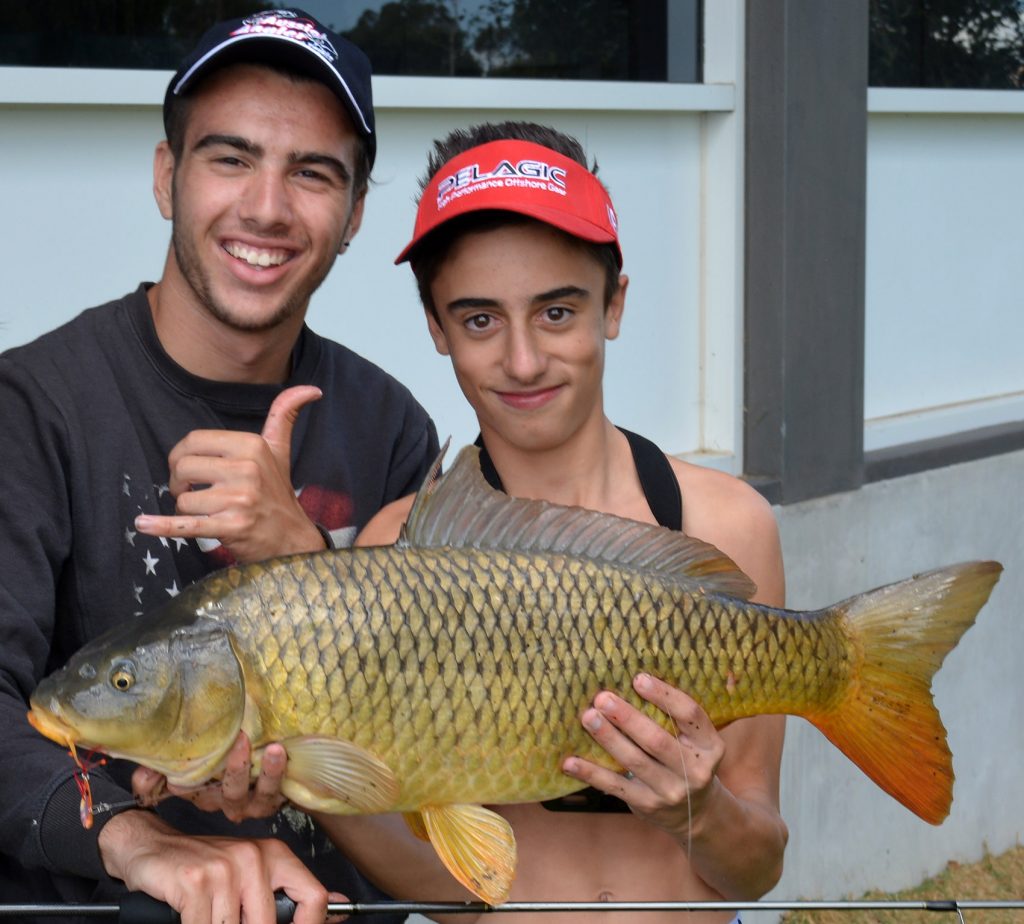 Jason Tanti and Jake Micallef with a 72cm European carp. Lure-munching carp of this size are common in the lake. 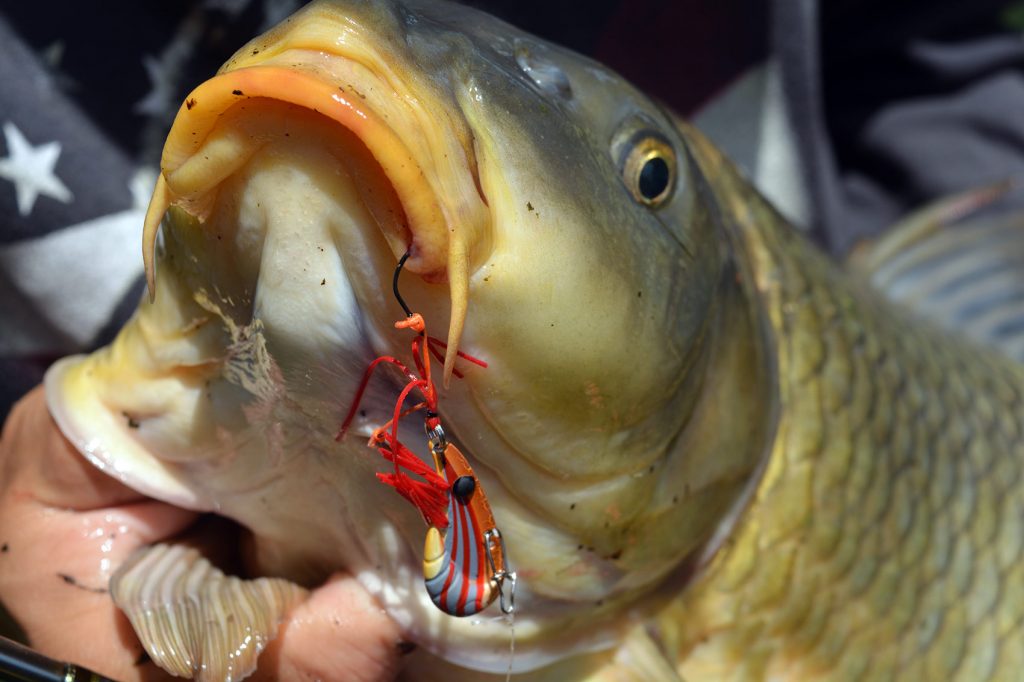 A fat European carp from Albert Park Lake caught on an Ecogear ZX40.

One thing that many anglers love doing is catching fish on light gear. A light 1-3kg, or even 2-4kg rod matched with a size 1000-2500 reel is the most appropriate when fishing at Albert Park Lake.

When casting lures braided line is a must, for the simple fact you can cast further and feel exactly what your lure’s doing.

When it comes to picking out a leader to tie onto your braid, fluorocarbon leader works best, because it absorbs little water, it sinks and it also has a refractive index, so it doesn’t reflect off the sun making it difficult for fish to see. The leader is also more abrasion resistant and it has a low level of stretch, however is more expensive than standard monofilament leader. Overall the most effective strength of braided line and leader is 6-10lb when targeting Albert Park fish.

The lake on average is 1-2m, deep which is quite shallow. There is thick weed that covers most off the water column therefore picking lures that won’t dive to deep is your best option. I’ve found when targeting carp on lures, the Ecogear ZX Blade is by far the most effective hardbodied lure when it comes to an all-round lure. It represents a shrimp so straight away you think of species such as bream and flathead, although the action that it demonstrates on a slow to medium retrieve is a lolly for any fish.

Keeping your rod tip that little bit higher then what you would normally will definitely keep your lure in the strike zone for a lot longer.

For anglers who prefer to fish with bait, the most popular choices here are lightly weighted worms and corn kernels.

When fishing Albert Park Lake most common target species is yellowbelly, and the only native species in the lake. Golden perch won’t come to you – you will need to get out and find them. Cover some ground and walk the banks to find places that yellowbelly may feed or use as a form of cover and protection. Pontoons, fallen trees, and deep drop-offs are the places you should start.

Over the past couple of years I’ve found golden perch fish quite well in Albert Park from the months of November all the way up until about March. I like to fish for them in early morning and late afternoon in low light as they feed and become active.

If the yellowbelly fishing is a bit slow, the alternative fish to target at the lake is carp. Fishing early morning and late afternoon is the best time to target them. As is often the case when carp are feeding, you will see them cruising on the surface, and this means you can sight-cast to them. What’s not to love about that?

Albert Park Lake is a great option to those not wanting to travel huge distances to scratch their fishing itch. And if the fish don’t cooperate at Albert Park, you can catch a short 5-minute tram straight to St Kilda Beach. Here I’ve caught good numbers of both pinkies and flathead, all on soft plastics. They seem to feed best when we get a southerly wind the night before, as this pushes the system and the fish down to St Kilda. I’ve had a lot of fun using light gear to catch both of these species. They fight well above their weight and are a great table fish as well. A light 1-3kg or 2-4kg rod with a 1000-2500 sized reel is perfect. Braided line is a must, for the added sensitivity.

So when you get your next opportunity, make sure to get down to the heart of Melbourne and get onto some cracking fish!

by Jarrod Day • On any given day, rain, hail or shine you only have take a glimpse at any pier or jetty around the coastline of the Bay and one, two maybe more anglers […]