As the days get shorter and the air begins to cool, Victorian and many other anglers find themselves eagerly awaiting the arrival of huge schools of southern bluefin tuna on the coast of Victoria.

From what was a pipe dream several years ago is now a flourishing fishery and a multi-million dollar business, that has seen a lot of anglers purchasing bigger boats that are capable of fishing in the often rough conditions of the west coast where the tuna love to migrate through each season.

The other great thing about the Victorian tuna fishery is the access to large schools of ‘school-sized’ tuna in the 10-25kg size, which are generally in big numbers out on the edge of the continental shelf. However as an added bonus there is also the jumbo tuna that will often mix with them, or move away on their own to feed and migrate.

One of the best things about these really big tuna, which are generally in the 80-120kg size, is that they love to travel in shallow water, with the 40-60m depths being a real highway for them. This in turn enables anglers in trailer boats to be in with a genuine chance of a giant fish.

People often ask what makes bluefin attracted to these areas of the west coast and the rugged southern ocean. The answer is quite simply that the cooler waters of this part of the world are just so nutrient-rich, that it creates an abundant food chain, starting with the krill, which often sends part of the ocean brown in colour, to masses of pilchards, mackerel, cowanyoung and sauries, not to mention two of the tuna’s favourite foods, the red bait and the arrow squid, both of which are in ample supply in this part of the world.

Access to the bluefin is available out of several ports with the most popular being Portland on the far west coast. It boasts great launching facilities but a big protected harbour to access the edge of the shelf and big tuna aggregating areas such as the famous Horseshoe, which lies roughly 60km to the southwest. While this may seem like a long way from home, it’s a lot closer to the shelf than in further eastern ports such as Port Fairy and Warrnambool.

No matter what or where you choose to launch from, all the towns have ample accommodation on offer and the majority of which cater for fishers and boats.

Moving to the east locations such as Apollo Bay and Cape Otway are prime locations to find some jumbo tuna and also good numbers of school fish when the currents push along the coast. 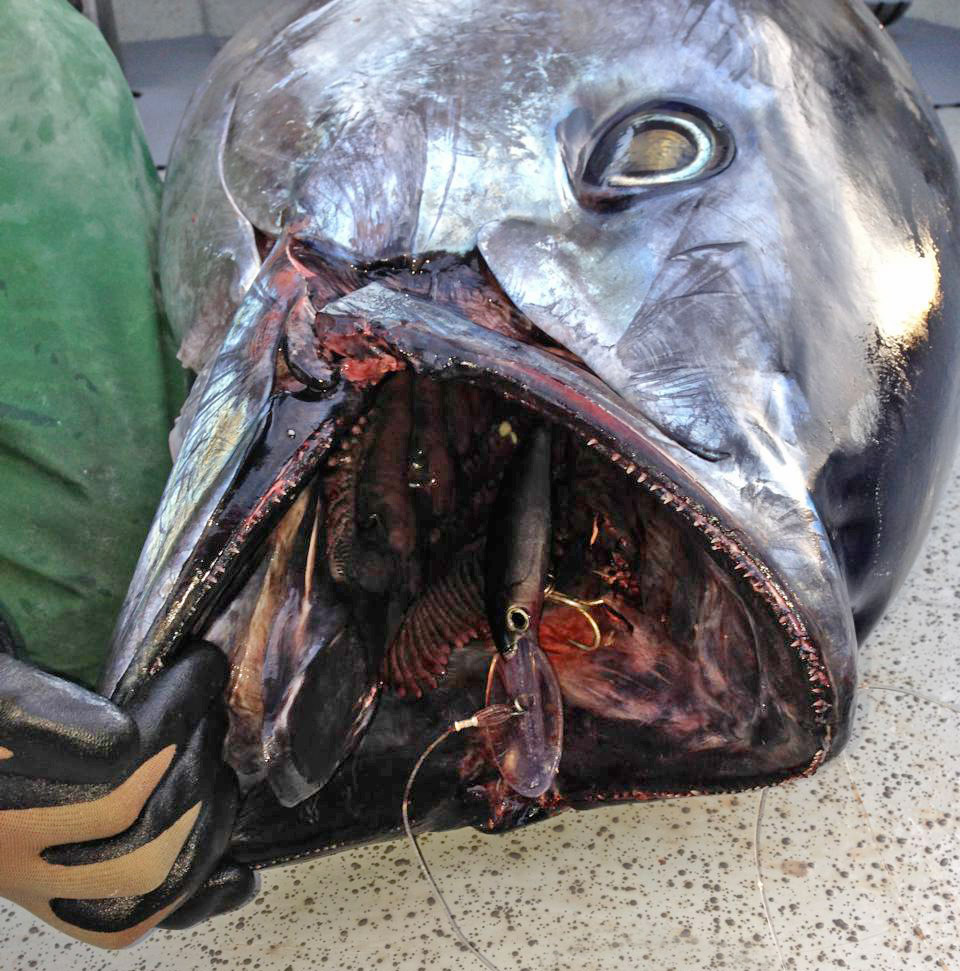 This is what it happens when a big tuna eats your X-Rap. 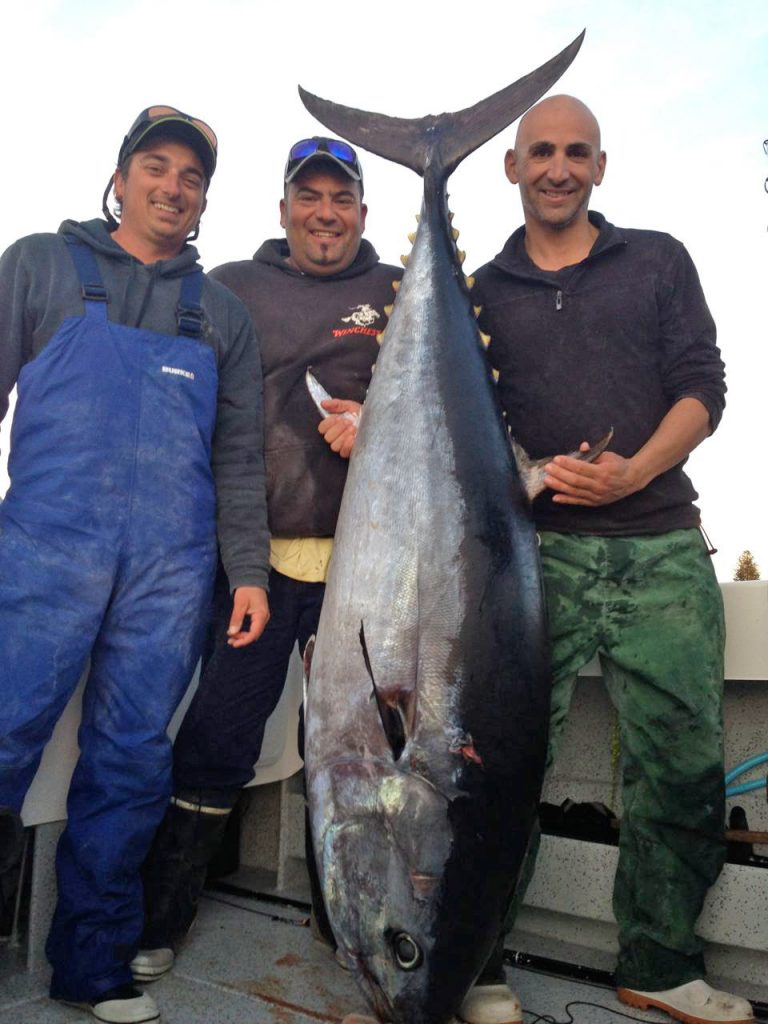 Lee, Kevin and Richie with a 116kg jumbo. This is what SBT fishing is all about! 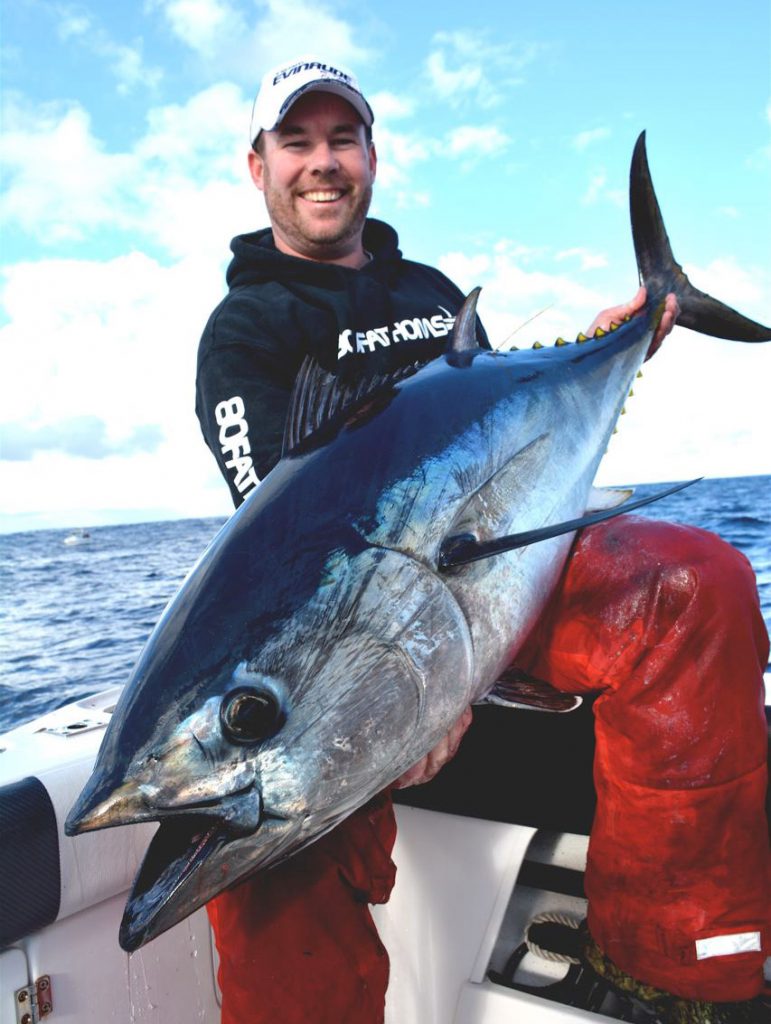 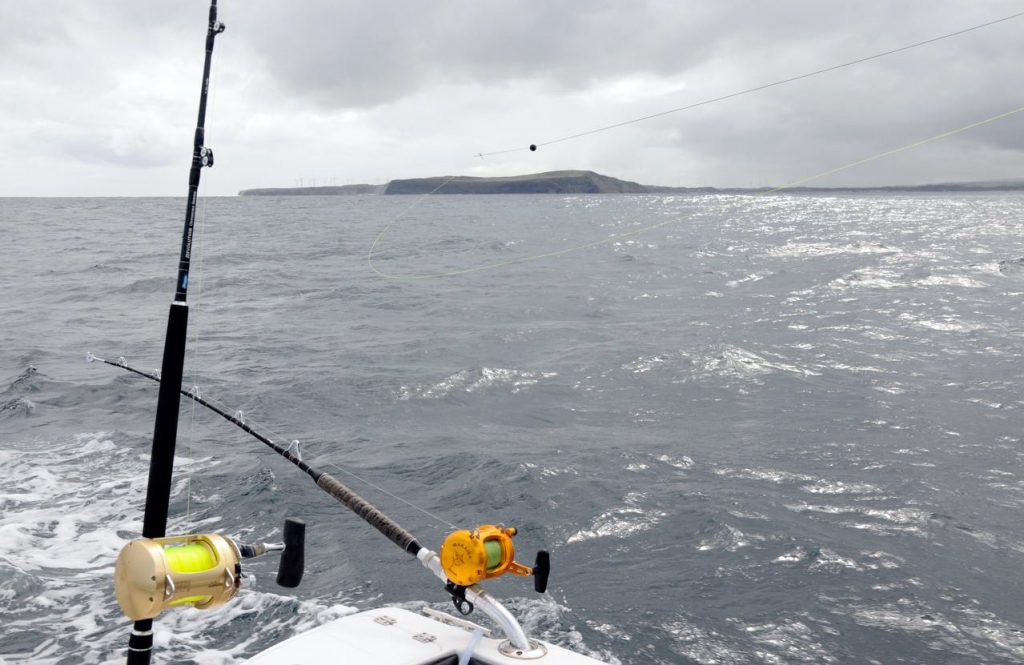 You don’t need to go far to catch some of the really big tuna.

Portland ramp on a busy morning. 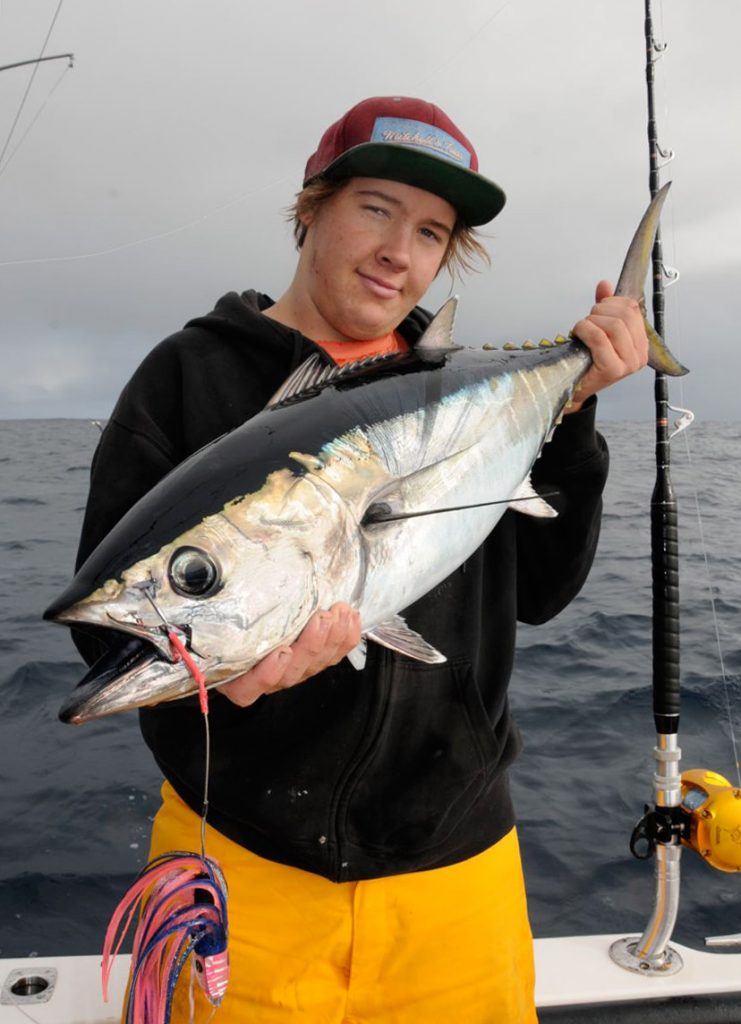 Christian Styles with a school sized bluefin on a Bullet Lure.

When it comes to catching southern bluefin tuna for the most part it really is a lure angler’s dream with diving minnows and skirts tackling the bulk of the fish each season. While a lot of the regular anglers will have their own preferences and favourite lures to run, for the most part a spread of 5-6 lures is a prefect number.

Starting with the shortest lures – referred to the short and long corners. This spot it generally taken up with the Rapala X-Rap Magnum 20 or 30 sizes in a range of colours, but the most popular being the SB, BTO, S and SBM colours.

Other good options are the River 2 Sea Killer vibes and the Halco Laser Pro 190 or the new Williamson Speed Pro – these lures run shallower and can handle plenty of speed, which are a good option on rough days.

Next up, if you have outriggers I recommend using them as they are so effective at getting those lures into clean water and I have found nearly all my bites on big tuna have come from these positions.

As for lure choices off the outriggers, there are so many to choose from. A few choice little numbers are the Marlin Magic Chopped Bullet, Black Bart Pelagic Breakfast and the JB Micro and small Dingos. For colours, lumo and evil are very good but I also love darker patterns such as petro, especially when the tuna are on arrow squid or yakka. I also have a great love of lures with pink in them as they tend to imitate the red bait in the area.

If we are running five rods then the final piece in the puzzle is the shotgun – this is the furthest lure back in the spread and is a killer on tuna of all sizes. For many anglers they run a rod out of the rocket launcher but I prefer to have a shotgun pole. It’s 8ft high, giving great lift to the long lure but also enabling you to run the rod out of the gunnel, rather than having to get a screaming outfit from above your head with a fish hooked up.

Most of the lures anglers’ troll are in the 4-8” size, but try pulling some slightly larger lures in the 9-12” size. The bigger tuna are often feeding on bigger bait such as arrow squid, cowanyoung and slimy mackerel, so have no qualms about eating a bigger lure.

• When targeting the SBT make sure you work the tide changes as they will often be more active at these times.

• Choose lures that have UV colouring in them, as tuna are attracted to this.

• If you get a bite, continue to troll for a 100m or so and you could turn it into multiple hook ups.

As an added bonus we now have the East Coast bluefin bite to contend with at the latter end of the season. While the south coast of NSW has been the place to be over the past years, we now have great ocean access on the east coast of Victoria at Mallacoota with the newly built ramp at Bastion Point.

Fingers-crossed this will enable anglers to get stuck into the 40-70kg fish, which we seem to miss out on over at the west coast.

Grab your jumper and wet weather gear and get ready because tuna season is just around the corner.

It’s time for an epic swordfight

by Lee Rayner • A few years ago if someone said you could catch a swordfish in daylight hours, you would have thought they were on the crazy pills, but that was quickly changed when […]

The scoop on Southern bluefin tuna

by Andy Smith • By the time March comes around, anglers have the game gear rigged, the boat given a once-over for offshore use and an eye on the early season tuna reports around the […]

Break out the sea gars: catching garfish for food and bait

October 24, 2017 Editor F-L, Garfish, Saltwater, Species Comments Off on Break out the sea gars: catching garfish for food and bait

by Lee Rayner • What could be better than spending a few hours fishing for a species that is abundant, relatively easy to catch and offers some of the best bait and food going around? […]