It’s that time of the year again when the mornings have a cool crisp feel to them. For me, it used to be a frustrating time of the year as I was a barra nut and back then I knew it was ending for the season. I must admit, I do love my barra, and salty barra were once thought hard to catch when the temperatures drop.

Fast forward quite a few years and it is no longer an issue. Cooler water definitely makes them harder to catch but certainly not impossible, and when you finally do catch one in cooler water you really earn that fish. Water temperatures as low as 18°C have yielded metre barra, which is quite out of normal for North Queensland and the territory, but down here in South East Queensland, the mid-winter temperatures can drop right down.

In May the water temperatures usually drop only a degree or so, and it’s not so much of an issue. On top of this, the annual run of banana prawns is in full swing, so the big threadies and barra will be close by as prawns are their number one food source.

Try sounding through the deeper holes and banks in the Straits and look for schooled fish. Once you find them, drop prawn imitation lures in and work them slowly. The bite is usually quite subtle so you should strike at anything. Some of the smallest taps that could be a bream have turned out to be metre-plus threadies and barra for us!

Offshore, longtail tuna are at their best from February to May as the water cools off. Pre-Christmas fish are usually big but lack the numbers, but in autumn we see massive schools and some unbelievable fishing can be had. At this time of year, the tuna and mackerel will chase flying fish and gar, making them a viable target on stickbaits, which is a spectacular way to catch them.

Look for birds hovering and watch their flight path it will surprise you how quick they will fly following a school of tuna, cast in front of their flight path and try to create an intercept as the fish will be right below them, watch where the birds are looking as they will be watching the fish.

Another species that will start to appear as the temperatures drop will be snapper. Usually April will see the odd specimen appear, mostly smaller 2-4kg fish at first, then by late May the bigger specimens will show, with fish up to 6-7kg being noteworthy in Hervey Bay.

The usual baits of pilchards, mullet and any fish flesh will work, but soft plastics also take their fair share of fish too. Trolling deep diving hardbodies in the right circumstance will out fish both of these techniques at time, as this way you can cover more ground, especially if the fish are scattered.

I use 20lb braid exclusively on my snapper outfits. Sure, you can use lighter braid, but beware of XOS longtails and cobia around bait schools in late summer and sometimes in early winter. Believe me, 25kg of tuna on 12lb braid is no fun!

Leader is also important, and I’ll use around 1m of 30lb fluorocarbon for offshore work. Remember, it’s a depth thing, so maximise everything to help get that lure down. The less drag there is in the system with heavy line, the better your lure or bait will get down. 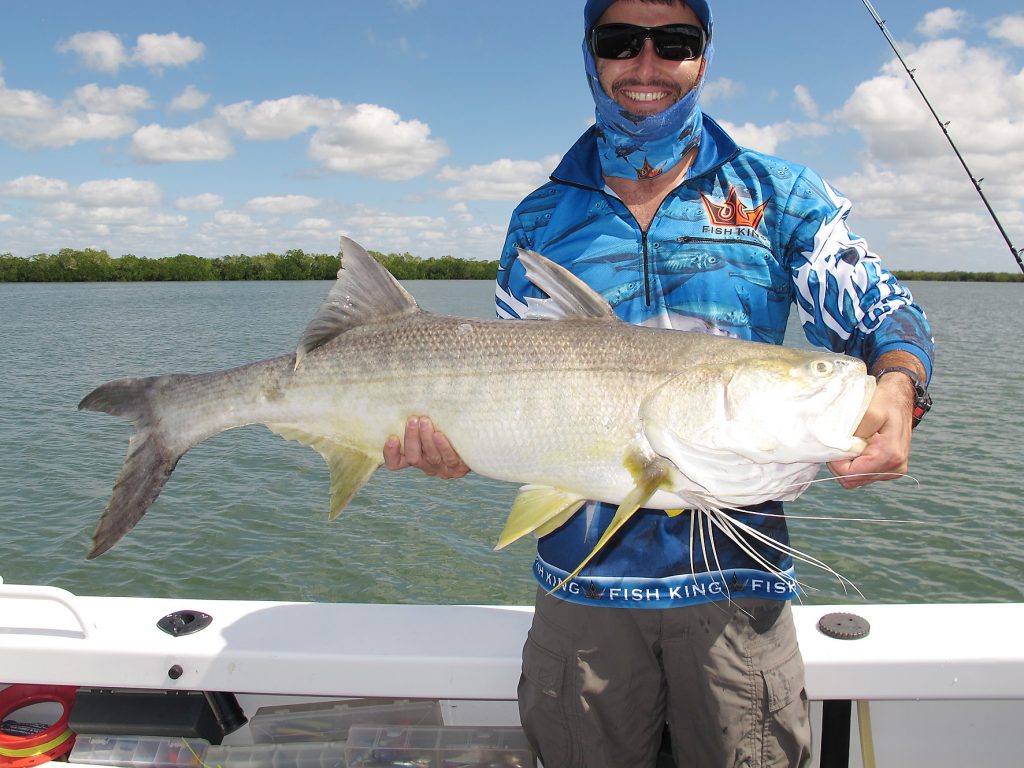 Kip Sayers with a big autumn thready taken from a reliable prawn hangout! 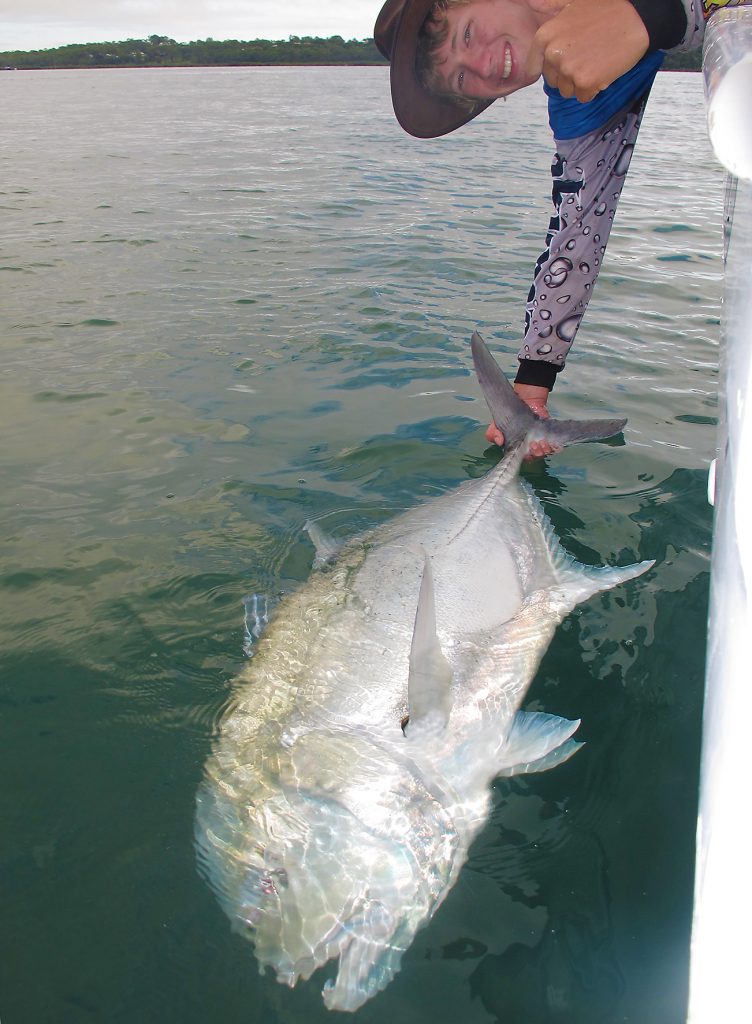 Although not usually found inshore in the cooler months, this GT was caught in the river in mild weather. 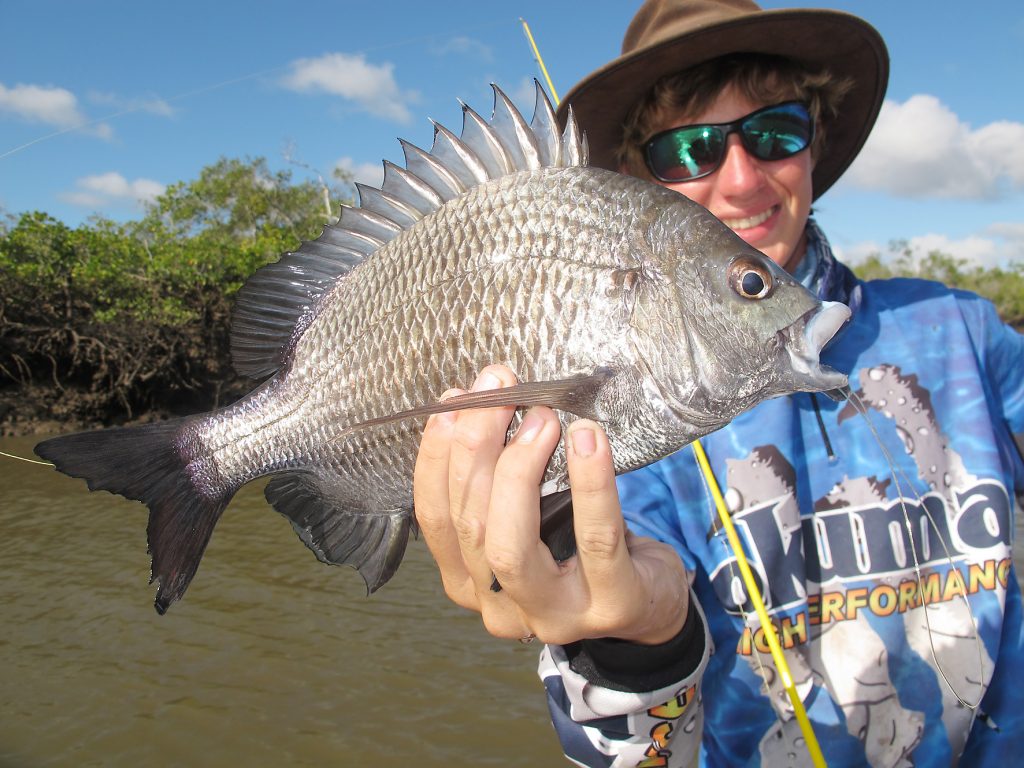 Jacko with a nice pikey bream taken while hiding up a creek from southerly winds.

Inshore the fishing can really shine, as bream start to school and spawn. Flathead also do a similar thing, but this usually happens in late winter. Whiting can come on strong as well, especially on the spring tides and the shallow flats can produce some good popper fishing, as they’re up on the flats chasing little prawns.

Another species that can turn it on as we transition into winter is the grunter. We started catching them on barra lures late season quite a few years ago, and once again the influx of prawns has really fired them up! Soft vibes are deadly, particularly when worked slow and deep. Some big ones over 70cm have been taken along the western side of the island and in the river mouth, and they can really put up a good fight and they taste great.

Autumn sees a slight change in wind direction from pretty much constant southeasterly winds to more southerly, and then as winter sets in the westerlies take over, which I absolutely dislike. I’m definitely a warm weather person. In Hervey Bay southerlies, especially 15 knots and more, the fishing can be tough. Southerlies are a hard wind to escape from unless you go down the Straits somewhere and into a secluded creek, but getting there can be tough in small boats. Strong westerlies aren’t much better in this part of the world.

Lastly, at this time of the year it pays to have a spare coat or sweater in the boat, as you never know when you will get a cold southerly breeze. Be prepared for all and you’ll stay comfortable.

June 5, 2020 Covid-19 has provided a challenge for small business right across the globe and we are certainly no different. Now with more clarity and restrictions eased, we are back guiding again full time. […]