Canberra is home to three urban waterways, all of which have been heavily stocked with golden perch. Lake Tuggeranong, Lake Ginninderra and Lake Burley Griffin all contain football-sized yellas, and because each lake is located right in the heart of Canberra, they are easily accessible and are bank and boat/
kayak friendly.

My favourite time of year to chase these fish is August because there are very few people out on the water, and if I do hook up, it is almost guaranteed that the fish will be above average size.

In this article I will outline the cool water tactics I use to target these fish in Canberra’s waterways. These techniques are also applicable to any medium-sized dam located in a cooler climate.

Lining certain sections of Canberra’s three major waterways are partially submerged reeds. These areas are often my first stop because there is always plenty of food clinging to the stems of the reeds. Even during the coldest days I can spot bait on the reeds, so it is the obvious choice to fish these areas. I know that if there is a golden in the vicinity, it will be high in the water column and actively hunting.

In these areas, a kayak/boat truly comes into its own because it is possible to creep almost into the reeds and still not spook the fish or the bait. I like to move in flush with the reeds and cast my lure parallel to the bank so that my lure lands just on the edge of the reeds. The fish usually sit in the reeds looking out, waiting for a baitfish or yabby to creep into open water. A lure sitting just out from the reeds mimics this situation.

Once my lure has hit the bottom, I twitch the lure on the spot for a few seconds. Whether it is a soft plastic, blade or vibe, I like to create some disturbance on the bottom to imitate a yabby trying to bury itself after venturing out from the reeds, or a dying baitfish flapping around puffing up dirt and sand. I have found that this disturbance is often more than enough to trigger a bite from a golden perch or large redfin.

If I haven’t had a bite by jigging the lure on the spot, I work the lure back to my position by hopping it up off the bottom almost to the surface before letting it sink back down again. I then allow a lengthy pause before repeating the process. It can take me a few minutes to complete a retrieve when fishing during the cooler months in Canberra because I like to give the fish plenty of time to have a good look at my lure.

Sometimes I won’t get a fish in the reeds, so I head to the overhangs and scattered branches, which are another common feature across each of Canberra’s urban lakes. I have caught a lot of goldens fishing overhangs which I wouldn’t describe as ‘heavy cover’, but are large enough to provide an ambush position. These fish aren’t necessarily as active as those sitting on the outskirts of weeds so a likely branch or overhang needs to be fished a little more aggressively. These areas are easily fished from bank and also from a boat or kayak.

I cast plastics right into the heart of an overhang. Sometimes this means skipping the plastic in or casting the plastic up in a wide arc and landing the lure in a gap between the twigs. I mostly use plastics when fishing these types of areas because they are effective but also cheap (I lose a lot of lures when skip casting into these gnarly bits of structure). Once the lure has hit the water, I start working it back to my position using a pronounced twitch and pause retrieve. I really work the lure in this context because I’m looking for a reaction bite, as the fish in these areas usually aren’t feeding at the same rate as those in the reeds.

When fishing in winter, a little bit of finesse goes a long way. I’m not just talking about the line and leader – you also need a subtle retrieve and smaller lures. When fishing the reeds I’ll drop to 4lb braid and 6lb leader, but if there isn’t a snag in sight on the edge of the reeds, I’ll drop my leader to 4lb.

Likewise, when jigging on the edge of a reed bank, I use quick, short jigs when working my lure on the spot, as opposed to the exaggerated jigs I put into a lure during the warmer months. Further, when hitting an overhang, I use a 2” plastic instead of a 3” or 4” model, partly because the small size suits the tighter snags, but also because it is more subtle and appeals to lethargic fish.

I use a Rovex Revenge 2-4kg spin rod matched to a Rovex Revenge 2000 sized spin reel. I bring two spools with me, each with a different line class, and I switch according to the situation. On one spool, I run 6lb braid and 8lb leader for fishing the twigs and overhangs, and on the other I run 4lb braid and 6lb leader for casting around the reeds. This combo is a good choice, as there is plenty of power in the butt and a decent amount of finesse in the tip for working plastics. It is also great for skip casting.

This combo works well for casting small surface offerings. In late autumn in Canberra, there can be a surface bite, as hungry reddies tidy up the first round of baitfish before spring really hits. These fish tend to stir up the system when hooked and send a lot of panic signals. The distress signals bring in golden perch, which can be readily targeted with a plastic fish under the school of surface feeders.

I always carry a second combo with me as I often quickly switch from small surface lures to plastics. I use a Quantum Synergy 2-4kg spin matched to a Quantum Smoke S15 reel in this context. 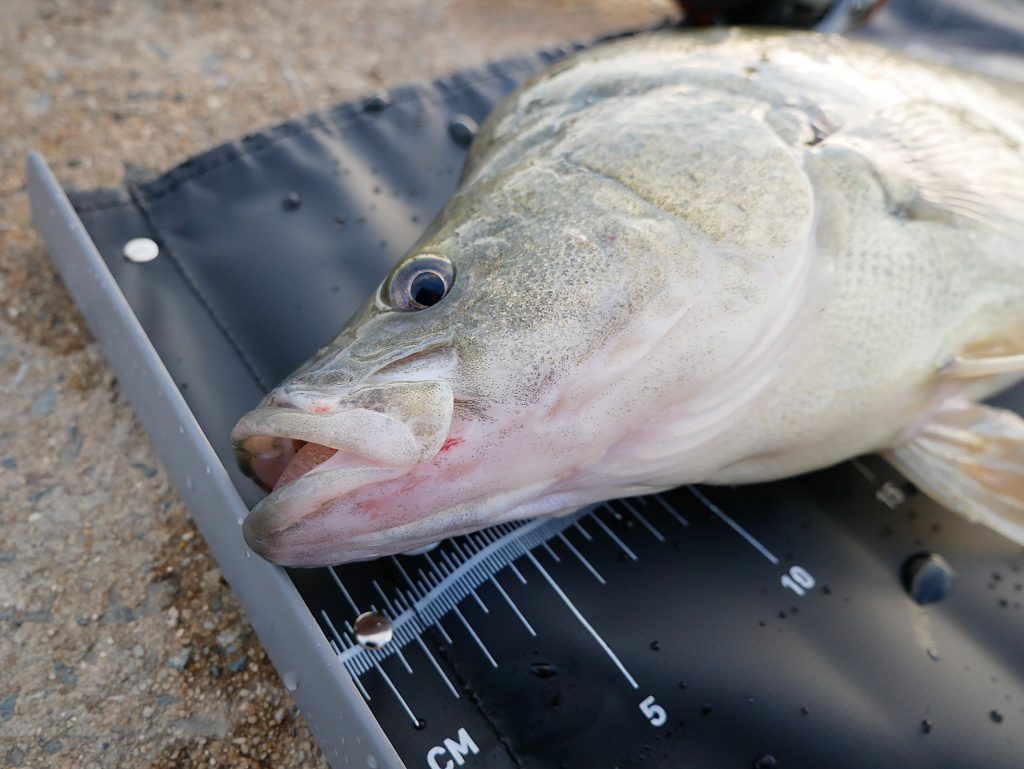 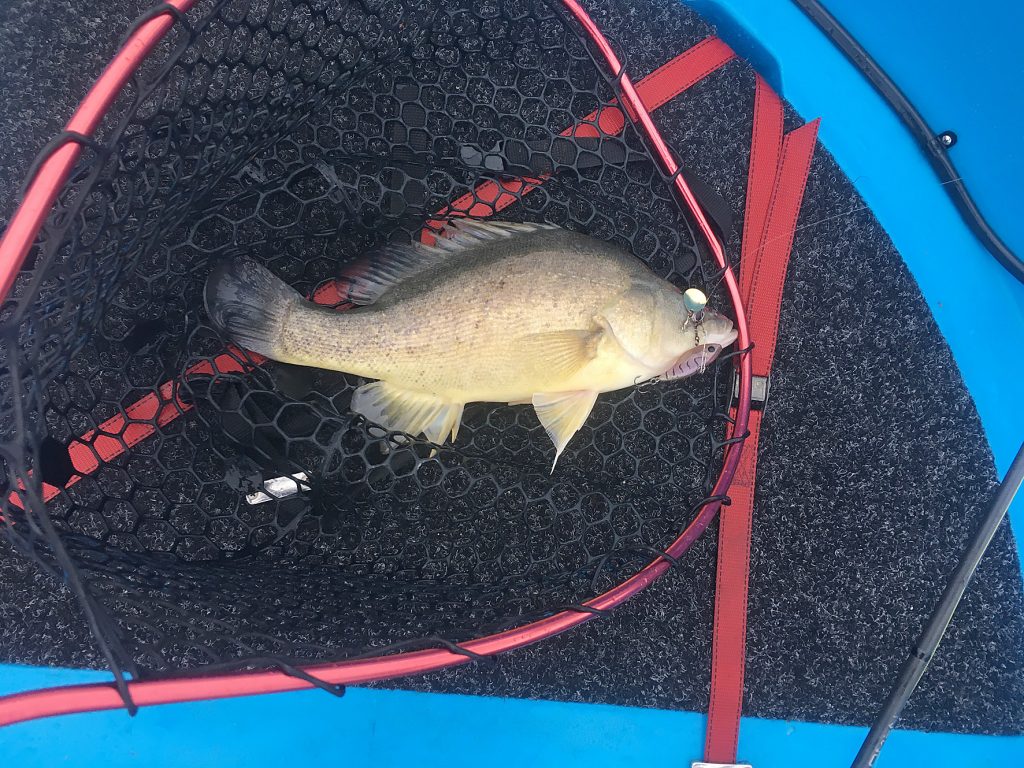 This yella was taken on a lipless crankbait rigged with a Colorado blade. 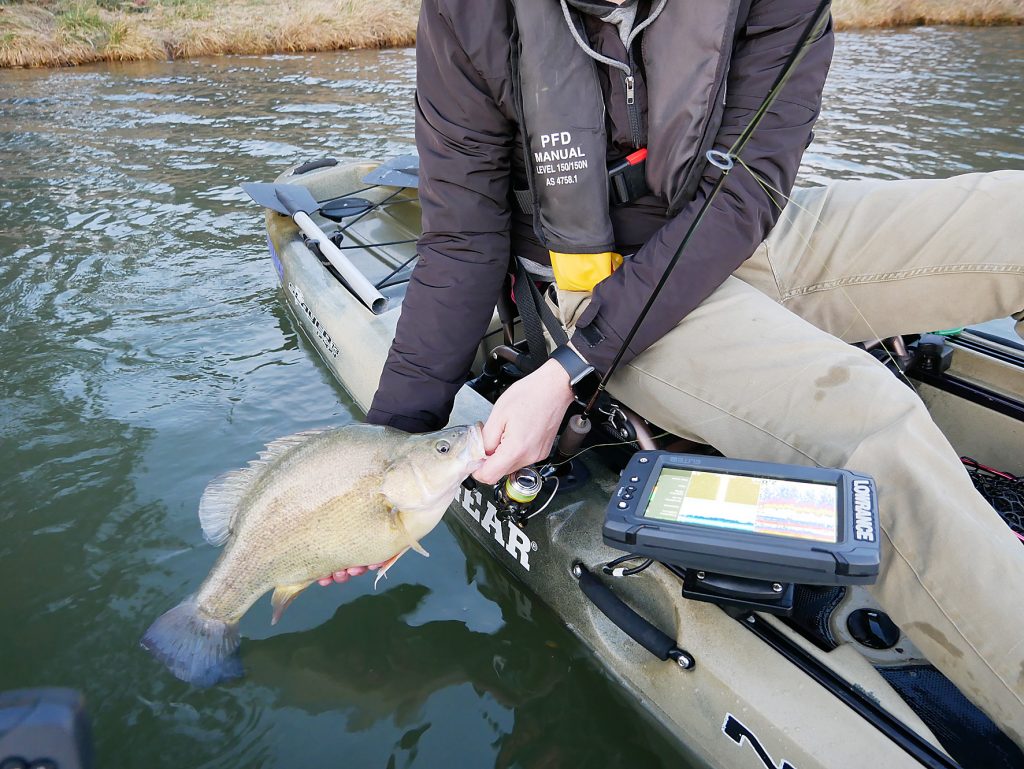 Sound around to find the weed pockets. 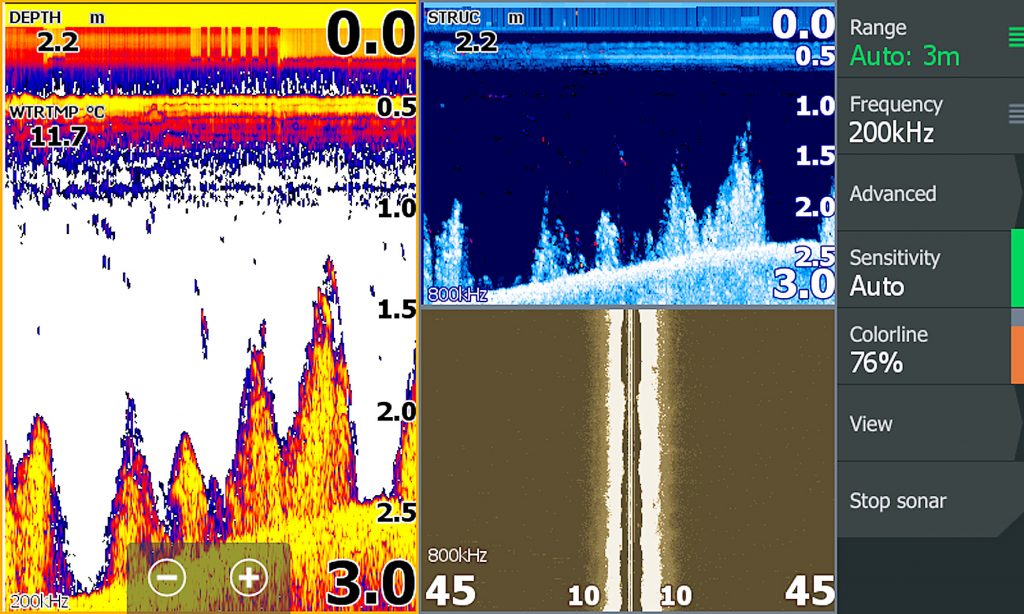 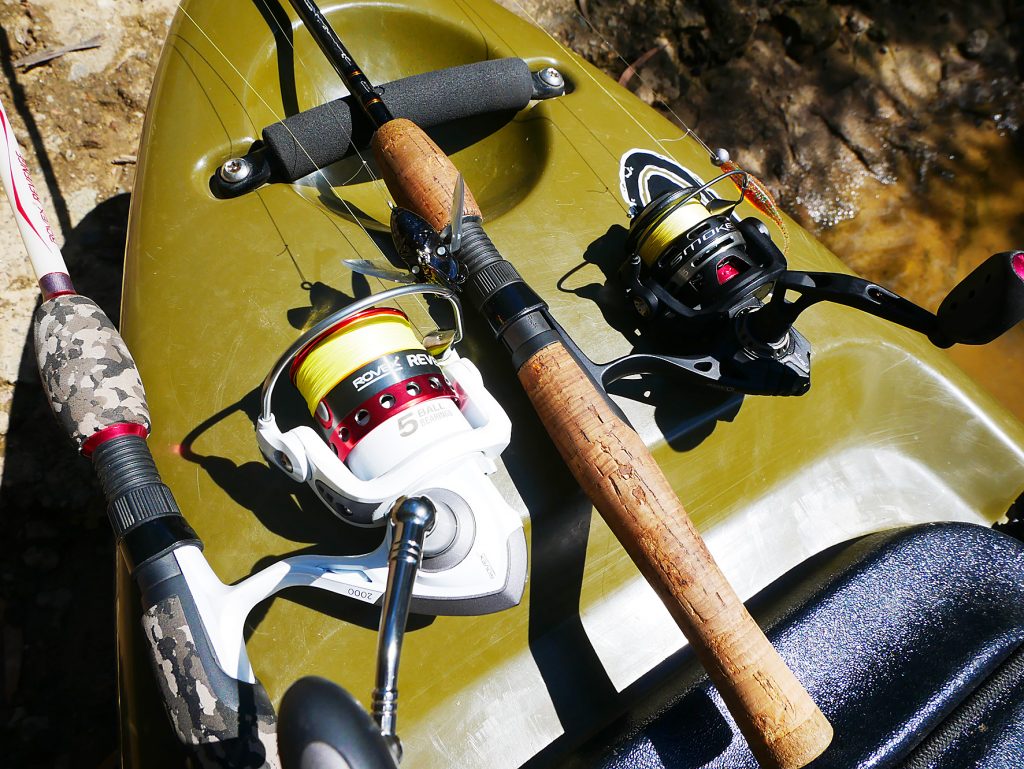 The author always brings two combos, one for casting small surface offerings and the other for working plastics. 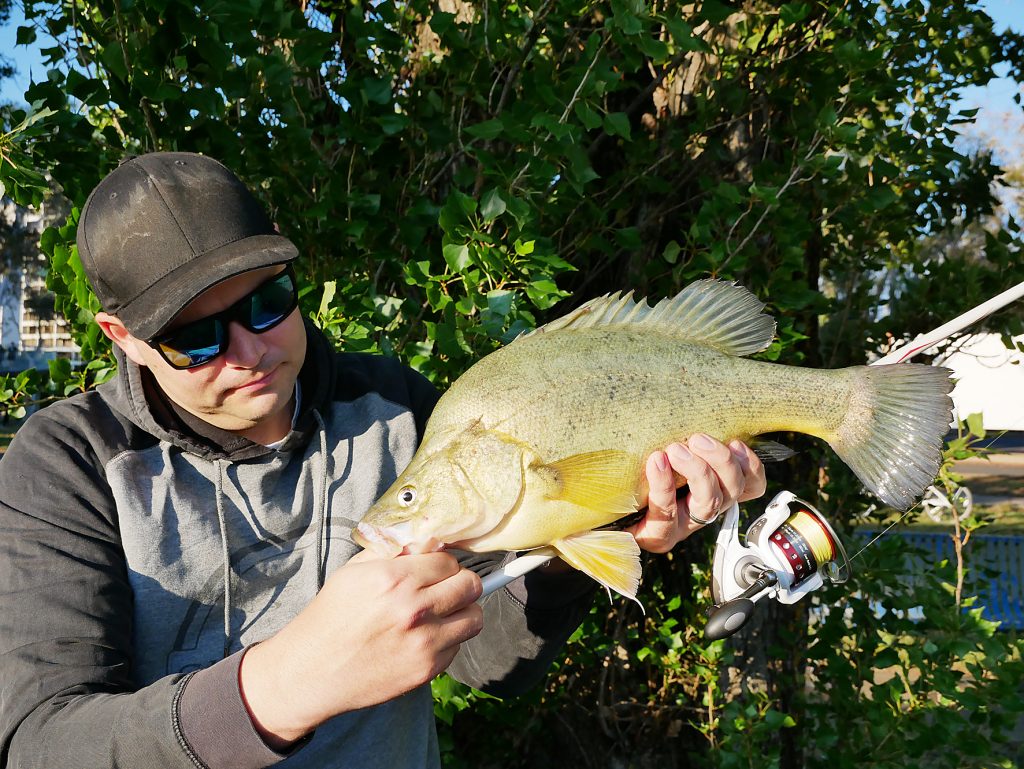 The author with a typical Canberra yella. 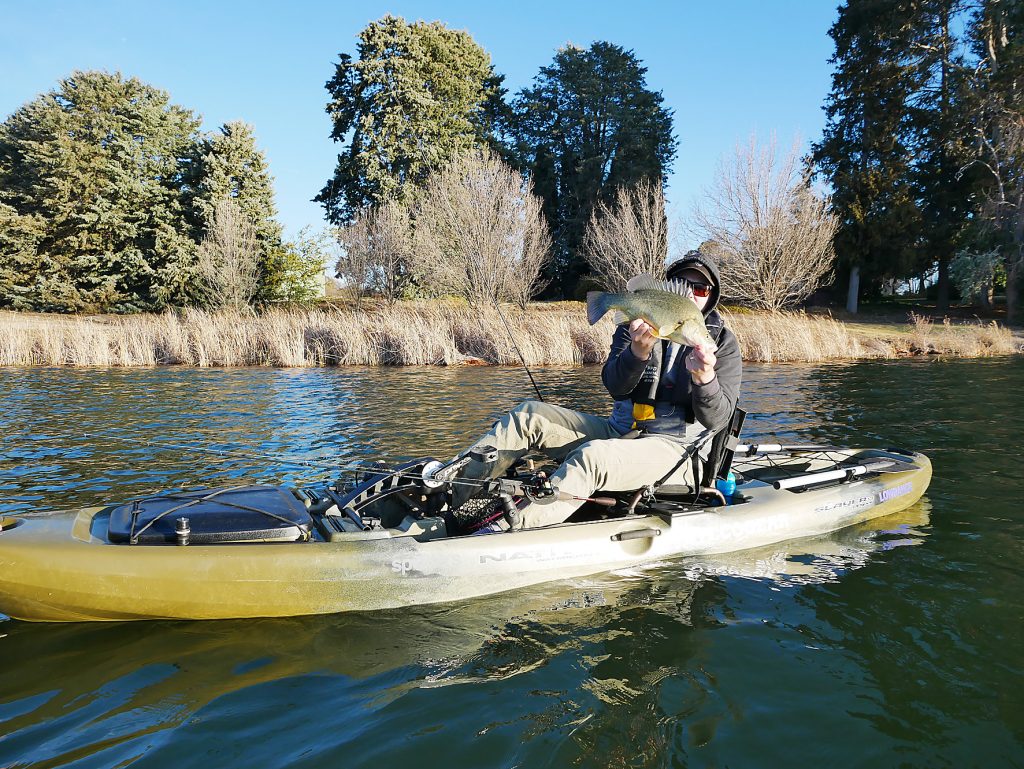 Hungry, active goldens can be found patrolling the reeds.

As mentioned previously, in winter I tend to use smaller lures, ones that match the hatch almost perfectly. My favourite session opener has to be the Ecogear ZX 35 in Dark Knight because it looks like a yabby, sinks quickly and, when jigged near the reeds, stirs the bottom due to its action.

The Strike Pro Enticer grub soft plastic matched to a 1/8oz jighead is perfect for casting into the overhangs, and its tail action is exceptional. Sometimes I’ll switch to a 1/16oz-sized jighead if the fish are particularly shut down and apply some Squidgie Wriggler scent to sweeten the deal.

I use jig spins throughout the cooler months but I have found they really come into their own in August. My favourite plastic to tie onto a jig spin is the Dragon Belly Fish Pro in bloodworm. This lure drives the goldens crazy, especially when paired with the flash of the blade on a jig spin.

For surface, I use small poppers and cicada-style imitations.

Dawn and dusk are the best times to chase these fish. I have caught a fair few yellas during the day, but I have caught the majority of my better fish targeting low light periods after clear, sunny days. I also prefer a bit of chop on the water, as it seems to make the fish less wary and more willing to strike.

There are certain images that will pop up on your sounder that you will see again and again across each Canberra waterway. Here in the capital, we have a weed issue that is especially prevalent in Lake Tuggeranong and Lake Ginninderra. There have been times when I have been working a reed-lined bank and have sounded undulating weed patches below me. They almost look like little peaks and troughs on the sounder. These are prime places to cast to if all else fails, and even if you don’t sound a fish on there, cast in anyway because golden perch can be sitting right in the middle of a large clump of weed.

I run a Lowrance Elite Series 7ti and it is a great little unit all all the bells and whistles. That said, any sounder is fine provided you can easily identify the sunken weed beds sitting off the reed lined banks.

Canberra’s urban waterways provide some exceptional golden perch fishing even in the heart of winter. The fish are there and will hit, provided you target the right areas and apply some finesse to your game. Catches of a dozen or more goldens are a distinct possibility, especially if you focus your efforts around low light
periods.

by Jamison Godfrey • As we move closer to the warmer months and fish availability becomes broader, there is an abundance of species to chase – and eat! This dish uses a selection of Tasmanian […]

Scoring sand whiting off the beach

by Gary Brown • Sand whiting (sillago ciliate) are a member of the family sillaginidae and are also be known as summer whiting, silver whiting and blue-nose whiting in NSW. They are readily found along […]

Urban breamin’ – welcome to the jungle

by Anthony Strati • With so many of us living in built-up areas these days, we’re presented with new challenges when trying to fish. Not only are there environmental pressures like re-claimed land and water […]