When you’re hopelessly addicted to catching fish, having a bad day on the water can leave you cranky and sulking for days. For all anglers there are times when fishing is not what it should be. Days when landing even one fish is a battle. On those occasions going home is almost a relief.

So how do you go about increasing your catch and breaking the ugly cycle of another fishless day? Here are a few ideas that work for me – hopefully they might be a starting point to create a few new innovations of your own.

Bad days for everyone

I think the first thing all of us have to accept is that we will always have the odd day when the fishing is just plain dead. Don’t be fooled into thinking other anglers never have a bad day out. We are all so very good at not talking about those fishless trips.

Even worse, a few anglers stretch the truth about the day’s events. For instance how often do you here this: “Naaa, I didn’t land a fish. But I had plenty of bites and bust off a huge one!” In reality, the day was in all probability spent without a single bite or hook-up.

So don’t be too hard on yourself for having blank days every now and then. In fact you are almost better off to expect these days to turn up occasionally, as this can add to the joy and surprise when you actually get a few.

Anyway, sometimes valuable lessons are learnt when not catching fish, and it pays to be observant. Maybe it was a falling barometer? Or did the water conditions, like colour, flow or temperature, change subtlety? Was there increased boat traffic around that spooked the fish? Or maybe the bright sunny conditions had fish shy and timid?

If you make yourself aware of these factors, then going home fishless is not such a waste. For starters it helps you better choose the days and conditions when you decide to fish next time.

After a succession of dud trips recently, I suddenly realised my fishing technique might need an overhaul. I could see plenty of fish but they wouldn’t surrender to my usual methods. I found myself contemplating all sorts of weird, wonderful and even desperate ideas about getting more fish connected to my line again.

On the very next trip, I started experimenting and the results shocked me. What’s more, I tried my ‘normal’ technique for a while and got nothing. Instead of persisting with my unsuccessful sinking lures, I tied on a small floating model and fished it with fast rips and long pauses. Over the next three days I had a ball and returned 54 bream.

Sometimes it takes a radical change from your usual game plan, to finally see your catch rates improve. The willingness to adopt this sort of approach is what divides average anglers from those who bend all the rules and tend to have the greater success. This philosophy of trial and error applies to every form of angling.

Now there are many variables that could conspire to produce a bad day out, but almost every time we blame the fact that the fish just aren’t there. Sometimes it’s a sad fact, that where we have chosen to fish is right where the elusive quarry has decided not to be.

The best way to overcome this is to move around and find the fish. Don’t put in long and idle hours waiting for the fish to come to you – seek them out and track them down. Don’t be fooled into thinking the fish will just turn up because you’ve caught them there before. All the very best anglers I’ve ever fished with are highly mobile and it’s one of the stand out features that I’ve noticed from all these gun anglers. They are extremely active and work hard to get results. That includes all forms of angling from flyfishing and lure casting to bait and surf fishing. If you want to catch a lot of fish, then keep moving.

Rules are made for breaking

If there is one thing I pride myself in, it is that I hate following trends. I even go to the extent of doing the opposite of what even the best anglers are currently up to.

Even years ago when I was baitfishing, I was always trying something different. For example, when fishing with sandworms, instead of using the ever-popular paternoster or running sinker rigs, I would tie two hooks directly to my line with a sinker on the bottom. In other words no droppers, just two long-shanked hooks sticking out at right angles from the main line.

When bream or mullet come along and grabbed the worm, these fish were always mouth or lip hooked. They could not inhale the hook deep down as the main line prevented it from being swallowed. I even reckon this sort of rig increased my hook-up rate because the fish tended to hook themselves. It’s also very easy to remove the hook and return fish that are hooked around the mouth area. I’d never release fish that were gill or gut hooked and what’s more I didn’t have to cut off and lose hooks. So, by thinking outside the square I found a way to minimise damage to fish before release and maximise my hook-up ratio. 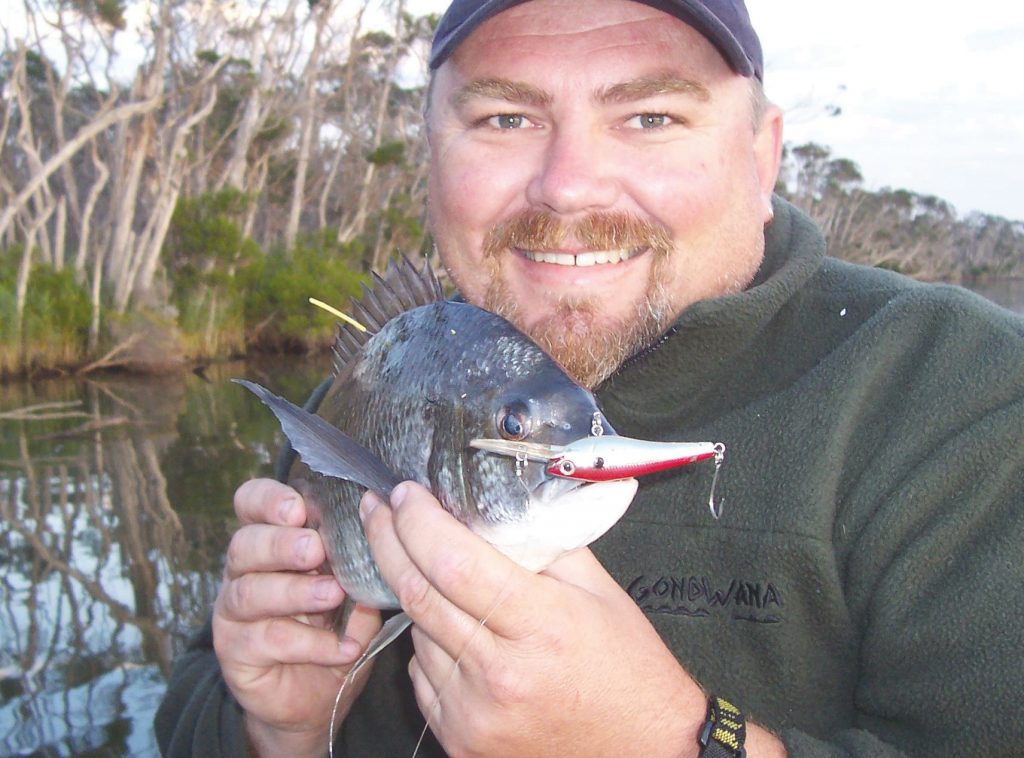 Bruce Robinson took the trebles off a Galaxia Minnow lure and replaced them with single hooks. It was a bold move that paid off nicely. 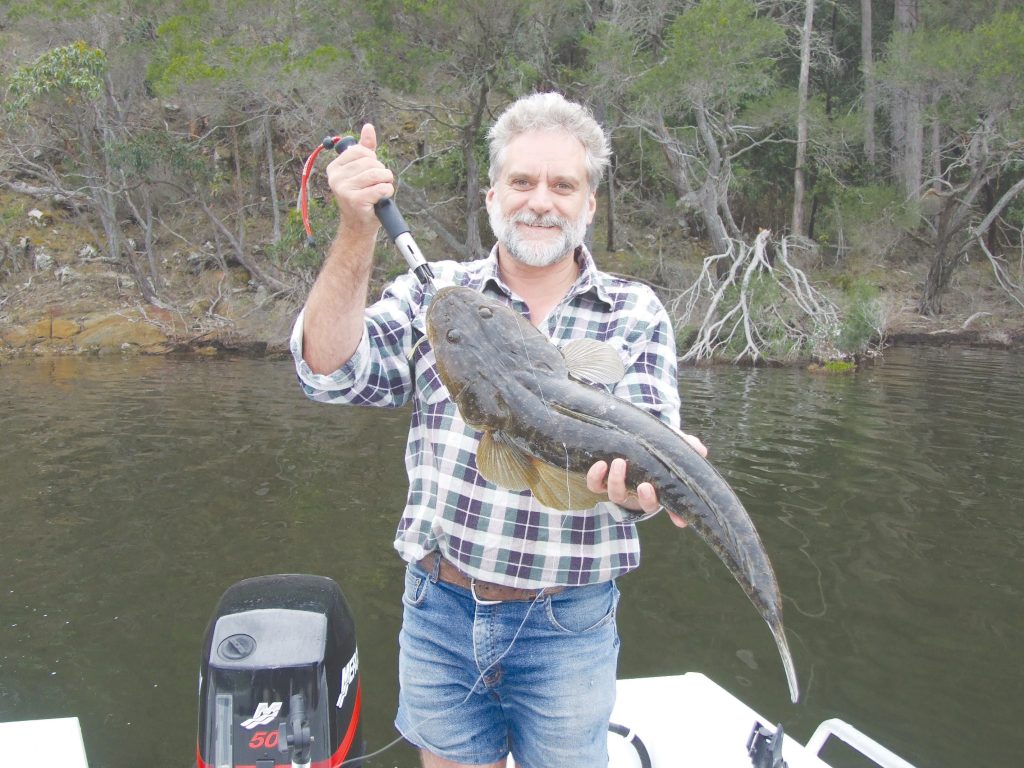 Flathead, like this 80cm fish caught by Neil Morrison, respond well to all types of lures. Can you discover another way to trick these great sportfish? 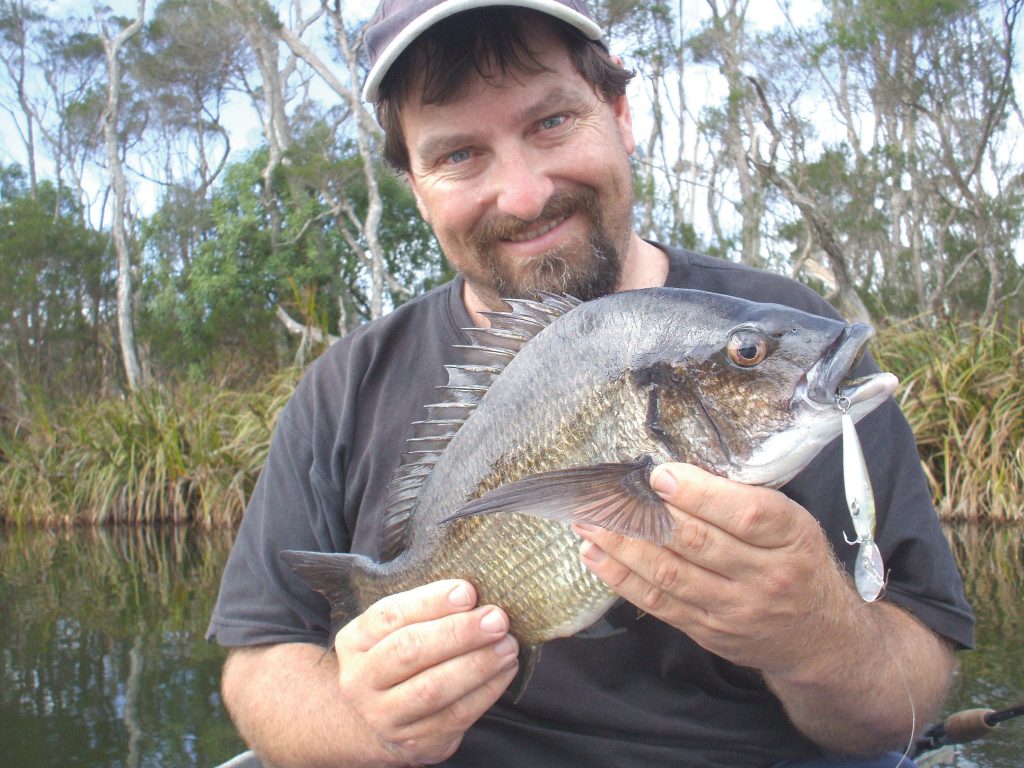 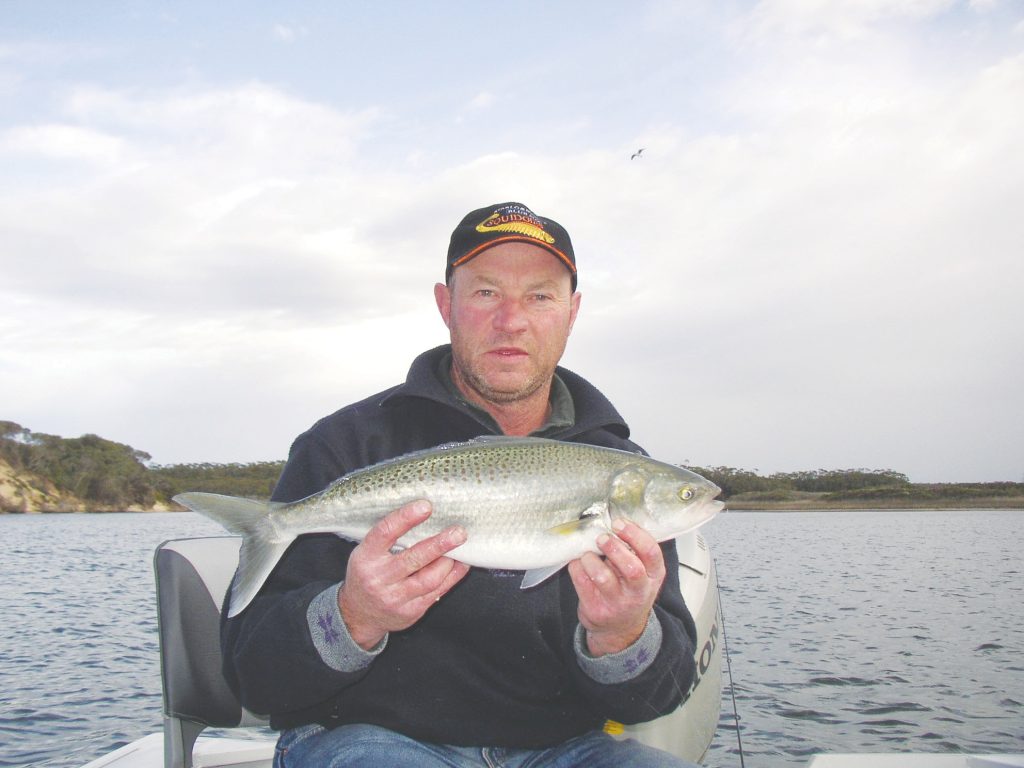 Salmon are usually easy to catch so they are a great species to test different methods on – like surface lures. 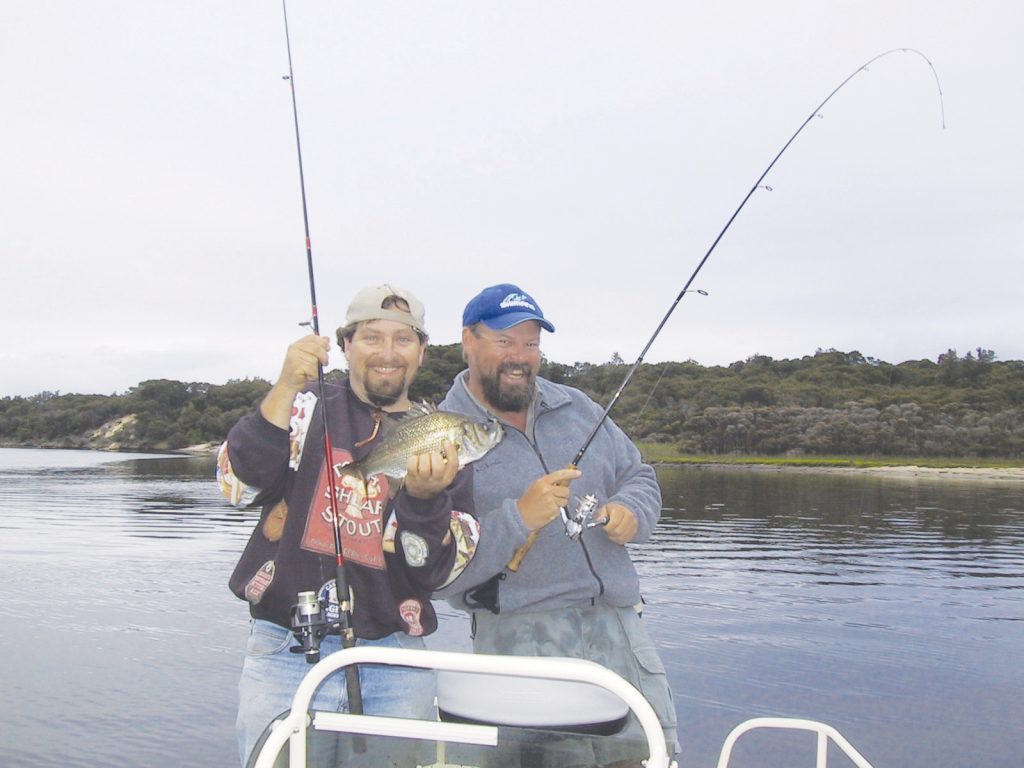 My very first cast with a soft plastic, many years ago, resulted in a nice perch. Thanks Steve!

Lure fishing is a constantly evolving and changing form of angling. I’m forever discovering new and interesting ways to trick those finned critters. Some changes are subtle like using a slightly different shape, colour or size of lure.

Other modifications I make are more radical – like making floating lures sink or getting soft plastics to float like a popper. My retrieve rates are always changing and just recently I have discovered how deadly jigging for fish can be. I sometimes drop lures down vertically right next to my boat, a method referred to as ‘tea bagging’. I slowly jiggle weighted lures down through the water alongside pylons or snags, and quite often I’ll see a big bream materialise from nowhere to snatch my lure right in front of my eyes! It’s great, heart stopping fun and another deadly method to add to my luring arsenal.

Yes, I enjoy doing things differently. But I’m not so stupid as to think my methods of fishing are the only ways, or the best. I’m always observing and learning from others, especially anglers who also experiment a lot.

Here’s a classic example. About eight years ago I had arranged to meet Steve Starling down at Bemm River, where I was keen to show him the great perch and bream fishing I’d discovered using my remodelled sinking hard-bodied lures. But Steve was also onto a new technique and right in the middle of discovering something really big – how deadly soft plastics are.

When we got on the water I proudly pulled out my secret hard-bodied weapon, while Starlo tied on this strange looking rubber thing. For the first 30 minutes I failed to touch a fish, while Steve pulled in perch, bream and flathead!

All the while he offered me one of his new soft plastic Bass Pro Shads to tie on. Eventually I succumbed, reluctantly removed my treasured lure and tied his offering on. My very first cast with these new plastic lures was slammed by an estuary perch – it’s fair to say my fishing life changed forever in that very instant. We went on to land a heap of fish for the morning in a session that blew all my previous luring ideas right out the window. My message is this – take note of those who boldly lead the way in discovery.

Time for a change?

So there are just a few ideas and examples of how you can turn your fishing success around. Don’t for one minute think that everything has been discovered when it comes to all the disciplines of fishing. If you are experiencing a bad run of fishless outings, break off the shackles and go radical!

Why not be experimental and try to discover something new yourself. If you make any breakthroughs, let me know!

by Robbie Alexander • Located in the North East Victorian hills at an altitude of 550m above sea level, Beechworth is one of Victoria’s prettiest towns. It has a lot of history, particularly surrounding the […]

The big bass bite back

by Brett Geddes • “I’m convinced that this liberation of bass is the greatest stocking success of native fish we have ever seen in this state.” This is what I said during my recent conversation […]

Are you reddy to go?

by Colby Lesko • Last year produced some great freshwater fishing for a variety of species across Victoria. The humble English perch was no exception, with a number of large redfin caught from a variety […]