Even if you don’t have a boat, you shouldn’t be deterred from going for a fish in Southern Sydney. There are so many land-based spots that it would take a lifetime to fish them all. Sure – some are better than others, but if you take the time to suss out each one you will start to work out the best times to fish them.

In this article I’m going to give you some good land-based spots that are worth a try, particularly during the warmer months.

This island is located on the northern side of the bay and is a very popular spot to fish for bream, whiting, luderick, tailor, Australian salmon, bonito, squid, groper and drummer throughout the year. Parking on the weekend can be a bit of a nightmare, but if you get there early you should get a spot. If not, you can park in one of the side streets and walk a few hundred metres.

You don’t have to fish off the actual island, as there are a number of spots on either side of the island where you can cast out onto a sandy bottom without the use of a rod any longer them 2.1m.

Located on the northwestern side of Botany Bay, the Cooks River entrance has parking on both sides. Bream, whiting, dusky flathead, silver trevally and luderick can be caught here in late spring and summer. The main fishing possies are at the ends of the walls, so it can get a bit crowded at times. Take care when fishing off the southern wall as it is fairly uneven, and you’ll need to find yourself a concrete block to either stand or sit on. It’s not much good in a southerly blow as it is fairly open.

This is easy to access by parking in one of a number of car parking areas found along this stretch of sand. At some of the places you can park your car, walk about 4-5m, cast out your line and rest it up against the rail, and then go and sit back in your car and wait for the fish to bite.

Whiting, dusky flathead and bream are the most common catches here. However, at times the tailor and Australian salmon will chase the whitebait into the shore, so make sure you have a few metal slices on hand.

This is a great place to fish when the southerly winds are blowing. There are a number of groynes here where you can walk out to the end and cast a line out for whiting, flounder, dusky flathead, silver trevally, bream, tailor and Australian salmon. When you get there you will notice that there are a number of weed patches. When casting out, aim for your bait or lure to land near the edge. It’s not a good spot to fish from when a northerly wind is blowing. Hunting squid off the wharf at the end of Wonga Road is best done at night, but remember to keep the noise down while fishing there. 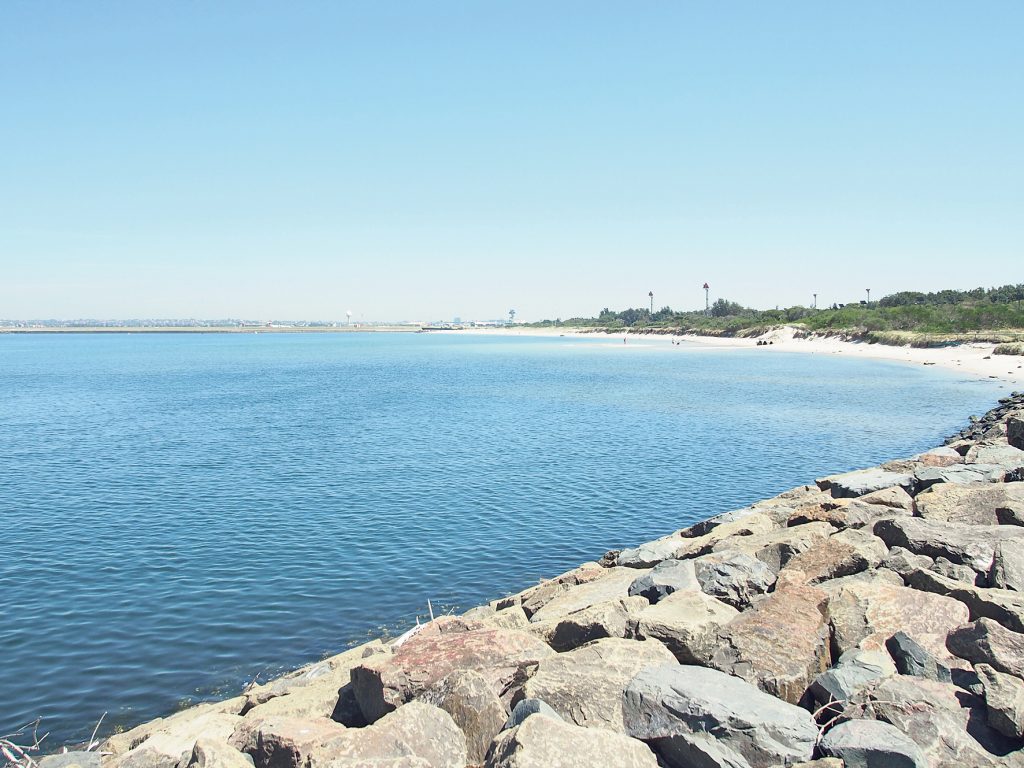 If the area of La Perouse isn’t firing you can try off the break wall at the Port Botany boat ramp. The western side of Dolls Point is a great land-based spot at low tide because you can pump your nippers and fish for bream and whiting into the deep water.

Located at Blakehurst, Bald Face Point can be fished on both the run-in and run-out tide, but you will need to have an outfit that will allow you to cast out at least 40m. Bream, dusky flathead, whiting and mulloway can be caught here during the day. The parking here isn’t the best, but if you get there early you should get a spot close by. If not you will have to walk from one of the side streets.

This is located on the northern side of the Georges River, just downstream of the Como Bridge. When you get there you will find a large area that you can fish during both the run-in and run-out tides for bream, dusky flathead, whiting, mullet and mulloway. You will only have to cast around 20m to get out to the prime fishing grounds. Even though you can fish back towards the back of the bay from the point you will need to watch out for boat traffic, as there is a boat ramp up in the back of Oatley Bay.

One of the best spots on the Georges River is right at the end of the Old Forest Road adjacent to the Lugarno Seafood Restaurant. Right at the water’s edge is a great fishing platform that will have you casting out into the deep waters of the Georges River. It’s a great place to bring the family for a fish. Bream, whiting, crabs, dusky flathead and the odd mulloway can be caught here on both bait and soft plastics.

This bridge can be fished from both the northern and southern sides. The northern side has a concrete platform where you can park right next to where you’re going to cast from. The southern side has a small wharf that juts out towards the first pylon. Both of these land-based spots seem to fish better on the run-out tides for bream, whiting, mullet, luderick, tailor and the odd mulloway.

Situated on the northern side of the entrance to the river, Salmon Haul Bay has a number of spots where you can cast a line for whiting, bream, flounder, squid, tailor and dusky flathead. Even though there are a few rocks in close, a decent cast will get you out onto the clean Port Hacking sand. It’s a great spot to fish from if the winds are coming from the north because the high rock ledge will give you some protection. Tailor and Australian salmon sometimes come into this small bay chasing the whitebait, so keep those lures handy.

Nestled right up near the end of Gunnamatta Bay, this spot has a nearby park, netted pool, shops and plenty of parking. It’s just a short walk from the parking area to the baths, and once you’re there just cast out towards the boats on the western side for bream, whiting and dusky flathead. You could also try walking along the beach to the south and fish the drop-off. Remember that even though you see nipper holes along this stretch of sand you are not allowed to pump for them here.

This spot is nestled in the back of the back. It can get quite cold during the afternoon because the high cliffs behind cause a shadow to appear as the sun goes down. Squid, whiting, tailor, Australian salmon, bream, dusky flathead, leatherjacket and silver trevally can be caught here throughout the day. I have even seen a few kingfish patrol past here.

To get to Jibbon Beach you will need to travel through the Royal National Park. Parking is limited in nearby streets, but it’s a short walk down onto the beach. Bream, whiting, silver trevally and the odd flathead can be caught here. It’s a great place to flick out few soft plastics during the early morning or late afternoon.

Well, there you have it a dozen places for you to have a try at land-based fishing in Southern Sydney.

If you’d like more information on the fishing in southern Sydney, or you have a fishing report or photo that you’d like to appear in Fishing Monthly magazine, send me an email at gbrown1@iprimus.com.au.

by Craig McGill • This article is dedicated to the non-boaties. Here are a few of my favourite shore-based Sydney Harbour spots for the pescadores de tierra. MIDDLE HEAD       This place holds kings hold […]

by Ben O’Brien • My favourite season of the year is here. Finally the weather is looking better and it’s far more tempting to get out of bed before sunrise and tackle our waterways. The […]

••• Report supplied by sneakyfisho.com ••• Feb 20, 2020: Fish are on the move again, and although the water is still not clear there have been some good results for those fishing inside the harbour. […]