September has seen the days slowly get longer and night has lost a bit of its chill. This transition out of winter/dry season patterns is the spark that lights the fire under our SE Queensland freshwater fisheries. Not only does it offer the ability to catch more fish using a multitude of techniques, but the species options also increase. October is the month to cash in on these changes as a freshwater angler.

Although it was not the coldest winter, it did get cold enough that weed around the edges of our impoundments has either become dormant or has died off, reduced to a layer in the shallow margins or in some cases, no weed at all. The colder temperatures have taken their toll.

The transition period sees the margins come to life again as water temperatures slowly increase. Weed begins to re-establish itself and with that comes increased insect and baitfish activity. With comfortable water temperatures, plenty of cover to hide in and a buffet of food to eat, freshwater species are going to relish this opportunity to flourish.

What species do you want to target?

When I was planning this article, my first thought was to focus on the big three species: bass, golden perch and barramundi. However, it occurred to me that as freshwater anglers in the area of Mackay down to the NSW border, we are blessed with opportunity and species. Add saratoga, sooty grunter and Murray cod to the equation and there is something for every fisher.

Many of our SE Queensland impoundments are heavily stocked with Australian bass. The winter pattern to target them is heavily based on the fact that the fish go into spawning mode and school up in large numbers in deeper water. As this spawning urge subsides and the dinner bell calls, they can be caught in all manner of lures like crankbaits, spinnerbaits, surface lures, soft plastics, stickbaits and spoons, just to name a few.

Jason Ehrlich provides a comprehensive rundown in this magazine every month on what might be best and where, but these are some of the best.

Maroon Dam is a great little fishery with an excellent surface bite. It is a great place to experiment with techniques, as most will work.

In Hinze Dam, there is an abundance of timbered arms and this structure is very attractive to fish. Like Maroon, your technique options are only limited by your imagination.

Somerset Dam is not really recognised as an edge bite fishery. It can have a small window of opportunity in October, especially if an increase in water levels occurs. There are some seriously big fish in Somerset and tangling with them around the edges is a challenge in itself.

As picturesque as it is fishy, Borumba Dam has plenty of structure, both timber and weed beds, to get fish to the edges and on the chew.

Boondooma and Bjelke-Petersen dams have low water levels at the moment but still hold plenty of fish. Visiting these areas will support the local community and areas in need. 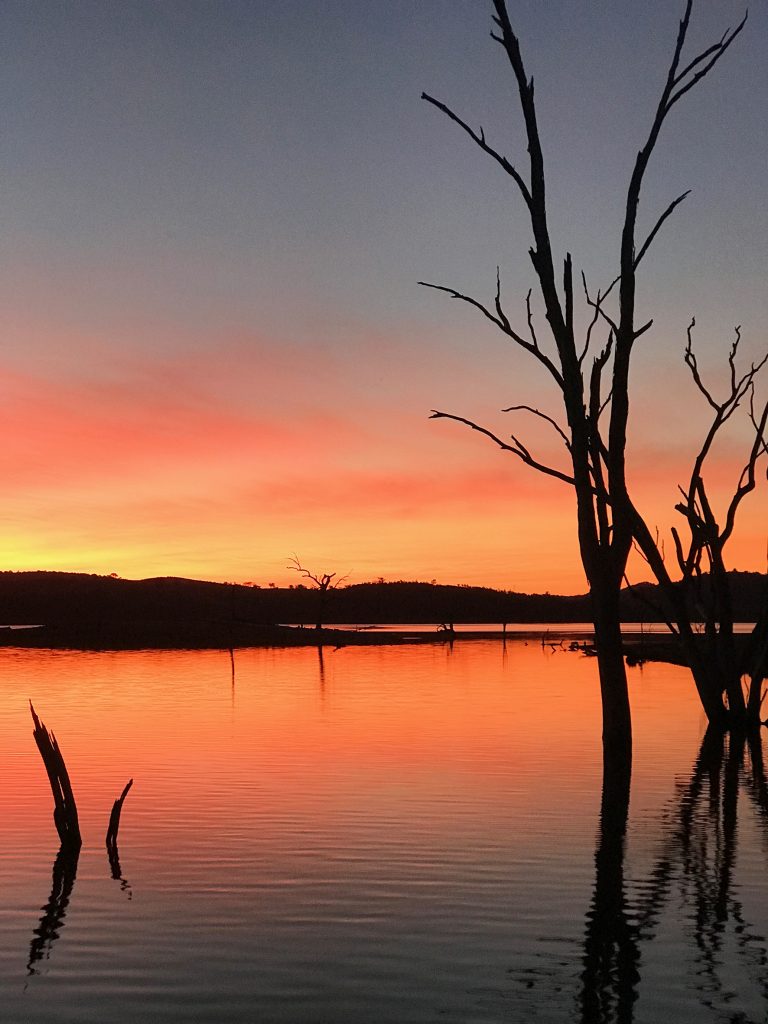 It is not always about the fishing. Sometimes it is about enjoying where you are, like stopping to watch a beautiful sunset over Glenlyon Dam. Glenlyon Dam is a legendary Murray cod fishery and is well worth visiting to get your cod fix. 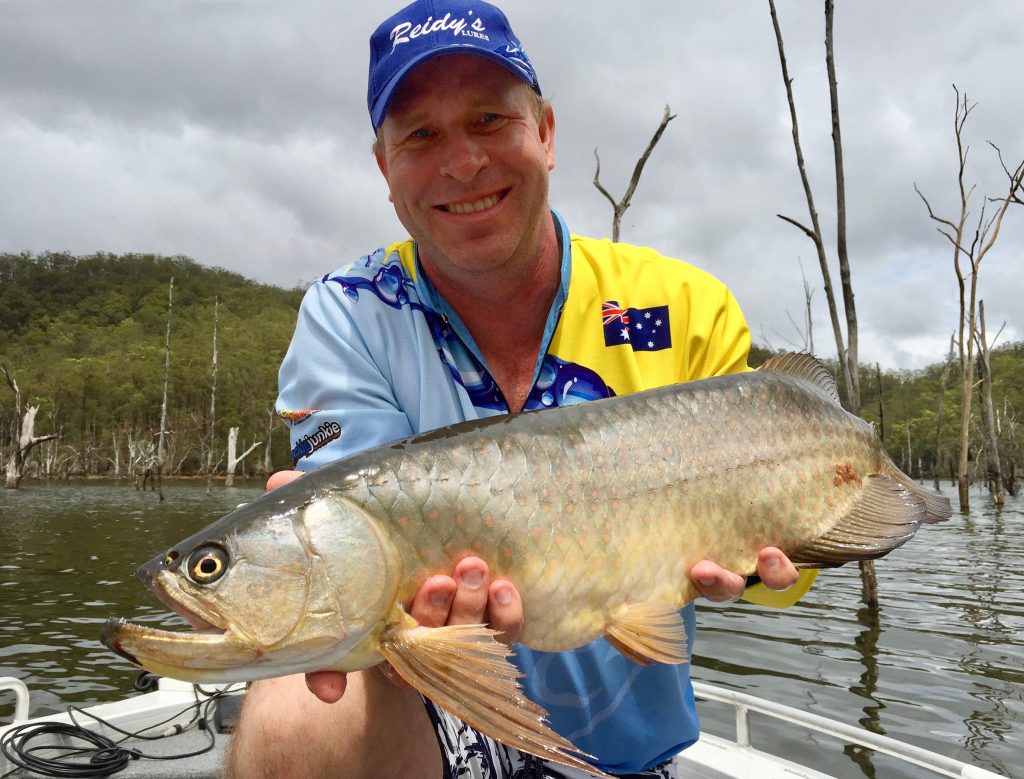 Borumba Dam is regarded as SE Queensland’s premier saratoga fishery, as the author demonstates with this prime Borumba toga. 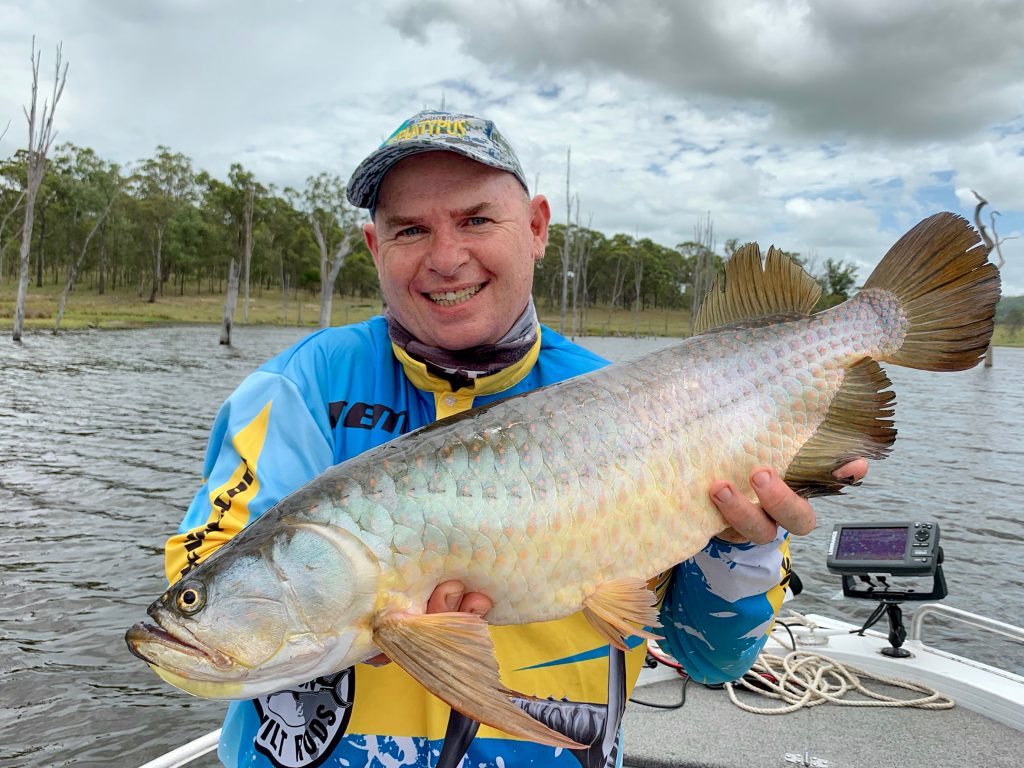 Nicholas Willett has every reason to smile. This was his second saratoga of the day. Hopping soft plastic vibes like the Zerek Fish Trap around timber and weed edges has been a very effective technique in recent years. This barra smashed Troy Dixon’s Fish Trap as he ripped it out of a deep weed edge. Photo courtesy of Troy Dixon. 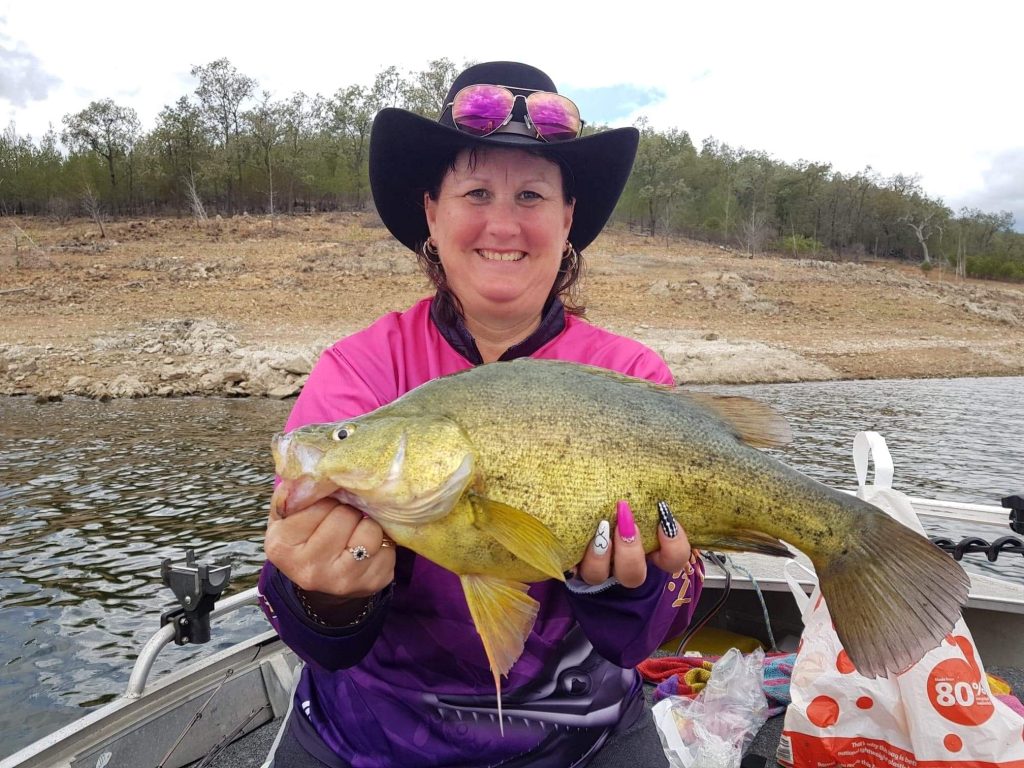 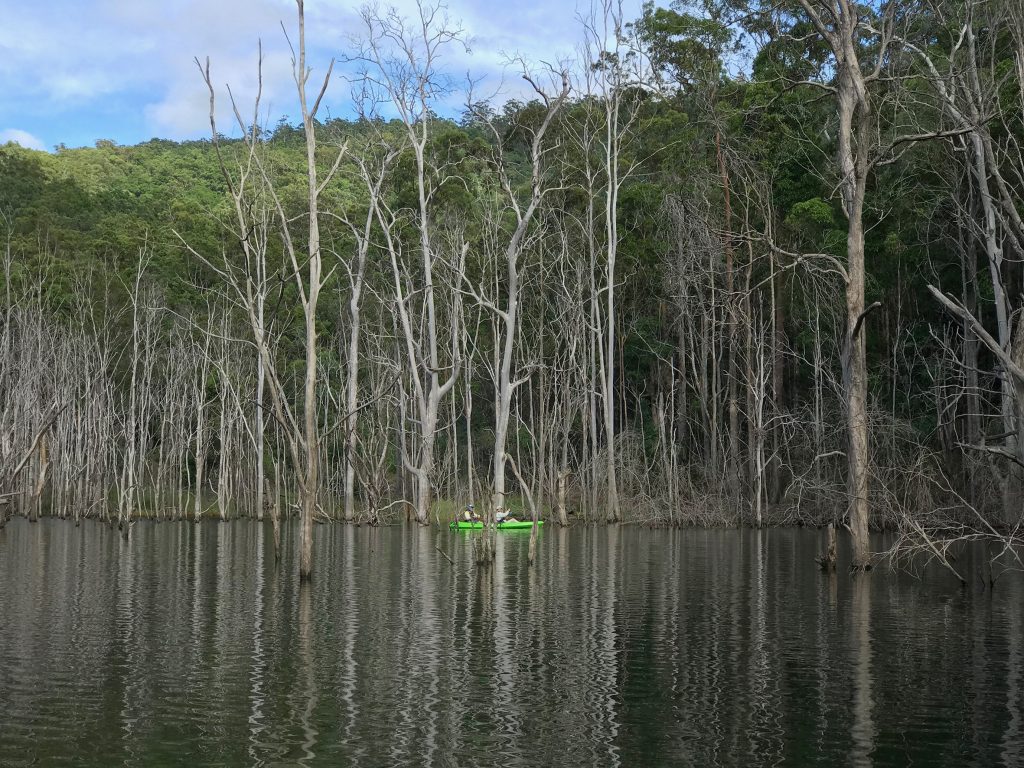 Hinze Dam is full of structure and fish. A great way to target them is by using a kayak. 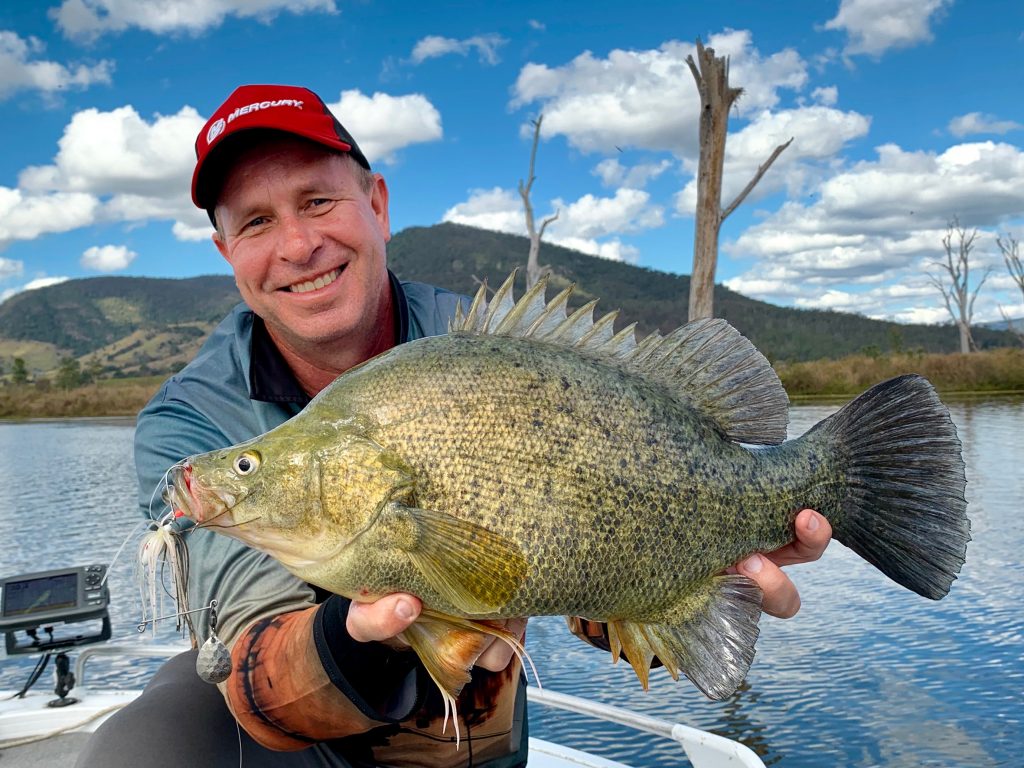 There are plenty of quality golden perch to be caught in the impoundments. The author caught this solid model on an Obsession Spinnerbait rolled through some standing timber. 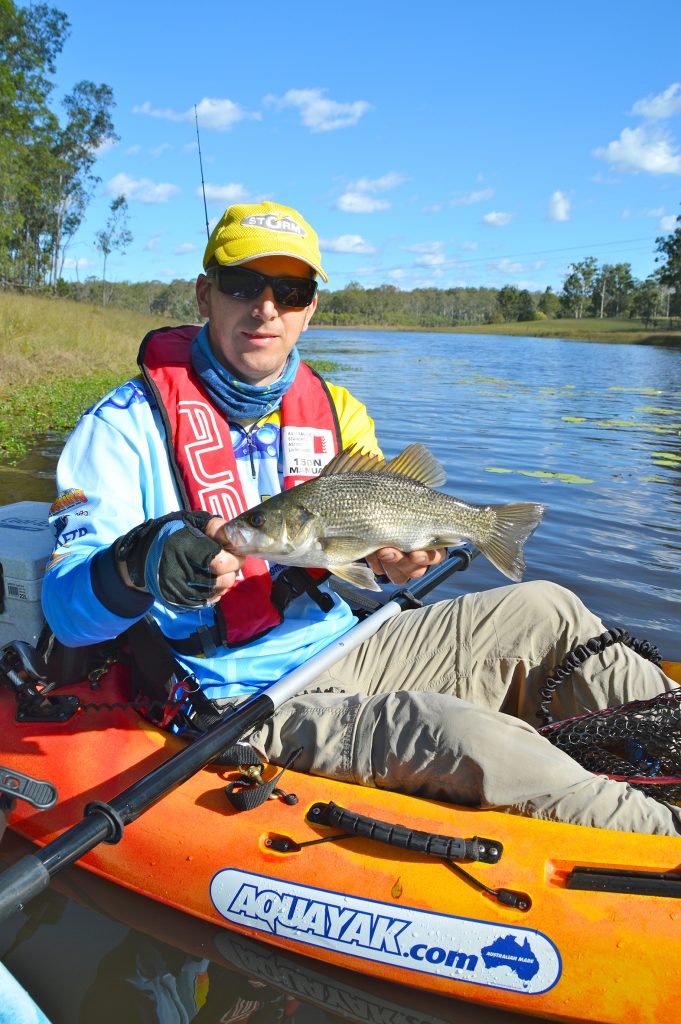 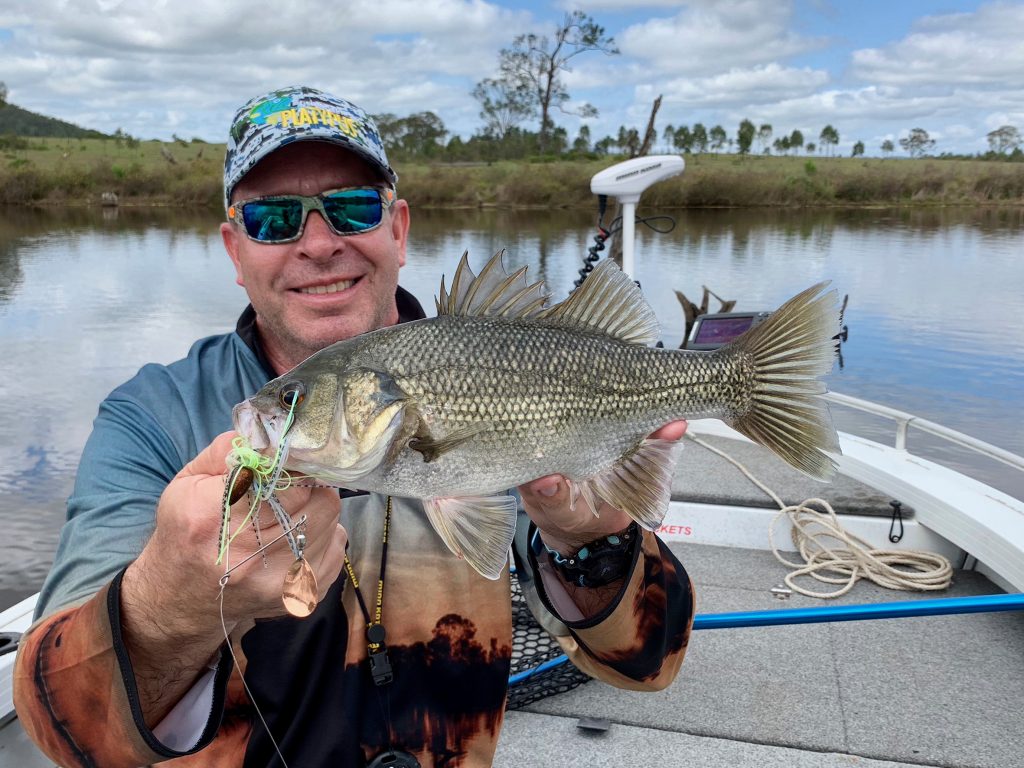 As the days get longer and the impoundment margins come to life, bass will snap out of spawning mode and make their way to the edges.

There isn’t as much hype about golden perch fisheries as there was when I first came to Queensland. Somerset Dam in particular had a dedicated group of anglers who focused on them back then, but this doesn’t seem to be the case now. Although they have been stocked in most waterways, the key fisheries are the more southern impoundments. Glenlyon, Leslie, Cooby and Coolmunda are all excellent golden perch dams, with Wivenhoe, Somerset and Borumba holding some trophy-sized fish.

Goldens love structure in the form of timber and rock. If this coincides with a change of depth or deep water nearby you have every chance of tangling with one. They are very partial to lipless crankbaits and spinnerbaits, but a method that has proven to be highly effective is to roll plastics (black curl tails) up and down the trunks of standing timber. It is not uncommon to catch multiple fish from one piece of timber.

From the Mackay region down, there are a number of decent impoundment barramundi fisheries. Kinchant and Teemburra near Mackay have had quality fishing for many years.

The exciting thing for SE Queensland anglers is that most southern dams in Lake Monduran and Lake Awonga are showing signs that their recovery is almost complete after both lakes overflowed and many of the stocked fish departed over the dam walls. Reports from the lakes are that the fishing during the cooler months was better than ever and the average size of the fish caught is increasing.

The transition period is a great time for barramundi. They tend to slow down a bit through the cooler period, so they are extra hungry when the water starts warming and consistent wind patterns push the food and predators to the shorelines facing the wind direction.

Points and weed edges can be targeted using hardbodied lures worked in a rhythmic action back to an anchored boat or larger paddle-tail plastics slow rolled along weed edges. Ripping larger soft plastics vibes out of the weed is another technique that has proven deadly recently.

This may be one of the best years in the SE Queensland barra impoundments in a long time.

This is one of my favourite fish to catch. They are seriously aggressive, using lilypads, timber and weed to hide in before ambushing their prey. In many cases, hooking a toga is no guarantee that you will get them to the net. They have a hard mouth and a knack of spitting your lure even when they look well hooked. Spinnerbaits are the most consistent option to catch a saratoga, but lipless crankbaits, fly and surface lures are pretty deadly as well.

Lake Borumba has the most well known saratoga fishery, however there are plenty of other options amongst the impoundments. Hinze Dam, like Borumba, has provided regular captures for a number of years now. Some other dams holding good numbers of saratoga are Lake Kurwongbah, North Pine Dam, Lake Somerset, Lake Wivenhoe, Lake MacDonald and Ewen Maddock Dam.

If you haven’t tackled one of these fish before, October and November are the prime months to find them terrorizing baitfish in the shallow margins.

As the least available fish but one of the most satisfying to catch, sooty grunter are big balls of muscle and a brute to catch. Like Australian bass, they can be caught on many types of lures but the best fun is had on surface lures and hardbodies.

Eungella Dam near Mackay is a world-class sooty fishery. The timber in the arms of the dam is home to these fish so it is just a matter of swimming the lure past them to get the bite. Extracting them from said timber becomes the next challenge.

This fishery should be on every angler’s bucket list.

I questioned whether I was going to include Murray cod in this article. However, there are a great group of fisheries in the very southeastern corner of the state and each area is struggling with the drought. Visiting these areas not only gives you the opportunity to catch a fish of a lifetime, but any money spent supports the locals.

There are a number of dams that hold good numbers of cod. Cooby Dam, Lake Coolmunda and Leslie Dam are smaller waterways that have been affected by the drought. Care should be taken launching and navigating these waterways with low water levels, but the reward is that there are some quality cod residing there. Spinnerbaits and hardbodied lures produce the best results. Look for depth changes and structure (timber, rocks etc.) to cast around.

The pick of the dams is Glenlyon. It is also heavily affected by low water levels, but access is better and there are some big cod to be caught. There is plenty of obvious structure to fish around and don’t be afraid to take your swimbaits and surface lures, because these will come into their own when fished during the low light periods.

TIME FOR A TRIP

The impoundments in Central and SE Queensland are fantastic fisheries all year round and there are many more out there than just the ones mentioned. They may be year round fisheries but the prime time to catch them at their best is in October and November, so plan your visit today! Don’t forget these are not just amazing fishing places, but also support the local communities as well.

Getting jacked in the South East

by Simon Goldsmith • Few species garner the respect and adoration of mangrove jack. Highly-strung, aggressive and with a reputation for a crash-and-grab approach to living, mangrove jack are a fish that all light tackle […]

by Jamison Godfrey • This is a dish that can be served either standing or sitting down, whether it’s a dinner around the table or it’s a get together around the family BBQ. Let’s not […]