I don’t eat as many these days but living in the Albert and Logan catchment area provides an abundance of mulberries and the introduced carp gorge themselves on them for a few months of the year. In this article I will tell you how to use them to good effect targeting the big noxious carp that plague these waterways.

A Quick Run Down

For those who need to get up to speed Australia has a massive problem with pest fish and at the pointy end of the list is European carp. The problem with carp is their destructive bottom-feeding habits, which stir up sediments and destroy native fish habitat. Erosion of banks and bankside vegetation can muddy the water forcing natives out and with excess sediment, natural spawning sites over rubble runs can silt-up and disappear altogether.

Carp also compete for food with our natives and have the upper hand thanks to their omnivorous diet and their ability to take advantage of fruiting trees along our waterways. The spread of carp has now consumed most of southeastern Australia and unfortunately it is impossible to eradicate them completely, even with the countless efforts by government bodies and concerned members of the community.

This is where anglers like myself step in and use these wary targets to hone angling skills and help tip the balance back in the native’s favour. The time the mulberries are in fruit every tree along the creeks and rivers have a constant school of carp underneath them inhaling every berry that drops into the water and with some stealth and the correct technique, they can be targeted quite easily.

Failing this, the ripe berries on the ground will suffice although they can be harder to keep on a hook due to their soft nature. Premium bait berries are ones transitioning from the red colouration to the ripe dark purple colour that are famous for their hand-staining ability.

Baits aside the set-up is quite simple as all you need is a light combo such as your bream or bass gear. In tech terms, a 7ft spin rod matched up with 1000-2500 threadline reel spooled with 4-10lb braided line and a 6-10lb fluorocarbon leader will do the job perfectly. On the flip side, a kids combo filled with light monofilament can still match it with the best berry tossers getting round. I have tried a number of hooks, but have found a small un-weighted treble works the best.

The benefit of the trebles is obviously the multiple hook points as two points can be placed in the berry with one left exposed. When baiting up try and bury one point through the stem and the other in the flesh, as this helps keep the berry attached when casting. 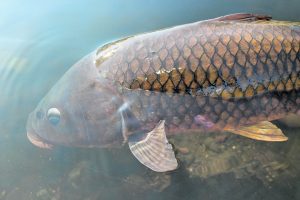 Carp can be quite a pretty fish, sometimes it’s a shame that they need to be dispatched. 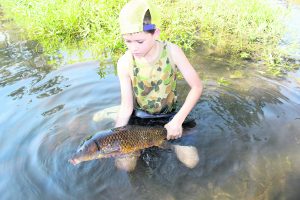 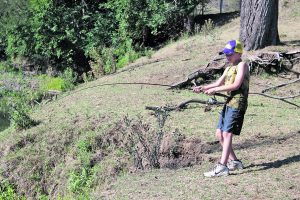 Blaise hooked up on a berry-muncher. 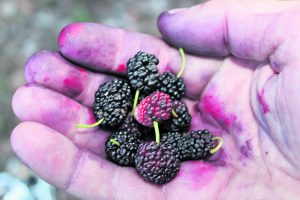 The mulberry and the tell-tale stains they leave behind. 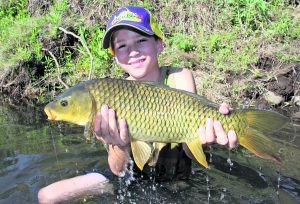 The author’s son Blaise enjoyed the hunt and the battle but not the dispatching. 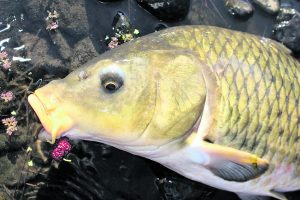 It’s a simple rig but there are still a few tricks worth noting. Some berries float, which isn’t the optimal bait when presenting to mudding fish, nose down sucking up silt and searching for food or fish cruising on the bottom doing the same thing. This can be countered-acted with a gentle squeeze of the mulberry before casting.

So you have your rig and you have your bait, now finding fish to present a berry to is also quite easy and is done by simply walking the bank with a bit of stealth from an elevated position, polarising the water for signs of movement. This is also best done on the opposite bank to the sun to prevent casting shadows on the water. Most carp you encounter are usually on an endless search for food, so don’t rush, just keep an eye on them as they tend to do laps around their pool. This is your chance to get into a position to make a cast as the carp turns away, you have less chance of spooking it. When it turns to come back, you’ll be ready.

A well-placed mulberry gets a look in every time and the secret is to land the bait a couple of feet in front of the carp in the direction it is swimming. During the mulberry season, carp are accustom to falling berries and as long as you don’t splash one down on their head. You can see the noticeable change of mood as the carp makes a v-line for the slowly sinking bait. Next you see the yellow rubbery lips suck in the berry and after a split second, quickly set the hook! They are quick to reject the bait once they feel line or the hook.

The introduced European carp is noxious and must be destroyed and removed from the waterway by law. It is unlawful to possess carp alive or dead or use them as bait and penalties apply.

The other issue I have found is the moral dilemma when it comes to dispatching and disposing and perfectly good fish. If you spend enough time chasing your quarry and a part of you becomes attached to it and if you can’t bring yourself to humanly euthanize the carp after the fight, then I suggest leaving carp well alone.

If you’re prepared to quickly euthanize the carp, then a solid percussion stunning technique works best and it is suggested that burying pest fish after this process would be the way to go.

by Wayne Kampe • Camping in peace and solitude is not something everyone is going to enjoy, but most anglers – myself included – just love it. That quiet serenity is exactly what you get […]

Back to Basics: Learn to overcome your fear of flying!

by Steve ‘Starlo’ Starling • Flyfishing has a reputation for being a mysterious and difficult art, mostly practiced by crusty, pipe-smoking old toffs in tweed jackets resplendent with leather elbow patches… But the times have […]

Are your flatty skills up to scratch?

by Bob Thornton • We’re finally at that stage along the east coast where the weather is warming but the water is still cool, and for the estuarine angler this can only spell one thing […]