Everyone now knows about Hervey Bay’s famous run of juvenile black marlin. Social media buzzes with news of these fish almost as soon as one is caught, and what was once a quiet fishery enjoyed by a handful of anglers in the know is now pretty busy. I counted 18 boats working one patch about 1km long last weekend. The word is definitely out!

This isn’t necessarily a bad thing though. The fishing over the past couple of years has been great, with many anglers both young and old landing their first marlin – a real milestone. Quite a few saltwater fly anglers have also caught their first on fly. Tackle shops, other retail outlets and accommodation have all benefited, with thousands of dollars flowing into the local economy just over this one species.

Fraser Island’s northern flats are the only place in the world where black marlin can be sight fished to in water as shallow as 5ft. This fishery is truly world class, with longtail tuna to 25kg, queenfish, big goldens and recently a visiting Sydney punter caught an 80kg big-eye tuna in 3m of water on a fly rod! In this same area we have caught bream, whiting, flathead, tailor and even four bonefish in one day!

So how frequently does this phenomenon happen? Well, many new anglers to this fishery seem to think it’s an annual event but let me tell you it’s not. Years ago I saw a massive migration of these juvenile blacks. Well before my ANSA days in the late 80s I heard about it, and possibly the first serious sportfisher in the area, Dave Brown, told me about schools of 15 juvenile blacks swimming in the first gutter off the beach only 15m from shore. Now that would be awesome to see!Then, over the next seven years, not one fish entered the bay. Nothing. Their arrival all depends on weather patterns; a big northerly year pushes all the cold green currents into the bay, and pelagics seem to disappear – spotty mackerel, tuna and the marlin. This year, however, has been pretty good so far. I saw 11 fish on the flats on a recent weekend, hooked four and landed one. 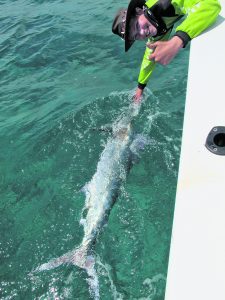 Make sure you swim these fish well before release. 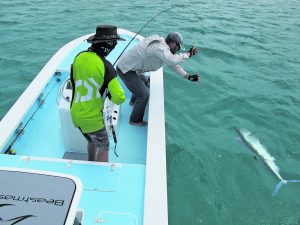 A small black about to be landed. 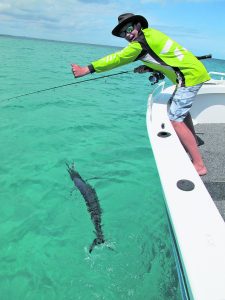 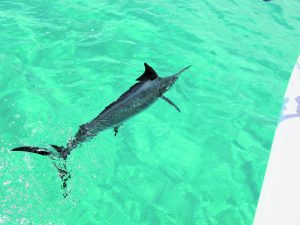 These fish show up starkly against the Fraser Island sand in the shallows.

Bigger tides seem to work well, especially over the top half of the tide, but this is a general rule. The lead up to the moon also is another tip worth remembering, but bigger tides seem to bring more wind. More wind blowing over Fraser Island brings more clouds, which are the worst enemy for anglers fishing the shallows. You can have your eyes locked onto a fish and then a cloud blocks out the sun and it vanishes! I strongly recommend quality sunglasses for this kind of fishing. I use Mako Blades with G3H6 lenses, and have found them to be invaluable when there are clouds, intense sunlight or glare from a low sun angle early or late in the day.

Tackle preference is totally up to the angler. I prefer medium spin tackle because most of these fish are 15-35kg. I’ve found that 4000 sized reels and 30lb braid do the job. I have been using a 4500 Saltiga on a Saltist Extreme 762 rod, and when loaded with 40lb J-Braid this outfit knocks them over easily, allowing for a quick, clean release. These fish don’t handle stress well so it’s best to keep photo time to a minimum and swim them towards deeper water for release!

Fly anglers have a ball fishing for these guys, and a good 10wt will do the job. Some anglers use heavy 14-16wt rods, but this is overkill on these small fish and hard to cast all day.

Juvenile blacks are very aggressive and quite often you will hook a fish only to drop it, then it will turn and attack the lure again. This seems pretty dumb; a tuna or mackerel would head for the hills after the first bite!

I have caught little blacks on plastics, poppers, hardbody minnows, live and dead baits and flies. Recently we have been using stickbaits rigged with 5/0 singles for a better hook-up ratio, and have been having good success on them. We’ve been using Daiwa 140mm Overthere stickbaits, but anything that resembles a gar or flying fish will get bitten.

Small blacks don’t seem to spook from the boat, either. They fearlessly swim right to the boat and hang around for a look. In the shallow water they look very dark, almost black, and show up well against the stark, white Fraser Island sand!

The run of fish seems to start in mid-October and run until late December, with just a few stragglers left. That’s when they keep heading south on their migration through Moreton Bay and right down the NSW coast.

So there you have it – marlin aren’t just a fish for the rich. Anglers fishing from boats as small as 4m have caught them along the western side of Fraser, and several anglers are trying their luck from kayaks launched off the beach. It’s only a matter of time before they succeed.

Trolling from the yak

by Justin Willmer • About 30 years ago, when I was a young tackle rat, as opposed to the older tackle rat I am these days, I picked up three cheap hardbodied lures from the […]

by Justin Willmer • Whether you call it ‘Fraser Island’, ‘K’gari’ or simply ‘paradise’, this natural wonder draws tourists and anglers from around the world, visiting both the island itself and the fishing Mecca that […]

by Gordon Macdonald • Spanish mackerel can be rather cagey and hard to tempt at times, especially on trolled lures. Years ago, anglers began exploring ways to present natural baits in a manner where they […]