There is little in the piscatorial world that hits a lure harder than a mangrove jack. The sheer ferocity and violence of the strike leaves fishing reels screaming, rods bending, and anglers struggling in desperation as they try to control the red streak of fury attached to their line. From the moment you hook your first jack, the feeling and power is simply addictive and it’s of little wonder that anglers hold them in such high regard.

One of the most appealing features of the mangrove jack, apart from its sheer brute force, is its availability. Once regarded as a specialised north Queensland only fish, the jack has spread its fins with captures now beyond our state’s borders now common. In fact, the mangrove jack has now become a staple target species in southern waters just as much in northern waters, which is testament to its natural ability to not only survive but dominate and thrive.

There is much debate around this so called ‘spread’ to the south, however, for those anglers who have been chasing these fish for a decade or so will know, they have always been there. The development of canal estates and other manmade structures has seen the mangrove jack adapt and, most importantly thrive in systems that now hold fish and sometimes even out fish some of the best creek systems of the north.

But it doesn’t matter where you target these red fish, there are a few hard and fast ideals to stick by if you are going to experience that red success.

Firstly, structure is really key. Jacks are ambush predators and opportunistic feeders, and while the odd fish may freely roam, the majority of jacks will hold up on a piece of structure that will provide the opportunity for an easy and quick feed.

This is usually on an edge or snag where current will funnel bait through on the tide. Jacks will wait patiently for these baitfish to move through where they will pounce on their prey in a swift and deadly fashion.

These fish are not shy in feeding, and unlike many species like barra that feel tail to head, the jack is well aware of how to disable a baitfish and will almost always smash fish head on. They will charge at their prey before taking an aggressive turn of direction, hammering their prey head on before retreating back to their snaggy home. This is why many anglers find themselves completely bricked in structure before they even get a chance to get into the fight as the jack is already half way back to his home before the drag washers are sinking in.

It’s this aggressive pit bull like nature that many anglers, including myself, just love about jacks. While barra will roll or stick their nose up at lures at times, jacks will always smash an offering if you can get it close enough.

This leads to the second significant factor of getting your lure in the strike zone. Put simply, when you think you are getting close enough to structure, go a little closer. The further you can get that lure or bait to the structure, the better your chances of red success. This is why I love weedless soft plastic rigs when fishing for jacks. Being able to go right into the timber or rocks and bounce around in their snaggy homes will bring the best results. Sure you may lose a few battles here and there, but it’s the risk which makes the reward that so much sweeter.

It is no secret that jacks love to sit tight in structure and the jack strike zone is often measured in inches, not feet. In fact, a mere two inches off a snag can often be the difference between a lure crunching red boil or still water and a slack line.

This is where some of the newer bait caster reels are excelling with the latest technology as they allow the smallest of under or over hand flicks to send lures deep into where it needs to be. Every successful mangrove jack lure fisher will tell you, casting accuracy is paramount to success and with this much technology and innovation packed into one reel to enhance this, your chances of snaring a big jack will be on the improve right off the bat.

The third factor that comes into play is having a combo that can extract a big jack when needed. While casting accuracy is integral to jack success, so is the ability to put the brakes on a big fish and extract them out of their snaggy leader-destroying homes.

When fishing tight into timber and structure, having a reel with plenty of stopping power, but more importantly, is incredibly smooth under heavy load is crucial. The initial impact is so violent and sudden that sticky drags can see even heavy poundage braid or leader snap. Being able to apply heavy-handed pressure to extract these fish away from snags but at the same time have a drag system that is silky smooth allows the angler to have no fear of pulling hooks or striking too hard on hook up.

My preference is to fish the Daiwa TW Zillion range of bait caster as there is plenty of drag pressure per kg to handle these big red devils and the oversized star design allows the angler to easily crank it right up in the midst of battle if needed without giving an inch. Large, perfectly balance handles also allows for awesome cranking control and are perfect for getting the upper hand early in the battle when most jacks fights are either won or lost. This reel provides plenty of muscle under load but in a subtle smooth form and is perfectly suited to not only putting the brakes on, but cushioning the intense ‘in your face’ style jack attacks. I also prefer reels with a higher retrieve ratio as being able to quickly retrieve those valuable inches early in the fight can make a huge difference to success.

On occasion, you will find tangling in the timber unavoidable so using a high quality fluorocarbon leader like Sunline FC100 is highly recommended. 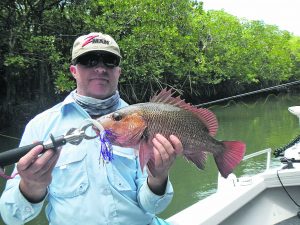 If you are a southern angler don’t discard you bass or cod lures as they work a treat on mangrove jacks.

Overhead reels like the Daiwa TW 1516 Zillion are ideal for chasing jacks. Spin gear also has its advantages as well and certainly is not to be overlooked. 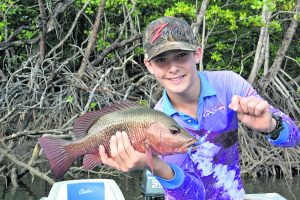 Take note of the heavy structure in the background. Jacks love structure, so the snaggier the better. 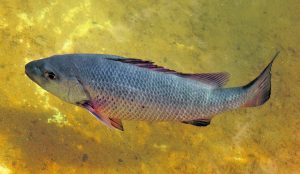 Jacks are powerful predators and are feared by every baitfish swimming in the creek. 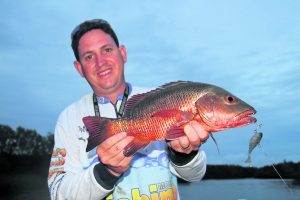 Vibes are ideal to use when fishing deep-water midstream structures. 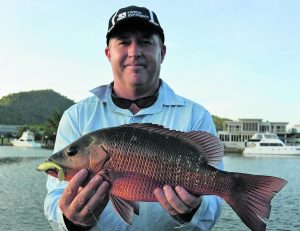 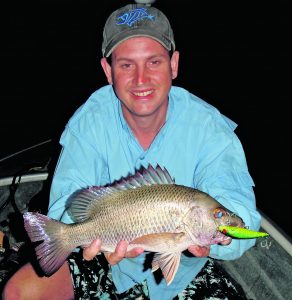 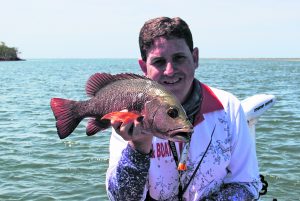 Jacks love a popper, especially when worked during times of low light over shallow structure

When it comes to choosing the best offering to snare a jack, lures are your best and probably most effective. Unlike other species of fish such as barramundi, which can be finicky on lure choice, jacks are far less picky and will readily hit a wide variety of different offerings.

When fishing soft plastics it is hard to go past a paddle-tail fish profile plastic as small mullet and herring make up a major part of their diet. Jacks love a slow rolled paddle-tail, especially as it is leaving the strike zone. Other effective plastics include prawn style plastics, especially when fishing into deep timber.

Whichever way you go, fishing weedless is a very good option as this allows you to get deep into cover. Don’t worry about the hook up, as jacks love to smash everything hard.

Hardbody lures can also be very effective. Like the paddle-tail soft plastic, a slow rolled hardbodied lure is often the perfect imitation. I prefer to fish green colours for jacks and hardbodied lures are definitely a top option, especially when fishing at night.

Surface lures are also quite capable of snaring jacks, however try and fish shallow timber snags where your popper or walker can work its magic just above the jacks home. They will commonly smash the lure out of sheer aggression, making for an exciting hook up.

Vibes can also be very effective in deep water scenarios or mid stream snags. Vibes allow you to work these deeper structures staying in the strike zone longer.

Mangrove jack fishing is something every angler must attempt. The basics are pretty simple and all it will take is one well-placed cast and you will be hooked. Now is the best time to be targeting these red devils so make the most of it and feel the thrill of a jack attack.

Jack tactics from the far north

by Angus James • Red devils, dogtooth bream, or red dogs – these are a few of the names given to one of Australia’s favourites. Of course I’m talking about the mighty mangrove jack. They’re […]

by Gordon Macdonald • When fishing soft plastics through heavy structure, anglers have adopted numerous methods to ensure they have a reliable rig to hook their quarry while still being able to work their offering […]

Back to Basics: Putting on a puppet show

by Steve ‘Starlo’ Starling • It turns out that successful lure fishing and puppetry have a great deal in common! Winter is finally behind us and, with it, the bulk of the ‘show’ season. Boat […]