Another barramundi open season has come and gone and for many anglers it has been a tough one. The severe lack of monsoonal activity and consequent flooding rains across the state has seen very limited run off and virtually no opportunity for the iconic barramundi to spawn.

I can recall a similar set of meteorological events almost a decade ago where the total absence of a wet season saw catches of barramundi plummet. Hopefully the wet season will return with a bit more force in the coming months which will see numbers increase again. Until then the other sad news is that barramundi is off the target list and these iconic fish are now on a well-deserved summer holiday where they can fatten up and get ready to breed. With such a poor wet season already decreasing numbers it is vitally important that over the coming months anglers take measures to ensure that the barramundi see as little stress as possible. Here are a few tips that you can implement while fishing if you encounter a barramundi during the closed season.

The most important rule during the closed season is not to target barramundi. This is a fine line and hard to avoid but there are some strategies which can help avoid accidental capture.  Firstly try to downsize your lures as a start to around the 4” mark. While downsizing your lures will not completely avoid barra captures it does limit the catch of the big breeding female fish. These lures may still snare plenty of the smaller male barra between 50-70cm but it’s the bigger models which need the most protection this time of year as research shows that added stress can interrupt the breeding and spawning cycle significantly. The same can be said for live baiting – using 20cm live mullet up the creek is just being reckless. Anglers may tell you that they are chasing big golden snapper, threadfin and jacks but it’s not rocket science to try and be a little cautious with your practice this time of year.

Another technique is to avoid fishing known big barra hot spots such as the mouths of creeks where the bigger fish tend to hole up this time of year waiting for the rains to fall. Once again it’s not a hard and fast rule but maybe turning your attention towards fishing smaller structures and timber where the bigger female Barra are less likely to be found is a good option.

If you do manage to find yourself accidently connected to a barramundi here are a few tips to ensure a safe and responsible catch and release. Firstly don’t let the fight last too long and try and get that fish to the boat as quickly as possible as prolonged fights will only harm the fish. Some will argue that keeping the rod tip high during the fight will also increase chances of the fish throwing the hook during the jumps however a lower stick will usually lead to a much faster catch. Once you do get the fish boat side do your very best to leave it in the water. Boat side releases are crucial this time of year as the majority of stress and damage suffered by the fish occurs when the fish are removed from the water. This is where using barbless hooks is a really good idea as it allows the angler to remove hooks with ease boat side. Take care to swim the fish using a hand locked jaw grip. If you can’t conduct a boat side release for reasons such as croc safety (be mindful that barra closed season corresponds with croc spawning times when they are highly aggressive) or the hooks are just too well stuck only then use a good quality enviro net which will limit the amount of protective slime taken off the fish. I’m still unsure why the DPI have not outlawed certain kinds of landing nets for this very reason. When lifting the fish out of water try and cradle it as best as possible and when placed on the floor do so on a wet towel to avoid the summer heated surface. Remember fish are coming out of an average 28°C environment to one that can be exceeding 30°C which is again multiplied when placed on a boat floor which can be retaining a temp of more than 40°C.

If lures, especially hard bodies are half way down the throat of a barra don’t get in there and rip it out. Once again use lighter gauge trebles and barbless hooks to ensure this process of removal is a simple one. There is no need to be using 4X or 6X hooks during the closed season. Make sure you have a very sharp pair of cutters so if you have to you can just cut the hooks off at the base and remove the hard body or soft plastic quite easily leaving the pinned barbs in the fish. When returning the fish to the water be sure to cradle the fish with a supporting belly grip at all times. Be aware that taking photos of fish out of the water during the closed season is simply disallowed because of the damage that can be sustained. Avoid vertical style grips at all times as this will stretch the fish and can cause fatal damage. 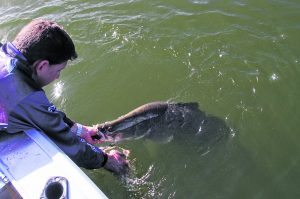 Boat side releases are vital to ensuring the health and survival of barramundi during the closed season. 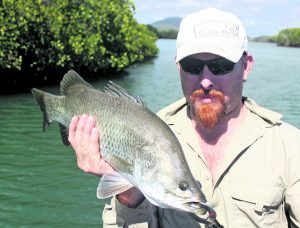 Small male fish like this one are hard to avoid during the barra closed season so its best to use lighter trebles and barbless hooks to ensure a easy release. 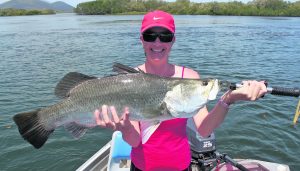 Barra this size and above are the ones that need the most protection during the closed season as they will be the ones which will be producing the future stocks. 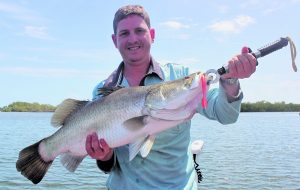 Big breeding females like this one need to be cradled and supported at all times. The jury is out on boga grip use however I no longer use these. 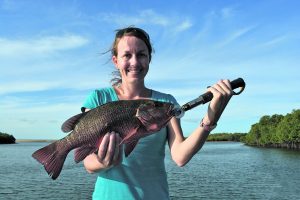 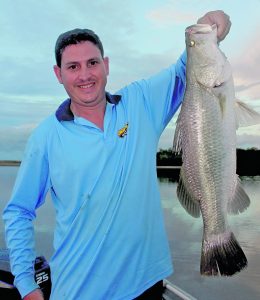 This is not the way to hold a barramundi and will more than likely stretch it’s vertebrae and kill it. This fish was taken for the plate during the open season.

As stated before it is best to avoid removing the fish from the water at all times. The best way to avoid barra is to target other species during the closed season. This is a great opportunity to specialise your fishing for certain species and specifically target jacks, grunter and flathead to make yourself a better angler. Unfortunately there are no hard and fast methods for avoiding barramundi entirely. Old bucket mouth does tend to show up just about everywhere and will eat just about anything at times no matter what the shape or size, however being responsible and doing your best to avoid them is important. It’s just as important to take care of them when captured as well.

If you are keen for a barra fix then get out and try your hand at the many barra impoundments across the state. This is the best time to fish them and with metre fish being the average size it’s a pretty good alternative. Being barra closed season responsible is vital especially during times like the present where numbers are already low.

by Andrew Matthews • The sun was kissing the pink horizon and the temperature was slowly dropping as the first cast was made into the darkening sea. Our berley was creating an enticing fishy soup […]

A day on the lake at wonderful Wyaralong Dam

by Bob Thornton • Whether you’re a tournament buff, a travelling fishaholic, or just a holiday angler, at some point you will find yourself fishing in unknown territory without any help. Chances are, if you’re […]

Stanage Bay is a stand up fishing place

by Liam Jones • With more and more people coming into the shop to ask about Stanage Bay, I thought it was time for an in depth look. Stanage Bay is located between Rockhampton and […]