In all fishing, understanding the fish’s basics habits only gets you so far. Knowing what they eat is certainly another piece in the puzzle, but with predatory species, getting an insight into their prey will go a long way toward finding and ultimately catching more fish.

Without doubt, one of the most common prey items for fish in Australia and across the world is prawns. Almost all species will feed on one of the many members of this family of crustaceans at some point, with an incredible number of fish species choosing these as a staple to their diet. Even bluewater species like tuna, mackerel and marlin have been known to chow down on prawns as juveniles in sheltered waters.

Luckily for us, many lure companies, fly tiers and bait distributors bring a lot of prawns and prawn imitations into our world so we can capitalise on the habits of our quarry and catch more fish.

Prawns are prolific all up and down our coast. In Queensland, we experience a run of prawns making their mad dash for the sea down rivers and inlets from about February. This usually last a few months, but the cycle changes slightly with each season.

In our southern waters, the start of summer sparks some incredible weeks of fun-filled nights. Those in the know will don a pair of waders, dust off the prawn net, put some new batteries in the spotlight and head out into the estuaries in the hope of scooping up some tasty prawns.

Up in the freshwater, shrimps, the prawns of the fresh, will be active almost year round and while they sit under bankside structure and vegetation during the day, the night will prompt them to mooch around in a search for scraps to sustain themselves. It’s during these dark hours that many shrimp will meet their doom.

In short, these little critters really are everywhere along our coast, but if you find exactly where they are in your local system, you’ll be able to target an area where the fish are eating prawns. Each ecosystem is different, and a bit of reconnaissance may be in order to find when and where the prawns are most active.

Making trips to the water at different stages of the tide and day, while time consuming, can really help narrow your search for predatory activity. If you’re lucky enough to stumble across fish chasing prawns, slashing through the water while the prawns take to the air in an attempt to avoid hungry mouths, you know exactly where to fish.

In an area where prawns are on the menu, sending a live, flicking prawn into a medley of splashes, or even just an area where you know fish are sitting is a method that seldom fails. But it’s getting your hands on this premium bait that can present a challenge.

Dead prawn baits will catch fish, as almost anyone who has held a rod in their hands will know! Packet prawn is really the entry level for a lot of anglers around Australia, and their certainly was a time when I would ride my push bike down to the nearest water’s edge and soak packet prawn for some bread and butter species. But by far the best prawn bait is some fresh, and preferably live and kicking!

A common method of collecting live prawns is to set baited traps that comply with regulations. These are particularly effective in freshwater.

Down south, using waders, scoop nets and spotlights is a great balance of effectiveness and fun, and is particularly favoured when children are involved.

How you rig these baits depends on the application and personal preference. As a general rule, if you plan to fish them as live bait, passing the hook through the tail, well away from the organs around the head, is a sure way to keep the prawn kicking and sending out good vibrations.

If you can see the fish that you want to catch chasing prawns on the surface, it’s sensible to fish with as little added weight as you can get away with. It’s important to keep in mind though, that added weight will aid casting distance. If you can’t reach the madness with your cast, you may need to up the weight. It can be a difficult balance to find, but ultimately the fish will let you know when you’ve found it.

Fishing with floats is fantastic when you want to hold the bait in a productive area. A suspended prawn or shrimp hovering naturally in the face of a hungry fish is about as deadly as techniques come. Some of my best childhood memories involve setting little baited traps at night, harvesting the shrimp the next morning, before rigging them under a wagler float and peppering the snags for bass. I still remember every nerve ending tingling in anticipation, just waiting for that float to be ripped beneath the surface.

In my search for shrimp-crunching river bass, often I’d only be able to gather really small shrimp, but there was a solution. By taking around 3-4 little shrimp and cramming them on a hook together, I was able to craft the perfect little mouthful for a hungry bass. It looked a bit silly but the bass didn’t mind!

Even after many years, artificial prawn imitations are still swum by the most seasoned anglers and account for plenty of trophy fish. From the early imitations such as Prawnstars and Deception Lures (which I still use today), to the more recent additions like Zerek Live Shrimps and Squidgy Wild Prawns, it seems the search to find a perfect imitation is never-ending.

Apart from being a very exciting way to fish, a live prawn or shrimp imitation has a few pros over actual live bait. First and foremost is that time isn’t spent trying to gather live bait, and instead a single lure can be fished all day.

Secondly, being a lure designed for casting makes getting it to likely areas a whole lot easier. Where an unweighted live prawn might only cast a few metres, an unweighted soft plastic prawn imitation is designed to cast far and sink slow, which enables an angler to reach feeding fish in the distance.

Thirdly, the action is imparted by the angler and can be tailored to what the fish want. Trying this with live bait would result in the bait dying prematurely or falling off the hook.

Some anglers like to employ small, subtle flicks to the lure to imitate a disoriented little critter that’s not up to speed with what’s going on, and this is the most common approach when working snags. Between flicks, it’s a good idea to let it sink back down into the ‘zone’. For species like bass, trout, mangrove jack, barramundi and estuary cod especially, I like to give 3-4 little flicks, and then let it fall, repeating this process until the retrieve is over.

There are species that are more receptive to aggressive movements of the lure. Species such as flathead, schooling bass, snapper, mulloway and other fish closely associated with the bottom of the water column. 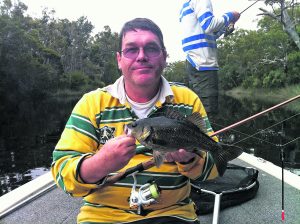 Even the author’s old man, after 40+ years of luring for bass, still enjoys a bit of shrimp under a float action on the bass. 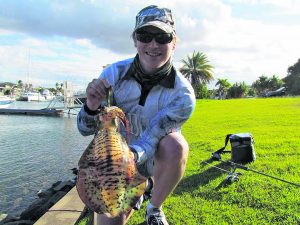 Nothing seems to mimic the darting, fleeing action of a prawn quite like a squid jig – the squid seem to agree. 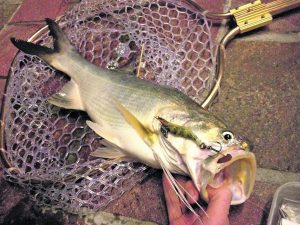 King threadfin are notorious prawn eaters, but can be very fickle when they’re tuned in to a certain bait type. A bit of thinking outside the box with a squid jig from Lachlan Hickey resulted in this chunky little thready. 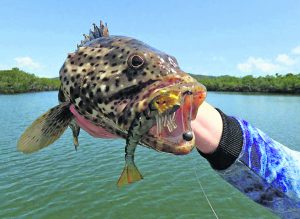 Adding weight to your prawn imitation will aid casting distance and sink rate, which is perfect for working deep snags. 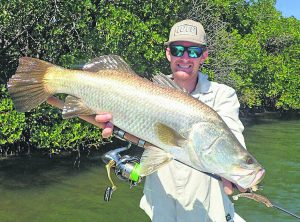 Luke Segalla knows estuary species love prawns and swears by the Squidgy Wild Prawn when peppering the snags in Hinchinbrook. 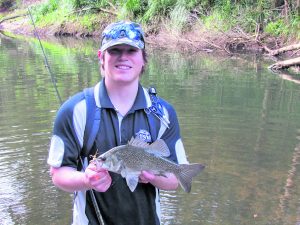 Bass love to eat prawns and shrimps, so the Ecooda Live Shrimp rigged weedless and hopped through dense structure is a deadly presentation.

Finally, species that feed close to the surface such as tuna, mackerel, kingfish, bonito and cobia will usually enjoy a fast-paced retrieve. When prawns are being chased they can really get a move on! Don’t be afraid to really crank that imitation back to the rod tip if you can see prawns under attack and fleeing off in every direction.

Another positive is that many prawn imitations now come in weedless configurations, and these lures can be fished far up into the danger zone. Fishing weedless prawn imitations right into structure is a way to reach fish that were previously unreachable and has revolutionised fishing. On a recent trip to Hinchinbrook Island fishing the many mangrove creeks for barra, mangrove jack, trevally and a host of other northern by-catch, weedless prawns saved us when the tide got too high. As the tide rose, the fish retreated back into the mangroves and our weedless prawn presentations allowed us to hit the areas where other lures and baits would have become stuck.

Early in the prawning

This month, prawns are starting their annual run all along our east coast, and this should continue for a few months. Every system has its subtleties and the prawns won’t always run like clockwork. Anglers who make an effort to gain an understanding of the prawns and predators in their area will see some exciting fishing in the months to come, whether they fish with lures, baits or flies.

Prawns are one of the most prolific bait sources in any inshore and fresh waters and the tackle industry had done wonders for anglers all around the world wanting to catch or imitate these flighty little flickers.

So make sure you soak a livey, cast a prawn plastic or flick a fly into the realm of some prawn-eating predators. You may find yourself hooked into a fish of a lifetime.

Metro mulloway in the shallows

by Bob Thornton • When most anglers think of mulloway, what usually comes to mind is a deep schooling fish, often relating to structure and using the slack tide to feed. What I’m about to […]