After a patchy couple of years, Fraser Island fishing is back! Season after season of small catches, bad weather and weed have turned anglers off visiting the world’s biggest sand island, but after a couple of months of good catches, it might have turned a corner.

Strong southeasterly winds through May and June brought continuous big swell that chopped the beach up. These winds have really chewed out some nice deep gutters and easy-to-find structure around the exposed coffee rock in the water.

However, every silver lining has a cloud and in this case it’s the lumpy beach caused by constant large seas. The headlands at Poyungan, Yidney and Ngkala (as well as Indian Head and Waddy Point) are not drivable on the beach even at low tide, leaving the bypass tracks as the only option. Most of these bypass tracks are relatively easy drives in standard 4WD vehicles but the southern entrance to the Poyungan and Ngkala tracks are worth taking with a bit of extra caution if towing or driving in a low slung vehicle.

It is also worth noting that the beach is the narrowest I’ve seen it at Hook Point, so take the inland road unless you are travelling within three hours of low tide or have a propeller fitted. The inland tracks are bumpy but relatively firm because of their graded base so tyre pressures between 16 and 20psi should see you do the whole island with relative ease.

As always, the humble swallowtail dart has been making up the bulk of light tackle catches on the island. While the average size this year has been small, there have been some solid specimens amongst the schools with fish over 40cm not uncommon. Plenty of people argue the virtues of using pipis to target bigger fish but I still believe freshly caught or live beachworms are your best bet.

The real trick to targeting bigger fish is to find large schools of feeding dart in close-in high tide gutters, and then throw a long cast past them and slowly retrieve. Larger fish hunt along the edges of sand banks for the chance at a better feed rather than move with the smaller school-sized fish.

Whiting have been a bit inconsistent this year, but when they have been on, they’ve been red-hot! While you definitely have a chance at whiting as by-catch while dart fishing, the best strategy to target them directly is almost the opposite.

When fishing for dart, you want deeper, moving water to allow big schools to come in and feed confidently, which usually lends itself to high tide fishing. While you can often fish the very same gutters when chasing whiting, I find the shallow gutters left at low tide to be far more productive. You still want most of the same characteristics as a dart or tailor gutter like a distinct rear sandbar and a pronounced open and closed end to the deeper water, but shallower. As a general rule of thumb, if the deepest part of the gutter is beyond chest height, keep looking for better water.

For chasing bigger dart and whiting on worms, my preferred outfit is a Gary Howard Club Special 11’4” 4 wrap rod, which I find perfect for casting small sinkers a good distance. I pair this with a 55-sized Alvey reel because I like the durability of the sidecast reels and being able to retrieve slowly with your finger on the line is a massive help in feeling the bite.

For hooks, I primarily use the red Gamakatsu Long Shank in a size 4, which is the perfect size for fishing a 40-50mm piece of worm as it can cover the whole shank and just overhang the point by a fraction. I prefer to run a nice short leader (not longer than 30cm) of 8-10lb fluorocarbon. As for sinkers, they are determined entirely by conditions. In flat, calm weather I will regularly fish as light as a size 2 ball sinker because of the sensitivity and feel it allows and in really rough, windy conditions I have used as heavy as a 5 ball.

As a tip, running a small glowbead between the sinker and the front swivel in the rig can be really helpful when fishing light tackle. The reason for this is it stops the sinker resting on the knot while casting, preventing wear, tear and premature knot failure.

After a couple of slow years marred by lousy conditions, it looks like it’s going to be a red-hot year for tailor fishing – provided I haven’t jinxed it! As usual, they seem to be migrating up the coast to spawn and at the end of October they should travel back down south.

Their consistency in travelling up the coast has made them quite easy to find, with good catches between Hook Point and Eurong during May and June; Yidney Rocks and Happy Valley up to the Maheno during July and most of August; and through September we’ve seen the bulk of the schools sit between Indian Head and Ngkala Rocks. Fishing is banned from 400m south of Indian head to 400m north of Waddy Point between 1 August and 30 September, so most anglers travel between the two headlands and further north to score big in the closed season.

A foolproof method to locate big schools of tailor is to find good water – usually deep gutters full of fast moving water. A gutter with an obvious exit or drain is preferable but not necessary, as these fish will happily travel over sand bars to find food.

Finding bait is sometimes more difficult than finding gutters but it can be just as effective in pinpointing tailor. In the same way that a flat spot between waves or a darker patch of blue can indicate a gutter, there are plenty of signs that can indicate a bait school is getting balled up by tailor. Sometimes on days with high swell, the waves will actually be tall enough to spot baitfish in, and if you’re lucky you can even see them jumping! If you can spot gulls and terns diving into the back break or disturbed bits of water where there isn’t current, there’s a fair chance some little baitfish aren’t having a good time.

The easiest way to catch tailor is to use a pilchard rigged on a set of gang hooks. In the past 4/0 has worked well, but the pillies have been bigger than usual this year so don’t hesitate to size up. I like to use a set of 4×4/0 hooks joined by rolling swivels and 40lb fluorocarbon leader. Using 4 hook gangs allows you to run a smaller hook than you would usually need to reach the tail end of the pilchard (where you get all the bites.) Eagle Claw Kendal Kirbys are my favourite hooks for this kind of fishing, as they’re strong, non-brittle, sharp and made in the USA as opposed to a lot of the competing brands that are manufactured in China. Shogun number 5 rolling swivels suit these nicely.

To throw this kind of rig, an ideal outfit would be a sturdy 13’6” rod with an Alvey reel 650 size. I personally use a SnyderGlas Mag Surf but other manufacturers like Gary Howard and Live Fibre make some great rods too.

As much as lobbing in a bait is a pretty safe bet, it’s not the only way to skin this cat. Tailor are one of the most responsive fish to lures that you’ll ever come across and spinning is a more than viable way of chasing them. Casting and retrieving a lure often lets you cover a lot more ground than bait fishing and can be a great way of searching for schooled fish.

A lot of fishers are hesitant to try spinning in the surf, often because of the presumed effort involved. To be fair, if you plan on spinning with an Alvey reel and a fiberglass rod, it is a lot of effort for a poor result. However, with appropriate tackle lure casting can actually be less strenuous than bait fishing. 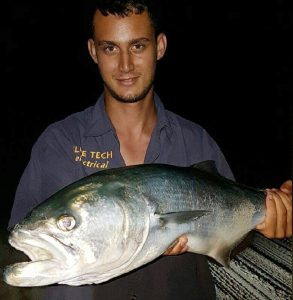 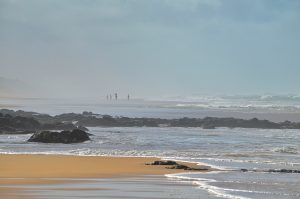 Some of the exposed coffee rock at Poyungan reaches all the way to the water at low tide. 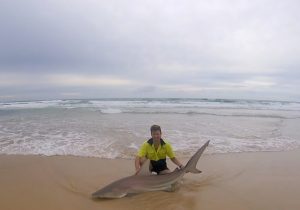 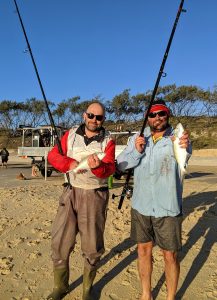 The Hannah Brothers bagged a couple of school-sized tailor from Ngkala Rocks. 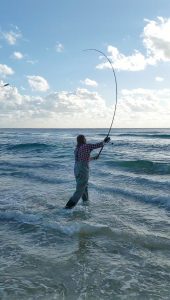 With good gear, lure casting can be a lot of fun. 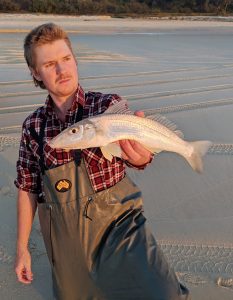 Big whiting are worth the early start. 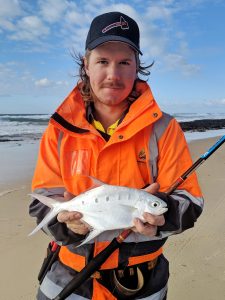 The author with a solid swallowtail dart from a back gutter.

As discussed earlier, a bait fishing outfit for tailor is a long, hefty outfit, made for throwing a good-sized sinker a long way. Because a lure rod isn’t made for throwing weights nearly as big, it looks very different. Rods around 11’ are the ideal blend of lightweight with decent casting distance. So far the best combo I have found is an Assassin Amia Zero 11’ PE 1-2 paired with a Shimano Stradic 5000XG and 20lb braid. A compact reel with a high gear ratio is a real asset here and durability and lightweight is key. Braided line is an absolute game changer when it comes to casting distance, and those gains in distance translate directly less effort behind every cast.

From social media, anglers are clueing in to the fact that there are lot bigger things than tailor cruising the gutters off the eastern beach. Mulloway, sharks, giant trevally and Spanish mackerel are just some of the many species that are well and truly targetable with your toes in the sand. The primary way of targeting these impressive fish is slide baiting.

While mulloway have been relatively slow this year, chasing other fish interested in tailor has been very productive, with some great Spanish and GTs landed consistently. The easiest way to find your dinner is by finding your dinners’ dinner, which in this case usually means fishing the deeper channels behind big schools of tailor or dart with a live one. Get out there and go fishing!

Mulloway: we will fight them on the beaches!

by Peter Fullarton • Mulloway can be caught in a number of environments such as estuaries, rivers, bays and offshore, but one of the mulloway’s favourite hunting grounds is the ‘surf zone’. Chasing them in […]

Spinning the surf for salmon

by Jarrod Day • Catching Australian salmon might not be everyone’s cup of tea, especially when they are predominantly caught in winter along the surf beaches of Victoria. Each year before the onset of winter, […]

The rewards of fishing at night

by Sean Thompson • Night fishing creates a sense of mystique among anglers and is loved as much for its old-fashioned charm, as its exciting adventure and possibility. Spots that might otherwise offer only average […]