Golden perch fishing in summer is an iconic Australian pastime. It is synonymous with cool swims to avoid cooking in the heat, and avoiding the midday mercury peaks with shady retreats and cold drinks with a rapidly melting ice supply. Yellowbelly and humans treat summer the same way: you get your business done early before the heat, seek shade or cool areas during the day, and make time to catch up with mates. Yellowbelly just love schooling up during summer!

Yellowbelly are a main target of inland anglers, and are best targeted from spring through to autumn. Their behaviours and seasonal activities can be tracked over a season, changing as the breeding cycle progresses.

Let’s start with the pre-spawn activity in early spring. At this time of year the yellowbelly like to spread out on banks and shallow flats to feed up, and to refuel their solar batteries after the chill of winter. This often results in an early season edge bite that becomes progressively better throughout the day. The timing of this bite is largely determined by the winter just gone; warmer winters will produce earlier pre-spawn bites.

You can find these fish with a sounder, and likely haunts include off prominent points, creek convergences and islands. The yellas will present as spread-out, isolated fish sitting high in the water column or perusing the bottom in the shallows. Working edges with blades, soft vibes and lipless crankbaits using a slow retrieve is best. I like Atomic Hardz Vibs in dark to natural patterns such as black beauty, ghost wakasagi and Tristo’s eagle.

As spring progresses, yellowbelly will turn their attention to spawning. They will congregate in key areas to commence breeding, and will exhibit hormone-fuelled aggression and territorial behaviour.

Following the spawn, the fish will once again spread out to various areas. They will often load up on trees or other deep landmarks to escape the heat, and recover after an embattled breeding season.

The spawn bite, commencing in late spring or early/mid summer, can provide some sensational golden sessions. Water temps are usually high, up and over 30°C, which pushes the fish deep to around the 20ft mark (6m). In rivers, these fish are best targeted in deep holes corresponding with river bends, where flood forces wash-out river bases to provide deeper water.

These fish will respond better to more energetic, aggressive presentations. Large, rattling lipless crankbaits around 70mm are a standout. Lipless crankbaits can be fished at any depth, making them a versatile option.

Soft vibes fished through schools account for many cricket-score sessions during spawning. If you can identify a spawn point, hold there and hop soft vibes across the bottom; this works a treat in muddy or weedy areas. Larger presentations compensate for the less aggressive retrieve, and I opt for the 75mm Semi-Hardz Vibs. Brighter patterns will attract more attention, and a kill-and-burn retrieve will draw aggressive bites from interested fish. Avoid slack line during pauses, because the ‘grab, shake and leave’ bite will cause you to miss a lot of fish without an active hook-set! 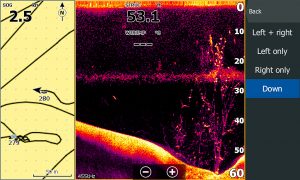 When you’re looking for trees to target later in the season, the fish will show up as bright dots, or ‘footballs’. 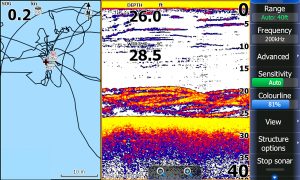 A prime example of schooled summer yellowbelly. Sitting in 26ft of water, these fish were targeted with dark coloured vibes. 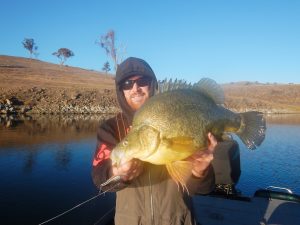 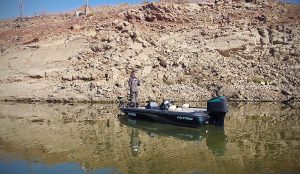 Fishing parallel to steep banks will allow you to keep your lure at the right depth. 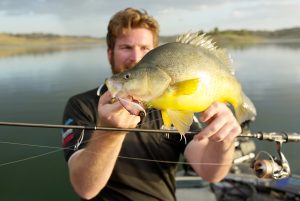 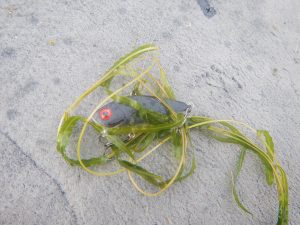 Weed! It can be a nuisance but it often holds fish. Find the weed edge and stay there. 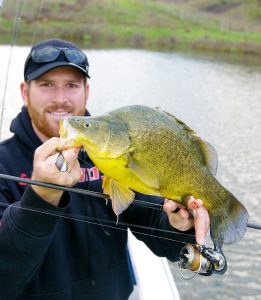 A good way to get your first fix of post-winter gold is to search grassy banks early in the season with small profile lipless crankbaits.

Late summer and through to autumn is the post spawn phase. It’s often not associated with aggressive bites and productive sessions, so a more calculated approach is needed for memorable days on the water.

Sounders are an invaluable asset because you will want to identify fish-holding structure and target those areas exclusively. Standing timber or laydowns in rivers are the primary target structure, and a good scanning unit will eliminate dead water.

One of the best approaches is a vertical soft plastic presentation. Fish will often hold in deep water between 15-40ft (5-12m), and the technique involves dropping a lightly-weighted soft plastic to the bottom and retrieving vertically through the suspended fish. I have had good results on 1/6-1/4oz jigheads with 2-4” curl or paddle tail plastics in dark colours. In dirty water, or in the case of a horizontal retrieve in rivers, adding a beetle spin or swapping over to a lipless crankbait will increase your catch rates.

In dams, golden perch will school up at areas with particular landmarks or features. Look for a large area of water at their desired depth, a source of food and cover such as weed beds, typically those with easy and safe access such as an adjacent creek bed or gully. Local knowledge or Google Earth can be helpful in identifying prominent points or submerged creek junctions in a dam or river.

A good sounder is helpful but not essential. Jumping between likely haunts until one produces repeated fish can help cut out dead time on the water. If you’re using a sounder, you should spend some time identifying submerged humps, creek beds and gullies. You’ll find that fish will regularly return to the same area each season.

Aggressive goldens will hit just about anything. When the bite isn’t crash hot, however, you may have to experiment with different approaches. Early during the spawn, and during the middle of the day, I like presentations that can be fished tight to the bottom, such as vibes and blades. Natural or black patterns work best during these times, fished with slow retrieves, such as dredging or hopping.

During aggressive sessions, such as a changing barometer, evening bite or summer storm activity, I’ve had great results on 60-70mm vibes. An erratic kill and burn retrieve is effective and also a lot of fun, if you like hard-hitting strikes!

Fishing open spawn areas lends itself to spinning gear, with long casts more important than accuracy. Here is the tackle I use for different lure types.

Trick a trout in a New England stream

by Wayne Kampe • Set on a vast tableland with trout waters stretching from around Glen Innes to the north, Tamworth to the south, north east to Dorrigo and then to the southeast Walcha area, […]

by Mark Gercovich • There are many reasons why some fish are popular angling species: some taste good, some look good, some fight hard, some are hard to find, or some require specific angling dedication. […]