After hundreds of boat tests, we finally made it to Coffs Harbour to get some hulls wet. Hosted by Dayne Taylor and the team at North Coast Boating Centre (NCBC), it’s definitely a part of the world that offers lots – not just for fishing but also a compact array of conditions to test the abilities of hull and motor combinations.

NCBC is a Formosa and Suzuki dealer and both come from South East Queensland – the hulls are manufactured there and Suzuki’s local head office is also located there.

Although the quality of the main Coffs Harbour boat ramp is a bone of contention amongst locals, on the test day it coped fine with the launch and retrieval of a black and grey 5.5m Formosa Centre Cab, loaded with features and turning heads with a new Suzuki 150 bolted to the back.

“The locals here love the Formosas and we sell plenty of them” said NCBC’s Dayne Taylor. “We always make sure that we order boats with the features that local anglers want.”

The 550 is the smallest Centre Cab that Formosa make. With models extending up to 7.4m in length and the simplification of the Formosa range (these SRT hulls were released on the 2019 boat show circuit), navigating their line up has become a lot easier.

There’s a surprising amount of room in the centre cab, as much as in some 7m models that I’ve tested in the past; however, the flipside of that is the front deck space is compromised in this model. If front deck space is important to you, check out the longer models in the line up.

Exiting the ramp, there’s a fair expanse of semi-sheltered water that we could use to do some speed runs in. Although the specs show economy of 2km/L, I’m sure that with more granular metering this would actually register in the low 2s.

It’s no slouch either, with a flat-water test yielding 74km/h. Unfortunately, conditions didn’t allow us to run at wide open throttle on the test day – that was a quoted reading from the team when they were prop testing in the local river.

Creeping out of the harbour, the calm day belied the decent ocean swell that rolled through. Indeed, it was fun to do a few jump shots off the colourful south wall. Sneaking up along the coast, we took the opportunity to do some running and fishing shots in the slop. You can check these out by watching the video at the bottom of this page.

The other compromise in this boat is stability versus ride. With a near 2.5m width and the four-tube Quad4 water ballast system in play, the hull was rock solid in the water. Even with 19 degrees of transom deadrise, the hull tended to ride over rather than through the swell. Add a deeper vee in the hull and you would lose stability in favour of a smoother entry to waves. It’s the perennial boating dilemma.

Otherwise, the boat is well finished and definitely turns heads at the ramp. Its practical features, such as the removable underfloor kill tank, an entirely practical transom and transom door coupled with a folding bench seat that redefines simplicity shows that this rig has been designed by anglers – or at the very least, by builders who listen to their customers.

Want to find out more or go for a test drive? Call Dayne and the NCBC team on (02) 6655 7700 or look them up on www.northcoastboatingcentre.com or North Coast Boating Centre on Facebook.

Price wise, this rig is right in the ballpark for those looking to move into a plate boat and not have to sell the house to do it. As tested, this rig comes in at under $60,000 and if you want to drop to a 140hp outboard, you can shed another five or six grand again. 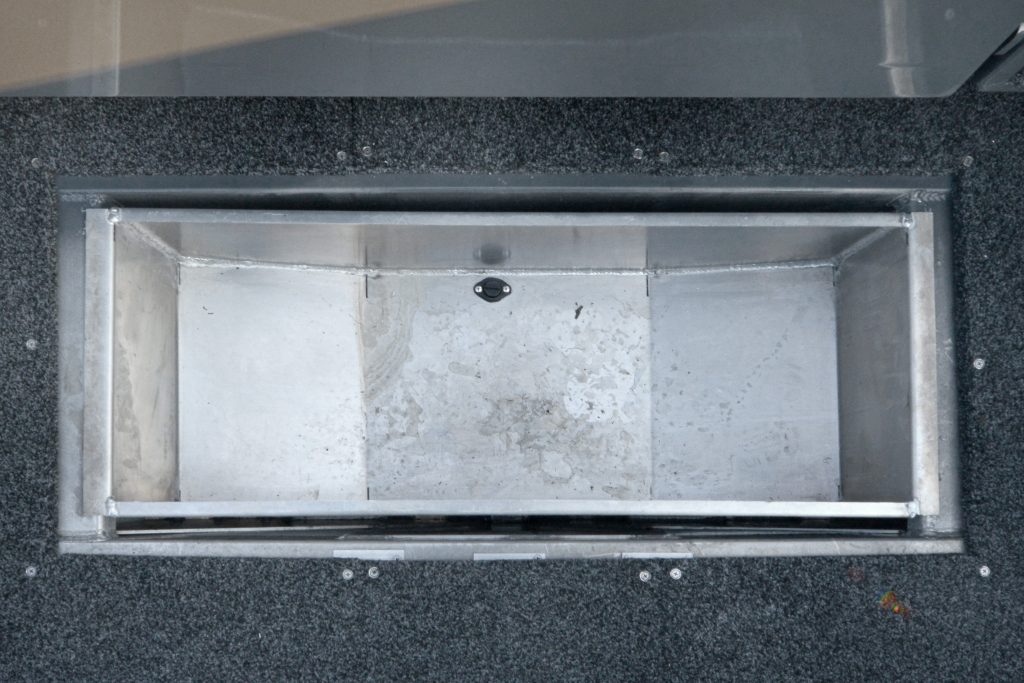 We’ve seen plenty of kill tanks under the floor of boats, but this one is removable. 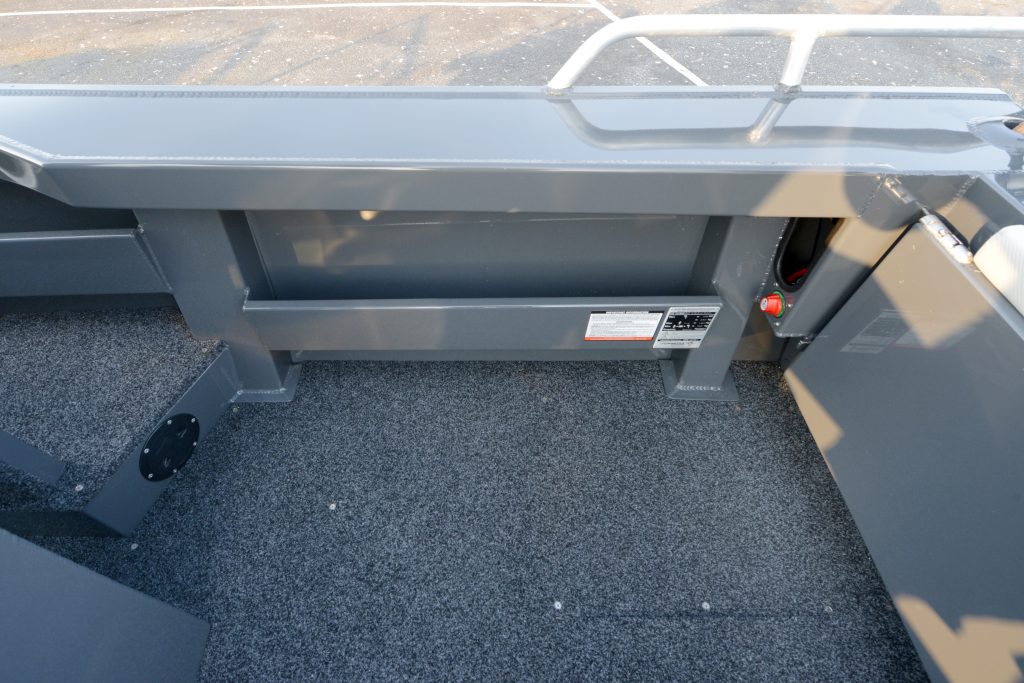 Side pockets are short but feature room for your toes underneath them and a high gunwale to keep you in while out in the ocean. 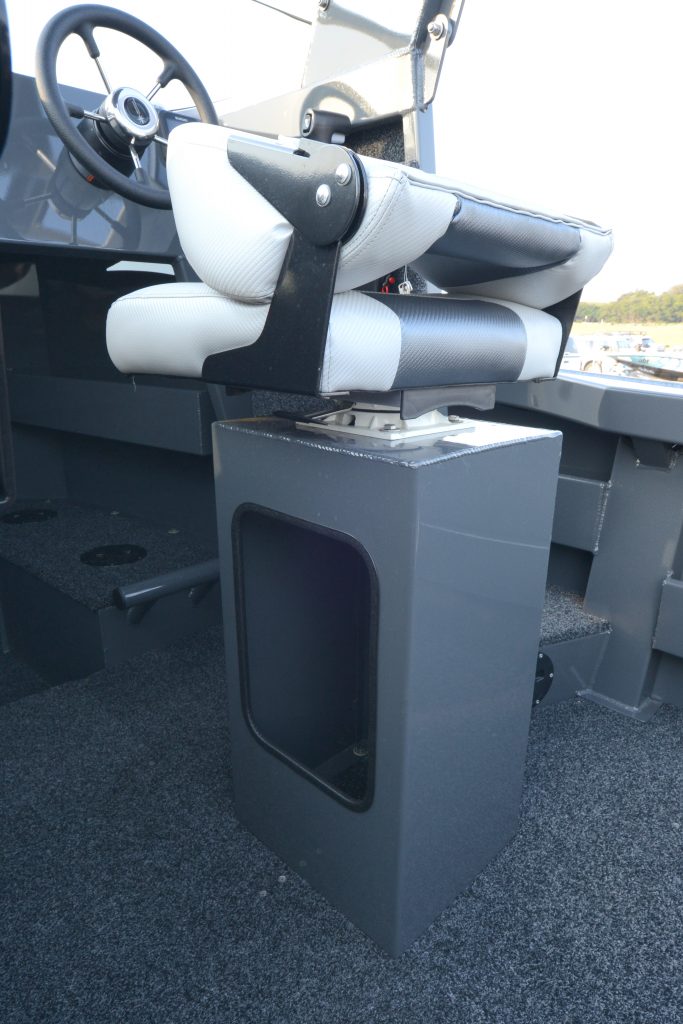 Although basic, there’s plenty of storage room in the seat pedestals and simple foot bars. 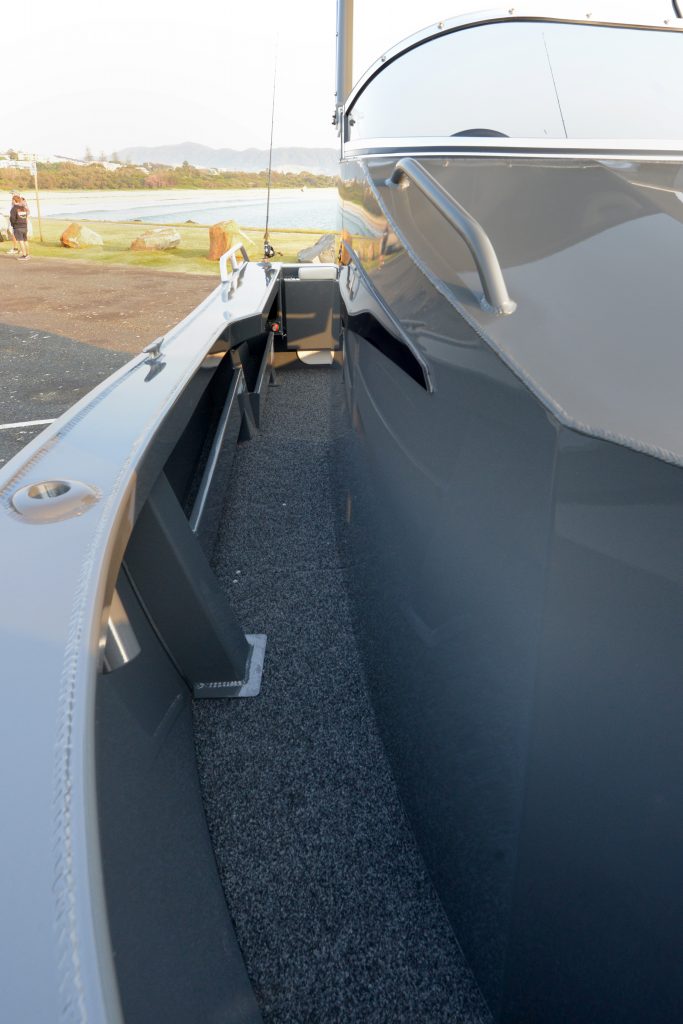 There’s ample room to shuffle around the centre cab and the deck remains the same level all the way around. 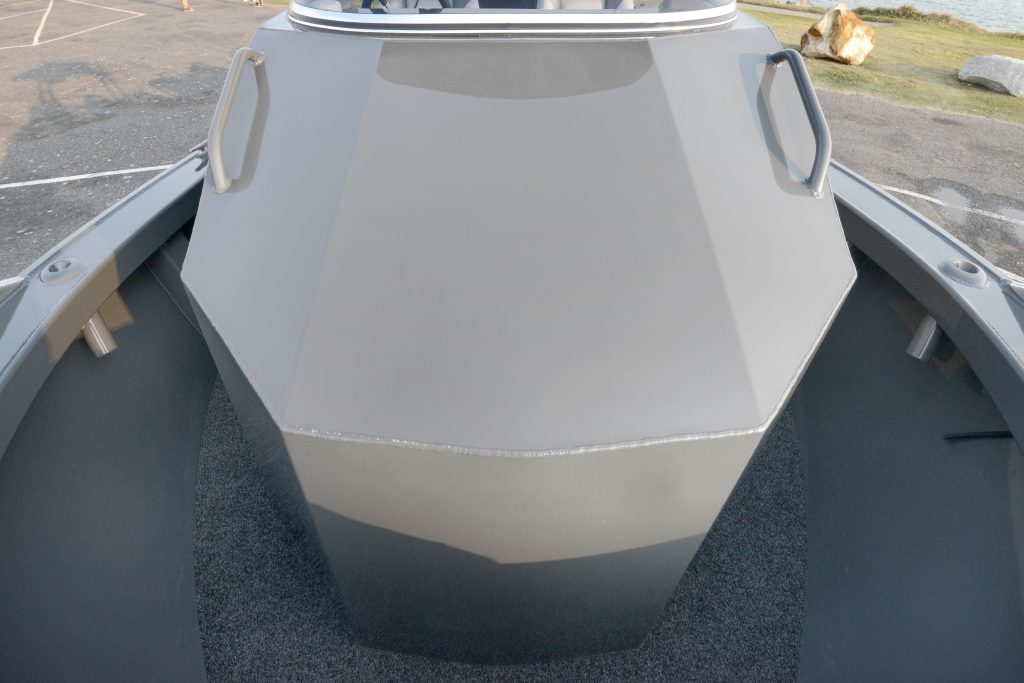 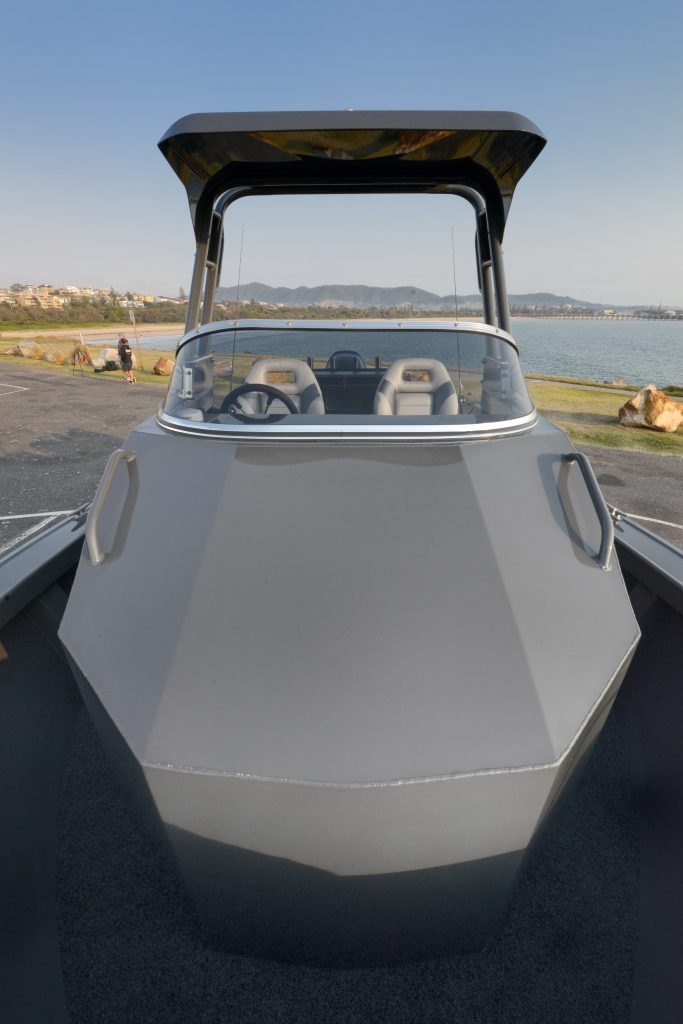 The short windscreen is in the ideal place – you can look through it while seated and over it while standing. 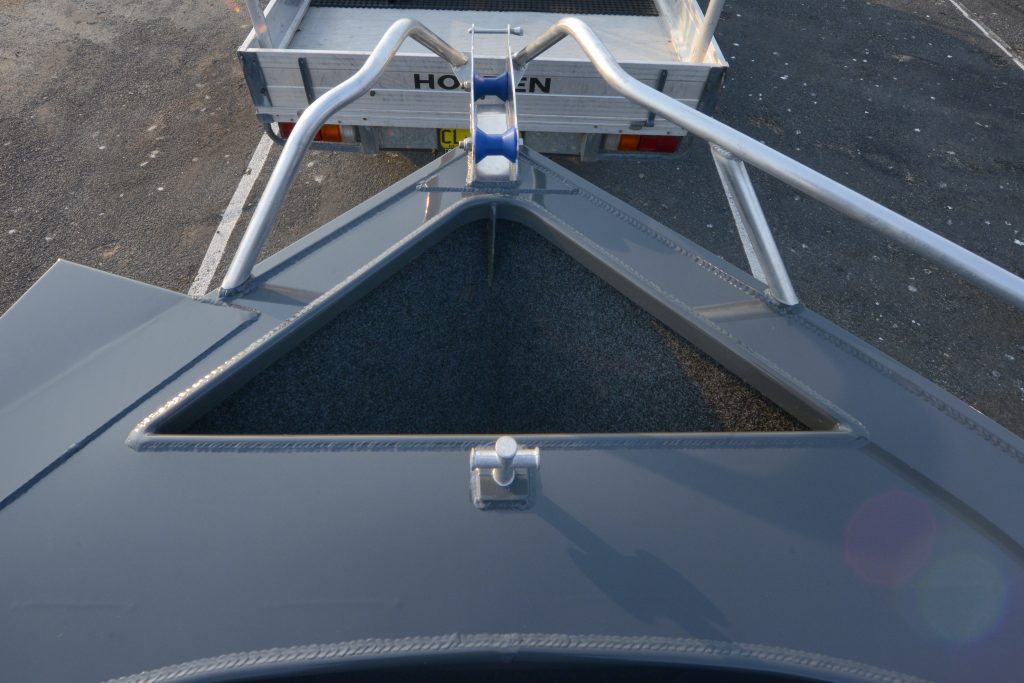 Next to the anchor box there’s an electric motor mount. Either a self or standard manualdeploy would work, as you can easily access the mounting area. 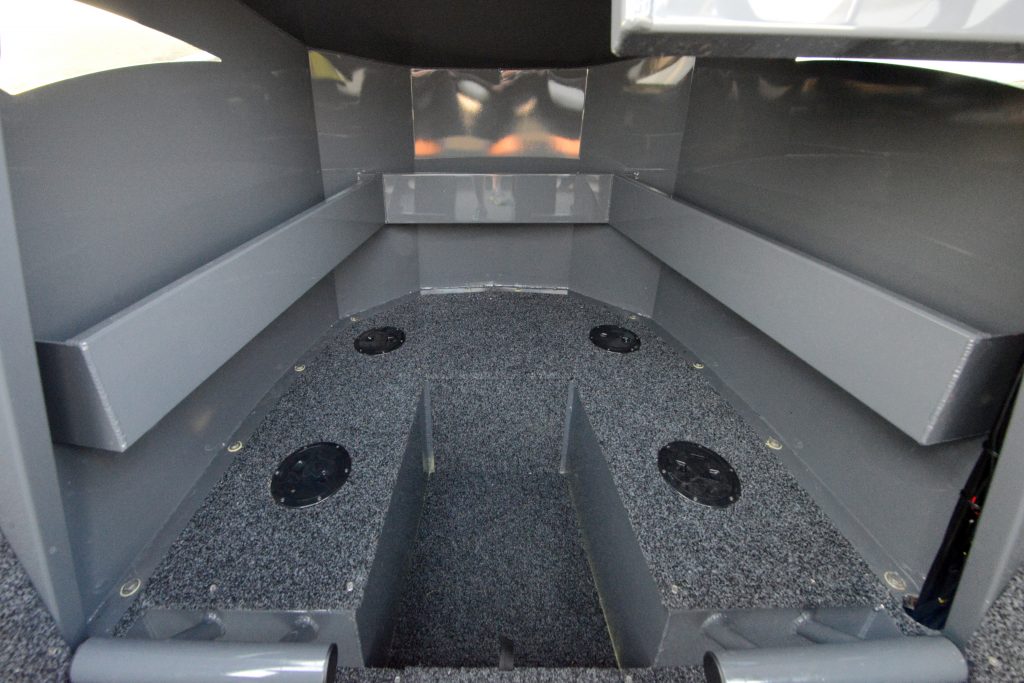 There’s more room than you think in the centre cab, with plenty of space to get out of the elements when things get hot and nasty. 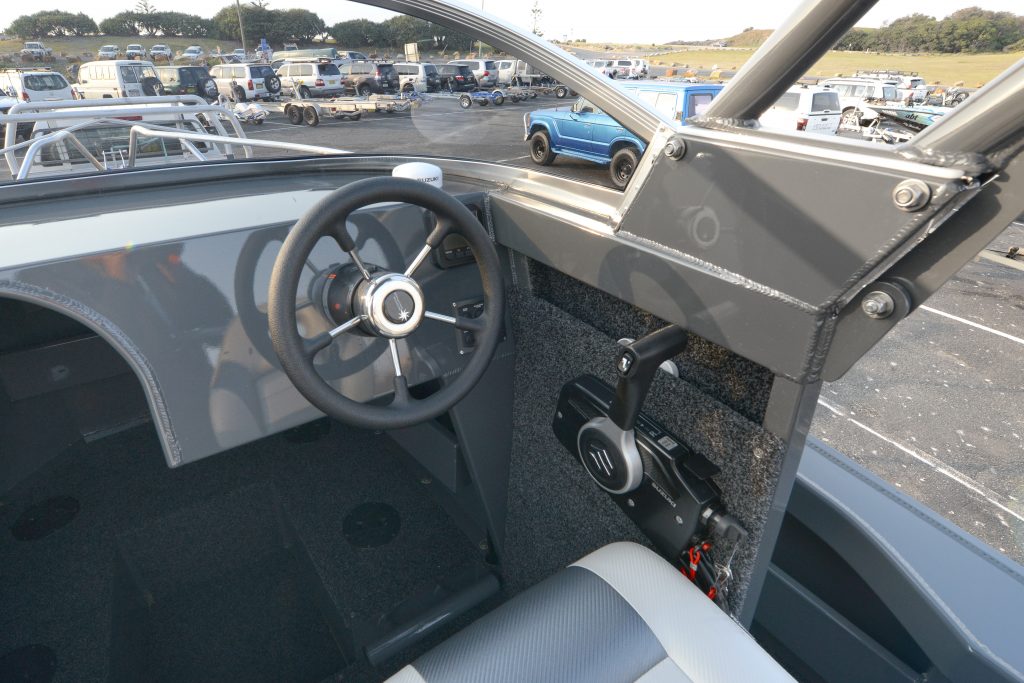 The helm is simple and although the throttle box initially felt a little cramped, it offered plenty of places to support the throttle hand while varying revs in lumpier water. 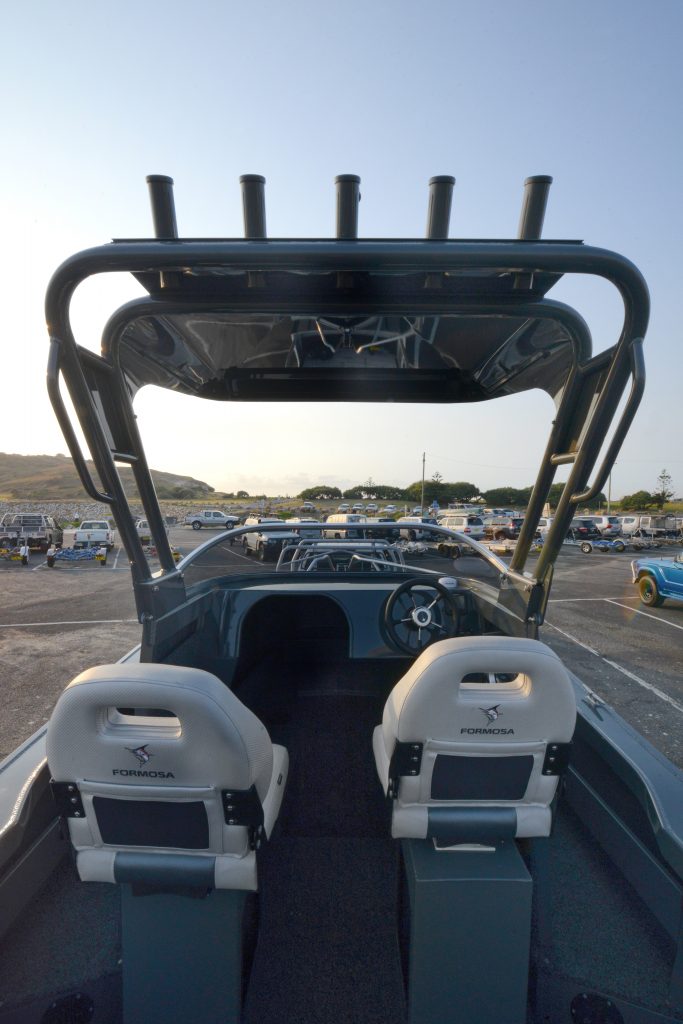 The hard top offers shade for driver and passenger and accommodates a handful of rods up and out of the way. It folds down for garage storage. 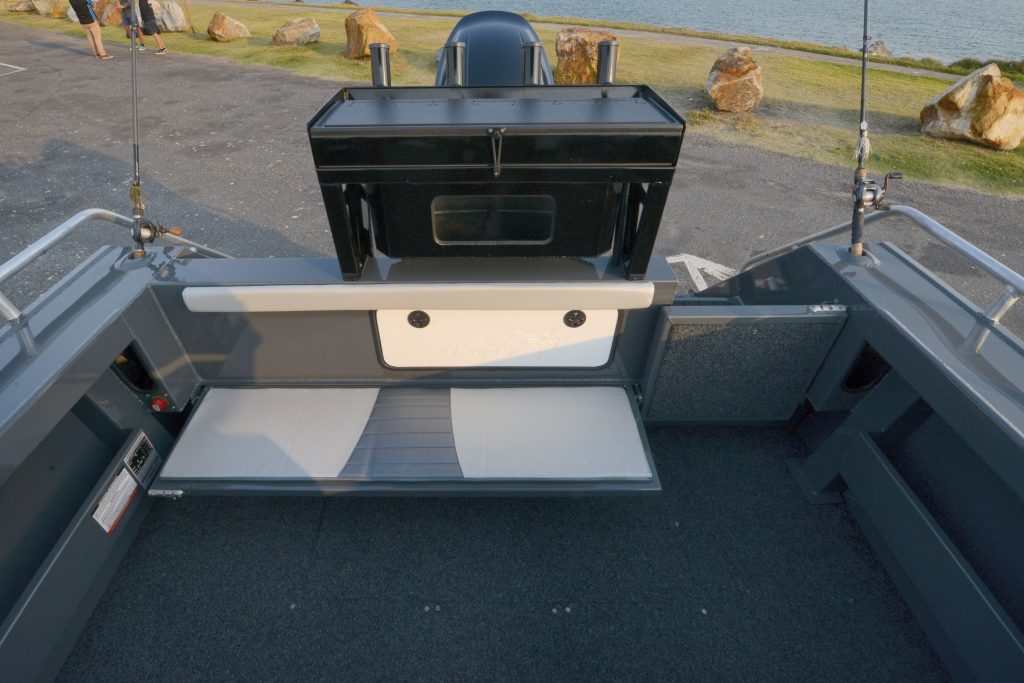 The fold-down rear bench seat is a neat and practical solution – with no fold-down legs required. 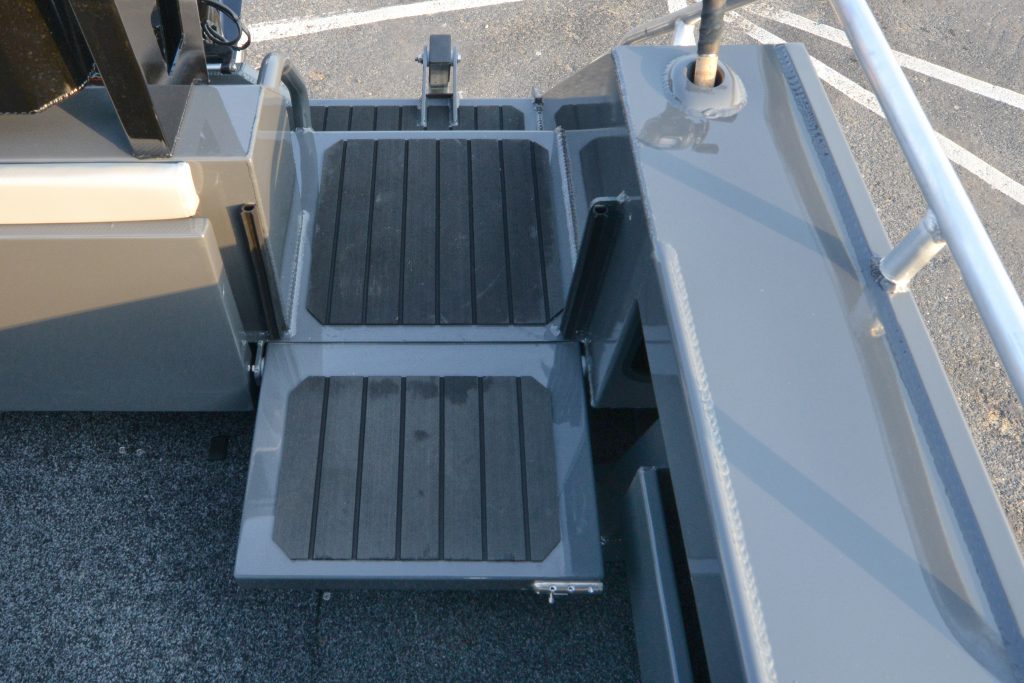 The transom door folds inwards and forms a step to give access to the Active Transom. 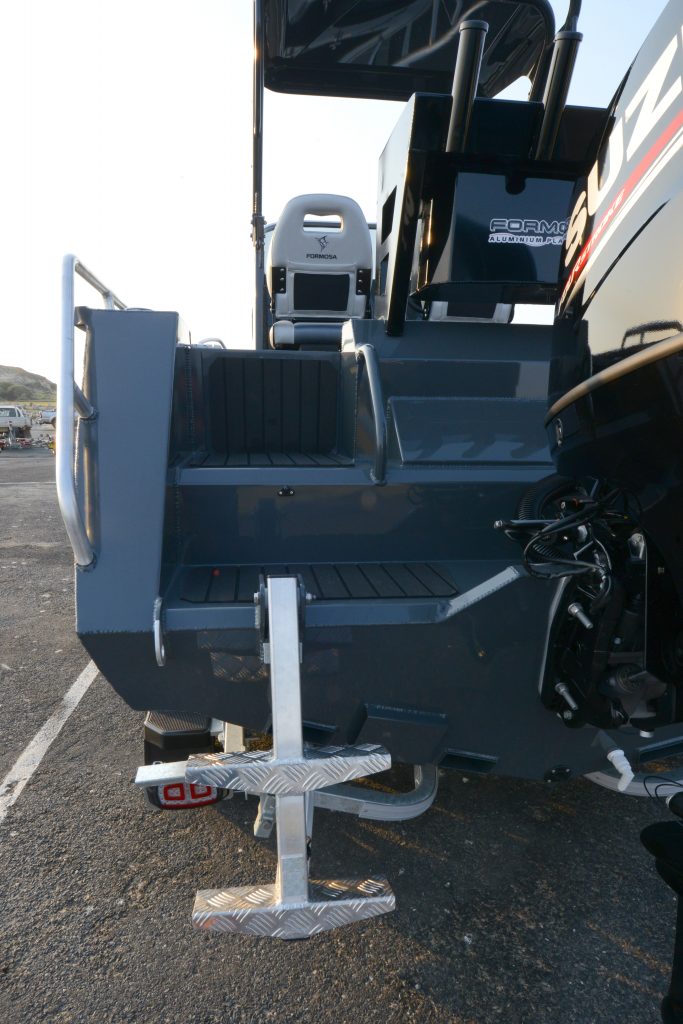 Egress is easy on the trailer with the fold-down aluminium steps. 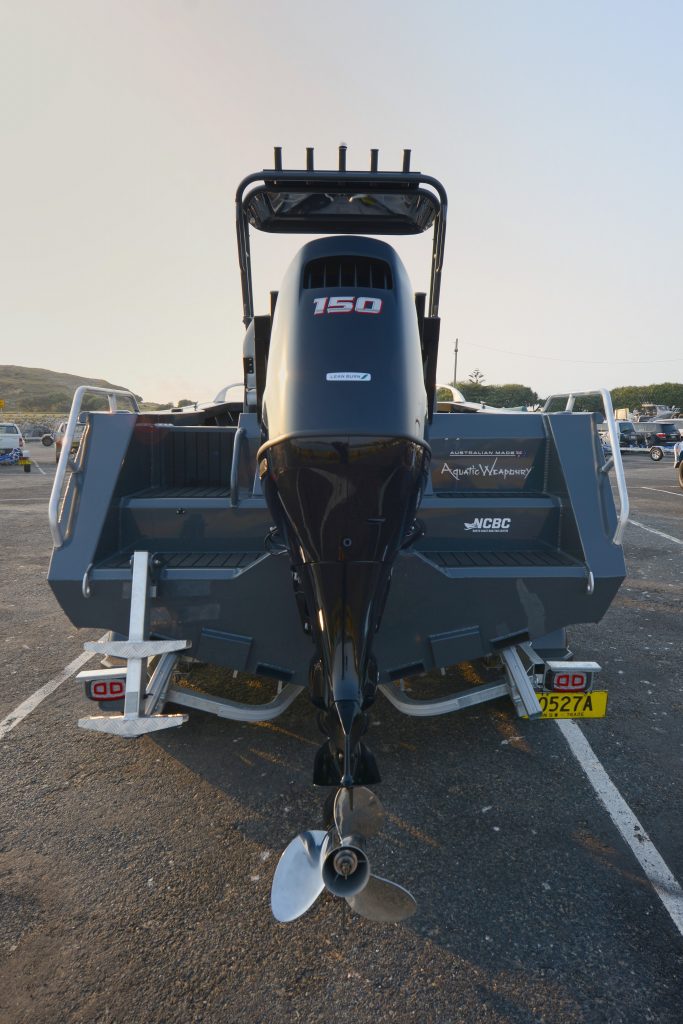 The new Suzuki 150 is an EFI double overhead cam, 2.8L inline 4-stroke that throws this centre cab up and out of the water.

Two smaller Stacer boats with a lot to offer

by Peter Jung • Testing boats for the magazines can at times be hard work. Poor weather can affect our ability to get a feel for how a boat performs, time limitations also prevent us […]

by Steve Morgan • We hope for windy days while boat testing, but not at the speed that Port Phillip Bay dished out while testing this Haines Hunter 585R (runabout), fitted with a Yamaha F200 […]