I have found myself fishing more and more small dams around NSW for one of my favourite freshwater sportfish – Australian bass. This is partly because over the last few years, Fisheries has stocked a number of smaller waterways with these little bronze warriors, and they are now reaching a good size.

The other reason why I have been focusing more on smaller dams is because it’s possible to cover the whole dam in a day, letting me give it a thorough working over. This simply isn’t possible at locations like Glenbawn or other large dams.

However, my change in focus created a significant problem. My regular kayak is excellent but it’s ill-suited to the types of dams I am now focused on for bass. The yak is just too big. This became apparent after one particularly memorable session during which I hooked onto a big bass using dropshot tactics, only to lose it after it dived for a root ball in the centre of a partially submerged tree. I simply didn’t have the maneuverability to get in close to the snag and get the fish out.

After this frustrating experience, I went in search of a kayak suitable for these sorts of tight snag battles. After I found the kayak I wanted, I spent the next few weeks developing my dropshot fishing, which is well suited to small dam bass fishing. Here are my experiences.

I ended up choosing a Native Titan 10.5 for my small dam bass fishing. The Titan is very different from my old kayak; my previous yak was slim and long, and the Titan is wide and short. Those proportions make the Titan perfect for fishing in small dams packed full of snags. I got a rudder upgrade so that I could turn almost on the spot, but apart from that the Titan didn’t need any modifications. It’s very stable and remarkably quick off the mark as well as on the plane.

It took a few sessions to work out that I could employ some really cool tactics when fishing from a smaller craft. Being able to fish almost over the top of a heavy overhanging snag while standing up meant that I was able to use a technique successfully that had previously been almost impossible (for me anyway!) from my other kayak: dropshot.

This technique involves a length of fluorocarbon (about 20-30cm), followed by a dropshot hook, followed by another 20-30cm of fluorocarbon and ending with a splitshot sinker. Attached to the hook is a small soft plastic, which can be vertically jigged (gently) up and down within the deepest pockets of the snag. The front of the Titan is shorter than my old kayak and because of this, I can jig the snag, hook the fish and work the fish out of the snag because I’m standing directly above the fish as opposed to sitting where the fish can create an angle and brick me.

A dropshot rig can also be effectively fished along the edge of a likely snag by using a continuous retrieve where the lure is subtly bounced along the bottom back to the angler’s position. A dropshot rig can be fished very subtly, and is suited to tiny twitches that can be inserted into the retrieve by adding short, gentle wrist movements as you wind the reel. The idea behind this retrieve is to make the lure look like a fish hanging in the water which, to a hungry bass, is almost irresistible.

Further, a dropshot rig is a very adaptable rig and this is important when you are bass fishing from a kayak. You do not need to be swapping between lures (and rods and reels which crowd a kayak) to find the depth at which the fish are feeding. With dropshotting, you can simply move the sinker up or down the line to change the depth at which the plastic sits. This makes it very easy to fish the entire water column with one rig very effectively and, in turn, find the bite. 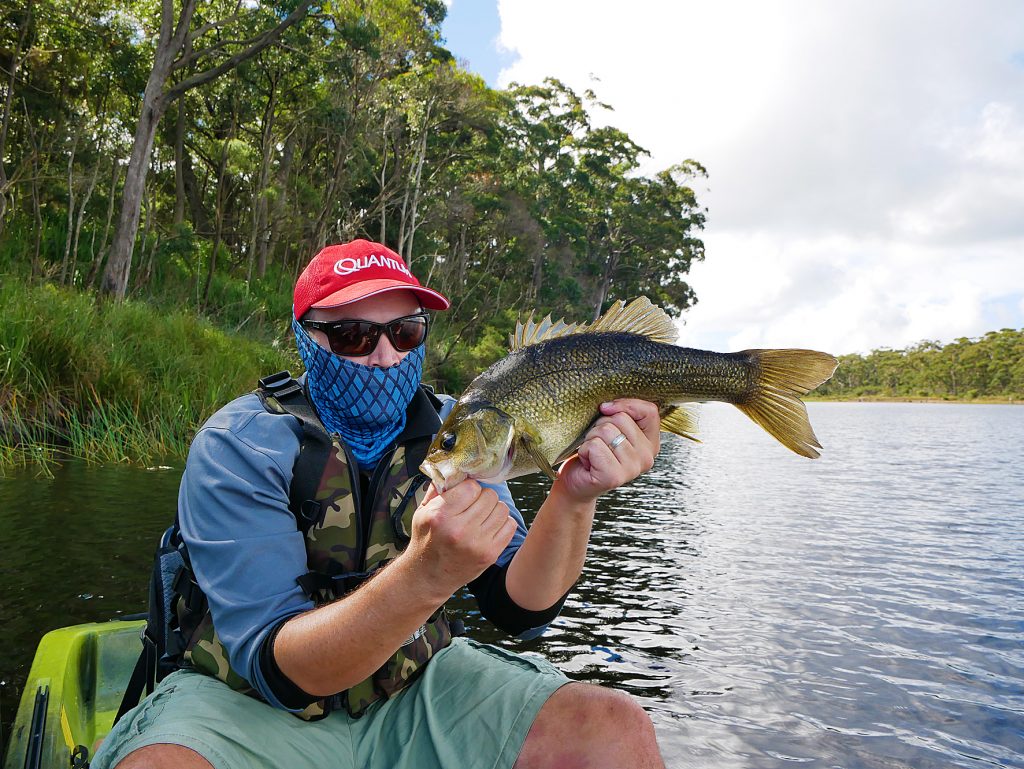 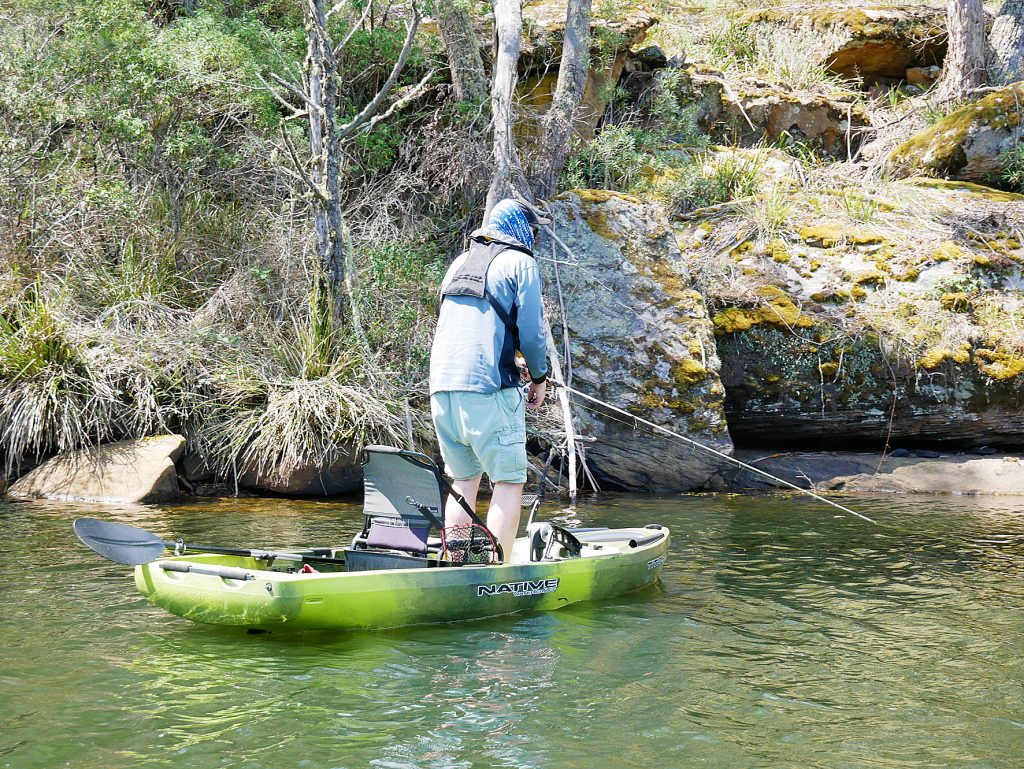 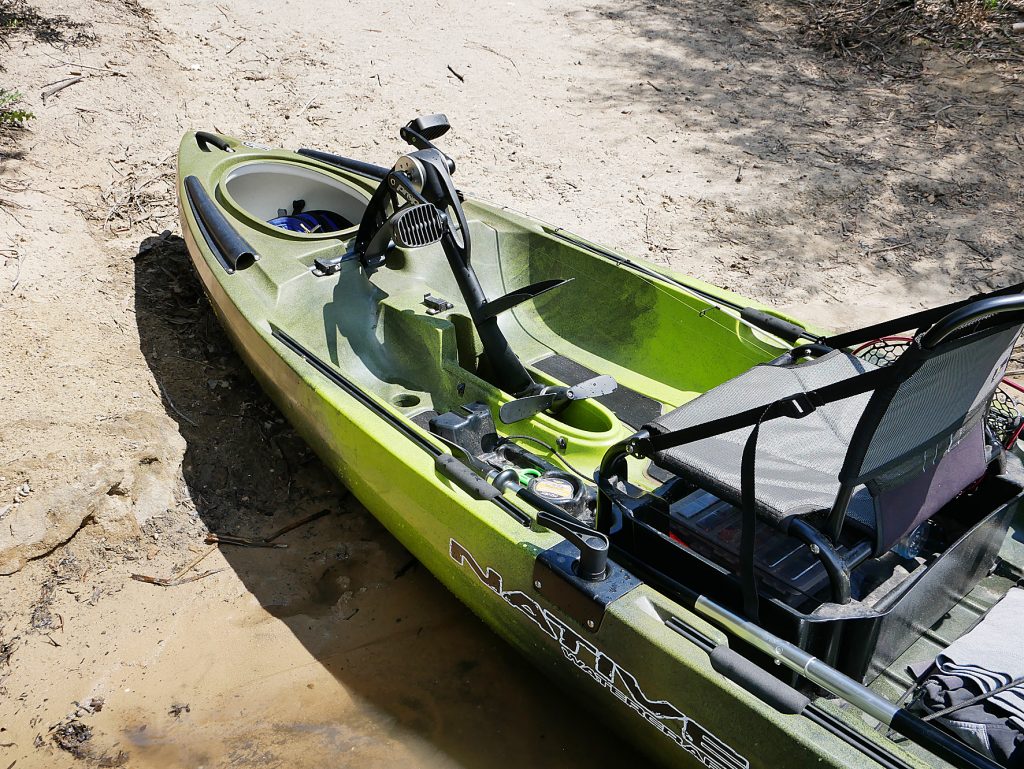 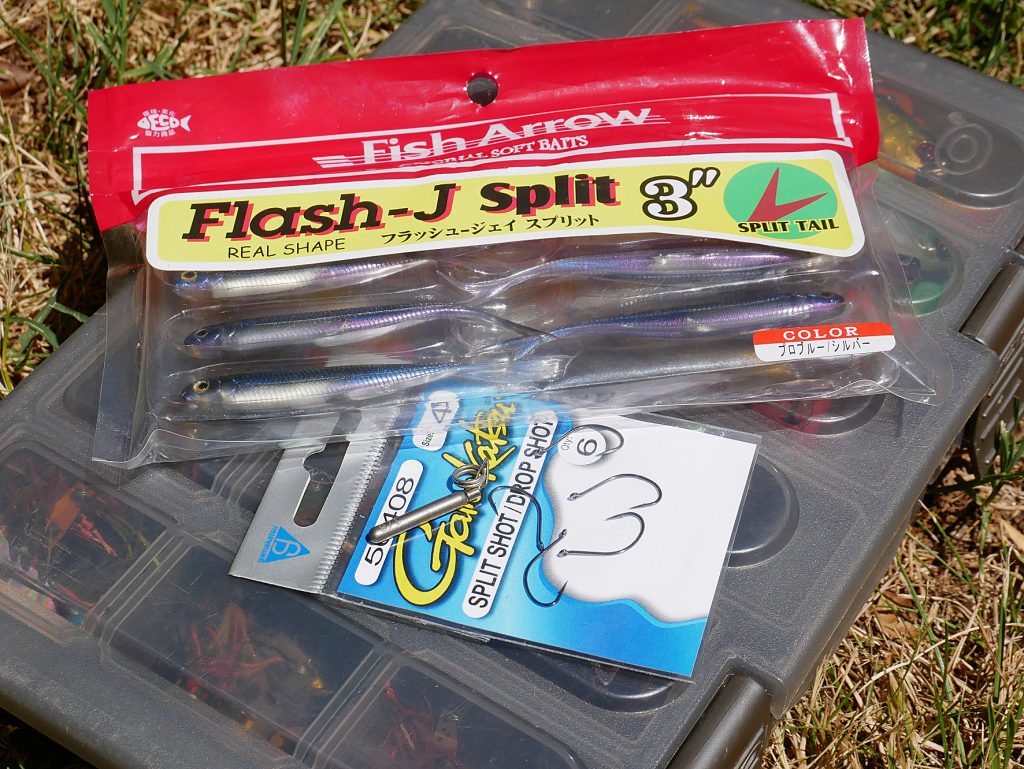 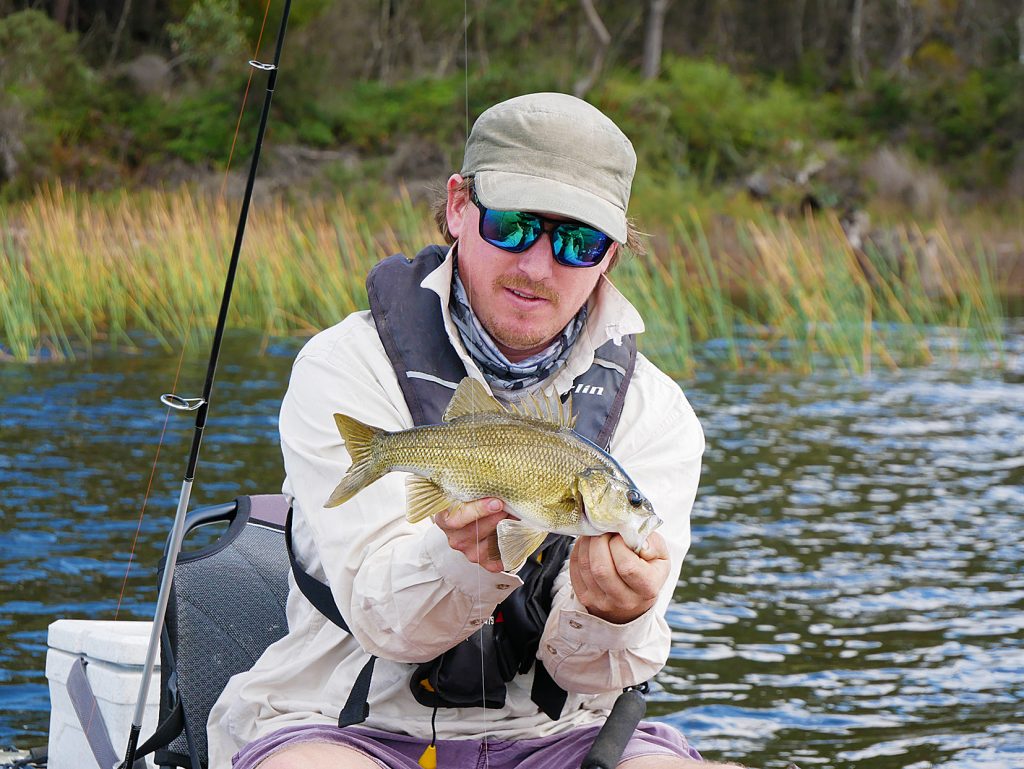 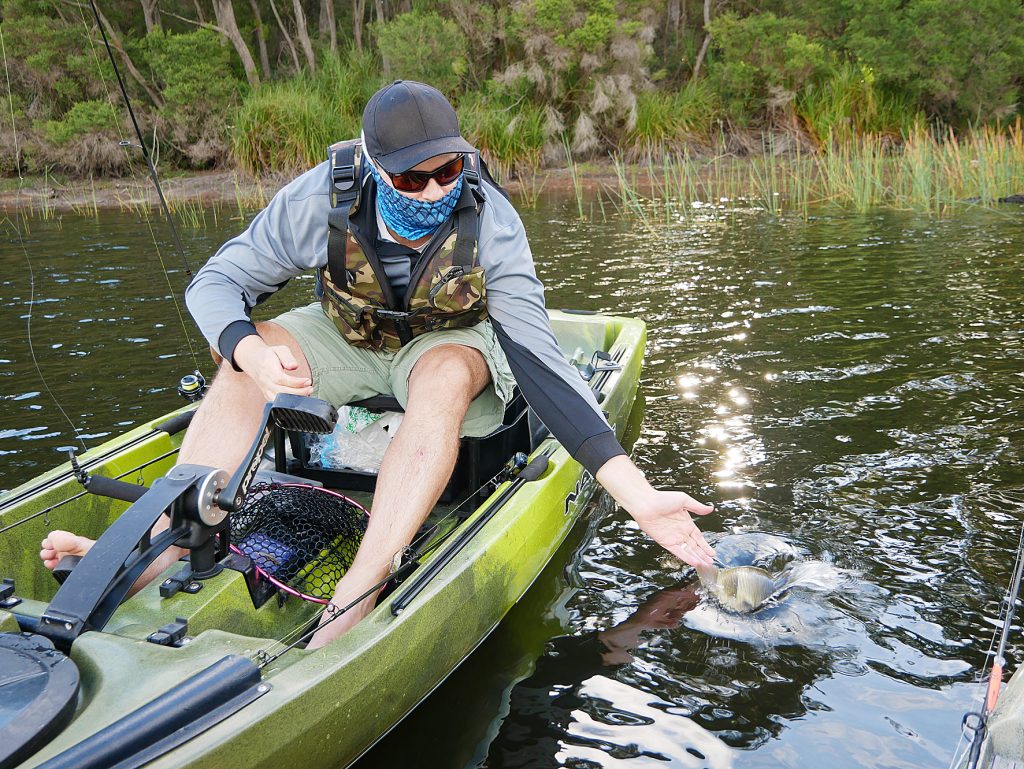 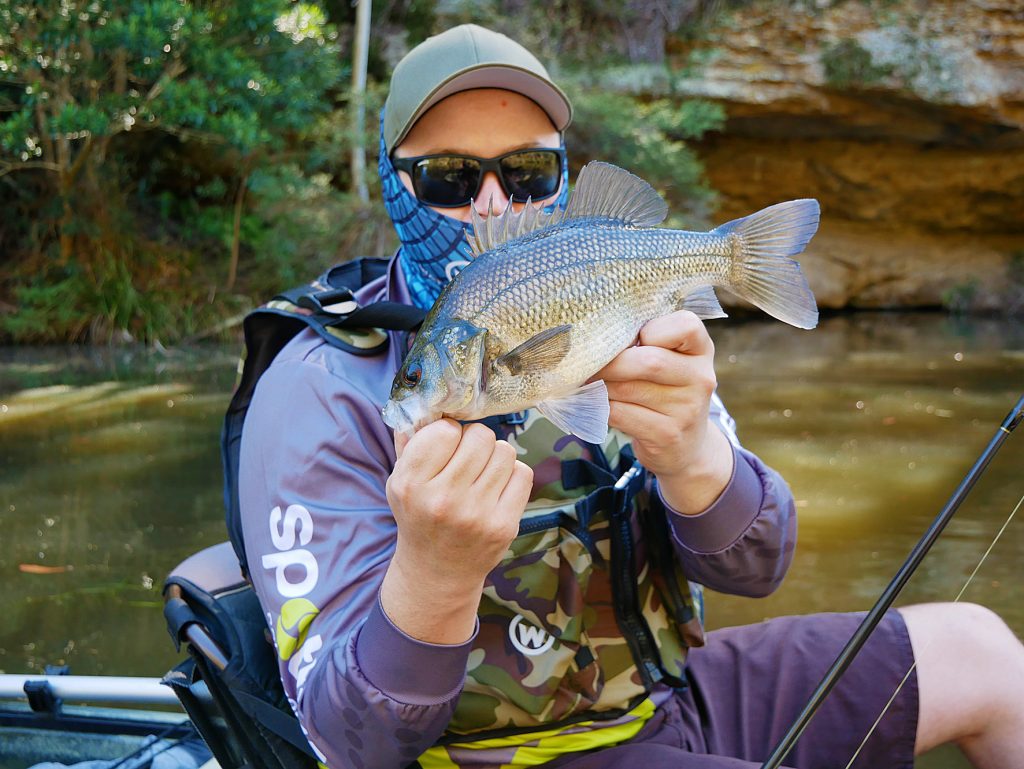 There are specialist sinkers and hooks for dropshotting and they aren’t cheap, but in my opinion they are well worth the investment. Dropshot hooks have a wider gape and are designed to hook the plastic through the nose. This helps the plastic to move naturally, providing the most lifelike presentation possible.

Dropshot sinkers have a crimped swivel at the top that lets you clip it onto the line. You just run your leader’s tag end through the eye of the weight and wedge it in place at whatever position you want.

The other distinct change that I made after switching to the smaller kayak was adapting my cast and retrieve when using hardbody lures. With the smaller, wider yak, I was able to stand and drift without spinning, and could therefore park the kayak almost touching the bank while fishing parallel to a likely bank. In the past, I employed a slow roll when using small divers for bass, but with this new-found ability to fish so close to a likely bank and cover the bank in its entirety with one cast (while observing from a standing position), I changed my retrieve. I now hop the diver across a likely bank by quickly winding and lowering the rod tip at the same time after a long cast. Once the lure touches the bottom, I allow for a lengthy pause so the lure floats up again before repeating the process.

It is great fun watching bass charge out from an undercut bank and have a look at the lure, and I can adjust the retrieve accordingly if they don’t strike during the first retrieve.

There is no point in being able to fish the tight stuff in a small yak if you can’t see into a snag with glare on the water. The change up from the larger yak to a stealthy smaller yak wouldn’t have worked as well for me if I hadn’t had a decent set of polaroids. This is low-tech fishing, and by that I mean that I don’t use a sounder when targeting the heavy cover, or any other high-tech gear.

When fishing smaller bass dams, I like to use Spotters with the Nexus lenses, as they provide enhanced depth perception and greater visual definition. These are designed for all day fishing and they work well for me. However, any good set of polarized sunnies will do the job, provided you can see down into the snag.

This style of fishing is bash and crash. I can now charge my kayak into a snag at pace to pull out a big bass. For this reason, I no longer use the high-end rods and reels that I crack out when fishing larger dams.

I currently use a 2-4kg spin rod matched to a 2000 size spin reel spooled with 6lb braid and 8lb leader. I like this outfit because there is a ton of power in the butt section so I can get stuck in when hooked onto a feisty bass, and there is also finesse in the tip to make dropshotting and working small divers a breeze. Sometimes I’ll run a second outfit, consisting of a slightly shorter 2-4kg spin rod matched to a 1500 sized reel if I’m fishing dropshot and divers.

I have really enjoyed the challenge of shifting from a large kayak to a smaller model, and utilising dropshot tactics on impoundment bass. Being able to work the entire water column with one lure so thoroughly has changed the game for me, and it’s now rare that I don’t have at least one dropshot rig ready to go on every trip!

Lake Jindabyne – the jewel in the Snowies

by Gary Brown • It had been a while since I had last paid a visit to Lake Jindabyne in the Snowy Mountains. When I recently visited for the Steve Williamson Invitational trout competition, I […]

by Colby Lesko • The cold weather has started dissipate, and the trout are starting to fire as they feed up after breeding. This makes for some exciting fishing. This season is shaping up to […]