Victoria might not have the likes of barramundi, mangrove jack, GTs and queenies but we do have an amazing array of willing lure taking species. Light tackle enthusiasts can go toe-to-toe with flathead, Australian bass, mulloway, black and yellowfin bream, trevally, estuary perch, Australian salmon and tailor, which make up the bulk of prized estuarine species.

Gippsland may be the Mecca when it comes to luring these species, but close to Melbourne’s CBD there are plenty of other river systems that can produce the same results. The Yarra, Maribyrnong, Werribee and Patterson rivers and Mordialloc and Balcombe creeks can be very rewarding. In most cases, these systems are relatively shallow with a lot of structure and it pays to have some experience in these systems to be successful.

Fishing with lures doesn’t need to be complex, but you do need to understand the different styles and actions that are available to choose the right one for the species you intend on targeting. Otherwise, you could be putting in a lot of hours and casts for zero result. Lure fishing enables anglers to cover an area, sort of like hunting for fish. Bait fishers tend to sit in one location and wait for the fish to come to them but for those fishing with lures, they can search for where the fish are holding.

Matching the hatch is a widely used term these days and while it stems from the fly flicking community, it is now used in all lure fishing scenarios. Regardless of the species being targeted, they all have their own diet they are used to eating. When it comes to lure selection, being able to fish a lure resembling something similar can pay dividends.

Crankbaits are an ideal estuary lure for bream, perch, flathead and trevally, mainly due to their design and size often replicating small fish, crabs and insects that these fish feed on. Bream can be particularly fussy and are often found feeding on the shallow flats or holding deep amongst the snags. Cranks are a proven lure in these situations and are available in shallow and deep diving, floating, sinking and suspending models.

Due to their range of actions, there is always a crankbait to suit how the fish are feeding on the day. If the fish are on the flats in the early morning, you could be fishing in less than a metre of water. Shallow suspending or floating model cranks can be worked near the bottom wherever fish are sighted. When fish are holding amongst the snags, deep diving suspending and floating cranks may be a better option, especially if the waterway is tidal influenced.

On a high tide, bream and perch will often sit higher in the water column, whether they’re under submerged timber or amongst a reed bed. However, on the low or falling tide they will sit deeper. Deep diving crankbaits are ideal in this situation because after a cast is made, you can rip the lure down to its desired diving depth before making a pause. If this doesn’t get an inquiry, repeat the process after a few seconds. Usually after the first or second rip a fish will take the lure.

Due to how crankbaits are used (crank, pause, crank), other species such as flathead and trevally will also take them if they are in the area. Crankbaits don’t tend to be large in size and while there are larger models for Murray cod and Australia bass, those designed for bream and perch tend to be in the 30-50mm range.

Minnow style lures can fall under the jerkbait category; however, rather than being jerked as such they tend to be cast, wound and paused. Although this technique is similar to that for crankbaits, a minnow lure isn’t ‘ripped’ hard to get it to dive deep.

Minnows tend to represent small baitfish that may be in an estuary. While they are also available in floating, sinking and suspending in deep and shallow models, their profile allows for long casts and steady retrievals.

Bream and perch can be quite fond of minnow style lures but they’re used best on flathead due to their profile. They can be cast along the edges of drop-offs as well as being cast into snaggy territory. They are also an extremely effective lure to troll. Depending on the waterway you’re fishing, you can use them to target salmon and tailor as well.

Minnow lures are a little larger than crankbaits and more slender in design, tending to range from 50-70mm. There are larger models out there but when it comes to flicking an estuary, lures in this size range are more commonly used.

Talk to any seasoned angler and they’ll agree there is no better form of fishing than surface luring. While any fish on a lure is a lot of fun, seeing them smash a lure on the water’s surface is totally awesome. It’s one thing to feel the take but it’s ten times better watching them eat it.

Surface lures come in a range of actions from poppers, paddlers and stickbaits. Either way, all float so they can be manipulated on the surface to act like they are a dying insect or baitfish in some form.

Poppers are named so because they ‘pop’ or displace water when worked. After a cast is made and the popper lands on the surface, with a tight line the tip of the rod can be pulled in a short jerking motion quickly while winding the reel’s handle to take up the slack line. This will cause the popper to skip across the surface, splashing as it does. While this motion can excite a fish, it is on the pause that the fish will hit it.

On the other hand, paddler style surface lures tend not to be jerked, just wound and paused. Due to their design, their wings make all of the commotion, enticing the fish to follow it. Once again, it is often when it is paused that it will be taken.

Stickbaits tend to be worked in a different manner. These styles don’t disperse water like paddlers and poppers; instead they imitate dying prey. These ‘walk-the-dog’ style lures tend to give off a snakelike action on the surface but to get this to occur, the lure needs to be wound while slightly shaking the tip of the rod.

Soft plastics are arguably the most versatile lure to use in an estuary, mainly due to them being quite inexpensive. When fishing for bream and perch, a lot of the time you are flicking amongst snags so you will lose a lot of lures. Soft plastics, although they are sinking, are a great alternative to throwing expensive lures into thick timber. You can still go through a fair amount of plastics and jigheads in a session but it is still cheaper than losing $20 lures each cast.

When choosing soft plastics, wrigglers and grubs are a top choice for bream and perch while for flathead, wrigglers and shads ranging 70-100mm are most often used. Wrigglers have quite a long, thin tail that ‘wriggles’ when worked, creating a visual display. Shads have a slimmer profile with quite a large, roundish tail. When retrieved, the tail beats in a side-to-side motion due to the water pressure when retrieved.

While these plastic styles are extremely effective, they can be retrieved using two different retrieval actions. The action of the lure is what excites the fish to take it; however, if a fish is not biting due to some environmental factor, a slow, constant retrieve might stir up a lethargic fish. 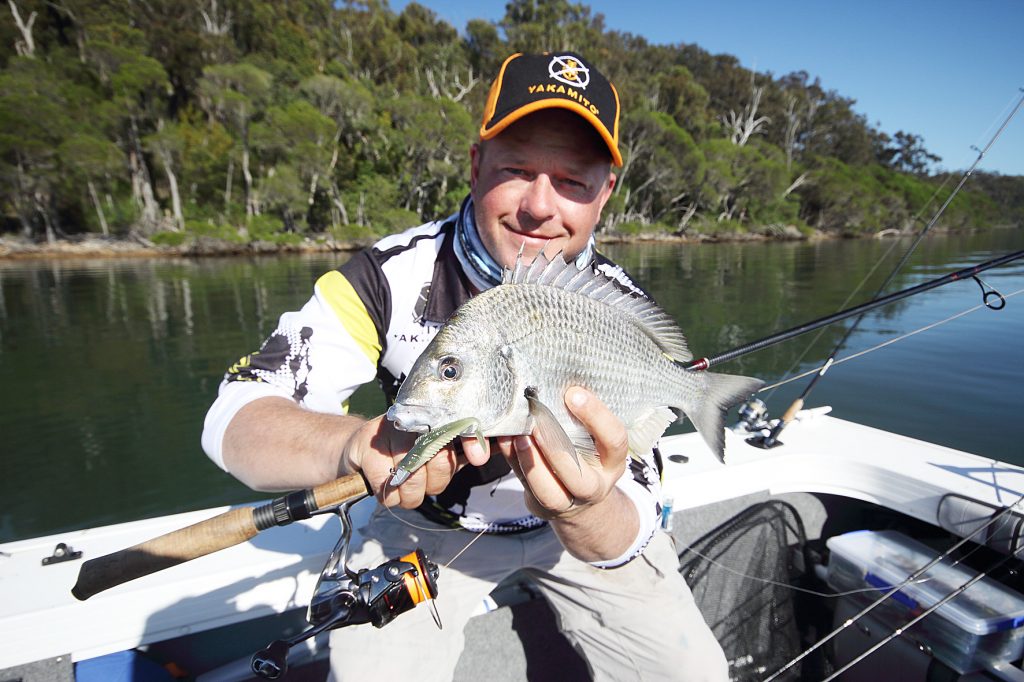 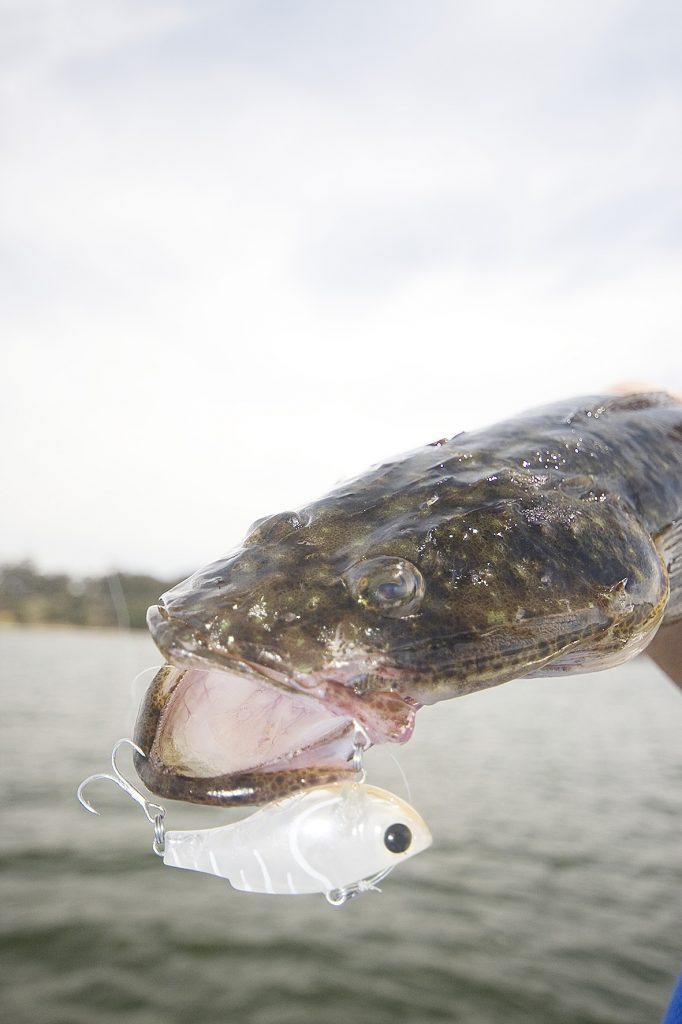 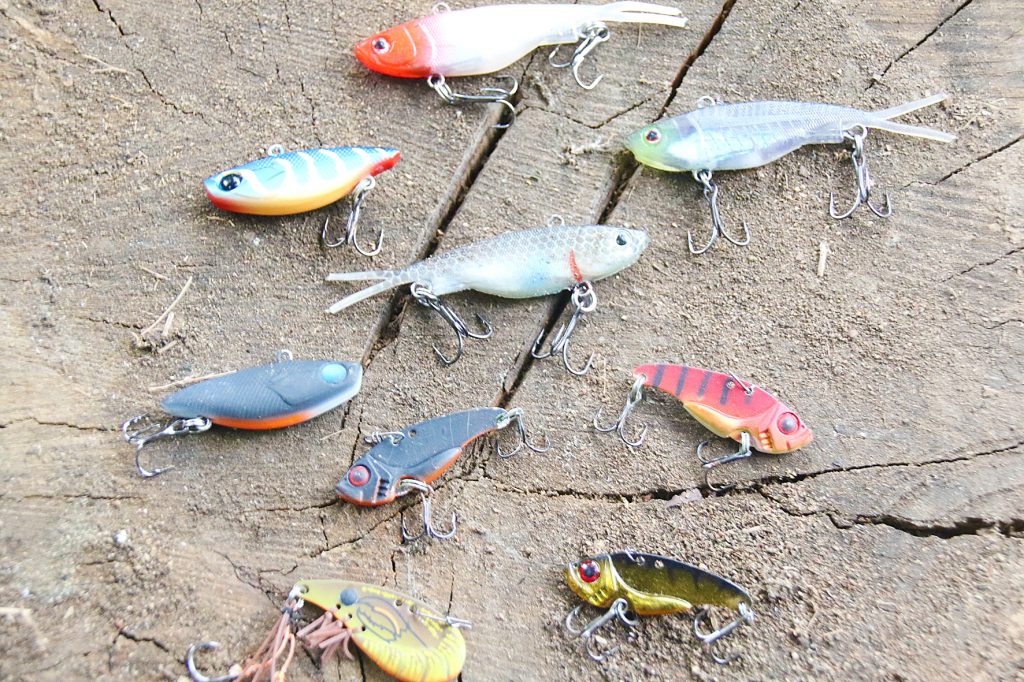 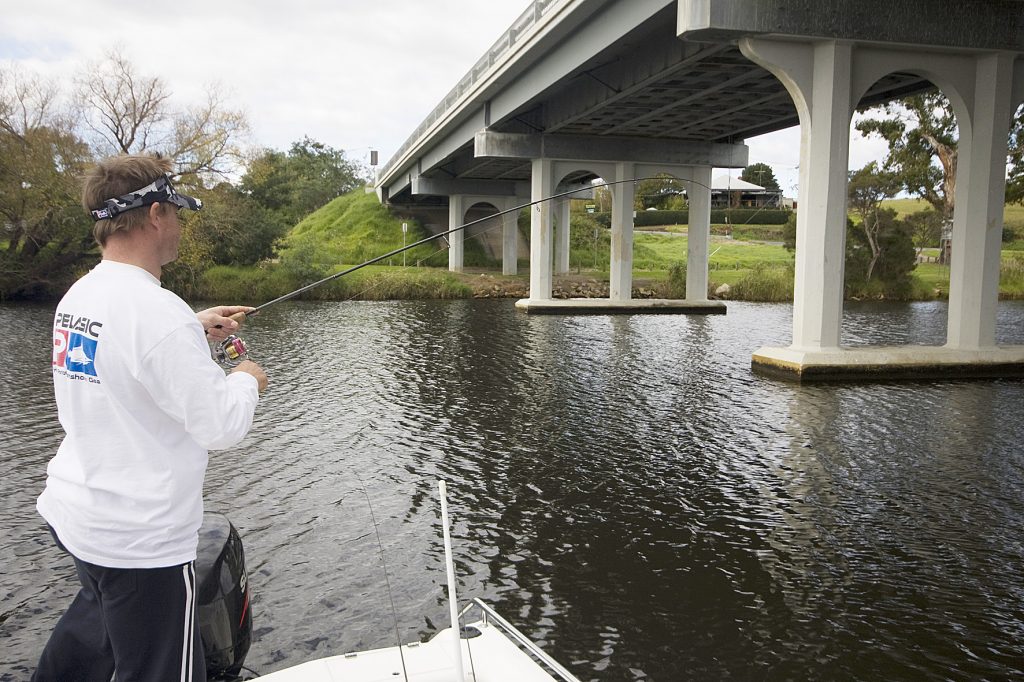 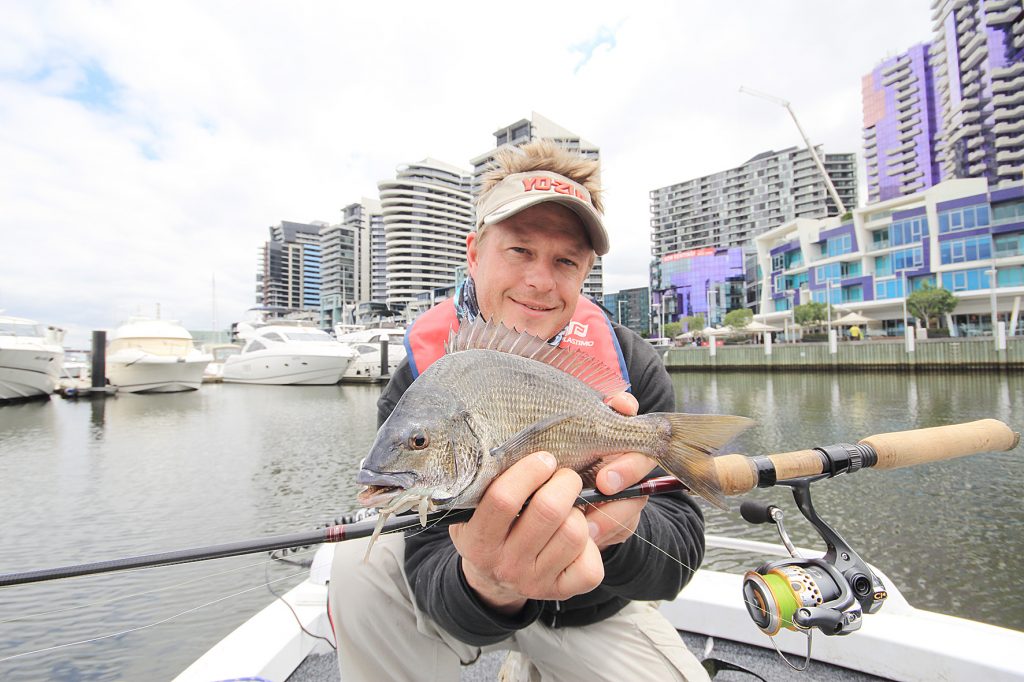 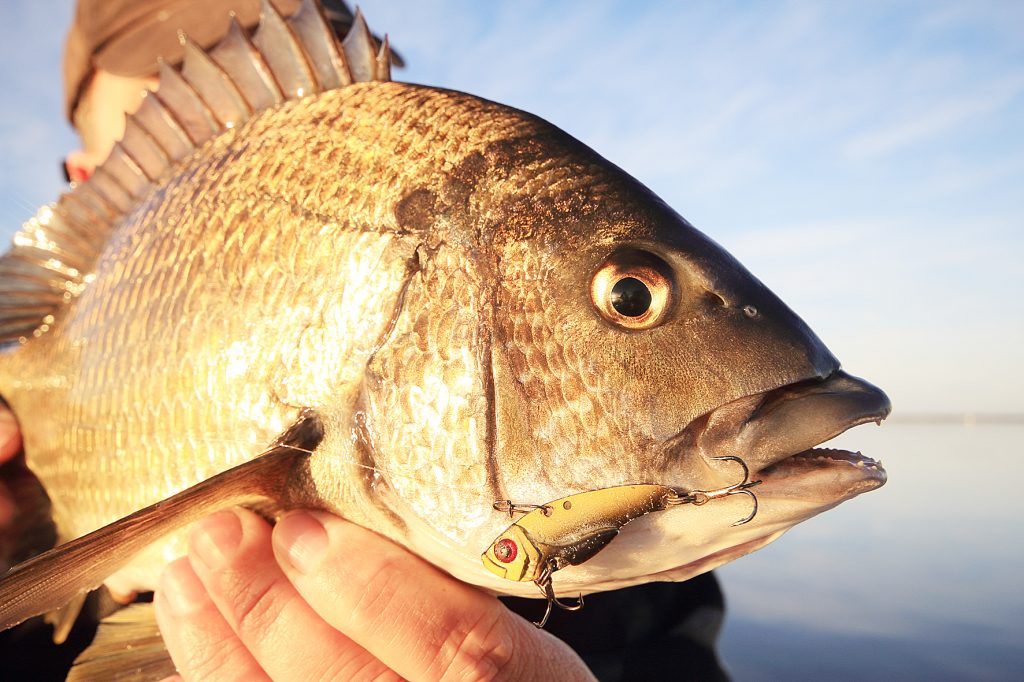 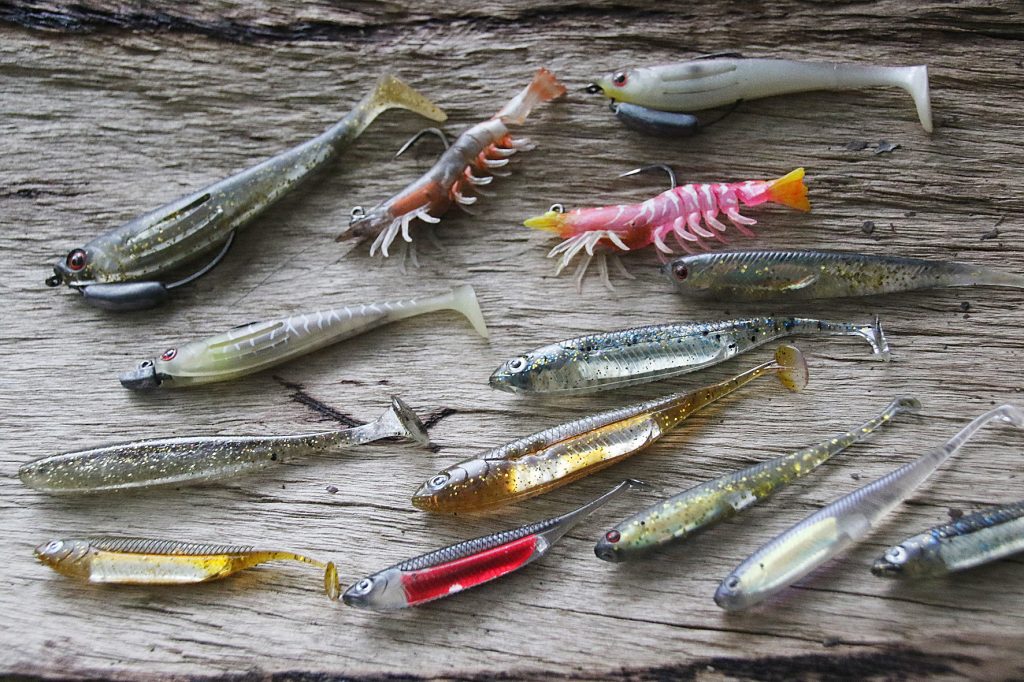 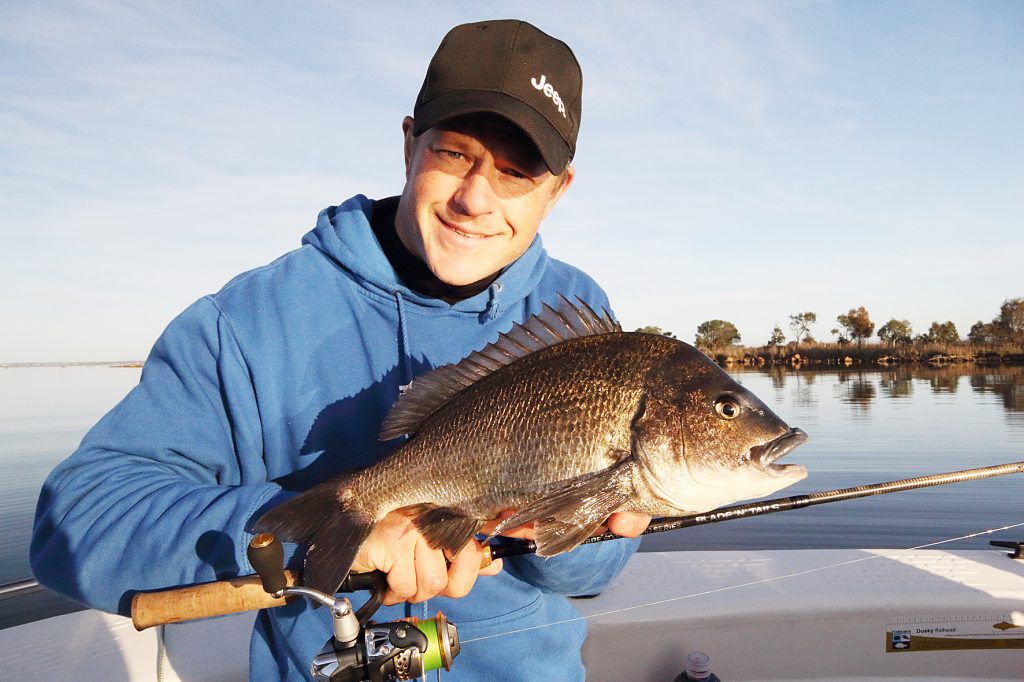 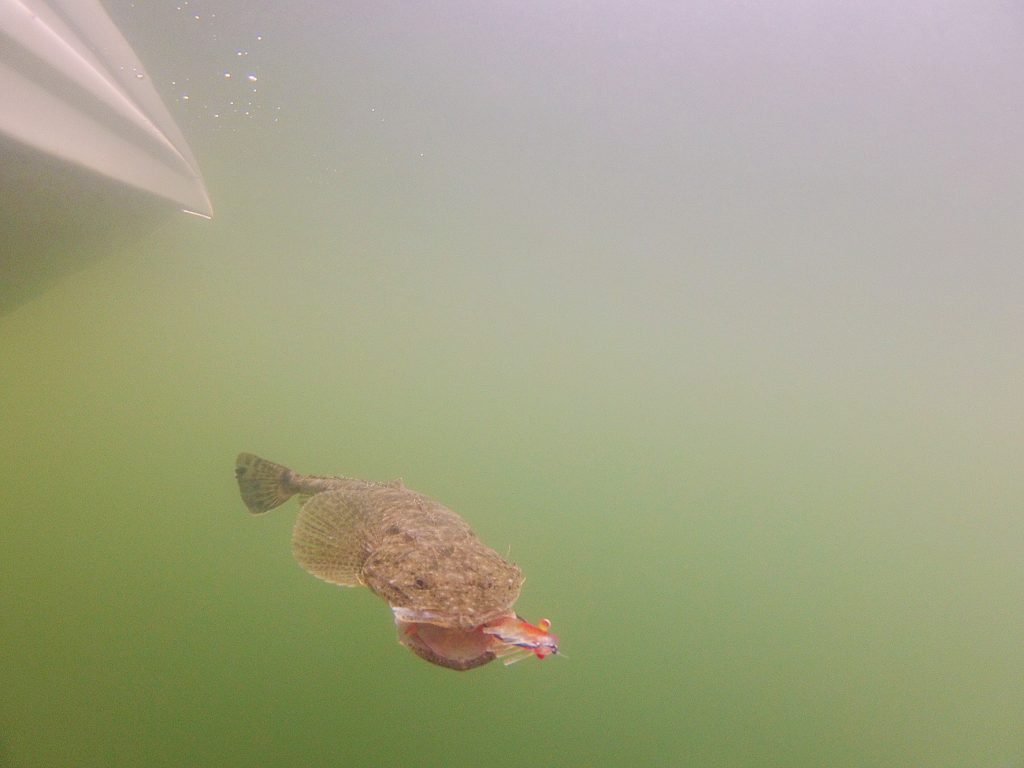 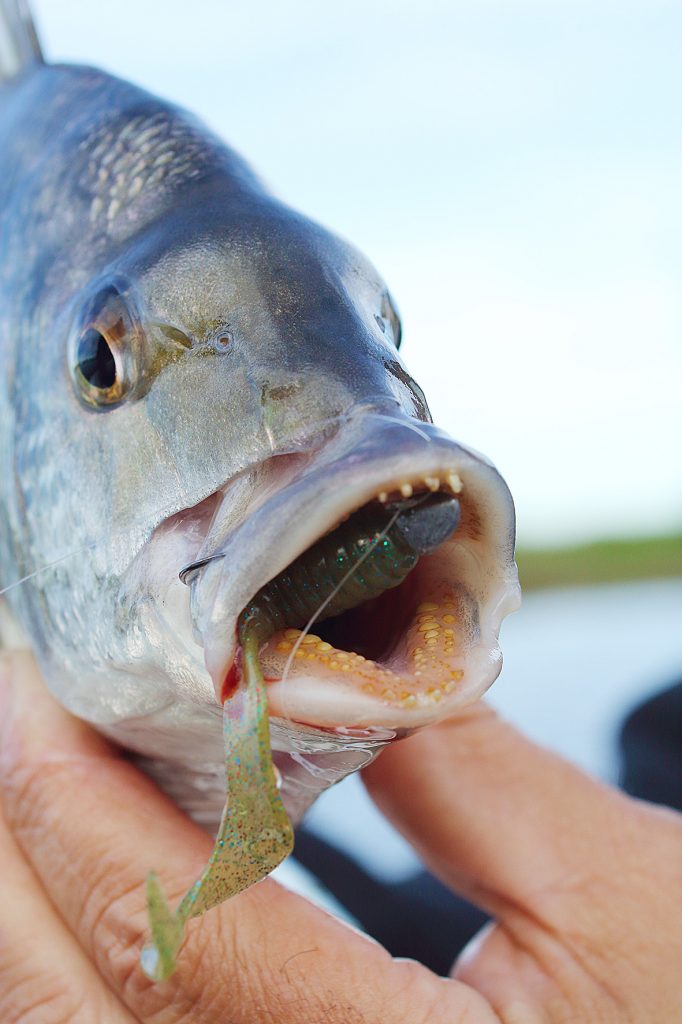 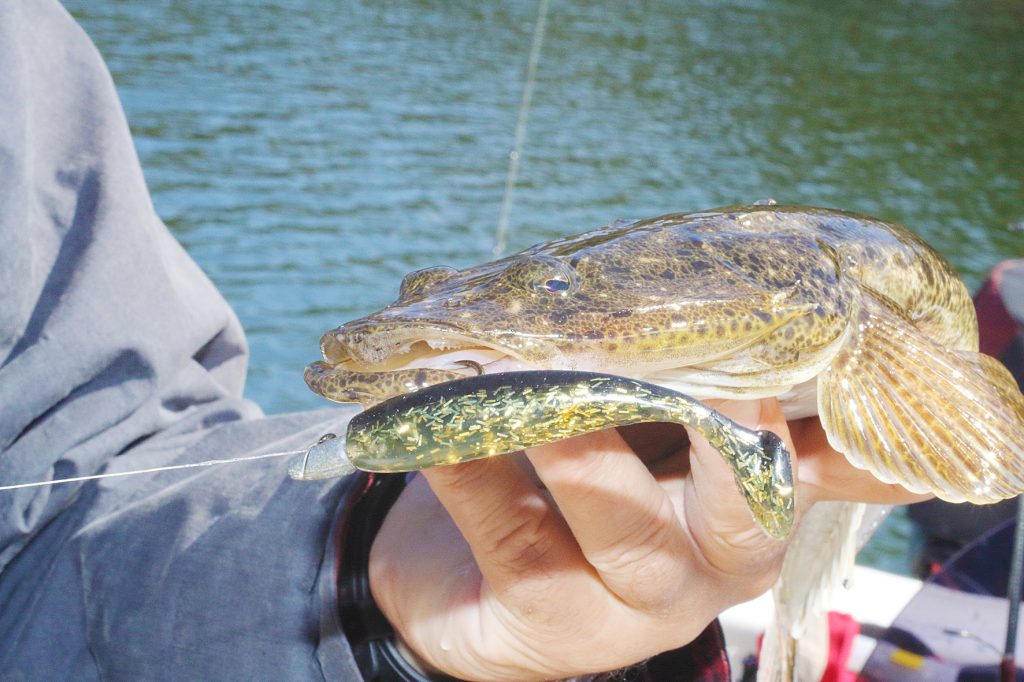 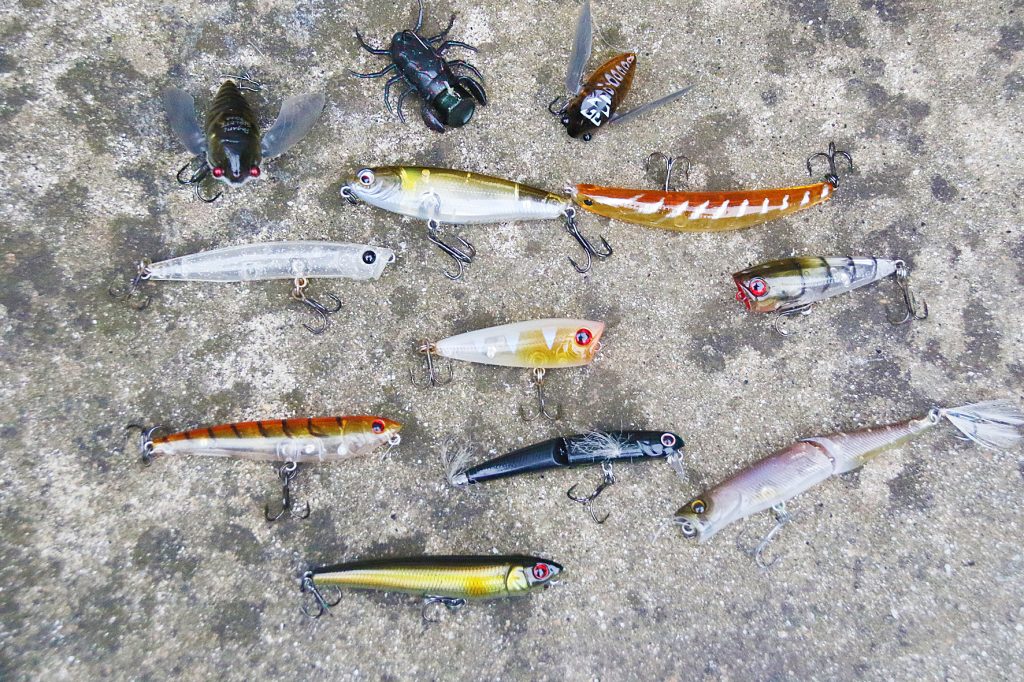 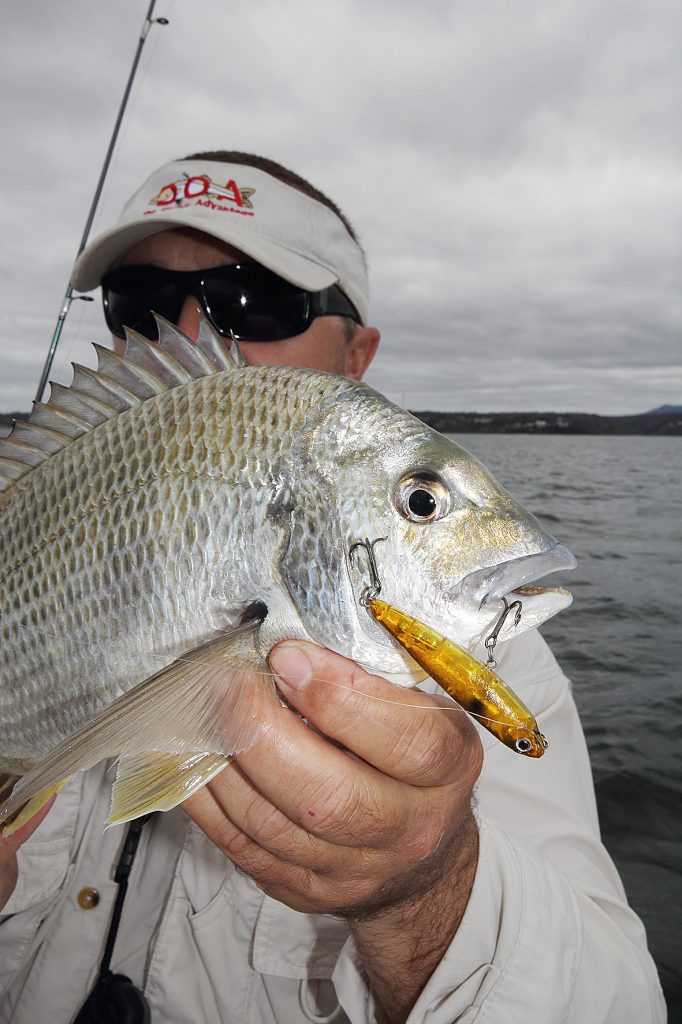 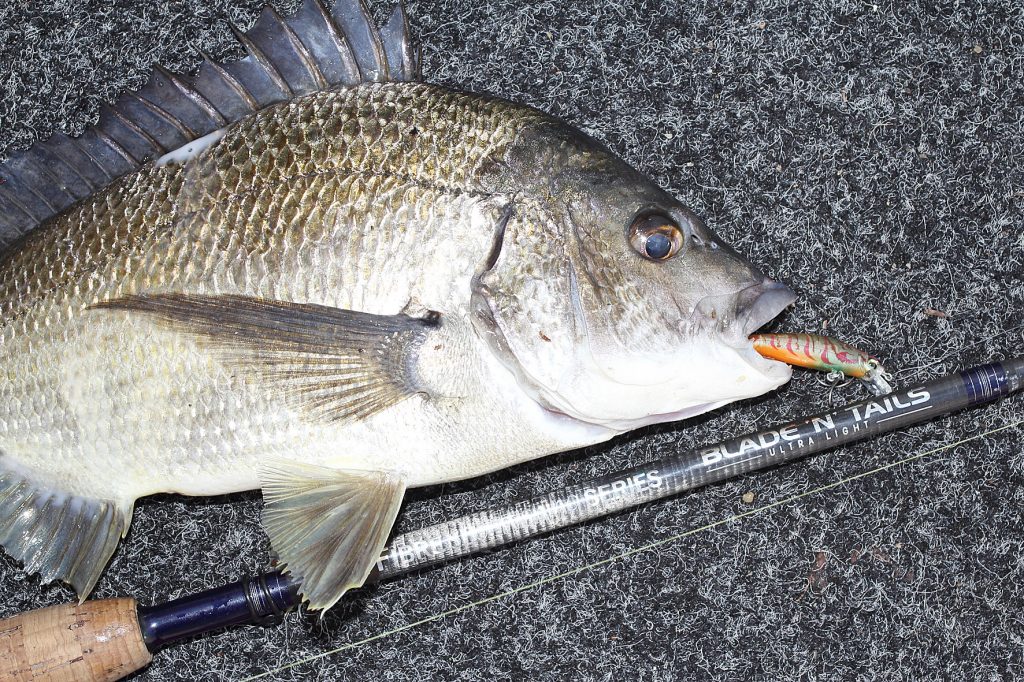 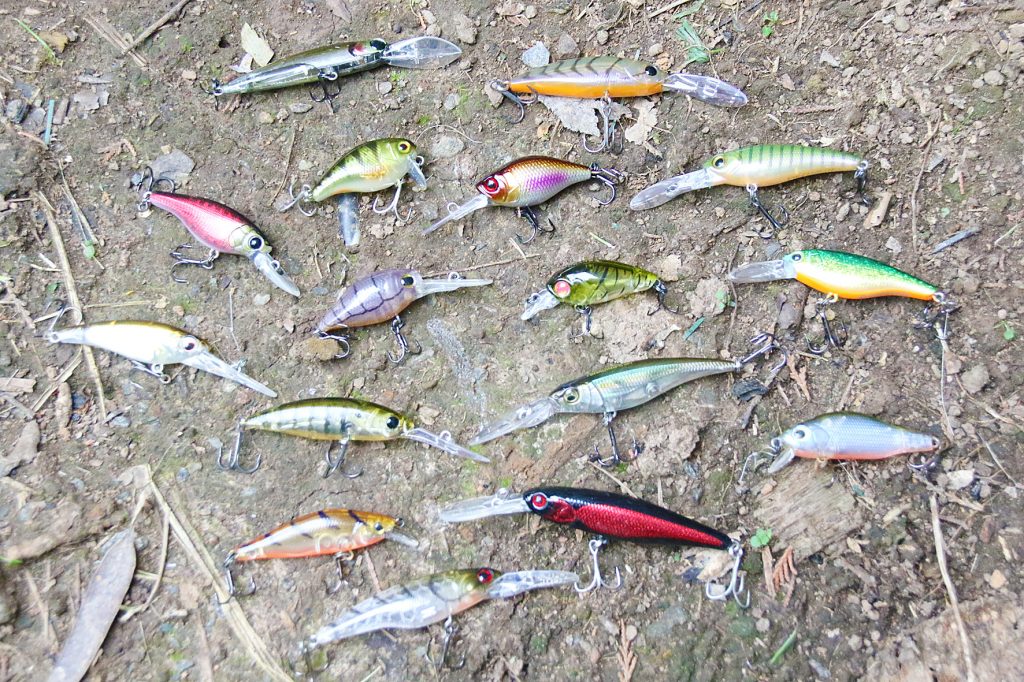 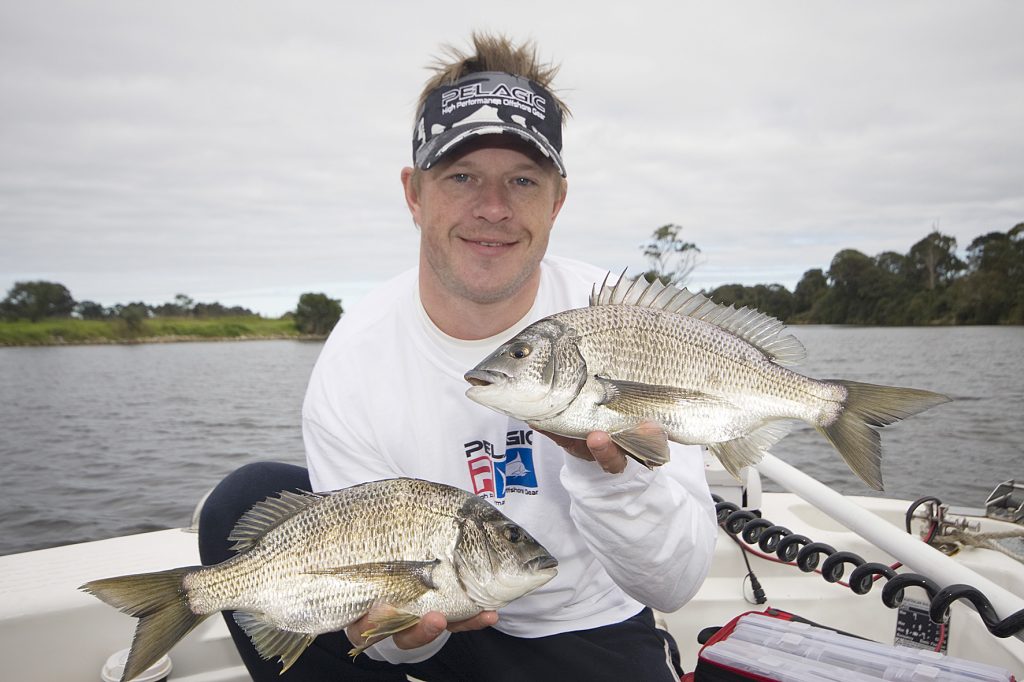 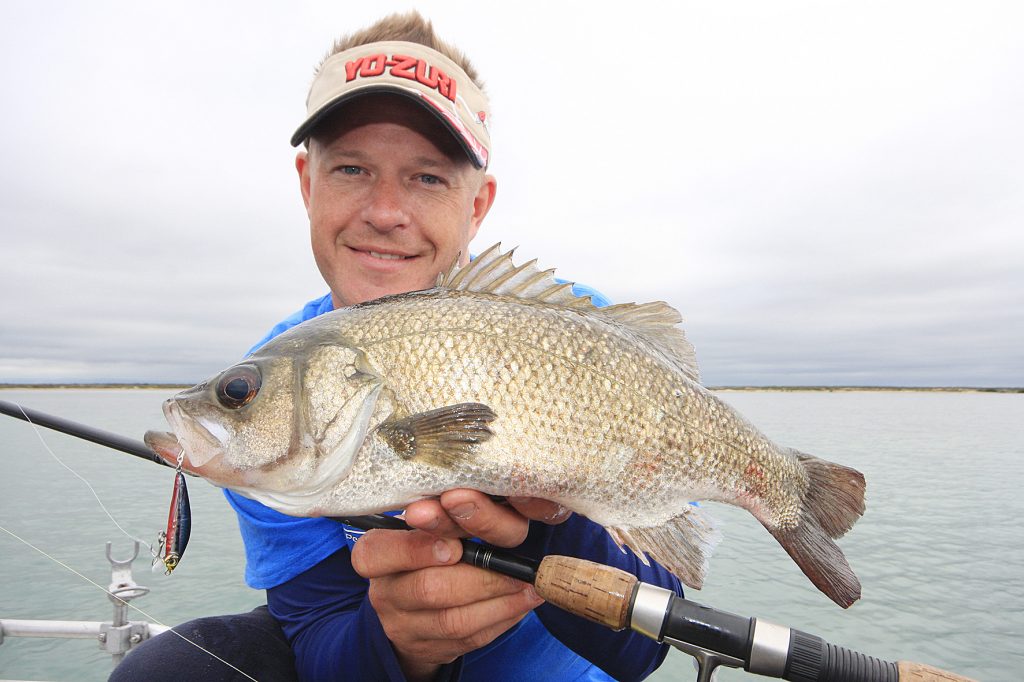 On the other hand, if they are actively feeding you can vigorously hop the plastic back towards you. The hop method is more used when targeting flathead, as you can rip the plastic up into the higher water columns before allowing it to swim back to the bottom.

Bream and perch will sit higher in the water column, usually amongst the snags. Plastics can be cast into the timber and slowly wound back out, allowing the plastic’s tail to do all the work with minimal manipulation.

If you are new to lure fishing, vibes are the simplest to use. Crankbaits, minnows and soft plastics all require a finesse approach in using them to get the desired action from the lure and if you’re heavy-handed like me, manipulating some lures can be frustrating. Vibes make things much easier.

Vibes can be made from metal, ABS plastic and in the form of a soft plastic. Despite the different materials, all are used with the same technique. They vibrate on the retrieve and this action under the water is what lures fish to them. They’re available in sizes ranging in size from 30-160mm; however when it comes to estuary fishing, 30-50mm are commonly used.

In many rivers throughout winter, bream are known to school up either in the middle of a river or along the edges and in open water. Vibes can be worked in all depths and the technique is as simple as casting them out, allowing them to sink to the bottom before lifting the rod vertically a metre in the air. This lifts the vibe off the bottom and you can immediately feel the vibration from the lure. After the rod is lifted, the rod tip is lowered back to the water surface while winding up the slack line. When the line is taut, the process can be repeated. However, when retrieving a vibe, it is always good to let it sit on the bottom for a good five seconds before lifting again.

Keep in mind that if you don’t feel the lure vibrate on the lift, nine times out of ten the treble hooks have fouled up during the cast, in which case you are better to bring the lure back and recast than to continue to work it. If a fish does strike with the hooks fouled, you might miss setting the hooks.

Lure fishing estuaries is a lot of fun and these days it is more common than bait fishing. Despite the variety of lures available, choosing the right one to use can be the difference between being successful and not. Fishing situations change and not just from day to day but by the hour. Having the ability to adapt is what will ultimately bring success.

Lure a luderick – tips and tricks

by Gary Brown • Some anglers I’ve known over the years argue against catching luderick. They say, ‘it’s boring to watch a float for hours on end,’ or, ‘they taste terrible,’ and worst of all […]

by Paul Lennon • Hook choice for mulloway can be a very contentious issue amongst anglers. While some swear by circles others strongly argue over a single or double snelled J hook and that’s before […]