The Gippsland Lakes are back! Of course they didn’t go anywhere but the area went into lockdown after the devastating bushfires. Then, around late February things went back to normal… until COVID-19.

This virus may have distracted us from the bushfire heartbreak but let’s not drop the ball. The easiest way we can help is to plan our next holiday at local destinations. When restrictions are lifted, get the fishing rods out, pack up the boat or strap on the kayaks and head to the Lakes. Even land-based anglers have plenty of options there for great fishing, beaches, hiking, bike riding, visiting wineries, great pubs and restaurants.

Let me remind you about some of the treasures of the enormous Gippsland Lakes area and explore its tourist activities, places to stay and of course how and where to fish.

For the main part, when you visit the Gippy Lakes you’ll see little change to the towns of Sale, Bairnsdale, Paynesville, Metung or Lakes Entrance. The biggest impact to the area immediately after the big fires was ironically rain. Heavy downpours hit the burnt out catchments and the runoff filled the rivers with very dirty water. The upper Tambo was worst affected and the stream was hit by thick mud, burnt wood and ash. It looked terrible and flowed way downstream then reached the river mouth where it empties into Lake King. The Latrobe, Avon, Nicholson and Mitchell rivers were also running very brown.

The coloured waters looked very confronting at first but, incredibly, a lot of land-based bait anglers were catching a tonnes of big bream in the brown flows. A lot of switched-on anglers know that freshwater like this can really get bream on the chew, so don’t be put off by any of the discoloured rivers. 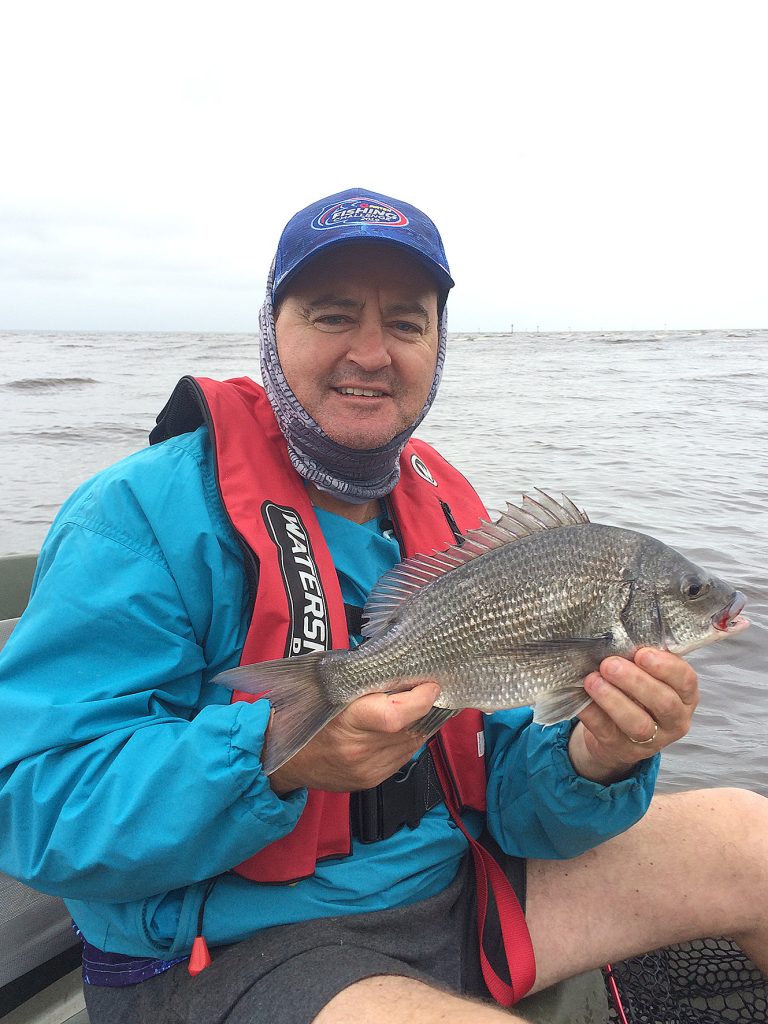 Rod Tatterson knows that Lake Victoria holds big numbers of bream around 30-45cm, and blade lures will score you plenty. 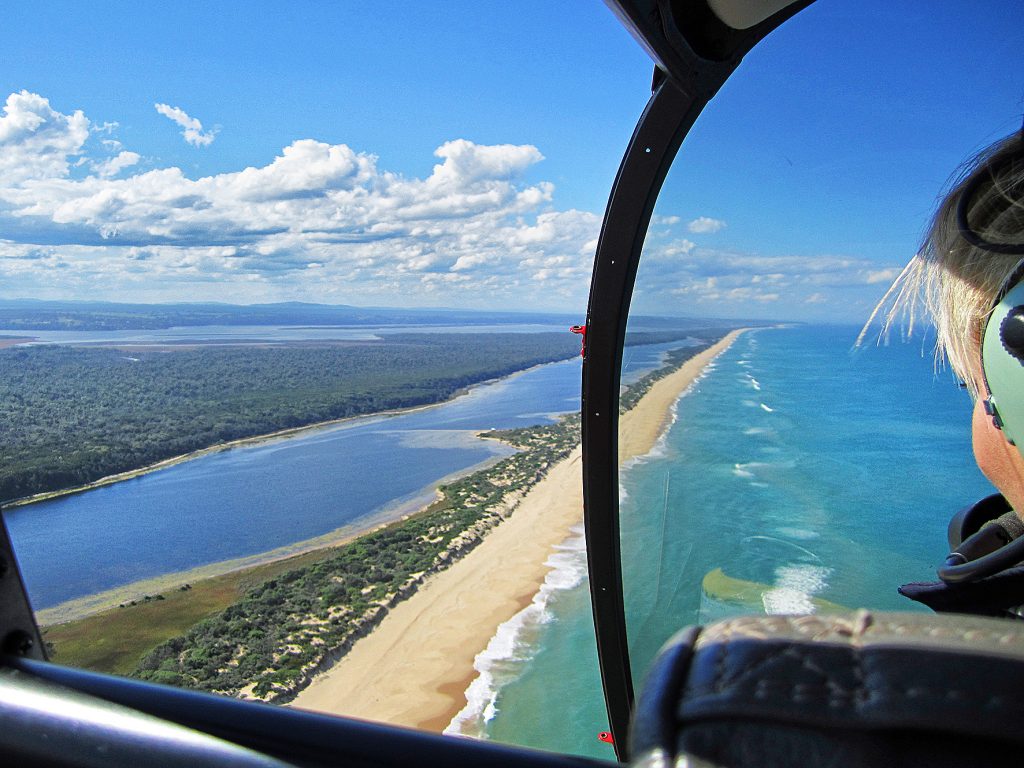 The 90 Mile Beach and Gippy Lakes look incredible from the helicopter on a beautiful sunny day. Photo courtesy of Tania Sederlan. 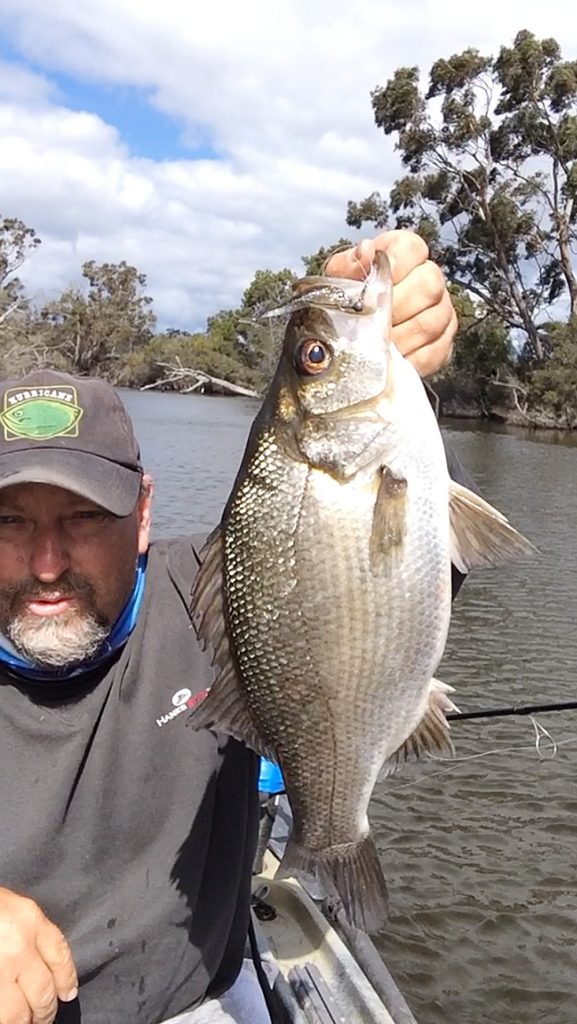 River snags always produce bigger than average perch and soft plastics are a deadly lure to trick them. 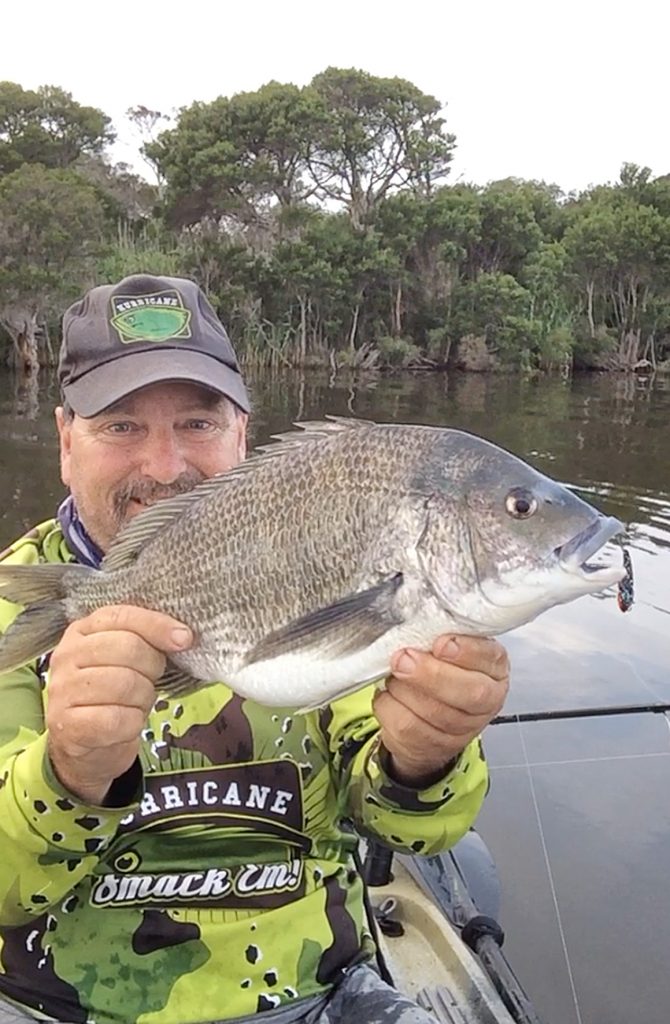 Lake Wellington is hardly ever fished but is home to some very big bream, like this 47cm caught recently on a Hurricane Vibz blade.

The serene and peaceful canals at Paynesville have the best accommodation, like the double story apartments of Captains Cove Resort. Photo courtesy of Tania Sederlan. 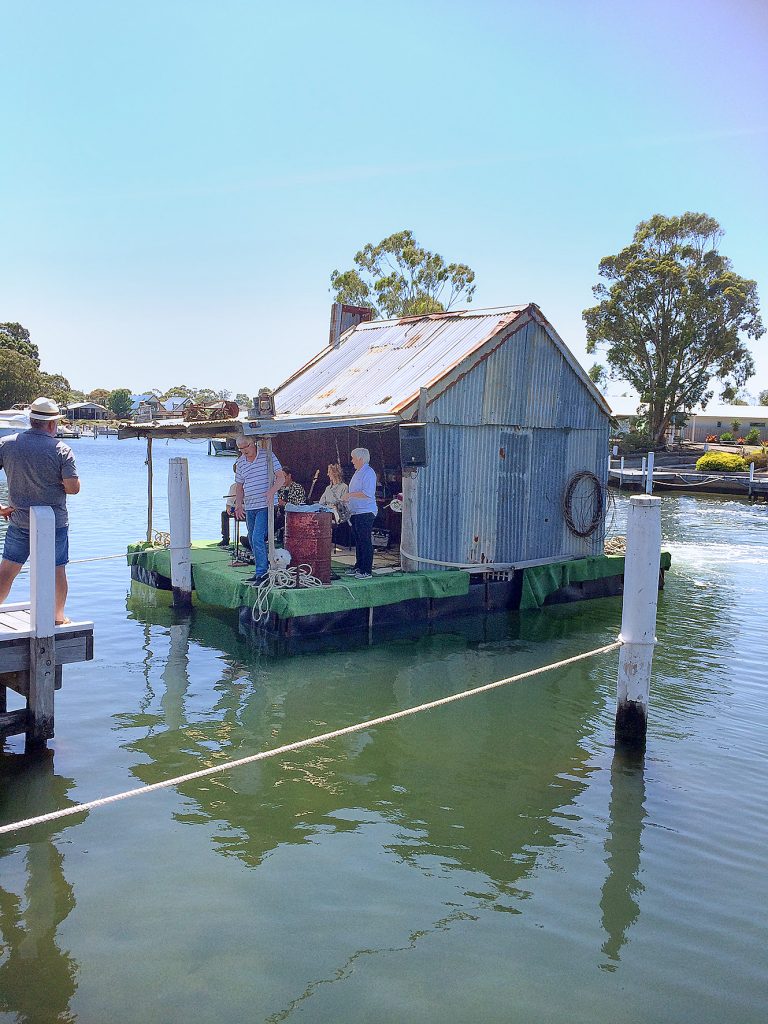 This is the famous ‘Floating Shed of Paynesville’. It motors around with music or even a band playing from within. 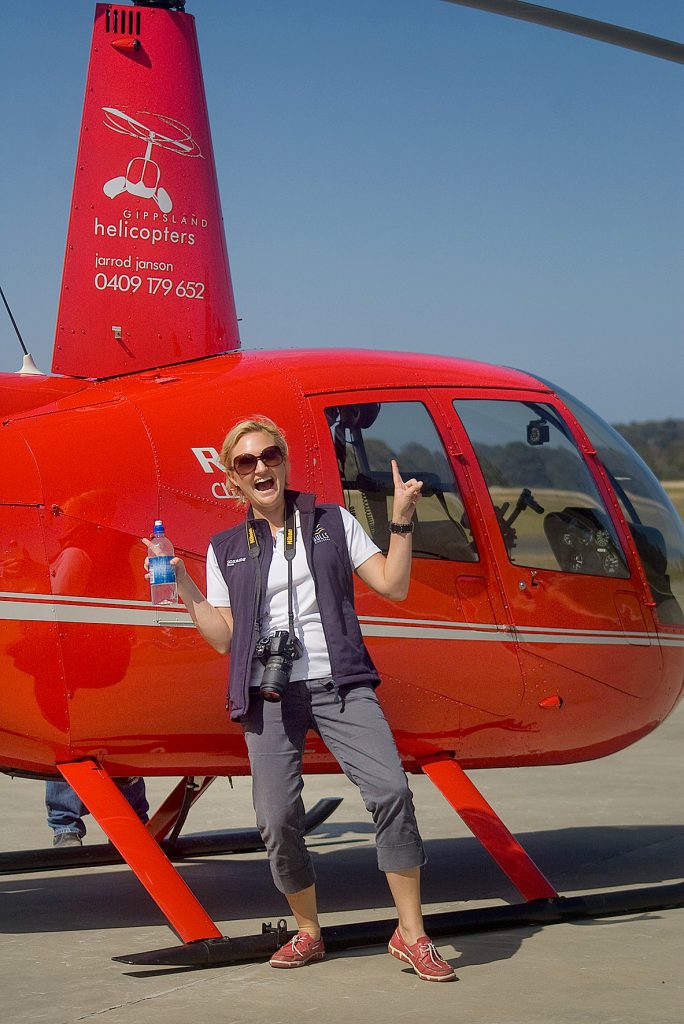 Fancy a breathtaking helicopter ride to get an eagle eyes view of the vast Gippy Lakes and out into Bass Strait? [Photo courtesy of Tania Sederlan.] 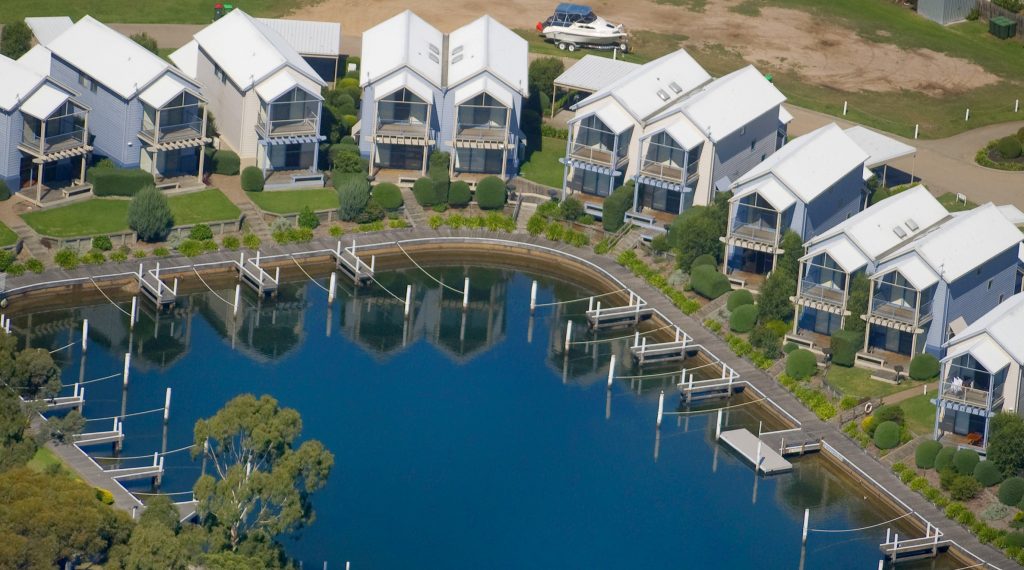 Captains Cove Resort has stunning views and a private jetty for mooring your fishing boat. [Photo courtesy of Tania Sederlan.] 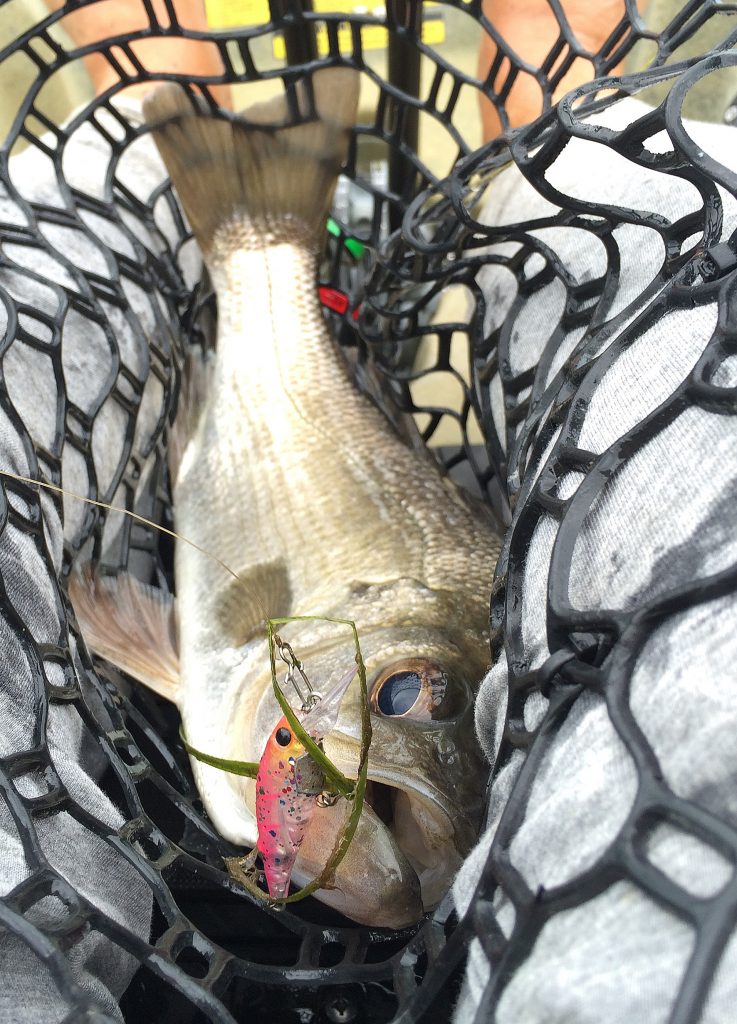 A bibbed Twitch 40 minnow lure weighted with lead was the undoing of this Mitchell River estuary perch. 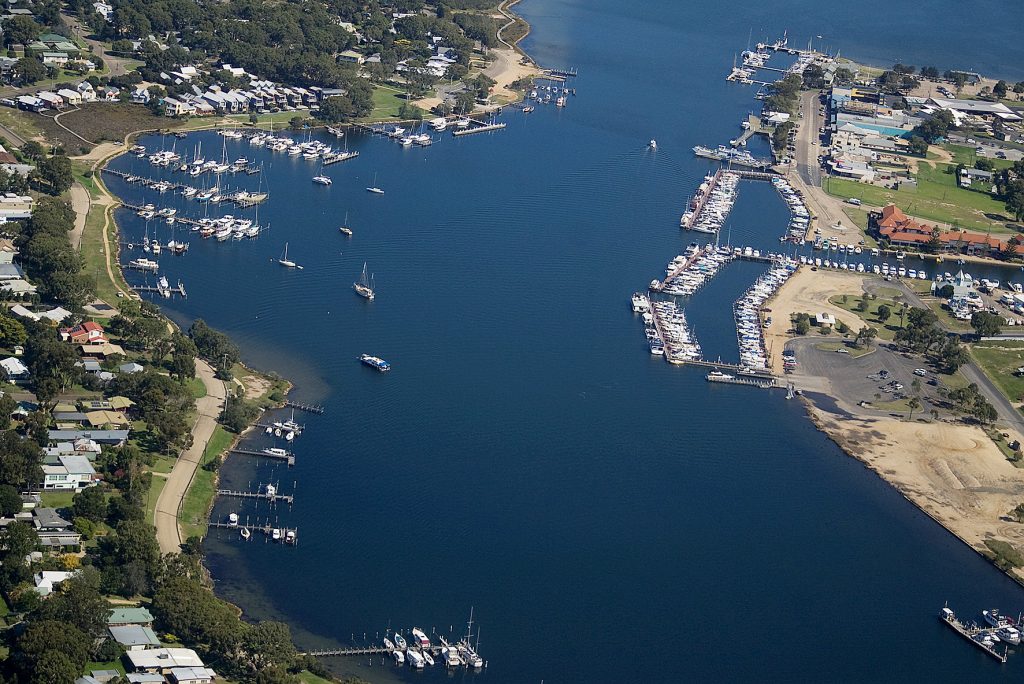 The Raymond Island Ferry crosses from Paynesville and takes passengers, cars with boat trailers or even four wheel drives and trucks. [Photo courtesy of Tania Sederlan.] 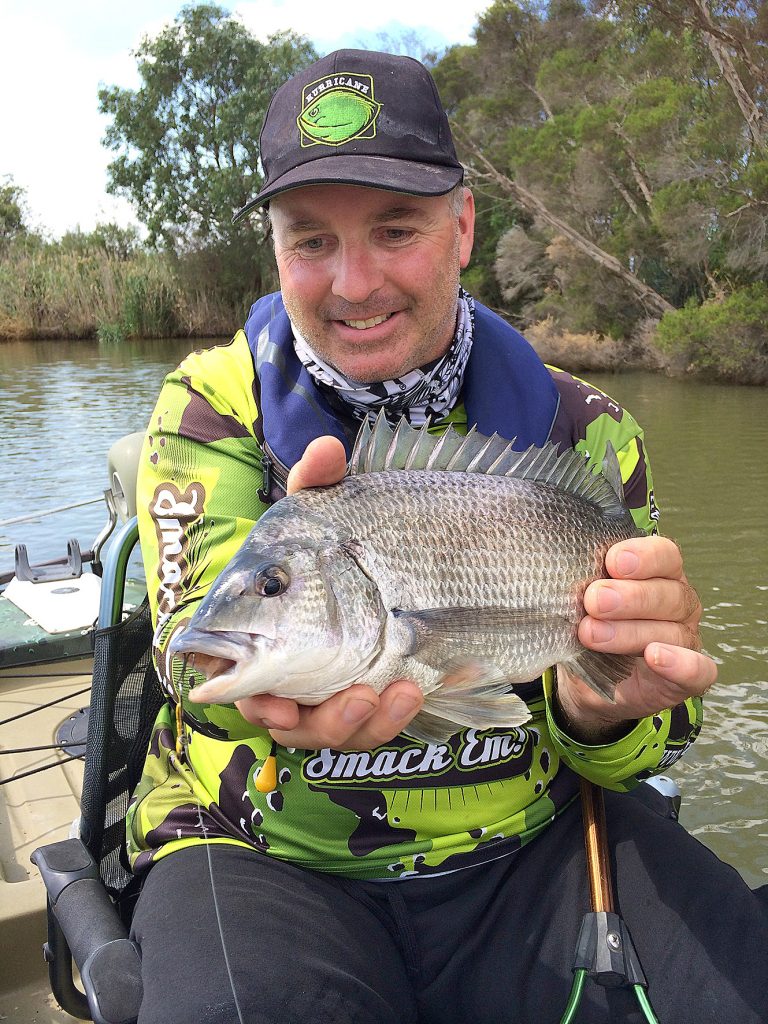 Tony Pettie with a 40cm bream caught on a Hurricane Vibz blade. 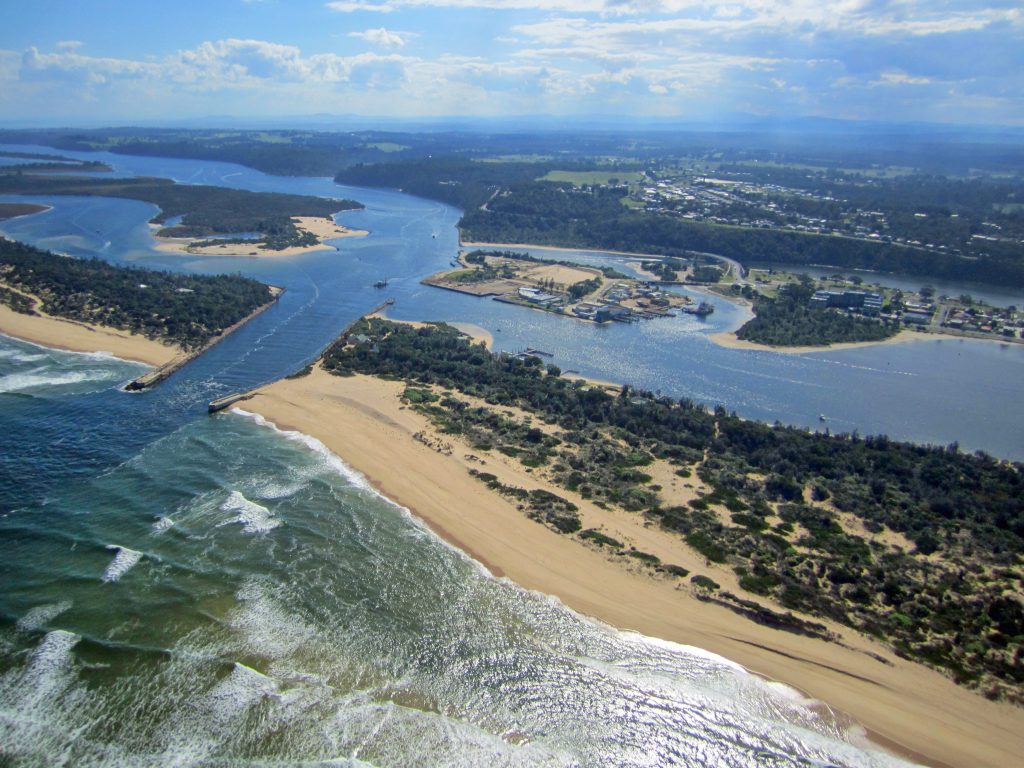 Where the rivers meet the sea at the township of Lakes Entrance. [Photo courtesy of Tania Sederlan.] 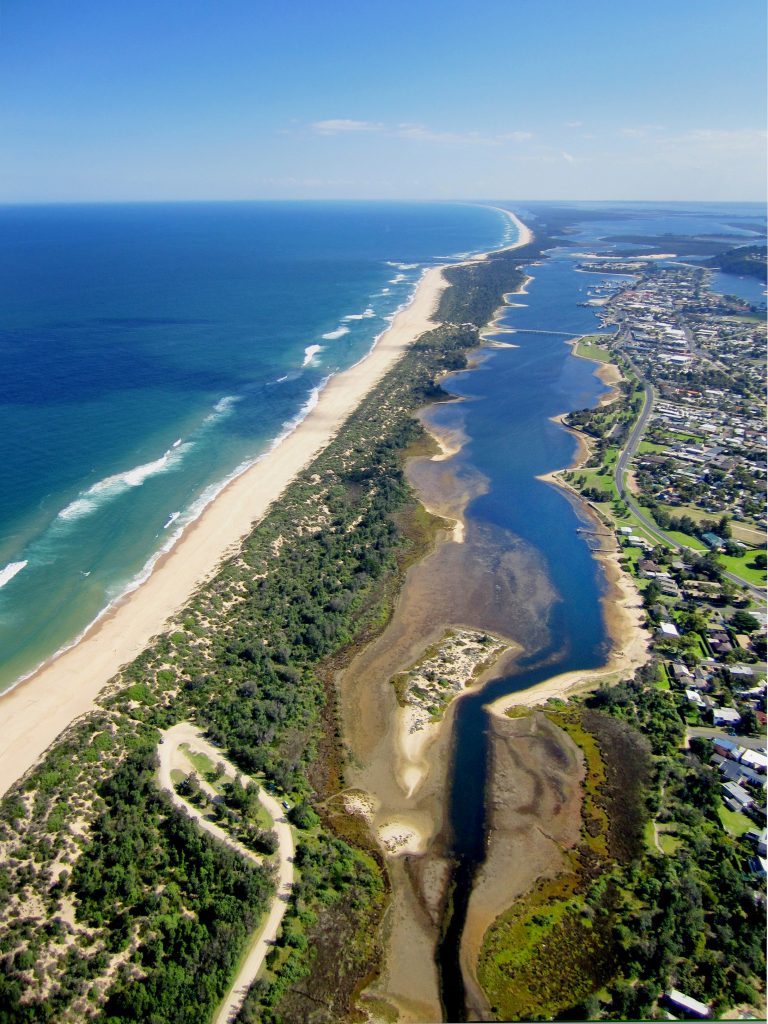 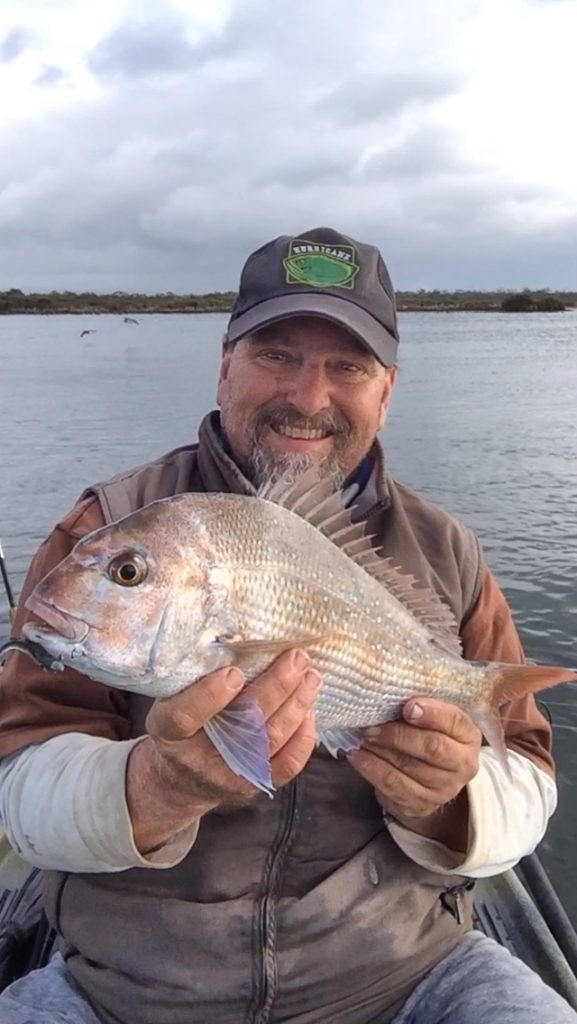 Pinkie snapper are common in the lakes from Metung to Kalimna and readily take lures, like this Hurricane Sprat soft plastic. 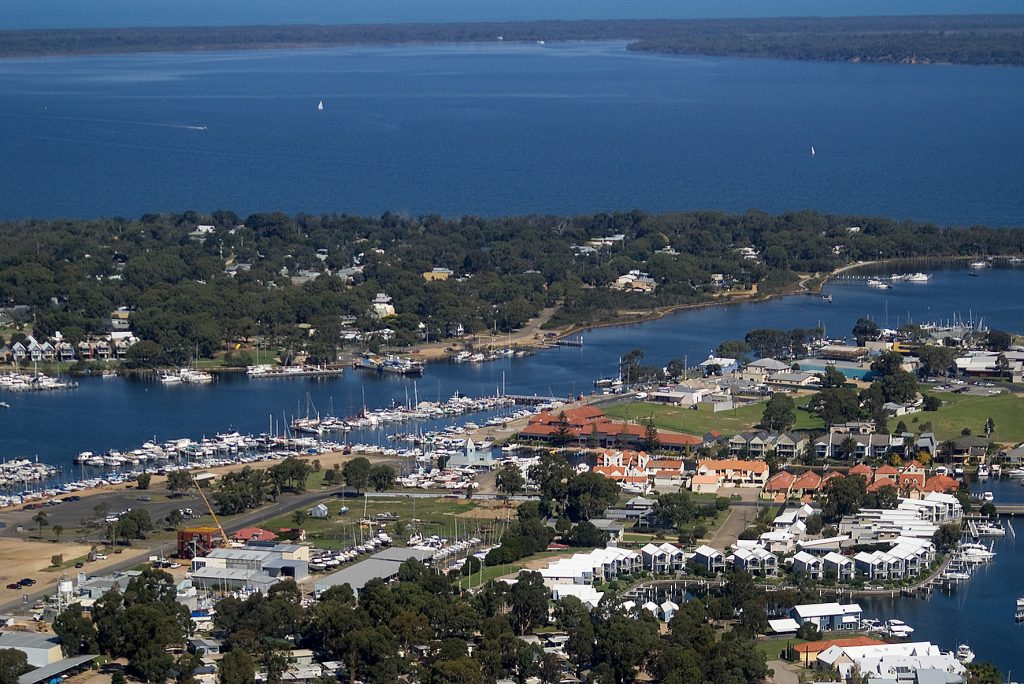 The magic of Paynesville viewed from above with its stunning lake views, moored boats and resort accommodation. [Photo courtesy of Tania Sederlan.]

Being right on my doorstep, I’m very passionate about the Gippsland Lakes. When you study a map of this estuary it looks huge on paper but when you spend time exploring in a boat it then becomes absolutely massive. Having lived here for 25 years now I’m still discovering brand new fishing haunts and, over the last few years, even catching new species of fish.

The never ending stretches of open lakes and the five impressive rivers are all worth fishing during most of the year. The Gippy Lakes at around 600km2 is the largest complex of inland waterways in Australia, so even during the busiest holidays you can find somewhere to escape the crowds. For most of its life, the system was closed off to the ocean and the water level of the lakes would gradually rise until the waters broke through to Bass Strait and then drop down to sea level. In time this ‘break-through’ would eventually close up and the lakes would fill again. It would often be years before another new channel to the sea broke through and sometimes this could be quite a while a long time from the last one forming.

However, in 1889 they decided to build a wall to permanently position a perennial channel, which is now much bigger and always open due to constant deep dredging. This has changed the Gippy Lakes from mostly freshwater to now a saltwater environment. This also means that the fire impacted rivers and dirty water mixes with large volumes of the cleaner saltwater and mostly absorbs any negative impacts to the aquatic life.

The number one target for the lakes and rivers is black bream, and they can be caught all year round. You can find them just about anywhere, but I would start my search with a visit to the Mitchell River.

First stop would be a trip to get some bait. Local suppliers, Bairnsdale Bait Supply, have an array of sandworm, spider crab and prawn baits, along with up to the minute fishing reports that could put you in a hot spot and have you fishing within half an hour. Lure anglers will benefit from paying attention to where bait anglers are concentrated, as they are probably parked there for a very good reason.

If the rivers are still running dirty and don’t appeal to you, there are plenty of lake fishing options, like Hollands Landing, Paynesville, Metung and Lakes Entrance, just to name just a few.

If you’re serious about catching bream on lures, make sure you have plenty of small blades as they are deadly when searching for bream of all sizes. They are the best all round lure in my opinion because they catch bream in very deep water and are most effective in the shallows as well. The best method is to use these blades dead slow and with long pauses – even the best of anglers fish them too fast at times.

My biggest ever PB bream at 50cm was caught in Lake Wellington on a Hurricane Sting blade in black. Hurricane Lures owner, Peter Nord, is located at Bairnsdale. He is a gun lure angler and has developed a huge range of his own branded fishing gear including countless soft plastics, hard bodies and blade lures that catch the hell out the local bream. The staff will also put you onto where the biggest bream are biting best.

There are so many different species of fish to target at Gippy Lakes.

Whiting and big flathead are a prime target from October through to the end of May. The best area to find them is in Lake King between Metung and Lakes Entrance.

Estuary perch are now high on the list for mainly lure anglers. The Mitchell River has a big population of them, especially around the Highway Bridge in Bairnsdale. Way upstream from the town where the bass are, EP are also commonly found, thanks to years of heavy stocking.

The biggest win for the Gippy Lakes over the last five years has been the big numbers of kingfish that have moved in. They now push right up into the Paynesville area and, in March, dozens of kingies were landed right in town at Lakes Entrance between 50-70cm. A couple of mates have landed up to 12 kingies a session by casting or trolling large soft plastic lures. If you target these epic sport fish check with the local tackle shop as to where the kingfish are lurking because they are highly mobile.

Snapper are very common around Nungurner or Metung and luderick are caught from jetties with weed or sandworm baits.

Another new development over the last five years are the big yellowfin bream from 40-50cm that are now caught year round inside the lakes between Lakes Entrance and Duck Arm.

There’s also a huge run of prawns in the lakes even into April and May and flounder for those who enjoy night fishing.

Accommodation in the area is near unlimited and too much for me to list.

Lakes Entrance is the largest of all the towns that are situated right next to the water, with apartments, hotels and camp parks. It has easy access to both the lakes and the picturesque Ninety Mile Beach.

Metung is a small quaint village surrounded almost completely by lake water. It’s a popular tourist destination for those enjoying trendy dining options, artisan galleries, great outdoor markets and one of the best pubs in Gippsland.

However, my very favourite location is Paynesville with most of its accommodation overlooking the dazzling lakes or a system of charming canals. There are a couple of bakeries, classy pub or café dining and excellent take away options. At Captains Cove they have double story resort style apartments that have tranquil water views, where you can moor a boat at your back door. It really is peaceful living and you can feed the local ducks and swans while enjoying a quiet drink at your own private jetty right at the water’s edge. One of the best attractions at Paynesville, apart from the first-rate fishing options, is a ferry trip to Raymond Island that’s famous for koalas and has a network of excellent tracks for bike riding or bush walking.

So if you happen to need a break from the fishing there are plenty of activities to keep you busy right across the region. Book a cruise through the vast lakes to spot the local dolphins or try a fishing charter to catch a few local bream or offshore snapper. What about a stunning helicopter ride to view the lakes from above, maybe hire paddleboards and kayaks or visit a local winery or beer brewery?

There are also quality golf courses at Lakes Entrance or Bairnsdale. Speaking of little white balls, Lakes Entrance is the home of mini golf and, if you can’t fish on a windy day, this will entertain kids and adults for hours. Oh, and just before I go, don’t forget the Golden Tag promotion with about 900 fish still tagged and each worth $2,000 each. The competition had to be suspended during the lockdown but it will open again at a later date, and you can see its current status at the VFA website at https://vfa.vic.gov.au.

So while you’re still  start planning your next holiday to Gippy Lakes to see the absolute beauty of this region. The locals are ready and waiting for your arrival, so I’ll see you on the water.