Thermoplastic (TPE) lures are one of the most used plastics these days because their properties give them increased durability and a freedom of movement that most anglers desire.

My work at Wilson Fishing sees us deal with a lot of comments from end users who don’t understand what is required to keep these lures and other lures safe from turning into a gluggy, useless mess. I don’t have to ask other TPE lure suppliers to know that they have exactly the same problems as we do.

Let me be clear from the start: your lures interacting with other plastics is not a manufacturing fault. It is the end user not understanding the specific needs of TPE lures in regards to storage that is the problem. So, to solve that, I’ve been asked to write an article on the best way to store TPE plastics.

When they first hit the market, products such as soft Jackalls, ZMan and Terminator were must-have lures. The lures made from thermoplastic were as tough as nails, and stretched and wriggled like nothing else on the market. For every three flathead we would catch on a standard soft plastic before it was destroyed, a TPE lure would catch dozens! From an economic point of view, they simply made sense.

That was until we stored them for any length of time (sometimes as little as overnight).

My first heartbreak was over 10 years ago when two Transams and a Mask Vibe used for targeting threadfin in the Brisbane River were recklessly chucked in a tray with other plastics. About a week later we were hitting the river again before work and as I went to rig up… and all three lures had ‘melted’ together with an Old Bayside 5” Shadlyn, which was the contaminant that started the ugly process.

I was super sad to find out that my actions had caused cross contamination and the destruction of three rather expensive soft vibes. It wasn’t the lures’ fault, or the supplier’s, it was just my sheer laziness and lack of knowledge. I immediately bought some replacements and still have them to this day.

I remember telling the Jackall importer Harry about the mess a couple of years later and having a laugh about it after I eventually got over it, but I remembered that lesson well.

More recently I noticed some spinnerbait skirts had started to come away from the head. The rubber collar had deteriorated. Again I was saddened but had a chat to one of the spinnerbait makers and discovered that the plastic trailers often added to the lures could, over time, interact with the collar and cause it to expand and eventually break.

I looked through my spinnerbaits, especially those that I had put TPE trailers on and discovered potential disaster. Most of them had collars that were about to break or had already broken.

I then looked at some bass jigs that I had put ZMan CrawZ trailers on and exactly the same thing was happening. I had a chat to Glen at Bassman and he suggested I remove all the trailers on the bass jigs, only adding them when I was about to use the lure. He also said it was much harder with spinnerbaits, but most of the makers these days were aware of the issues and used trailer plastics that were fairly inert and did not react with the collars.

Even the more recent trend of swimbaits with soft tails and fins are impacted by this. I can tell you it’s a real heartbreak when a $75 swimbait comes out of the box with a cauliflower looking set of fins or tail! Yes, I’ve had this happen too.

Over the last 15 or so years I have learnt the hard lessons. These lessons are presented below so you can use them to ensure your valuable and sometimes expensive TPE lures don’t suffer the same fate that mine did. 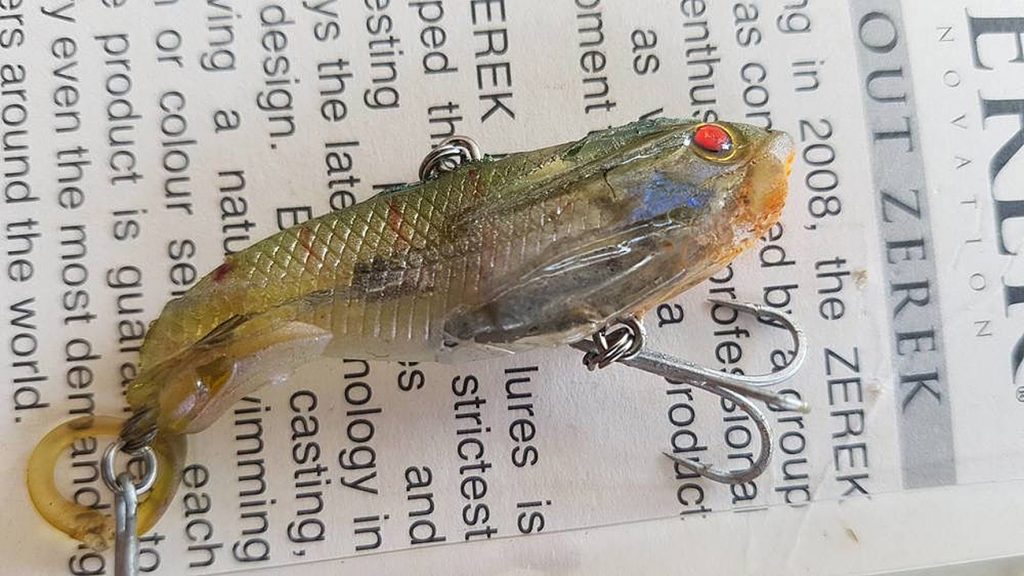 A classic destroyed lure from being stored in a tackle tray that was ‘dirty’ from other plastics. I’ve had much worse disasters and I bet a fish would still eat this one though! 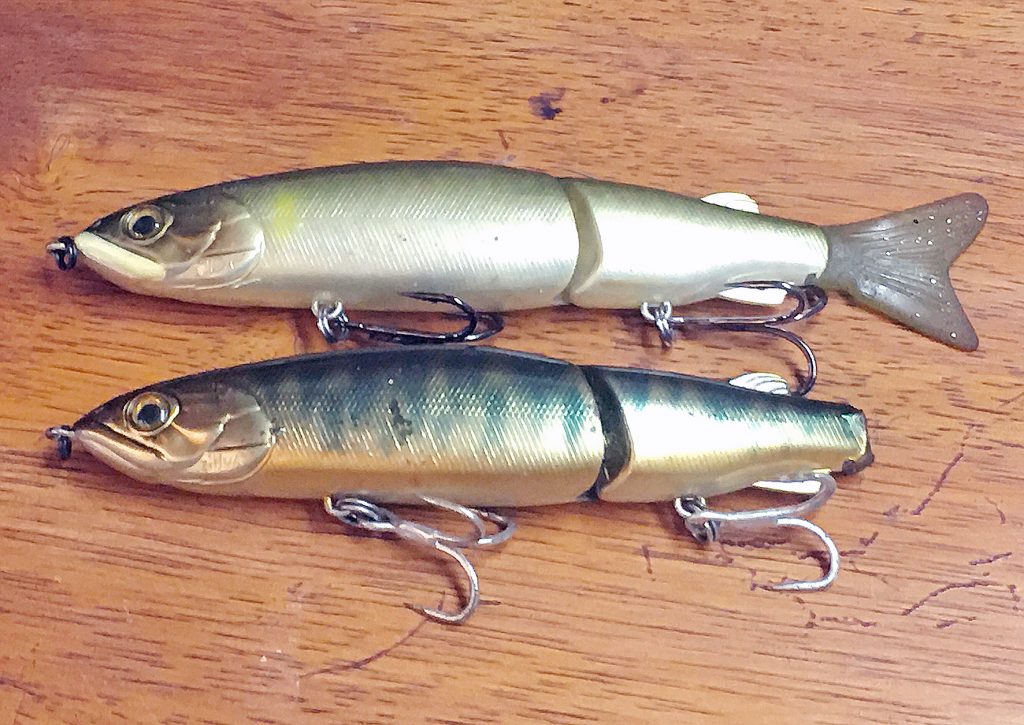 Two glide baits from the same box stored in different compartments. One compartment was infected with other plastics and the tail is now gone. These are around 10 years old when glide and swimbaits first started making an impact on the barra lakes, well before the cod anglers discovered them. 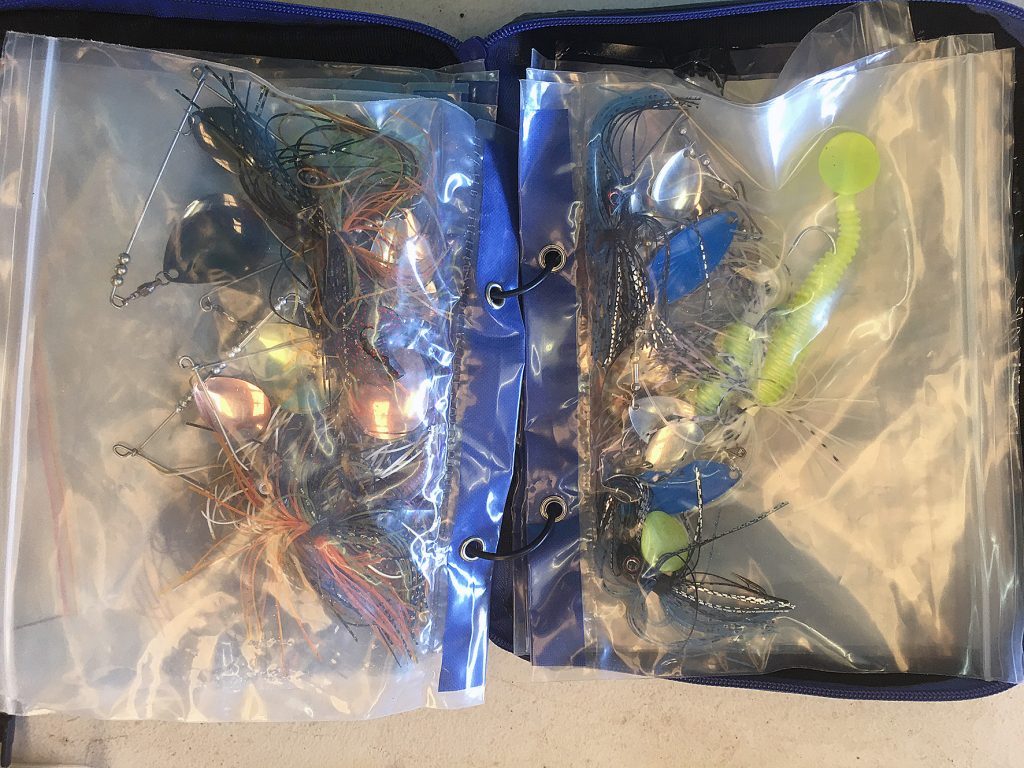 My spinnerbaits are more commonly stored in a worm-proof binder these days. Again, if you’re storing for any length of time, be cautious of the trailer plastics. 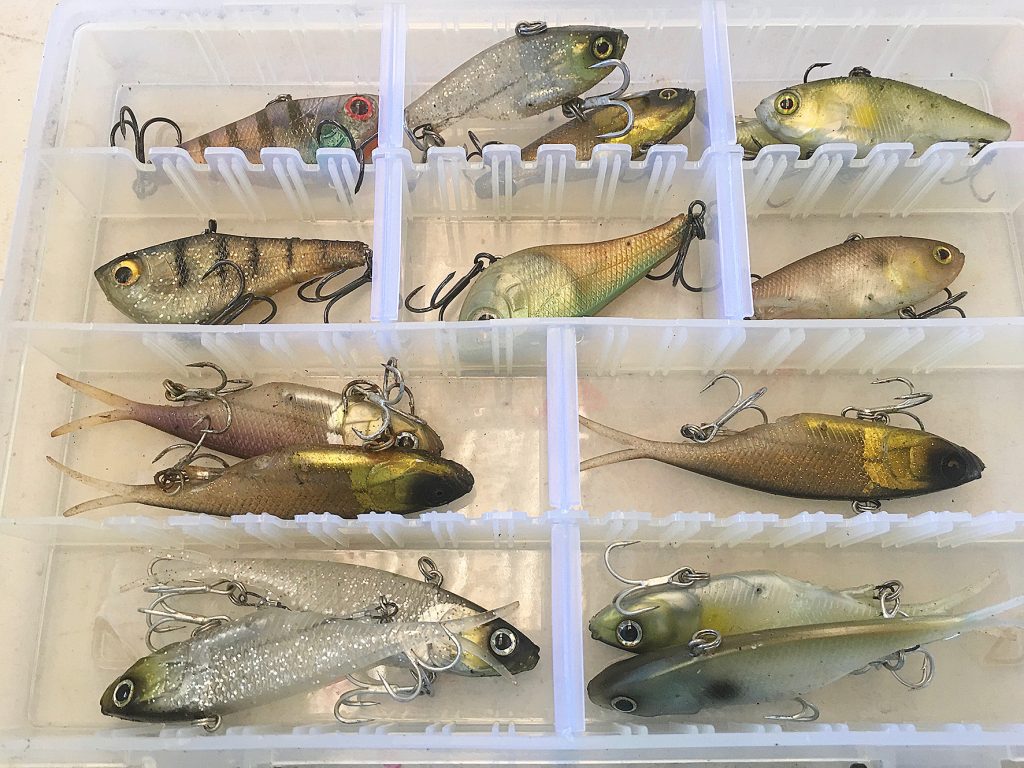 I find it best to store soft vibes from different manufacturers in individual, like for like, compartments. I’ve destroyed more than a few Lake Police Trans Ams in my time. These lures have been safe in this box for over 5 years! 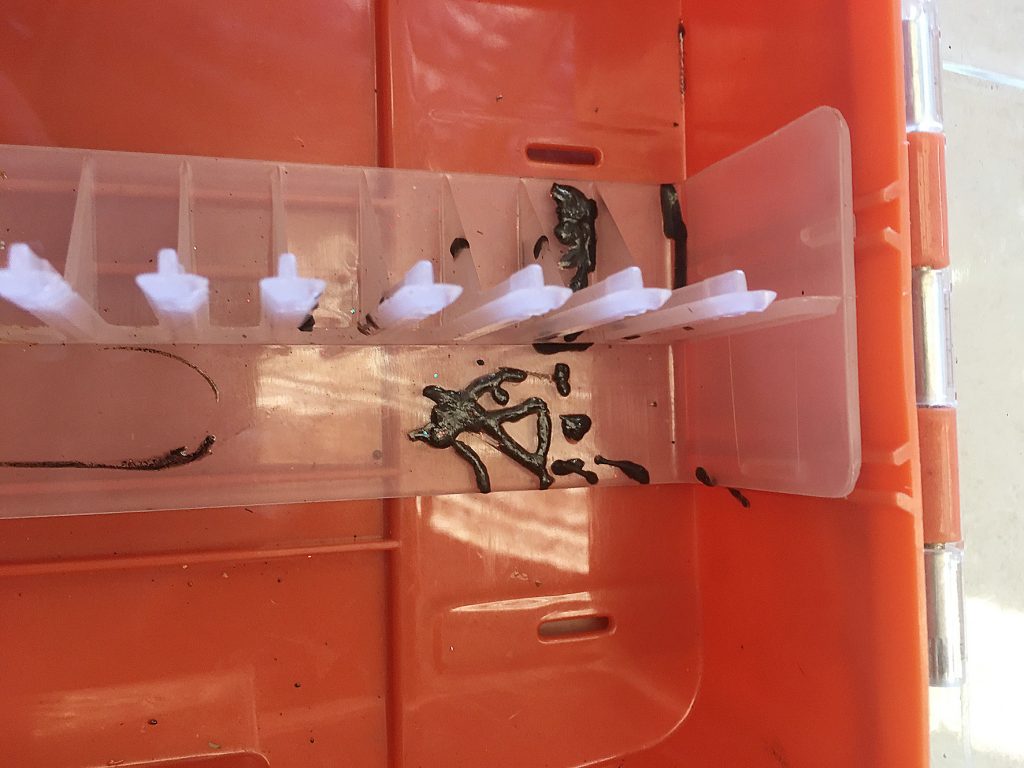 My spinnerbait box and the lesson is that plastic trailers can and do impact on the skirts and rubber skirt collars. You can easily re-skirt the spinnerbait but if you can avoid prolonged storage of spinnerbaits with trailer plastics, it’s a better option. 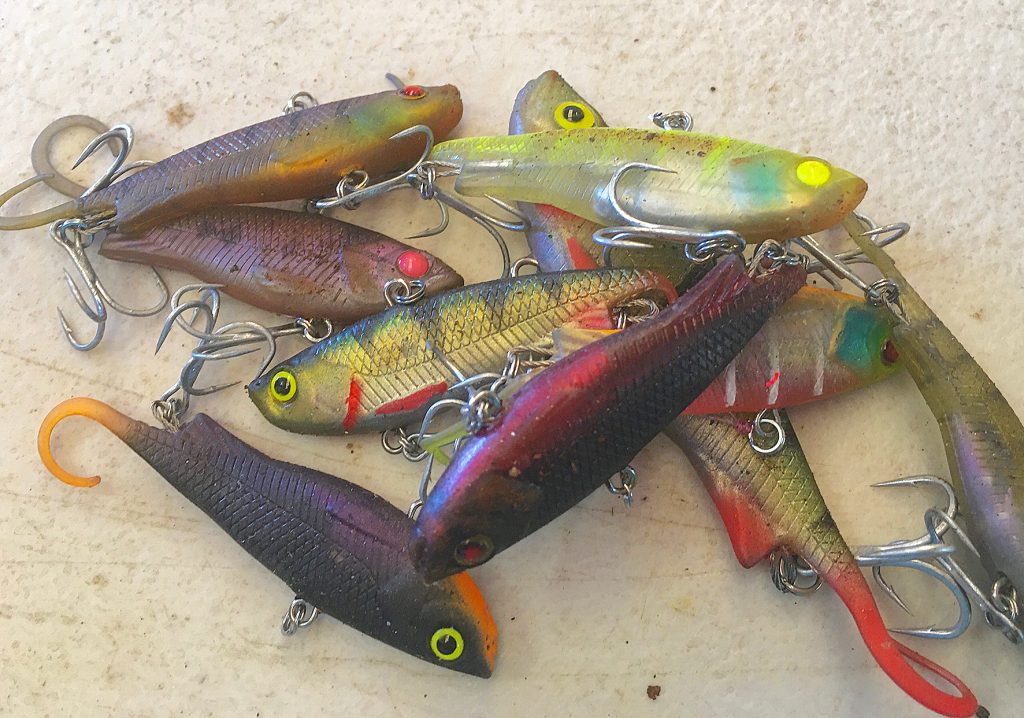 These Zerek Fish Traps have been stored together for over two years without any damage whatsoever to the plastic. Store like for like and you’re on the way to having safe and useable lures.

Use a worm proof tackle box/tray

These days, it’s difficult to find a tackle box or tray from any larger supplier that is not worm proof. You can still find cheap and nasty ones that are not, but if you stick with the larger names, you’ll be fine.

Worm proof tackle boxes were designed not to react with soft plastic materials and allow anglers to take plastics out of their sale bags and have them stored within tackle trays.

This is the single most important thing to ask if you are buying a tackle storage tray or box if you are planning on putting soft plastics in it, regardless of whether they are TPE or standard plastic.

If you are using an old box, do yourself and your plastics a favour and clean the box thoroughly to remove any residue from other branded plastics. This residue is a silent killer of new plastics and it takes surprisingly little ‘other’ plastic to melt your new plastics into a very unappealing blob.

This is the gremlin that got me and cost me half a dozen soft plastic vibes that were not cheap! It was not the fault of the lure, but the fault of the idiot who didn’t clean his box. You only ever do this once!

This is the biggest killer of plastics in modern times: storing unlike plastics together.

Plastics essentially hate one another and will refuse to play nicely together. Always keep plastics stored that are of the same type together and do not mix them up.

I will concede this takes up a lot of space and you may not have enough boxes to do this, but it is the only way I have found to be totally fool proof when it comes to storing plastics and avoiding disaster.

At work we have a plastic sandwich bag that has had about 30 Live Shrimps in it for at least the last five years. They are still in perfect condition as no contaminants were present when they went in.

If it is at all possible, or practical for that matter, storing your plastics in the sale container they came in is the best way to ensure your plastics never get destroyed by other plastics. It also means your plastics do not usually get bent out of shape.

This is a lesson from the early Gulp days which saw a lot of jigheads wasted because a dry, shrivelled-up Gulp was like a rock around the hook shaft. The lesson is easily transferable to TPE plastics, as the sale container is the single best place to keep your plastics if you can.

In many cases this can’t be done because the plastics are sold in a way that makes it impossible to do this. However, there are plastics that this can be done with easily, and an increasingly large number of trays and boxes are built to accommodate plastics in packaging.

Most petroleum-based soft plastics hate heat and can melt together, with colours running and creating some very interesting ‘new’ colours to use. Bio-baits such as Gulp are terrible in direct sunlight and heat. They expand and suck up all that lovely Gulp juice and become too soft to use – yep, I’ve done this too! However, if you can get them just warm enough and just a little bit expanded, well then you’re starting to talk about a good plastic!

TPE lures are not so dramatically impacted by heat, but it’s just a good idea to keep your plastic trays or bags out of direct sunlight such as on the deck of the boat or in your car. I haven’t had a TPE plastic destroyed by heat, but some of the people I have talked to say it’s an issue – one which can be easily avoided with a little care.

These are a few tips on keeping your plastics in good working order. If you have stored other plastics in a container I cannot guarantee there will not be damage done, even after you’ve washed it out.

The moral of the story is that plastics, particularly thermoplastics, should always be kept separated. Do this and your plastics will last you a very long time – or at least long enough to hook that monster!